You’re probably thinking Bob needs to get rid of this North Florida girl right about now…I mean, are we really talking about NASCAR on a street photography blog?! Well, I won’t lie to y’all, I did grow up around a bunch of NASCAR lovin’ people but just hear me out for a moment – there’s something to this. And if you, dear reader, happen to be a fan of both NASCAR and street photography, bless your heart, close that Craigslist > Used Car Parts tab and put down your copy of Auto Trader for a moment to hear about a photography exhibit you are not going to want to miss.

It’s called “Fast Lane: The NASCAR Photography of Darryl Moran.” Here’s a bit about Darryl from the Woodmere Art Museum website, which is where the event is being held:

“Speed, action, danger, corporate logos, pop icons—these are the defining elements of Darryl Moran’s stock car racing photographs. The first official photographer hired by NASCAR, Moran was responsible for capturing all aspects of the races. His images depict the frantic pace of race day as well as the camaraderie of the drivers, intimate moments with fans and family members, and the support and spirit of the pit crew. During his tenure, the self-taught artist captured such legendary drivers as Dale Earnhardt, Rusty Wallace, Jeff Gordon, Mark Martin, Terry Labonte, Tammy Jo Kirk, and Harry Gant.”

Speed, action, danger, corporate logos, pop icons…well now, sounds like a day on the street in NYC, doesn’t it? And who hasn’t taken advantage of a local event to head out and see if you can’t get a few good shots when the crowd pours in? I’m just saying, I think Darryl can teach us street photographers a thing or two. He had to look at one event from multiple perspectives, find singular moments during a fast-paced race, capture the feelings and the essence of race day in people as individuals and collectively. Take a look at this beaut for example: 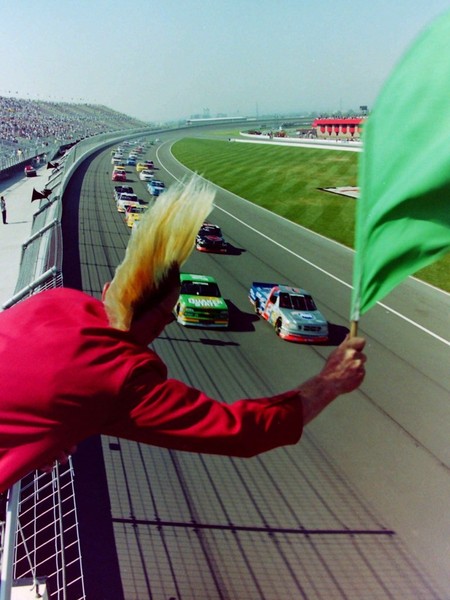 Call me crazy, but I think this exhibit is one worth checking out – even though you might have to travel from the deep south to Philidelphia to see it. Here’s the nitty gritty:

Click here to read more about the Fast Lane exhibit. And y’all come back now, ya hear?

« The July 2018 Issue of Street Photography Magazine is now available!
Model, Arbus and Solomon in “We Are the Subject” »