Actually, I stumbled across this project in my news feed by chance and couldn’t believe no reference to the official “Street Photography Genre” was made. But no worries, I’ll make it here. 😉 It was a random BuzzFeed article (You know, the news you read when you don’t want to read the serious news?) by Matt Stopera called,

These Pictures Of American Malls In The 1980s Are Actually Incredible

And guess what? The photos, taken by Michael Galinsky, were actually incredible. Just imagine, street photography genre, documentary style, candid shots of mall rats and non-mall rats alike shopping, hanging out, wearing huge hair sprayed bangs and mullets, playing arcade games, smoking indoors (*gasp*), checking out what’s new in Sears, grabbing ice cream at the food court. I mean, truly, what a piece of history! Galinsky says of the project, “In 1989, following in the footsteps of Frank, Winogrand, and Eggleston, I drove across the country and documented malls across America.” Um…epic, just epic. (Also, please excuse my BuzzFeed inspired colloquialisms, sometimes I indulge LOL) Ok, stop imagining and just take this baby in: 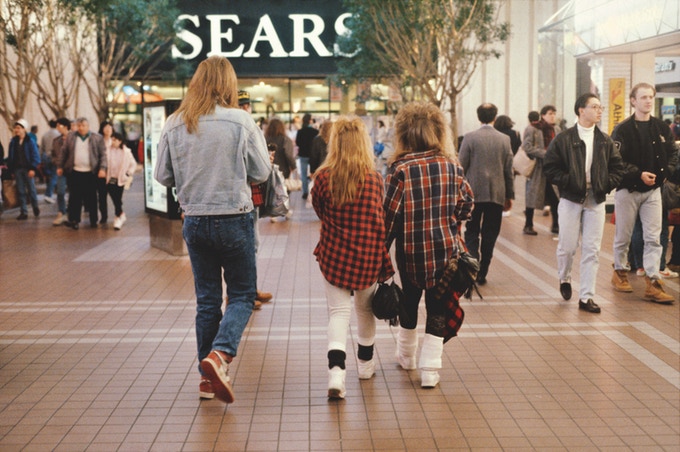 ©Michael Galinsky from the photobook Malls Across America

Yaaasssss. That hair! The trees! Brings my childhood flooding right back.

Galinsky revisited his photos years after he took them and decided their time had come. He created a Kickstarter campaign to print a photobook that was super successful and viola, a photobook called Malls Across America was born. A limited number of copies were printed and now the book goes for hundreds of dollars on Amazon.

Personally, I found it fascinating that Galinsky documented malls across America in their heyday, right when they were putting traditional downtown shops swiftly out of business, but his images went viral at a time when malls are pretty much on their way out. In honor of an era almost gone by, he’s put together a second photo book, which will be titled, The Decline of Mall Civilization. This book too will be funded by Kickstarter and promises to be just as epic as it’s hard-to-find predecessor, Malls Across America.

Check out the new campaign here and sign up to get your copy!