Here’s another interesting exhibit for you. The name Stanley Kubrick probably brings to mind filmmaker, not street photographer. Stanley Kubrick was the American screenwriter, director and producer behind a number of reknowned films including The Killing (1956), Dr. Strangelove (1964), 2001: A Space Odyssey (1968), The Shining (1980) and Eyes Wide Shut (1999). With good reason, filmmaking was Kubrick’s claim to fame. But did you know that before he made motion pictures, he was a street photographer? And this is what makes the Through a Different Lens exhibit so fascinating. If you are already a fan of Kubrick’s work (and a street photographer, because that’s why you’re here right?), it’ll make you love him even more. And if you weren’t a fan to start with, I’m sure you’ll see his films in a different light now. Here’s what the Museum of the City of New York has to say about the exhibit: 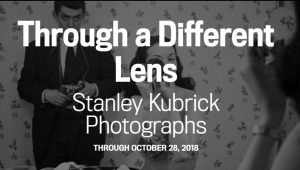 “Stanley Kubrick was just 17 when he sold his first photograph to the pictorial magazine “Look” in 1945. In his photographs, many unpublished, Kubrick trained the camera on his native city, drawing inspiration from the nightclubs, street scenes, and sporting events that made up his first assignments, and capturing the pathos of ordinary life with a sophistication that belied his young age. “Through a Different Lens: Stanley Kubrick Photographs” features more than 120 photographs by Kubrick from the Museum’s “Look Magazine” archive. For any fan of Kubrick’s films, the exhibition explores a formative phase in the career of one of the 20th century’s most renowned motion picture directors.”

And if you’re still not convinced…

The exhibit is already open but it runs until October 28, 2018, so there’s still plenty of time to catch it. Here’s the where and when:

Museum of the City of New York