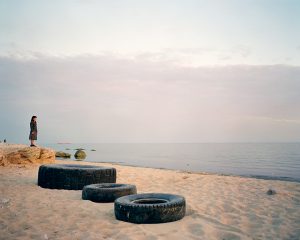 “Along the Shores of the Caspian. From Russia to Turmenistan, Chloe Dewe Mathews photographed the rituals and resources of a much-coveted territory. By Arnold Van Bruggen.”

It began with those words. Interesting, but not captivating. What followed however, grabbed my attention quicker than a knife fight in a phone booth. As soon as I began reading, I couldn’t stop. It was a fascinating, beautiful story that left me wondering about a place that had before been nothing but names on a map to me. Each image seemed to represent a strange yet somehow familiar place. Chloe’s images were intimate enough to make me feel like I was looking at my aunts, uncles and cousins, and yet I had never laid eyes on these new landscapes and rituals. It made me ask myself, “How can this globalized world where everything is just one Google search away still contain so many tucked away gems waiting to be discovered?” It made me happy.

After my initial excitement wore down, my editor’s eye kicked in. You see, Chloe’s images were fantastic. Just visit her website and you’ll see she is a very talented, accomplished photographer. However, I’m not sure her images alone would have made such a deep impression on me. You see, I’m not always a visual learner. The logophile in me wants words too and this story had the best of both worlds. Here’s an excerpt of the essay “Along the Shores of the Caspian” that accompanied Chloe’s images:

“Seas ignite wanderlust. A toe in the water is a connection to the opposite shore, even if it is miles away. As a child I used to stand on the North Sea beach and imagine Iceland on the horizon, taste the molecules from the Sargasso Sea, and feel the chill from the Arctic Ocean. In my imagination I saw the opal-blue waters of Fiji flecking the gray seas of the north. Here, on a beach in Iran, I wanted to go to Russia, to the fairy tales of Central Asia, and see how this sea influences the peoples on its shores. Chloe Dewe Mathews did just that and discovered that although the sea is relatively small, and its coasts might seem worlds apart, the countries are bound together.”

Just lovely, right? Interestingly, the essay was not written by Chloe. It was written by Arnold Van Bruggen. My point? Though I am unaware of Chloe’s motives for having someone else write this essay, many highly talented photographers are of the visual inclination and words are not their strong point. You may fear this could keep you from ever having your work published. If so, then take this essay as an inspiration and perhaps start thinking about a collaboration. Street photography can be a solitary endeavour but some of the greatest projects out there have come from collaborations. Just some food for thought if you have a story worth telling, but are struggling to get it out there.

See the rest of “Along the Shores of the Caspian” by following this link.