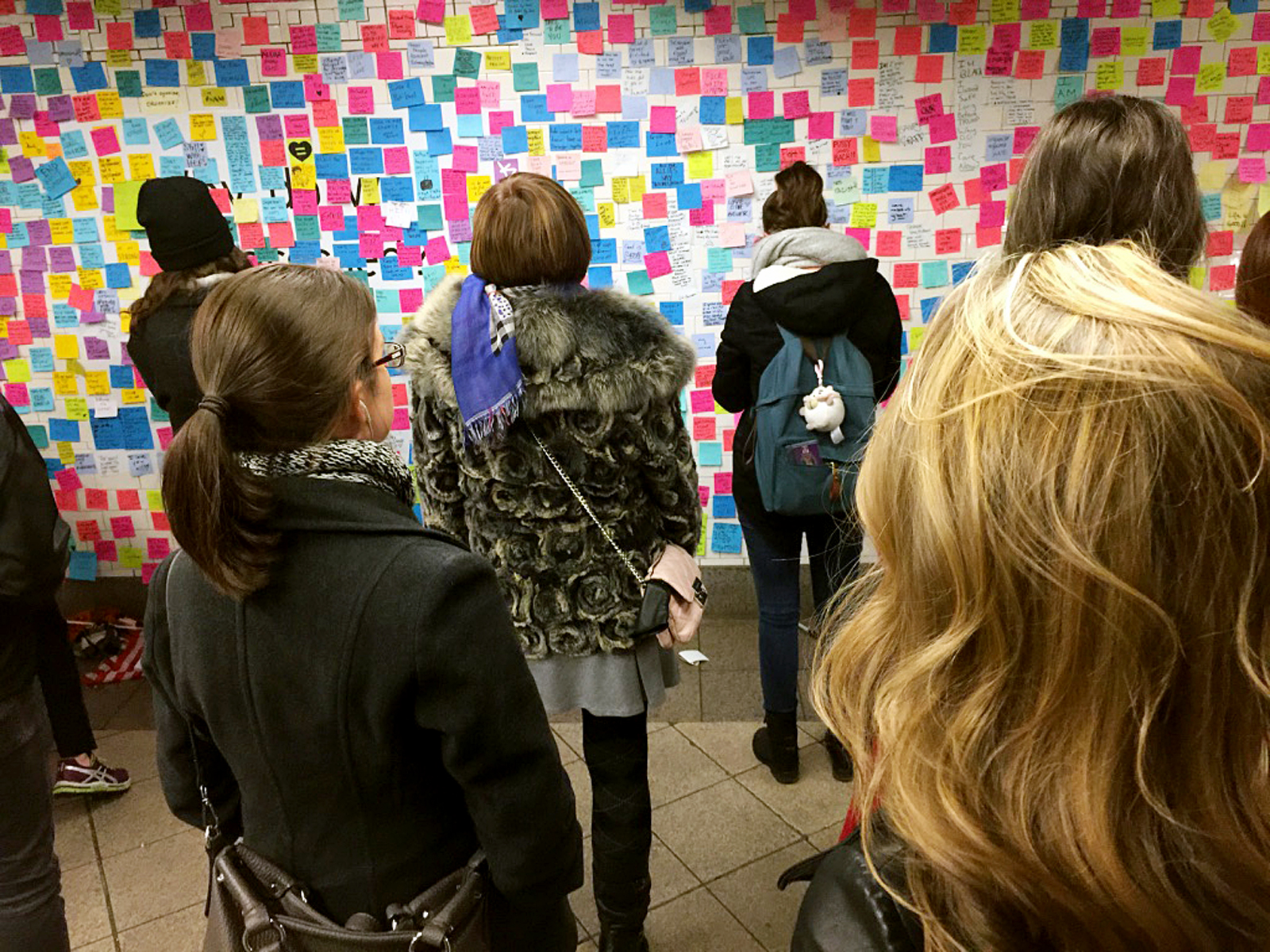 As an avid street photographer, I almost always take my camera with me. Whether it’s a quick errand or a day long adventure, I reach for my DSLR, making sure the battery is charged, and nestling it in my bag or pocket. My “wandering” eye rarely stops looking for decisive moments to record, knowing full well how they can appear and disappear quickly. My iPhone 6 Plus, although limited compared to a DSLR, can alternatively be a useful tool for taking photos. 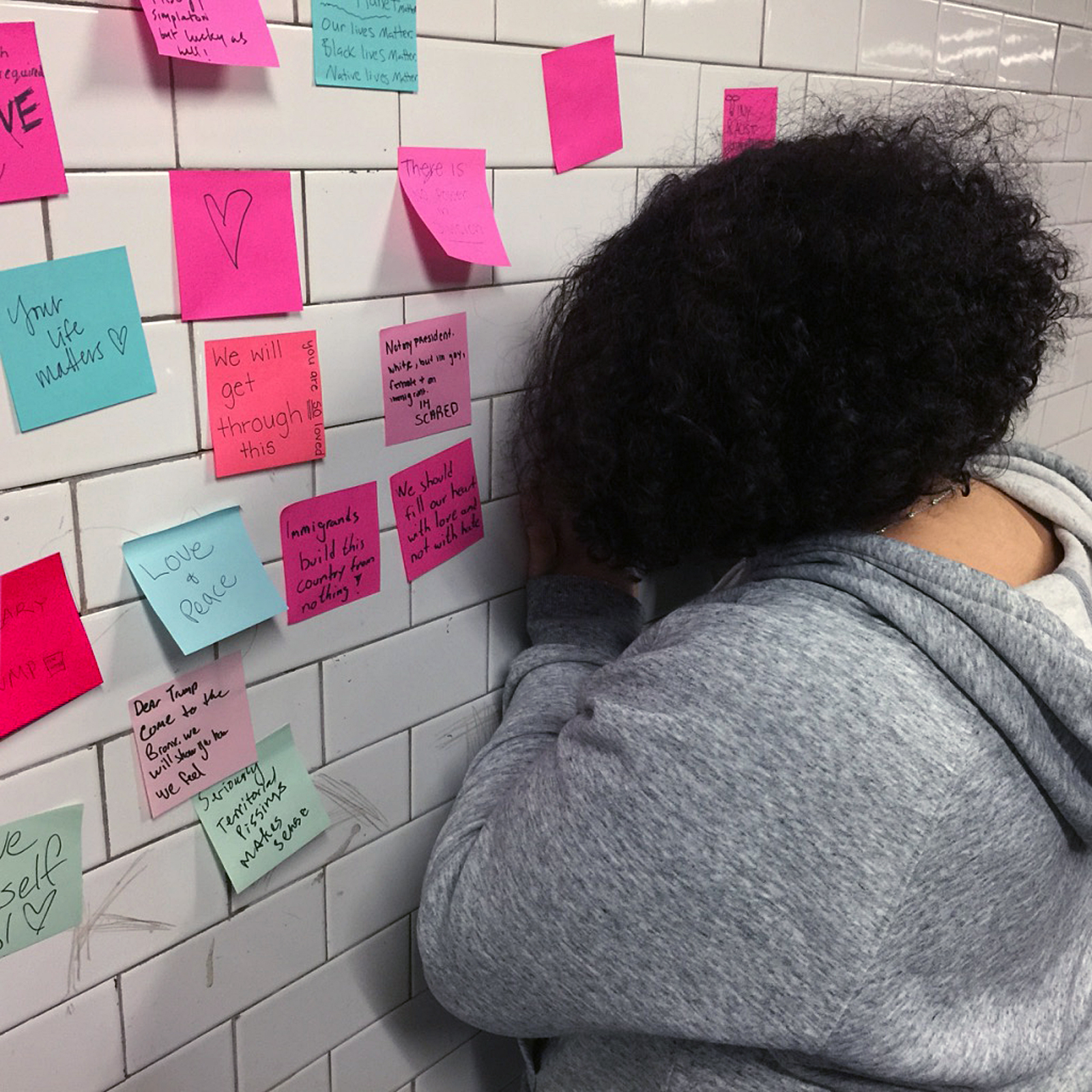 Three days after Donald Trump won the election, I was armed only with my cell phone camera, on the NYC subway with my daughter, on our way home from dinner uptown. Exiting the train in the 14th Street Union Square Station, we trekked through the pedestrian tunnel toward the street. My daughter spotted “Subway Therapy,” a white tiled wall filled with multi-colored Post-it notes that people had left, commenting on the unexpected and controversial election of Trump. 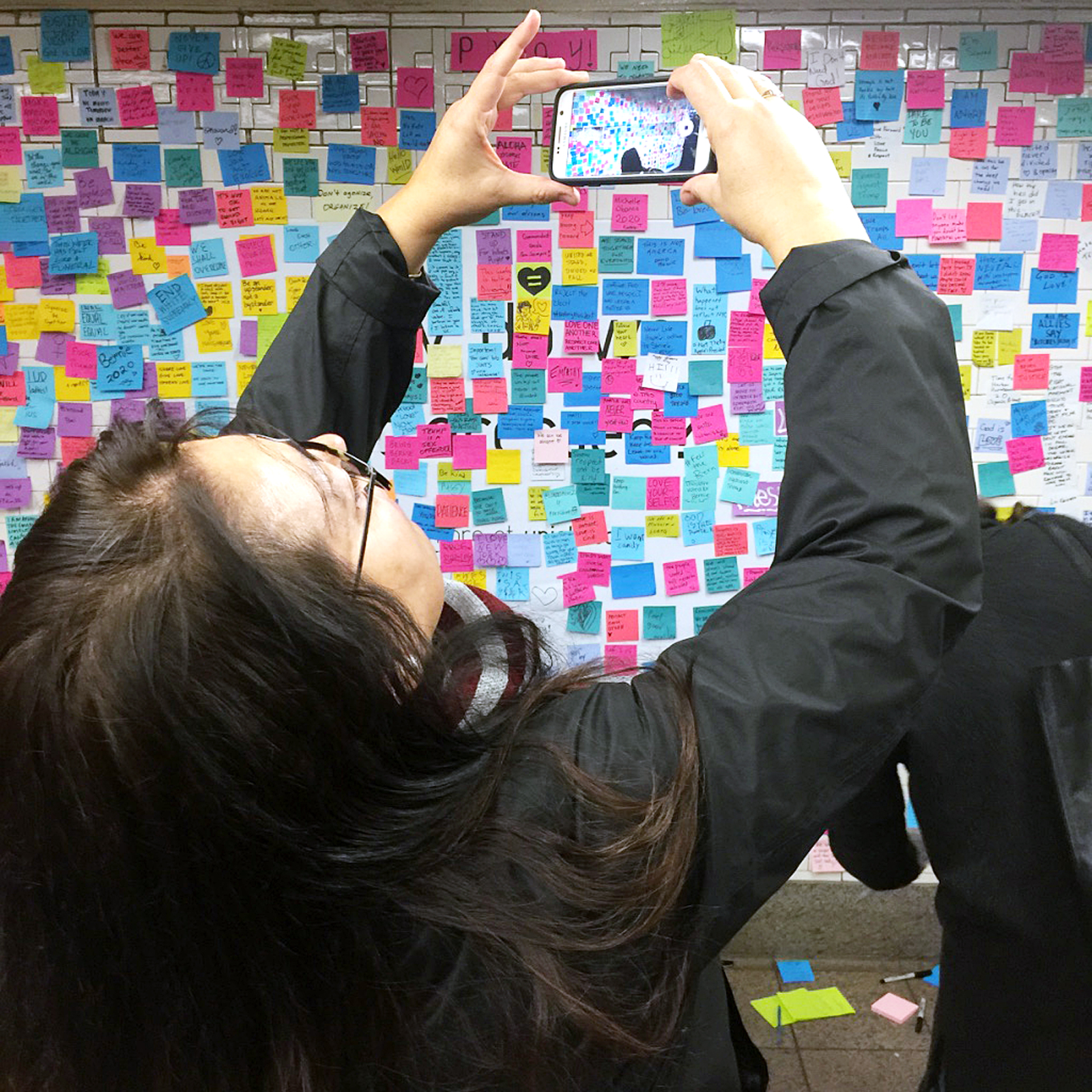 Blank forms and pens sat on the floor beneath the wall. A crowd of pedestrians three rows deep surrounded the wall, reading personal and political comments people had crafted. Some filled out blank note cards and placed them on the wall. Mesmerized, we watched this outpouring of expression. Comments ranged from “F**K Trump” and moral outrage to a few expressions of support. Other notes tended to be philosophical, or were brimming with satire and humor. 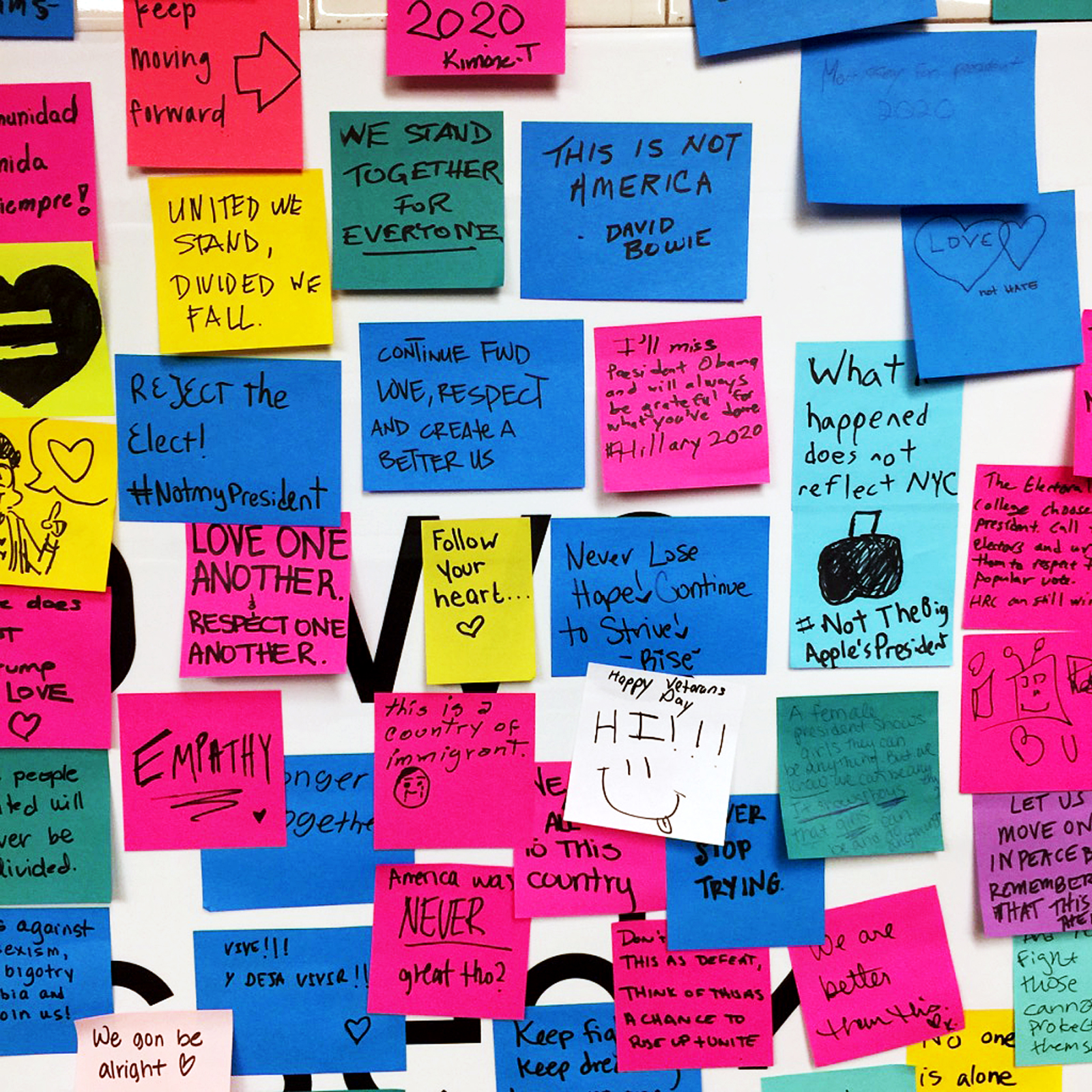 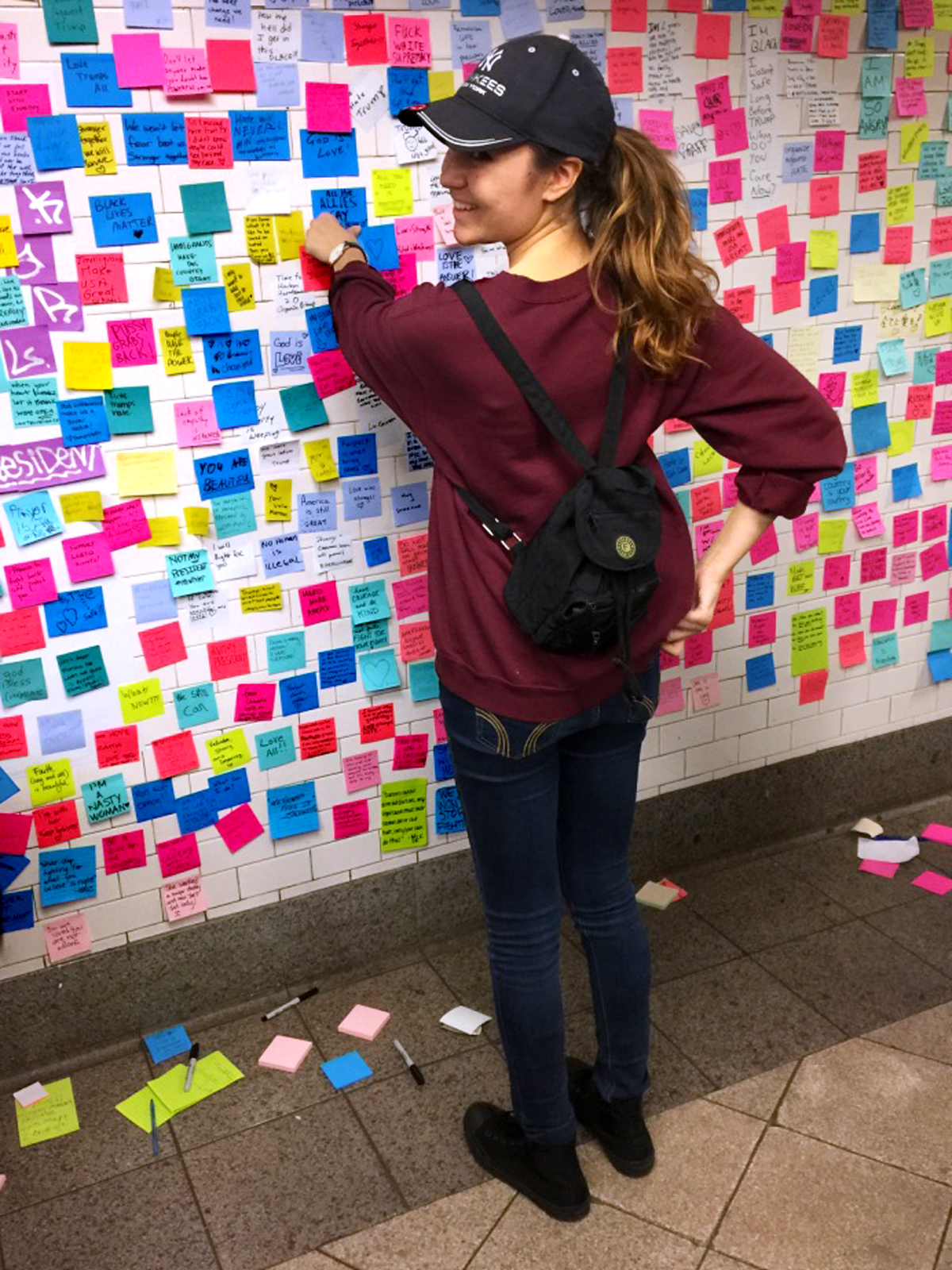 My daughter picked up a pen and began writing her own Post-its. I pulled out my camera like a true street photographer and began to document the event.