Lines. Lines can add depth and dimension to a photo, they can direct viewers’ eyes towards a point of interest, and they can lead them to the subject of the photo. Lines are important tools of composition and when you learn to use them to your advantage, you can create powerful, interesting images. Here are a few good examples, taken from some of the talented photographers who contribute to our Flickr group. Check ’em out: 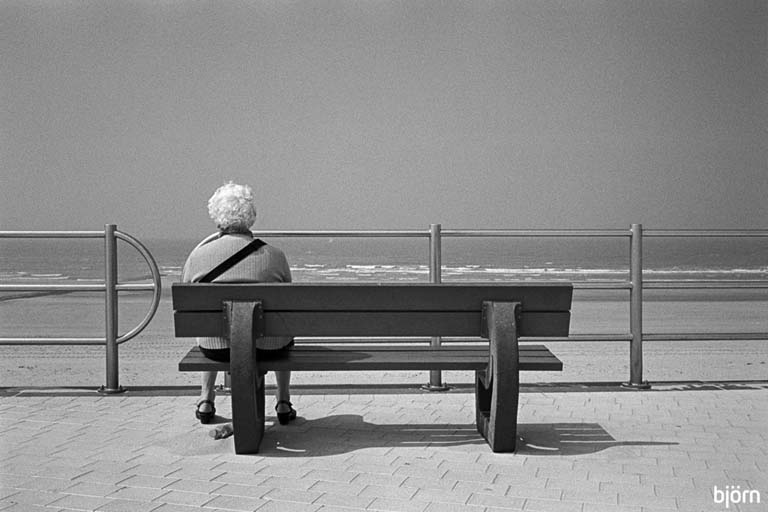 “The image was taken on a sunny day on a boardwalk along the Belgian coast. I was drawn to this solitary person gazing into the distance, seemingly reminiscing about days past. Her location on the side of the bench insinuating that she left space for someone else to sit next to her, someone who is no longer with her?

“I framed the image in such a way that the top horizontal of the fence coincides with the horizon creating calmness in the image. The abundance of horizontal lines draws the eye from left to right and are perpendicular to the gaze of the woman creating a nice visual tension.

“Finally the sterility and cleanliness of the image is a metaphor for the way we (in Belgium at least) tend to deal with elderly people, it also shows the loneliness that many older people feel.” – Bjorn Comhaire 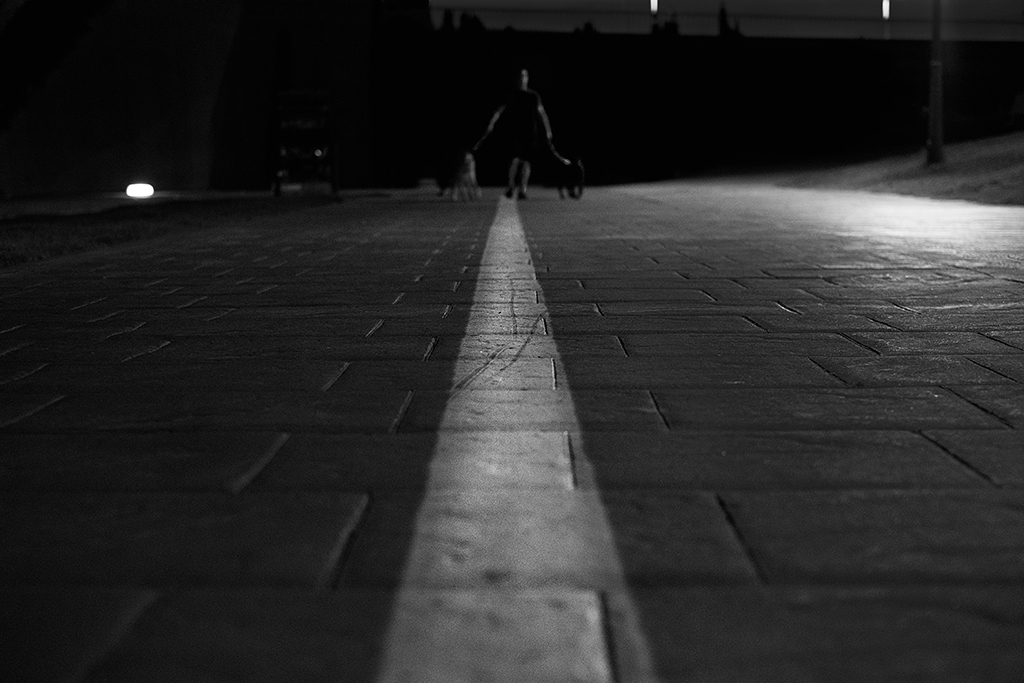 “This photo was taken in Valencia (Spain) about 10 pm with a Fujifilm X-PRO1 35mm f 1.4 – ISO 3200. I was looking for some interesting location that was illuminated by the light of a street lamp, and I discovered this white line (a bike path) that seemed to end in a dimly-lit wall, so I sat on the floor waiting for something interesting to happen. I thought a person or a bike might pass by, but instead a man appeared with two dogs and at just the right moment he stepped on the line I squeezed the trigger…” – Carlus 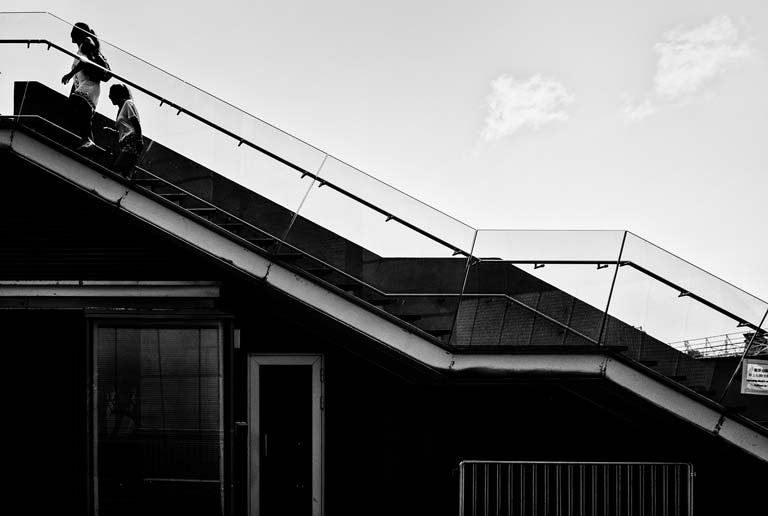 “It was a sunny day and as usual on that day I decide to have a walk with my camera. At first, I notice there are only one or two clouds in the sky and I look into the viewfinder and find two ladies also walking up, so I waited for them to parallel and horizontally took this picture with the sky.” – Kunotoro 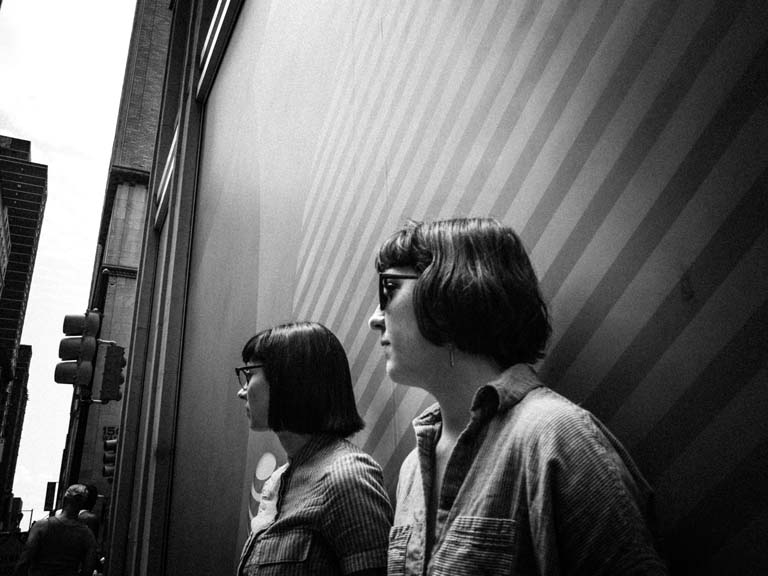 “This was made with the Olympus Pen F and 14mm (28mm) lens. I was using the tilt screen and that gives the look of a low angle. Maybe it looks like a hip shot but I haven’t done those in years.

“My instincts always make me use the camera at eye level so it’s a challenge to work from a low angle. Then after walking around, I saw these two woman across the street. Well, now the problem happens….. I start to immediately see my photo. I have to run across the street to get there. At 66, I ain’t running anywhere fast but I walked like a youngster to get there. I am now in do or die mode. My pulse rate is climbing, breathing fast but steady….eyes sharp as an eagle and my shaky hands, steady up…….I start to move slowly to the ladies that are enjoying their day without me bothering them. They are smiling, I am now just a few feet from them….dang it… I need to move to get the background to work and not cut too much out…..if the scene is flat, it won’t work.

“I moved in slowly like a ninja shooter and moved the screen just to frame the way I feel it….CLICK!” – Don Springer 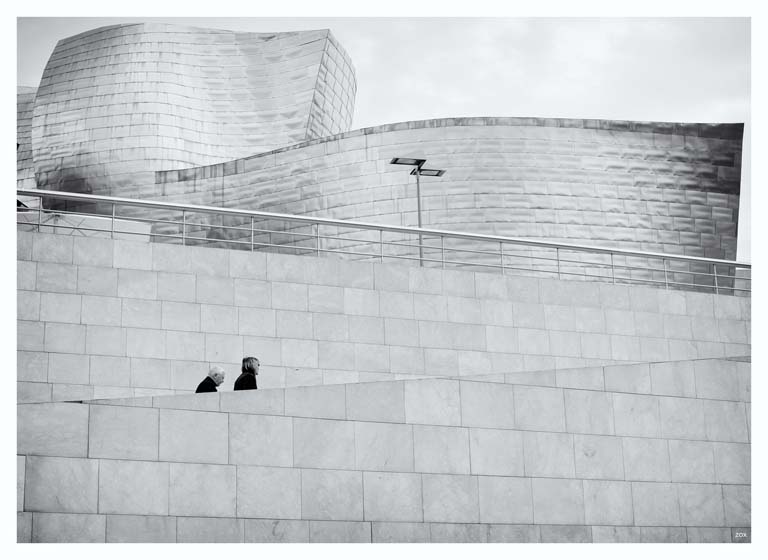 “These are side-stairs of Guggenheim Museum in Bilbao, it is always so crowded and in one moment just this couple (in dark clothes) was passing and I saw this photo with the combination of lines going up from left to right and the contrast of two. I like street photos, but when I have two or three seconds time, I like to compose. In this situation, I waited for the two to come to that specific point.” – Orlando Imperatore 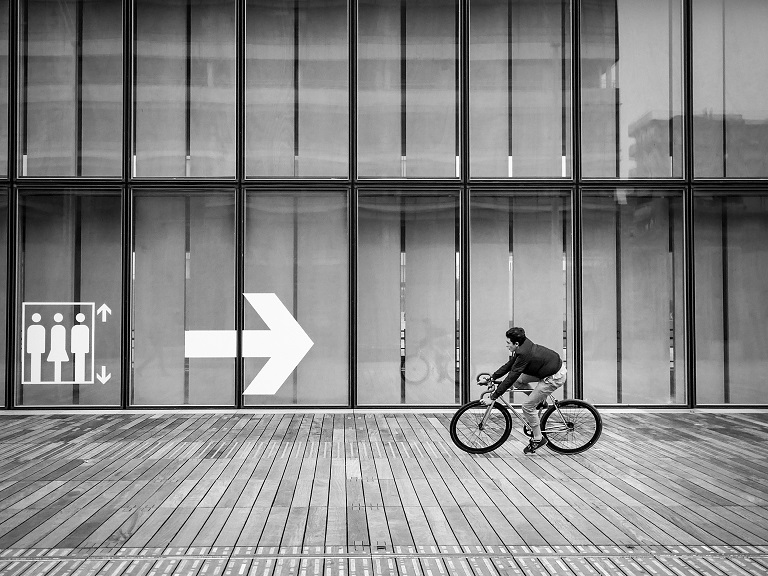 “This image was taken a few days ago at “Bibliothèque François Mitterand”, a famous place in Paris…a real street photographers’ spot.

“A few weeks ago, I noticed these lines and arrows. So I decided to come back here and wait for a “dynamic” character. I just waited two minutes and this “dynamic” biker came. Here, I appreciate the lines in every direction and the arrow showing the character in movement.” – MDH Photographie 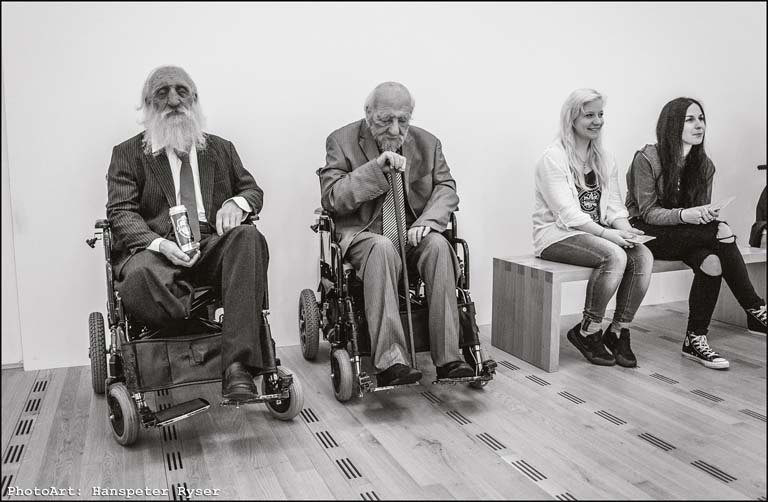 “I took this picture at an exhibition on Chinese art. It shows a part of an installation by a Chinese artist and two young women, looking at art. My thoughts were: The years that lie between the generations, the way there are young women still to come and how no one stands before the elderly anymore.” – Hanspeter Ryser 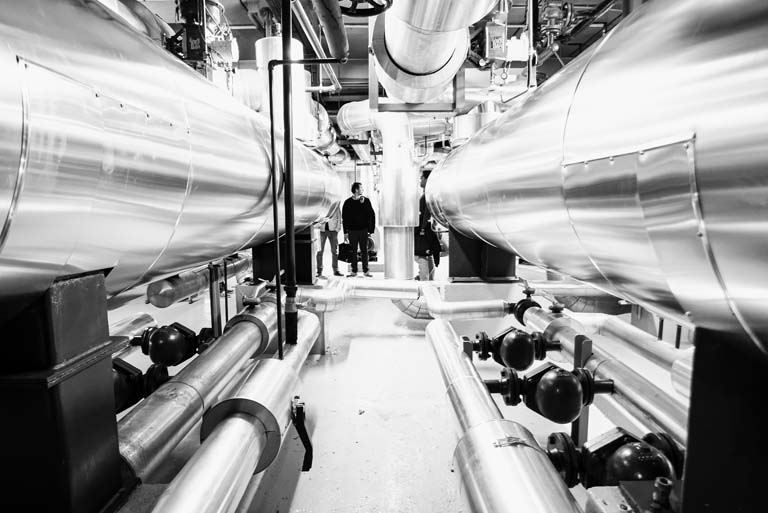 “This photo was taken during a visit of students in a district heating plant in Monaco . I was away from the group and attracted by the symmetry of the pipe, when the group passed before me. At this moment a student is captivated for a few seconds listening to the teacher. I waited for him to turn his head to shoot the picture.

“The perspective that the tubes create leading up to the character led my composition. 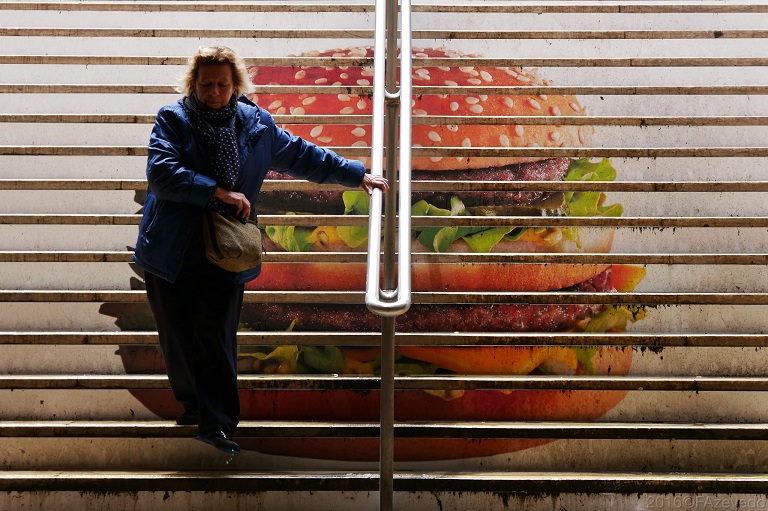 “This is an entrance to the subway. I saw this big hamburger striped on the stairs (a publicitary installation made very recently) and immediately it caught my attention. The light was nice (in Lisbon always is!) and it had rained until minutes ago. I’m not the kind of photographer capable of “waiting hours” for the proper moment. So I was about to leave when I saw this adorable old lady very carefully going down the stairs. Instantly I knew what I had to do. I bent myself a bit to gain the middle of the hamburger and transform those stairs in lines and took three shots. This is the one I like best.” – F Azevedo 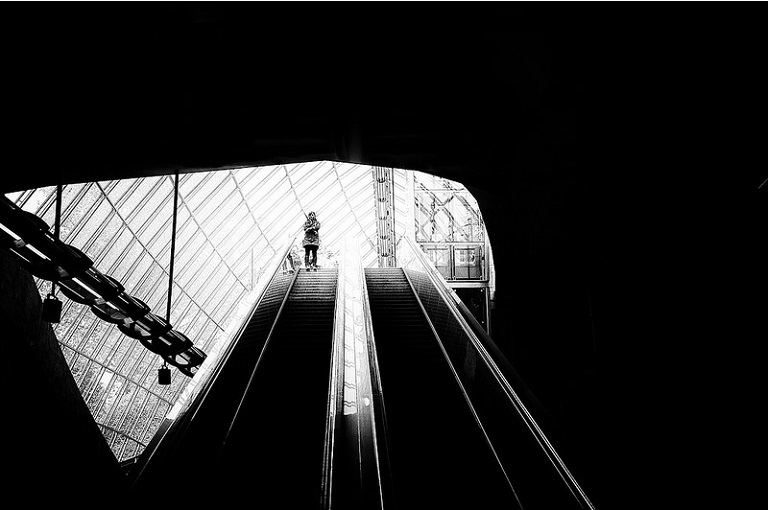 “The first shot I took was with a man on the right side, but I felt that he was too close to the empty space on the right side. So I waited until a person came down on the left side of the escalator. The escalator defines the vanishing point, that’s what helps to create an image.” – marcgraphie.de 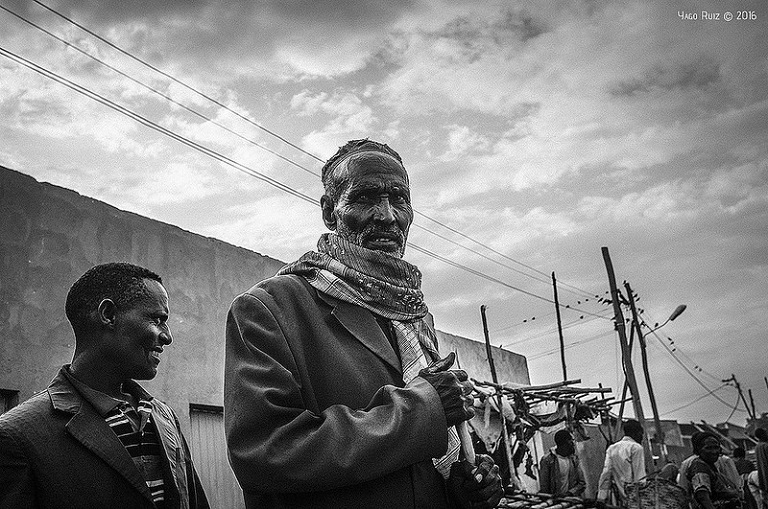 “In the moment of the shot I was in an Ethiopian market in the city of Zway. When I am very close to people sometimes I shoot from the hip to get a lower point of view. I use hyperfocal to ensure the focus and get sharp images. I try to anticipate the shot looking at the people around and trying to compose according to what I’m seeing in that moment. The shot was taken with a small Fuji X100, so it’s easy to compose even without looking through the viewfinder. I saw the old man in front of me and I got closer to him to get this point of view” – Yago Ruiz Photography