David Jackson is a UK native who ended up living in China thanks to one very unexpected chain of events. Though his interest in photography dates back to his earlier years, it wasn’t until he found himself living in a very foreign environment that he began to feel the need to document all the goings on around him more consistently. Since then, street photography has become a big part of his life.

During our conversation with David, we take a look at three of his early images. He has since upgraded his gear, but each of the images we reviewed were taken with the trusty little point and shoot (a Canon IXUS to be precise) he started out with. David has an excellent eye for interesting subjects and situations and we thoroughly enjoyed evaluating his work.

Click on the audio player below to hear a little more of David’s story and what Bob and I had to say about David’s images. 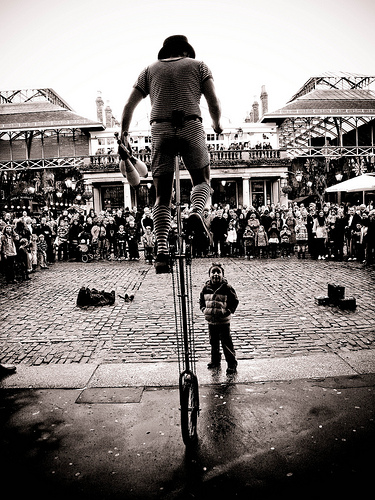 This shot is composed so nicely! Unicycle man is framed just right. The lines of his unicycle draw the eye upwards very naturally and the symmetry on either side of him draws attention to the image’s many layers, which begin in the dark area you are shooting from and then fold out to reveal the texture of the ground, the boy, the crowd, the buildings, the rooftops and finally the sky. The many layers are what really make this interesting to me. Even more so than the characters, though I do like them too. The height difference, and especially the boy’s stance (which looks almost challenging) tell a story of one of those brief connections you have with someone you don’t expect to connect with.

I find this image very interesting, it definitely draws my attention enough for me to take a second look. What could improve this image? I would say clarity. I think if you could make out the boy’s face and/or the faces in the crowd the story would shift from the boy to the performer. From the faces of others you could form an idea of the performer, which I think would make this image tell an even stronger story – one of a single individual as told by a crowd. In that case, I think it would be less about the artful layers and more about the human story. Generally, those stories make for the most powerful images.

I like the way the entertainer and boy are isolated in a triangle of light under the overhang in the foreground of the frame. It helps draw attention to them. However, the boy’s face is in shadow, so I think would help to burn it in a bit in post.

Also, I find my eyes begin to be drawn away from the subjects by the much lighter crowd in the background. I think darkening the crowd a little would help keep the viewer’s attention on the subjects. 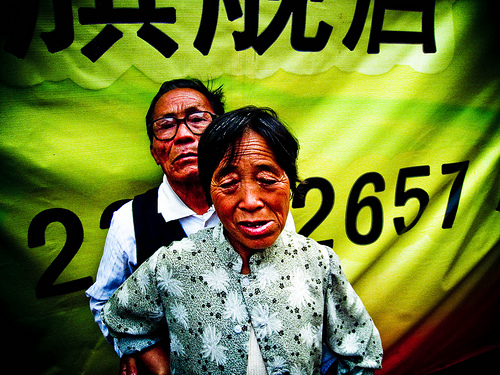 I love this image. It really draws me in because (1) I can’t really tell what is happening and (2) it looks very intimate, almost uncomfortably so and (3) the colors are amazing.

So, one by one in no certain order: The neon background really makes this image outstanding. It creates a contrast with the older people for some reason. Like the concepts of old and new clashing. I love that about it, it really creates tension.

The fact that I don’t really know what’s going on makes me look a little harder and longer. The position of your subjects and your proximity to them really make this shot though. You got close, and they seem to acknowledge you but at the same time seem to be so into one another that they don’t care that you are there – as if they were two teenagers – and they hold that intimate pose anyway. It’s very raw and very human. The story it tells me is that even as we age we continue to seek affection. Big “capturing the human element” points on this one.

I really like portraits of older people because their faces are so interesting. This one is no exception.

Their expressions really draw me in and make me wonder what their lives are like. I also like the fact that the man is looking at you while the lady is off in her own world.

The bright green background makes it even more interesting due to the contrast it creates.

This is my favorite of the group. 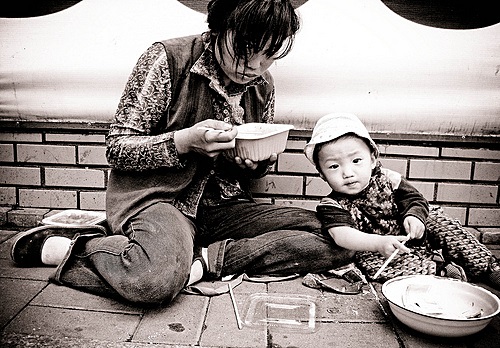 So this image definitely tells a story, but it’s an uncomfortable truth I guess you could say, which makes for a touchy subject.

What I like is the contrast between the woman and the baby. There’s harmony between them because of their shared situation but also since they seem to be leaning in towards one another, but at the same time, their gazes immediately convey a sense of the huge gap between innocence and maybe cynicism, hope and weariness.

That’s a powerful story, but it’s a hard one to tell without giving the viewer a feeling that you may have stripped the dignity from a person who needs it the more than most. I think that could be a problem with this image, despite the good documentary and story-telling facets.

At first I didn’t think much about this one as on the surface it appears to be another photo of unfortunate street people. But unlike many photos that grab your attention as a thumbnail, this one requires closer study which will pays benefits to the viewer.

The triangles formed by the woman’s sitting position make for a pleasing composition while the child’s expression draws you in.

In China (and just about every place else) you see many people like this on the street. We tend to look the other way as we go about our business. But your photo gives us an opportunity to take a closer look, in comfort of our homes, to see these people as fellow human beings.