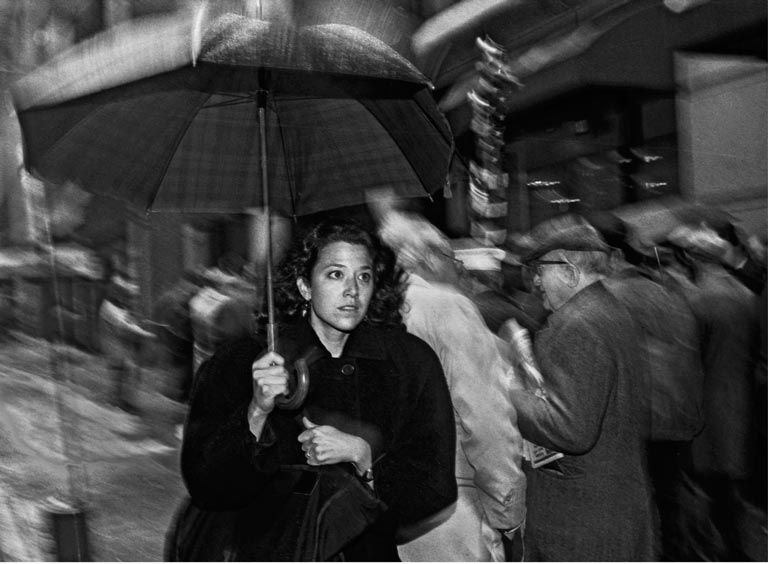 Portrait of a Woman with Umbrella , 1993 ©Harvey Stein

This is the third in his series of books about New York City. The first, Coney Island 40 Years (Schiffer Publishing, 2011), documents his ongoing fascination with the eccentric and exuberant aspects of this famous Brooklyn beach community. The second title, Harlem Street Portraits (Schiffer Publishing, 2013), is a series of more formalized environmental portraits of the people who live in this historically significant African American neighborhood.

In Briefly Seen, Harvey turns his lens on some of the most densely populated areas of the city — midtown and downtown Manhattan. He says “I photograph the packed and pulsating streets during peak hours of activity, day and night, to capture up close the theater of the everyday as it plays out on the streets. To heighten the feeling of movement, anxiety, and vigor, I employ a myriad of photographic techniques that bring to the work a complexity that makes Briefly Seen an evocative experience. I use grain, blur, low-angle flash, double exposure, overlapping images, skewed perspectives, tight cropping, and extreme wide-angle views to sweep the viewer into the feeling of walking the streets of New York.”

The style of these photographs is radically different from the other two books in the trilogy in that they are mostly candid and of crowds close up, not formal portraits of people on the street.

If you’re in the New York area don’t miss Harvey’s launch event for the book, a talk with Marilyn Kushner and book signing at the beautiful new Rizzoli Book Store at 26th Street and Broadway on Monday, November 16th, 5:30-7:30PM.

The book is now available through Amazon, Schiffer Books or your local bookseller.