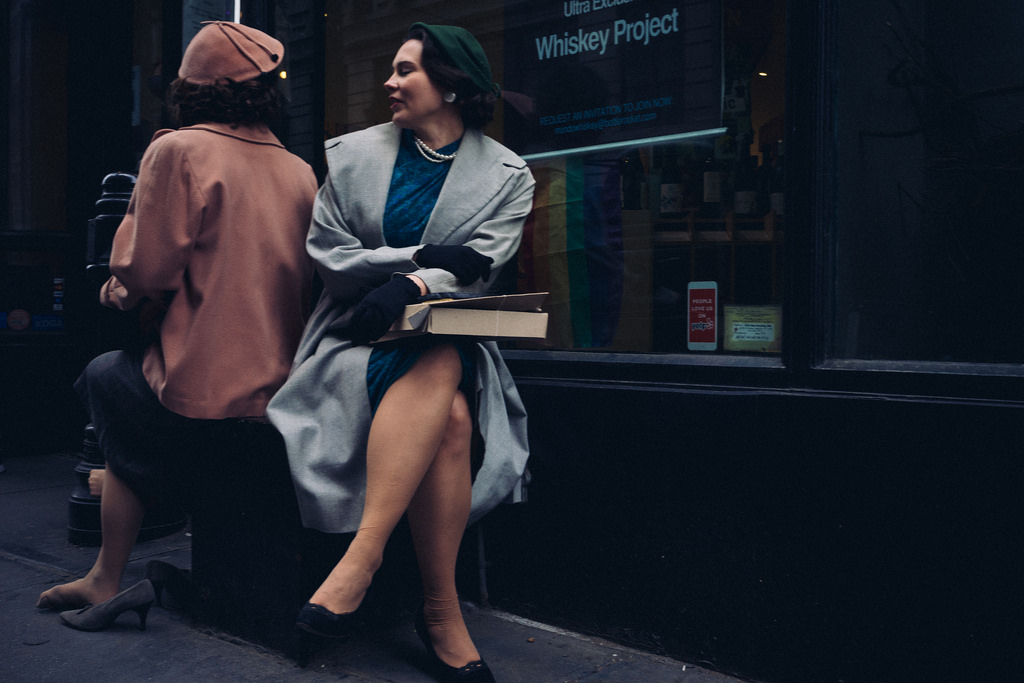 Friends Will Be Friends

I was born and raised in Florence, Italy, but I moved to Los Angeles where I picked up photography in the early 80’s. I took extension classes at UCLA and started street photography because I needed to find a way to connect with the city, a way to escape loneliness rather than a real passion for photography itself. 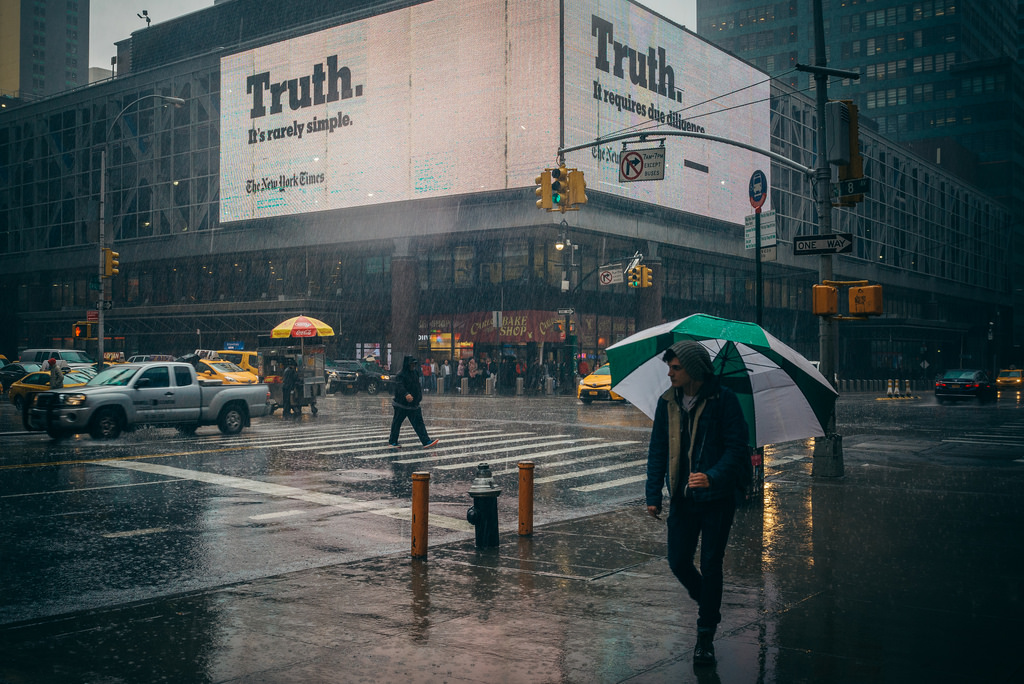 What would you say are the pros/cons of shooting in NYC?

There are no cons about shooting in NYC, New York is a dream come true for street photographers. Every season the city changes, extreme weather conditions are an excellent excuse to find something stimulating. City of lights with its constant flow of people, I would dare say that if there was a capital of street photography, NYC would be it. New York is like a constant movie set and it’s up to you to decide what kind of movie you want to shoot. 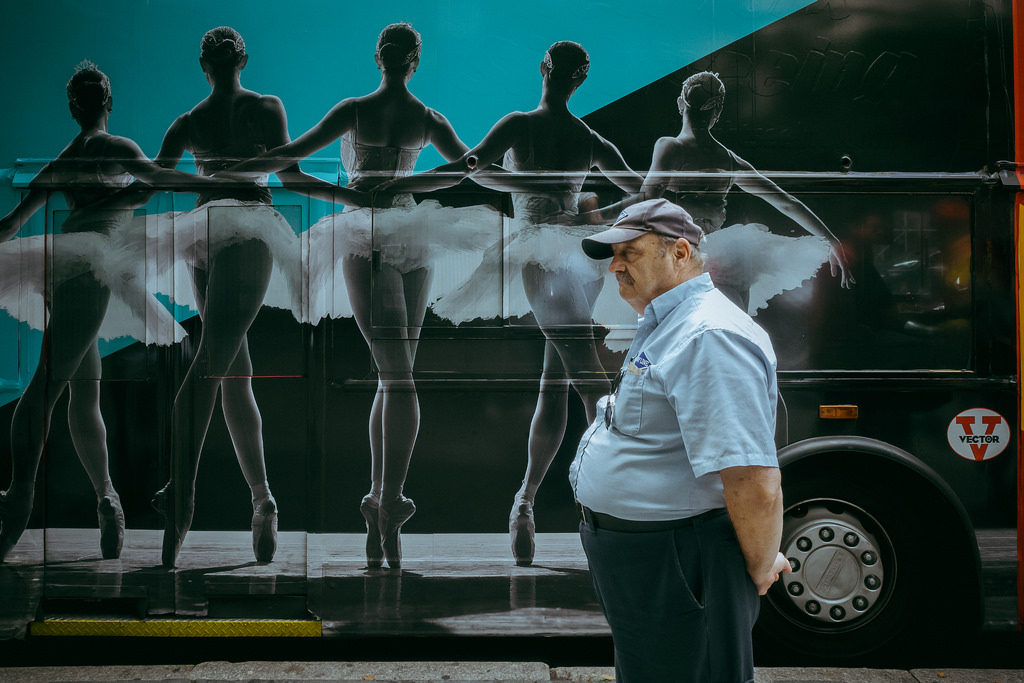 I love this image: 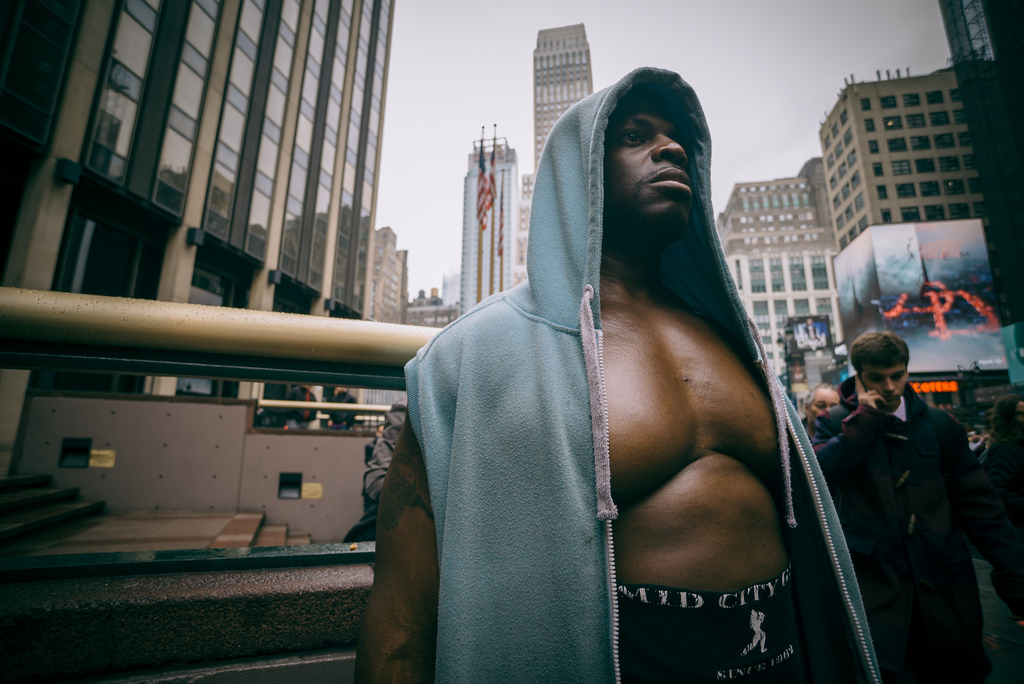 Can you tell us about it?

This picture was taken in Midtown Manhattan outside Penn Station. The man I took the picture of is witnessing the arrest by the police of another man in obvious state of distress for disorderly conduct. It’s hard to explain in words the emotional state of a situation especially when it involves the arrest of an african american by the police. In my opinion ‘the boxer’ with his presence and his gaze was making sure no wrongdoings or mishandling were about to take place. 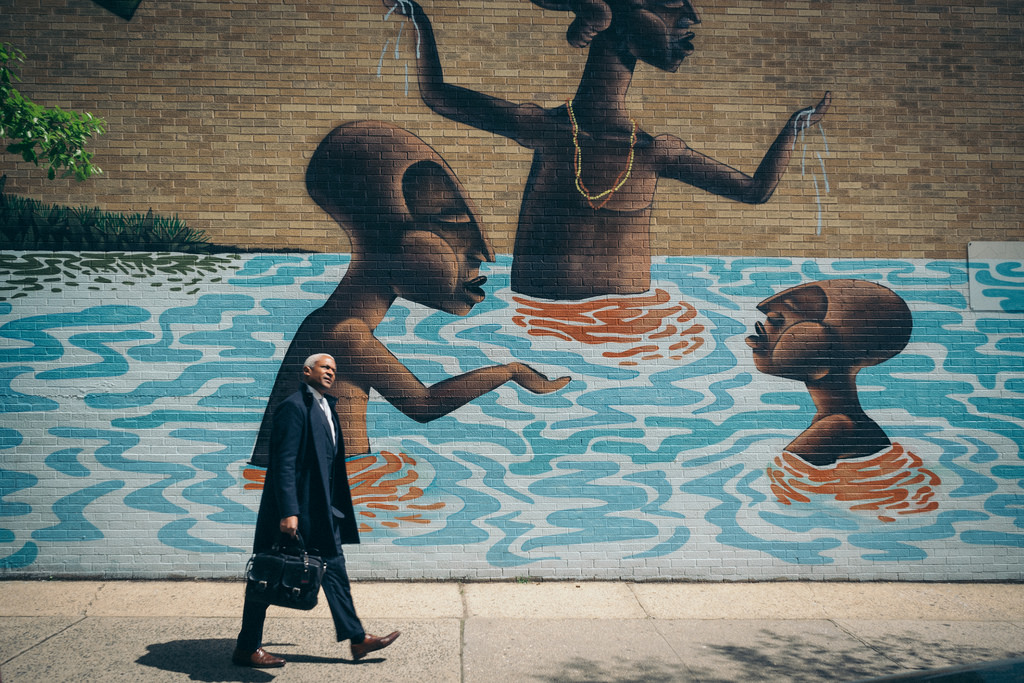 I feel like you incorporate a lot of street art and signage in your images, it gives them a really urban feel and often that classic NYC look. Do you plan images around such elements or are they just elements you include at random as you see them?

Blending people with street art like murales, graffiti and city signs has become one of my favorite goals while shooting the streets of New York. It didn’t happen casually or necessarily for aesthetic reasons, in fact it started with the need to take pictures of people without drawing to much attention to myself. There are still a lot of neighborhoods in New York where walking around taking pictures with an expensive camera is not welcomed by many that’s why I developed this strategy that later became a style. 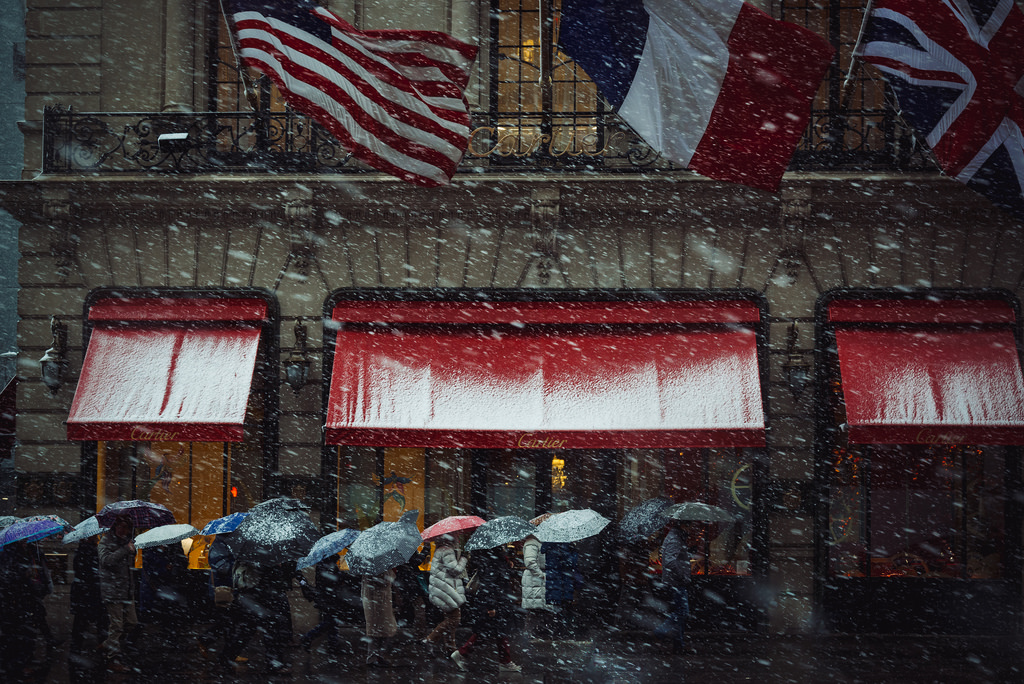 You are a master curator. The images on both your Flickr photostream and your website are so well chosen. What would you say is the key to curating your own work, choosing only your very best images and maintaining a visual flow to what you post?

This is a very interesting question and in my opinion is key to have your work noticed. I try to be extremely selective while editing my pictures, something I have learned by checking famous photographers portfolios. Over the years you learn which pictures better define your work but I try to limit the number to the very, very best ones. As for the most recent photos I rely also on the opinion of my followers on different social networks. Social networking is an excellent way to expose oneself. In the end, your instinct tells you which pictures should be kept and which ones should be deleted. I probably delete 99% of the images I take. 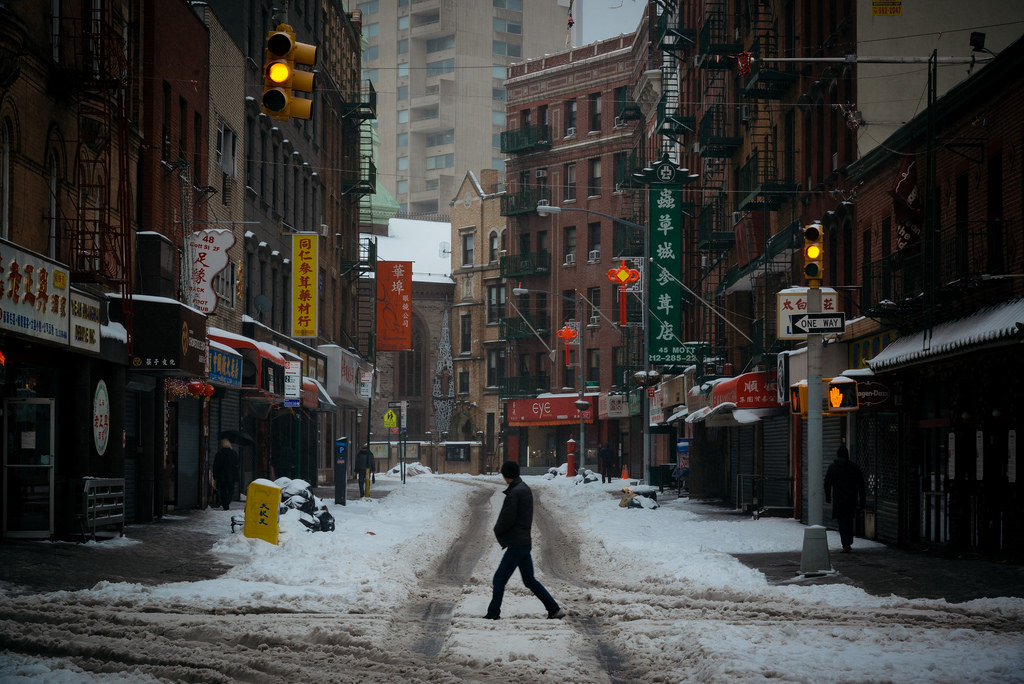 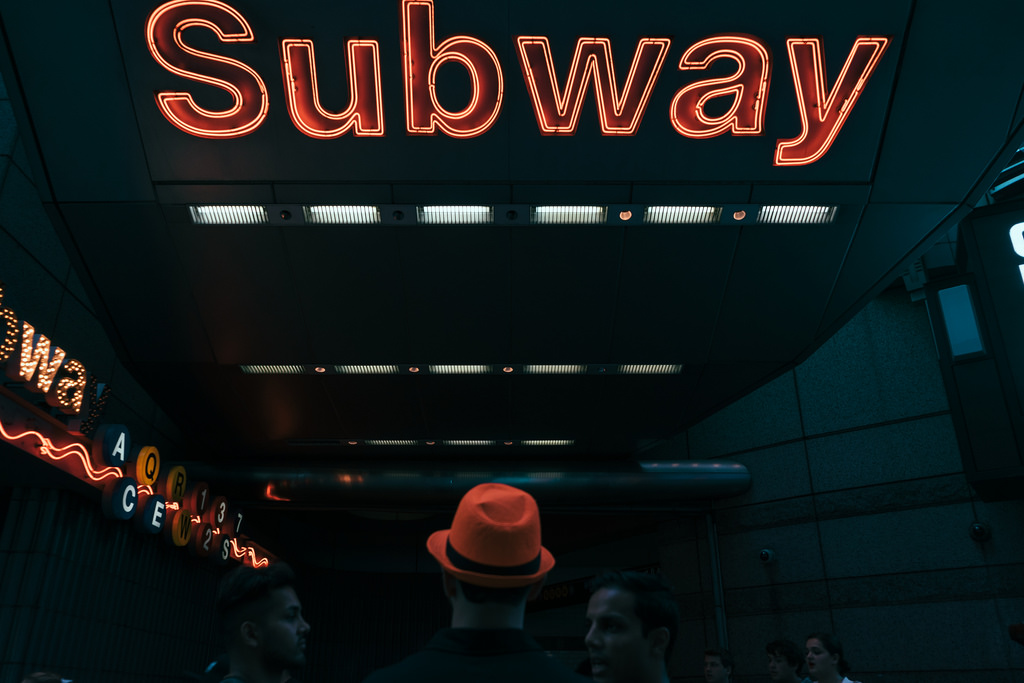