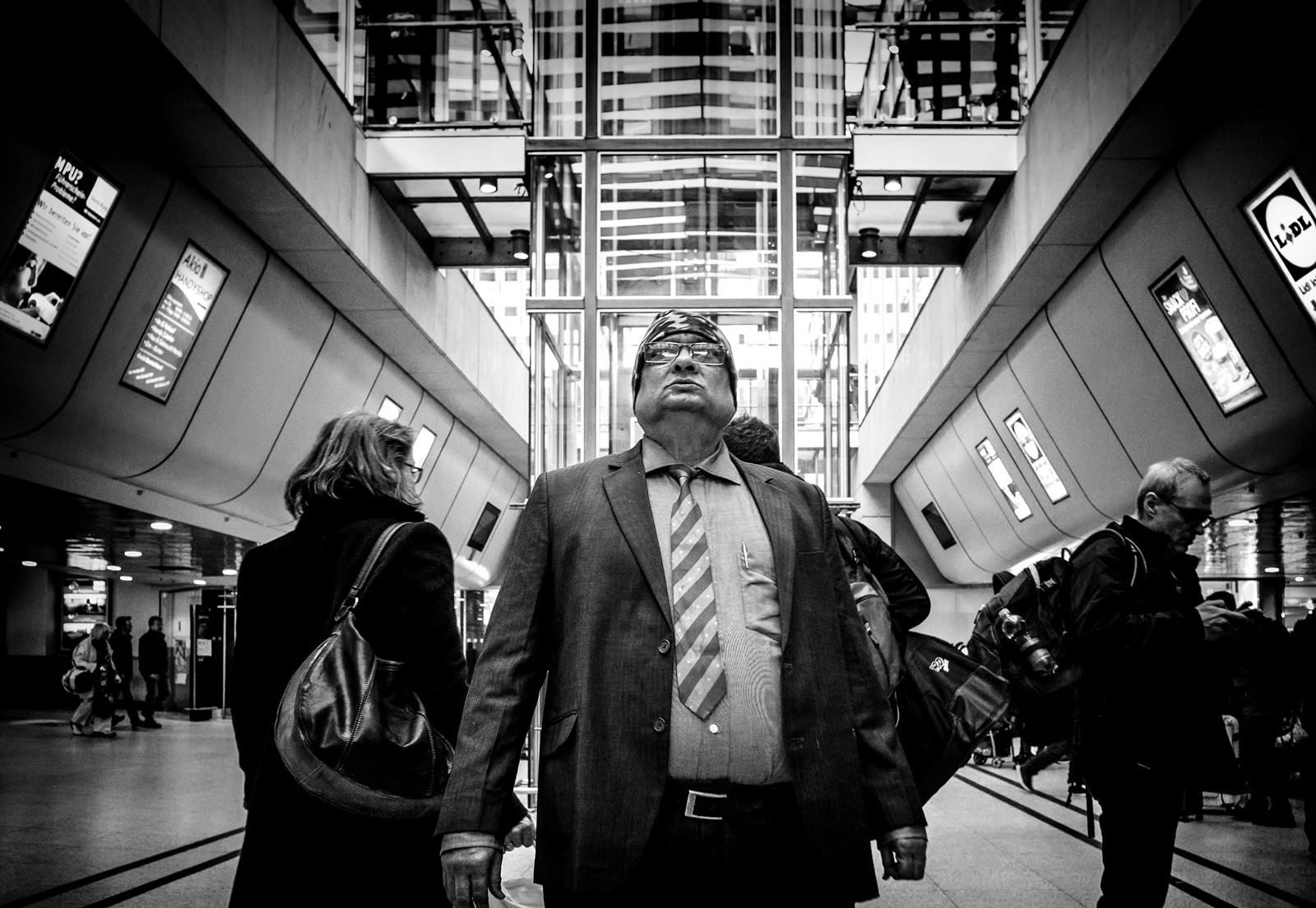 I joined Flickr in 2010 and at that time I wasn’t concentrating on any one specific genre, I just uploaded family snaps, images taken on holiday and the odd landscape photograph. 2010 was also the year I started to dabble in stock photography, which I still do to this day and enjoy very much. I watched loads of photography related videos on YouTube and basically taught myself how to use a camera.

Towards the end of 2013 I posted an image of miniature figures painting chocolate peanuts which caught the attention of another Flickr member, Just Ard, who left a comment on that said image. Unknown to me at that time, this was to be one of those life changing moments that you only realize a few years later.

I visited his photostream to see what he was photographing and I was intrigued by the fact that he was shooting people in the street. I actually though it was only journalists that done that kind of photography and I had no idea how popular a genre it was for many other people from all walks of life.

I commented on his work and sent him an email asking all about his street photography and how he goes about shooting people in public. Wayne replied to all my questions and in January 2014 I hit the streets of my local town with my newly purchased Fuji x20…..that is when street photography became my main genre of photography and over the years has now become more of a way of life for me rather than a hobby.

Sadly, Wayne passed away in November 2016, however in 2015 he did come up with the suggestion of setting up a street photography Flickr group. This in turn lead to our website, which keeps me busy, and is still going strong today with regular blog posts and monthly street photography features & challenges. 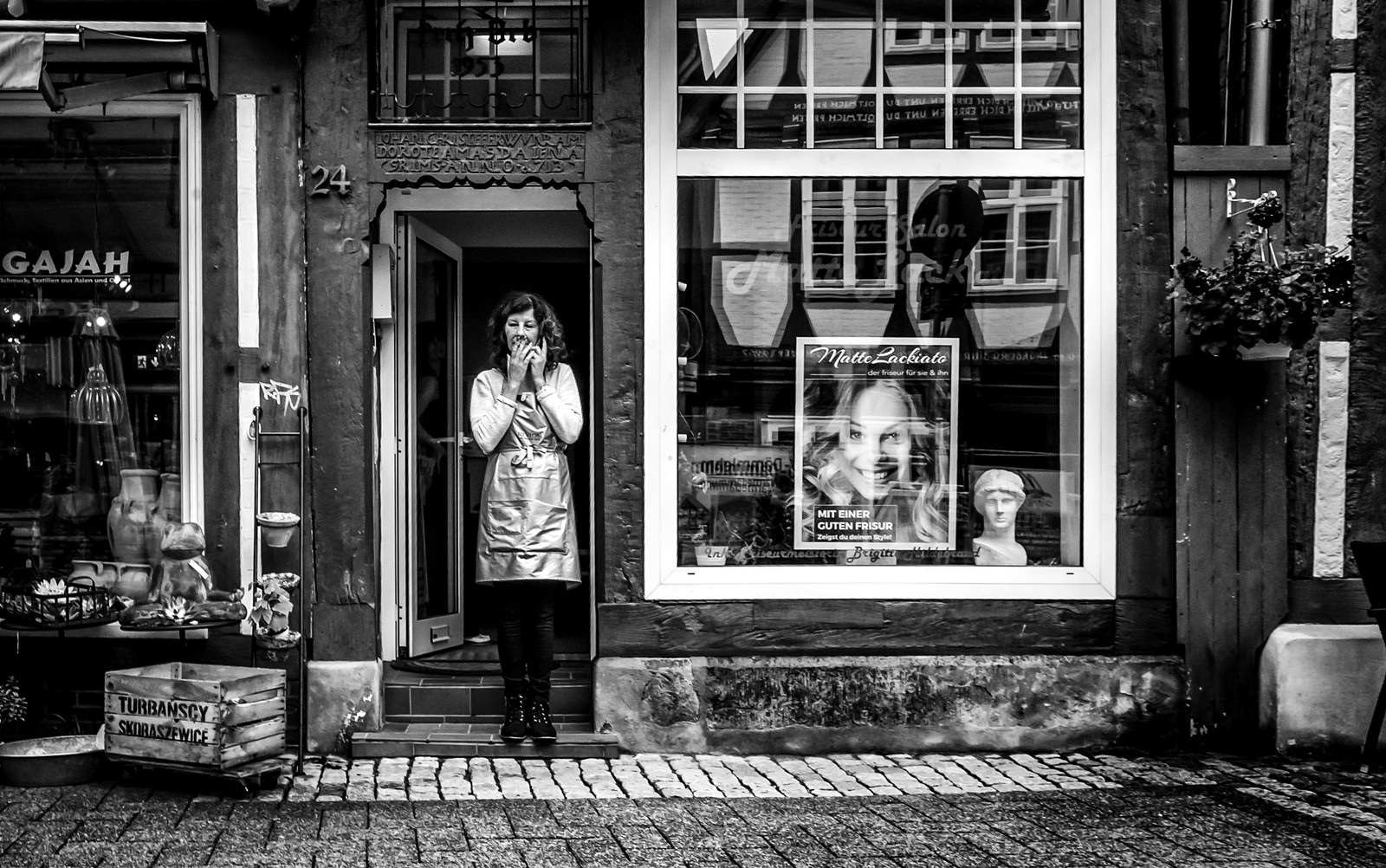 How would you describe your street photography style?

My style of street photography has gone through several changes over the years. On my first few days out in the streets I was terrified about shooting in public and resorted to shooting from the hip while passing people in the street. Needless to say many of those shots were for the bin.

As time went by I started using my DSLR (for better quality images) and photographing my subjects using the viewfinder. This was all very well and good until I started to realize that here in Germany, where I live and work, the majority of the population do not like to have their privacy invaded. It got to the point where I gave up street photography for 7 months after a few confrontations which seriously knocked my confidence. 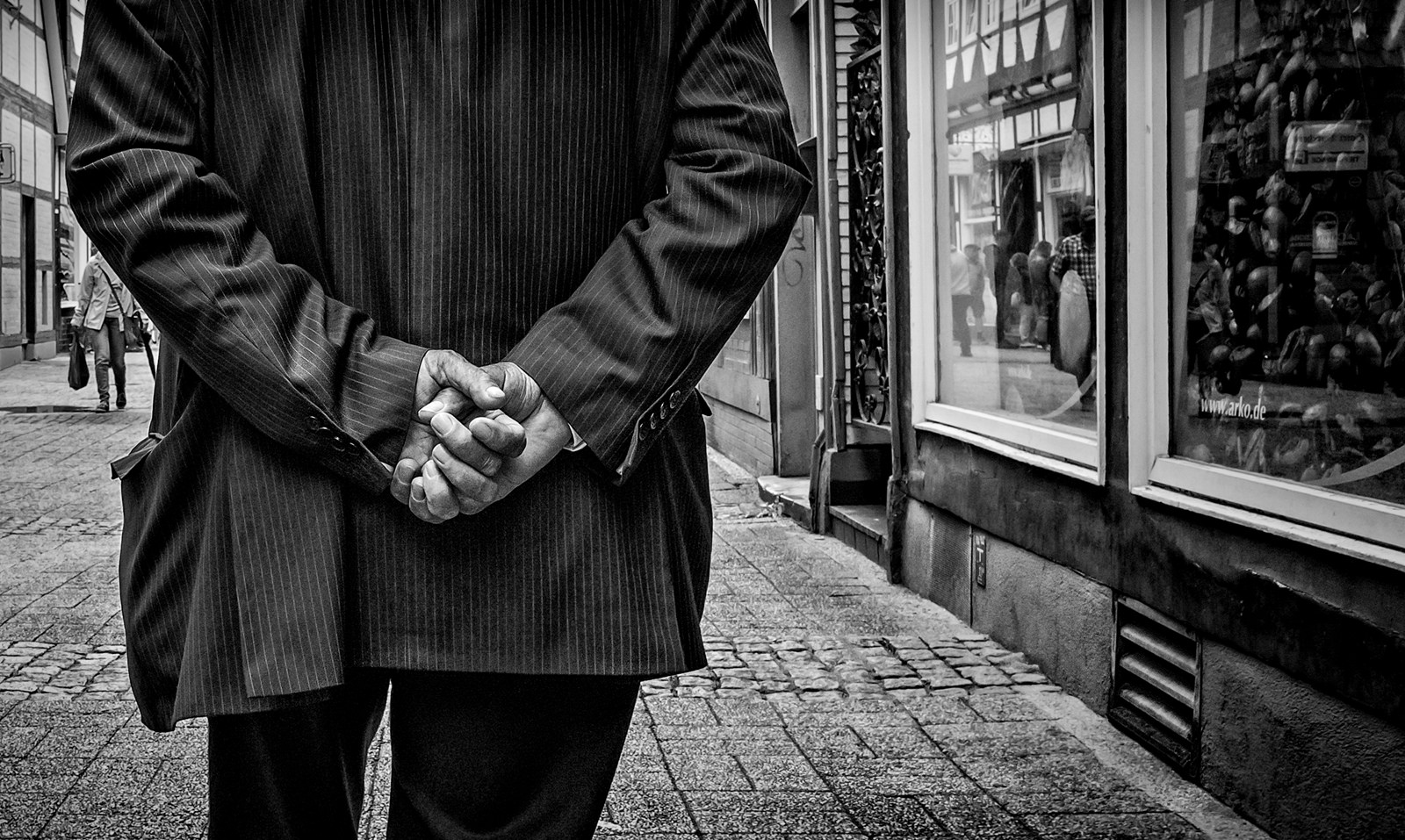 I did return, this time with the Sony A6000 which was smaller, more inconspicuous and offered me the picture quality of my DSLR but unfortunately this camera was too loud for the close up candid shooting I was hoping to achieve. Today I shoot primarily with my Ricoh Gr on a strap around my neck and I have developed a technique where I can get close to my subjects and photograph them without them realizing they are being photographed.

I have recently purchased the 18-105mm lend for the A6000 which I am now combining with my GR on street walks. I like the image quality and the compression effect I get with that lens. 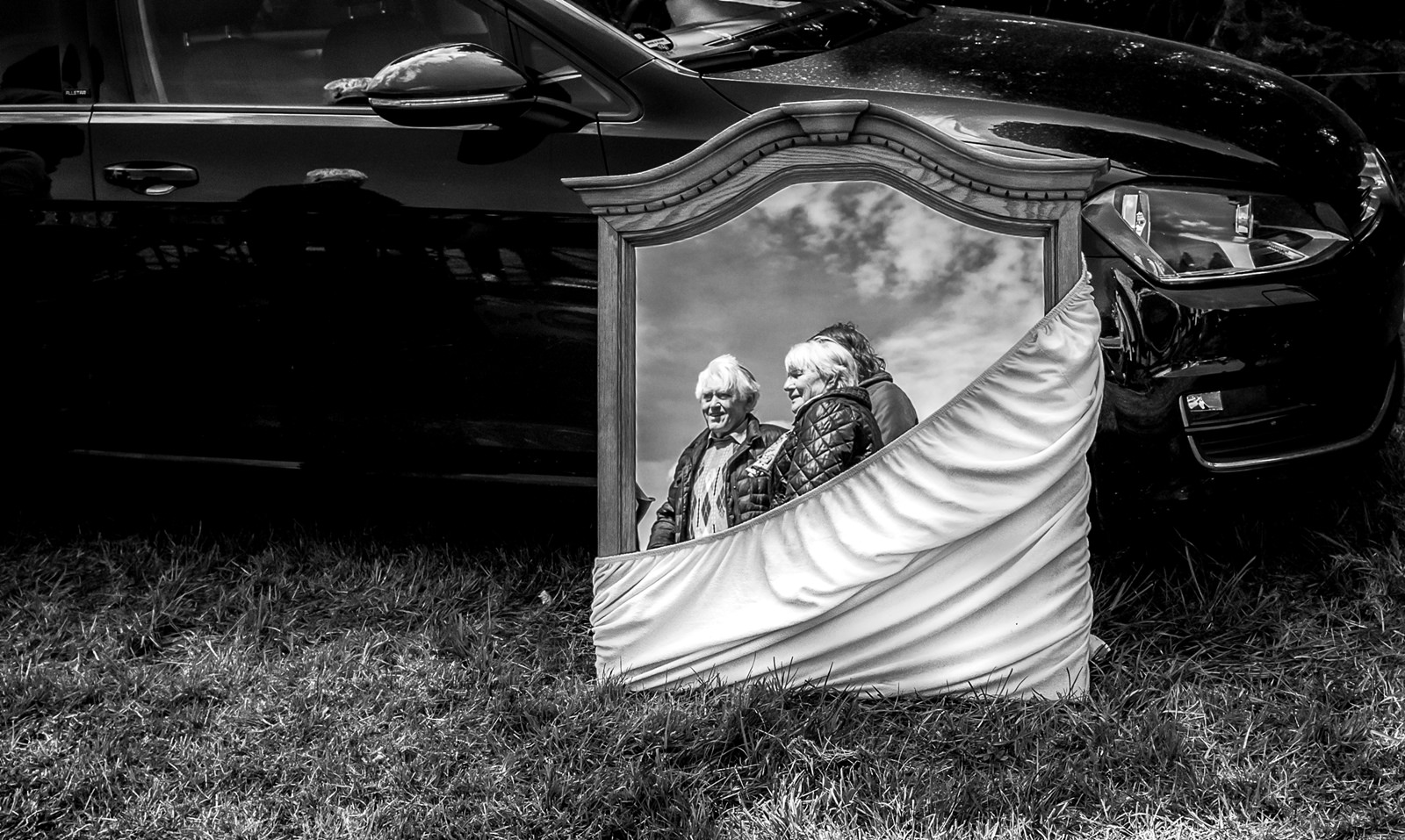 Where is your favorite place to shoot and what time of day do you prefer?

I live in a small village in Germany which means I have to travel if I want to find any signs of life to photograph. I often visit Celle and Nienburg which are quite busy and I can get there by car. My favourite place in Germany has to be Hannover, the largest city closest to me but it is better to go there by train than car due to traffic and parking spaces.

I also love Glasgow. On my last two visits to Scotland visiting family, I have met up with another Flickr street photographer Leanne Boulton, who I was introduce to by Wayne. It’s nice to go shooting with someone else, plus the fact that in the UK the public are generally more at ease with having a stranger photograph them in the street which makes it even more fun. 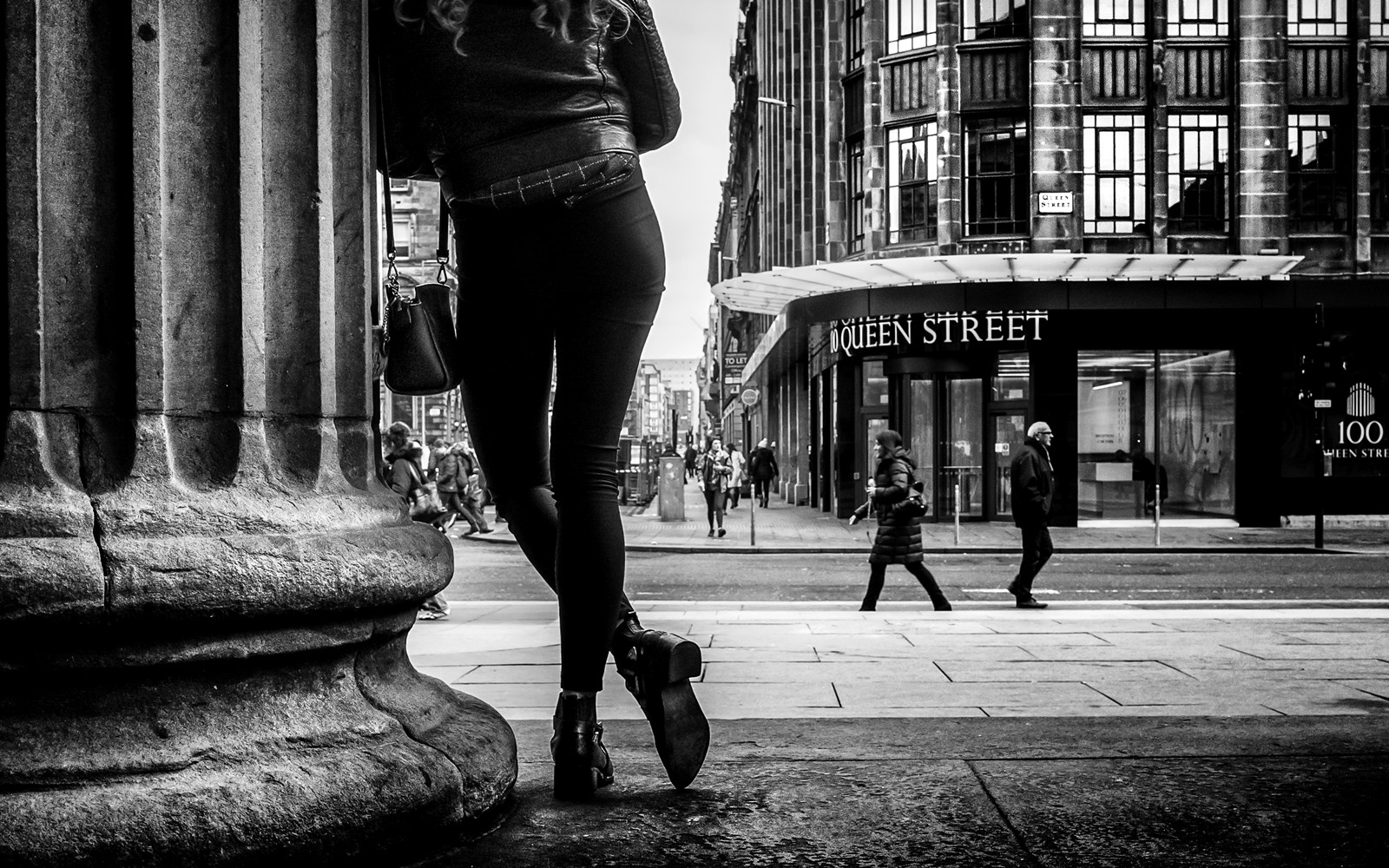 As for what time of the day I prefer to shoot, it has to be daytime….that’s when there are more people around. Night time street photography does interest me and I do applaud those photographers who get out there and capture street life at night but due to work and family commitments I don’t really get the chance to venture out after dark.

I love this image: 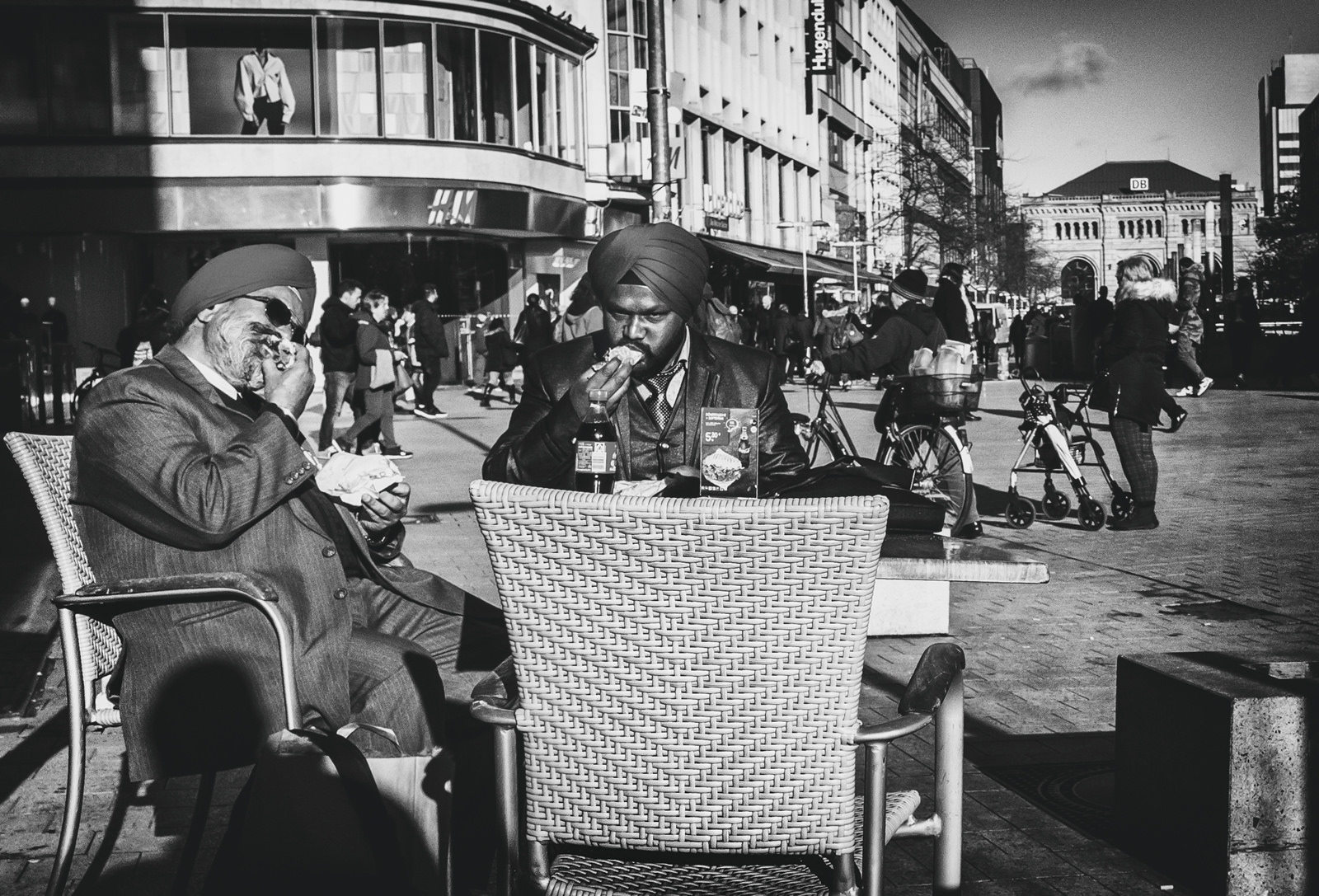 Can you tell us about it?

On our Flickr Group/Website we run a Monthly Challenge where our members have 5 subjects/themes to try and capture within the month. In November, one of those subjects was ‘Two of a Kind’.

I spotted the two gentlemen earlier on in the day in Hannover and I tried to capture them with their matching bright red turbans using my A6000 and 18-105mm….however, due to the lack of practice with my latest set up the shot didn’t work out and I just carried on.

Later on in the day I saw them both sitting outside having a spot of lunch and I knew then that I had a chance to get an image for the above mentioned subject. This time I was going to use my trusty Ricoh GR hanging on my neck strap, set on Snap Focus (as it always is) and get in as close as I could.

I walked towards where they were sitting, as you can see by my shadow, I positioned myself in between the tables and pretended to read the menu board, which is off to the left in the image. After a few moments I turned my body to the right to have my camera pointing in their direction and while taking another quick glance back at the menu board, I hit the shutter button and moved on.

When I got home and viewed the image on my PC I was pleasantly surprised that not only had I captured the two men with their matching head dress, but I also caught them both having a bite at the same time too.

In the end I submitted different image for that challenge subject which I managed to get using the A6000 and my new lens.

Do you join a lot of contests/competition? If so, what are the benefits to doing so?

Funny you should ask that question because that is basically what our Flickr group is all about. Although I must say that it’s not so much in the way of contests/competitions that we run but more in the way of offering inspiration and setting challenges for our group members. There are no prizes as such, but the top photographer of each month gets their image published on our home page and also get to select the next months subjects. 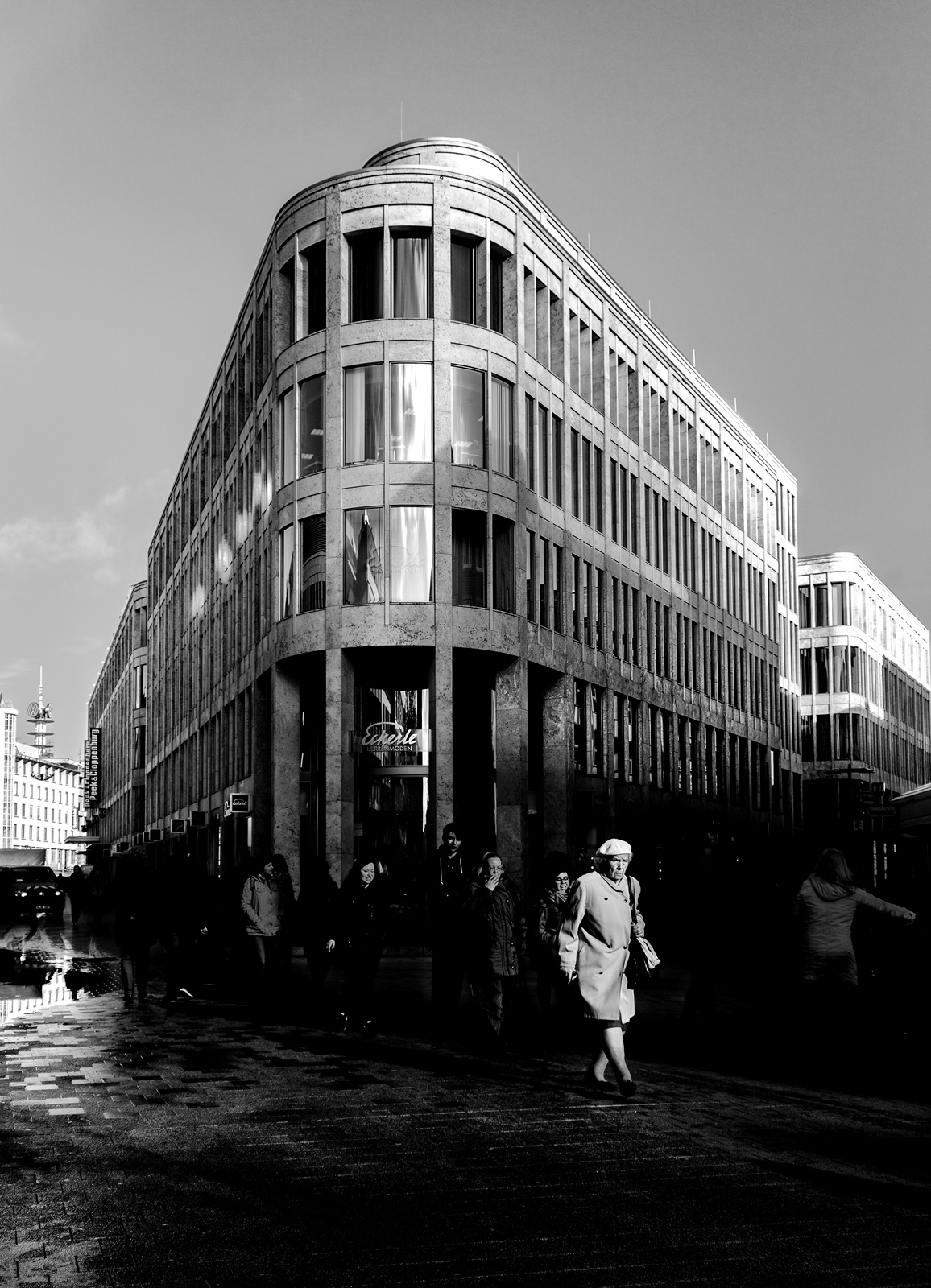 Nonetheless, it gives us something to go out into the streets and look for. The benefits of running and taking part in these challenges are that it’s a great way to see how other photographers interpret any given subjects in our monthly challenges that can maybe in turn give others more ideas and techniques that they can add to their photography.

Then there is our annual PHOTINGO Street Photography Challenge that is open to anyone on Flickr. Each participant gets a virtual bingo card with 30 subjects that they have to try and capture over the three month period that the challenge runs.

I personally haven’t taken part in any contests/competitions as such but I do intend to take part in the Hannover Photo Marathon next year which I found out about from another Flickr member. I’m really looking forward to that and there are some great prizes up for grabs too. 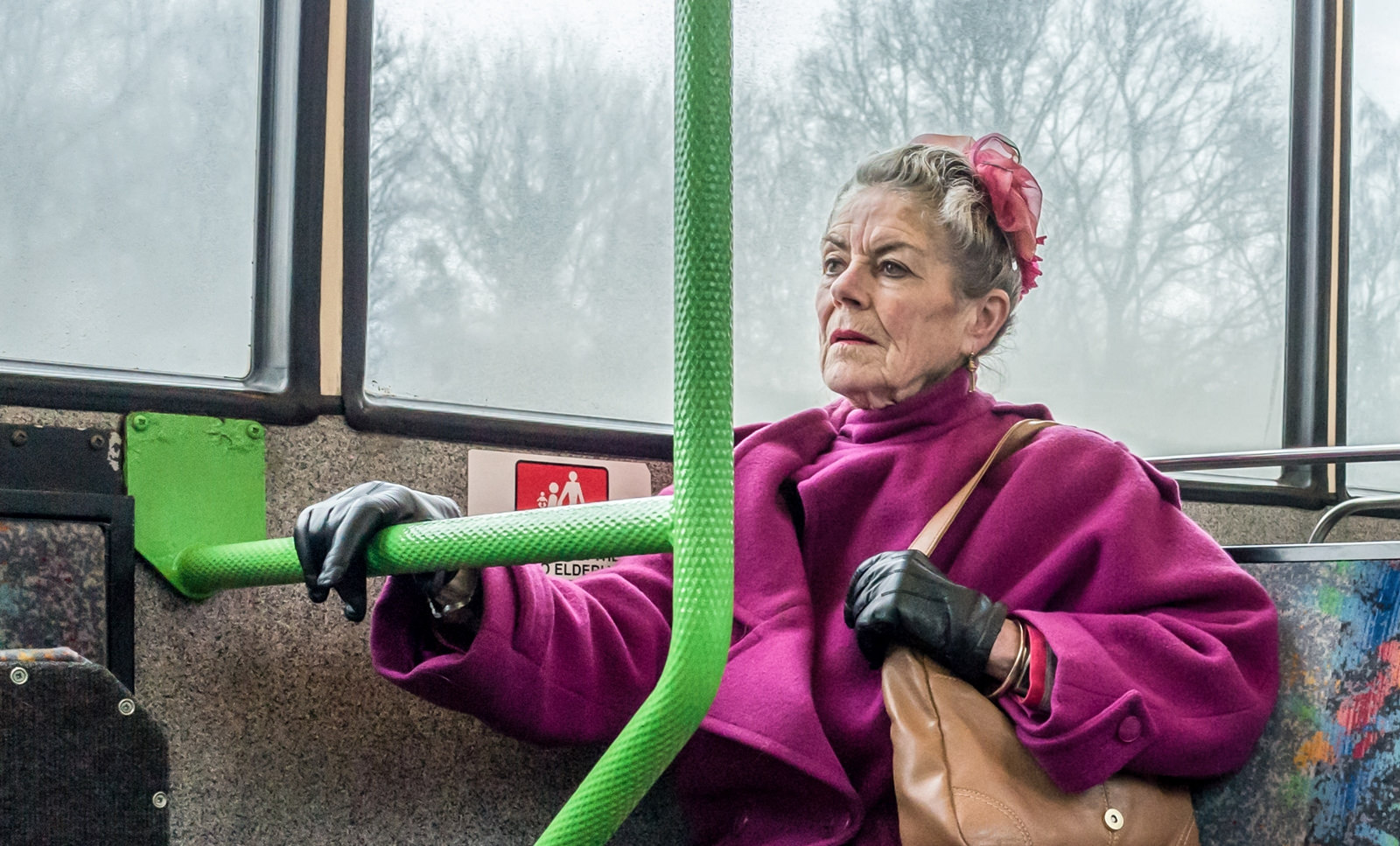 Since I took up this genre of photography it has certainly taught me to be more appreciative of what I have in my life.

Years ago, I would have probably walked through town looking in shop windows thinking what I could buy or maybe what I would like to eat, then go back home put my feet up watch the TV without really taking in what was going on around me.

Nowadays, I am noticing more and more people who are less fortunate than myself, those who have some how ended up homeless and living on the streets. Without getting too much into the politics of it all, I still find it hard to believe that in this day and age we still have people begging for money and looking for food in litter bins, especially in prosperous European countries.

On a lighter note, street photography has taught me to ‘see’ and not just look with my eyes. I love juxtaposition images and most of my friends on Flickr know that. I’m constantly looking to see how I can match up people with signs, objects, graffiti…anything. I like to be creative when I can and capturing a good juxtaposition really makes my day. 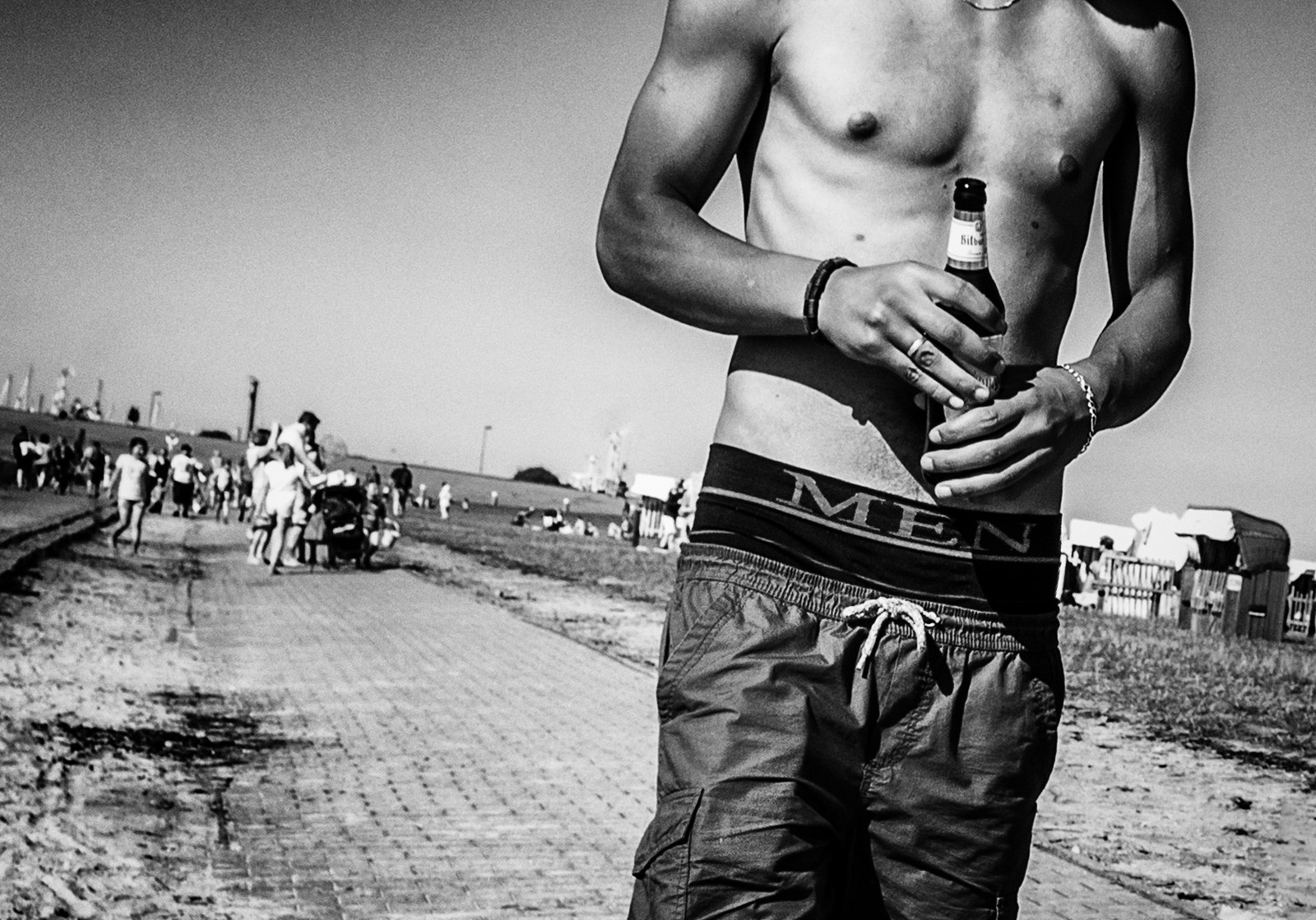