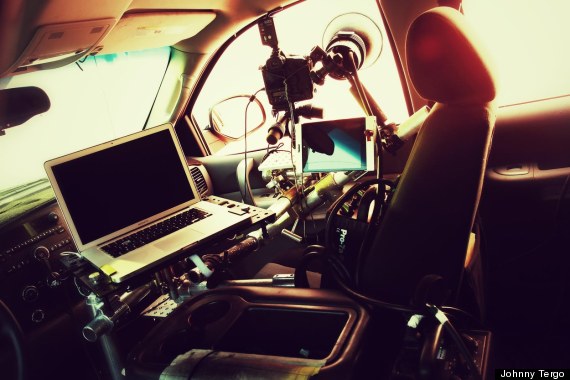 Los Angeles photographer, Johnny Tergo, tricked out his pickup truck with a boom mounted strobe in the bed, another strobe on the passenger side, DSLR tethered to a laptop and PocketWizards to capture life on the streets as he sees it happen. It makes sense that this would happen in LA where people practically live in their cars (with their traffic they have little choice).

Tergo created the mobile street studio as part of a personal project called Passenger Side Window. You can see the work on his website.

Tergo says that he spends up to two and a half hours per day in traffic, which gave him the idea. He cruises neighborhoods with lots of pedestrian traffic and pulls over to photograph interesting subjects. Photos are streamed to his iPhone, which he uses to show images to his subjects.

As you would expect, some subjects aren’t too happy with the surprise photos. But Johnny doesn’t hesitate to stop to show them their photo and offer to send copies.

Here’s a video of Tergo from NBC’s Carson Daily Show. Check it out:

As you would expect, the rig uses lots of power, more than his truck can provide. To provide adequate power, Johnny mounted two 4,000 watt gas generators in the bed of the truck.

Take a look at his gallery, he’s created some very interesting images with this approach. In the meantime, I’ll try to get him to do an interview for the magazine.