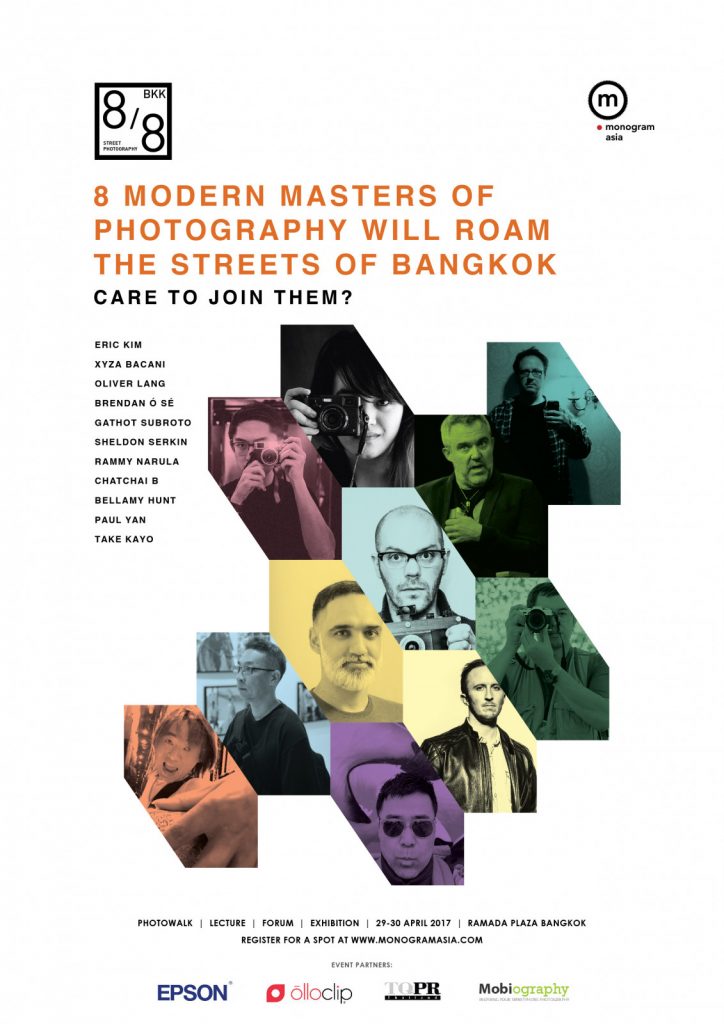 “In an effort to promote and develop a photographer’s vision and style in photogenic storytelling, Monogram Asia announced today that they will be organizing an event that will provide the opportunity to street photography enthusiasts to improve their skills via a 2-day workshop and a Photo Walk through the streets of Bangkok led by 8 of today’s modern masters of the genre. The event is an inaugural instalment of a series of annual workshops that will run in Asia’s most vibrant cities, starting with Bangkok.”

This two-day innovative workshop begins on April 29th, 2017 is organized around three major components. Here’s what you can expect:

First, an exclusive photo walk will give 64 street photography enthusiasts and practitioners the chance to shoot the streets of Bangkok with 8 of today’s iconic international street photographers including Eric Kim, Xyza Cruz Bacani, Brendan O Se, Rammy Narula, Gathot Subrot, Sheldon Serkin, Oliver Lang and Chatchai Boonyaprapatsara. These photographers will spend three hours conducting an intimate photo walk along with some of the local talent from the Street Photo Thailand Collective. It’s going to be epic.

Second, during the two day workshop there will be plenty of lectures, talks and idea sharing featuring Eric Kim, Brendan O Se, Rammy Narula, Sheldon Serkin, Oliver Lang, Bellamy Hunt, Take Kayo and Paul Yan. The lectures are open to a larger audience of 200 people and there’s even special pricing for students. Some of the topics to be discussed include street photography in general and what the future holds for this genre.