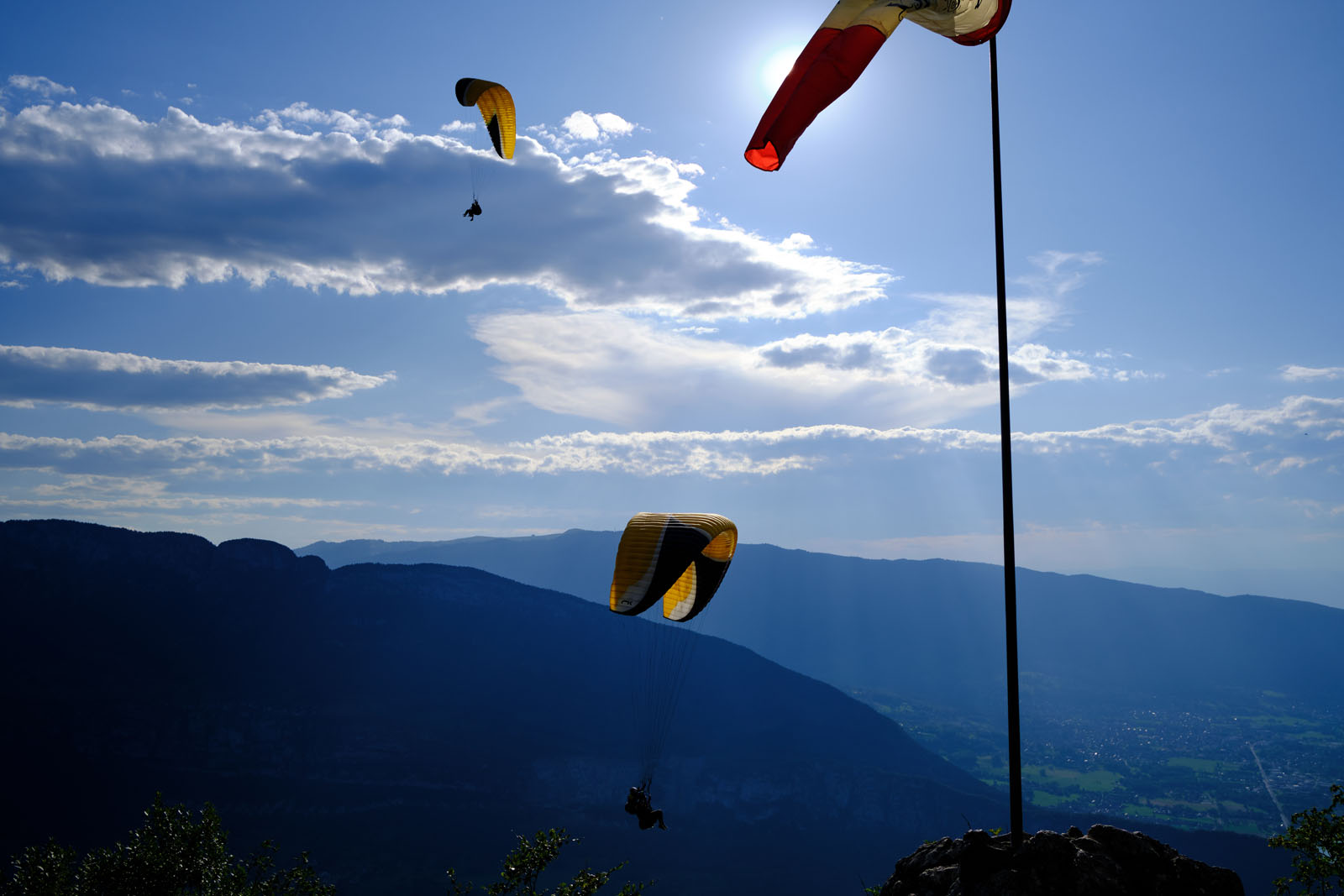 We boarded the train at Paris Gare de Lyon. From the very beginning of this stretch of our journey – life seemed like a dream. The train pulled us past the most beautiful fields and villages, sheep and cows grazing here and there all along the way. Every so often the train would stop, people would stir, an incomprehensible announcement would go over the intercom (Je ne parle pas français) and we’d set off once more. About halfway through the scenery began to shift and grow, landscapes rising like ocean waves when a storm approaches. The hills rose and morphed until we were surrounded by imposing mountains. It was then that we found ourselves in Annecy, France, a small town nestled around a crystal clear lake and watched over by the French Alps. 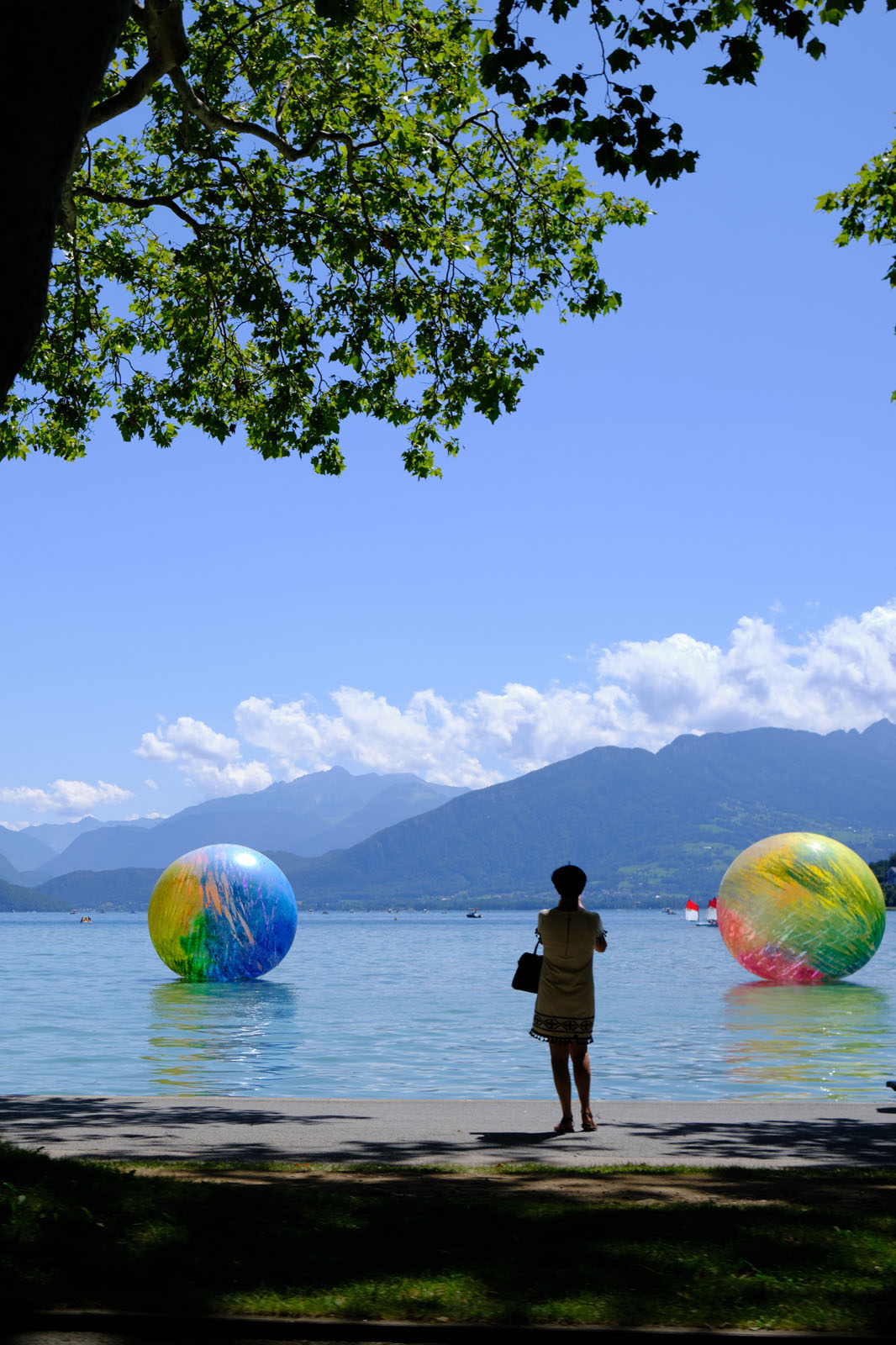 It was certainly a less urban destination than bustling Paris, where we had spent the last 10 days. But it was a stunning backdrop for street photography and my husband and I were eager to hit the streets, cameras in hand. Our generous hosts were good friends of my husband’s and in no time good friends of mine as well. Each day they filled our stomachs with the finest French cheeses and wines and took us to see the more noteworthy areas of their picturesque city. My favorite moments included a walk through the city’s “Little Venice”, a drive around the circumference of Annecy’s lake followed by the picnic of my dreams nestled under the branches of a shade tree, a short hike in the nearby forest whose beauty left me breathless, and evenings spent gathered around a table with new local friends sharing a bottle of wine (or two), talking, laughing and straining to decipher as much French as I possible could. But there is another afternoon that will always come to mind when I think of Annecy. 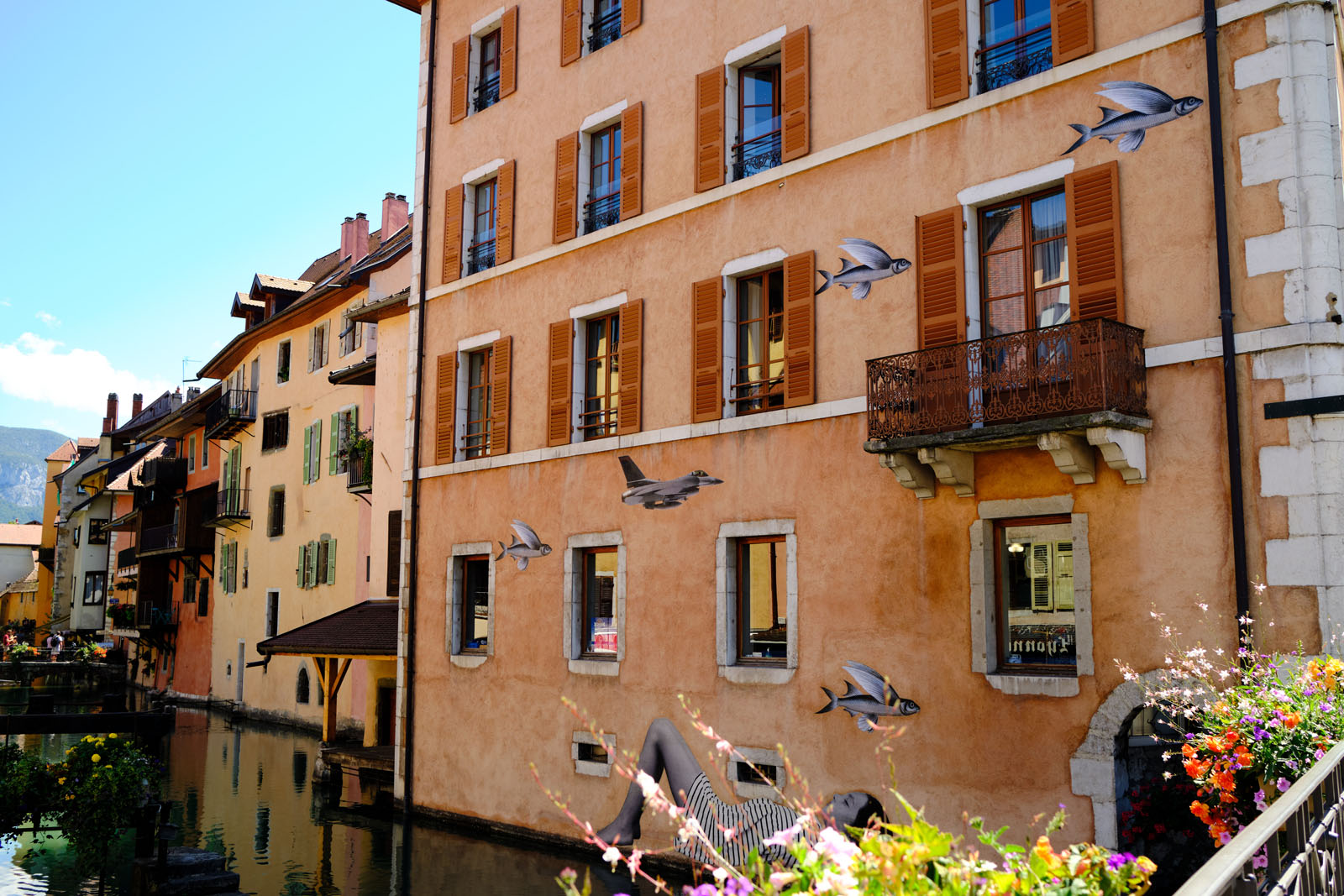 It started out when our hosts told us they wanted to take us to L’Edelweiss, a well-known restaurant in the area to have fondue. We drove up into the mountains and parked outside of the place, which was situated at 1,200 meters above sea level and perched right on the mountainside with the most spectacular view of Lake Annecy. Before we ate however, the couple wanted to show us something, so we began to hike even farther up the mountain. Here you could appreciate the French Alps in all their glory – immense, majestic, imposing and dotted by herds of cattle wearing cowbells, which made for the most wonderful background “music”. The hike was short but strenuous as we moved up a steep incline to make it to the peak of the mountain. We soaked up the views and shot some beautiful landscape images, but as we reached the mountain top, we found something that would become one of my favorite photo series from our entire trip.

Early into our hike, there was an unmanned booth advertising “Tandem Flights”. The English description said this:

“Very easy, without an apprenticeship, everybody can discover paragliding by doing a maiden flight in complete serenity, with a qualified paragliding instructor.

“In twos, you in the front and the instructor behind. A few meters to run down the hill and you take off. To land, it is even easier.

“Professionals ensuring your dreams. All instructors speak English. The major risk is you will be addicted!!! Enjoy the flight with the Best Team.”

You could see them dotting the sky here and there, the paragliders. Bright yellow parachutes against a bright blue sky. But they still seemed quite far away. In fact, before we found our way to the paragliders, we passed a small group preparing for a different kind of flight, their colorful hang gliders tucked away in a small patch of trees. 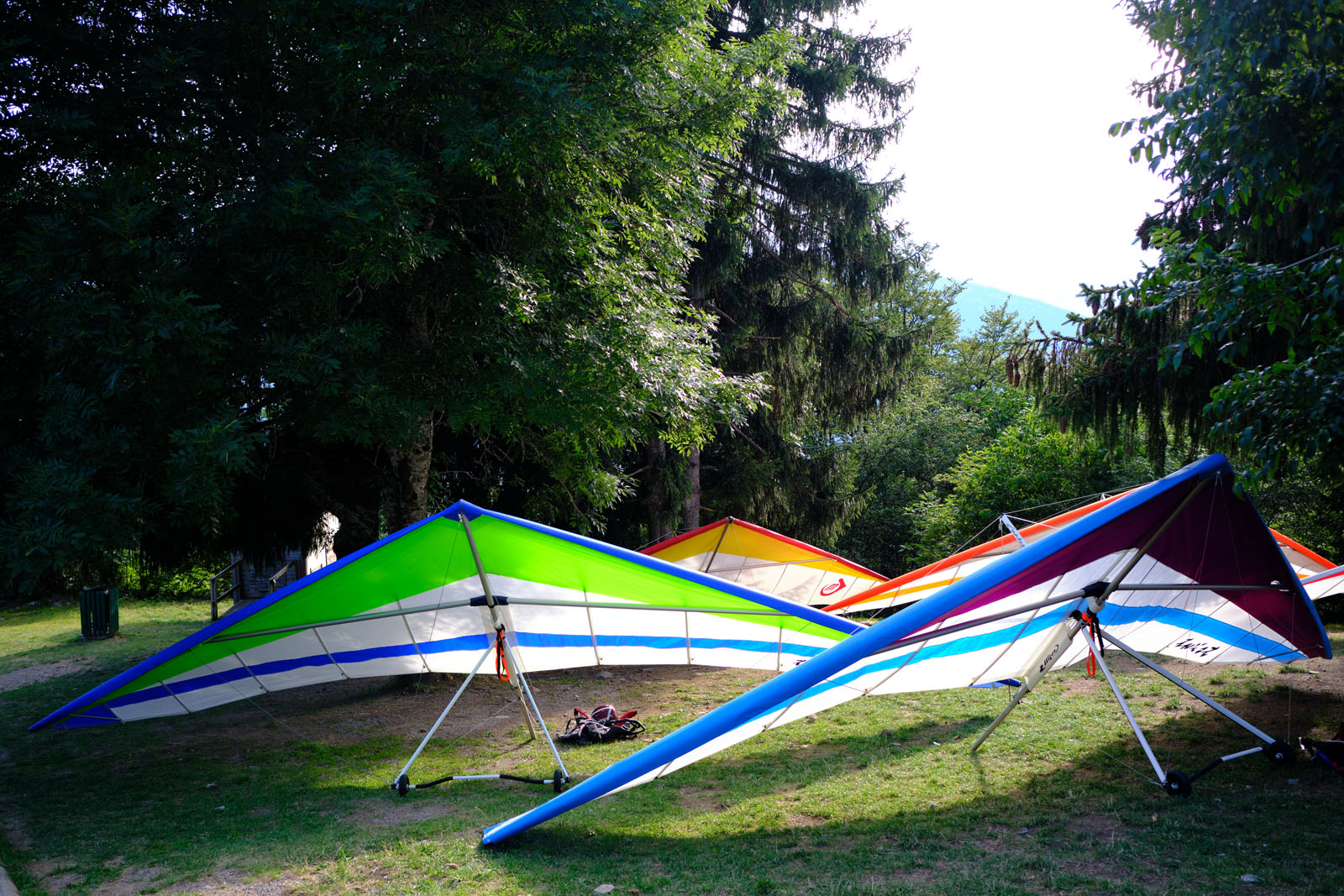 But they didn’t appear ready for take off and in the not too far distance, we could see bright yellow chutes billowing in the wind. We picked up the pace and headed for the peak. From behind we caught a glimpse of a group taking off. Not the best vantage point, but impressive nonetheless. 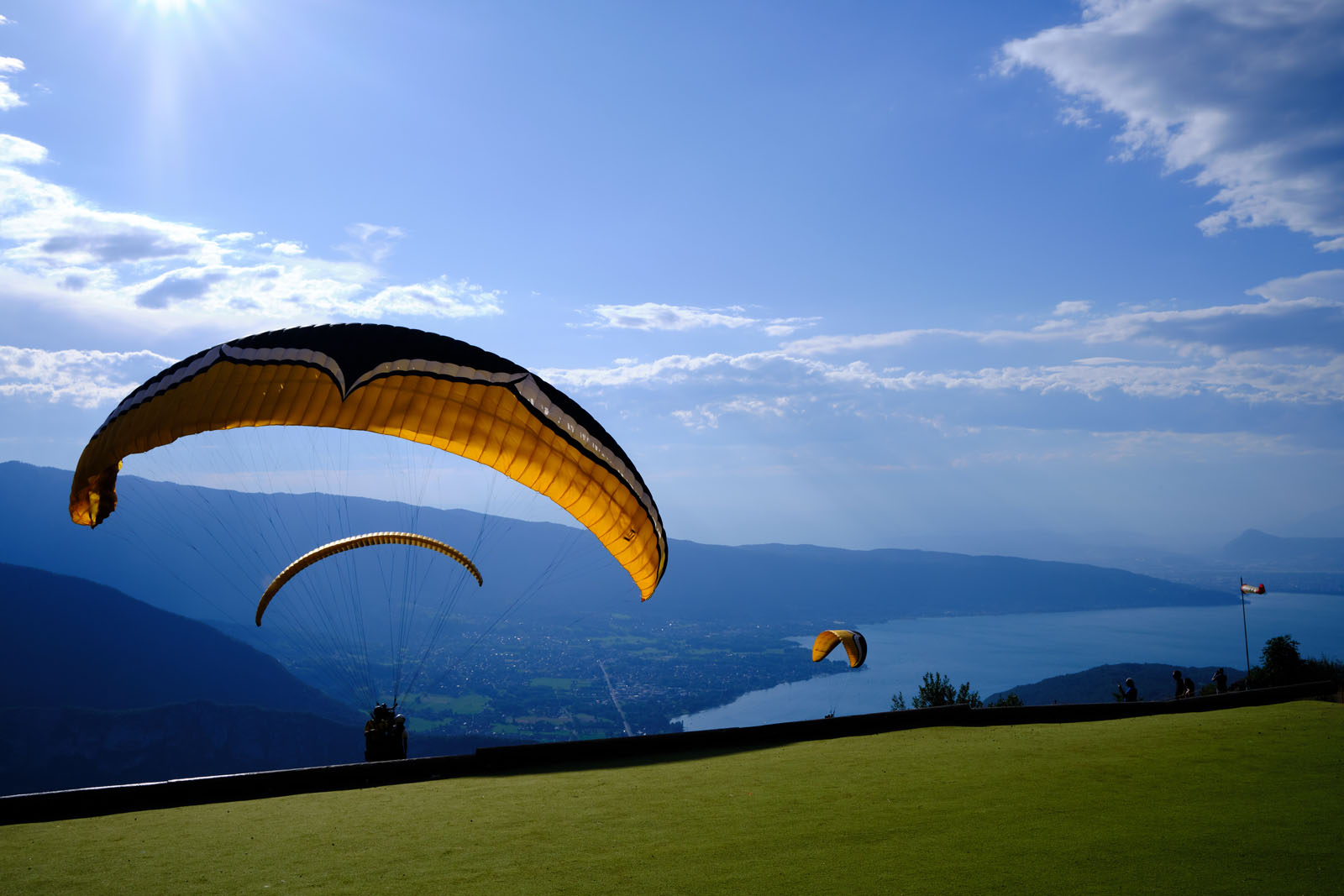 By the time we rounded the corner and made it to the official viewing site, it seemed they were all up in the air. The way they circled about in the wind currents, they reminded me of a group of vultures, albeit less macabre. 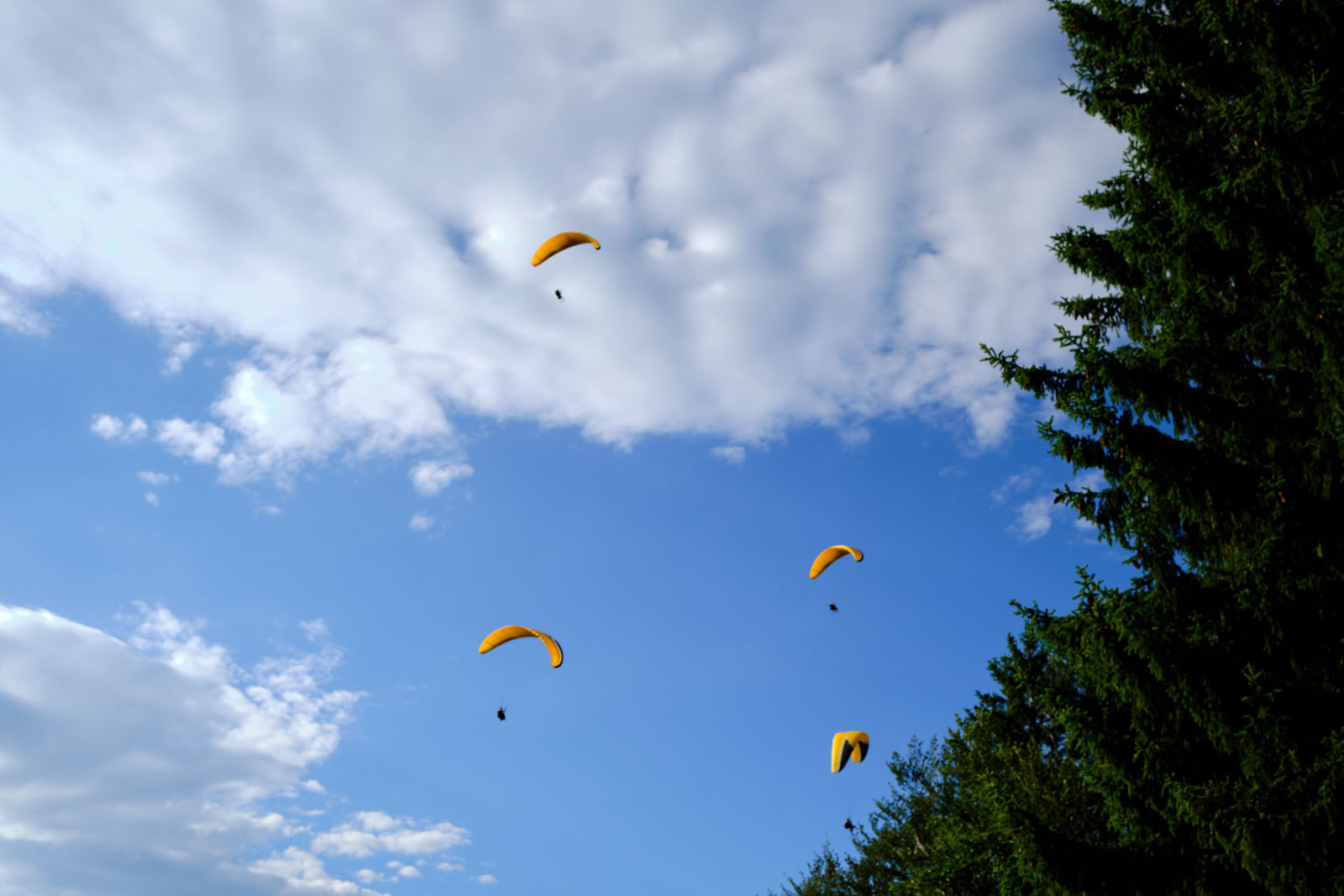 But wait, something drew my eyes earthward once more. There was one last paraglider, ready to take off. Somehow, I didn’t see how exactly, the parachute that had been lying in the almost neon green grass caught in the wind and billowed. The instructor and his charge started running. A few long strides and they had literally walked right off the mountain and were now in flight. It was amazing. 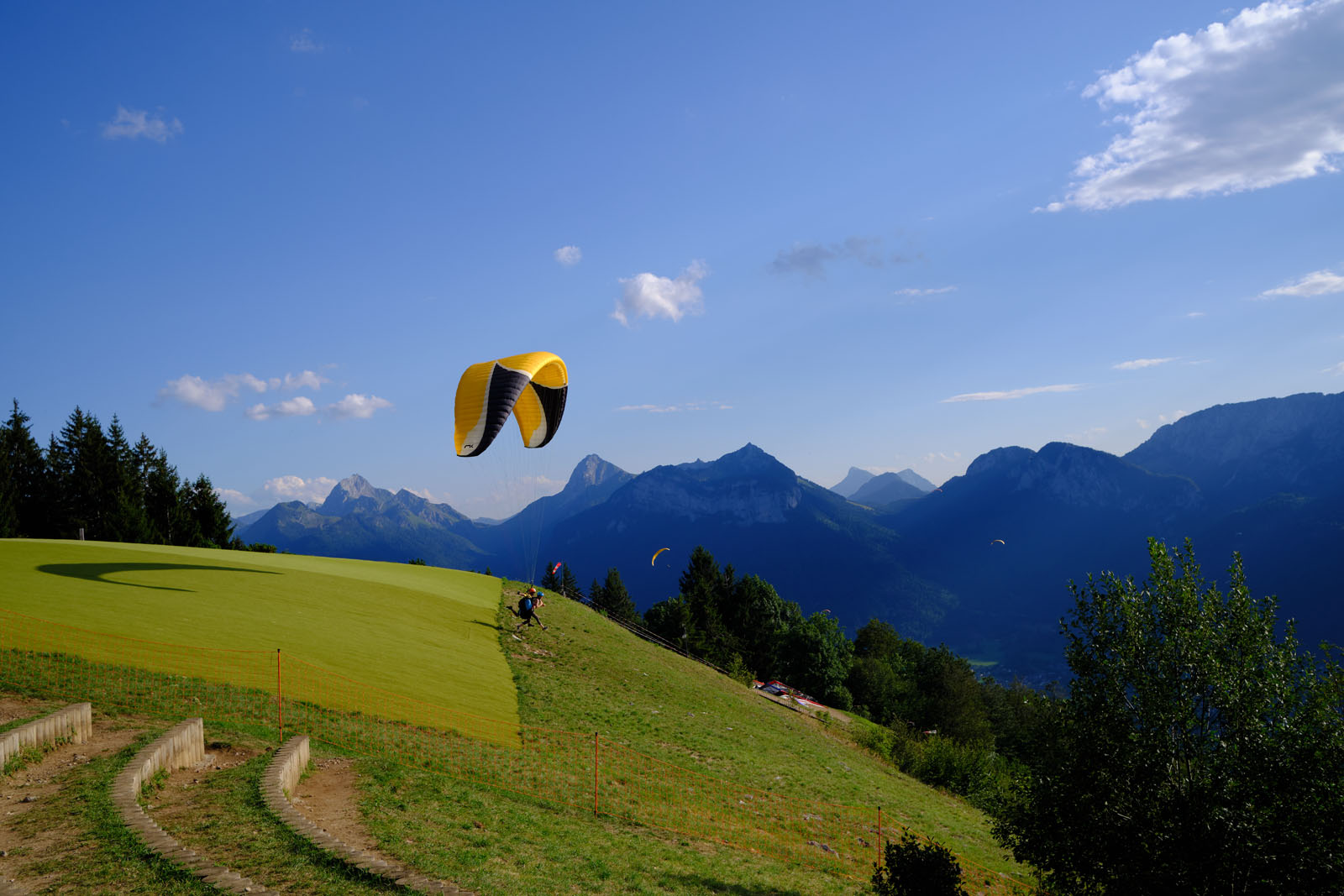 The wind carried them swiftly by us before it seemed they slowed and joined the other “vultures” in their slow circles in the sky. I watched, rapt, and took the occasional photo of these humans in flight. 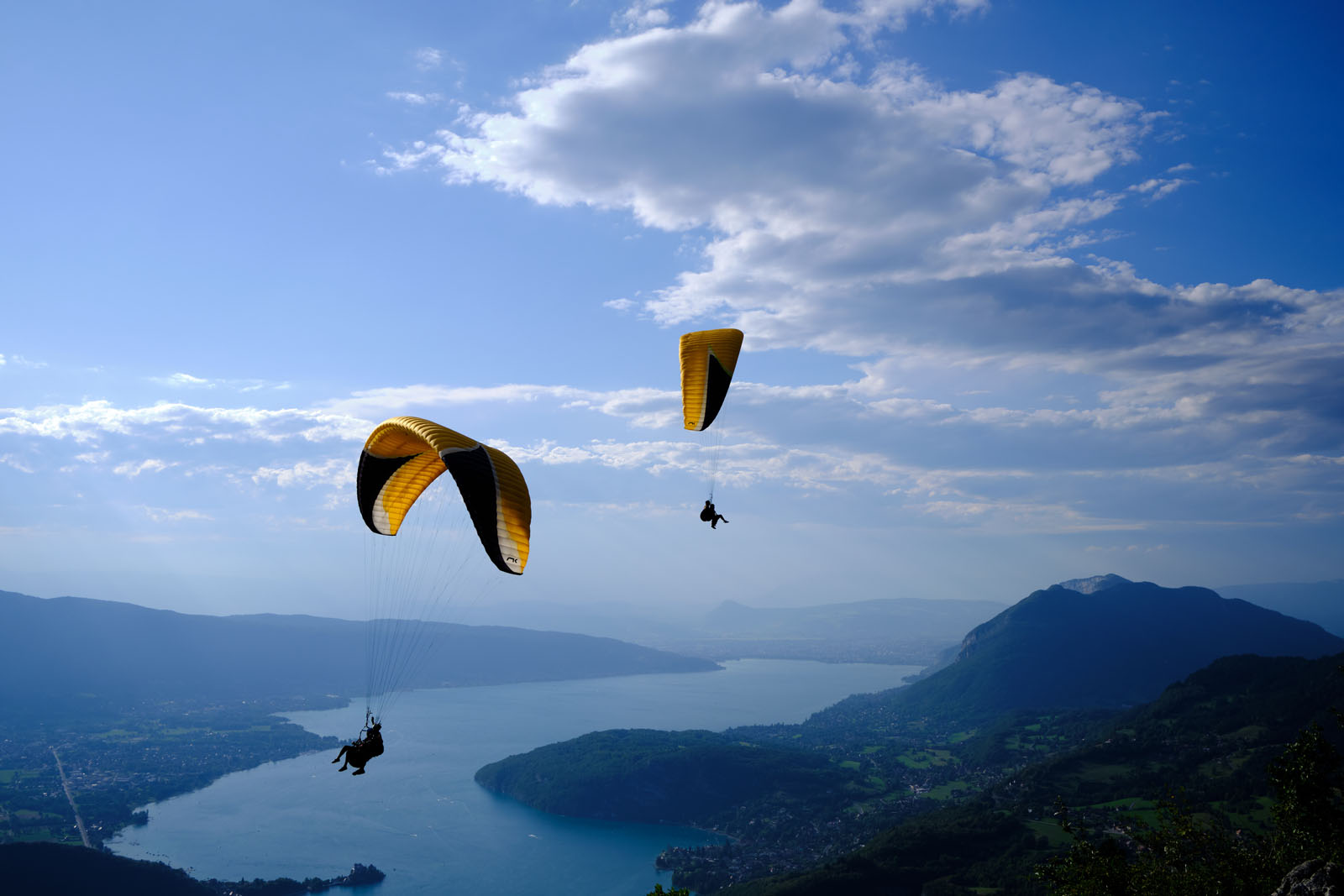 It was late afternoon and it seemed like the paragliders were through taking off for now, so we headed back down to see what the hang gliders were up to. A small crowd had gathered and taken seats on the mountains edge ready for the action. The hang gliders were receiving a bit more instructions from their grounded counterparts. 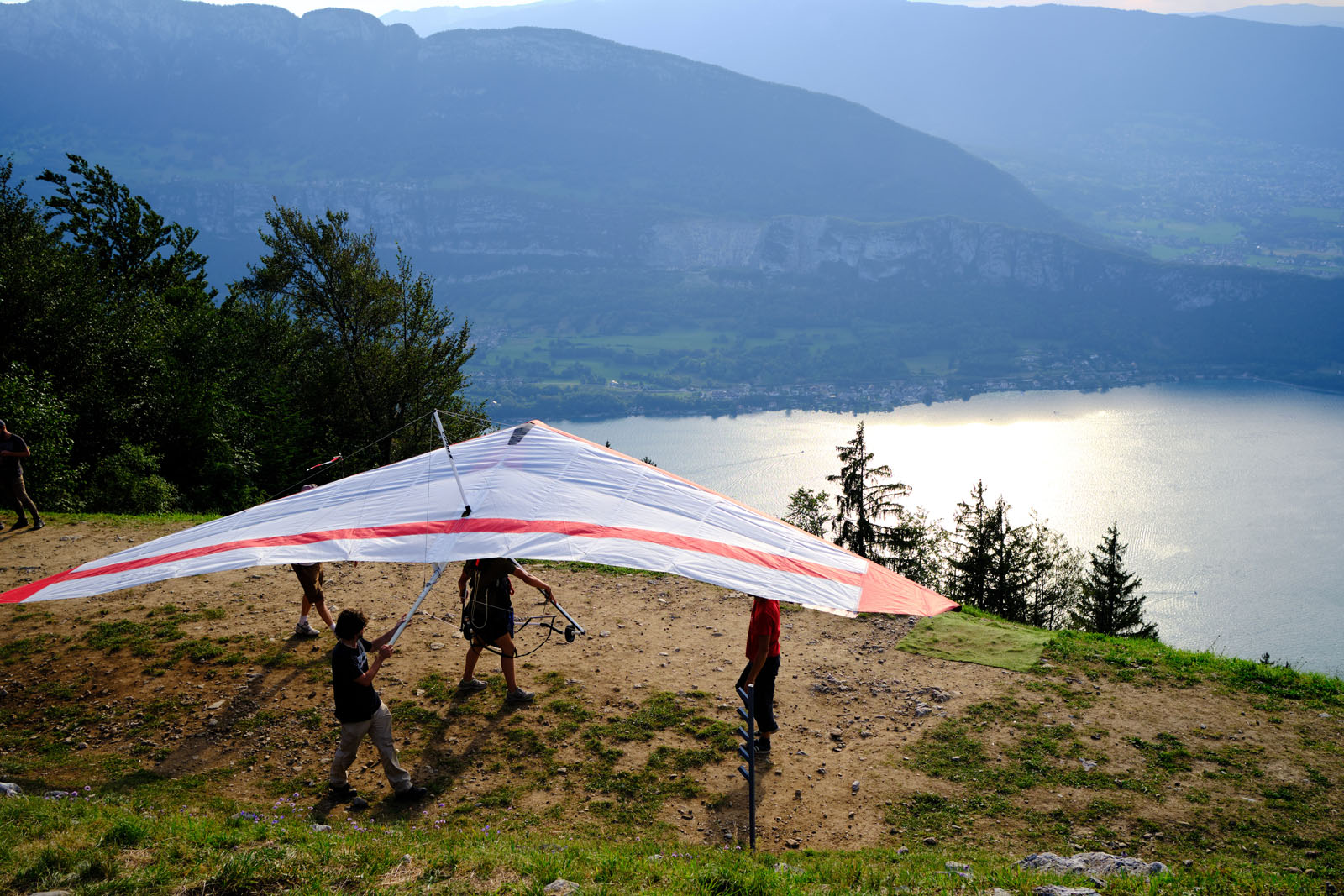 I was surprised at how small the dirt “runway” area was. Everyone sat quietly waiting for the hang glider to take flight, it was hard to tell when he would actually take off. And then suddenly, after much preparation and without much warning, he too took a few quick steps, right off the mountain’s edge and was in the air, soaring along the invisible currents. All gazes followed the glider as it got smaller and smaller in the distance. It was all so incredible, we sat around to watch one more take off. Each take off filled me, and the others in the crowd I sensed, with awe. 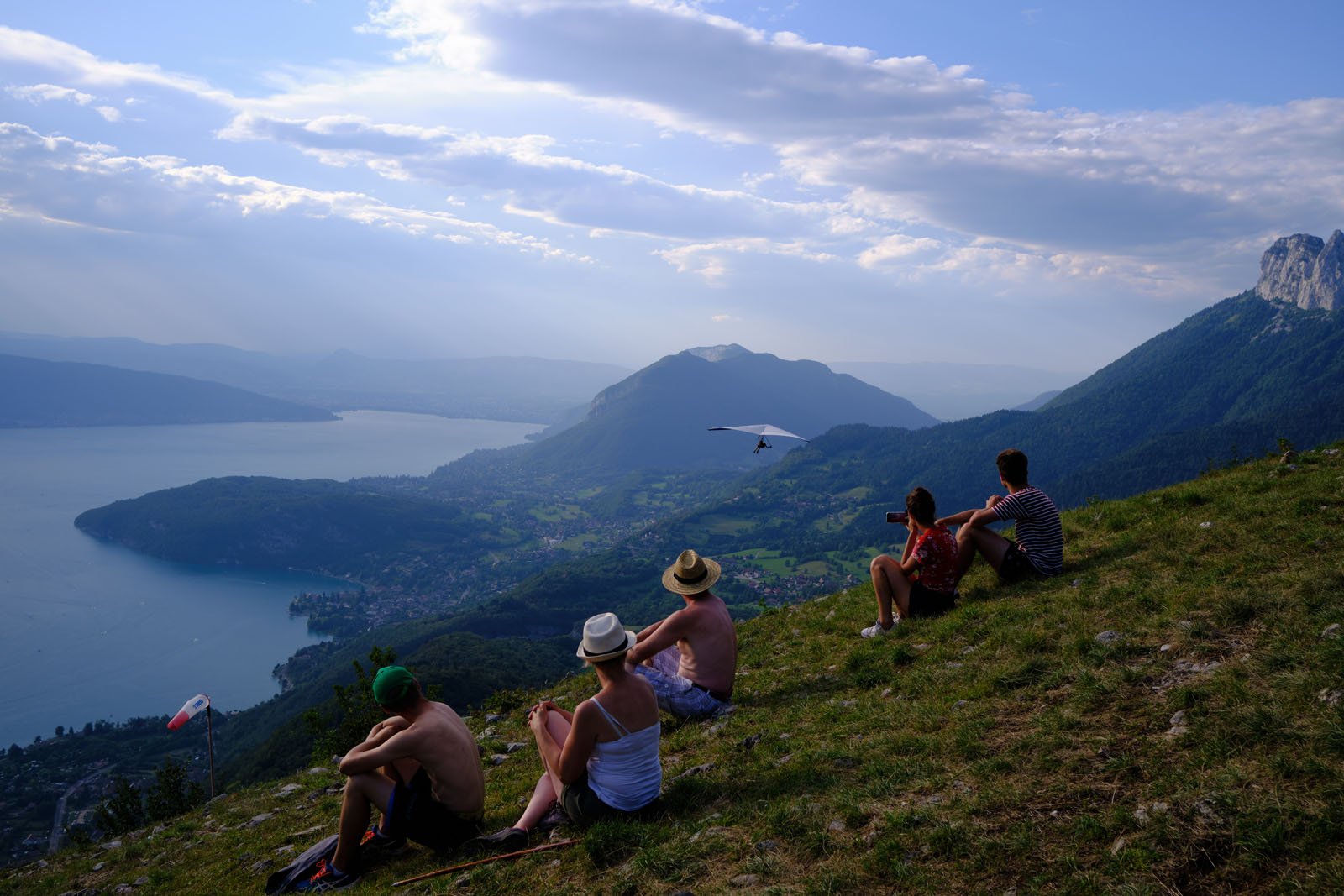 The sun was sinking low and our reservation time at the restaurant was fast approaching so I tore myself away and followed the others back down the mountain to enjoy more wine and cheese at L’Edelweiss. The views were still spectacular from here and the fondue was amazing too. And to my delight the show wasn’t over yet. As I dipped a piece of French bread into the steaming fondue, the paragliders came back into view. One soared right overhead, causing the restaurant patrons to cry out in excitement and cheer them on. Another one was fast approaching in the distance, so I quickly dropped my fondue fork and grabbed for my camera. I pointed and just as the crowd shouted out and the paraglider made a quick cut to the left out over the lake, I shot. 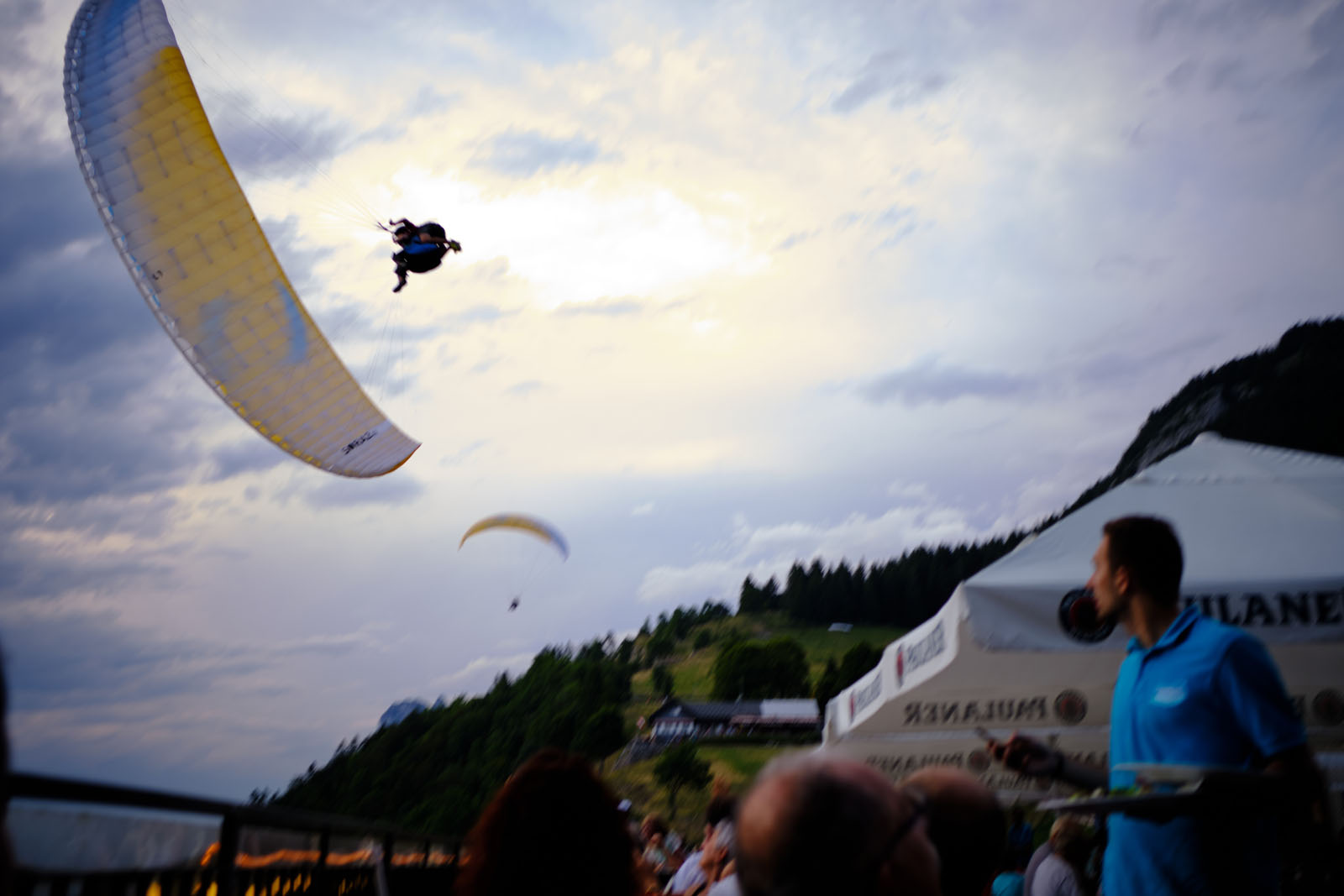 It was the perfect ending to a perfect day. Finally, filled to the brim with friendship, fondue and wine, we made our way back to the city. I fell into bed completely exhausted and dreamed of people flying.