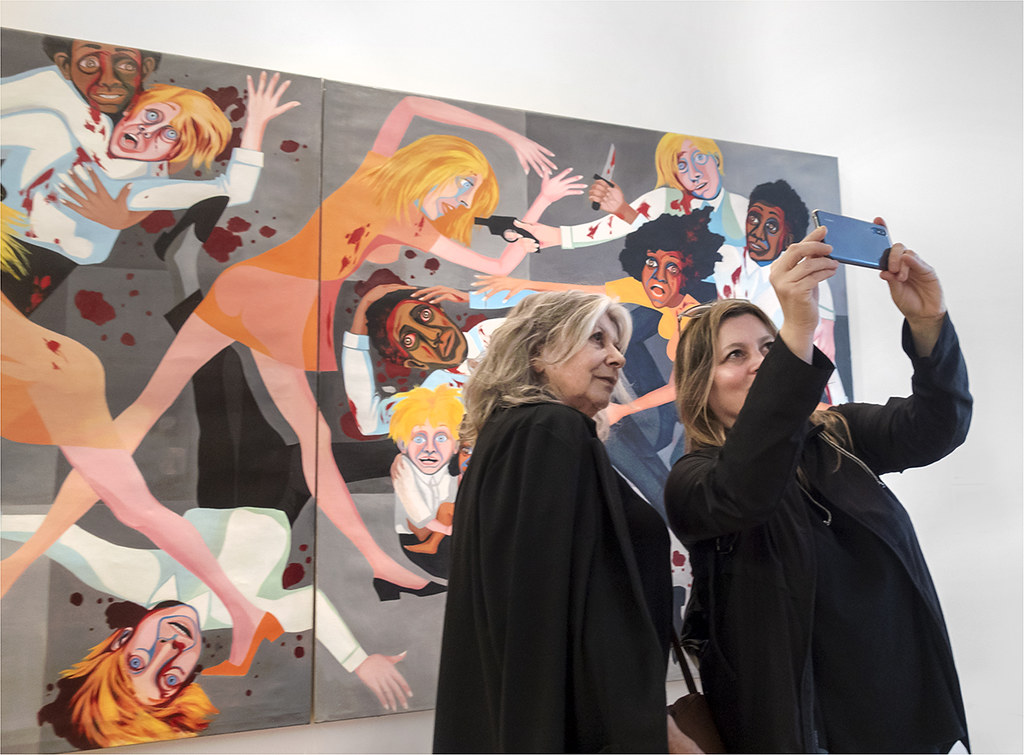 I have had an interest in photography for as long as I can remember but it is only since I retired that I have been able to give it the time and attention that I’d wish. Three factors spring to mind to explain why I have been drawn increasingly towards street photography. Firstly there is the easy access to many busy towns and cities all within easy reach of where I live in the n-e of England. Secondly, although I still possess and use a DSLR, my camera of choice is now a very compact, yet still very capable Sony RX100 which makes it so much easier to go almost unnoticed on the street. And thirdly, have also tried to better my understanding of the critical theory of photography by following a course of study.

Flickr provides the main platform for me to share my work though I do try to compile printed copies of some in the form of photobooks. One such on-going series of books, titled ‘Word . . . on the Street’ pulls together what I consider the best of what I produce. The following brief passage from the introduction to my latest book to be printed (in a print run of one 🙂 ) might help explain why I do it:

“What the following photographs ‘show’ of the times, the places and the people featured is plain to ‘see’. What they have to ‘say’, including about the person taking all the photographs, is for you to determine. How much ‘illumination’ can you extract from what is illustrated?”

Thanks for sharing that. It’s so true, when it comes to street photography, much depends on the viewer’s perspective.

Speaking of photobooks, I noticed you have self-published a lot of your work as photobooks over the years. What’s your purpose and your process when you create them?

It is true that I have been making my own photo books for some time now (the first in 2008), an exercise which initially was to produce holiday and annual family albums. But in doing so I realised a potential in this format as means of pulling together work centred on a theme or idea. It is such themes and ideas which informs some of my shooting intensions though it is not uncommon to find work produced some time earlier can be used even though this use was not on my mind at the time of taking. An example of this might be a book on ‘Empty Chairs’. Without planning it I did realise that I’d been taking a number of shots of empty chairs. I am still unsure about why I was doing this but then became more active in this pursuit. I now recognise that the empty chair is often used as a metaphor for loss or absence, so it could be argued that all the photographs I collected shared common ground in what they did NOT show. (in what was missing!) Collecting the photographs together into a book gives the ‘idea’ more status and is more likely to shift viewers away from what they are looking at to what they see.

Like many others I do produce lots of photographs. Many get no further than the delete button of the camera or computer. Those that are kept are stored (and backed up) in digital form. The numbers which are seen by anyone else is very small, and mostly confined to a brief appearance on a site such as Flickr. The most valuable ones, from my perspective, are the ones which find their way into a book. And they will do this by how well they contribute to the idea or theme being featured rather than how well they conform to the ‘quality conventions’ of photography. Not unlike the comparison in music terms, between ‘greatest hits’ albums (all popular stuff but which does not necessarily hang together very well) and vinyl albums constructed to be heard as a whole.

That’s a great point to keep in mind when curating your own images! Now let’s talk a little about your images. The thing that I immediately noticed when I looked at your Flickr photostream is how you really take advantage of urban settings and especially urban art to set up unique backdrops for your subjects. It seems like the backdrops (rather than the people) are the main storytelling elements in your photos. Would you agree? Is that your intention when you set up the shot?

It takes very little effort to find examples of the contrast between the life style being pushed on billboards, posters and in shop windows with that being lived by most people on the street. The irony highlighted in such juxtapositions provides fertile ground, and a visual narrative, for many street photographers, and I am no different in that respect. I could, for instance, apply the title ‘Loose Connections’ to the majority of the photographs I take whilst on the street. My interest in the people in such circumstances is for what they represent rather than for who they are. To emphasise this point I frequently (where it is possible) crop heads out or show the backs of heads. For example: 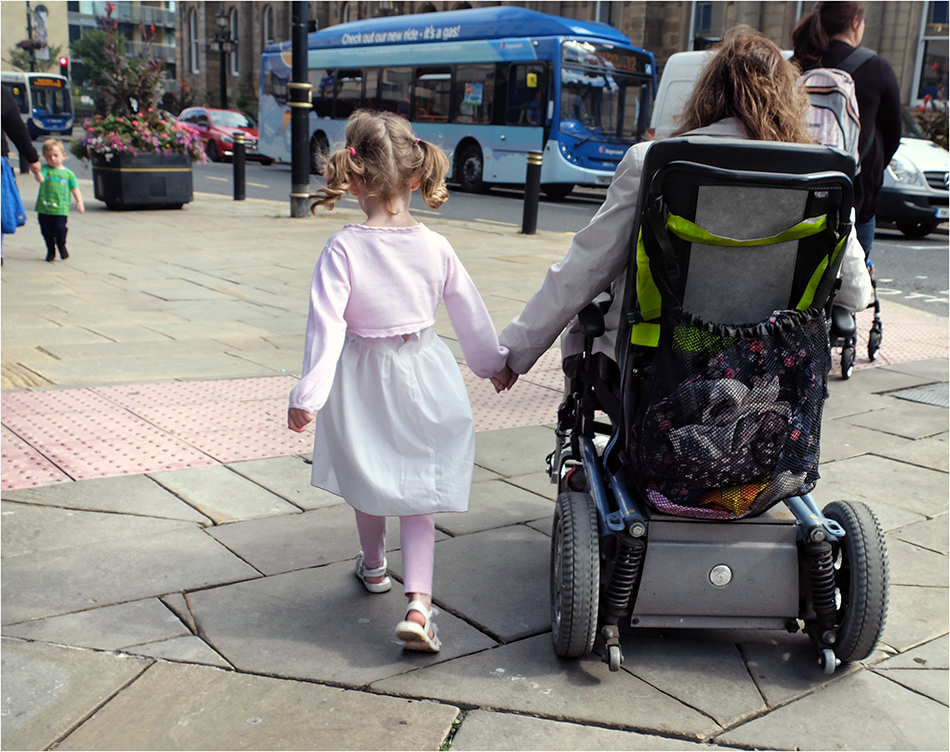 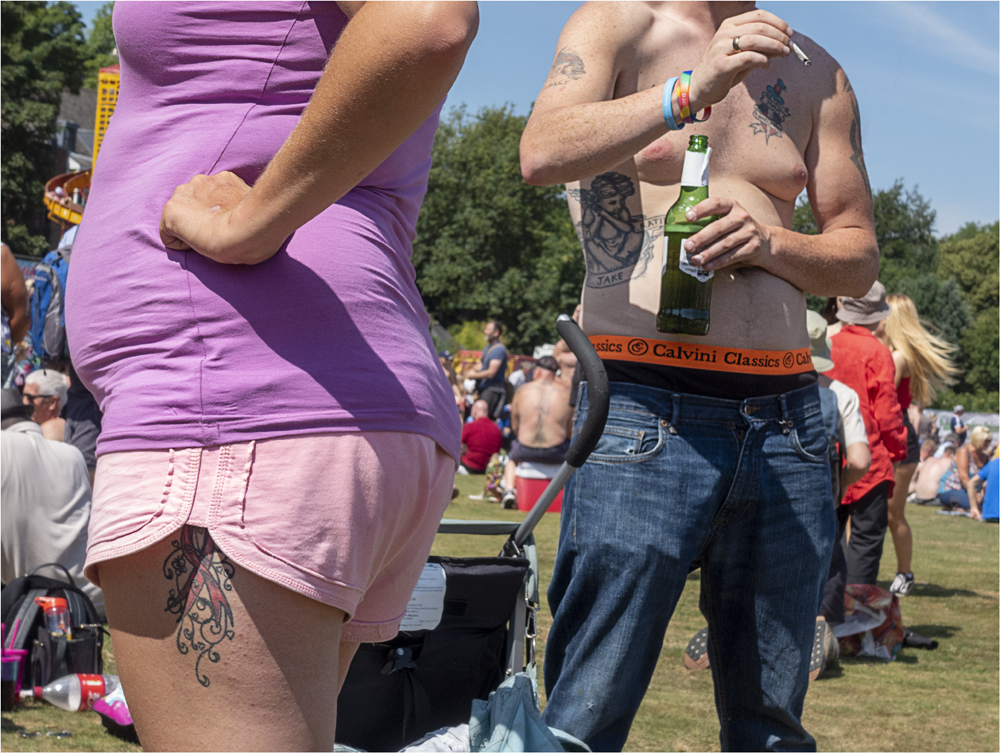 This is clearly not street portraiture.

How do you find these elements of street art/architecture? Is it by chance? Do you plan it out?

I wander the streets (some on a regular basis) just looking. Most often I will be attracted to a particular background, and then wait for a short while for something to occur. Hanging around in any location for more than a short time can easily draw unwanted attention, I’ve discovered! I was once challenged by two heavily armed policemen (not too common a sight in the UK) who had been alerted by a member of the public expressing concern for their security, or privacy (I never did find out which) I parted company with the policemen on good terms, though it did remind me that my actions were open to a range of interpretations.

Serendipity plays an important role in street photography. I believe it is the South African golfer Gary Player who is attributed as saying “the more I practice, the luckier I get”. My experience suggests that this might equally be true for street photography.

In the manner of a flâneur with my small camera on a short strap around my neck (and which is rarely lifted up to the eye) with a spare battery keeping warm in my pocket. It is tiring: not the walking so much as the looking. The concern is that ‘chance’ will provide an opportunity but which I am not sufficiently ready to take advantage of.

Tell us about your most memorable image or experience you’ve had with street photography.

By nature I generally seek to avoid confrontation so the episode involving the police, which I’ve already mentioned, is one which I will remember. But for a memorable image I’d suggest the following photo. It demonstrates several of the characteristics I strive for in my own work. 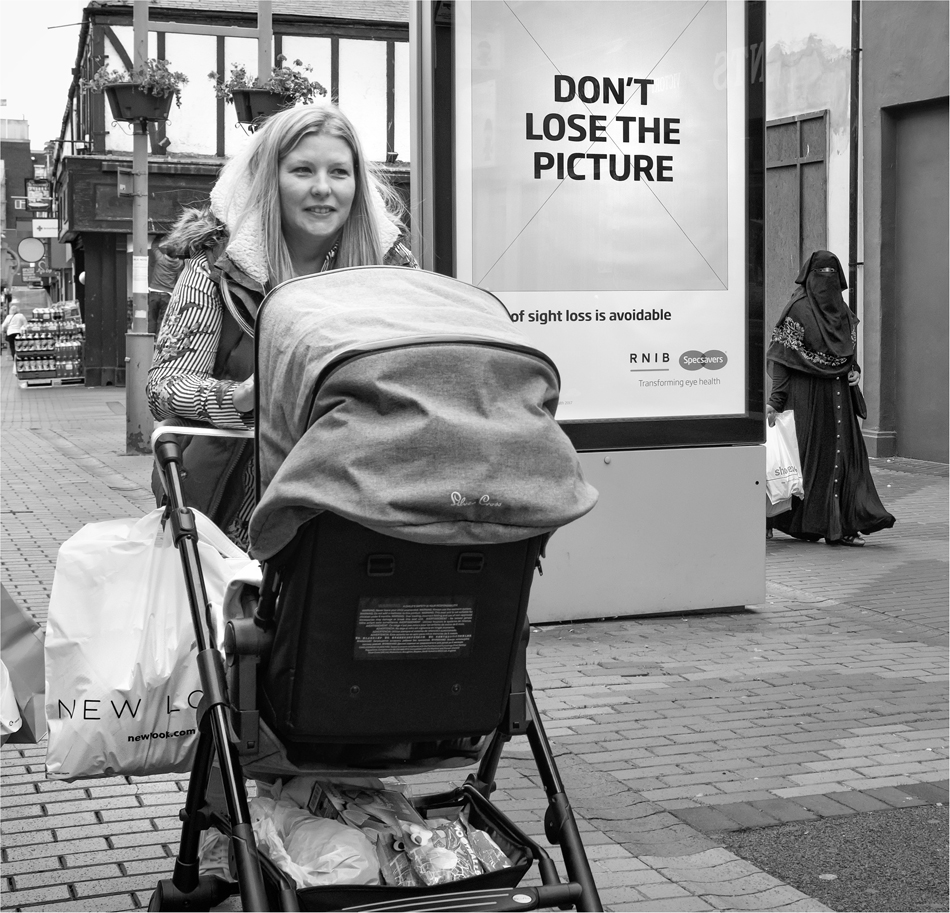 Drawn initially to the advertisement stand, which highlights a state of mind I guess many street photographers experience, the intension was to wait for something interesting to occur in the street to set against the message. That these two women entered the frame when and where they did was entirely serendipitous. What the photograph does, in my mind, is ask questions. It highlights an aspect of contemporary society about which many hold different views and around which are many sensitivities. I hope it is difficult for anyone to view it without reflecting on where they might stand. If only I could produce many more photographs, drawn from the real world, which ask the viewers to examine their own thoughts.

Although the content is different, the same approach to posing questions might be said to apply to these image too: 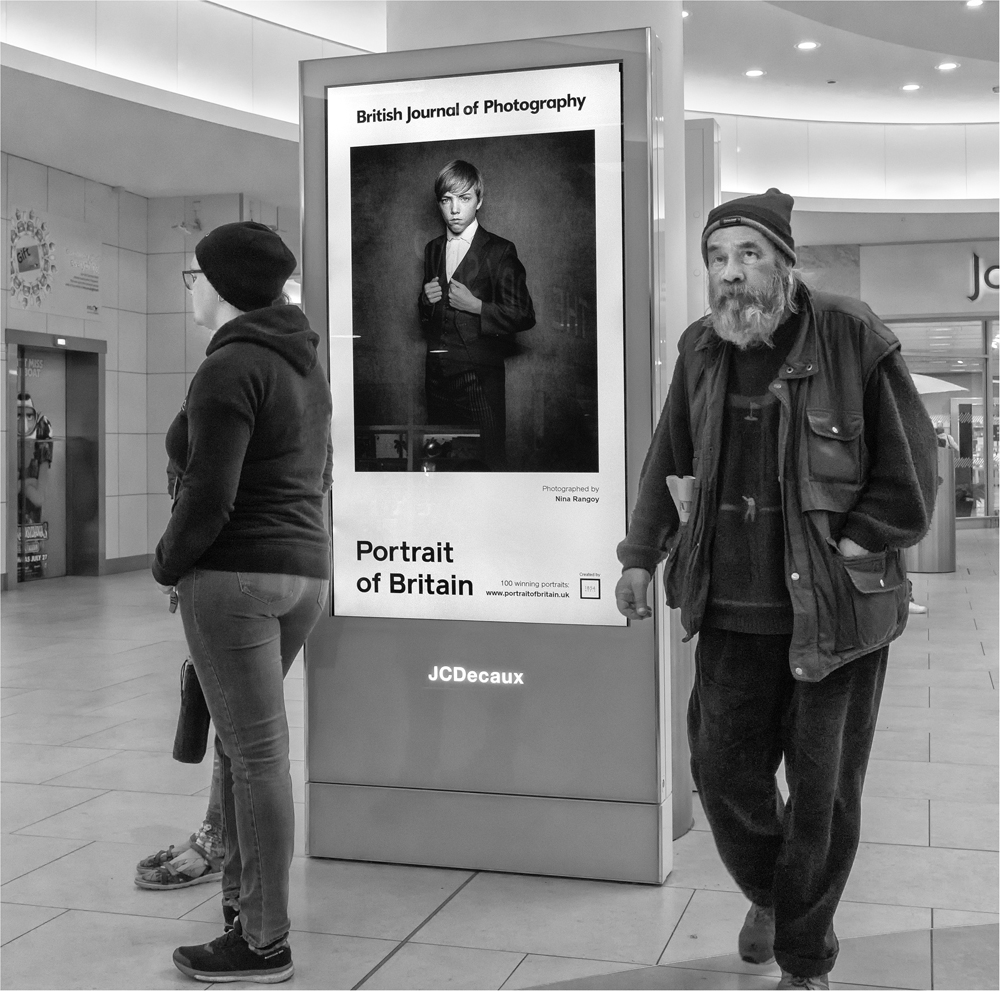 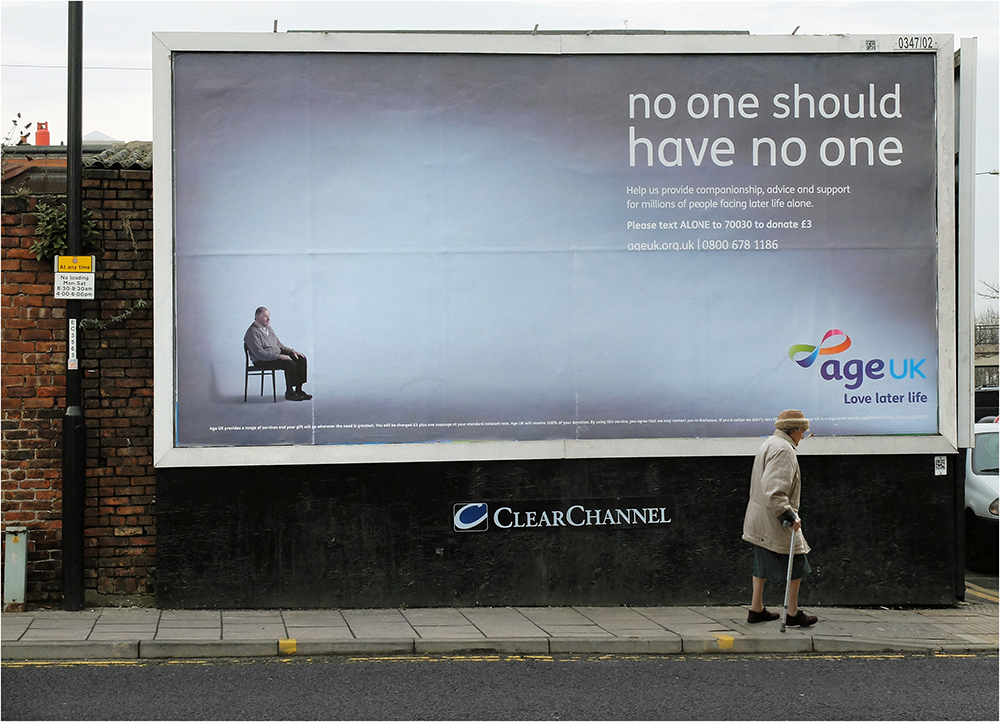 To Love and To Cherish, Till… 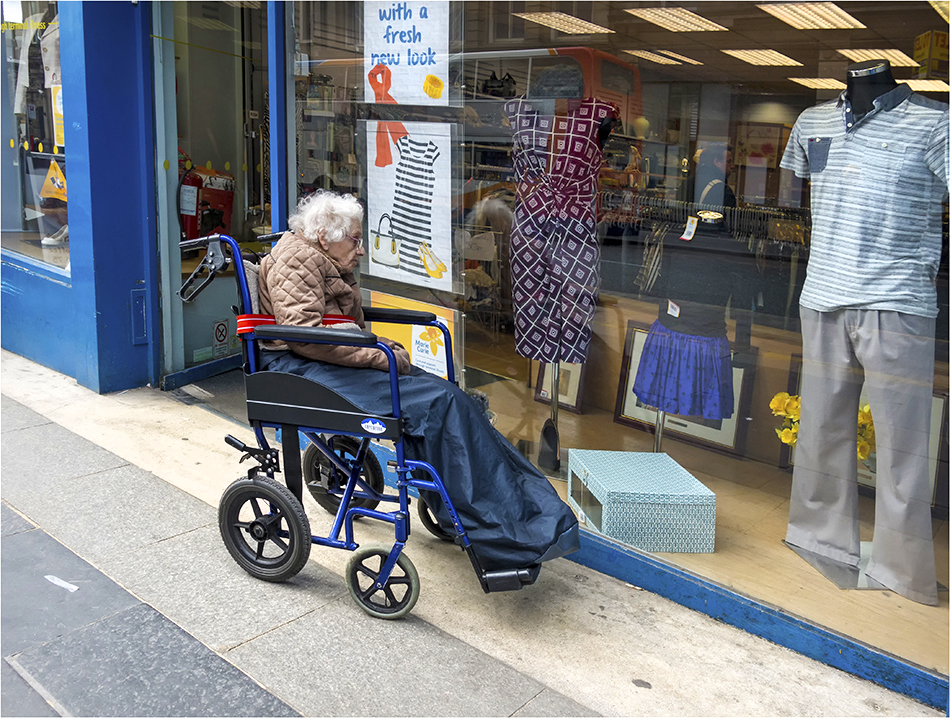 What do you hope to transmit to your viewers in your street photography images? What is it that you hope they see?

A came across the expression “what you see depends upon where you stand” a while ago and can’t help think how appropriate it is if applied to street photography. What you choose to point the camera at, and what connection you seek to emphasise within the frame will reflect ‘where you stand’ in your mind. (I’d suggest) What others see will reflect where they stand. So my hope is that viewers will recognise any questions which are implied and pause long enough to seek their own answers. It is for this reason that I have used this as the icon for my presence on Flickr:

My guess is that some seeing this for the first time will quickly make sense of it, others might take longer. It’s a mindset thing!

That said, much of what I produce does little more (at best) than raise a smile. 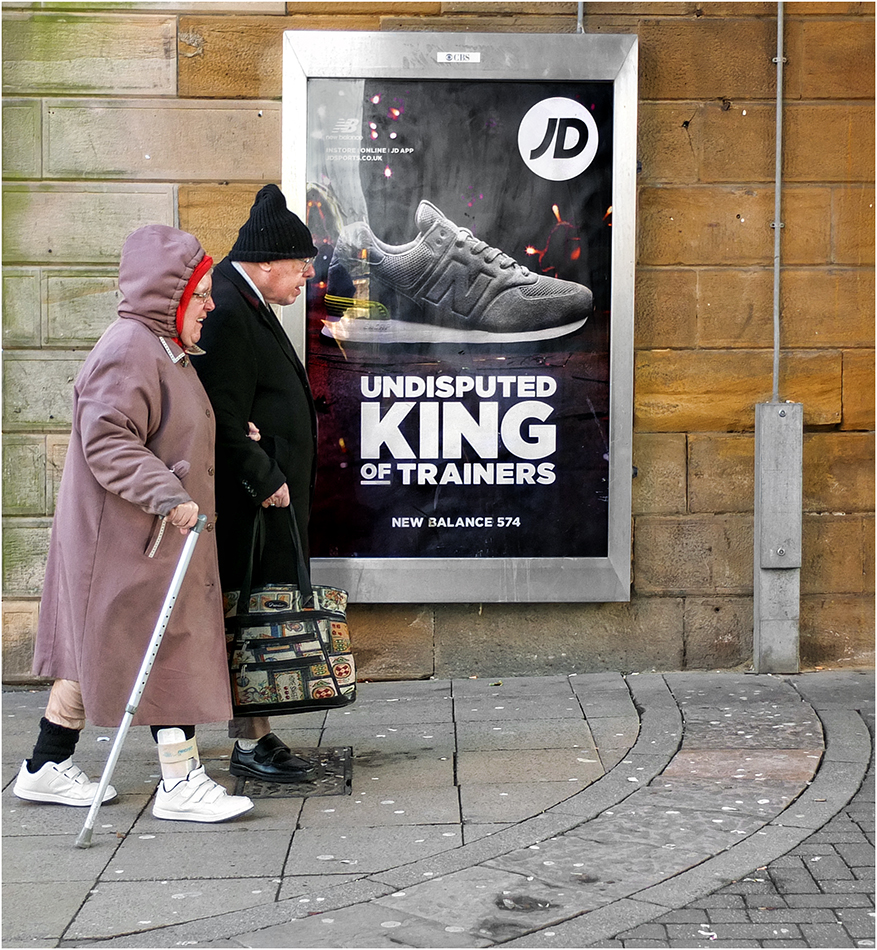 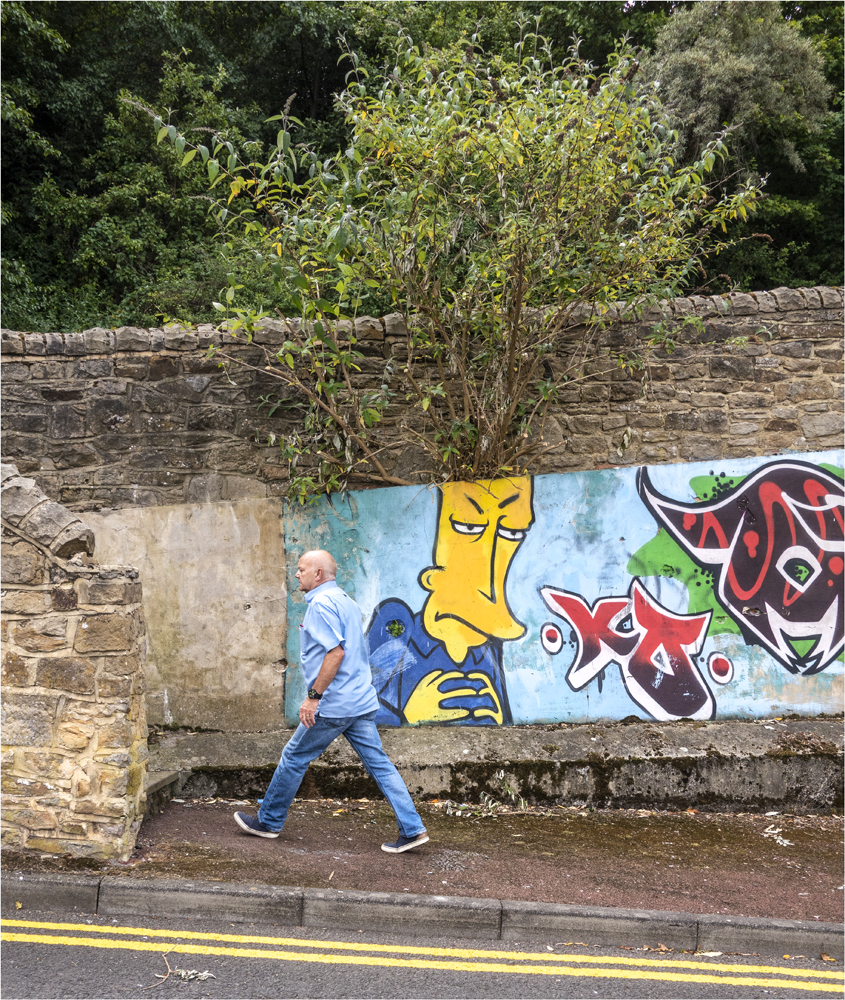 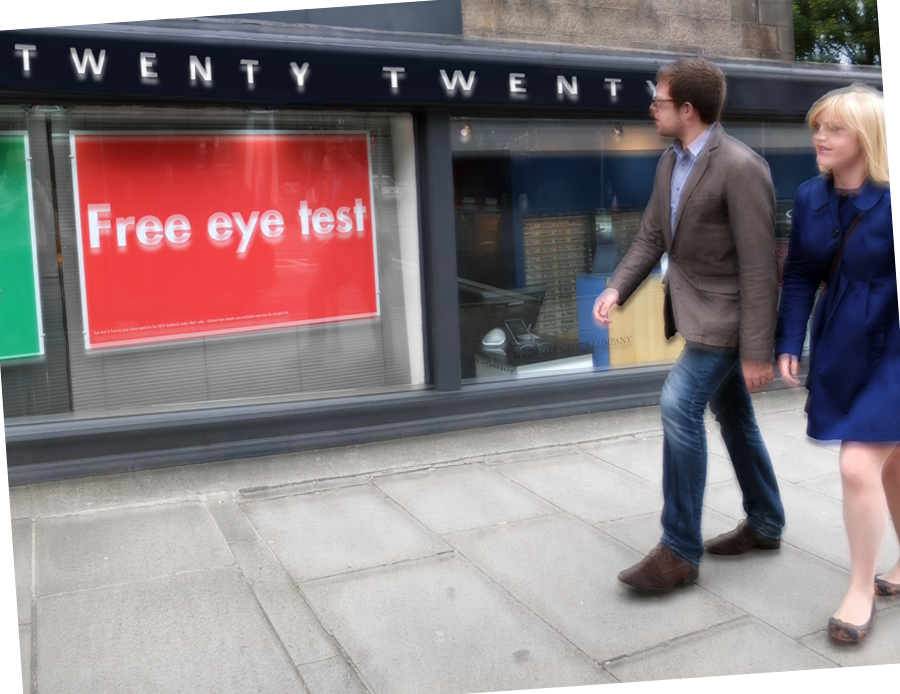 Editor’s Note: To learn more about Alan and see more of his work, be sure to visit his Flickr account and his website. Alan was selected from our Flickr group (Street Photography Magazine), where we regularly choose photographers’ work to be published in our magazine.