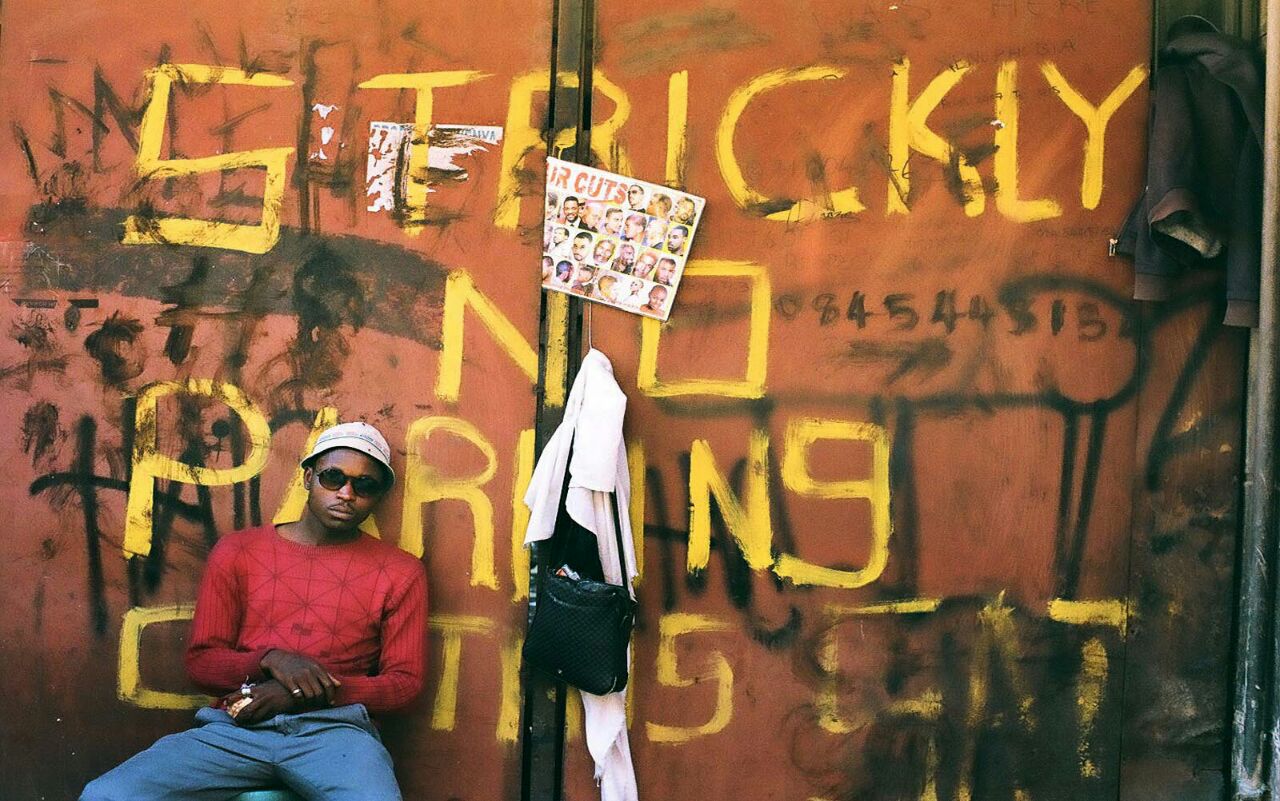 Over ten years I have been documenting the city of Johannesburg. I have realized that the life can be indefinable and intricate here. Often, people overlook city objects that they see every day. As someone who is daily navigating the city, this whole experience has forced my eye to encounter public and private spaces, movements, objects, people, transportation and buildings, thus shaping my photographic eye.

My work revisits the occidental street photography tradition within contemporary streets of Johannesburg. I’m particularly inspired by the French Eugène Atget (1857-1927), the Americans Helen Levitt (1913-2009) and Joel Meyerowitz (born in 1938). I’m also inspired by research in social science which seriously talk about streets like The Metropolis and the Mental Life published in 1903 by the German sociologist Georg Simmel (1858-1918). 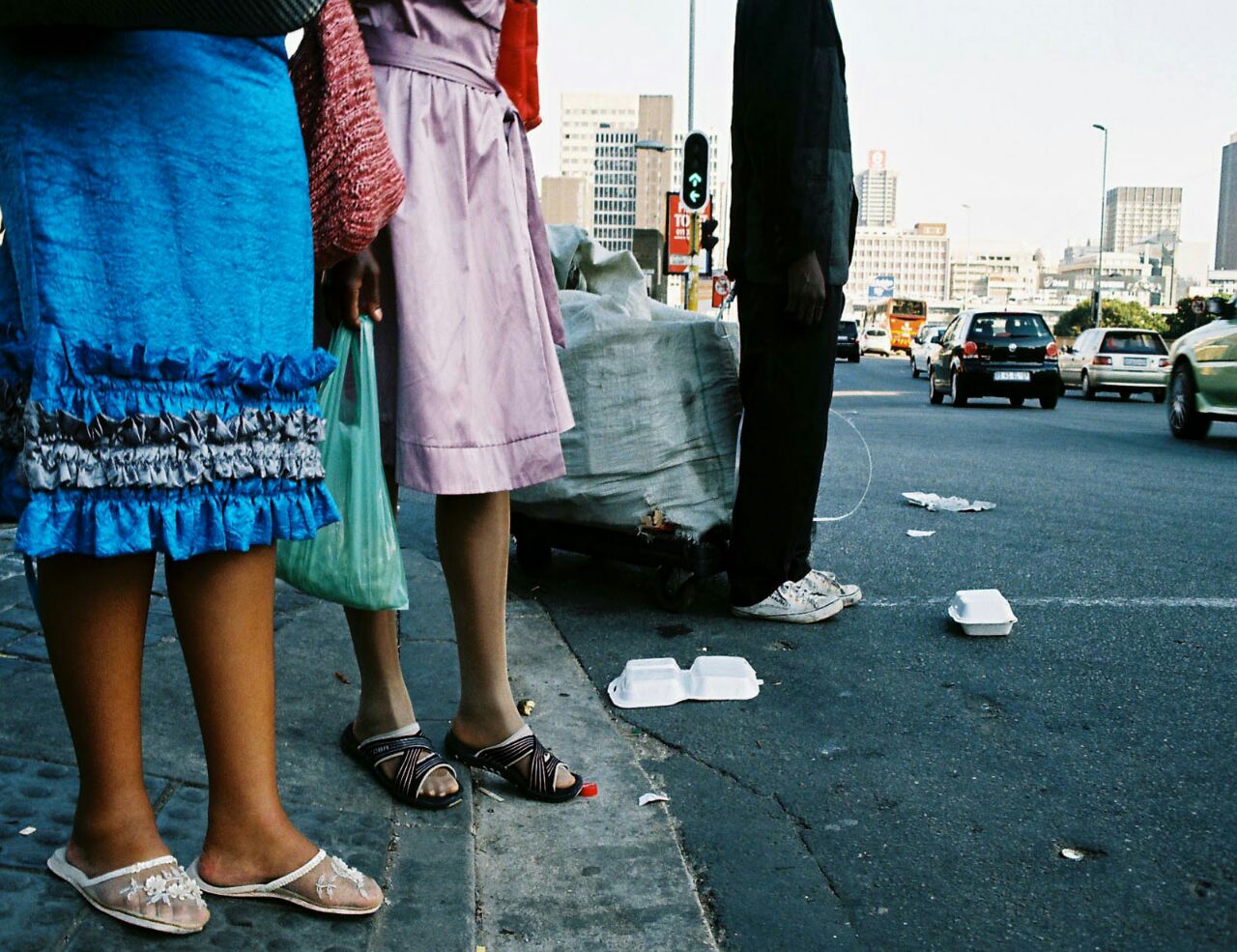 My whole idea is to tell the city stories that have not been told, even in mainstream medias, because they could not be reached easily in a short time. Even if I rely on international photographers and researchers, my stories are close to people’s lives. I want my pictures to be understood by anyone on the street. That’s why I walk with themes in mind in order to tell, through photos, a city story about daily realities of the people.

Many times, I have photographed the city moments in happenstance, and this has made me realize that street photography is an occurrence of being in a space, in the right time, at the right moment. That has also created a feeling of taking photographs consciously and subconsciously in every space where I avail myself carrying a camera. 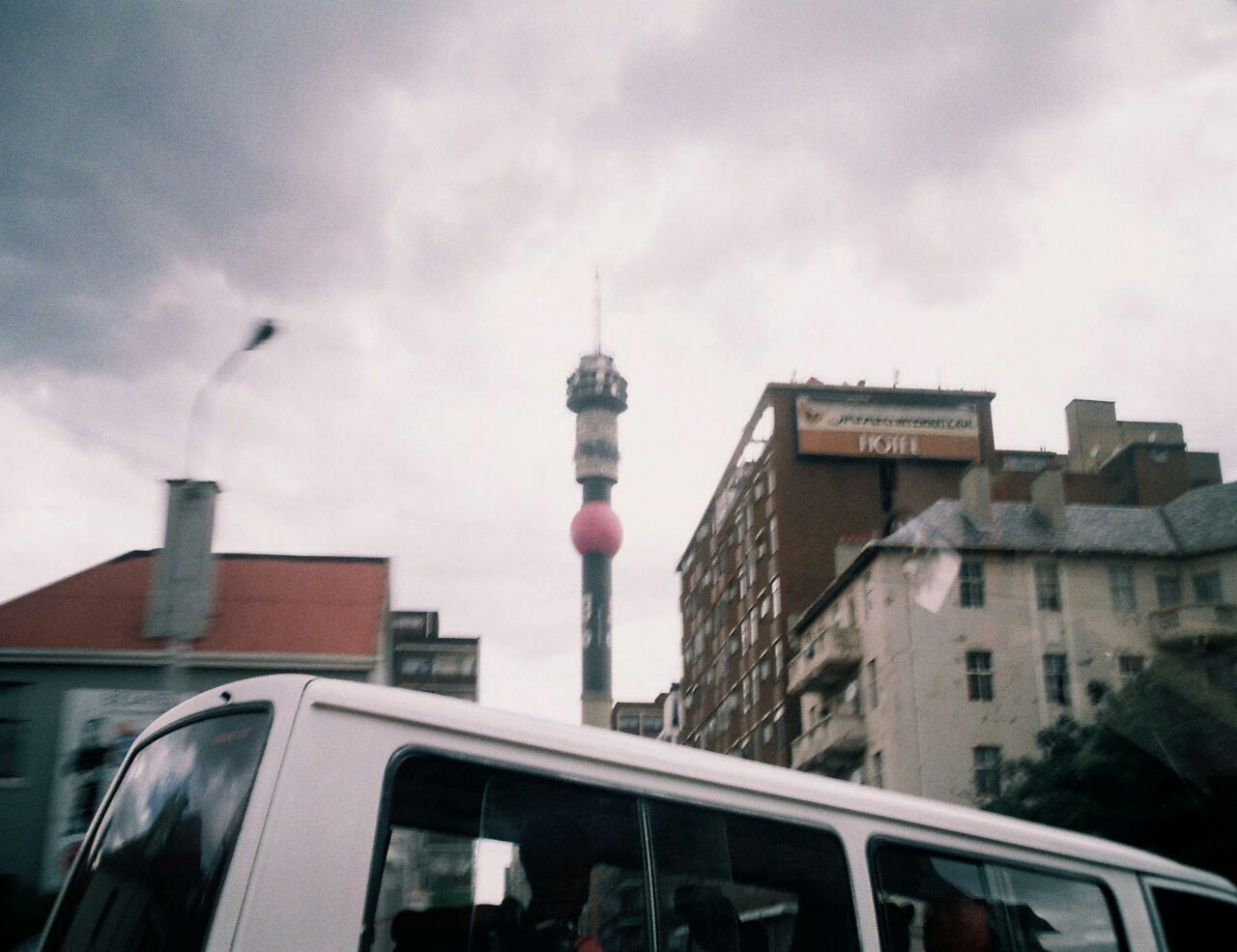 For this project I was more particularly inspired by worldwide photographers: not only by American photographers like John Vachon (1914-1975), Karl Struss (1886-1981), Bill Brandt (1904-1983) but also by the French photographer Charles Negre (1820-1880), the Hungarian-born Andre Kertezses (1894-1985) and the Mexican Manuel Álvarez Bravo (1902-2002). Walking the city streets of Johannesburg making photographs is like watching the slide show video, through a camera viewfinder. Objects are being left on the street, clothes are hung on the outside windows of the building by the tenants due to overpopulation and laws that are being forced by the landlords. Everything is happening in such a way that the people have taken over because of their new informal law they have implemented. 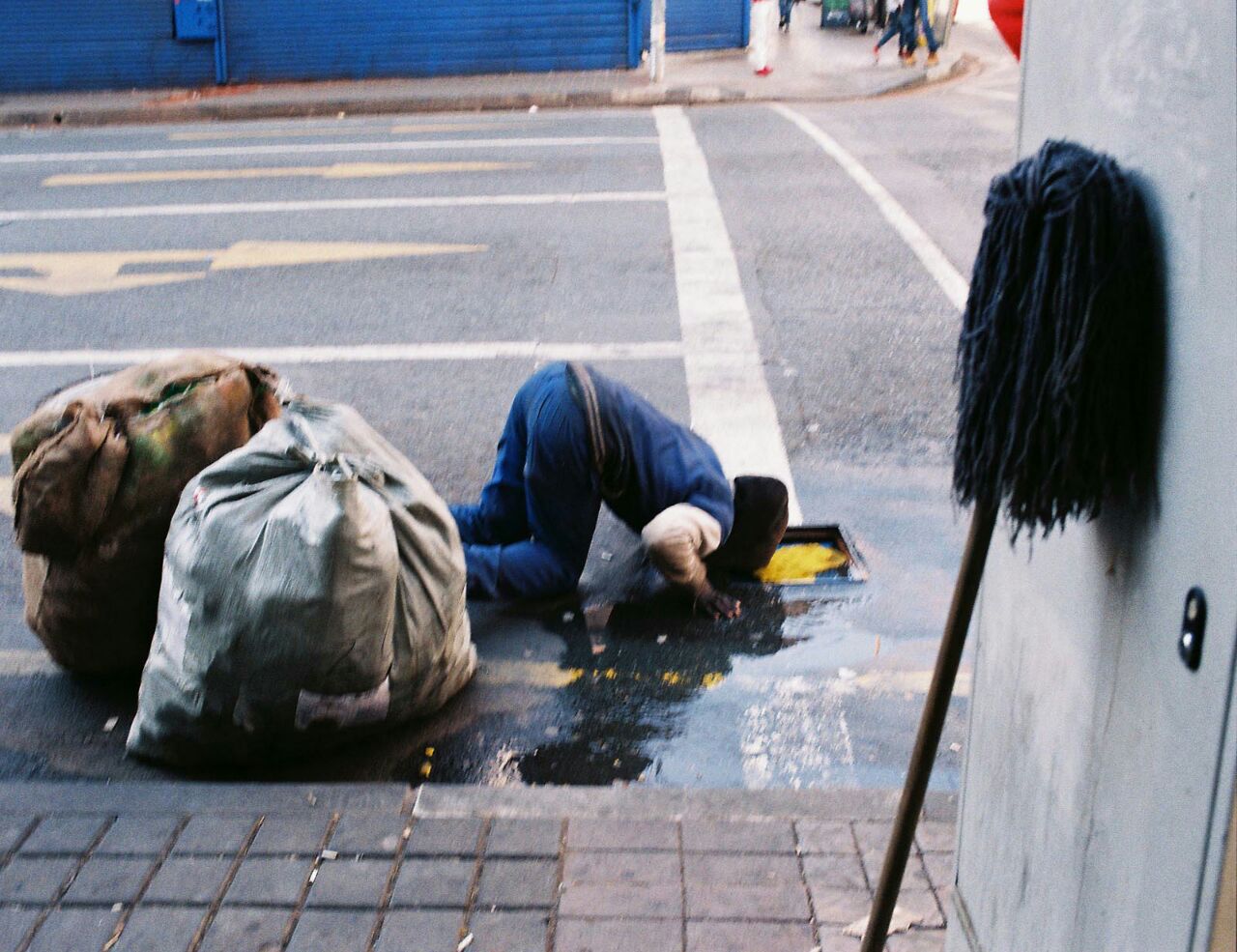 This work is looking at the new revolution that is occurring in the complex city of Johannesburg, especially ways of making a living from recycle material collecting and street trading business operating illegally on the street pavement. The daily life harshness reality includes women – some local others from the neighboring countries – who are involved in the ways of making a living. Their businesses operate on the street for the sake of making ends meet for their children. Irrespective what challenges they are facing, they make sure they create business on the street that will sustain them. 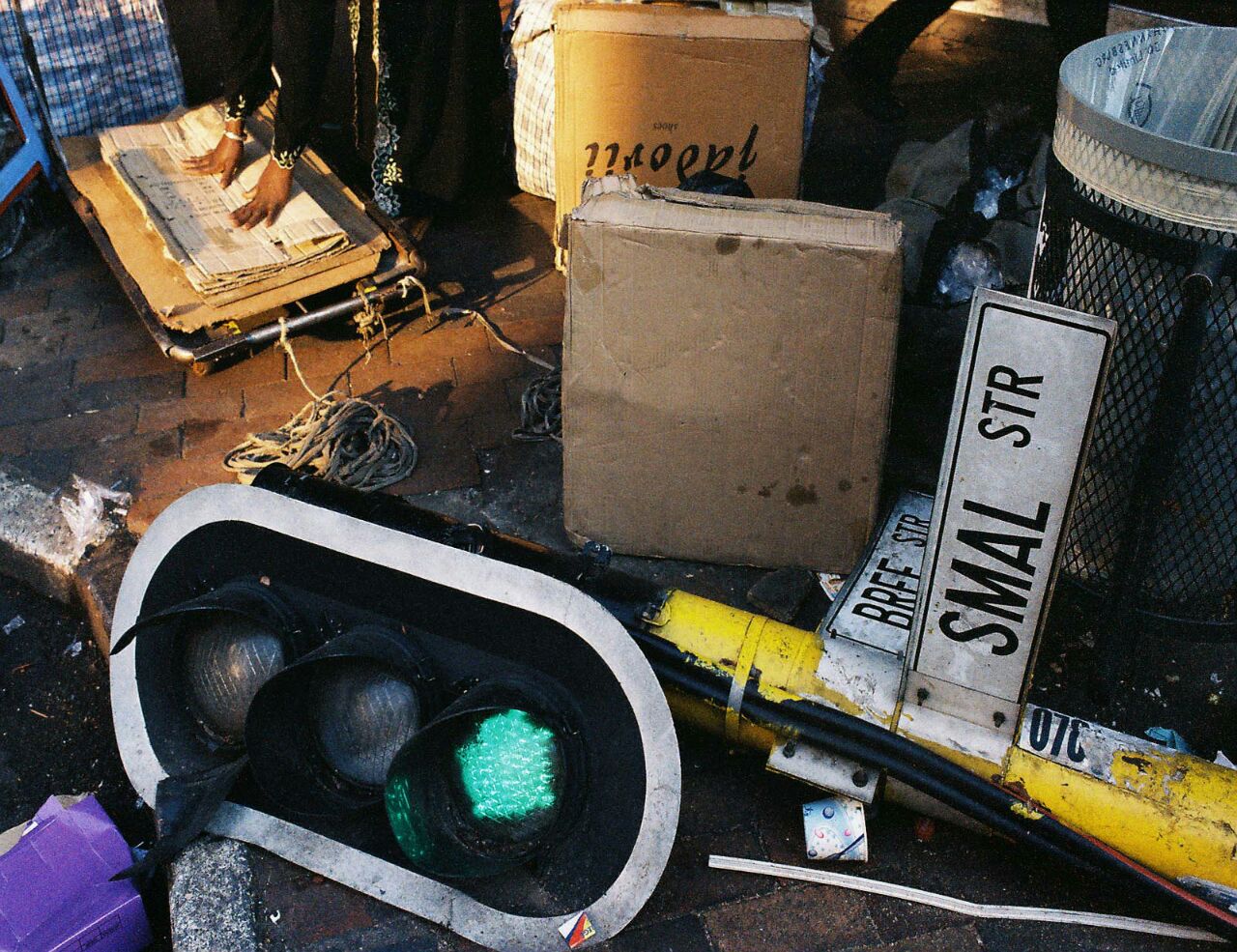 Old structural buildings which have been dilapidated are no longer used by the old apartheid government and companies that left when the black government came into power in 1994. People started consuming those buildings without consulting with the city authorities, some of them are being renovated today. During winter time (April-August) the people are being forceful evicted by the Red Ants (individuals who being hired to forceful evict the illegal tenants) and their belongings will be thrown on street. Women and children will suffer the most in the that kind of situation when they are forcefully thrown out on the street.

The photos even look at the issue of unemployment and homelessness that has resulted in people creating jobs for themselves by randomly occupying the city spaces and street pavements. Other corners of the street are occupied by street vendors, mostly young men, selling vegetables, snacks, pirated DVDs, etc. There are only a few select places where street traders are not allowed to operate their business. If they are found selling in those places, their stock can be confiscated and they can even get arrested or be fined a certain amount. On the pavement, the pedestrians find it difficult to walk freely. At the same time, the informal street trading is being supported by the same passengers through their purchases. 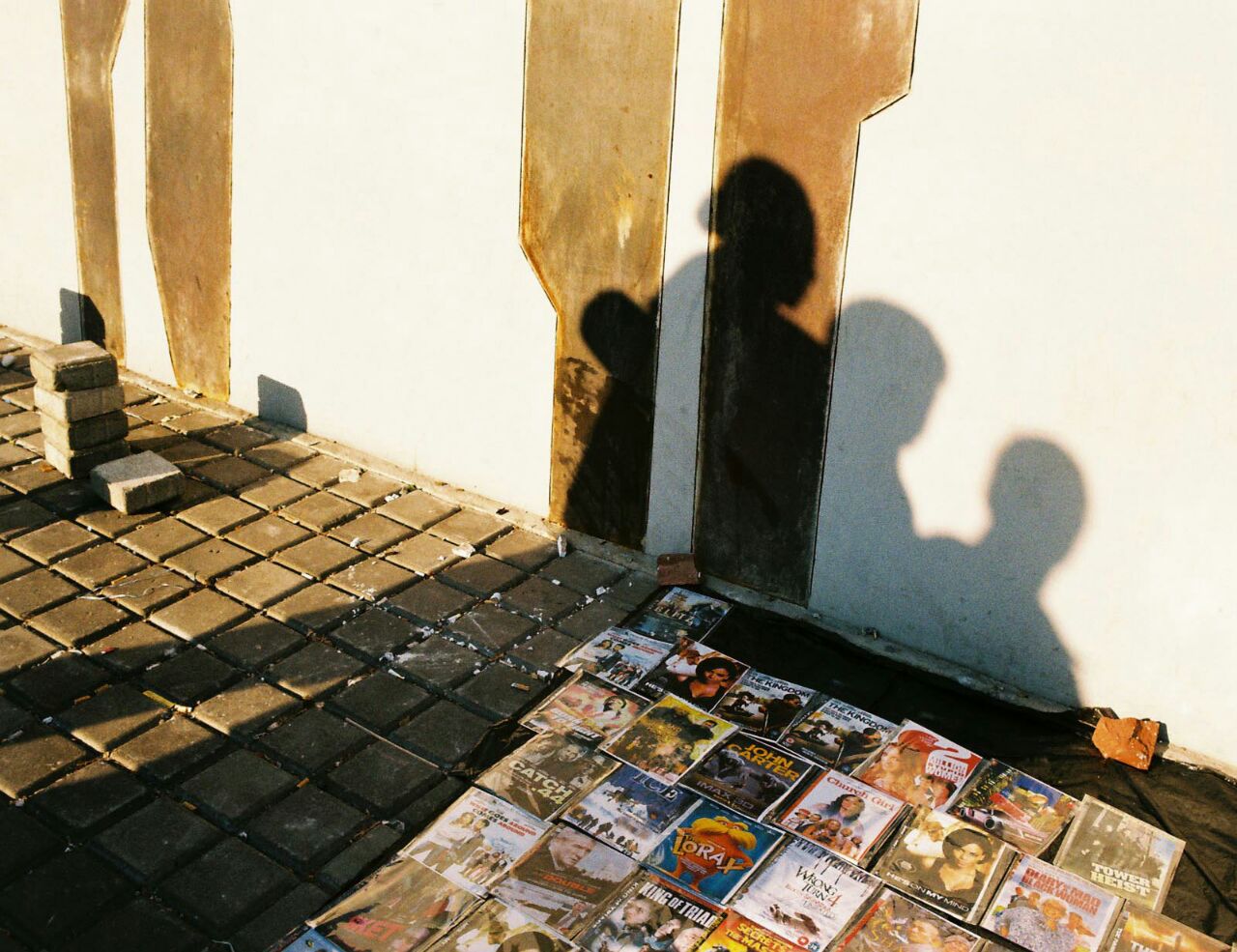 As a photographer navigating the city streets, taking street photographs, sometimes I stand at the corner and carefully look all around me moving my eyes quickly to grab an interesting photo on the fly. Then I will immediately start to take photographs. Or I will follow someone that I think is doing something interesting like someone pulling a trolley or a woman carrying something on her head that is interesting. When I realize that the composition is interesting, I start taking photograph without being noticed. Sometimes I am invisible in the eyes of the people that I photographed, which allows me to get perfect moment of the occurrence of the situation. I make sure I get the moment and the photograph is well composed. 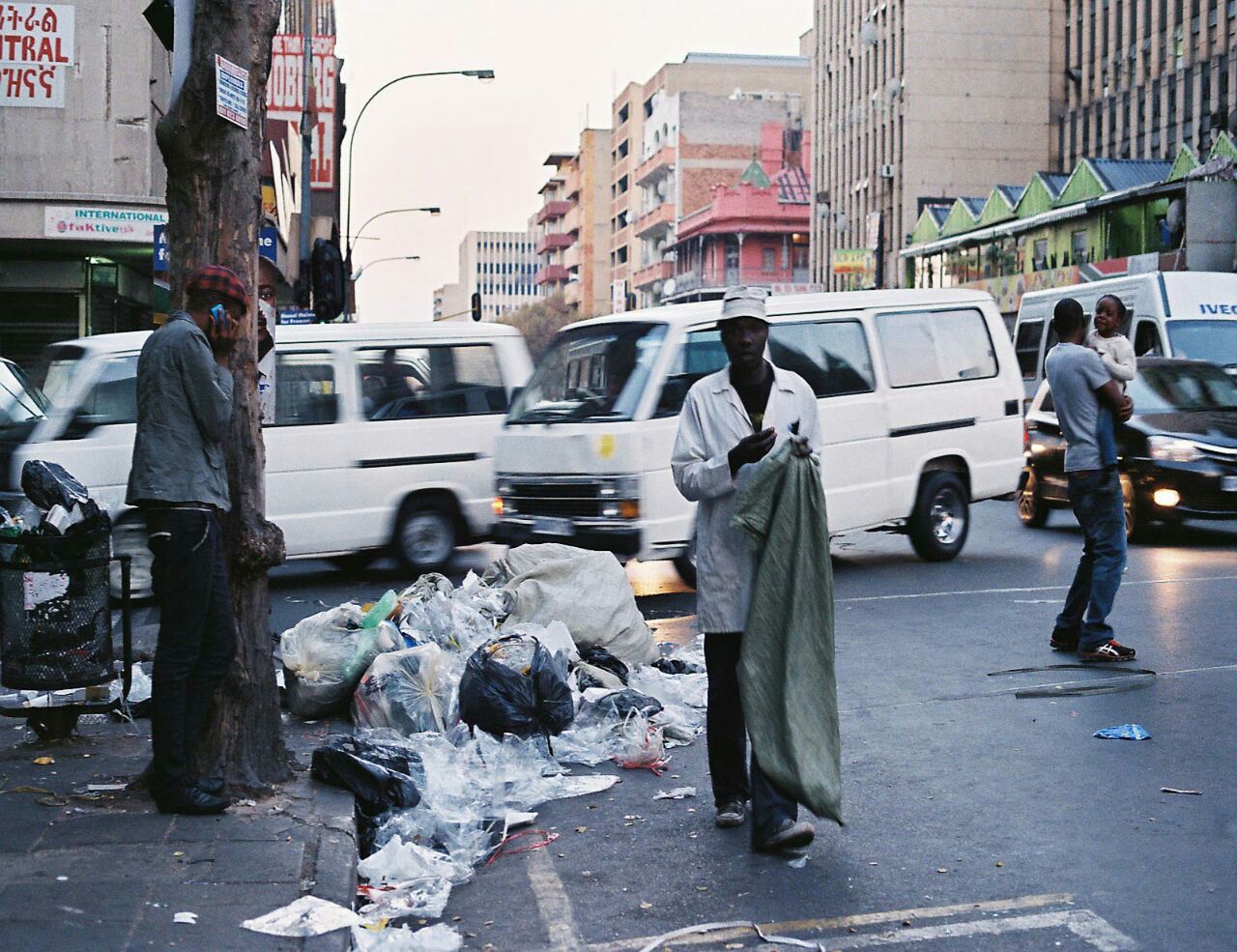 During most of these situations they exposed themselves to me, at some instance I visit certain places that are busy with people or I walk in the silent streets that have few people and are not very busy. That allows my stare to search for a small moment created by people who are enjoying the loneliness of the space. 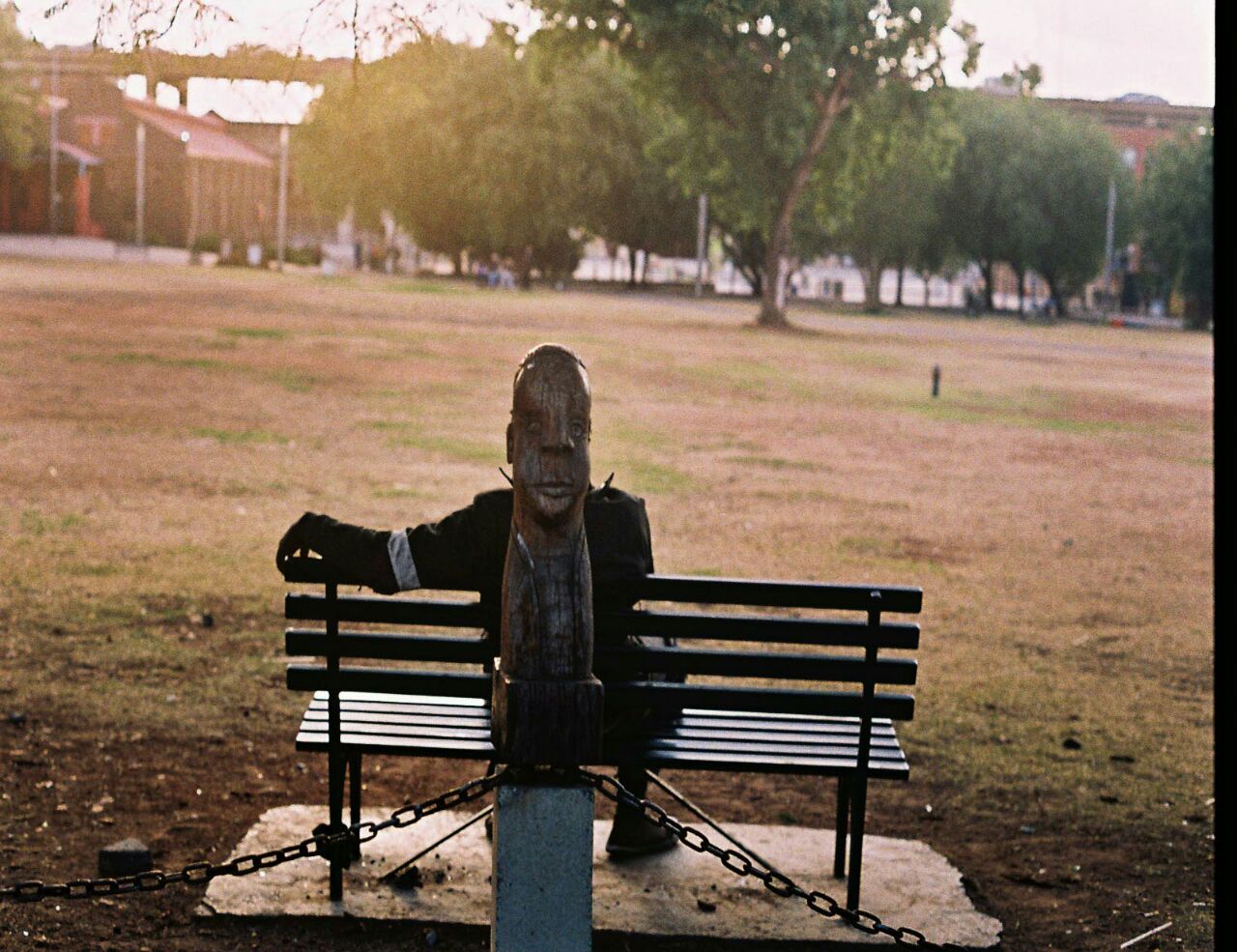 In other instances, I create appointments or relationships with the people I want to photograph in spaces. As I walk on the street, I ask for a picture if I see something interesting in someone’s attire or his/her looks. I explain who I am, why I want to take photo of that person. It might be something that is triggered by the fashion style, in manner he/she is dressed, but that person is someone in distinguished way of dressing. When I print the photos, I offer them to the people I have photographed. Some of them will not even bother if I don’t bring them the photos. But I make sure I explain my story very well and what I will do with photos to everyone that I have photographed. Either they will be used in a book, exhibition, in overseas publication or as the online photography market that deal with images. 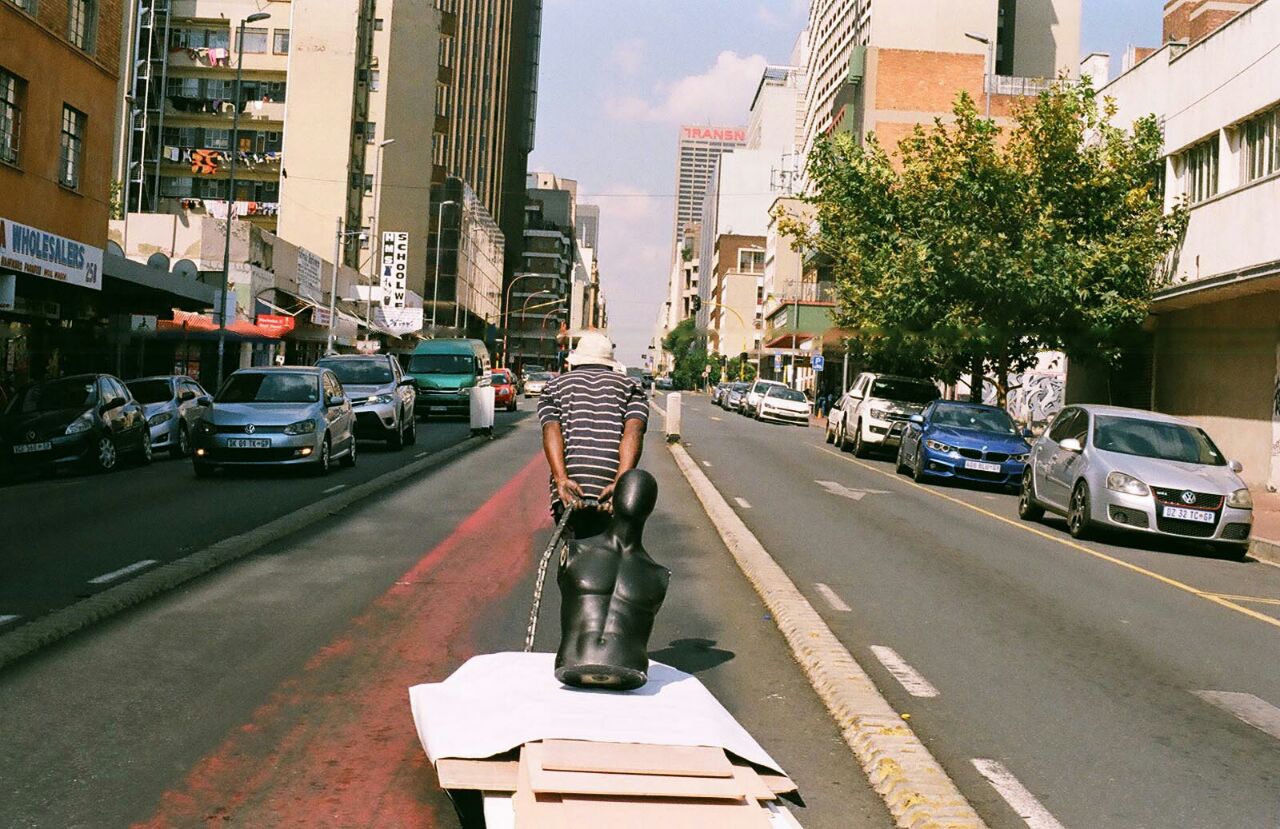 An analog camera is the camera I use when I take photos on the street. It gives me strong sense of feeling of what am I doing. I become much more disciplined when I am taking photos, every frame counts when I am pressing the shutter. I use color film. I often take photos with expired film in order to question the speed and the beauty of photographs that are being produced in the modern age with digital cameras and the use of Photoshop. I am influenced by books made during the birth of photography. In its early times, photography was struggling in exposure and the photos were straight street documentary. 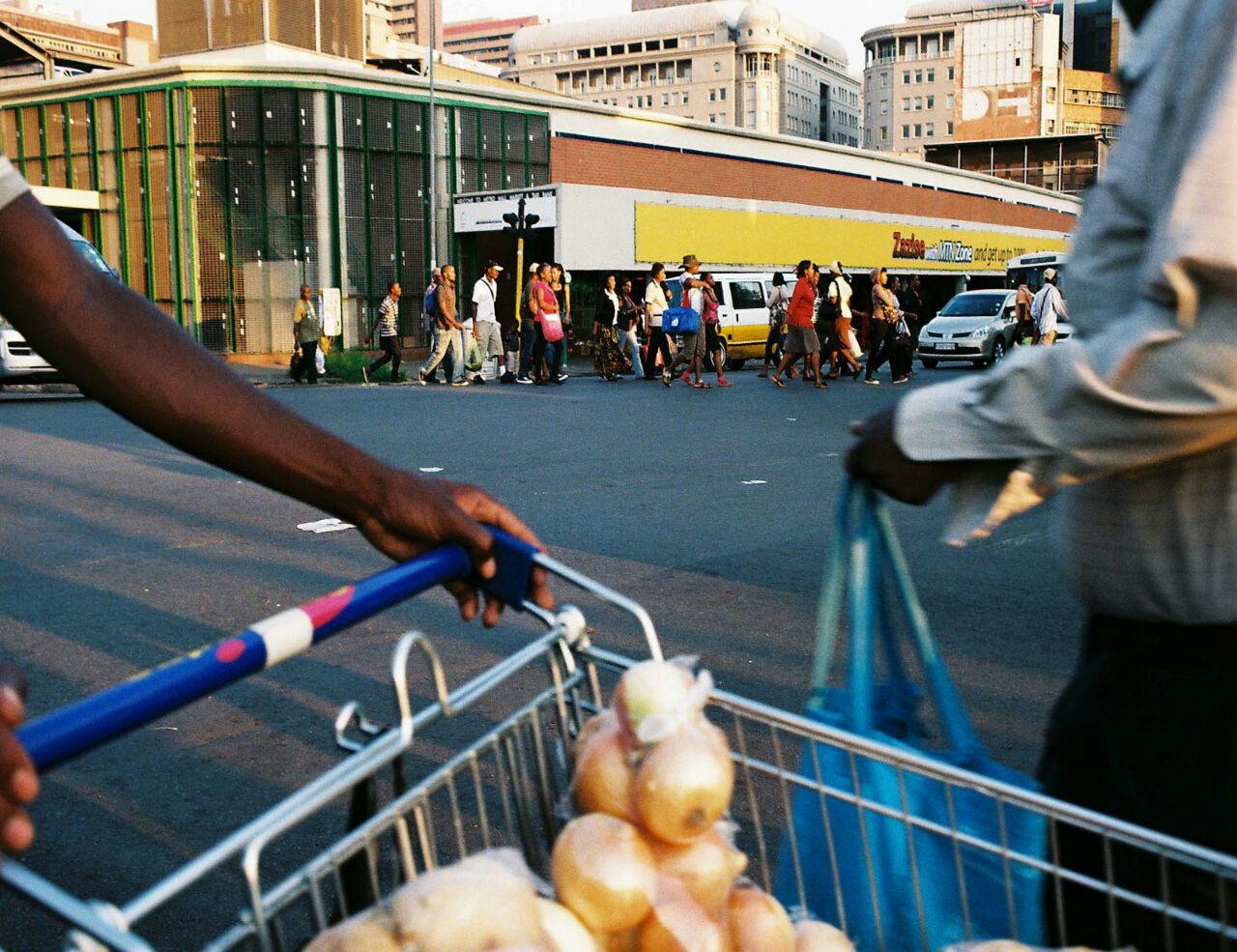 The work I have done – looking at the city each and every day – reveals slow changes that are happening in the city throughout years. Security is becoming tight in some places of the city, more especially in the central business district areas. Old buildings in downtown Johannesburg are being renovated into artistic hubs where artist and social business people can meet in restaurants, coffee shops and bookstores. Surely, in few years, the city I am presenting in this work will no longer be in the same state. In case of poor socioeconomic performances, recycled material collectors will either be swept, the city coming back to its knees, or be taken seriously like anyone doing a normal job in the city. In the best case, those who are currently imposing their presence in the street pavement of “Jozi” will peacefully fulfill themselves and contribute to the building of an inclusive and accountable South African democracy by living thanks to their skills in trade, catering, transportation, hairdressing, tourism, arts… 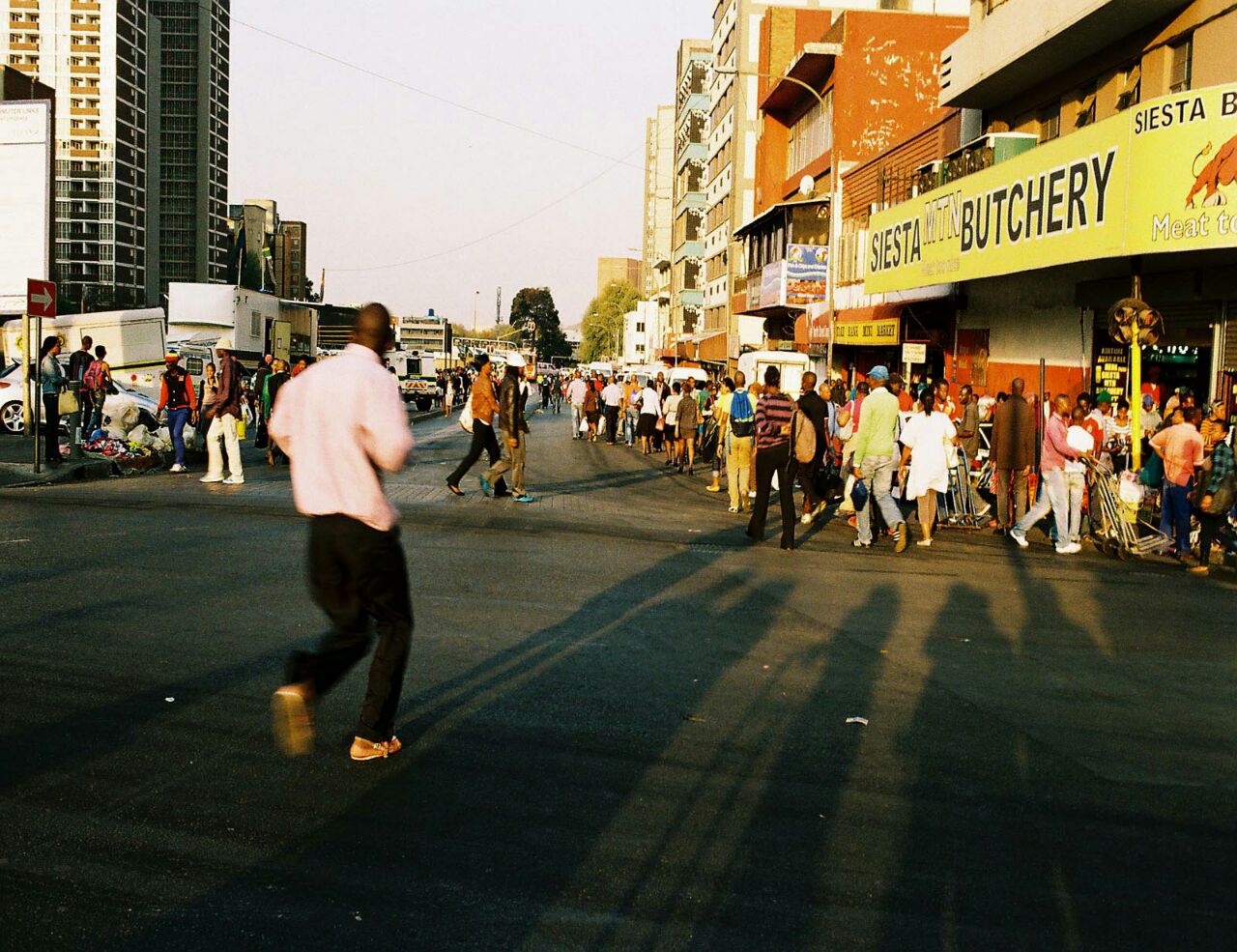