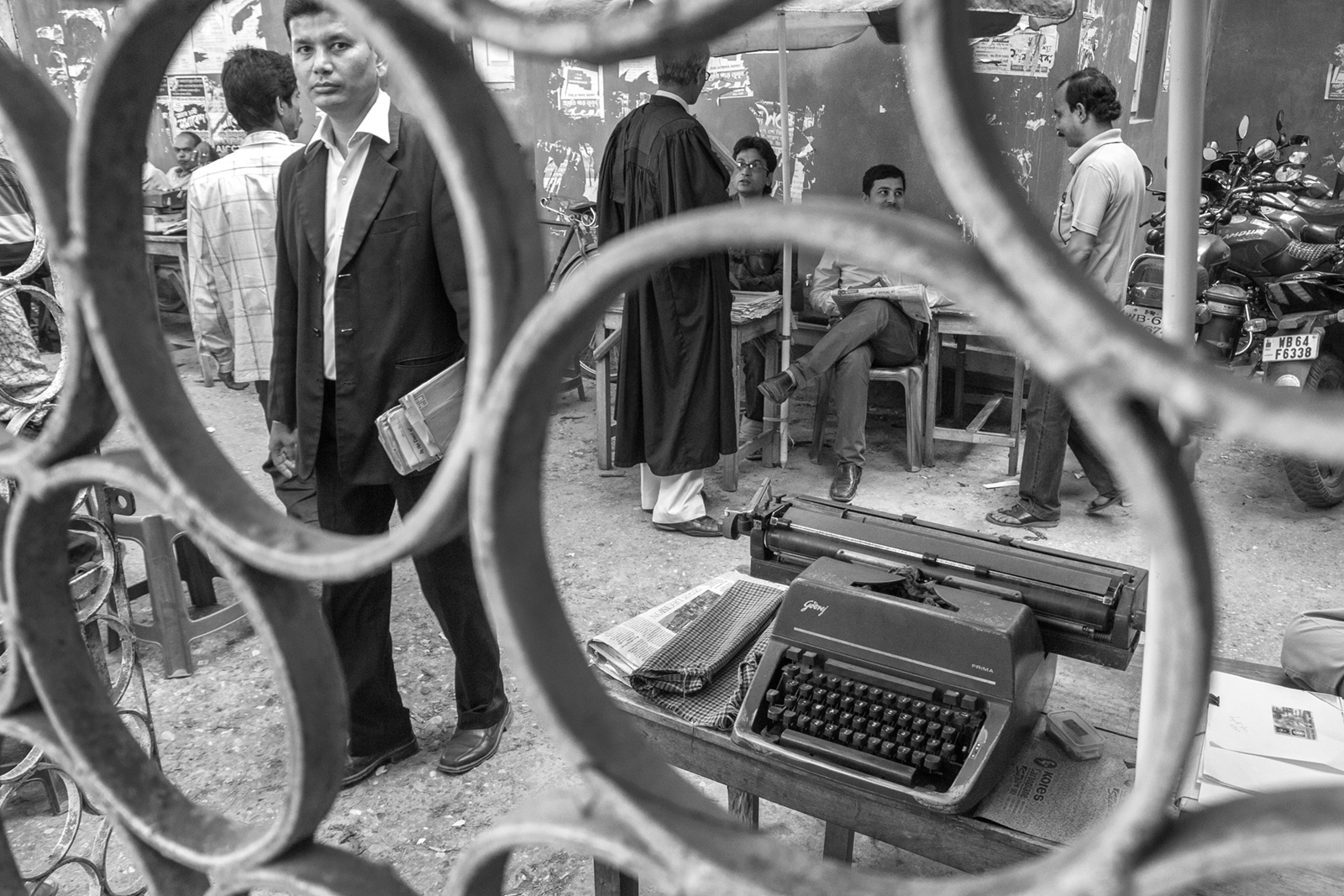 Once in a while, in the eventless sameness of daily life, there come moments which take us on a journey down Memory Lane and nostalgia kicks in. I was watching the movie Tin Tin with my seven-year-old daughter, when she pointed to a typewriter on the screen and asked, “What’s that?”

The last typewriter I had seen was 17 years ago, when I had applied for a government job exam. During the evaluation, our typing speed was tested on a typewriter. Finding a typewriter now seemed tough. The museums won’t have them as the device is not as old as to be kept in one. Asking my friends did not render any clue either. Finally, one of them told me that there are two things certain to be seen outside any judiciary court in India. A big banyan tree. And typists with their typewriters sitting under it. 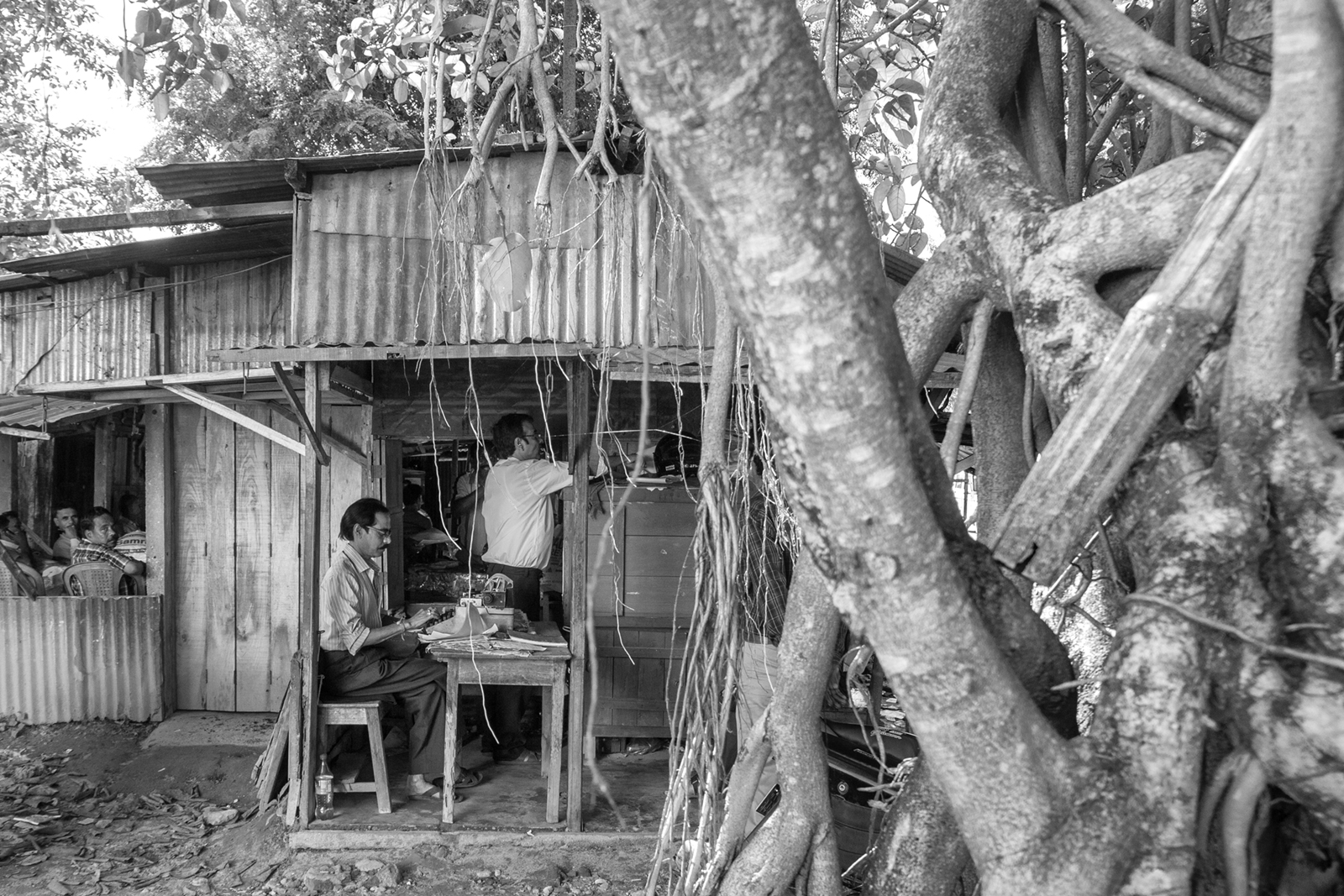 Unfortunately, or fortunately, I never had to visit a court before – but next day, there I was, loaded with my camera early in the morning, to document what seemed long lost in the era of smart gadgets. As excited as I was, I reached the court a little too early only to be amazed to find typewriters unattended, covered with plastic bags. Within the next 30 minutes, the court premise was full of advocates, notaries, clerks, attorneys, and other black coat professionals. 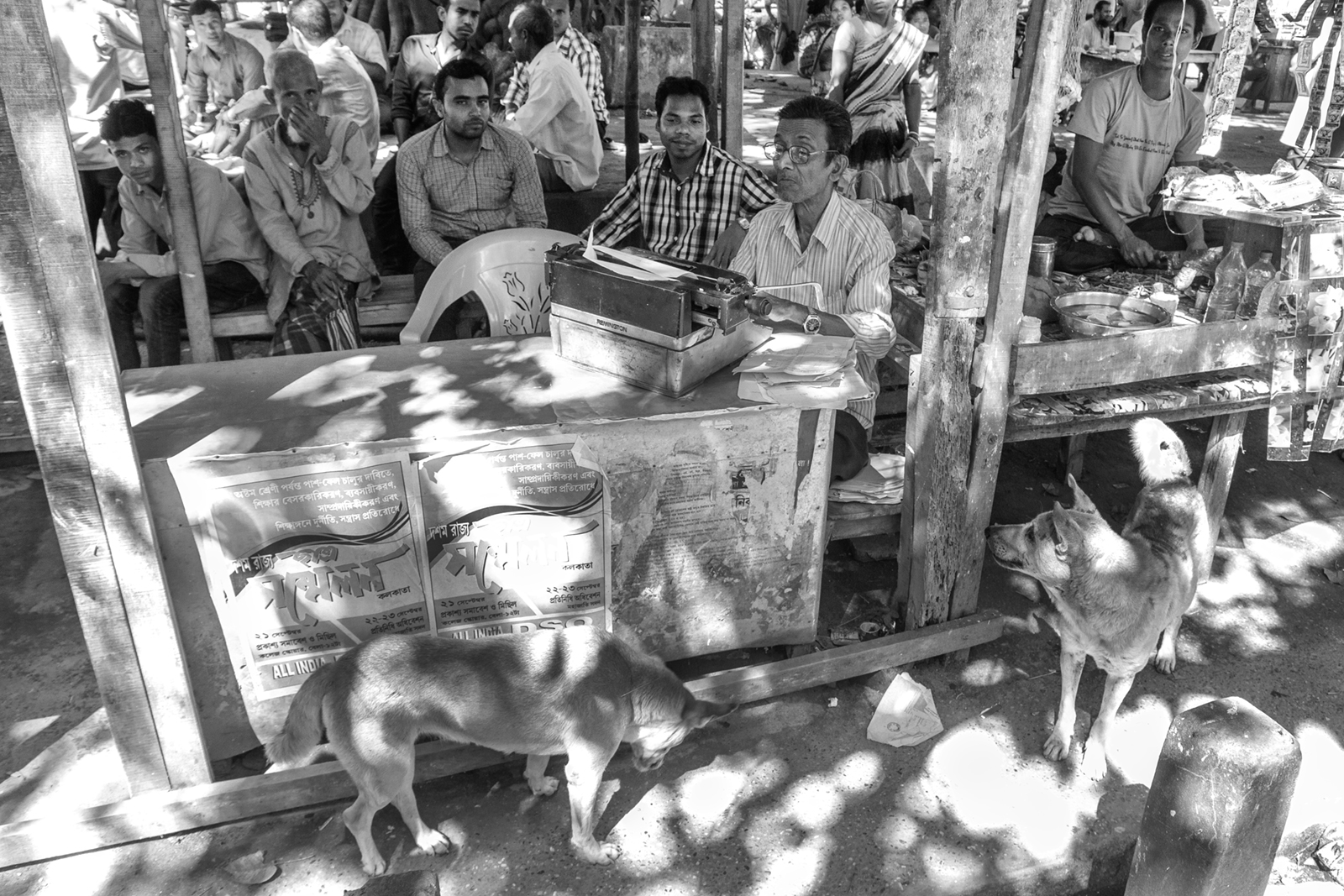 Soon I found that my small hometown court had around 7 typists. I met Mr. Ratan Dey who has been working there for more than 22 years and is regarded as one of the most experienced. He writes affidavits and agreements for land purchase. Some said that even advocates consult him at times. He uses one very old model of a Remington Typewriter manufactured back in 1980. The traditional favorites, Godrej and Remington, are among the widely used machines here. There are Halda or Facit models as well used by a few. 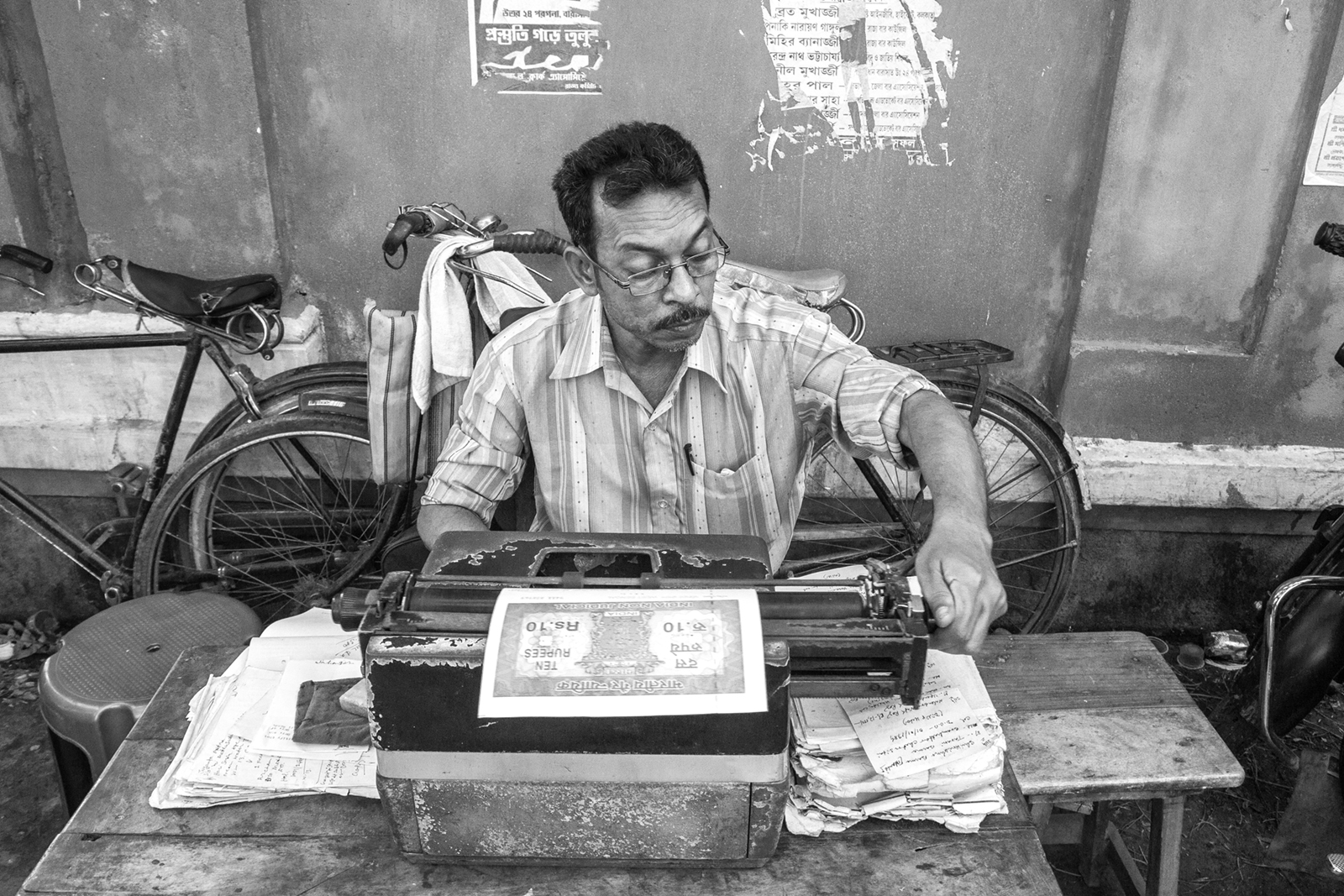 Not all the typists are as experienced as Mr. Ratan though. Some of them have just started and got their typewriters from their fathers. Mr. Khagen Das, 35, is one of them. He started typing here 3 years ago after trying his luck as a computer operator. While interacting, he was curious to know why I was taking pictures of the typewriters. I said I was anxious that these machines might become extinct soon. He laughed – “Typewriters are here to stay.” 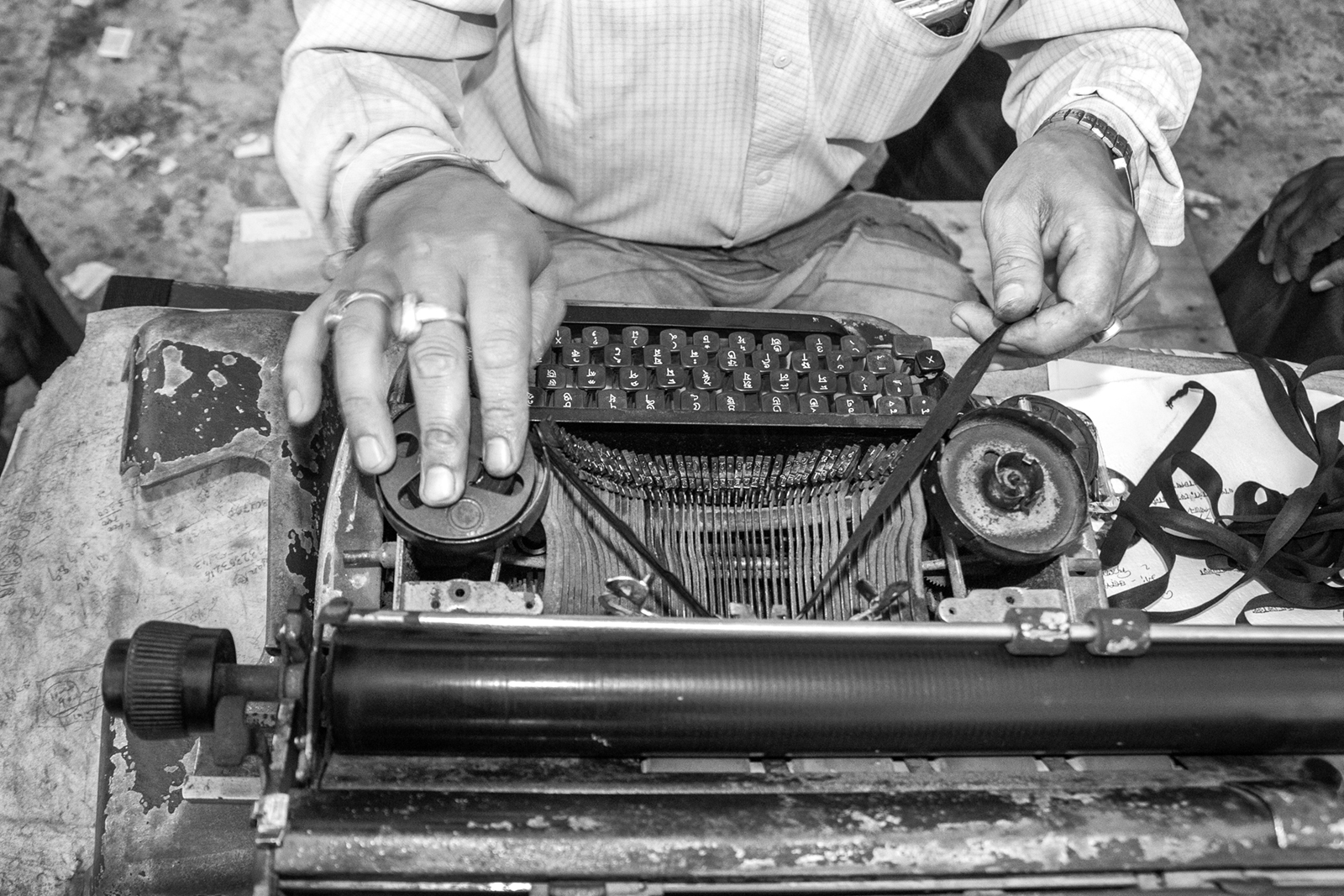 The relation between judiciary courts and typewrites dates back to long ago. In fact, the clang of the typewriter is a vital cog to the proper functioning of the courts. This good old device is what keeps the courts running, serving most of the needs of the people visiting the place. The typists type and compose documents for the advocates, as well as for the litigants who come here, day-in and day-out. 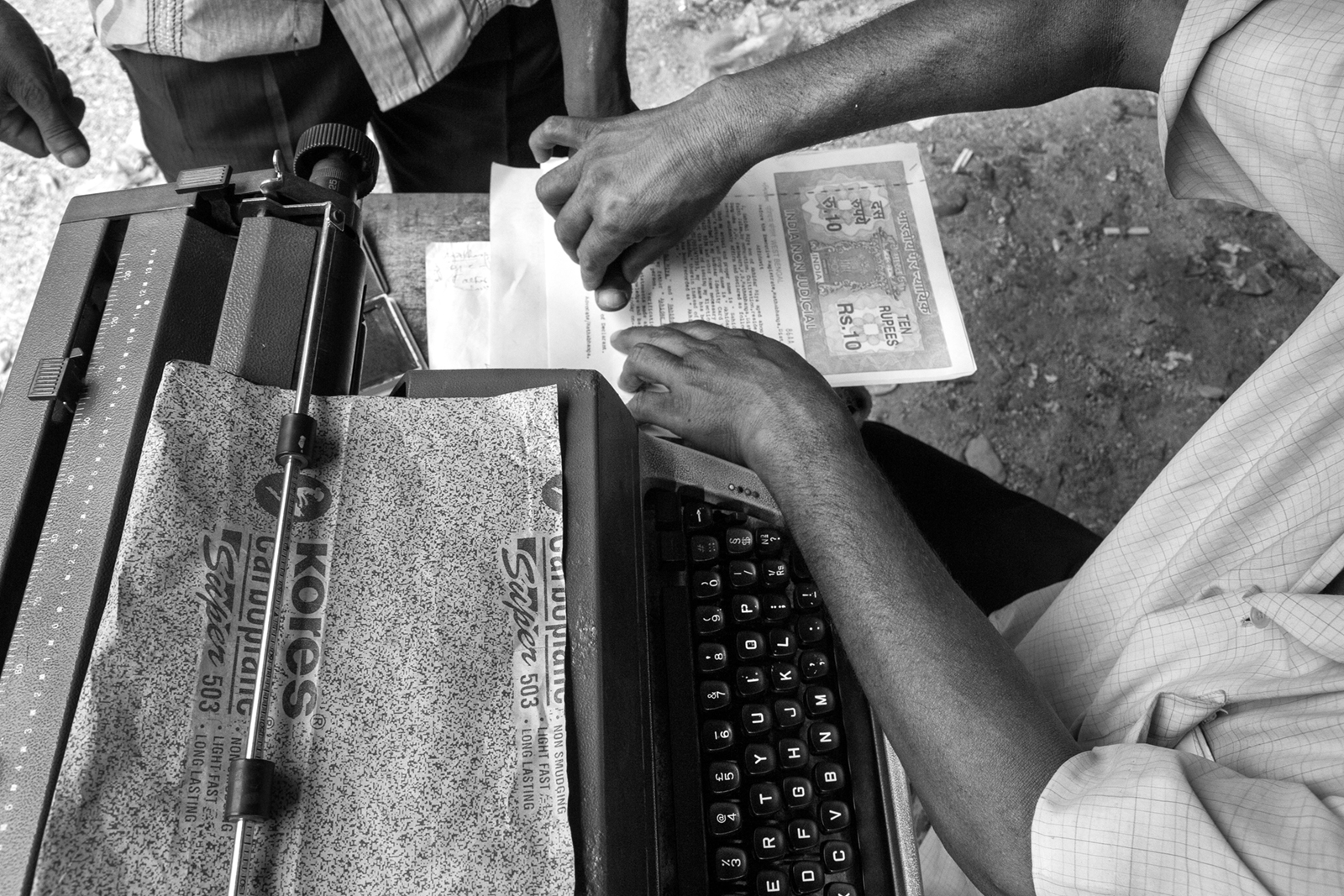 “Aren’t computers replacing them?” Mukul Kinnar, a senior typist who has put in over 25 years of service, puts things in perspective, “The typewriter may have lost the battle for relevance across many other sectors against the computers, but for judiciary work, there is no replacement for typewriters. The majority of the people who come to us are those with documents in illegible handwriting that cannot be presented in court. We, the experienced typists, analyze them and compose it in a manner that is acceptable to the court. New age inexperienced computer operators cannot do that. Typewriters do not require electricity, so it’s perfect for the open area outside the court. The maintenance is low and once bought it works for 25 years. The computer ink is costly while a typewriter ribbon costs only 60 – 70 Rupees. Computers, the printer along with it and other electrical equipment take more space where as a typewriter can just dwell in a small table. And above all, loyal customers and most senior advocates prefer their documents typed on a typewriter. As a result, the computer is out of question in this space. Yes, there are a few but the number is much less. They face frequent power cut issues. We do more work effectively than the computer operators,” explained Mr. Mukul. 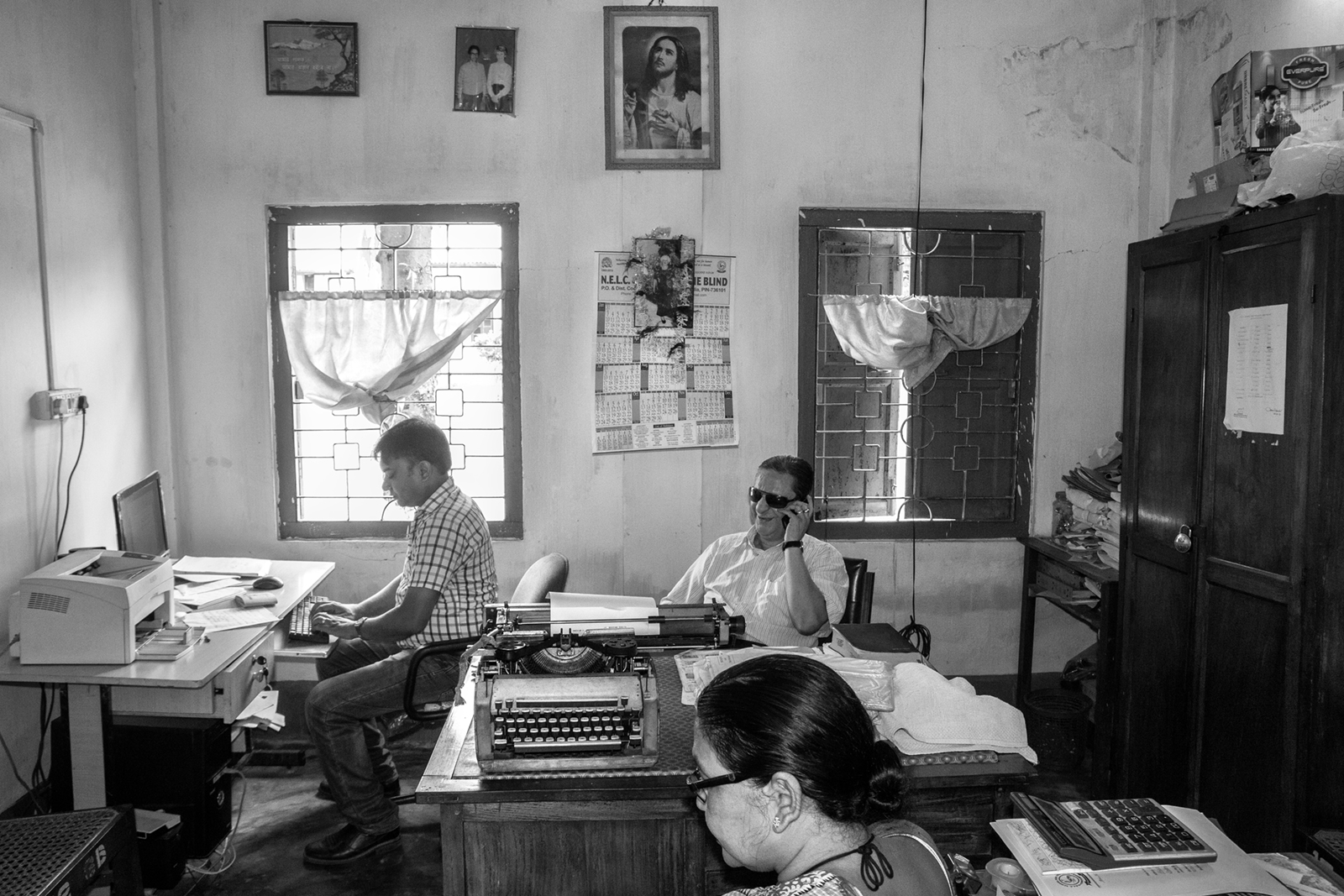 “So how much does it cost to type a page?” I asked. “The price depends on the nature of the document. For example, a simple affidavit costs 10 Rupees per page.” “And how much do you earn a day?” I enquired hesitantly. I found on a good day, they earn around 100 – 150 Rupees and other days even less. 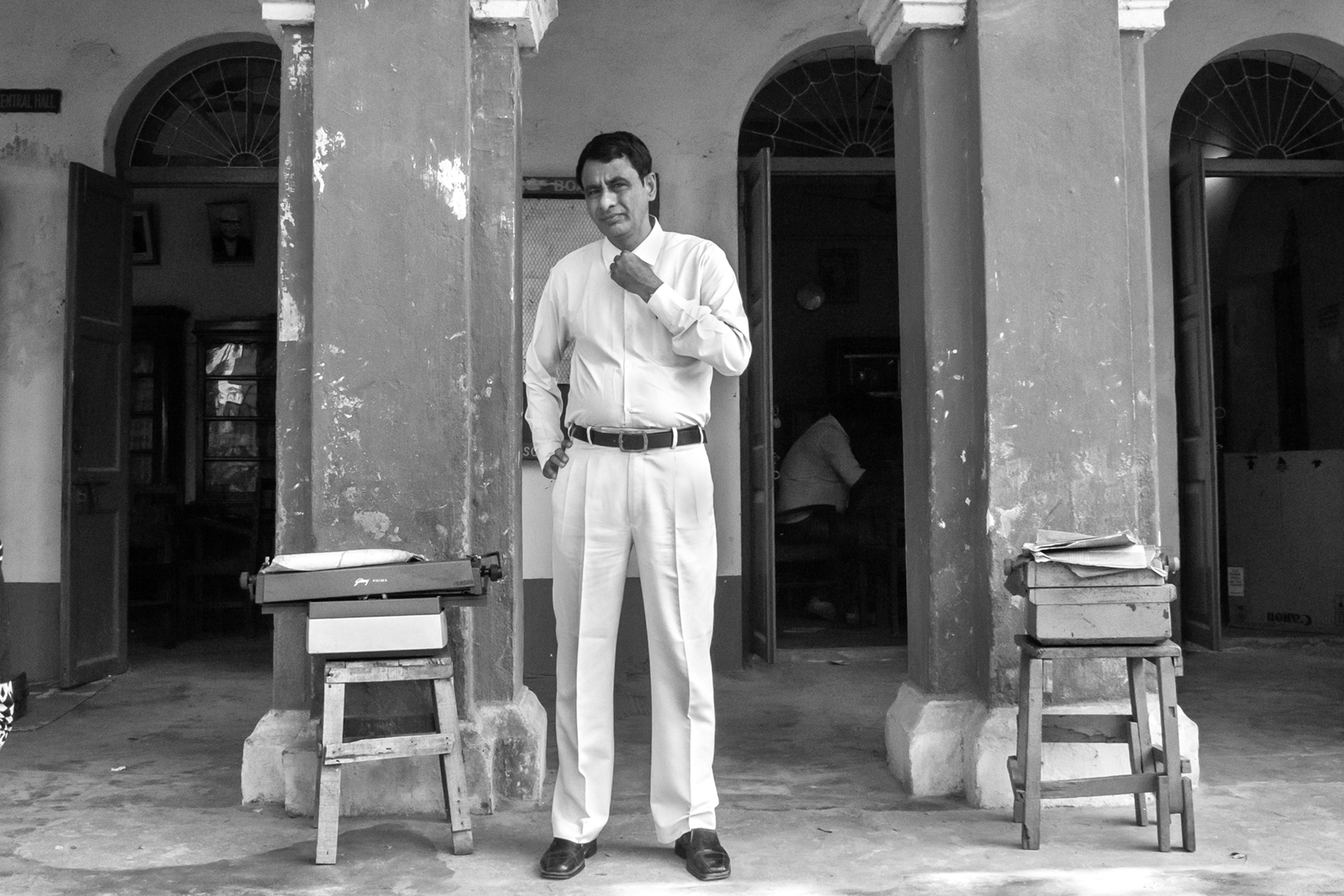 The typists expressed their concern that although the typewriters could survive for a long time to come, but the younger generation is not interested and there won’t be any typists available to run these machines in future.