Times Square at the Millinium

Dark is the Light 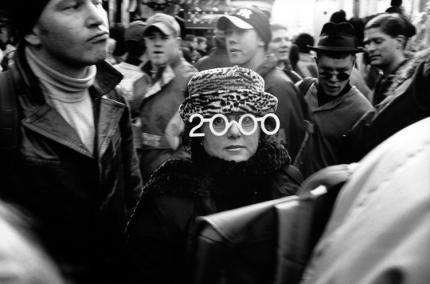 Helen and I met in January, 1999 in Guatemala. We traveled together for six weeks through Honduras, Nicaragua and parts of Costa Rica. By May, 1999, we were living together in San Francisco. Neither of us held a regular job and life was full of fun and adventure. When we realized we would still be together over New Year’s, there was no question. We were bound for New York.

I grew up in Manhattan. The Manhattanites I know leave Times Square to others (tourists, mostly). The alternate New Year’s celebration in New York is in Central Park and includes a 4 mile midnight run and a few subdued fireworks. For New Yorkers, this is akin to walking the park the night before Thanksgiving to watch the floats being inflated.

Roll back the clock and try to remember the year 1999. This was after the first attack on the World Trade Center and the Oklahoma City Bombing – terror attacks from both outside and within. Times Square the night of the millennium was an obvious target and nerves ran high. Add to this the threat of Y2K, the much hyped (and in the end entirely false claim) that all the world’s computer systems would fail as the dates changed to 2000, a number pundits claimed the then current software code was incapable of recognizing. Within this atmosphere, more than a million people streamed into Times Square for New Year’s Eve.

Helen and I stayed with friends on the Upper West Side. Our friends planned a New Year’s Party and in an effort to stay out of the way, Helen and I spent the day wandering around the island from Washington Heights where I grew up to, as you can see above, Times Square.

That night, we would enjoy a champagne tasting at our friend’s apartment and then walk the few blocks to Central Park to ring in the New Year. Helen and I were newly in love, we were in Manhattan and celebrating New Year’s Eve for the first time together at the dawn of a new millennium. Life was amazing.

Amidst that backdrop, Helen and I headed to Times Square in the late afternoon – in part to experience the madness and in part to capture a few images. The crowds were already well established. There were no metal detectors and even back then, I looked at everyone with backpack with concern and suspicion.

The police put people in pens – each pen was roped off with a combination of wood and rope barriers. And we were told in no uncertain terms that a) we had to select a pen from which to watch the ball drop (the streets would be cleared of people wandering aimlessly an hour after we arrived) and b) once in a pen, there would be no leaving until after the ball dropped – so hit the porto-potties now.

For Helen and I there was no question. It was fun to be amidst the scene while we were there. But we had zero interest in standing in a crowded pen for hours on end, freezing, waiting to countdown to watch the ball drop. That was best left to others.

Still, we were there – in the thick of things. And I had my camera ready to go. This is very early in my career as a photographer. I shot with an inexpensive Pentax zx-50 back then, with the cheapest imaginable lens. I’ve taken some of my most iconic images with that camera – which stands as proof that it’s not the equipment one has, but what one does with it that matters.

In this case, I had my camera up at my chest ready to go as we pushed through the crowd. And here came this woman with the quintessential Y2K glasses. I lifted my camera and she stared right into my lens. That, for me, is perfection. I love direct human contact with the camera. Just to her left is a man sticking out his bottom jaw in a way that reminds me entirely of home. And then, just above the woman’s shoulder to the right, there’s a man looking over his glasses and right at the lens as well. The shot itself is claustrophobic, there’s no where for the eye to escape, no place to relax- perfect for the moment. Everything about the image says New York to me and, I suppose, that combined with the Y2K glasses makes the shot a gem for me.

To capture an image like this one one needs to first be willing to throw oneself into situations like Times Square on New Year’s Eve – and then, just as importantly, one needs to be willing to hold up a camera with a 50MM lens and point it, at close quarters, directly at a stranger. This doesn’t come naturally to most of us, but once we learn to do this, the results can be extremely rewarding.

Sixteen years have passed since I took this photograph. But the memory of Helen’s and my time in Times Square is vivid and can easily recall the moments surrounding the instant that I clicked the shutter and captured this image.

Here’s to the magic that brings people together to celebrate seminal events such as New Year’s. Here’s to New York and all that the city represents. Here’s to 16 years of love and life with Helen. And here’s to 2015.