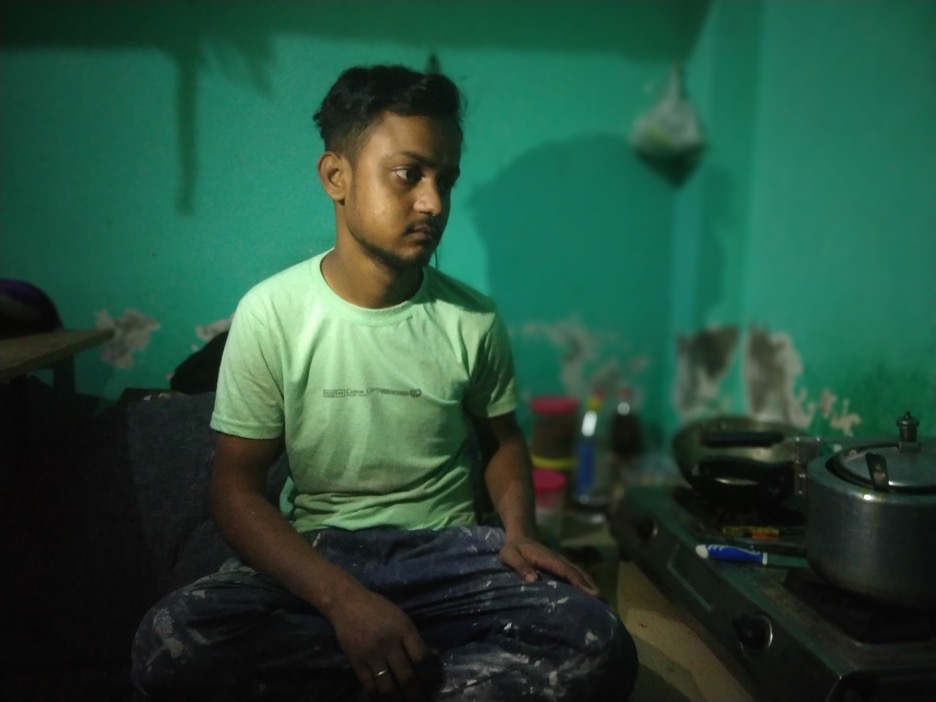 Arbaz (18) and Shahbaz (21) work in a car garage in Tilak Nagar Delhi. They both come from the same village in Bihar, the village that happens to be my hometown too. Since we are from the same area and around the same age, it wasn’t hard to get their contact information.

In Bihar, there are not many opportunities to get an education, which is why, like Arbaz and Shahbaz, I too am now in Delhi, but for a very different reason. I came to pursue an education after being accepted to a government funded university in New Delhi. Arbaz and Shahbaz were not so fortunate.

The idea for this project came from my childhood memories. I remember people moving from one town to another to search out work. One common job they were able to get was to work in a car garage. Now, I found that my own peers were doing the same. I decided to see what their life was like in the city.

Arbaz completed high school in Bihar. He said, “My father fell ill two years back when I was in 12th grade and somehow I managed to take my board exams. After that though, I had to leave the village as every young man in my village must.”

Shahbaz did Hifz in Madrasa. Madrasa is the cheapest Islamic school where students receive a religious education. Most people who attend Madrasa are from a poor background. Hifz means memorizing the entire Holy Book, the Quran. Muslims believe that whoever memorizes the Quran and acts on it will be rewarded and greatly honored by Allah.

Shahbaz said, “After Hifz, I realized there are not many employment opportunities in the field of Madrasa. So I decided to leave my studies and I came here to learn skills, to earn money to support my family. But I never expected the struggle of daily life would be like this. There are so many problems here: water, food, an aching body, and so on.” Shahbaz continued, “Now my Madrasa days, which were a little tough, seem like the most beautiful part of my life. It seems like someone snatched that life away from me.” Arbaz repeated similar sentiments.

Another worker, Ashfaque, said, “In the local car garage, we don’t get the adequate equipment to protect us from the awful smell of paint. Kiya hai kahe. (What can I say?)”

Arbaz laughed as he combed his hair and lamented, “I used to have good hair, but now every day dust and paint in the garage are taking their toll on my hair.” He continued, “I don’t want to stay here for another minute, but when I think about the situation at home I try not to think like that. Anyway, now what can I do? Sometimes, when I see the students going to college here, it makes me cry.”

There’s one thing all car garages in Delhi have in common: most laborers are under 20 years old. Azeem Ahmed and Kashif also share Shahbaz and Arbaz’s story. They quit their studies in their 20s and came here to work to support their family.

It was difficult to see the difficult life these young men lead so closely, but I have been a witness to this situation all my life. In many ways I can relate to Shahbaz, Arbaz, Azeem, and Kashif, so despite the emotional challenges, it was a story I wanted to tell.

Honestly, I don’t feel very hopeful that the problem of migrant workers in India will change. Most of these workers come from my home state of Bihar, where I have personally seen the lack of education and work opportunities. However, I still feel impelled to raise awareness about this issue. I will continue to do more projects of this nature, like this one about migrant workers working in an embroidery factory.