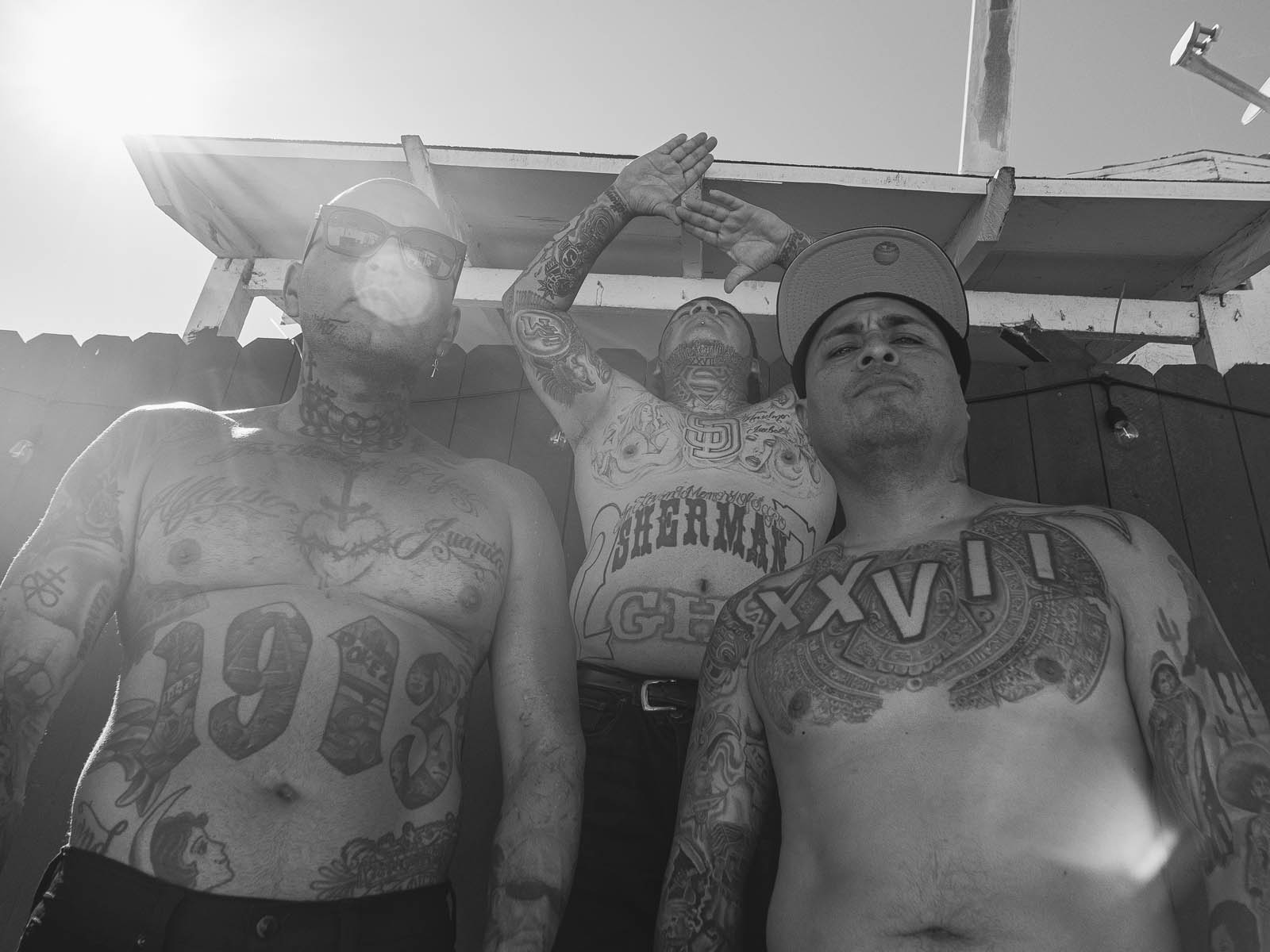 I have always tried to do good for myself and accomplish the things that I want in my life. I was born and raised in the neighborhoods within the South Bay. I grew up in lower class communities and with friends that would later become dope addicts, dealers, gangsters, all that type of the stuff. It is those experiences that surrounded me that now help me make the types of shots I take with understanding.

I say those things because I left all that behind to attend school, among other career opportunities. So when I got a photography assignment, that way of coming up, these past experiences in my life, they brought me back to the hood, for some reason this time to shoot pictures. I just went outside to mess around but I didn’t take it serious at the time. At least, not yet.

Eventually, I chose this particular subject of photography because I wanted to represent San Diego the right way. For the culture, for the hood, for our true identity, and I wanted to do it with respect. I just felt that I could do it right and personally, when I do something and I believe that it will become something, then I’m down to take chances, big chances, and I’ll take my time.

I like shooting raw material that shows life from beneath the shadows where most people don’t step, to photograph things that are out there that people think are not here anymore but are still very present. It energizes me to be able to represent. These are monochromatic pictures of the 619. They’re about the identity of the community. I believe it’s important to know our identity in these communities as minorities and our history, regardless of the past history, because the landscape is changing and it’s becoming political. My photos don’t always match up with what people that are not from here think. I don’t expect them to understand but don’t be confused or surprised if you get robbed or something else out here.

Look, don’t get it screwed up, there is a lot of cultura and positive things out here too. It’s just, I like to put up the side of life that gets ignored, gentrified, and pushed to the side. I’ve never been someone to front or pretend so when I say or show you something specific it’s the real thing. I make it point to go into deep waters.

My concept is “The Other Side of San Diego.” My vision is to show the hood how it really is, from blasted up walls and furniture out in the street to prostitution, gangs, and drugs. And then of course there are specific figures that I shot in a way no one has seen before – in a gritty, grimy kind of way. These are the stories I want to tell.

I want people to know that when I say ‘street’ I represent the ghettos, the neighborhood, the gang banging that exist along the sidewalks of South Bay and South East of San Diego, and Eastside of North County as well. I tell stories with the pictures I take about the barrio, the things that I’ve seen, and the things that represent where I come from.

I try to connect with the most righteous ones and show a lifestyle of reality because they matter. From the stop signs to people strung out on the sidewalks, it’s what I like to do.

I want the community to know and remember that I did this and how I put them up, but I also want to tell their stories as a reflection to what the community is going through. I want to inspire but I also want people to look at my pictures and feel good about where they come from and say, “Damn, that’s home,” or “Damn, I remember that day.” And I want people in general to see life in San Diego from this perspective. There are a lot of ‘out of town people’ and community leaders here in San Diego and it’s not all that it seems. It’s not just beaches, it’s not just “let’s put on flip flops we’re in Cali now.” I’ve heard and seen that so much and it irritates me.

So, I needed to be represented from the street but for that I needed to be trusted. On a personal level, it is my pleasure to photograph and represent a lot of things and people from this area. To have certain figures (some of them are very notorious) appear in my work is an honor. Yes, it took time a long time to earn their trust but I put in a lot of work to get that respect so eventually they started hearing about me, “Chromatic,” and then I’d meet with certain heads for their permission to take photos.

Mentally and even physically, projects like these take a lot from me. I’m constantly moving around, taking shots from awkward angles, putting my own energy into each shot, and then thinking, “You know what? This or that could be better,” and then asking, “Could you do this? Or show that?” Then, there are pictures I have done where it’s in an active location so we got to hurry up because things are happening. It’s always a risk and even when lookouts are in the background strapped anything could happen – it is what it is.

Sometimes I come across people during my shoots they say, “Ooh you’re that guy out there, trip out what! Photographs all the hoods! Ay homie respect! Check this out could you photograph me doing this or that!” I appreciate those moments it is my privilege to represent San Diego in a realistic way, a way I had always felt should be shown. But I don’t like a lot of attention. I like my photography shown but me myself, I like to be in the background, low key.

At this point, I am about eighty percent done with this project – just a few more shoots and it’s a wrap. Once I finish up, I will put it out as a three-volume book with my photos alongside old pictures given to me and stories, as told by many of the figures I have photographed in their own words.

It’s been an experience and I’ve made good friends along the way. In fact, I’ve done quite a few sets of photos that are kind of infamous now. I’d rather not get too much into that but what I will say is that there are quite a few figures and various persons throughout my photos that, while I was there, I felt them. We hung out, we had conversations about a lot of things, they told me how they felt about things that are happening, and how they felt about me photographing everything so real. There was a lot of mutual respect. I was there for all that in the flesh, I remember them and what they were like.

I say all that because they are not around anymore. Some of them are not alive so they live through my pictures. I remember all that. Some of them are going to do life or are locked up in the system with a lengthy sentence, and then there are even a few of them that just can’t be in the public but came out for me real quick. Even though this project has taken a lot out of me, it’s been worth it because I’ll always remember all that.