This project is an extension of my interest in Street Photography. It came about one day more than two years ago when I was doing my usual walk about in the city of Washington, D.C. I had always been aware of the homeless on the streets and would regularly help them out in someway, but I never photographed them either as a primary subject or in the background of another image. On this particular day, I happened to notice Evelyn, the woman whose photograph can be seen below.

In addition to how profoundly depressed she looked, I was struck by how people would go out of their way to avoid walking near her. After talking with her for a while I asked what it was like on the streets during such a busy time of the morning. She said, “It’s like being a ghost, I’m invisible.” With her permission and a small donation I made the photograph that you see here. I did not publish it and it just remained on my storage drive. What did change was my awareness of how everyday people going about their business would completely and totally not see these men and women as they passed them by. That gave rise to the name of this ongoing project known as “The Invisible Ones of Washington, D.C.”

Sadly, due to the nature of the problem of homelessness in my city, there is no end in sight to this project. Many people ask why I do this or why I make such depressing photographs. I do it simply to raise awareness about the scope of the problem in one of the most wealthy and powerful cities in the country and to put a human face and story on people who otherwise have no voice. The second question is one that I find more amusing. I don’t see my photographs of the homeless as depressing. I see them as a real time moment of life on the street that I am privileged to be a part of. There are many stunningly beautiful images of Washington, D.C. and many talented photographers who take them. I am not one of them.

Other photographers, who are also interested in street photography, will often ask how I capture such intensity at such close range. First of all these photos are not candid, they are made with permission and some form of compensation. They are posed only to the extent that I ask the person to hold still for a moment. All images are shown to the subject for their approval. No one has ever disapproved. As for proximity, I always quote Robert Capa, the famous wartime photojournalist who said, “If your photographs aren’t good enough, you’re not close enough.” Truer words have never been spoken.

If you are going to do street portraits it doesn’t matter so much that you are stealthy and inconspicuous because you are asking to take someone’s photograph. So in terms of gear whatever your favorite portrait lens happens to be will work just fine. For me if I’m doing conventional street photos and happen across a compelling homeless person who is agreeable to being photographed, I’ll shoot with a Fuji XE2. Depending on my mood that day I may have a 35mm, a 27mm or a 56mm lens. These are all fast prime lenses that produce excellent results. For me post processing is done in Lightroom CC using the Silver Effex Pro plug in. All of my images are monochrome as I think that best captures the dramatic and evocative look I’m going for. 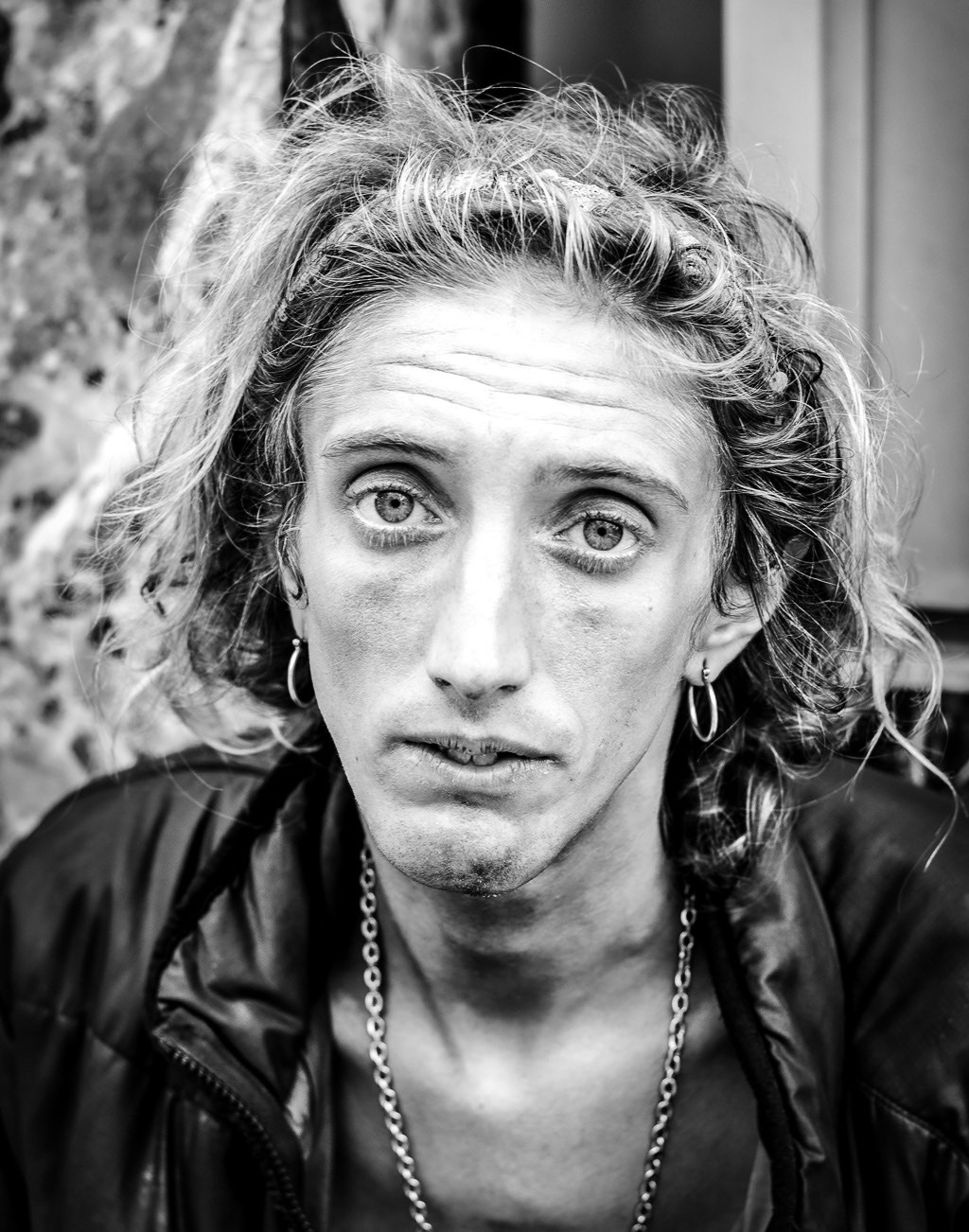 Evelyn is a homeless woman living on the streets of Washington, D.C. for the past five years. Prior to that she lived in a boarding house but had to leave when she lost her job as a retail clerk. As if that is not difficult enough, Evelyn is also profoundly depressed. When I first spotted her she was panhandling but sitting well off of the sidewalk in the shadows. So even though the street was quite busy she had virtually no chance of attracting the attention of passersby. Evelyn says that she had seen a doctor for depression a few years ago and was taking medication but it didn’t help so she gave up on that. She has no idea what she’ll be doing in the near future and cannot foresee much beyond the immediate problem of finding food and shelter. Life is very hard for someone like Evelyn and being invisible makes it harder. 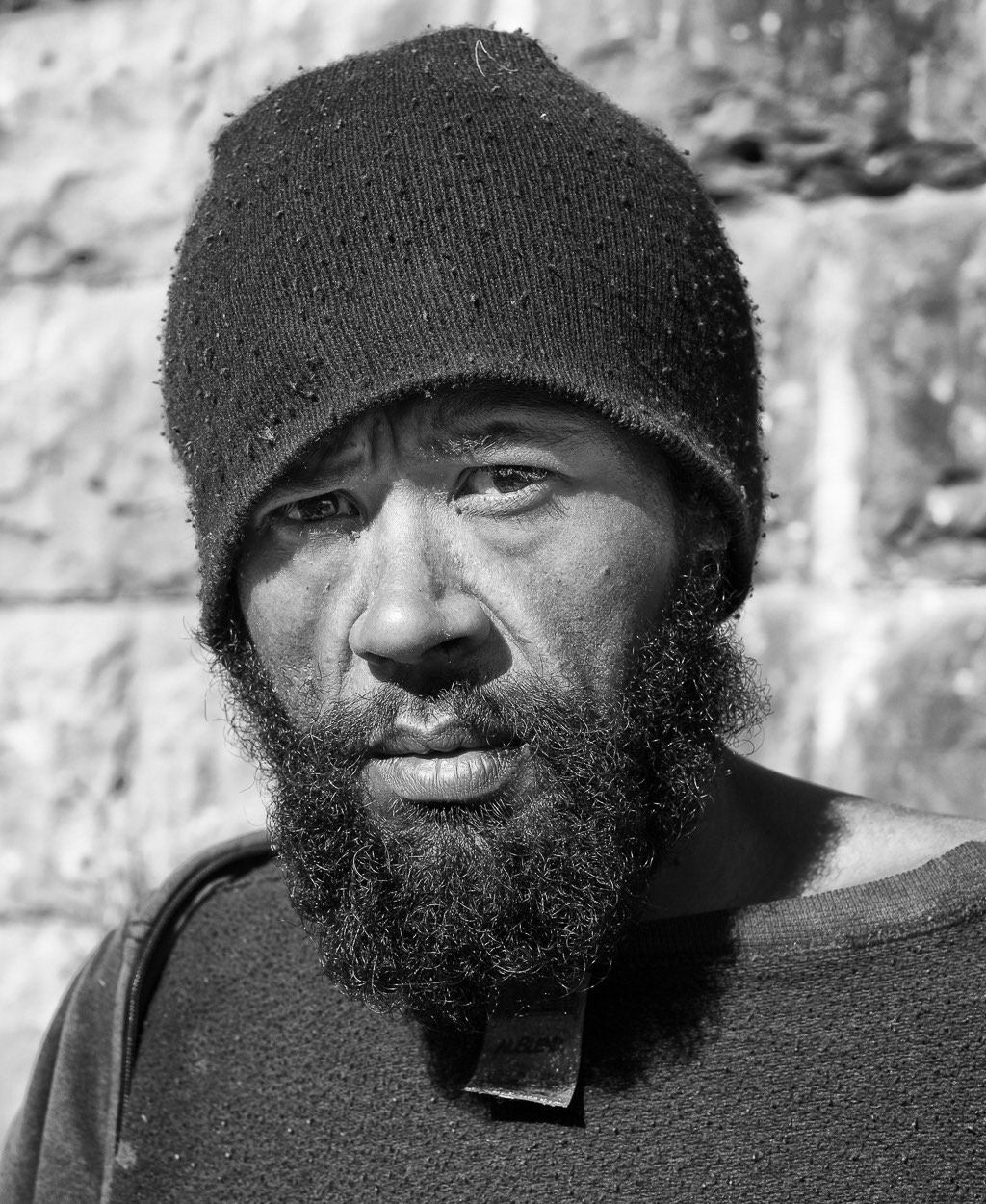 I saw Rennie just wandering the sidewalk near 2nd and K Streets, NE Washington, D.C. That part of K Street is an underpass with the railroad tracks running above providing a shelter of sorts for the homeless who sleep on the street. When I spotted Rennie he was gesturing at cars that were passing by for no apparent reason as he was not panhandling. Rennie is a 38 soon to be 39 year old old man who tells me he has been living on the street for almost two years. He also says that he too had an interest in photography back in high school but that fell by the wayside along with other things. Rennie is familiar with the shelter system in D.C. and at times does sleep indoors. He was cordial and polite and willing to exchange this photograph for a few dollars. This section of 2nd Street is a busy pedestrian thoroughfare crowded with office workers headed to work from near by homes and apartments. It is always sadly fascinating to watch how a homeless person can clear a path on the sidewalk as if they are radioactive. That’s what comes of being invisible. 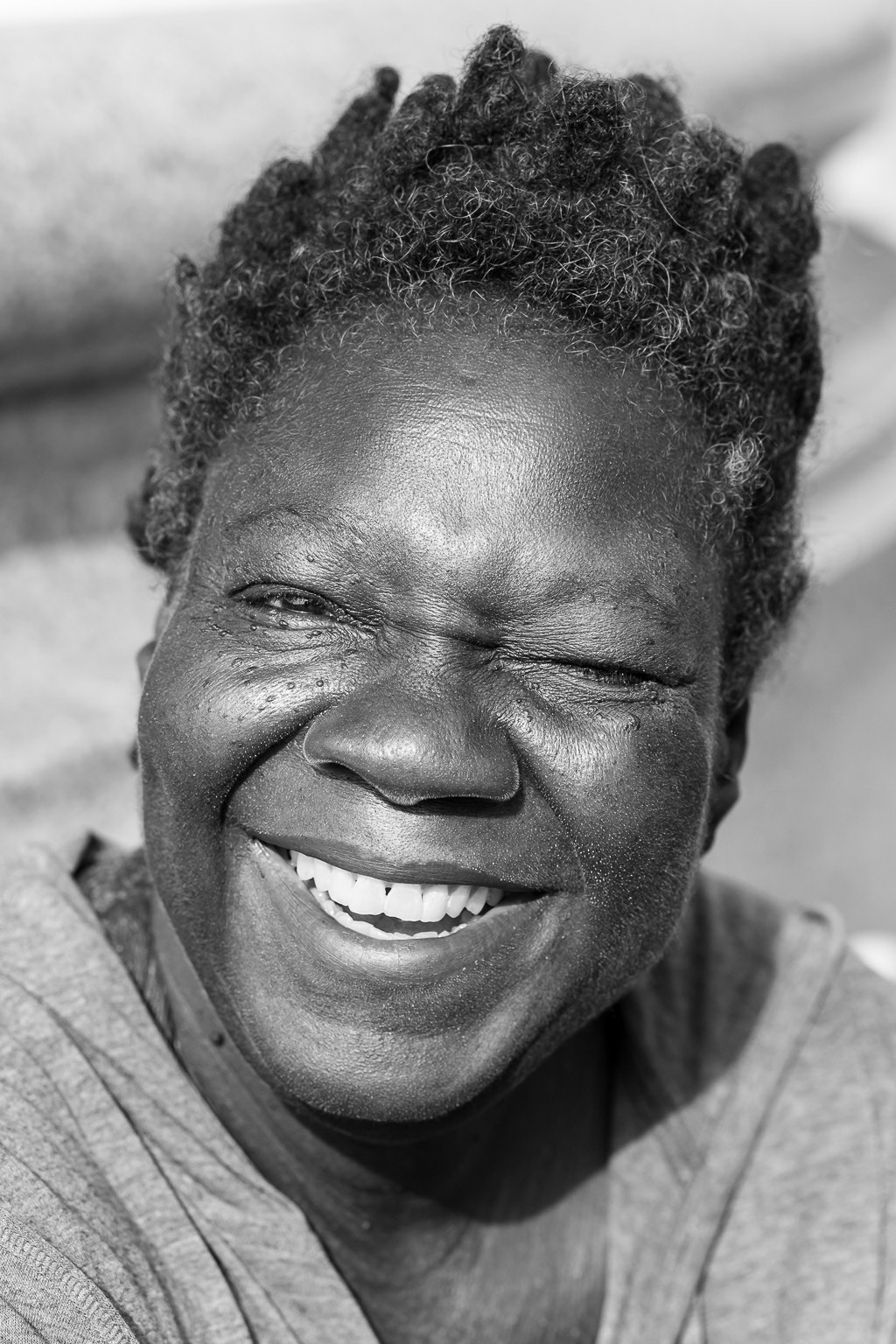 I saw Peggy sitting near one of the non-working fountains on the West side of the street in front of Union Station in Washington, D.C. She was wrapped in a bed sheet and was trying to wash the clothes she had been wearing by pouring bottled water over them. She had apparently scavenged partially full water bottles from the trash. She reeked of urine and other bodily odors. Peggy was not panhandling. I think she is far too mentally ill for that. She was conversant with me as long as I was willing to believe that she was not homeless and was on her way to the Hyatt Hotel down the street for breakfast. The rest of Peggy’s story is just a jumble of disconnected thinking. So it’s impossible to determine the veracity of any part of it. Peggy was amenable to a photograph. I gave her a few dollars, a fresh bottle of water and a few granola bars which seemed to me like spitting into a hurricane given her dire situation. To say that Peggy is one of The Invisible Ones doesn’t begin to capture her marginalized existence.

I saw Rosie panhandling just inside the entrance to the Farragut North metro station on a busy Friday morning. She was sitting on the concrete floor holding out a torn and dirty cap in the direction of the rush of morning commuters coming and going at this stop. When I sat down next to her she asked if I was the police. Apparently the MPD has been asking the homeless to move along when they are sitting in certain public spaces. The area around Farragut North is known as the “Golden Triangle” and is currently part of the city’s beautification campaign.

After Rosie was satisfied that I wasn’t with the MPD she was willing to tell me a little about herself. She says she is 83 years old and been homeless for 17 years. She came to D.C. from Kentucky after her husband died hoping to live with his relatives. This did not turn out as expected and she has been living a marginal existence ever since. She will sometimes make enough money panhandling to get a $20/week room in a flop house but mostly she tries to sleep at a women’s shelter or in the park. Rosie is not in good health, she has a lesion of some kind on her nose along with a wheezing cough and arthritis. She is not optimistic about making it through the coming Winter.
Rosie’s presentation is terribly sad and pathetic as she sits there propped against the concrete wall. She is not aggressive or offensive in anyway, yet she is not given a second glance by dozens of morning commuters. She is invisible to them. Rosie was agreeable to allowing me to take her photograph in exchange for a cash contribution. 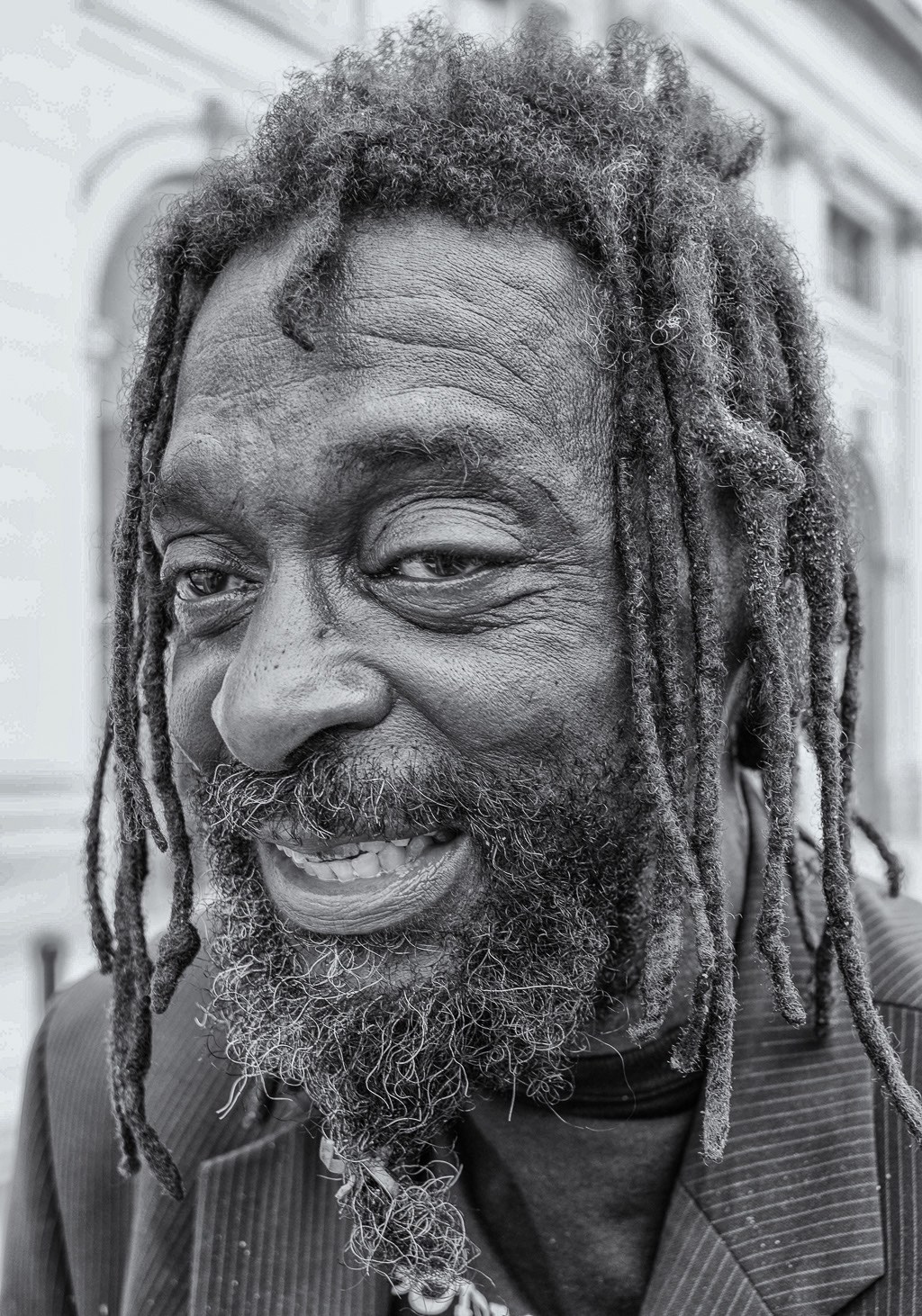 I first saw Gregory this Monday morning dragging a trash bag around the open green spaces adjoining the US Capitol grounds. At first I thought he was just scavenging for glass bottles to redeem the deposits but as I approached him it was clear he was picking up litter and emptying it into larger trash bins. He says he does this because it’s important to keep the grounds clean and it makes him feel useful and productive. He expects nothing in return but if people want to help him out he won’t refuse. Gregory is in his early 60’s as best he can recollect and has been homeless for at least 20 years. He is originally from Washington, D.C. but has no remaining family here. Gregory’s homelessness is connected to his use of crack cocaine years ago. He was given a 15 year mandatory sentence in 1985 for possession of one piece of crack. Not so unusual back in the days of mandatory sentencing. He served all of that time in Federal prisons and was ultimately released to the streets of Los Angeles. He spent a few years on Skid Row in L.A. before making his way back to D.C. by hopping freight trains. He says he’s been clean and sober for several years and seems to be as we spoke this morning. Gregory sleeps outdoors in the warm weather and tries to find church shelters in the Winter as they are safer, drug free and are better supervised. Gregory is a pleasant and friendly man who seems amazingly content to be about his self appointed job of picking up litter around Capitol Hill.

This year has been especially hard on the homeless men and women living on the streets of Washington, D.C. The city government has been struggling to keep up with an ever growing population of people without shelter. Wesley is a homeless man who has been on the streets for about 10 years. He has a spot where he can be seen most every day during the morning commute. He positions himself at Washington Circle just outside the complex of buildings that make up the George Washington University Hospital complex. It is a good spot in that the street traffic is heavy and continuous for several hours in the morning. Wesley is not assertive about his panhandling, instead he sits passively and waits for a benefactor to stop by. When that happens he is conversational, pleasant and surprising upbeat given his stark surroundings. It is always sad to watch the large numbers of well dressed, busy people going into the hospital buildings who never give Wesley a second glance. He may as well be a light post because to most passersby he is invisible.