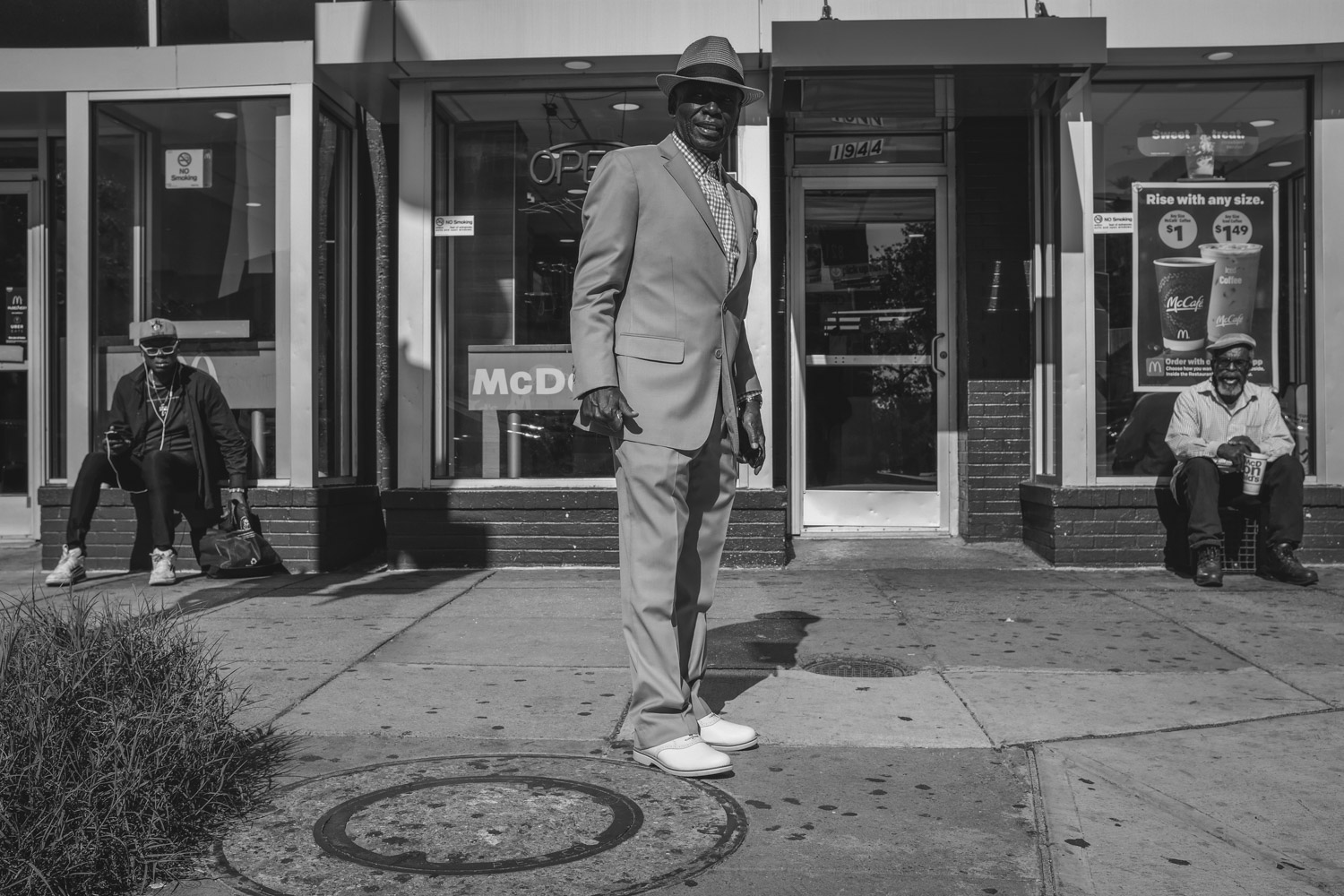 The corner of 14th and U street for me is a metaphor for Washington DC. As many before me have said, the camera has been my visa to linger in neighborhoods where I may otherwise be a stranger, and overcome my discomfort of looming big brother cameras, suspicious onlookers in these times of heightened anxiety and security. I have always been drawn to the corner of 14th and U Street. This area on U Street was a historic epicenter of African-American life during the early to mid 20th century largely due to racist housing policies and apartheid-like social conditions in the country. Also, 14th street was and still is a major artery in the city connecting Washington, D.C. directly to Virginia via the 14th street Bridge. It also used to be known as ‘auto row’ because of the confluence of auto dealerships on this street. For these reasons, the intersection of 14th and U was a logical choice for an anthropological photo series concentrated in this corner. 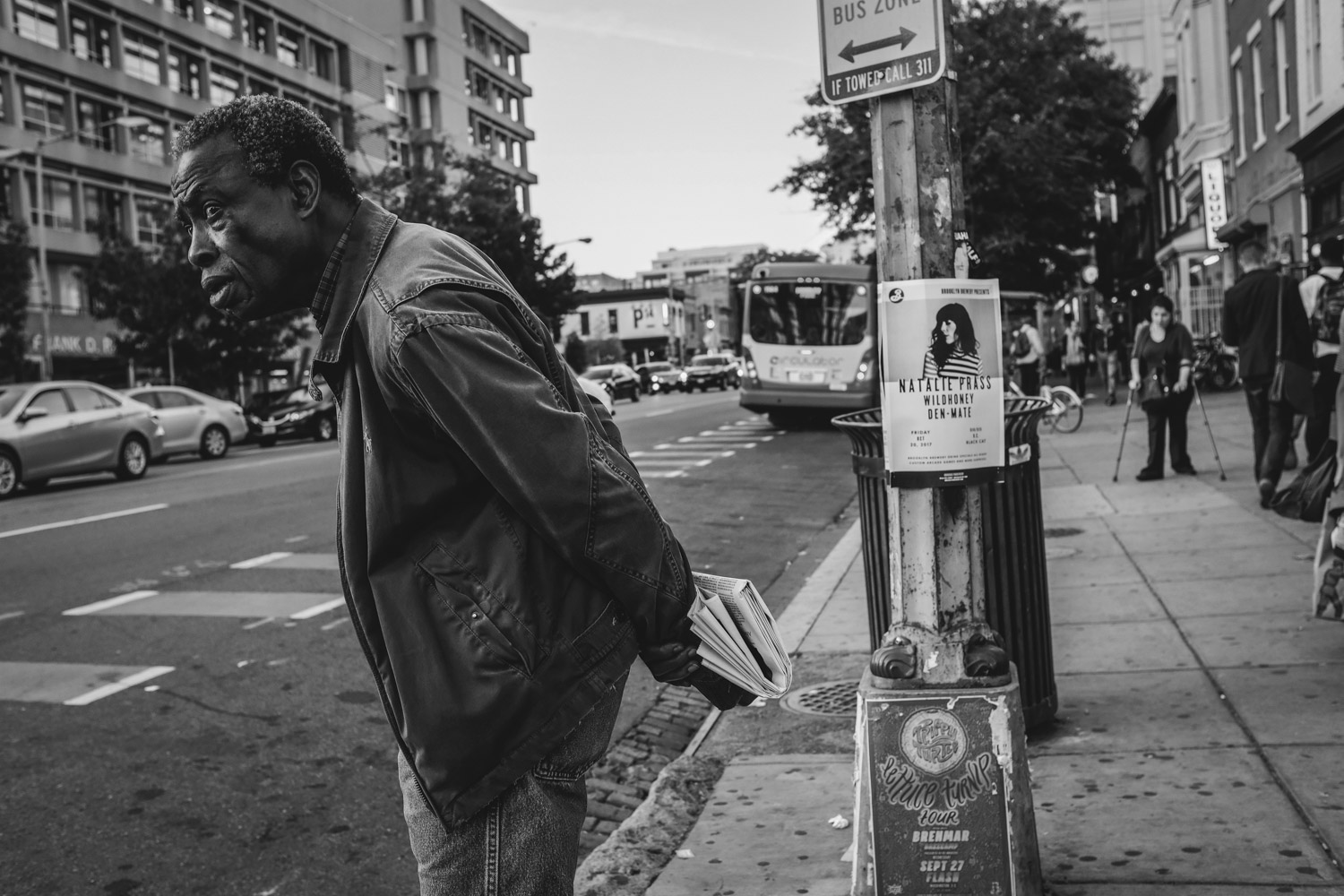 For me, Washington DC has always been an enigma. It retains a village-like quality with the requisite urban aloofness. It is a city of many faces, a city, where I suspect, much happens behind closed doors, much like in Saudi Arabian cities, and less so on the streets. As it is the nation’s capital, it is a city fraught with wary political types, Type A personalities, diplomatic community types, and natives of the city. All who seem to coexist in this city of neighborhoods. 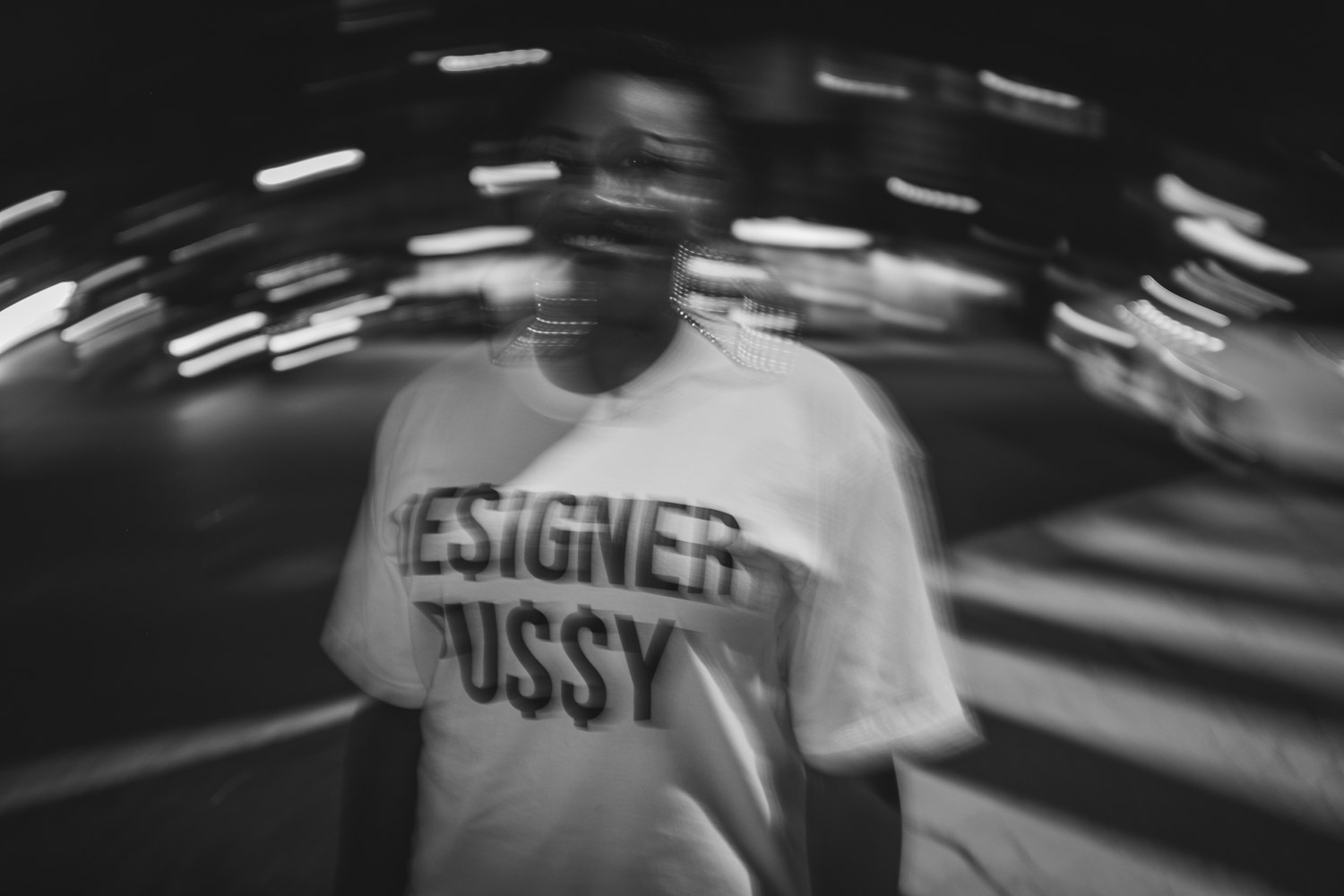 It is not an easy city to ply street photography, but can be intensely rewarding, particularly on days when all the factors of magic come together. The city demands a lot of a photographer, because it has many sights that are over photographed, and requires a lot from a photographer. It requires patience and a sense of adventure, as much happens beneath the surface in Washington DC. 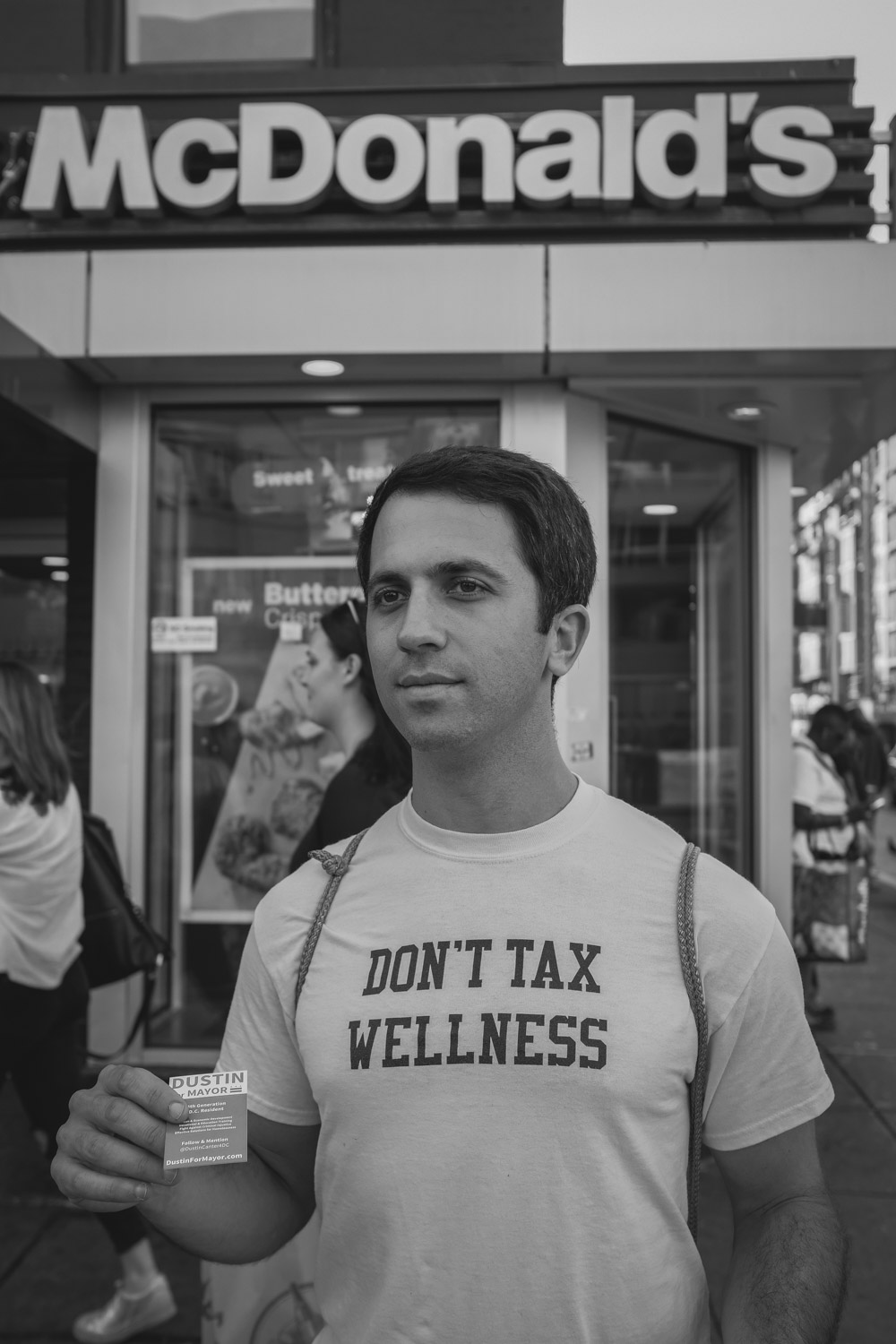 The neighborhoods of Washington DC evoke specific references and feelings in my mind. For example, Georgetown, where I went to graduate school for me represents Sperry topsider wearing, preppy and well-wheeled aristocratic types. Adams Morgan has recently become a haven for many transplants to the city who largely work for the IMF and World Bank. Georgia Avenue is reminiscent of the revolution Gil Scot-Heron sung about, represented by bookstores and coffee shops that smell like a recently burnt nag champa incense. Then there is downtown DC, which is often like a ghost town on weekends, as it only buzzes on weekdays with lawyers who work on K Street, federal workers milling around the many food trucks near Chinatown, and students running from class to class in Foggy Bottom. 14th street remained an enigma for several reasons. The neighborhood had changed so much over the last 10 years, and with it, came new residents, often displacing the previous inhabitants. 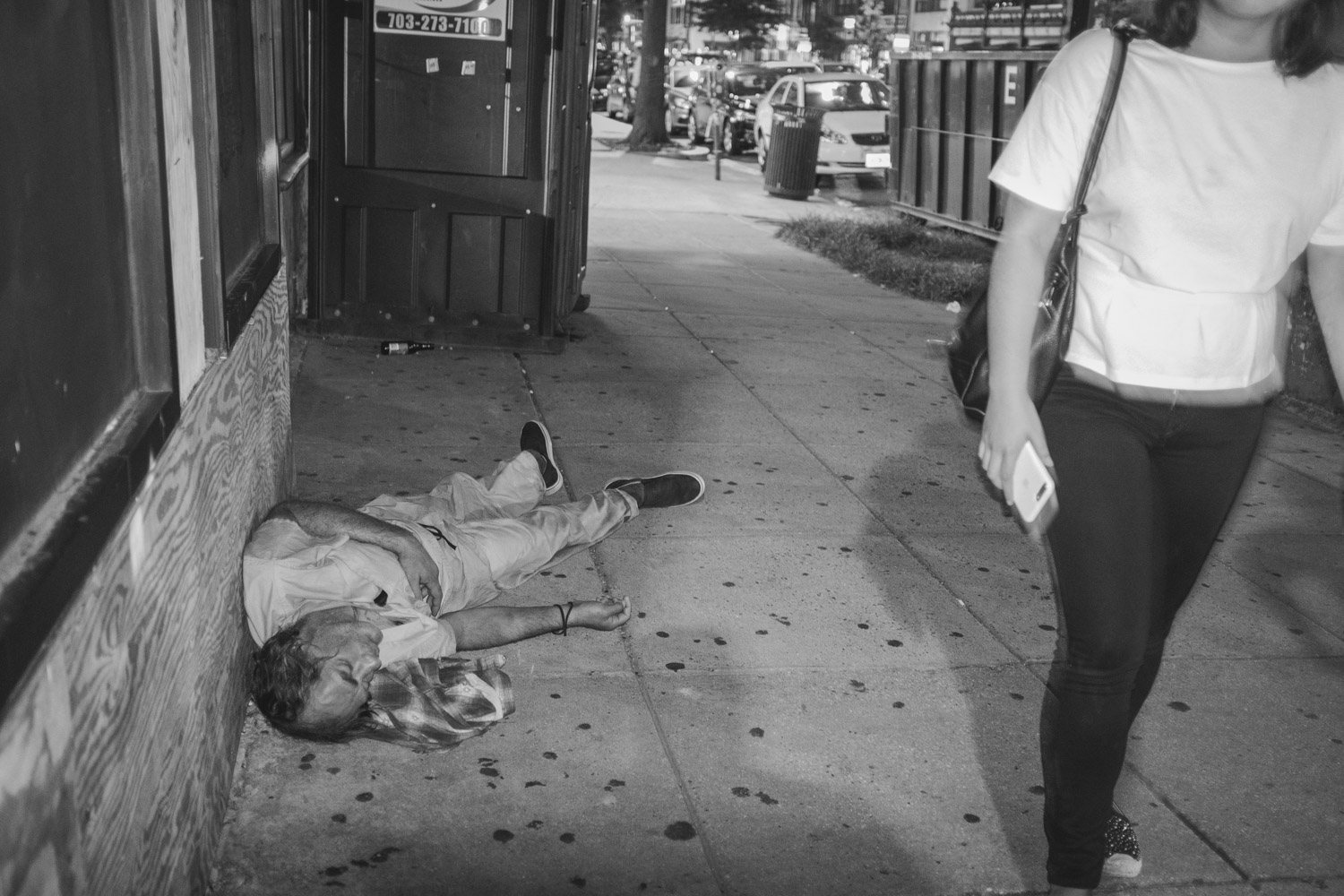 I had previously traversed this corner several times, but never thought to work on a series, focused solely on this part of town. The concept was inspired by a conversation I had with a renowned photographer, who happens to be a friend. From that conversation, I was further inspired to complete this series in the mold of the HBO series by Charles Dutton aptly named ‘The Corner’, and also an eponymous song by Common, and featuring the Last Poets. The street and documentary nature of this series was inspired by the worker of several great photographers I admire, such as Malick Sidibe, James Barnor, Ruddy Roye, Jamel Shabazz, Martin Parr, Sebastiao Salgado and many others. 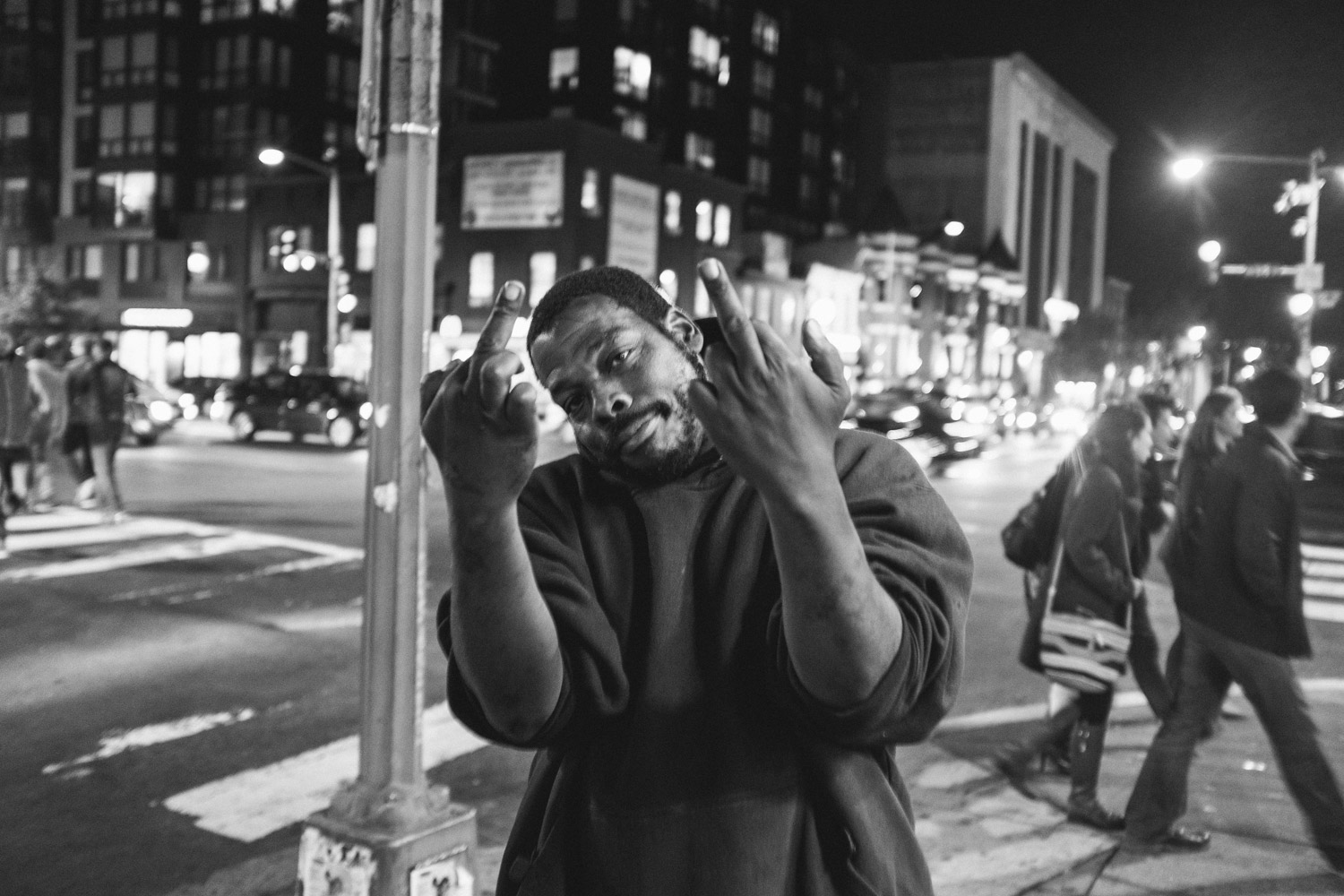 The corner today has a ubiquitous Subway shop which serves as a country club of sorts, for street performers, lost souls, tourists, neighbors and others. The workers at the Subway store are mainly Bangladeshi immigrants, who have gotten used to the presence of several familiar faces, most of them, fixtures on the corner, many of them with insecure housing arrangements. The country club, also known as the Subway store provides a brief resting point for them to rest and decide on what their next move for the day should be. I spent several months observing the comings and goings of the characters in this store. On hot days, I ventured in to by a bottle of water or Gatorade and to say hello to the workers there, so they could get used to my presence outside their store. This was my attempt at creating invisibility so I could mesh into the environment of the corner. 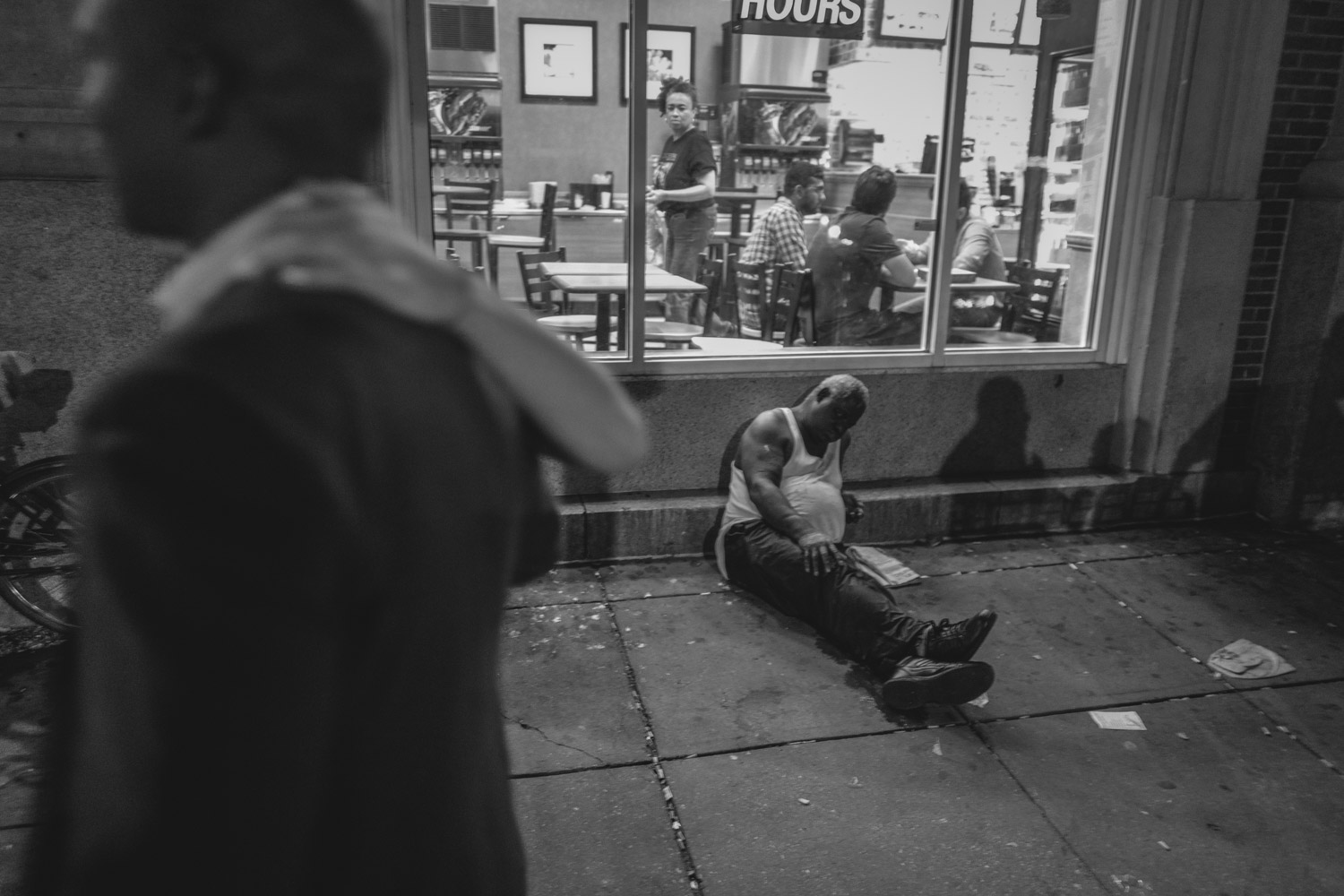 On the other side of the street is a McDonald’s store close to a bus station where you might find panhandlers, gentrified old-timers and lingerers. In between all of these places, are local workers strutting about in purposeful strides to their jobs as concierges, food service workers, bartenders, cleaners and other service jobs. The new neighbors are mainly young professionals who may work in many of the capital city’s non-profits or organizations of the like; young families, singles, in a neighborhood that is now 60% white and 24% black, according to data culled from Statistical Atlas. Although the nation still contends with the effects of intentional racism and the remnants of discrimination, this corner, in my view, is a metaphor for the new social order. It is not just race, but economics that determine access. In some ways, this is linked to a broader discussion about social equity, historical inequities, personal accountability, and access to opportunity, social capital, social welfare and other questions that I cannot address. 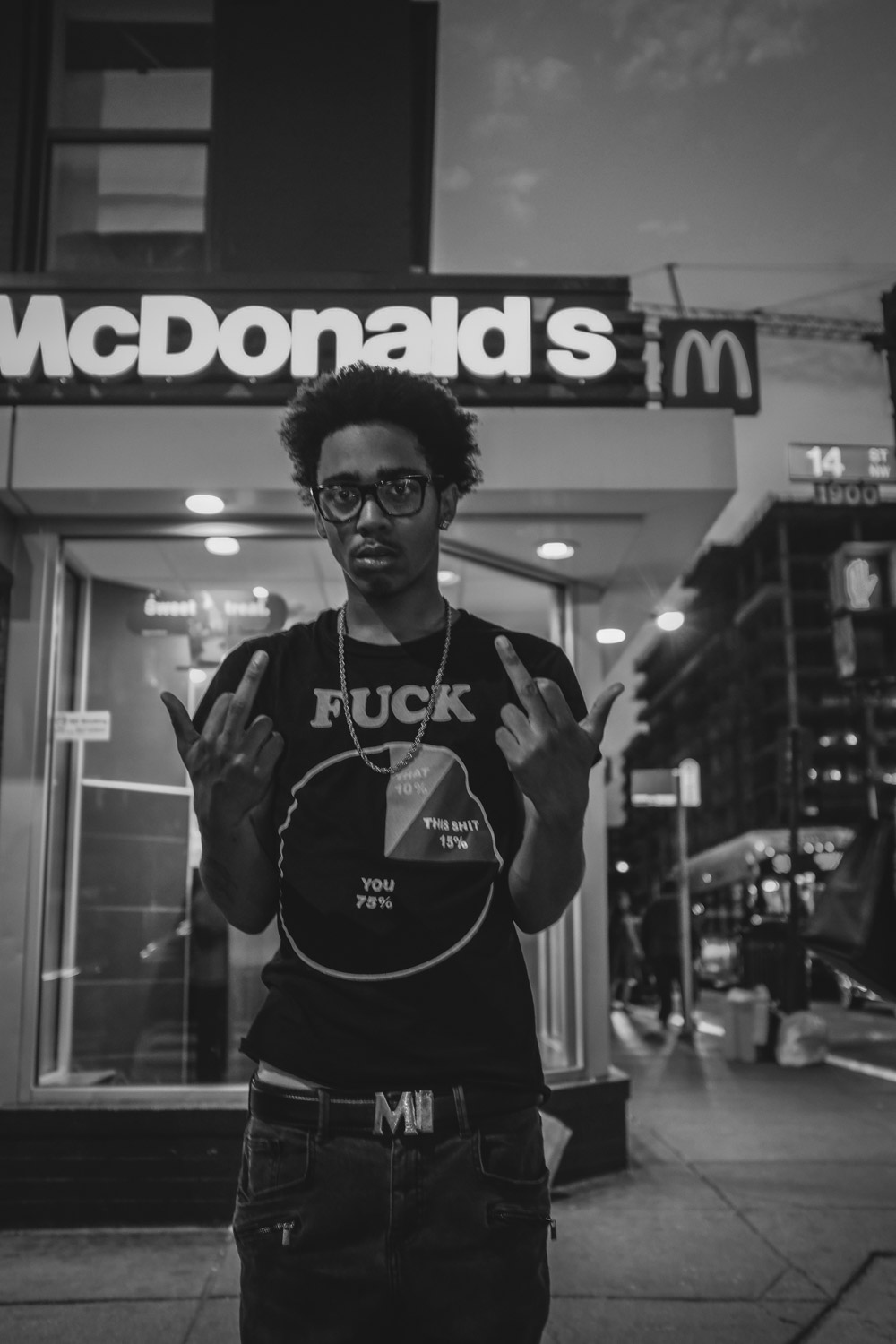 Some of the characters I got to know on the street included Danny the drummer. He seemed to be without a determined address, was always full of energy when I met him, and was a street performer who recently lost his drum kit. Dirty knucklez, another character often showed up on the weekends with his toothless grin, peddling his raps for dollars. He appeared to be Muslim, Caucasian and a native of the city. There was also Rasheed, a wise man of indeterminate age, who always carried books that spanned his love of all things related to eastern spirituality, he always had a kind word for me, Rasheed. The Bangladeshi immigrants at Subway were always striking to me for their sense of camaraderie with each other, something that probably compensated for their being so far away from their home country. 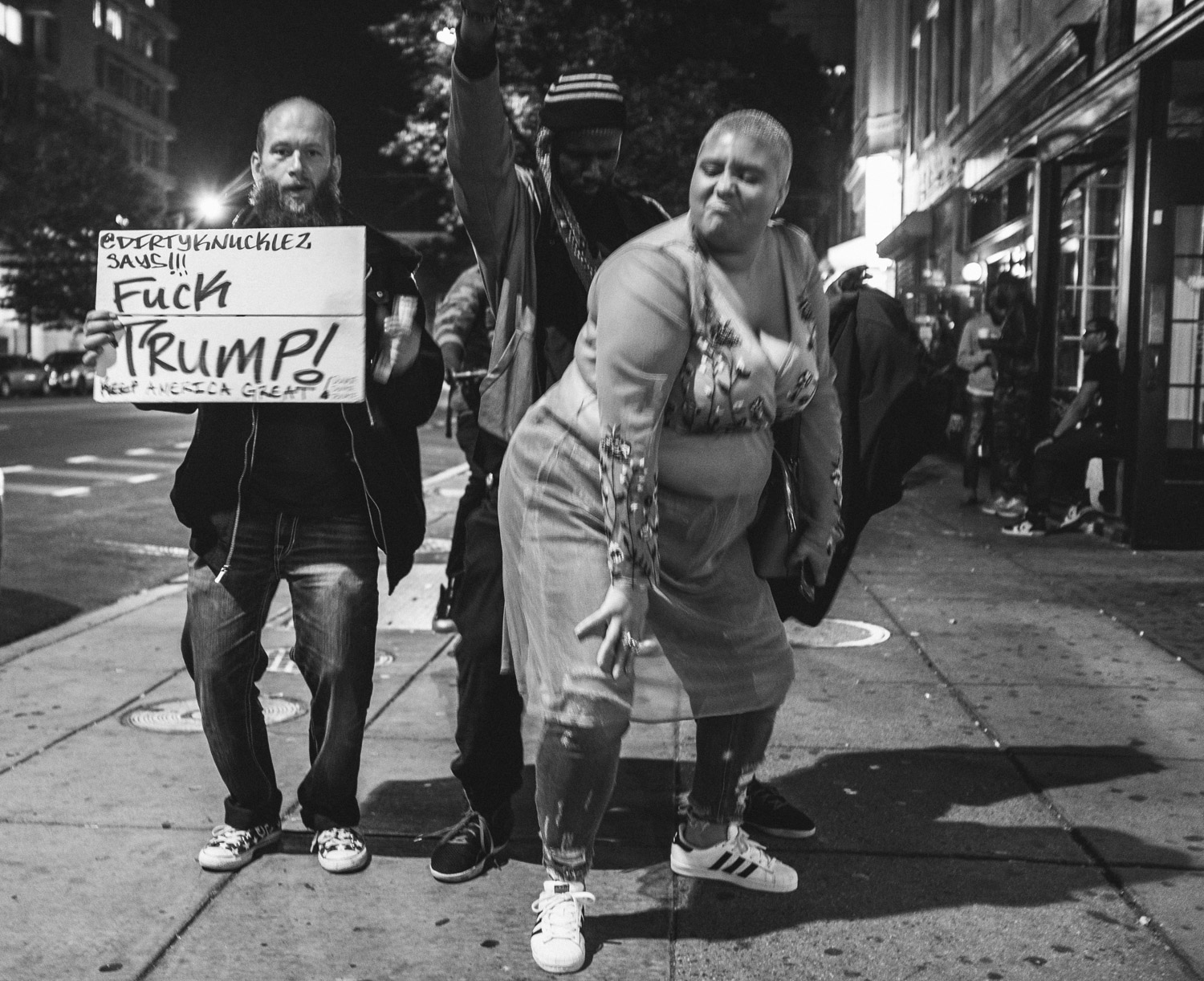 The corner inspired me, angered me, frustrated me, and sometimes alienated me. I know I barely scratched the surface of what the corner has to offer. There were too many nuances, stories and complexities to capture. I hope to return to the corner again, one day soon, to see what has become of it. In the meantime, these pictures illustrate what I saw. 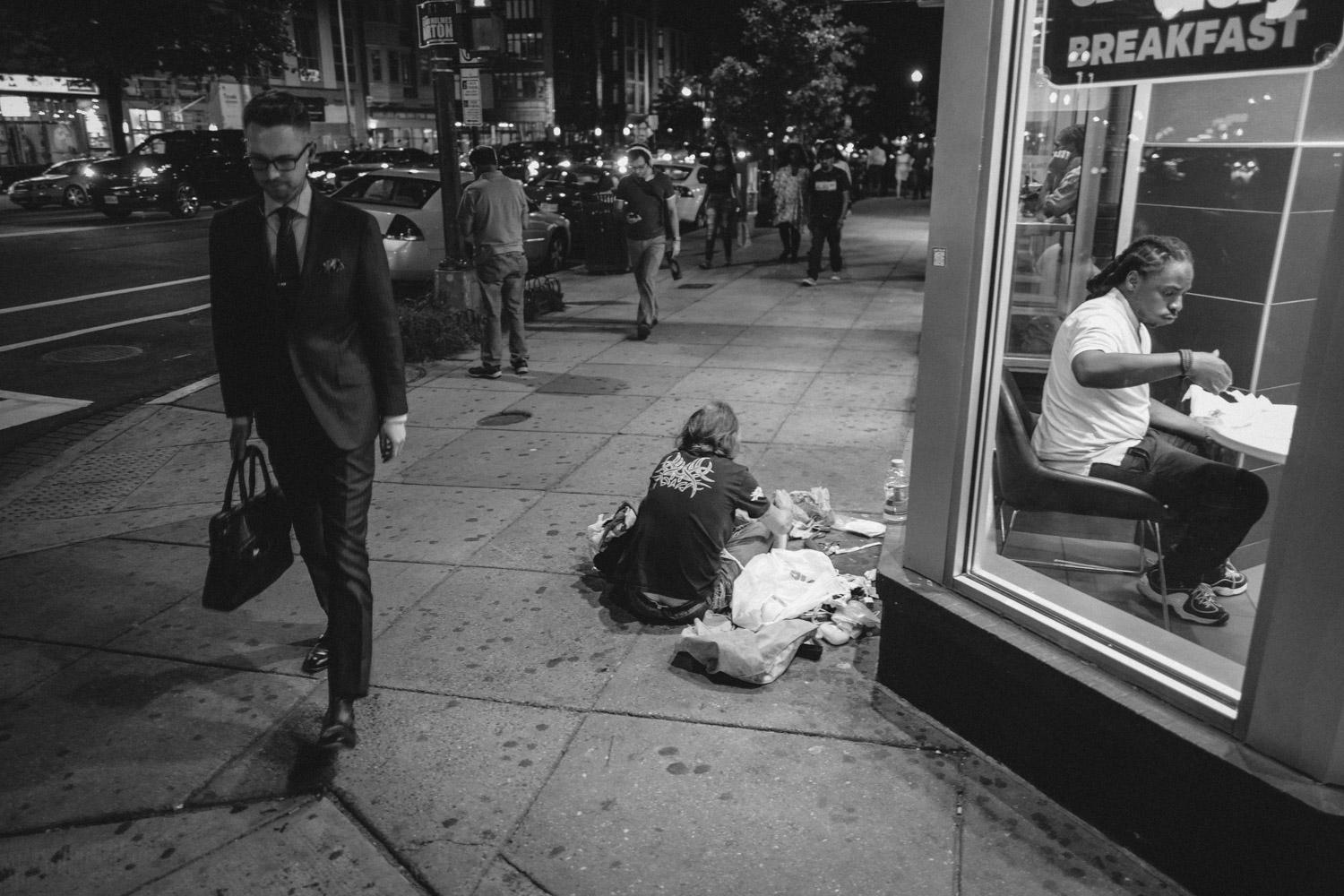