Taking Better Photos with Your iPhone or Smartphone 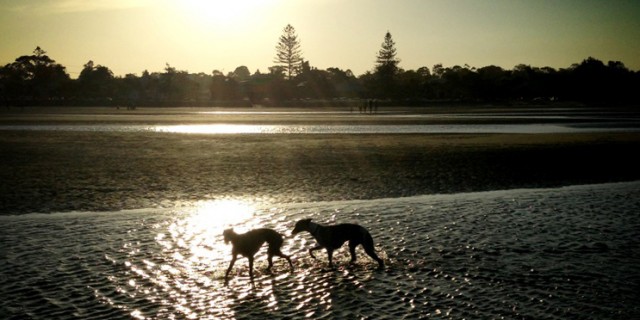 I know plenty of people who have bought themselves thousands of dollars worth of camera gear with the promise that they’ll instantly become an amazing photographer. Unfortunately this is like giving a self-opinionated, zit-faced wet-dreaming teenager the keys to a Lamborghini Aventador and expecting some kind of race driving child-prodigy to miraculously materialise. The absolute truth is: expensive cameras don’t take amazing photos; people take amazing photos. With some tips about lighting and composition, there’s no reason why you can’t practice and develop your photography skills using simply the camera on your very own iPhone.

All of the example photos taken in this article are from the camera in my iPhone 5. In each of the examples there are two unmodified shots at the top to compare, and then a larger version of the better photo with some subtle vignetting filters applied; some through the Twitter App for iPhone and the others adjusted using the Fotor Photo Effect Studio iPhone App (which is free from the App store).

First we’ll look at one of the most overlooked aspects of photography: lighting.

First, let’s look at natural lighting. Sunlight. Below are two photos of the same headland at Mona Vale. The only difference: the position of the sun. In the first image, the sun is sitting somewhere in front of the camera. This causes the headland to fall into shadow, the sky to look a grey blue, and just generally all the elements in the photo look a bit dull and washed out. In the second image (and yes, this is the original unedited images direct from the iPhone camera roll) the sun is behind the camera, illuminating the sand, shrubs and headland nicely while producing nice rich colours. The sky directly opposite where the sun is positioned is always the deepest blue, so in the context of this photo the sky is a nice deep blue and the sea (which is basically a reflection of the sky) also appears rich and inviting. In the main image I’ve just applied a very subtle vignetting (darkening of the edges), a slight bump in contrast and a touch of saturation (colour boost) just to make the image a bit more special. 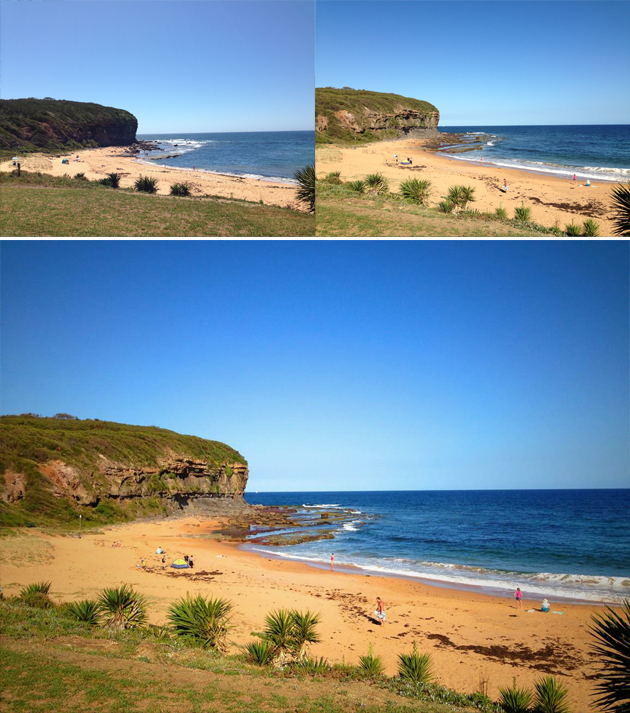 The next example of how lighting can make a dramatic difference to a photo is with these photos I took of the Lions getting their arses handed to them the other weekend. Both photos are taken from the exact same seat, only the second image is almost exactly two hours later. Where the first image is too dark with a bleached, plain looking sky, the second image comes alive with the stadium lighting combined with the magnificent sunset that started to break its way through the cloud cover. The final image below is basically unaltered apart from just a very subtle vignette to help frame the photo. Some would say ‘well that was just good luck that the sunset came out’. And it was. But that’s the whole point: becoming a great photographer is about becoming aware of your surroundings and being ready when moments of interest or beauty present themselves. In this instance, the lighting changed and suddenly appeared amazing to my eyes, so of course I took the shot. It was, after all, more interesting than the disappointing football by that point … 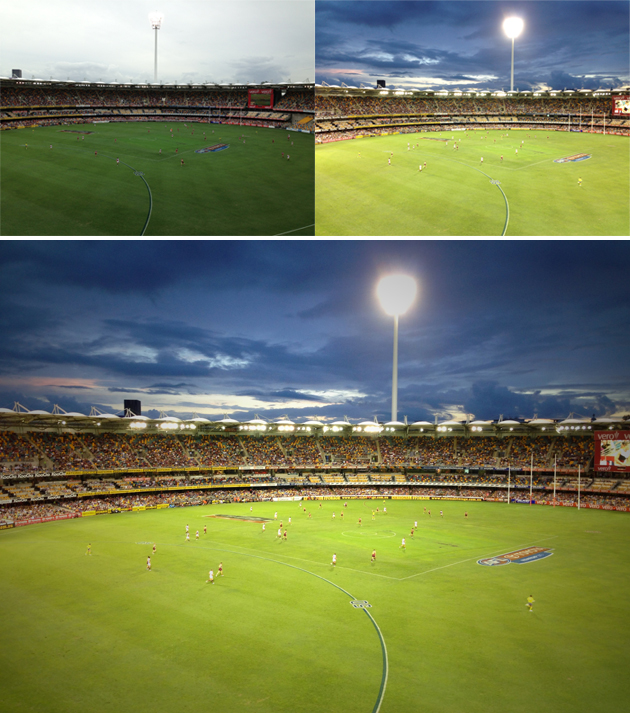 So after considering the lighting and looking for opportunities to photograph nicely lit scenes, let’s move on to subject matter and composition.

We took a trip down to Sydney after Christmas. After eating ourselves stupid and having a wander around the city, we happened upon this docked vessel at Circular Quay. Now the first shot isn’t very good. Yes it’s got the ship in it, and the ship’s name, but it’s not very interesting. The gate in the foreground is ugly, plus the white pole with the banner on it is a major distraction and effectively splits the image in two. It just feels cramped and busy. There’s no background to give the image depth, and you really can’t see that the ship is sitting in the harbour. In the second image—which by-the-way was taken only half a dozen steps to the right of the first image—has much better balance and is more interesting. For a start, the bow (pointy bit of the boat) is iconic and aesthetically quite pleasing. There is also much more water in the shot which both adds interest and texture to the photo, but also helps to enhance the subject matter of the image—which is after all is a photo of an ocean liner. Finally the weathered docking ropes running from just out of shot up to the front of the liner creates perspective and depth in the image, making a nice mix between foreground ropes, ocean liner middle and the Opera House peeking out in the background. The final image again just has the standard Twitter for iPhone vignette filter placed on it to increase the photo’s dynamics. 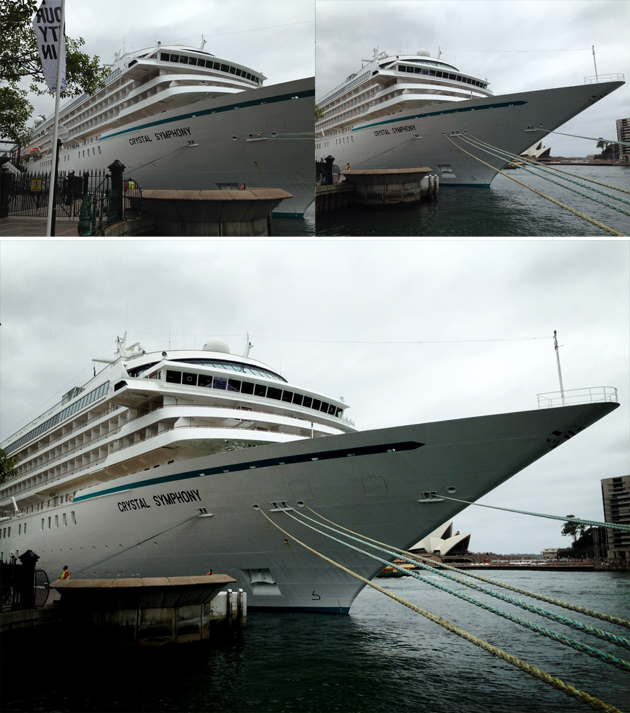 So now we’ve looked at these two aspects of photography, let’s put them together.

In this next example, the first image of coffee in a cup is pretty boring. The lighting is average, the composition isn’t very interesting, and there just isn’t much happening in this image at all that would excite or inspire someone. In the second image, the coffee is glowing in the light of the roastery it was photographed in. The coffee has an interesting collection of bubbles and reflections on the surface. The cup has perspective on it due to the close proximity of the camera. And in the background a nice timber bench and a collection of unroasted coffee beans creates texture, colour and even a bit of a story about where the coffee in the cup has come from.

It’s all the elements working together to make a nice photograph. The lighting creates good colour while casting dramatic shadows that produce contrast and tonal balance. The cup is positioned on an unusual angle with the handle turned slightly to the front. In the final image a vignette filter produces an almost theatrical spot light effect on the whole scene. 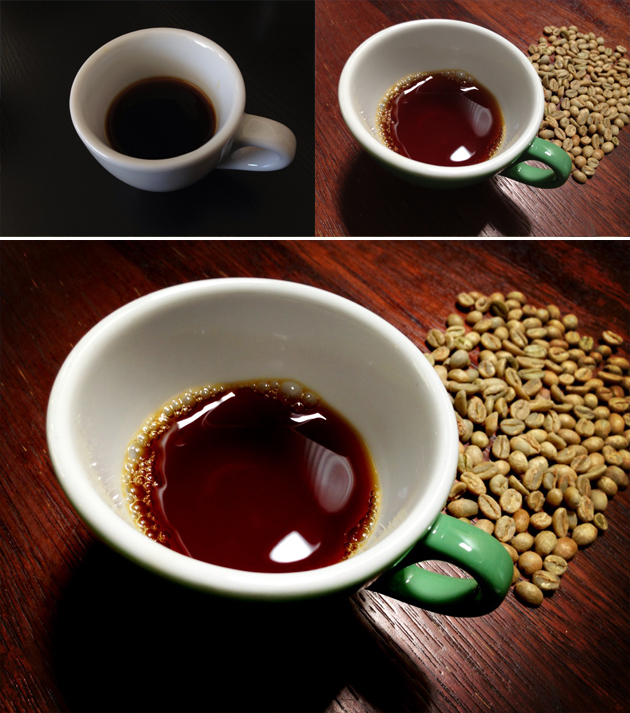 And the final images in the article are of our two fur-babies: the Whippets. Running like a bitch out of hell, both images feature Calya pelting through the water with Captain hanging back on the other side. The first image isn’t bad, it’s just not inspiring. The camera is square on with the horizon, and both dogs are lit from behind making them dark and a bit flat. Captain in particular looks like he’s about to be beamed up into a UFO or something. Contrast this with the second image that has the camera tilted on an extreme angle, which helps to enhance the speed of the Whippet and also create some cool shapes with the sky, sand and water. The triangular snippet of sky sits just above Captain who gets featured in his own little corner of the photograph. The foreground has miss Cayla doing what Cayla does best: running at break-neck speed through the water. Both dogs, the ripples in the sand, and the splashes from the bitch are all lit from the side via the afternoon sun. This creates nice contrast and helps the objects and surfaces in the image to look more 3D, more real and more simulating to the eye.

Once again the final image has a very subtle vignette applied just to add that little extra variation in tone through the sand and water, and to help our little bitch be centre stage in this photo. 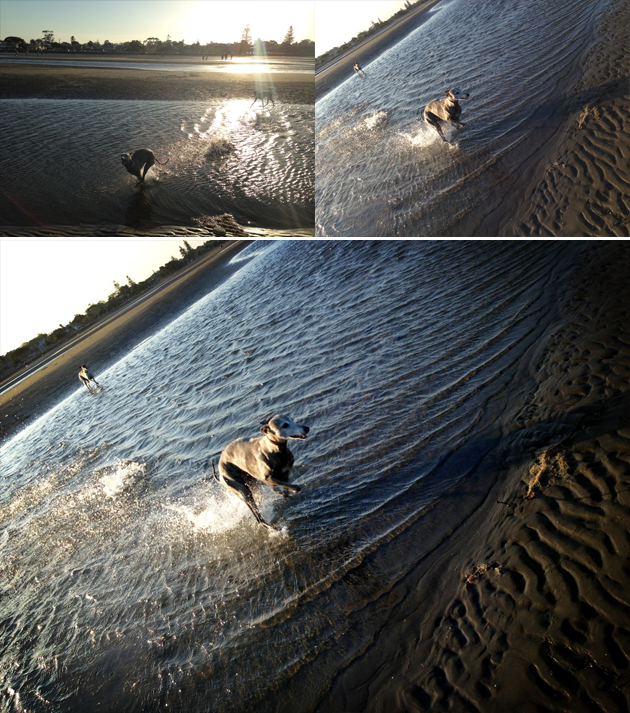 So these are just some examples of how one photo can look quite average, while another photo of the same or similar scene or event can be quite different when taking a bit more notice and consideration of lighting, subject matter and composition.

With its lack of zoom and limited capabilities, the iPhone actually makes you really stop and think about how to best capture your next photo. And in many ways, this will actually make you a better photographer.

After all, it’s a bit like learning to drive on an old manual Datsun 120Y with broken seat belts and no brakes … once you’ve mastered capturing amazing photos with the iPhone camera, imagine what you’ll be able to achieve with a nice expensive SLR!

We use our many years experience in photography, graphic design, corporate identity and creative writing to provide a creative yet professional service that is not limited to one particular field or genre. Our vision is to create work that people connect with to get inspiration, share ideas, and ultimately create exceptional written and visual solutions that enhance clients’ lives and livelihoods.

With over ten years experience in all things creative (plus two design degrees including one honours degree majoring in corporate identity and branding), we have worked in boutique design agencies, national advertising agencies, in-house design and marketing roles, plus many years of undertaking various freelance projects. Design is our profession and photography is our passion, with our dynamic husband and wife team photographing weddings and corporate events since 2007.

Our name, Evocative CC (Creative Culture), means expressive, moving, striking, revealing, vivid and meaningful. We hope some of these words come to mind while you enjoy looking through our portfolio and blog! If you’d like to know more about any of our services, or even if you just want to have a casual chat, send us a message on our contact page. 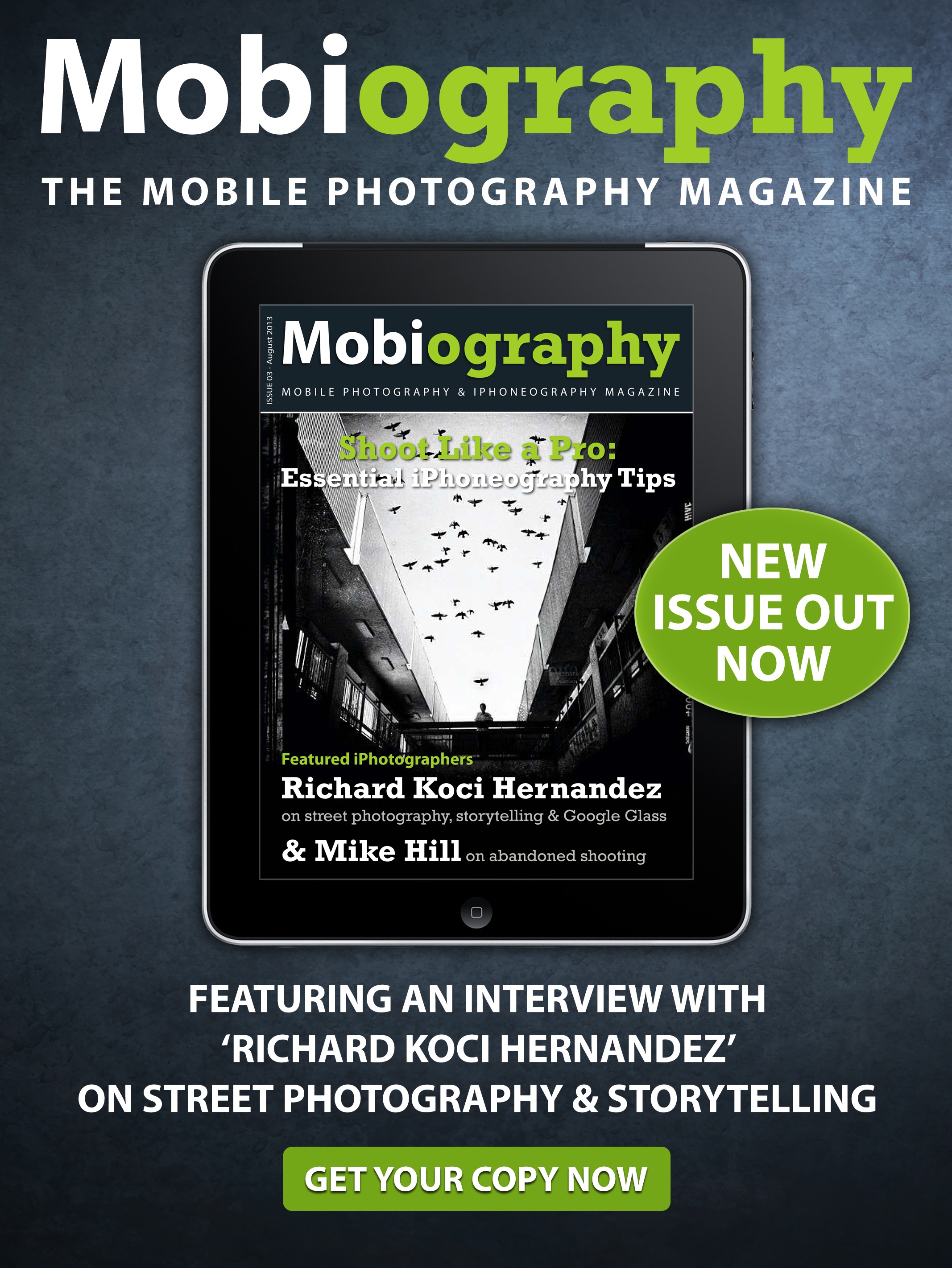