Finding Love on the Trailing Edge of Technology 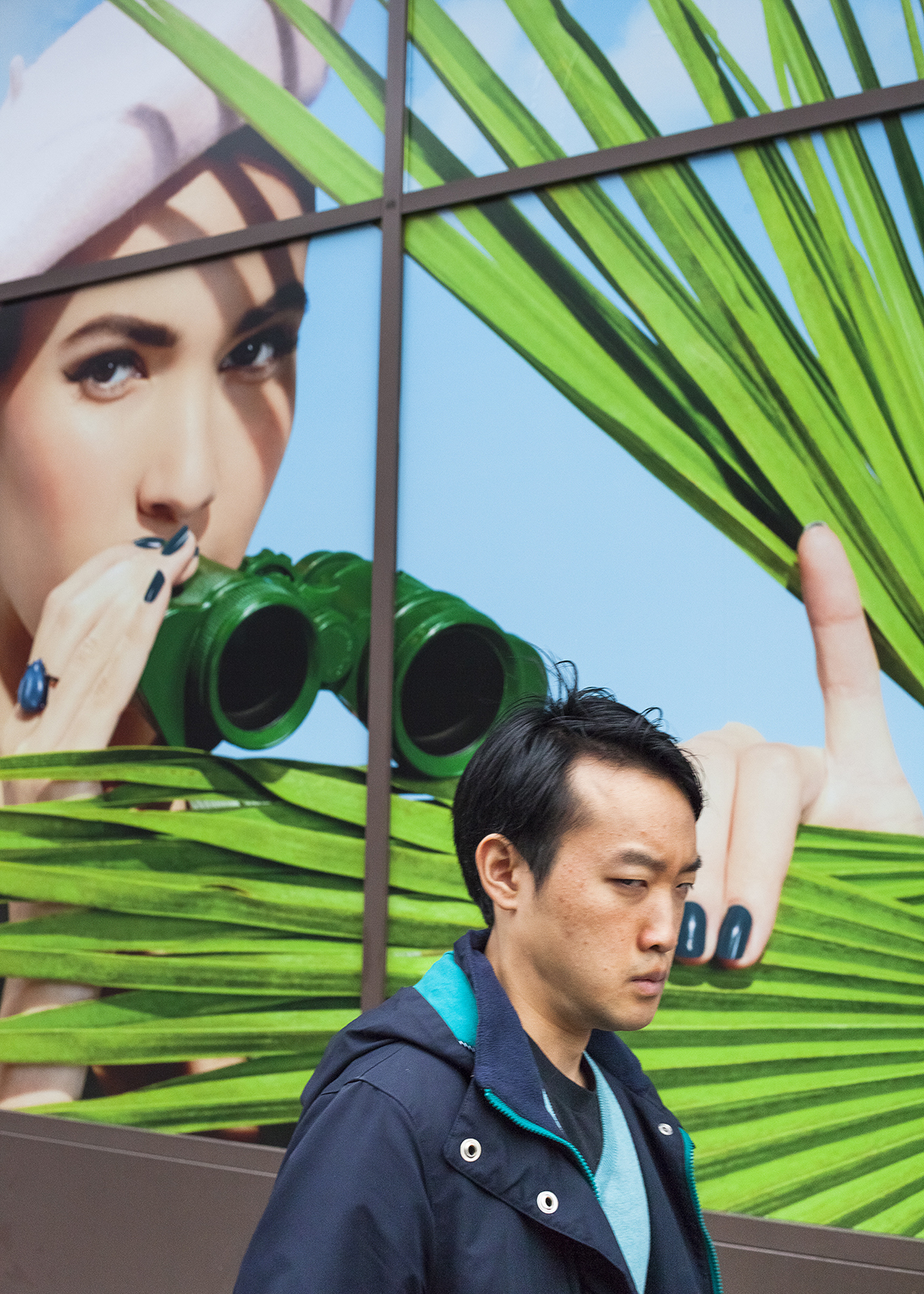 Synergy is a series of photographs that extracts fragments from everyday banal life and utilizes photography’s power to create an alternative meaning. By framing fixed information on the street with unaware pedestrians it creates a somewhat humorous and open ended one-liner that only serves the purpose of bringing out the heh’s and huh’s in the viewer. The photographs violently exploit and manipulate its subjects and place them in story snippets they quite possibly never wanted to be a part of. 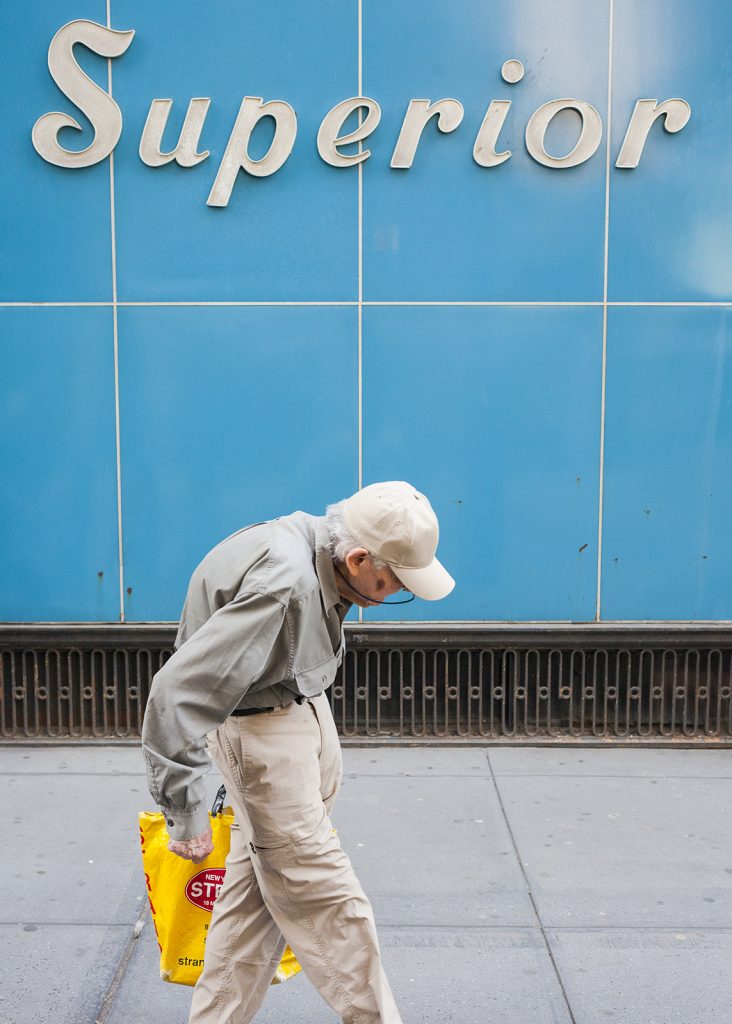 However, the viewer reacts not only to the living subjects but also the split-second juxtaposition of “the fixed and the living.” Exploitation is a terrible word associated with colonialism but it is an inherent part of photographing people, whether out on the street or in the comfort of your studio. The photographer ultimately exploits his/her subject by way of framing, personal aesthetics, and presentation of the picture. 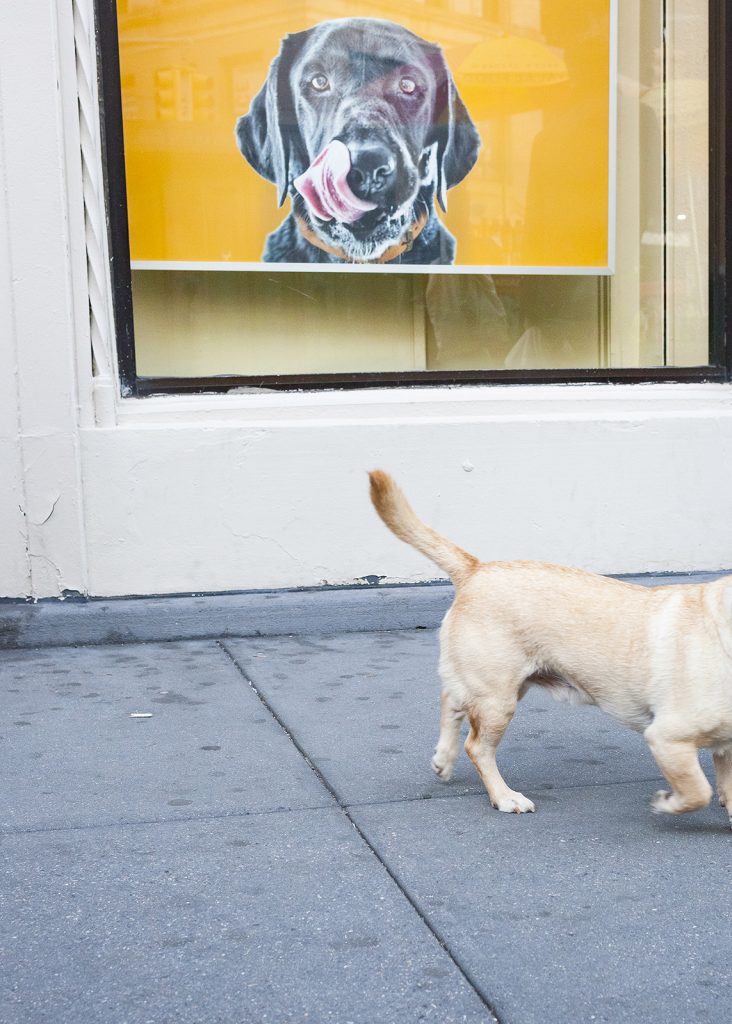 I go out and take as much as I can get from the street until I either can’t go longer or feel I have shot it to death that day. Photography in public is essentially artistic colonialism of people, places and things. The photographer travels the streets and takes and takes and takes — and gives nothing back. Pedestrians are reduced to being living targets, ready to be objectified, manipulated, and printed as they pass through the viewfinder. Focus is primarily put on the single image, without a narrative going through the series.

Each picture in Synergy stands alone as the viewer does not need to have seen anything before it to get the pun. New Yorker cartoon editor Bob Mankoff called humor “a conflict of synergies,” and philosopher Henri Bergson stated that laughter and sympathy have nothing in common, in order for us to laugh at someone, even our own mothers, we must emotionally detach ourselves. The pictures in Synergy are therefore not only manipulating the subjects photographed, but also the viewers, as they respond with laughter, they detach themselves from humanity. 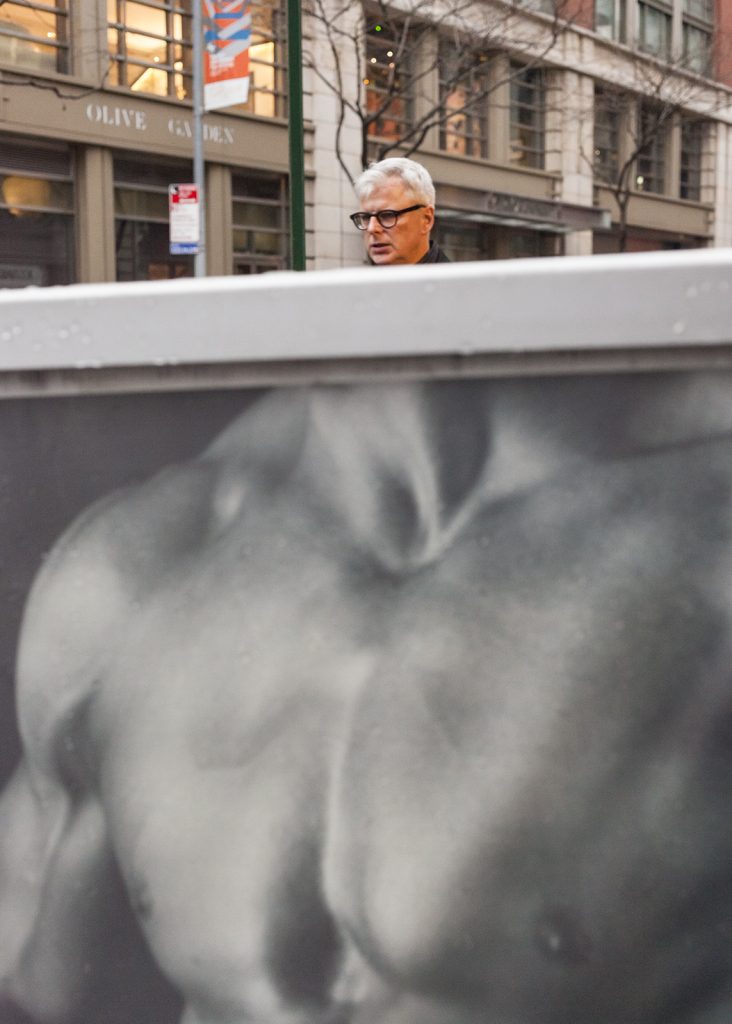 I draw from street photography’s canons of humor, such as Martin Parr and Elliott Erwitt — in addition to contemporaries like Tavepong Pratoomvong and the book Don’t just tell them, show them by Jesse Marlow. There is a special aspect in street photography, that it doesn’t quite relate to other genres, it’s the lack of control. Having a fraction of an idea in mind but having little or no control over how (and sometimes why) to freeze it. Most of the time when I am shooting out in the streets, I am simply responding to what is available and walking mindlessly and contemplating with myself whether or not a picture is to be found in this or that place. 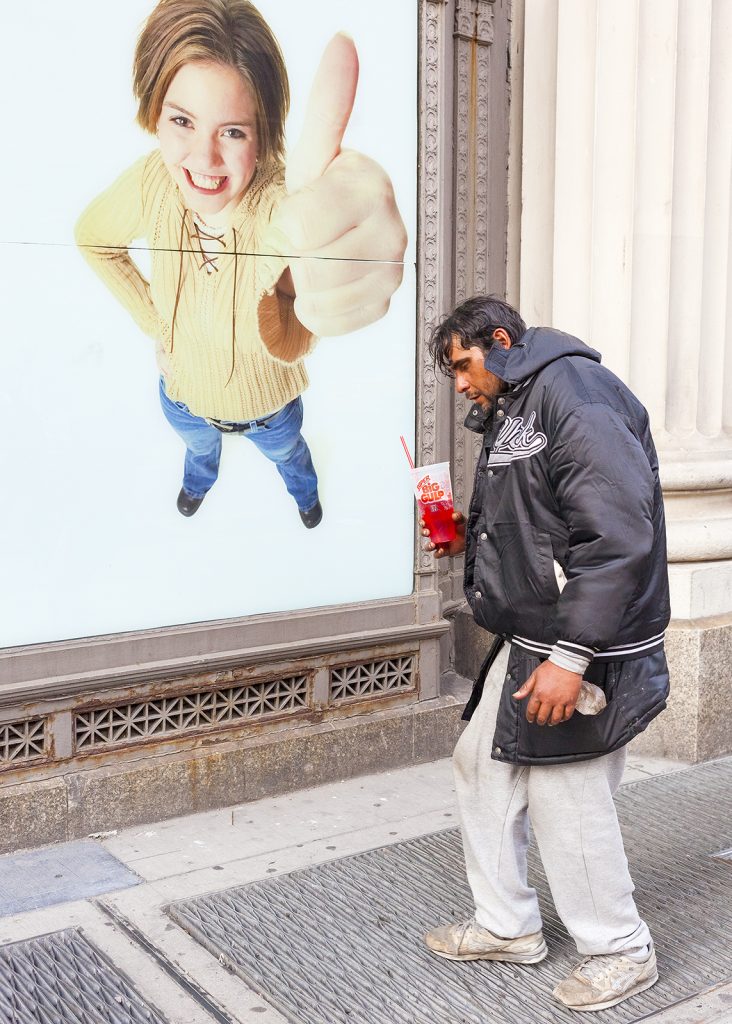 With Synergy, my intentions, actions, and executions are far more deliberate than what purists would call street photography. I respond with my eyes and only my eyes, and visualize the picture in my mind and what kind of subjects I want to be in the frame and where, only then the camera is raised. For each picture in the series I spent anywhere between 30 minutes to a few hours, spread over a couple of days. Shooting hundreds of frames, from various angles in different types of light. This could go on forever, I will probably never have the perfect picture from each location, which is one of the elements that draw me to photograph strangers in public. In addition there is a certain thrill factor involved as well, you never really know who’s likely to confront you, shout, and demand for files to be deleted. The images are calculated, digitally slick and not the least gritty, but at first sight they seem to have been made on the fly. 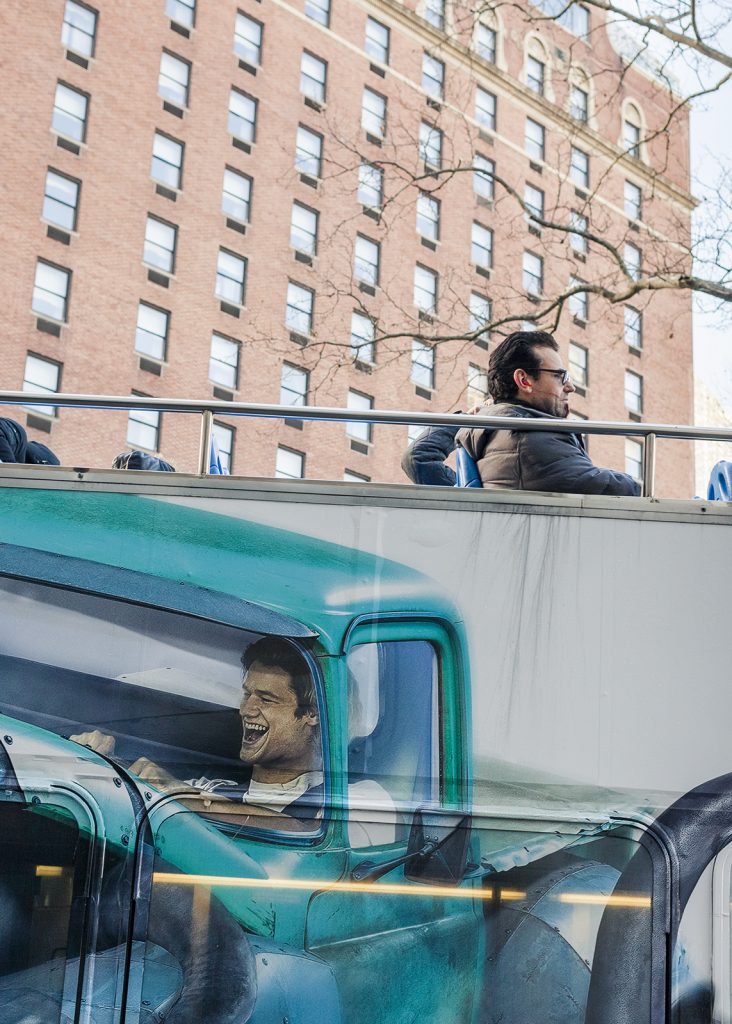 They mimic Henri Cartier-Bresson’s Decisive Moment, where everything comes together in the frame. It is all balanced: the light, the subject, the geometry, et cetera. Cartier-Bresson continues to this day to fool his viewers into thinking that all of his images were snapshots (although his decisive moment was not about snapshots, many associate it with them), caught in a blink of an eye as he passed through the streets of the world, unnoticed. Most of his famous pictures are actually either totally set up or within a scene that he worked to death. I have no intentions to uphold this myth within street photography and try to lie that I am so extremely responsive to my immediate surroundings and quick, that I took these pictures in an instant and moved on to others. 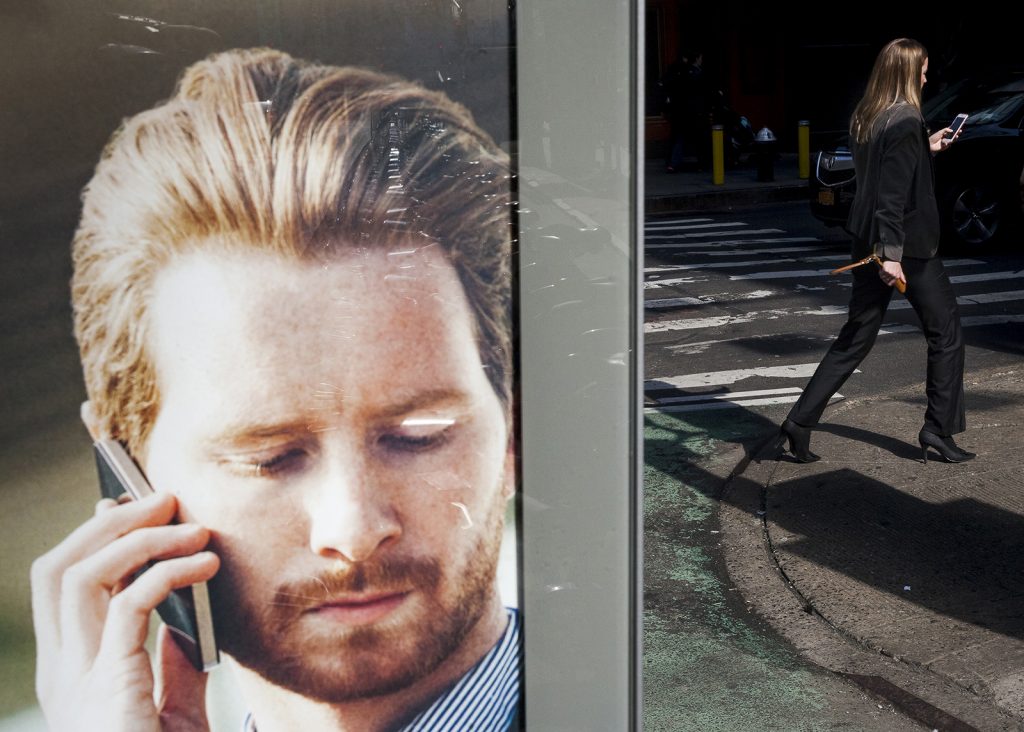 Gerry Badger wrote recently regarding the harsh criticism Martin Parr received for his book The Last Resort. “Something that he was challenging whether he knew it fully or not. After all, Parr was only making photographs. The Last Resort, as Val Williams rightly notes, was basically “an exercise in looking.”
Synergy is very much “an exercise in looking,” for the viewer and the photographer as well. The speed at which society functions can be reduced or fully stopped with cameras and that alternative reality tests our perceptions, as the banal becomes interesting, it forces us to slow down ourselves, and look. I see it both as a challenge and privilege to be able to work in an environment so ripe with imagery, when viewed with exercised eyes. 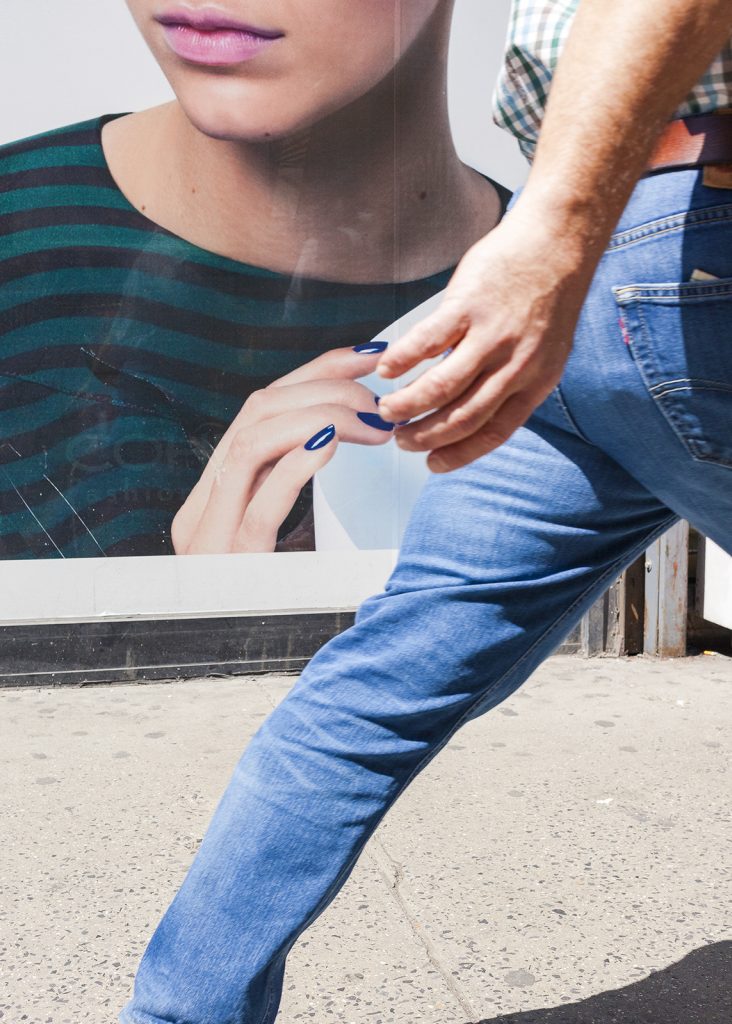