In Rome and Tuscany

Two Months with my Fujifilm X-T1

Create a Photo Blog with WordPress

Long on our list of destinations and short on remaining time in France, we finally checked off this stunning city. As true tourist we hit all the top sites: Colosseum, Roman Forum, Trajan’s Column, Trevi Fountain, Vatican City and Museum, Piazza Navona, Piazza de Spagna, and Palazzo Massimo Museum. Oh my, what a list, huh!

But it was the Pantheon that I was the most interested in seeing and the most monumental site that left a mark. It was built around 25 BC with a single oculus at the top of its dome, its only source of light at the time. Yes, it rains inside. The elaborate drain system underneath the holes in the slanted flooring whisks away the water. Seven Italian kings are buried here along with Rafael. George and I stayed for a long time inside the Pantheon and marveled at its beauty, architectural design, and the fact that for two thousand years, not much has changed with the look of the structure both inside and out. 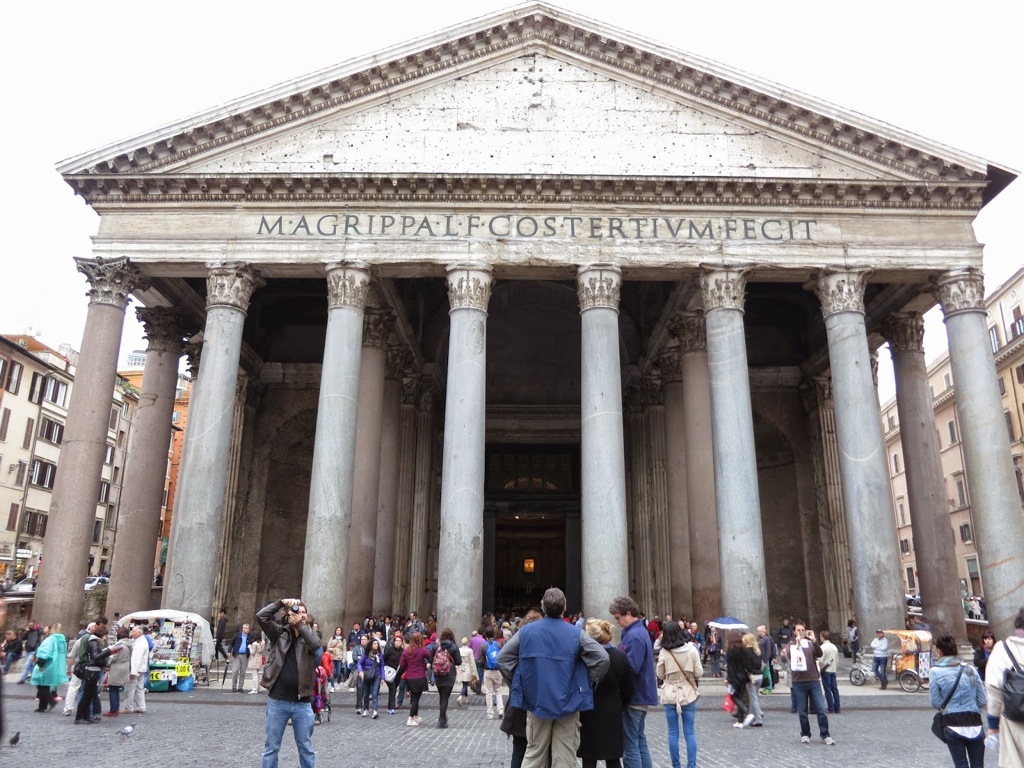 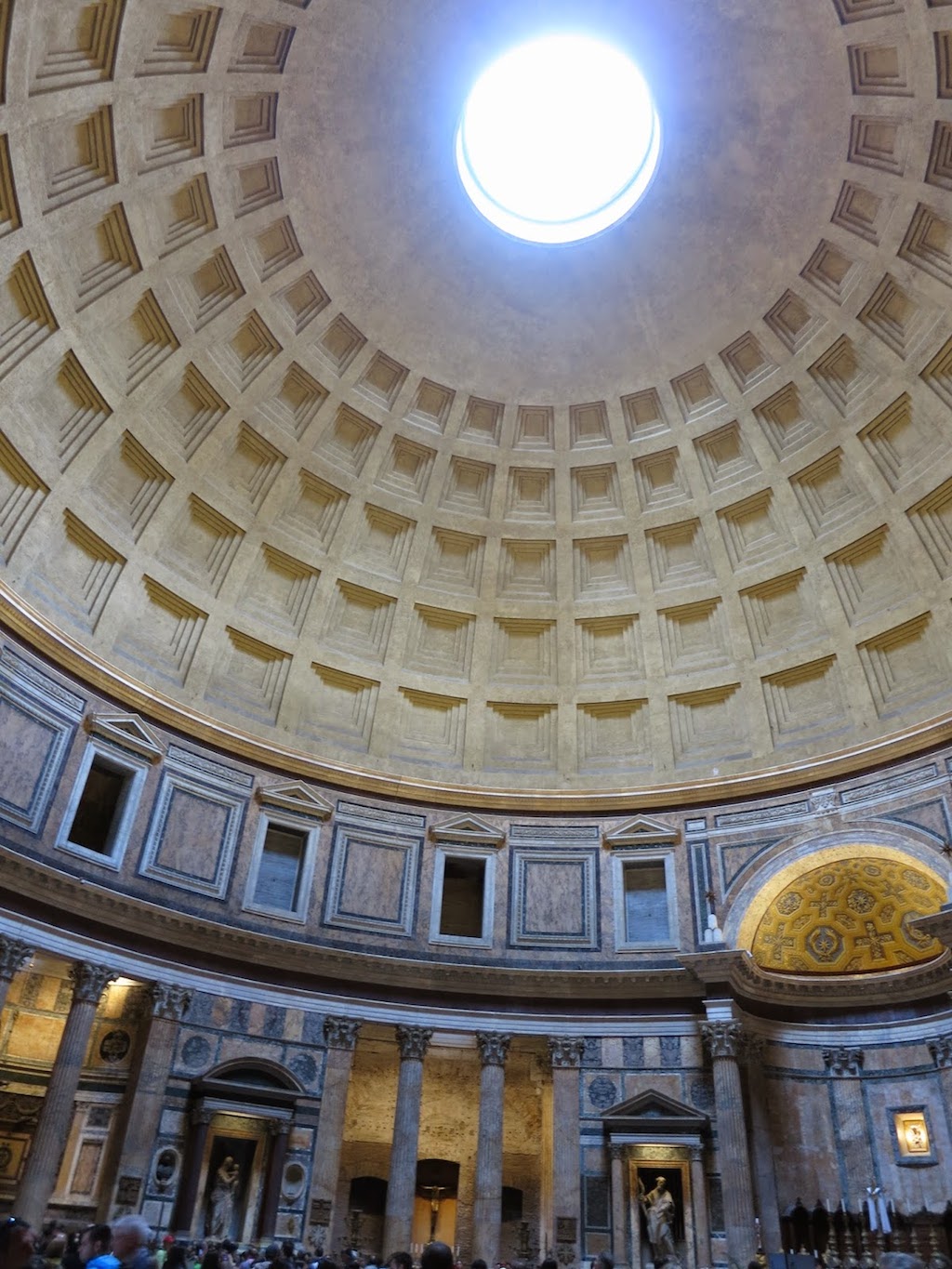 Sensory overload could be a common occurrence while visiting Rome, there is so much to see, learn, and experience. This too might have been the case with us taking in the collections at the Palazzo Massimo Museum, another must see. Beautifully preserved frescos, mosaics with the tinniest of details and extraordinary sculptures. One of the most outstanding bronze sculptures, Boxer at Rest (dated to the 4th-2nd century BC.), was unearthed in 1885 by archaeologist Rodolfo Lanciani who wrote:

I have witnessed, in my long career in the active field of archaeology, many discoveries; I have experienced surprise after surprise; I have sometimes and most unexpectedly met with real masterpieces; but I have never felt such an extraordinary impression as the one created by the sight of this magnificent specimen of a semi-barbaric athlete, coming slowly out of the ground, as if awakening from a long repose after his gallant fights. 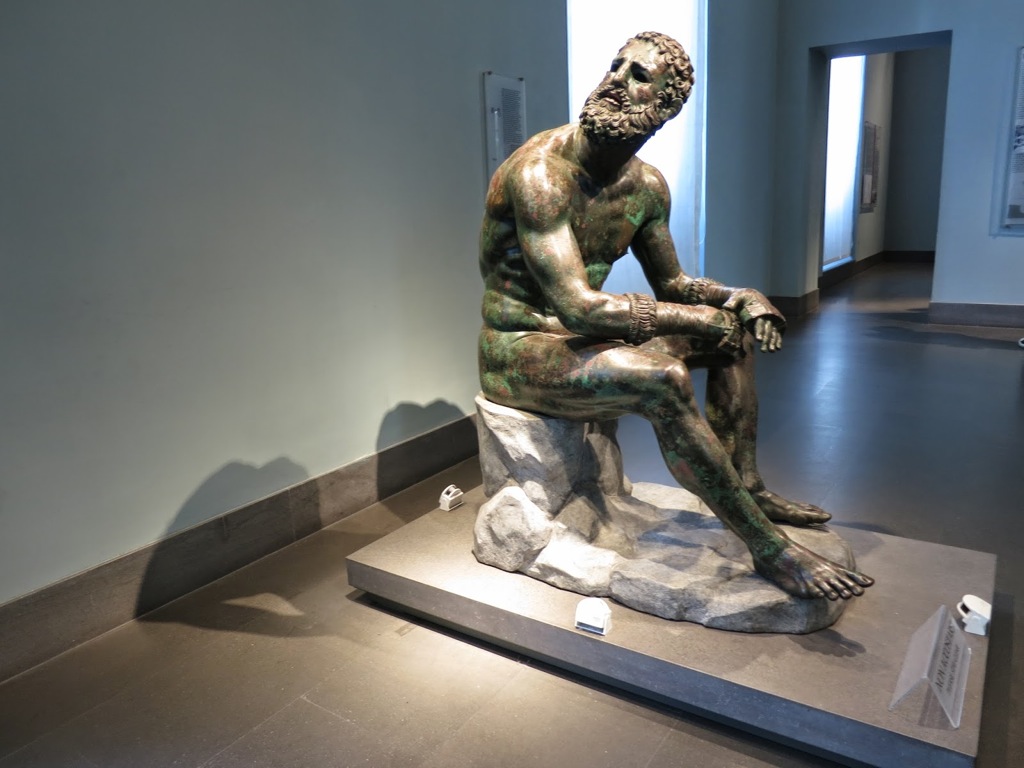 Our last day in Rome we weathered the colossal crowds to visit the Vatican Museum and in particular, the Sistine Chapel, Michelangelo’s masterpiece of frescos. Here again, we stayed for a long time finding seats at different sides of the chapel to admire this phenomenal work of art. No photos were allowed, so our memory will be forever stamped somewhere in the grey matter.

The collision of holidays for several European countries was perhaps the reason for the extreme amount of people in Rome at the beginning of May. After dodging people and cars near the attractions, lengthy lines, and sensory overload, I hated to say it, but we needed to escape the city rat-race.

After four days in Rome, it was time to head for the hills of Tuscany, and what a pleasant change it was. We were glad that we visited Rome first and then Tuscany, instead of the opposite route. We rented an apartment on a restored 17th century farmhouse village near Monteriggioni and the accommodations could not have been more perfect. Fantastic views and quiet surroundings, (except for the predawn neighborhood Mr. Rooster), and we were greeted almost daily by the owner’s English Setter, Chito. 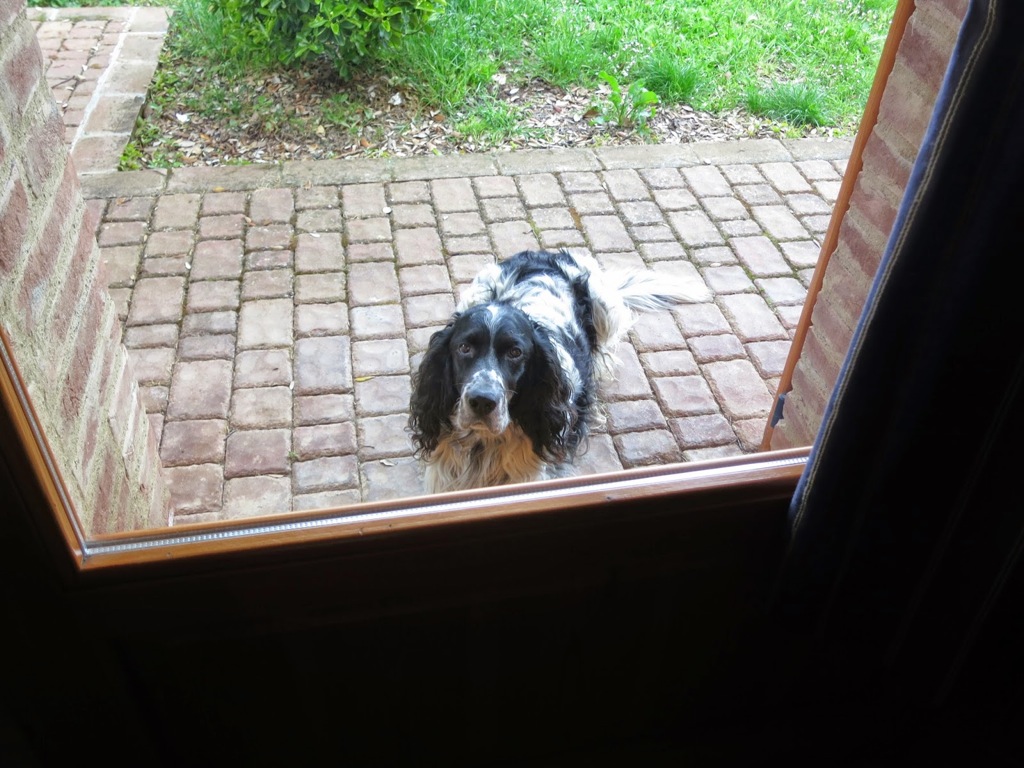 We made the best use of our time, slowing down our pace, but still saw a lot in five days. Each village had its own character and charm, and they all had their own story to tell. I learned a little bit more about the ancient pilgrim routes leading to Rome too.

After leaving the four-lane motorway and navigating the winding roads of the countryside, we whipped around a corner and there it was – Pitigliano. The buildings look like they are growing right out of the rock. What a sight! Pitigliano is/was known as “Little Jerusalem.” The maze of medieval streets were magical. 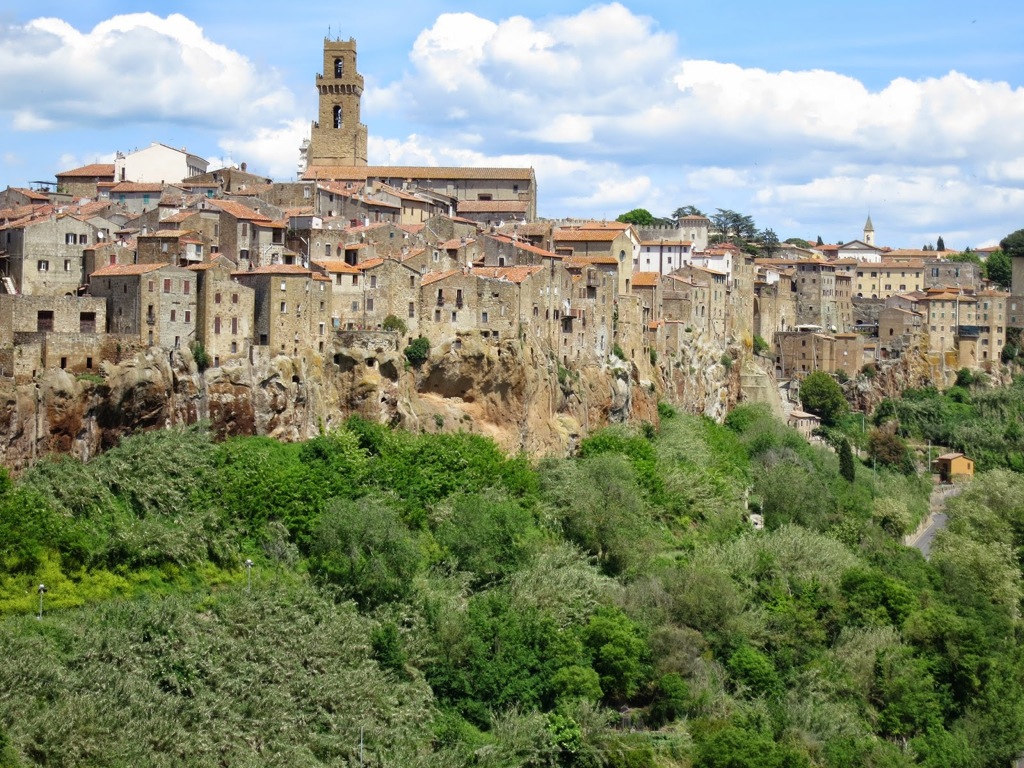 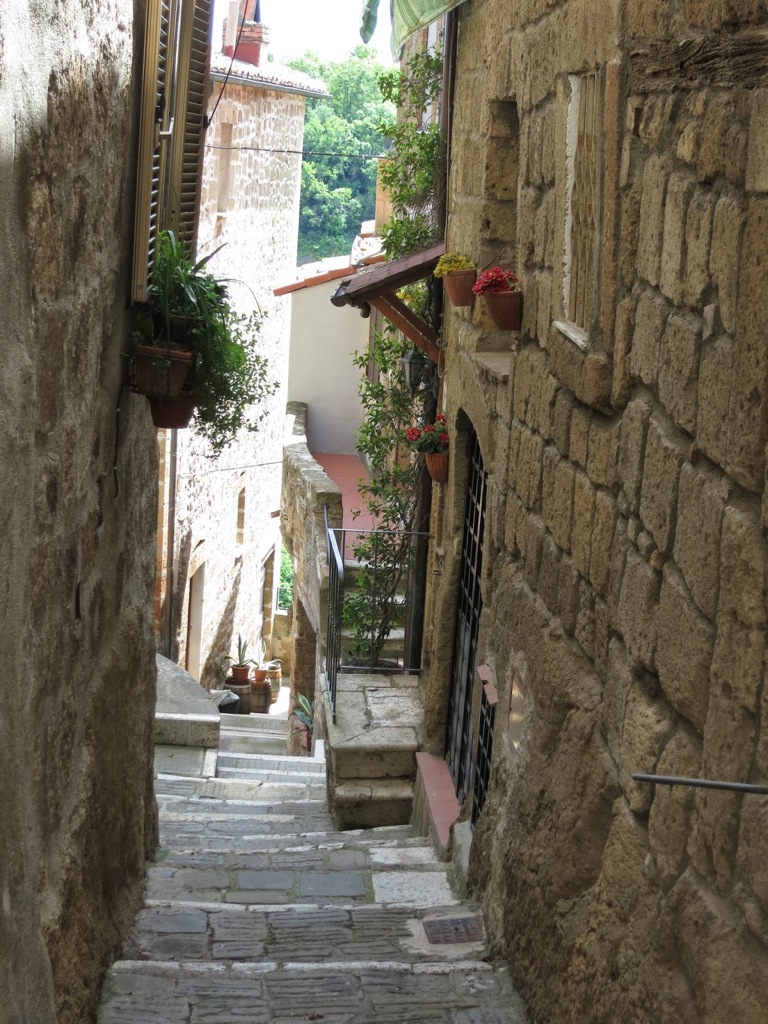 San Gimignano, a more popular village than Pitigliano, you will find, as in most of the more favored villages, a vast array of art galleries, wine shops, ceramic stores, artisan products, meat/cheese stores, and restaurants. The church in San Gimignano held 14th century frescoes comprising episodes from the Old Testament. 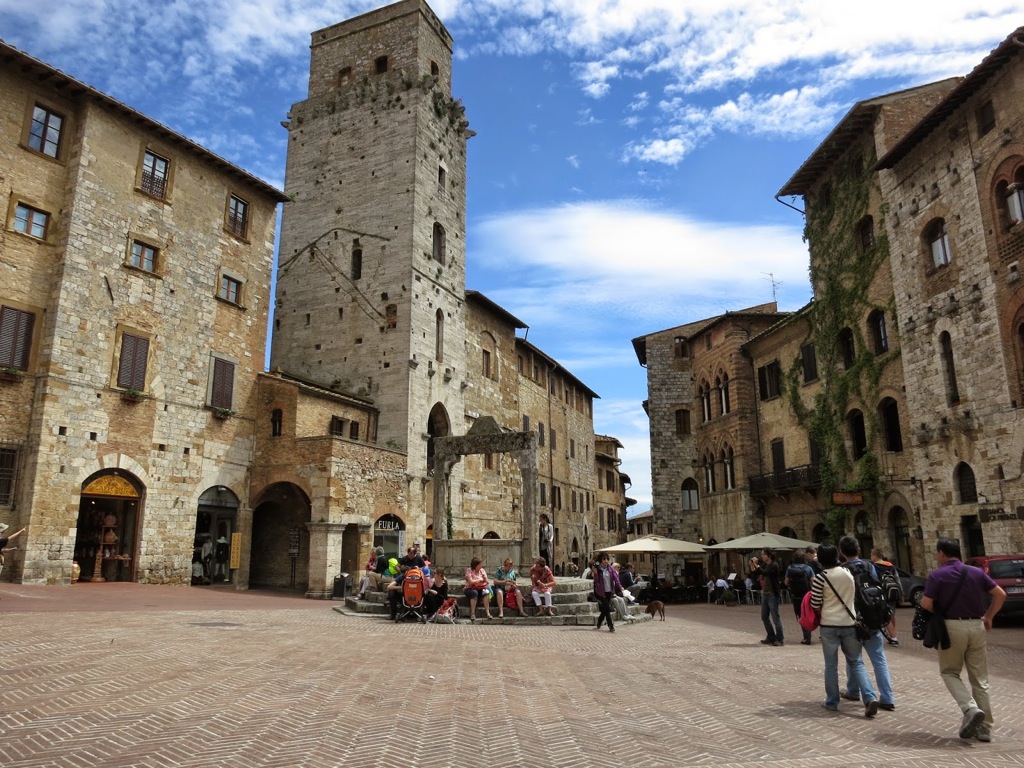 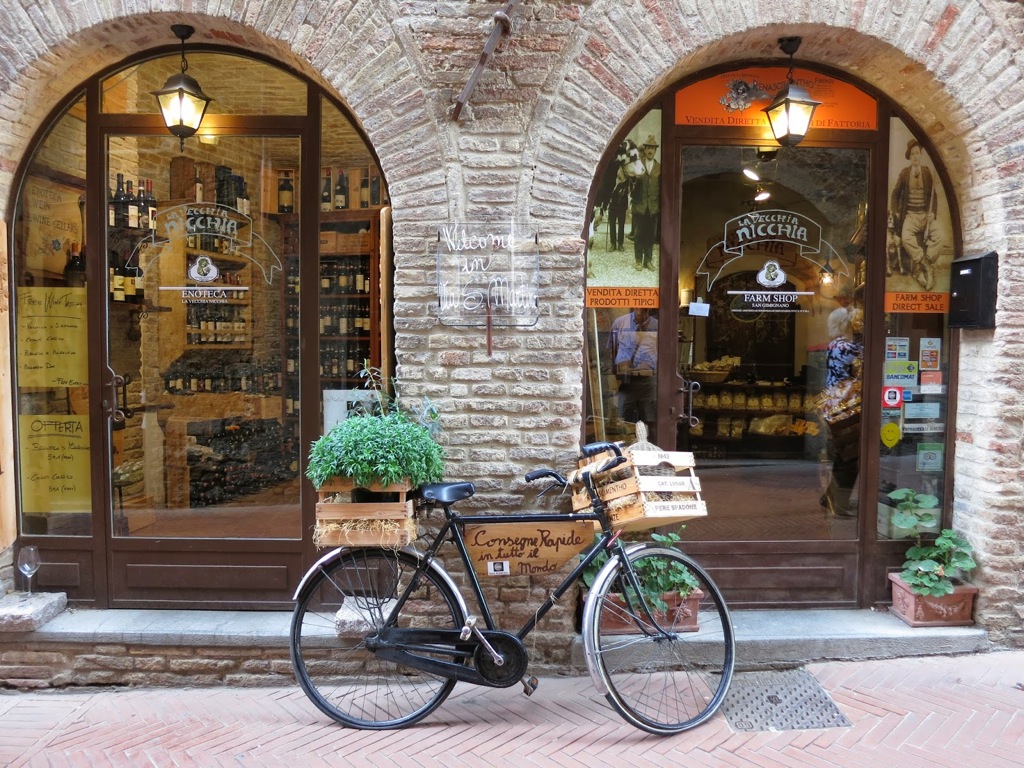 Volterra, similar to the other villages we visited is situated high on a plateau that offers impressive views to the valley below. For 2,500 years alabaster has been mined and used by local artist here. Many shops sell everything imaginable using this mineral. 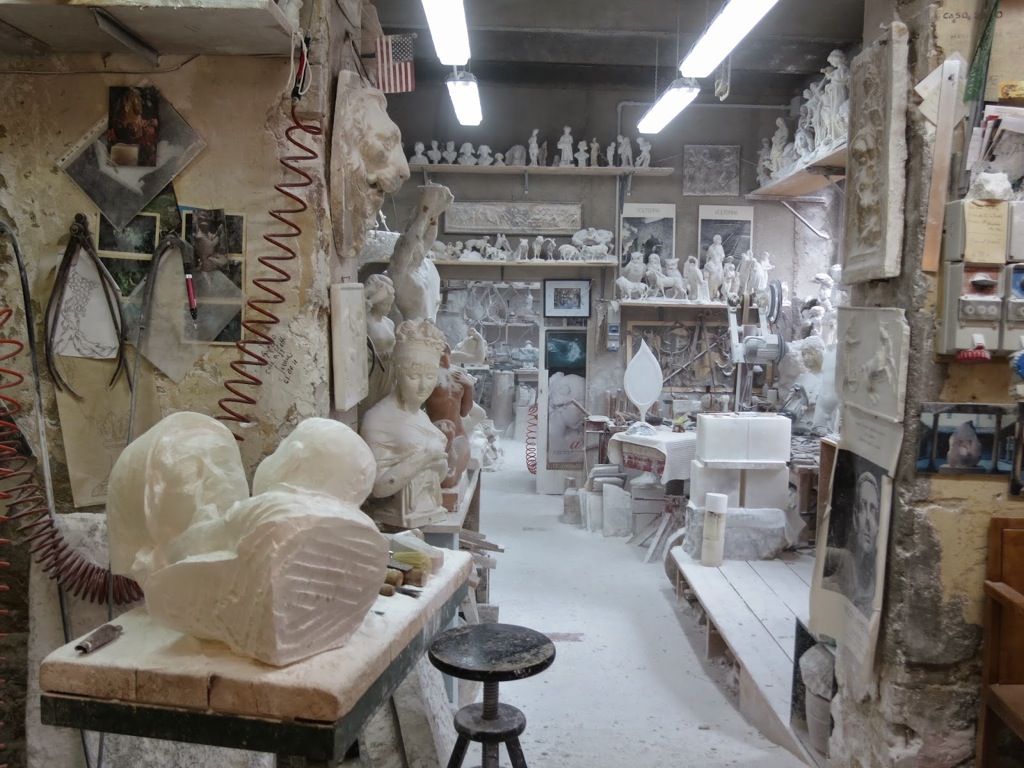 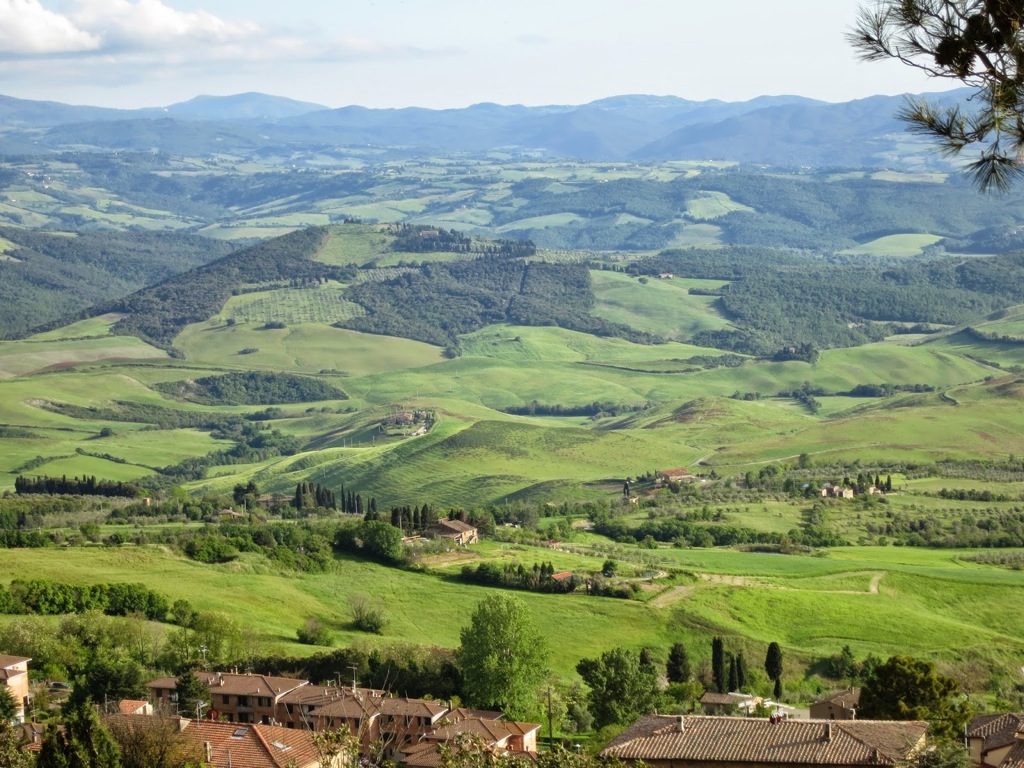 Monteriggioni like several of the other villages is a walled city. You park your car outside the walls, and the inner village area is pedestrian traffic only, except for deliveries and residences. There is something special about a village where there are no cars to hear, smell or dodge. Monteriggioni looks like a true castle from the outside with fourteen fortified towers. It was built in 1203. 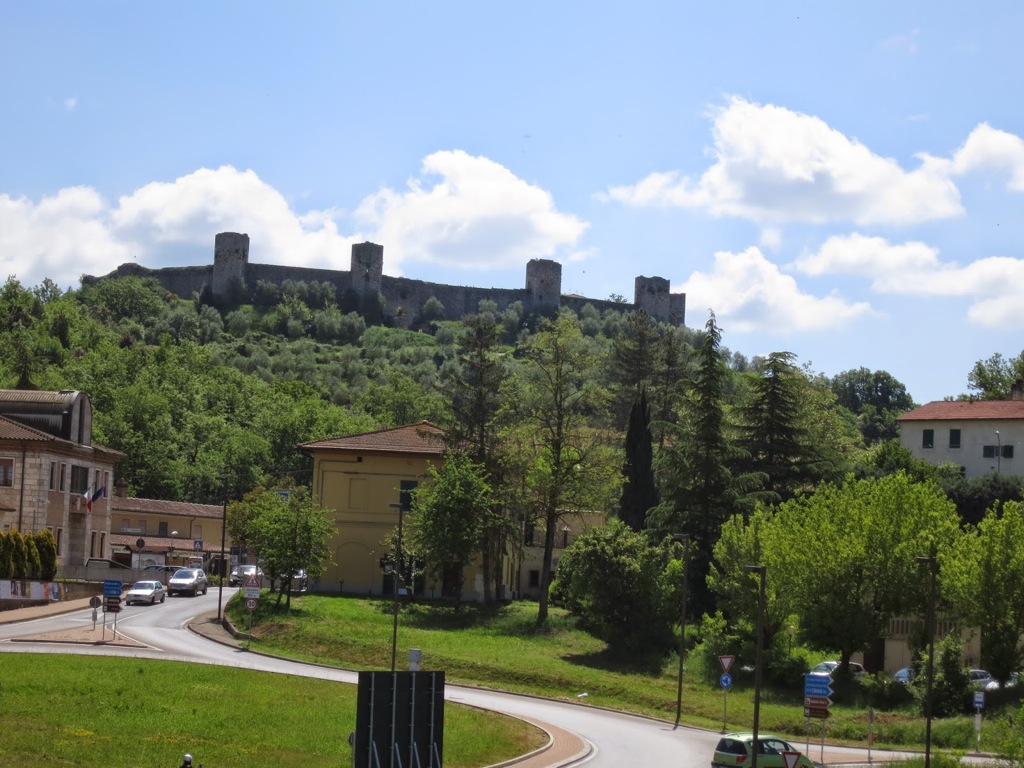 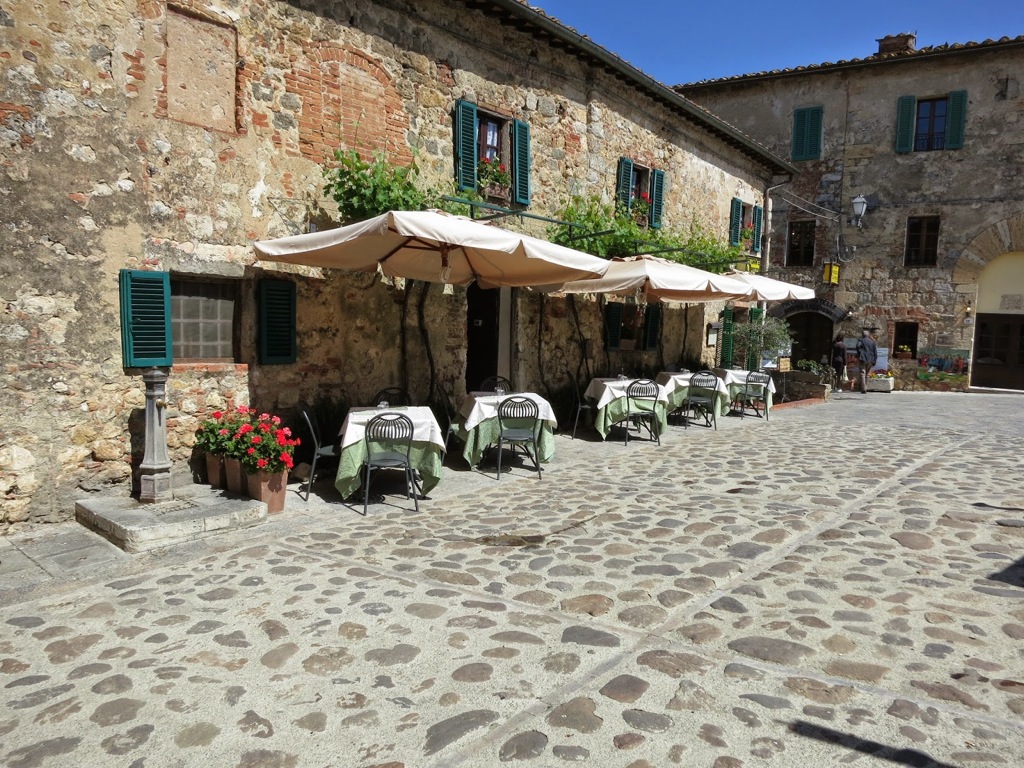 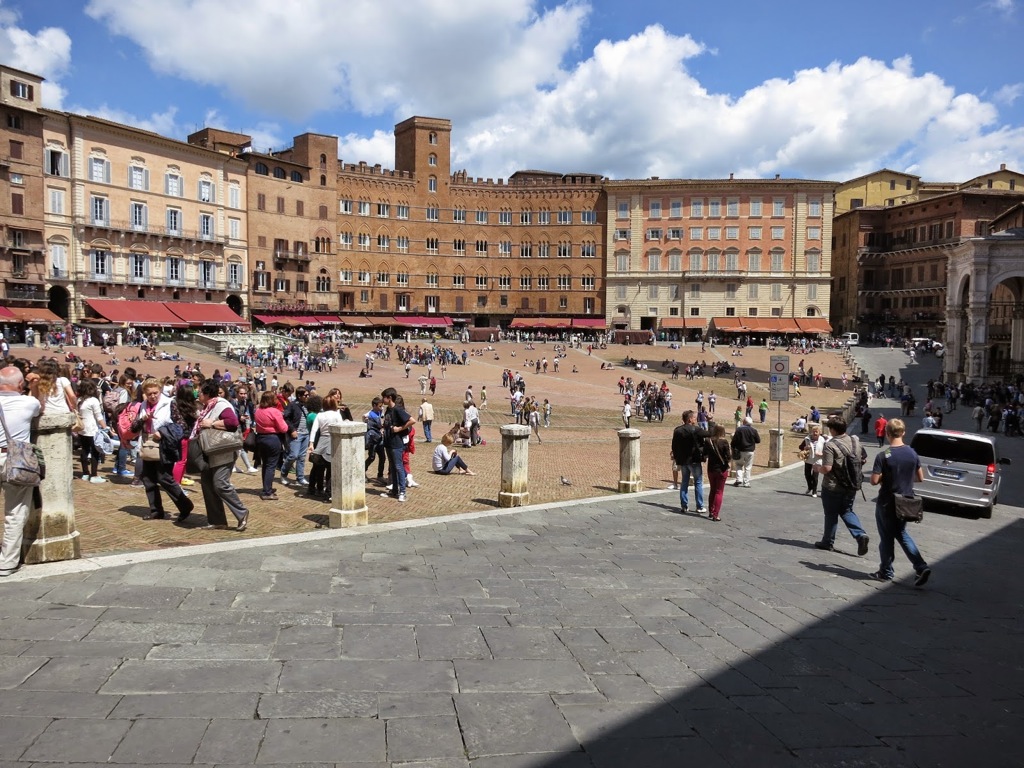 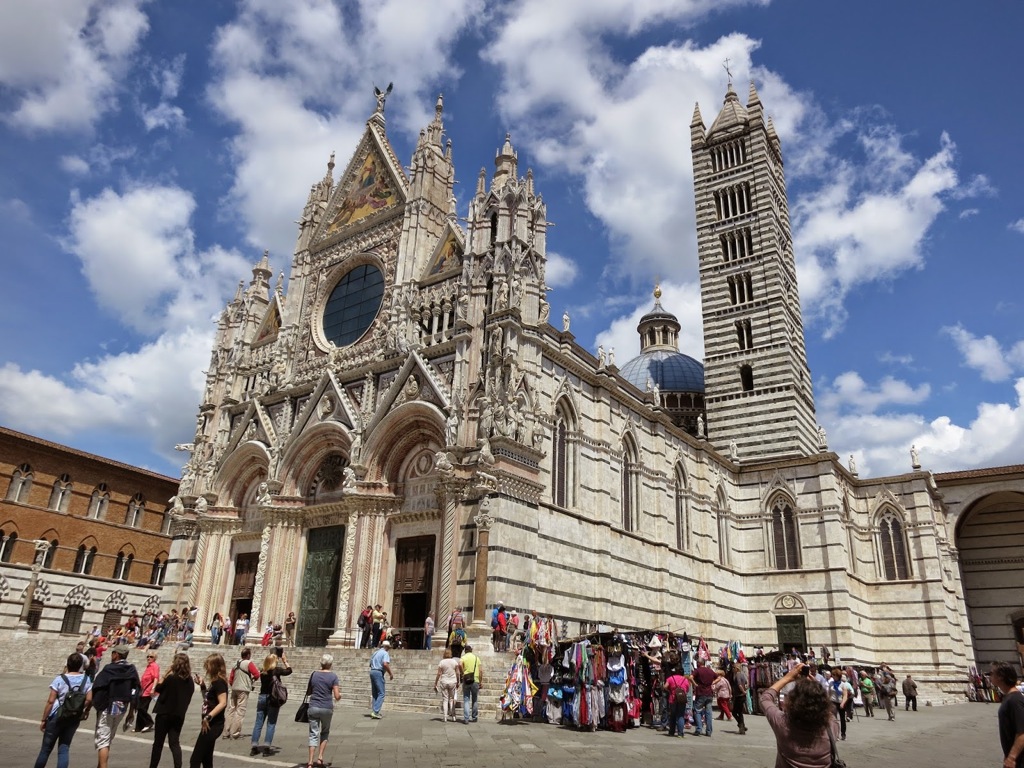 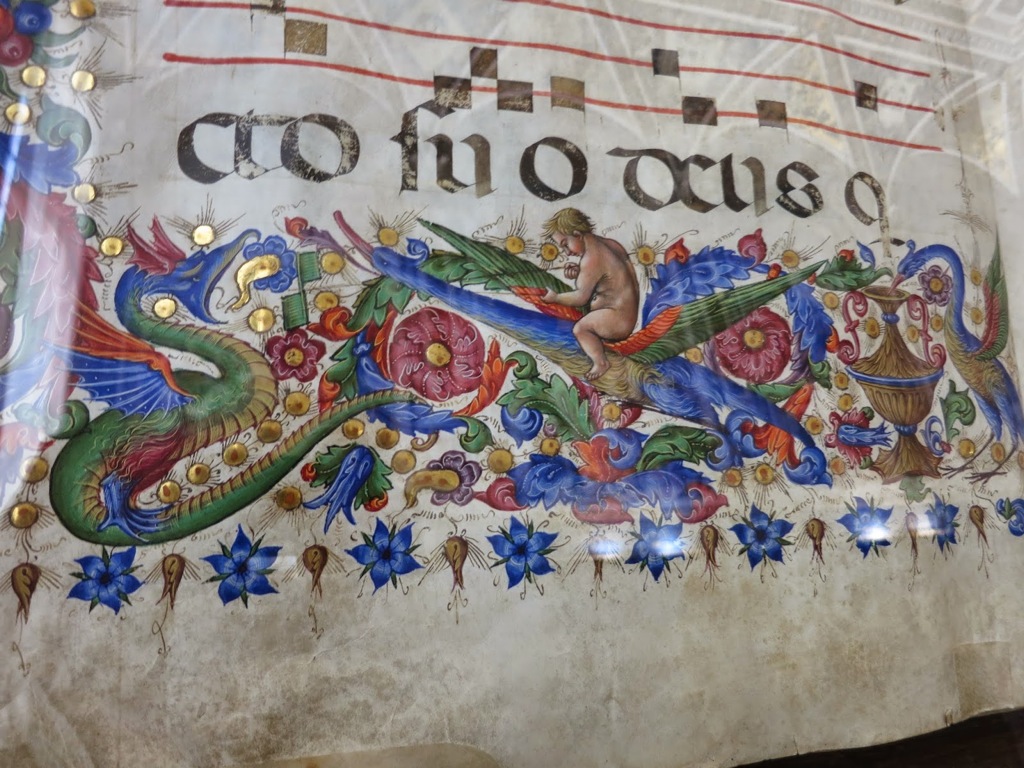 The Leaning Tower of Pisa is a phenomenal structure for the very fact that it is still standing. Construction commenced in 1173 and by 1274 it had already started to tilt. In 1995 it was 17.6 feet from vertical. The tilt is due to a shallow, sandy silt, subsoil (that’s a tongue twister) foundation.
Galileo climbed to the top of the tower to perform experiments on the velocity of falling objects. You can buy a ticket to walk to the top, but I did not want to walk underneath the tilting part for free. It looks like at any moment, it’s going to tumble over. But it is a beautiful white marble structure nonetheless, and I hope someone does something to keep it from falling. 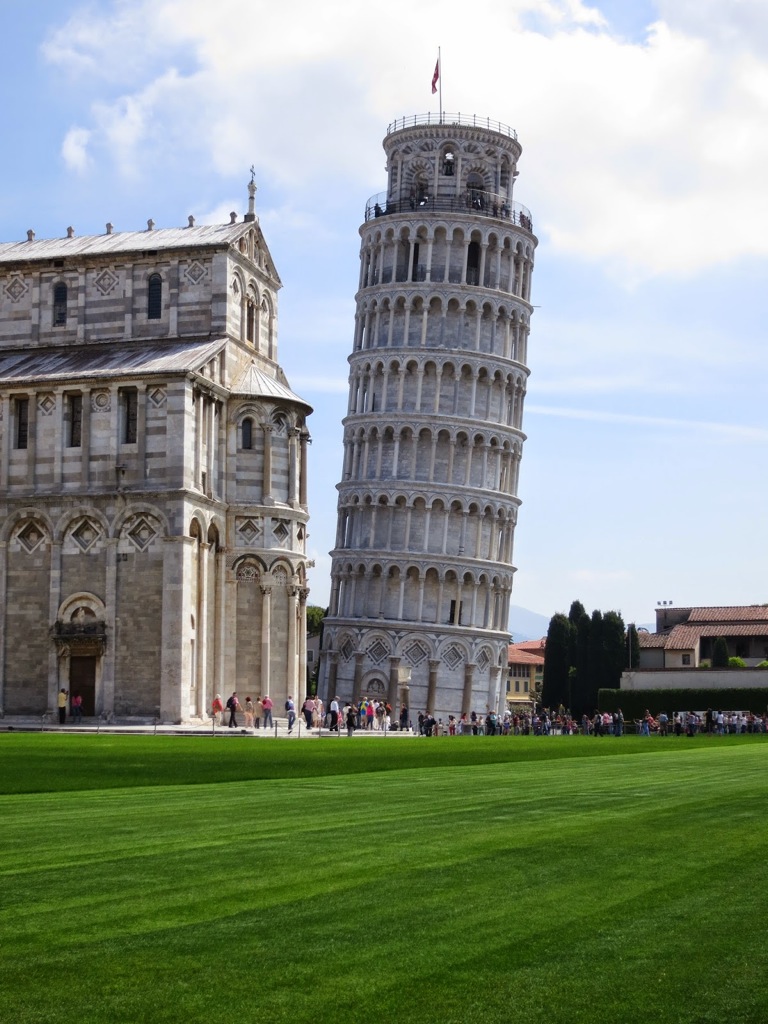 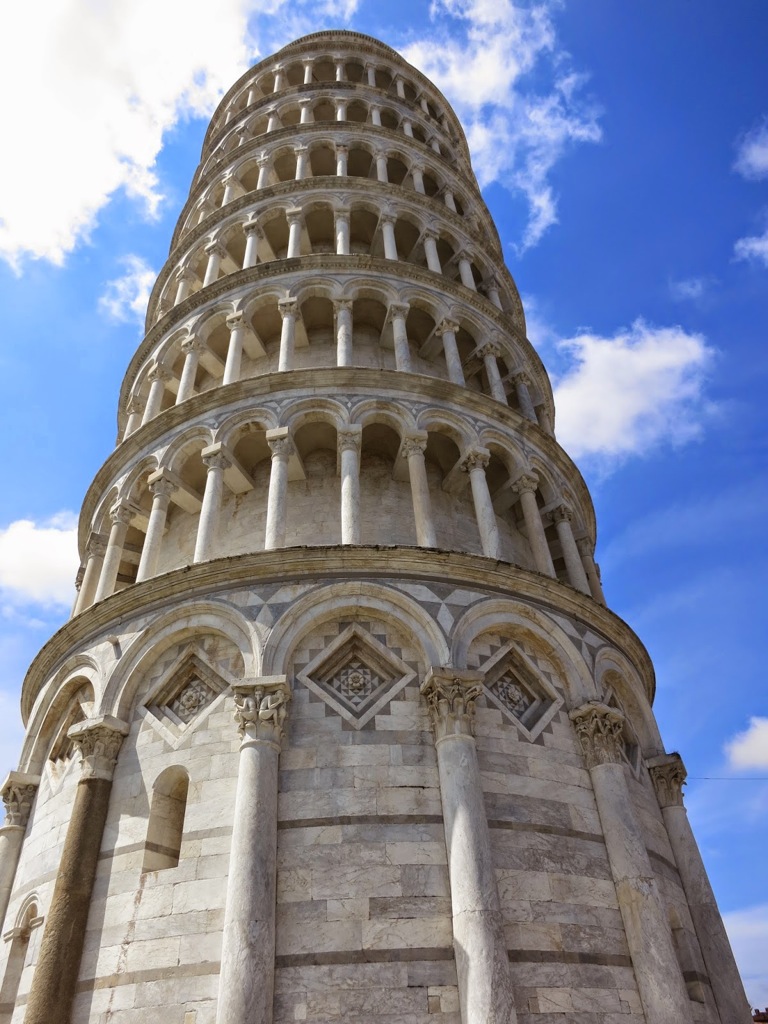 Just a little down the road from Pisa is the city of Lucca, that is, need I say it again, a walled city for pedestrian only traffic. It is a very popular bicycling city with many places to rent. Our ride around the top of the tree lined wall was a delight and we got a good view of the inner city. Riding in the city center is fairly easy mid-day when there are less people shopping. Lucca is surround by mountains in the distant north. 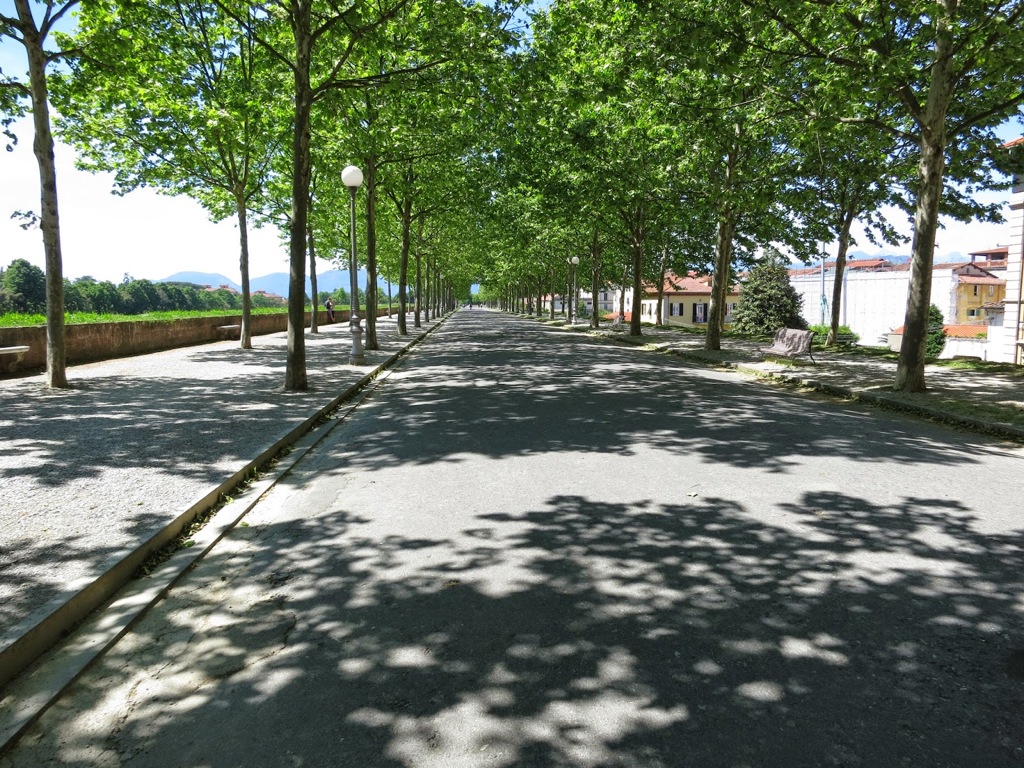 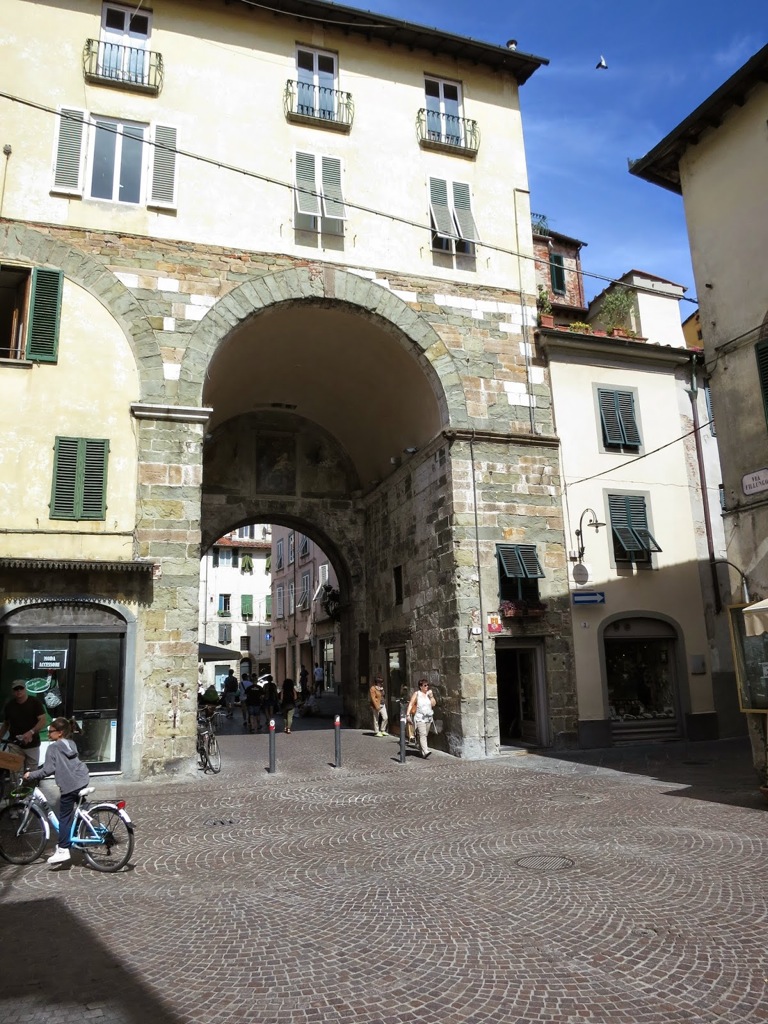 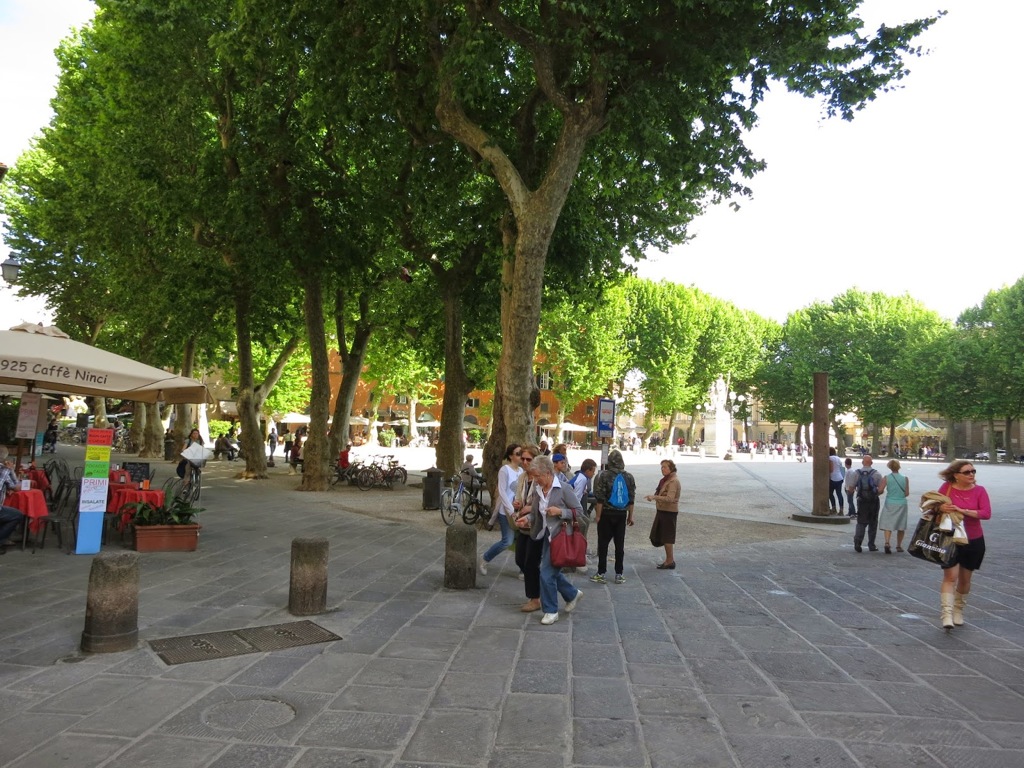 Pienza was probably our favorite village in Tuscany. All the villages/cities were clean, but Pienza had that something extra special about it. Every flower or plant in perfect condition, every rock in place, every store front window sparkling, without a finger smudge to it. You could tell, the people were very proud of their village. We weren’t sure what event was taking place in Pienza that day, but it involved flowers. We stood and watched as the men composed a mosaic made of flower pedals and greenery. Pienza is known for its Pecorino cheese made from sheep’s milk. Fantastic view can be found from the borders of the city. 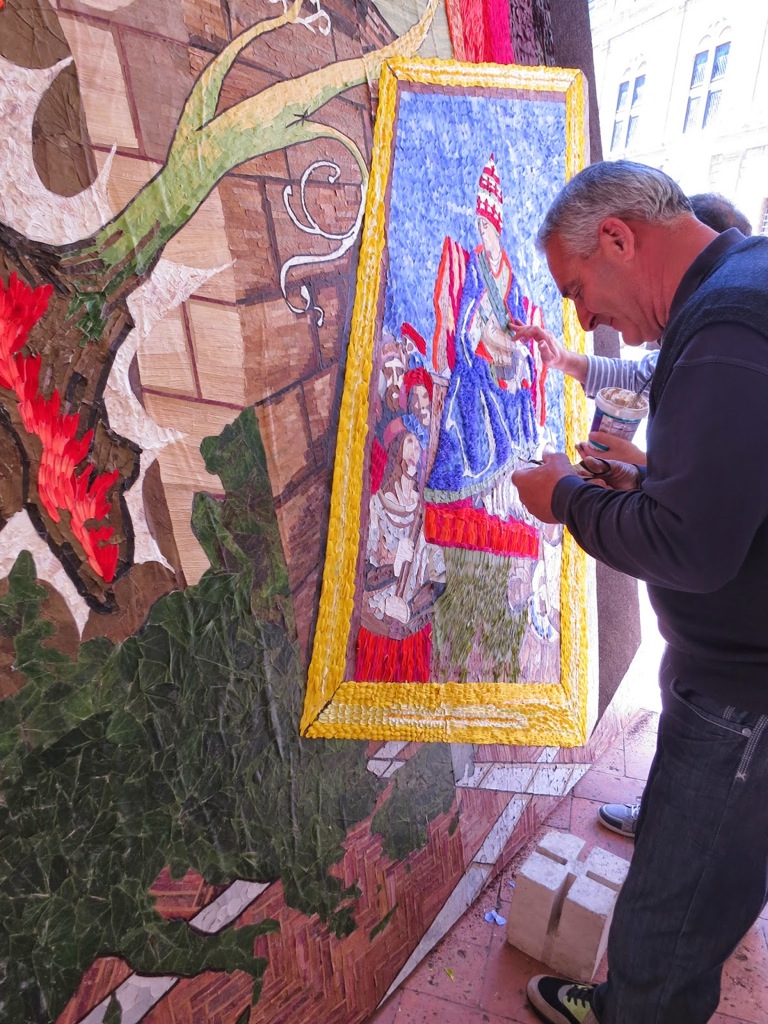 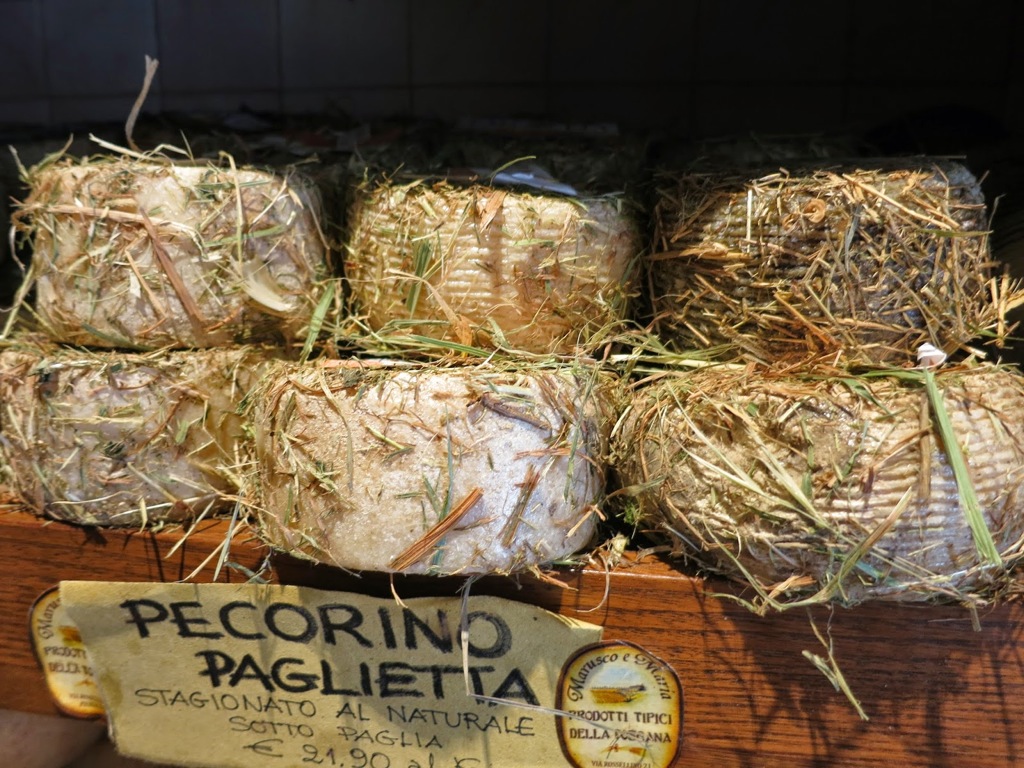 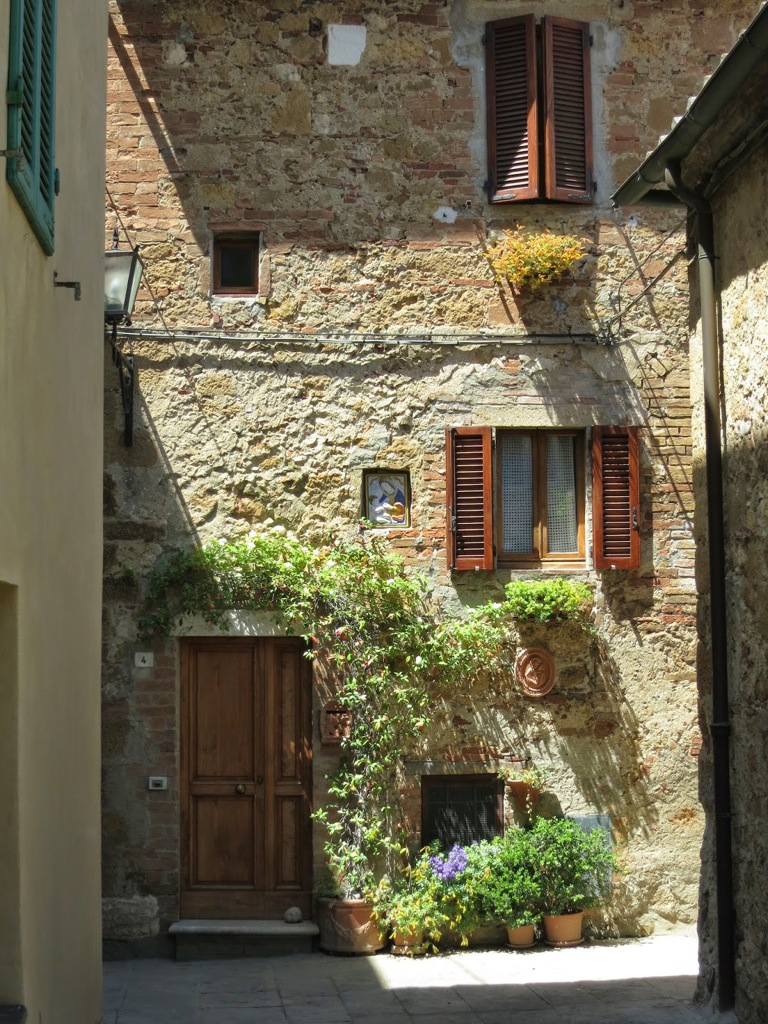 Montalcino, known for the surrounding vineyards of the famous Brunello wine, is a charming village as well. Not surprising, there in an abundance of wine shops here. We did not find many people in the village, so maybe they were all out enjoying their Brunello in the countryside. There is a 14th century fortress or castle that sits outside the village. 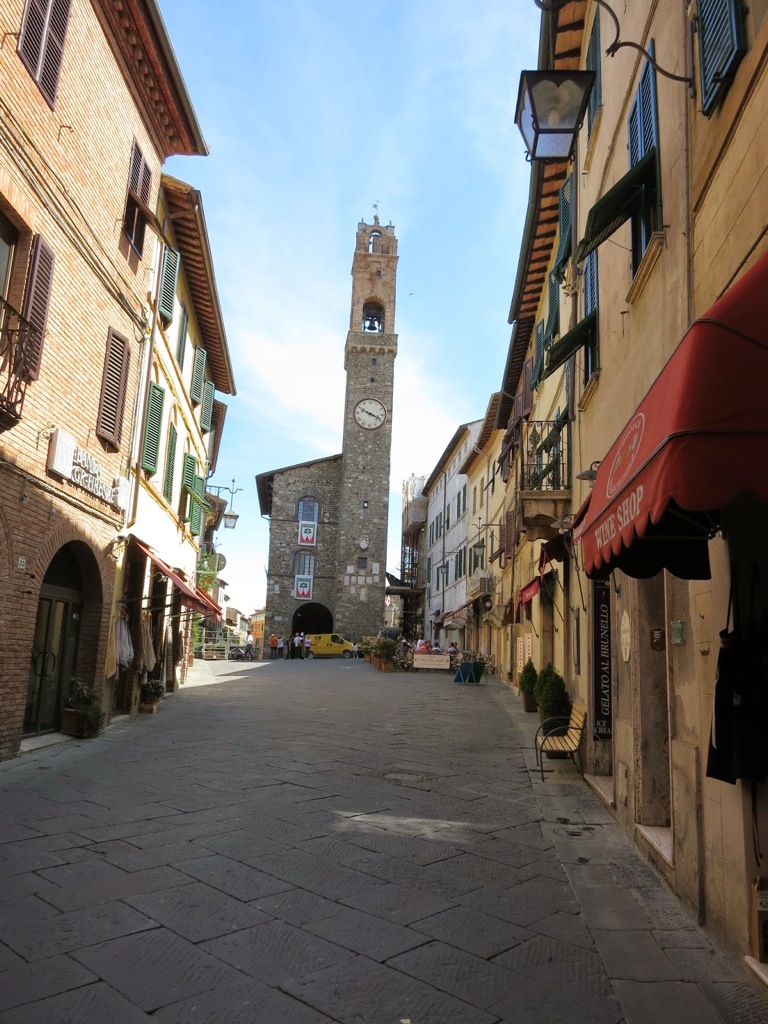 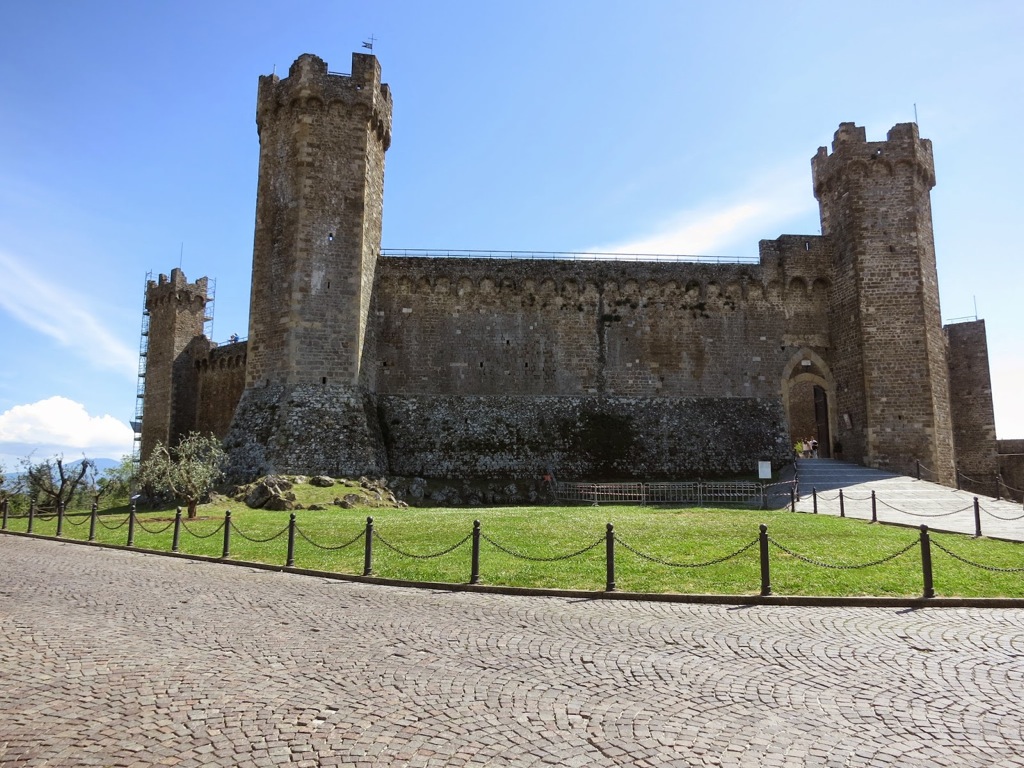 We learned a new word in Italian that we didn’t hear before in Venice or Florence. This word is Prego. It seems this word has multiple meanings, and different inflections help with altering the meaning too. I know, or I think I know, that it means here you go, but perhaps also ok, you are welcome, no problem, yes. So when in Italy, remember this word, it will be very useful to you in many situations.