How to Change a Country, its People and its Environment 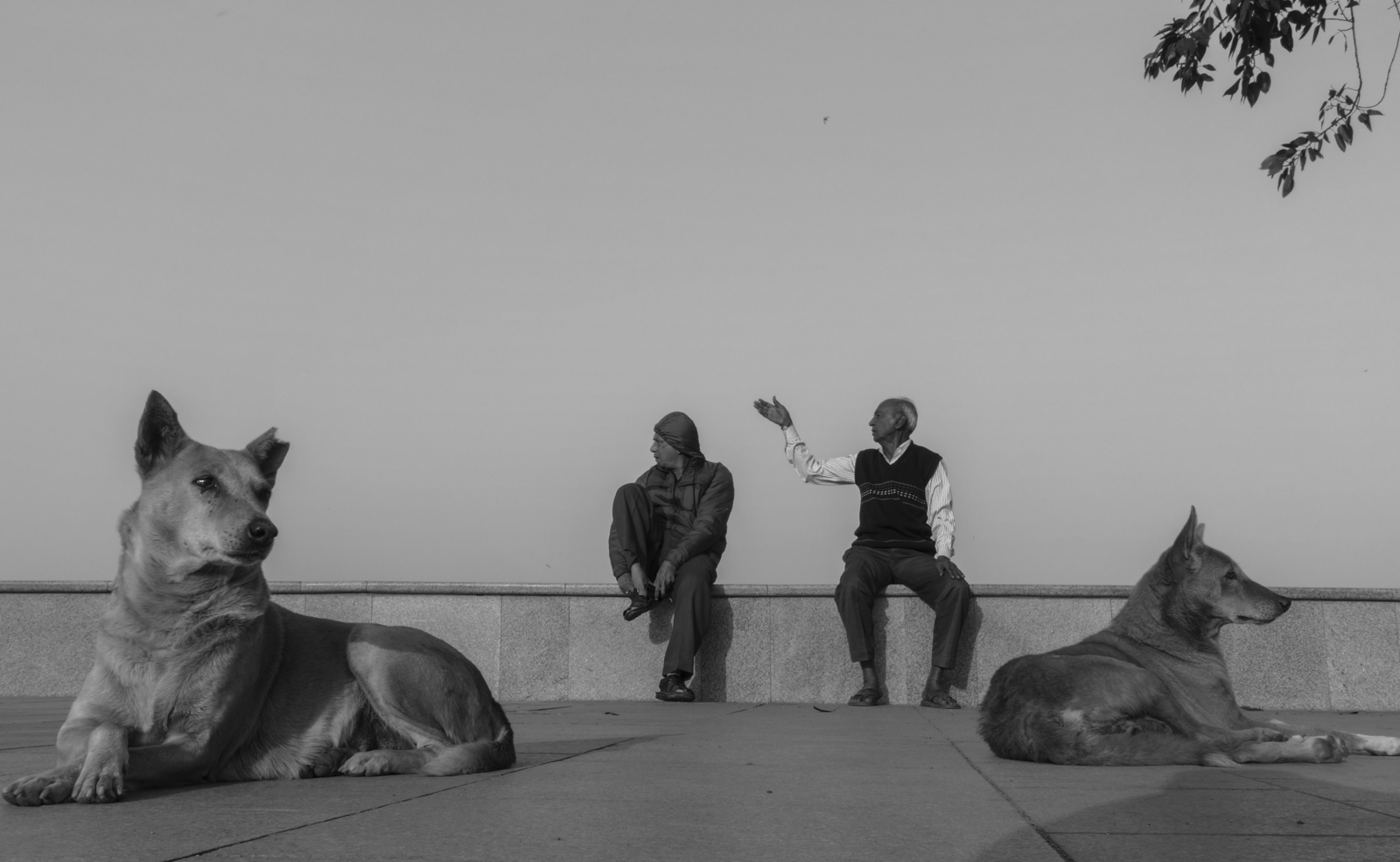 Once again with the start of the day, my feet began their journey on the streets. I love these mornings as they are full of energy. Across the lanes, dogs witnessed my lens passing by. Day in and day out they reside there. Yes, right there on the pavement, the walkways, on the side of the street. They watch humans move around and react to the activity in their own manner. For dogs, the street is a routine. Each day’s activities and reactions surround them. They are so very connected, yet aloof. They respect our privacy. In their own space of land, they are in a rhythm. The rhythm of life. Nature and Life move hand in hand.

This photo series is all about, and was inspired by, the dogs of my neighbourhood. These are street side animals. During the last 6 to 12 months, I took an (almost) daily walk along the morning streets or lake side to find frames involving this creature. It was an amazing experience. Initially, I feared them, as they are untrained street creatures. But eventually, I learned to make my own space around them using caution and eye contact with them. I feel street photography is all about responding spontaneously to things happening around, so you have to be quick and aware about things occurring. With dogs as my subject, I have to be safe as well.

I’d like to share my project, image by image, along with the technical aspects. The first image pictures a dog scratching its head with a man jogging in the background and a couple discussing something.  I used a Sony Rx100 Mark III with the following settings: f-stop 10, shutter speed 1/160, iso 400. I shot this frame early in the morning around 8 am, with auto white balance and without flash. As I saw the dog sitting there, I sat down and held the camera just 4 to 5 inches from ground level to see some elements around. The moment happened when dog was scratching for a minute or two and the man just came behind the head as if popping out. I chose this image as the leading image for the series because it is a story of movement and this frame contains many moving elements. 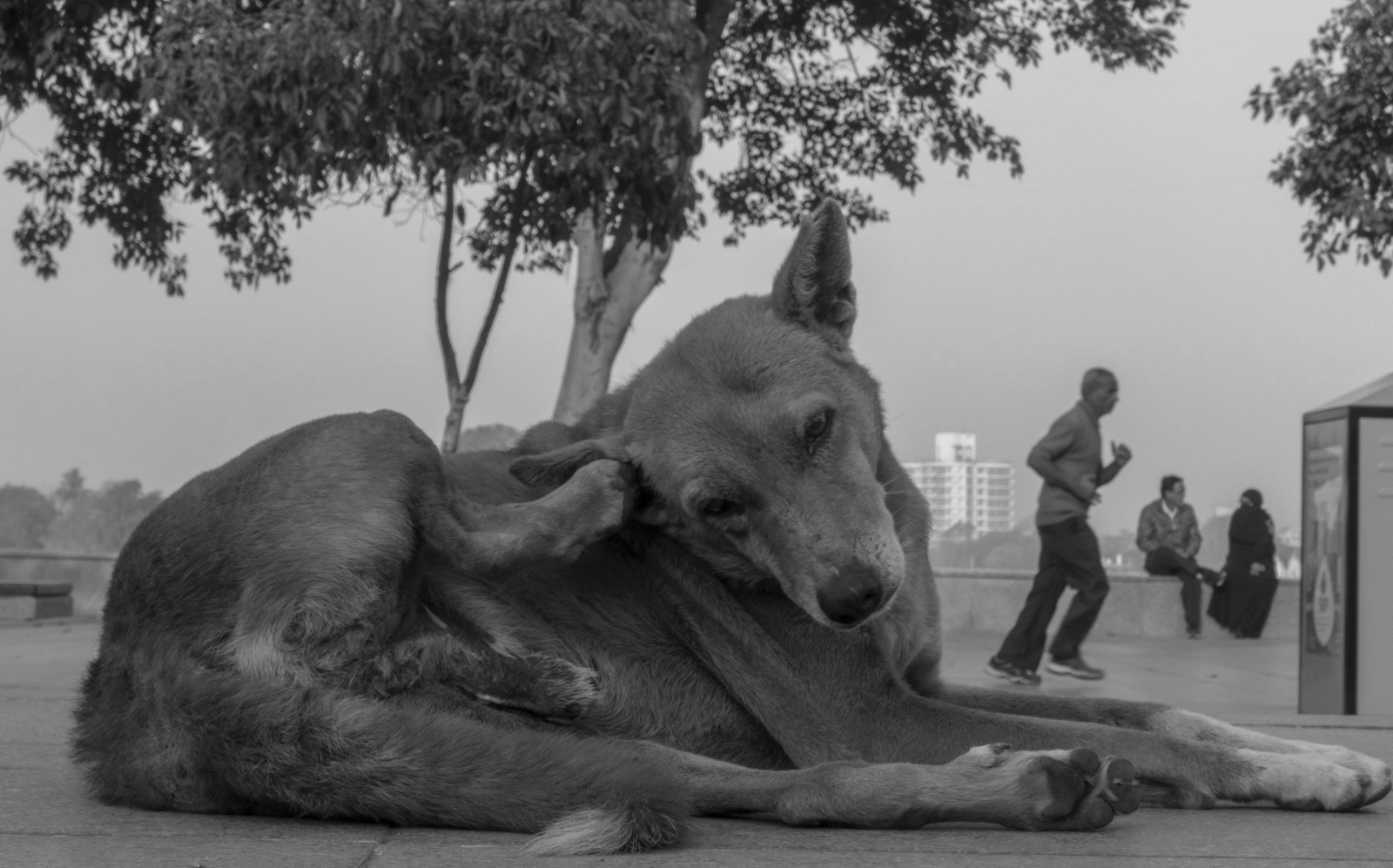 In my second image, it looks as if the dog’s casual gaze looks towards the camera. It was a cloudy morning, and people walking by added more drama to the scene. Here too, I used the Sony Rx100 Mark III early in the morning with f-stop 9, shutter speed 1/160, iso 125, auto white balance and no flash fired. It took patience to make this shot, since I had to wait until the people actually made a connection to the backdrop of clouds and grey floor. 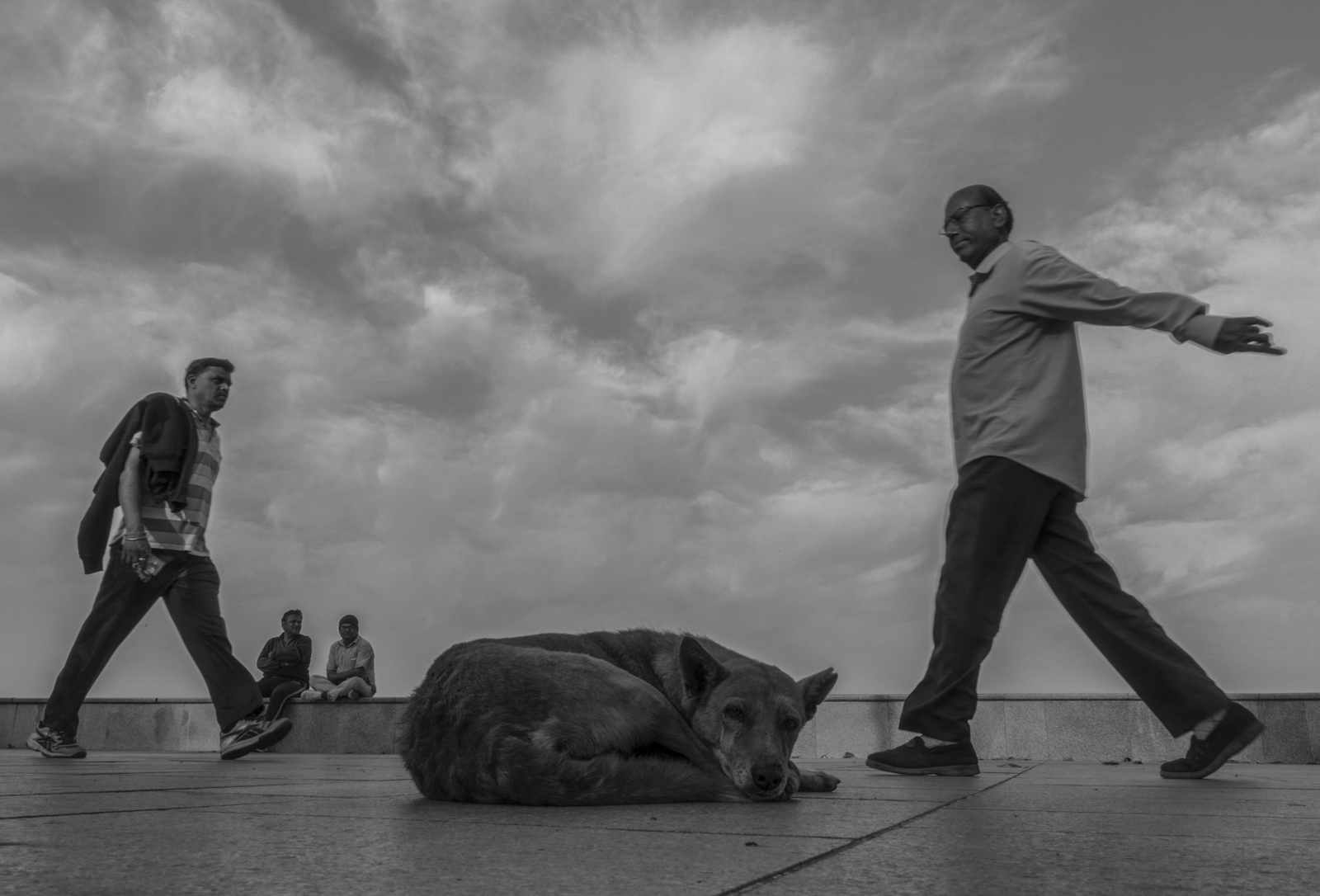 The third image is an afternoon shot. There was a kid playing around the staircase. A closed gate added a geometrical element to the staircase and was disrupted by the shape of the kid with his hands in air. Suddenly, the dog came and bent itself in the frame. The technical aspects – I used a Canon EOS 1100D set at f-stop 10, shutter speed 1/400, iso 100, auto white balance and no flash. 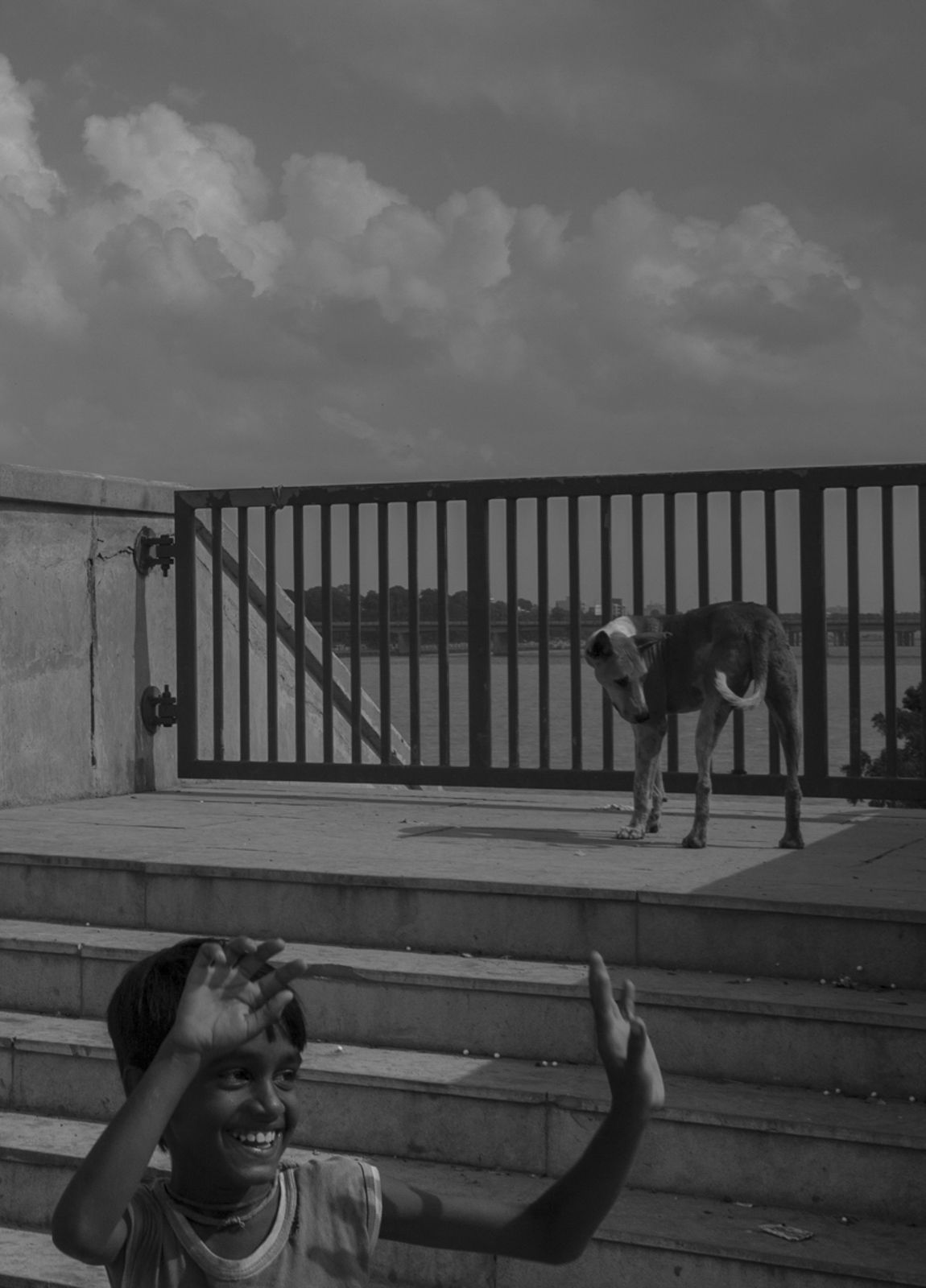 The next image captured a strong emotional reaction of a dog who was disturbed by the walkers passing by. I was sitting at a bench and this happened just 2 or 3 feet from the lens. I was taken aback for a moment with a loud noise but then that was the picture. As for the technical aspects – I used my Sony Rx100 Mark III, f-stop 9, shutter speed 1/200, iso 400, auto white balance and no flash fired. 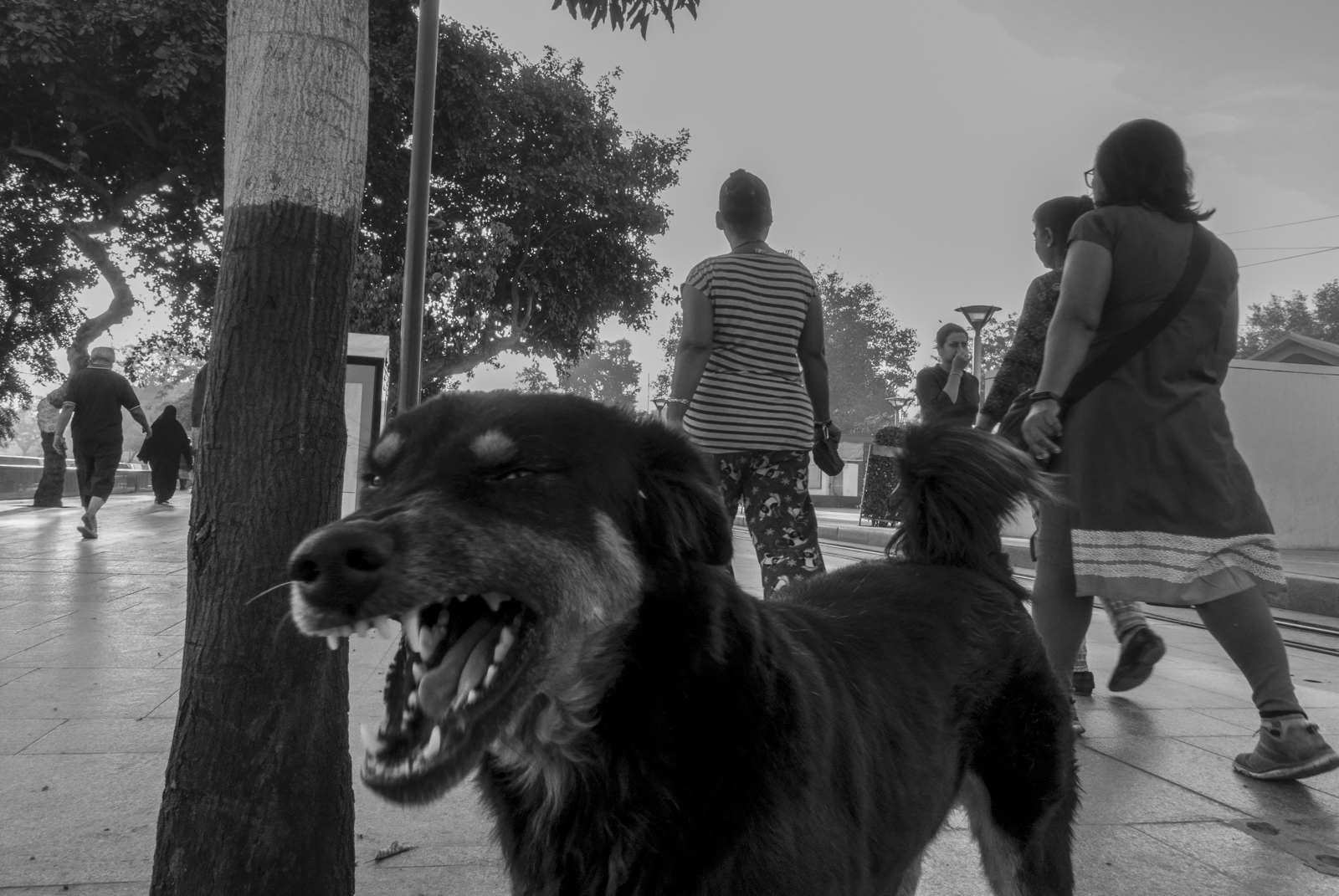 The fifth picture in the series is of shelter inside an auto rickshaw. Here in this part of India, auto rickshaws work like cabs for local transport. Most of the auto rickshaws are decorated with posters of Bollywood celebrities. The dog was sitting inside one of the street side parked vehicles and curiously peeped out. As I saw it moving its legs with the poster in the background I felt like the dog was interacting with the poster of the lady. For this one, I used a Nikon D750 set to f-stop 5.6, shutter speed 1/90, iso 2200, auto white balance and without flash. 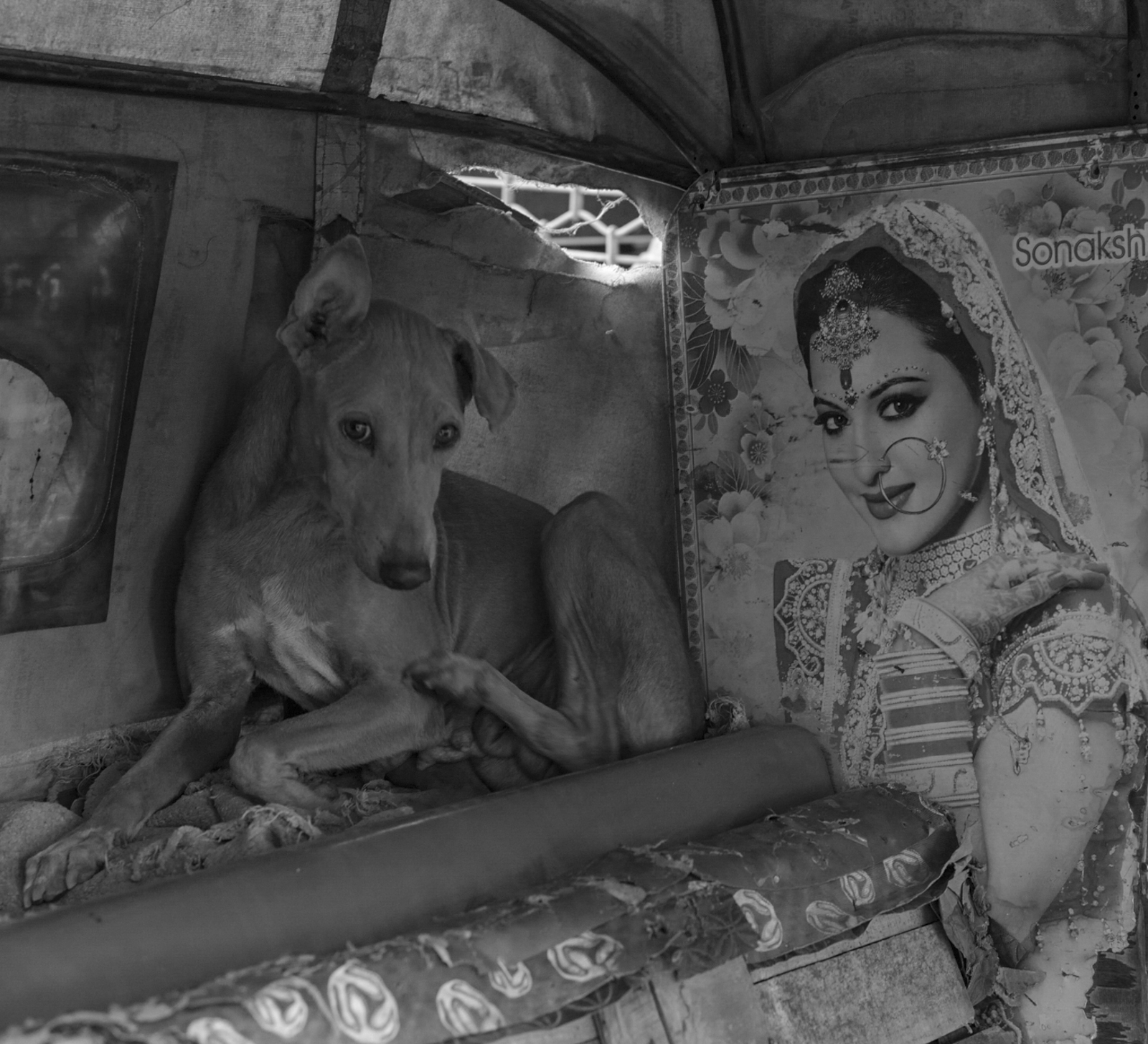 The next one is a kind of prayer to the skies or almighty. The dog is looking up with a full stretch and clouds gather around as if he was praying for a downpour after a hot summer. Life is like that, we ask and pray for relief after the greatest struggle. I was waiting for the dog to move and it did a full stretch just another dog entered the frame from behind. This frame was captured with my Sony Rx100 Mark III, set to f-stop 9, shutter speed 1/160, iso 125, auto white balance and no flash. 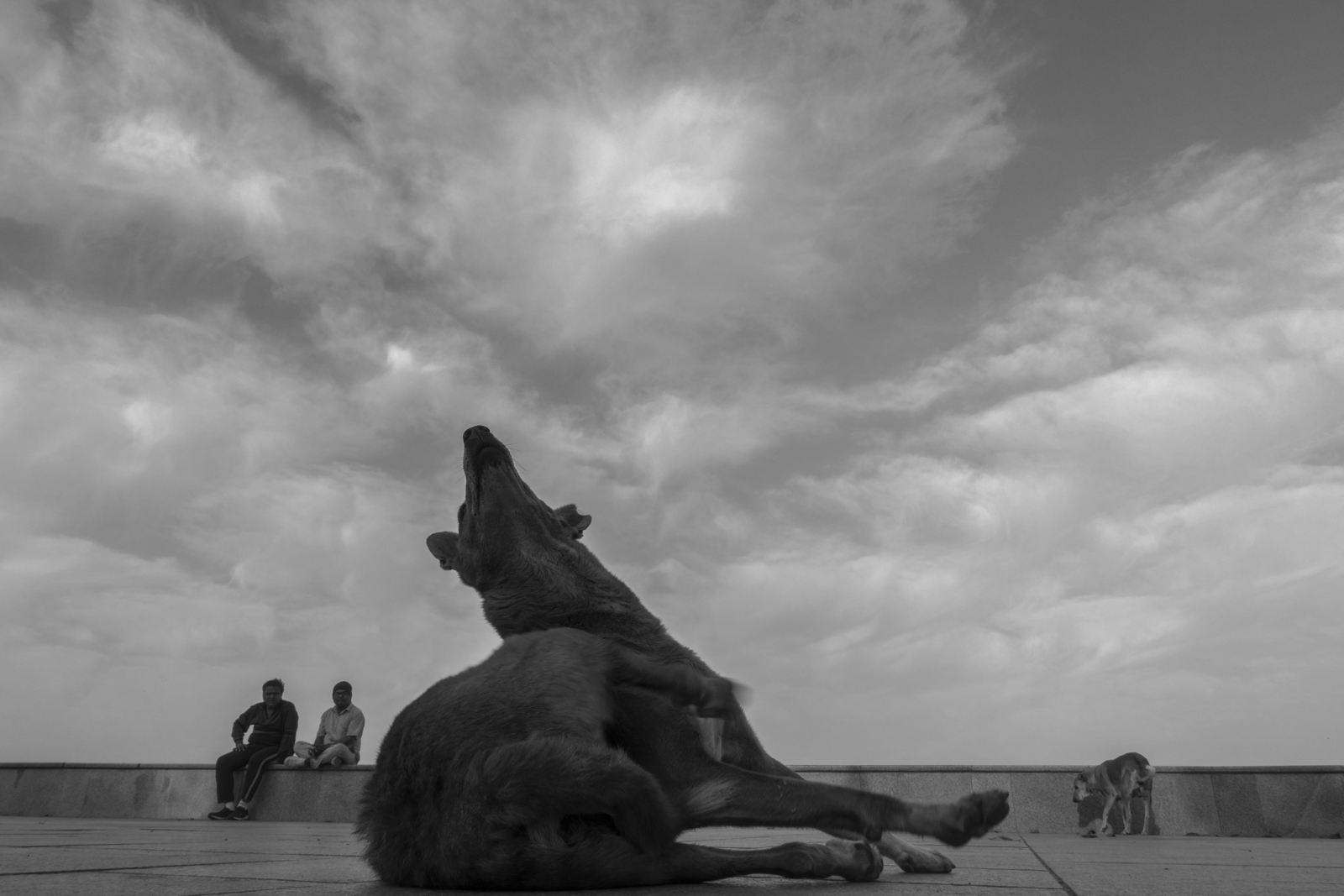 The seventh image in the series can be seen at the top of this article. It features two dogs sitting side by side and two men talking. Here, there are two different worlds. In dog’s world talking all the time is not important. Dogs share a space unmoving, yet they interact a lot. They make gestures to put each other at comfort in their own space. We, people, tend to feel that the closer the proximity, the more talk should be delivered. I was just at the ground level and the two men started discussing something while both the dogs sat nearby, creating lines leading to the men. The dog’s turning of its face was the game changer here. I used my Sony Rx100 Mark III, set at f-stop 9, shutter speed 1/160, iso 125, auto white balance and no flash was fired.

The last of the series is a kind of “Dream of the Dog.” The clouds patterned in the distance are similar to the various roads the dog travelled across during the day. Perhaps the dog is dreaming of an early morning start to a fresh day along the street. The landscape and the resting dog seemed to me as if it depicted the dreamy world of the dog. For this one, I used a Sony Rx100 Mark III, f-stop 10, shutter speed 1/250, iso 250, auto white balance and no flash. 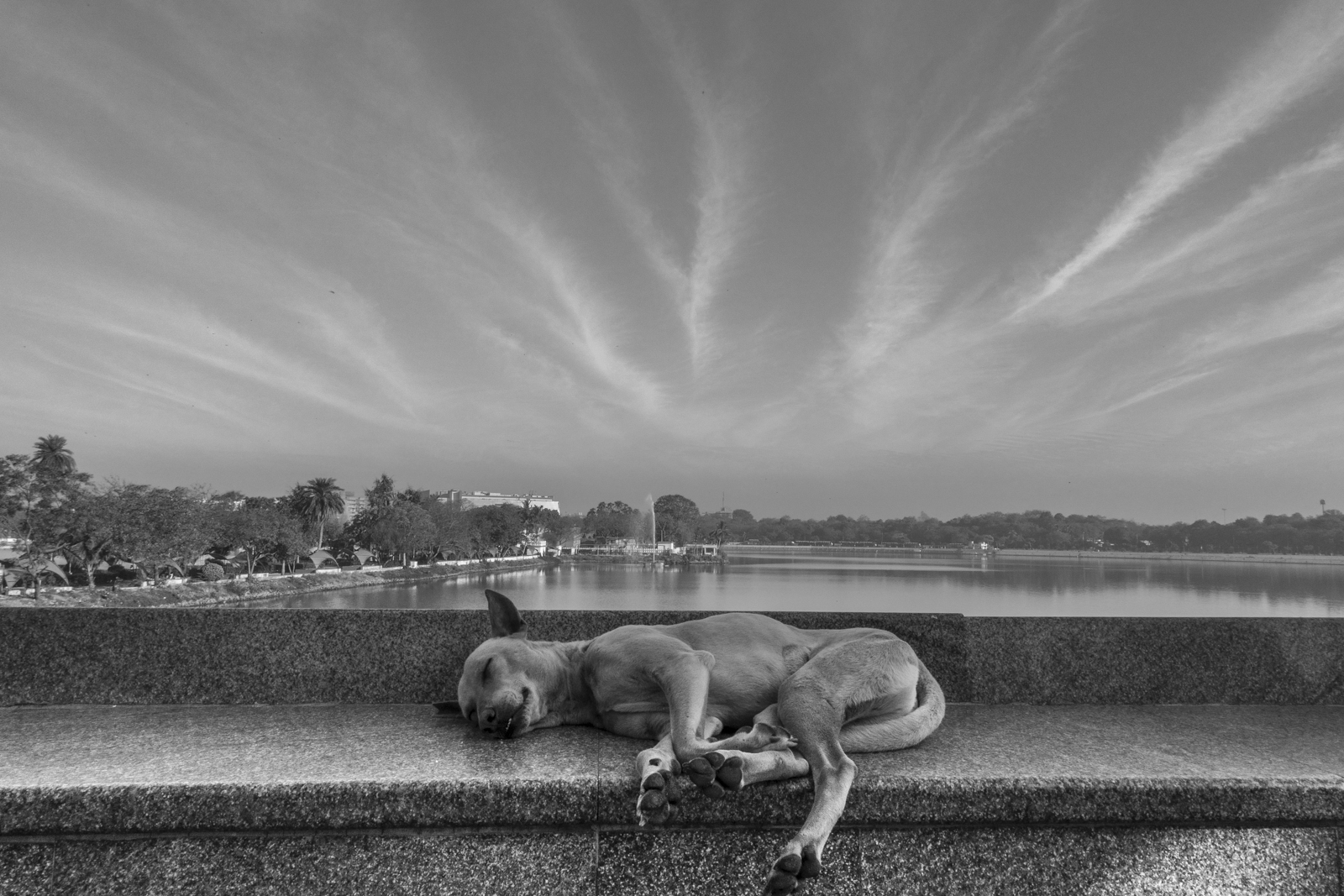 As a street photography, the street is my routine. I took each of these images at different points in time and then I created a series to make up a story. I chose to do this series in monochrome, or black and white, because in my opinion, the life of a street dog is a timeless thing – something that has always been, and always will be, a part of city streets around the world.