How to travel and edit on the road 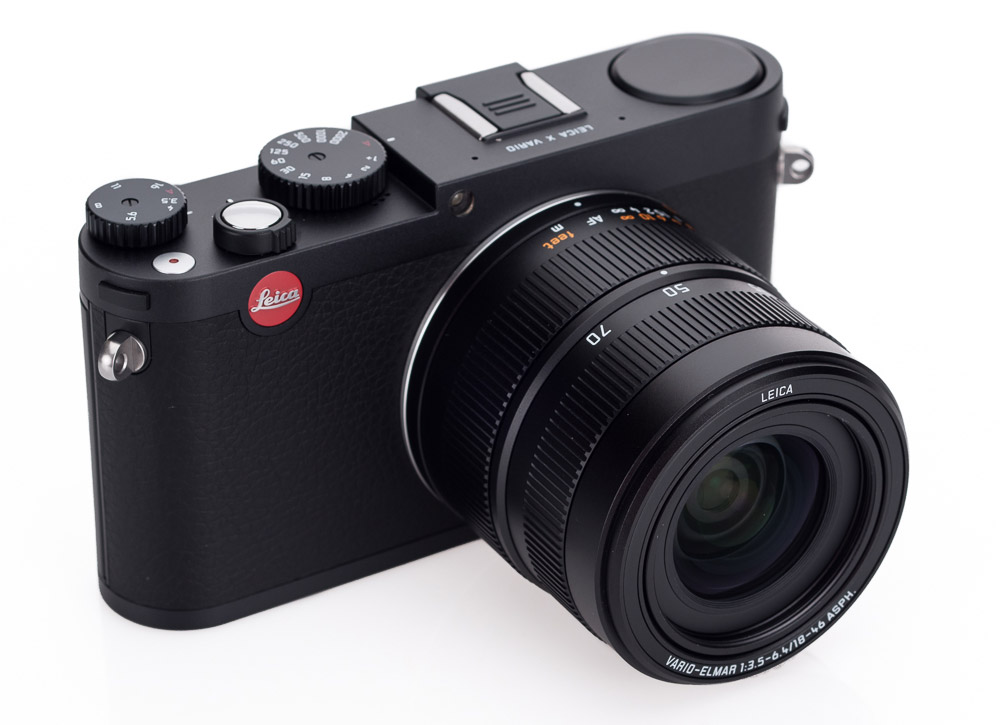 In the last couple of months I have written a lot about my new Leica X Vario camera. I have sung its praises and also noted some of the issues it has that need to be addressed by Leica. All in all, I think it is a great camera that produces stellar files. If you want to read my comments on it you can find them elsewhere on my blog.

Now that I have had it for a couple of months, and shot quite a few frames, I would like to address its use as a camera for street photography. I just spent 2.5 days at a Leica Akadamie Street Photography Weekend in Washington D.C. where I used the X Vario exclusively. Most of the people attending the class were using Leica M’s. I was the only one with the X Vario. I took a step of faith and did not bring a back-up camera as I was trusting that the X Vario would perform consistently throughout the weekend, which it did. 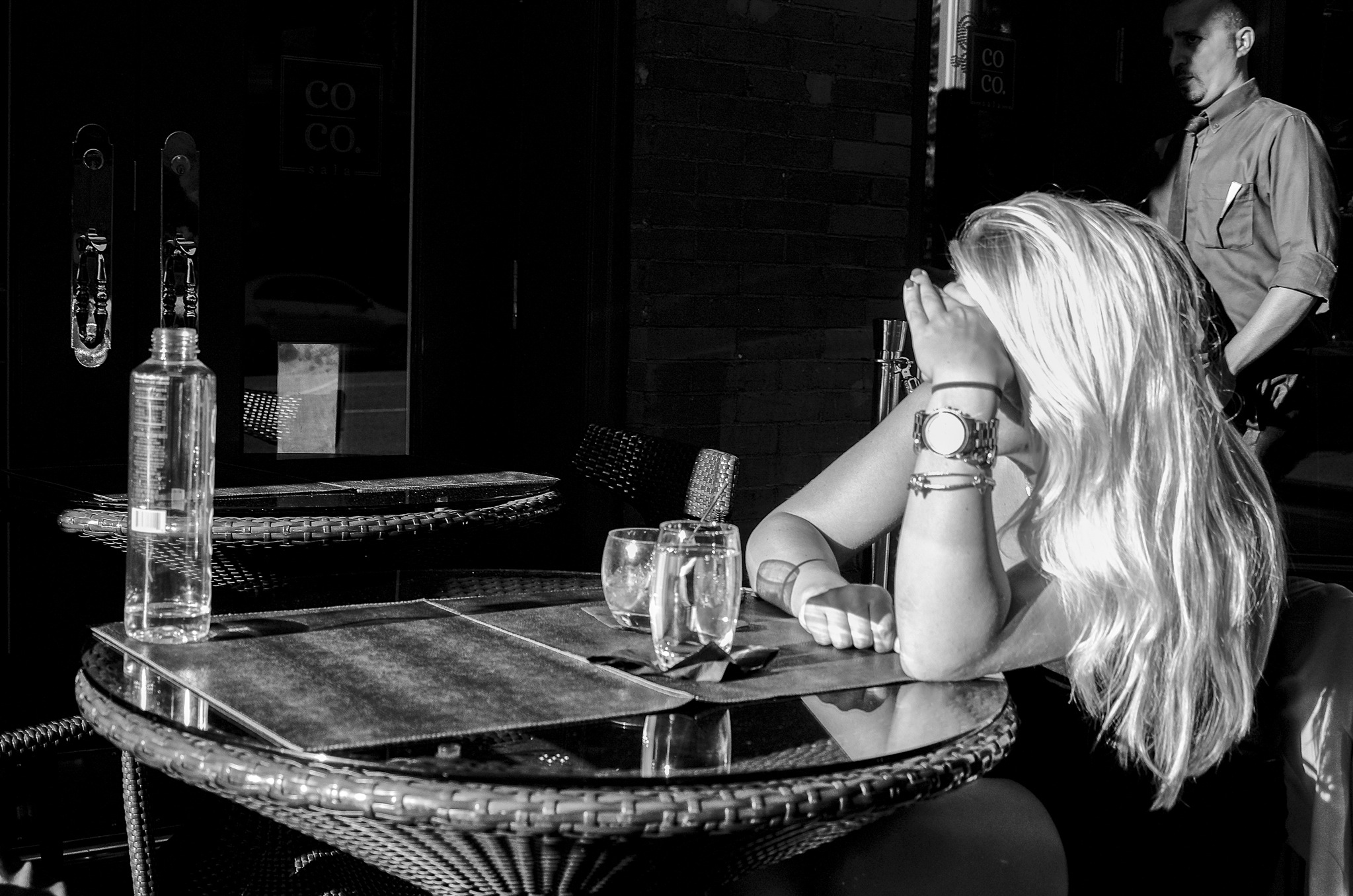 As a street camera one of the things I appreciate about the X Vario is that most of the settings can be done before I walk out the door or the camera is turned on. Aperture- check. Aperture priority or shutter speed- check. Focal length- check. Auto or manual focus- check. I have a default preset that I have developed in camera so I don’t have to set anything, including ISO initially, when I begin shooting. Turn it on, pick single frame or continuous and off I go. By the way I usually shoot in single frame. I don’t “run and gun” anymore. Now back to the class . . .

After few hours of class time we began shooting Friday evening about 6:30 p.m. It was Golden Hour and the light was fantastic. Typically when I shoot on the street I begin at 400 ISO with an f-stop of f/8 or so. I adjust from there depending on if I am in sunlight or shadows. On the X Vario I use aperture priority with auto focus most of the time. If I was shooting from 10 feet to infinity I could easily move from auto to manual focus so I didn’t have to wait for the camera to focus. I could shoot instantly. As the night progressed I found myself shooting at 1600 ISO and higher without any problem. At the end of our official time we stopped at a restaurant which had a basement. It was dimly lit and I was getting clear, handheld pictures at 6400 ISO. Yes, I said 6400. This camera does produce some amazing files which I will show later. 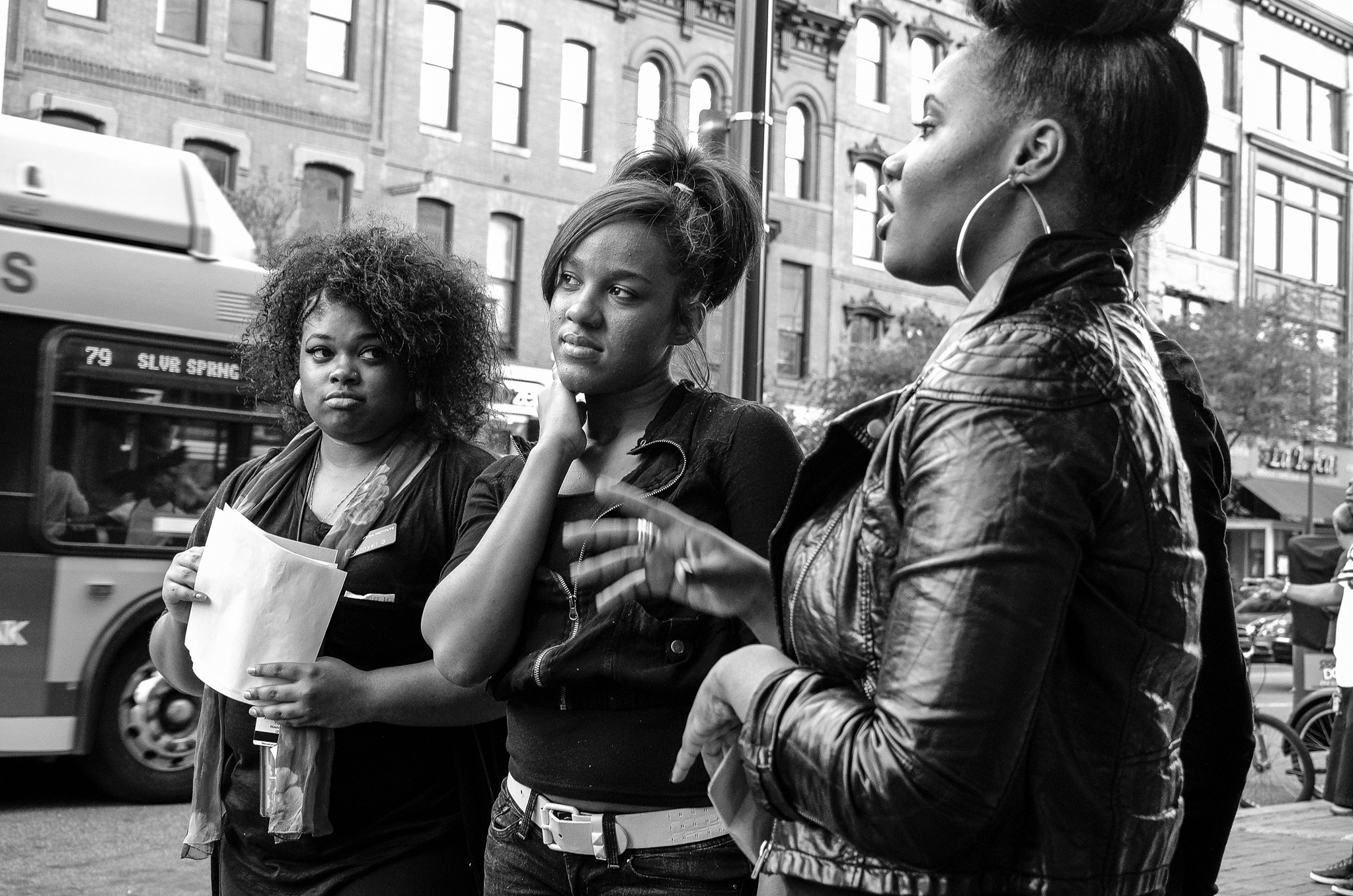 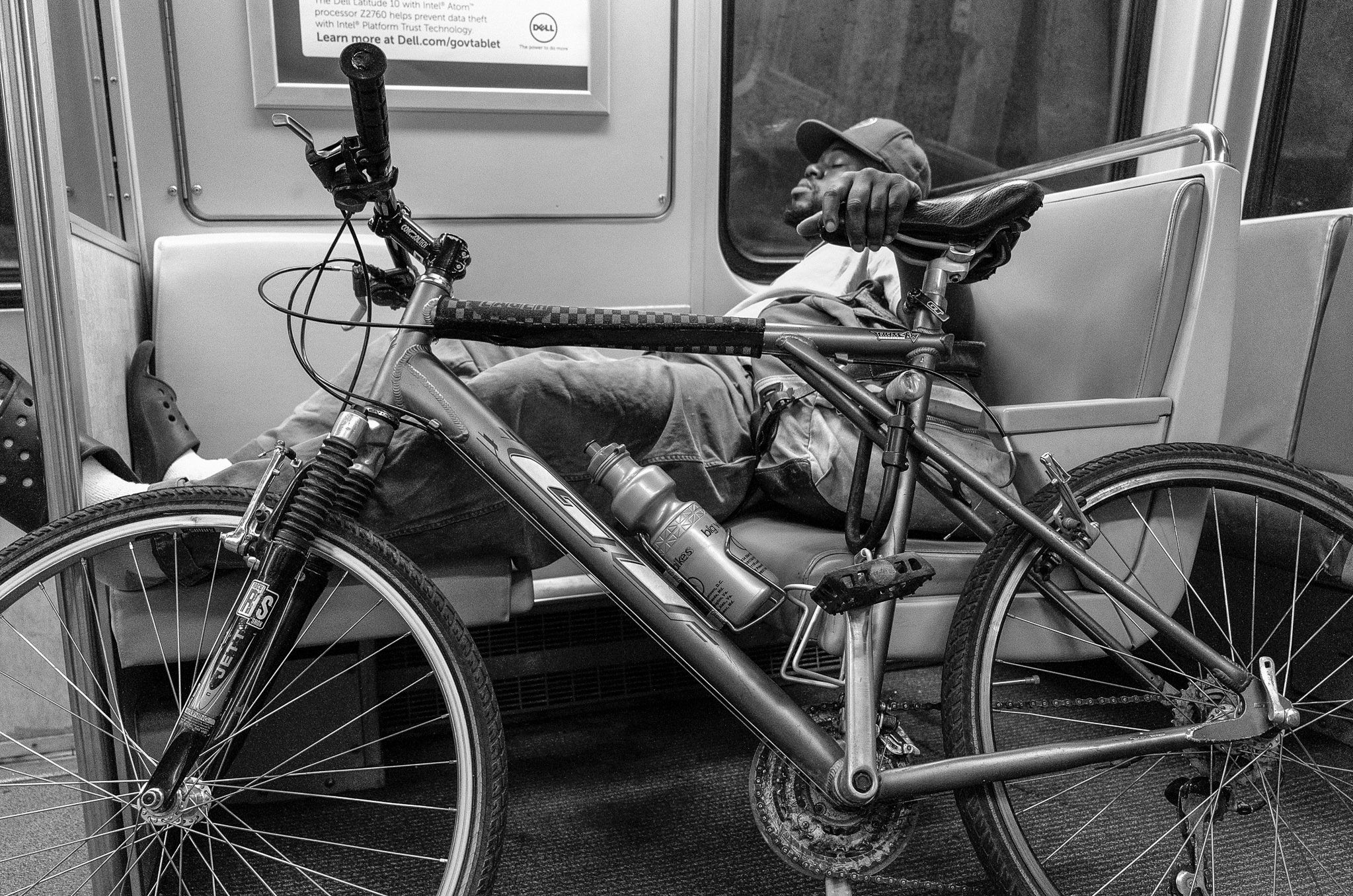 My technique for street photography is to hang my camera with a Dsptch strap around my neck tourist style. It rests on my navel which is where I tend to shoot from most of the time. I can quickly chimp between shots by looking at the LCD, which is clear and bright on the X Vario, and zoom in or out to get the pic framed the way I want. It does take some practice but it is effective. One of the best things about this camera is that it can be set up to be completely silent. I can be talking to someone three feet away and be taking their picture at the same time without them knowing it. I love this about the X Vario. It has the ability to be very “stealthy.” In fact, when the class was reviewing my photos, as they were projected on a screen, more than once someone asked if I was taking the picture of the person while I was talking to them. When I answered “yes,” they were surprised as that is impossible to do with many cameras without the person knowing. 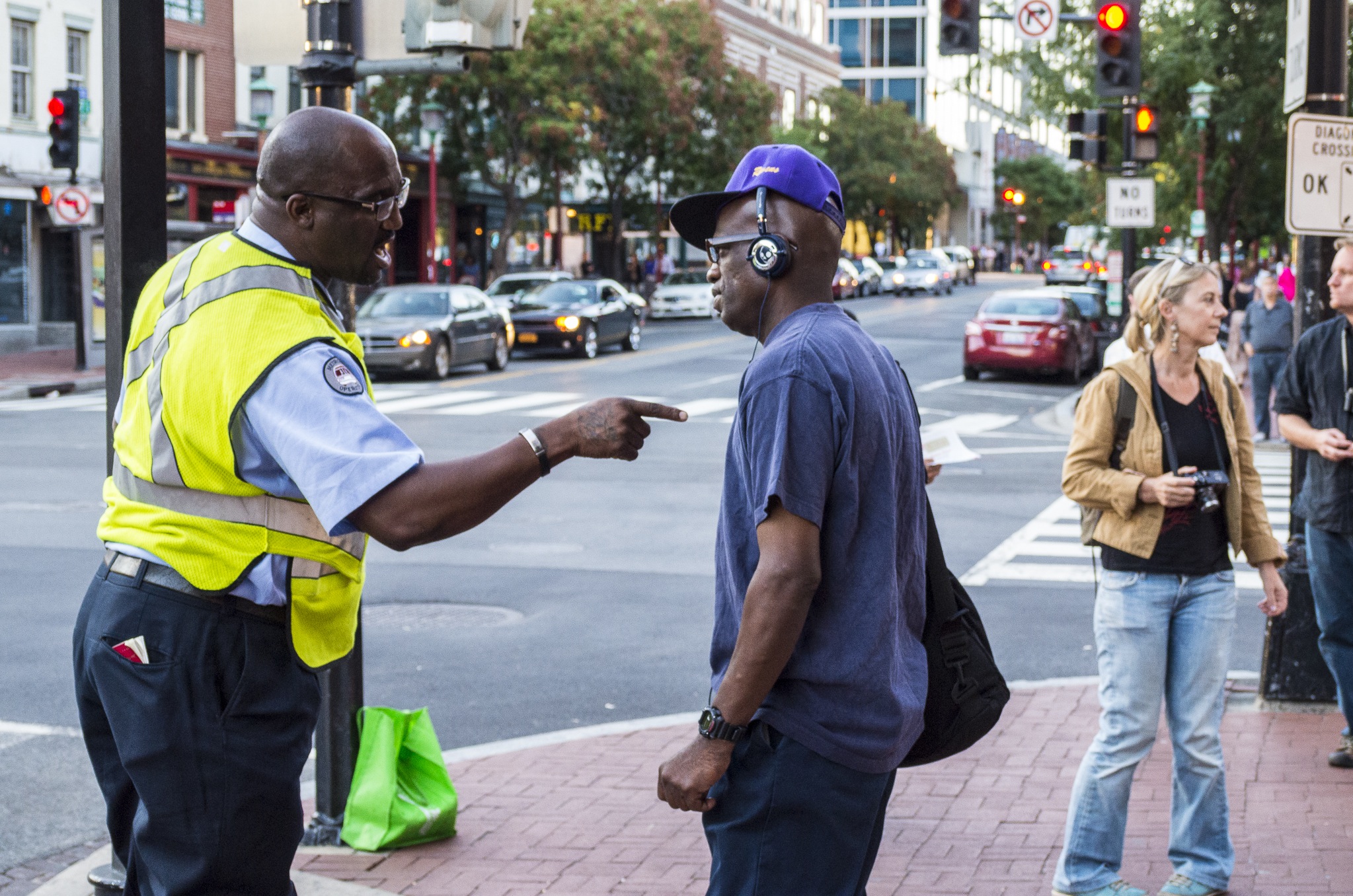 For me this is one of the best things about this camera. Personally, I much prefer a candid street photo. I am looking for a “genuine moment” not a “posed moment.” When you ask someone to take their pic they don’t usually look as they did when you approached them because they are aware they are having their picture taken. I rarely interact with people on the street, before I take their picture, as I am taking their picture because of what they are doing and the way they look. I want a candid shot, not a posed shot. With the X Vario this is easily accomplished.

Concerning this, during the weekend one of my assignments was to approach someone to ask if I could take their picture. I was at the Eastern Market and walked by a woman who had a booth where she was selling some items. She had beautiful blue eyes. After walking by the booth at least three times I stopped and asked if I could take her picture. I explained that I was taking a class and that this was one of my assignments. She was very nice and said, “Yes.” The problem was now that she knew I was taking her pic she never looked as she did when I had walked by earlier. She kept talking and smiling. The pic came out okay but it was not as candid as I would have liked. 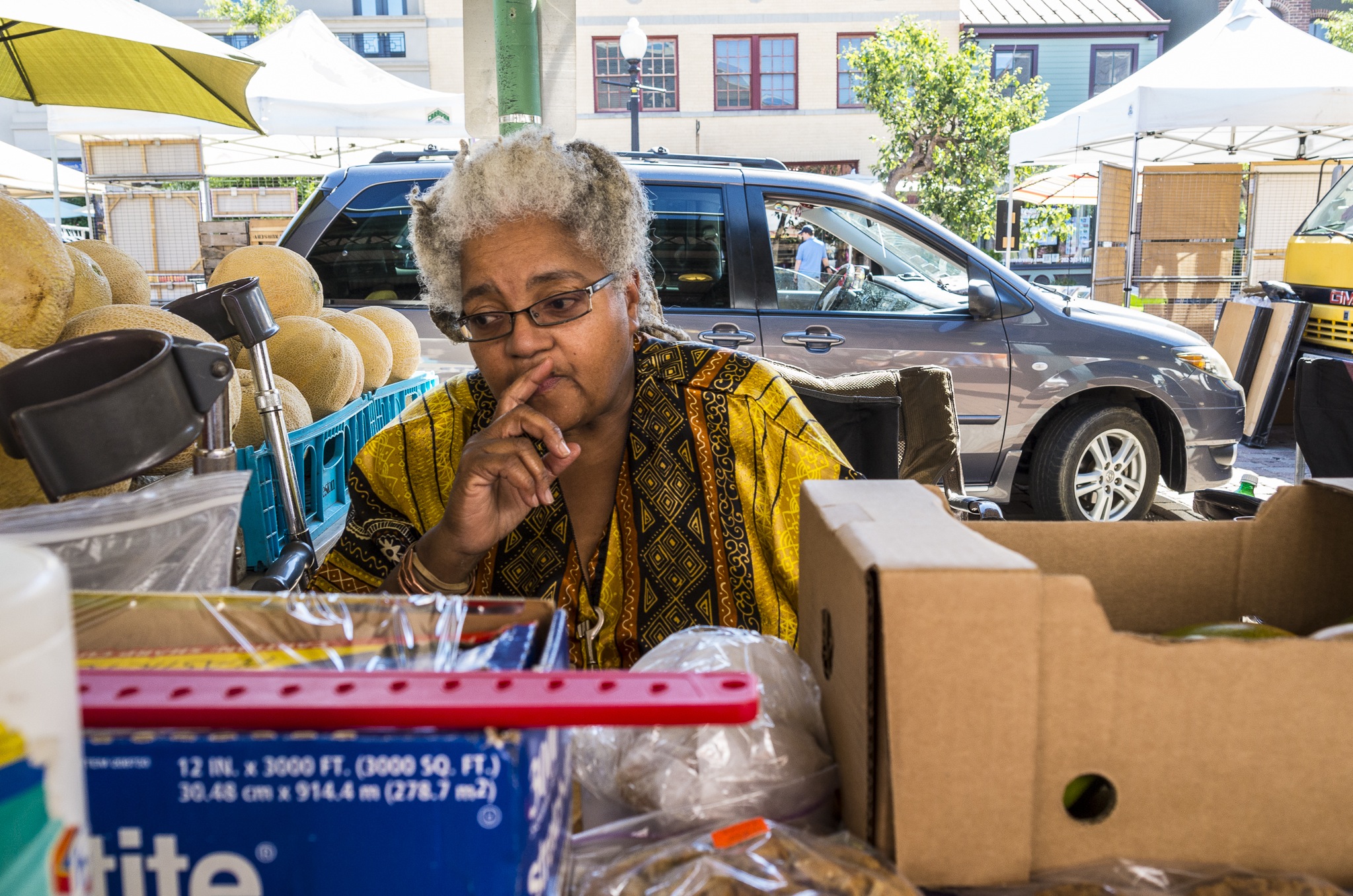 When I shoot I have the Olympus VF-2 EVF on the camera too. I switch back and forth between the EVF and LCD depending on what I am shooting. This is where my struggle begins as after taking a pic there is a lag. The pic shows in the EVF or on the LCD for a moment, even with the Auto Review off. I can’t continue shooting until the pic goes away. I have tried different settings and techniques but I cannot get the X Vario to shoot one picture after another without the lag. For me this is probably the biggest complaint I have with this camera. Why can’t it perform as most cameras do? I usually shoot single frame on the street and would love to be able to continue shooting without waiting. Leica, are you listening?

I am pleased with the battery life as I can easily get over 300 frames per battery. I always buy the manufacture’s battery as I have had bad experiences with aftermarket batteries. Why would I want to put a $5.00 battery in a $3000 camera? It just doesn’t make sense to me. Neither does trying to skimp on a lens hood that may or may not vignette. Spend $100 on the Leica hood and you won’t have any problems. It will look great and function as it was designed to. By the way, when I went to the weekend class I brought my charger and 5 batteries. I only used 3 and only once was the battery in the red, ready to die.

Some of you may be wondering what I carry when I am on the street. Typically, I have the X Vario outfitted with a Leica grip and lens hood. I use the Olympus VF-2 EVF and a Dsptch neck strap. Sometimes I bring along a very small Lowepro bag, the Event Messenger 100, depending on how long I plan on shooting. If I am going to be shooting for a few hours I have extra batteries with me and Sandisk Extreme or Extreme Pro SD cards. 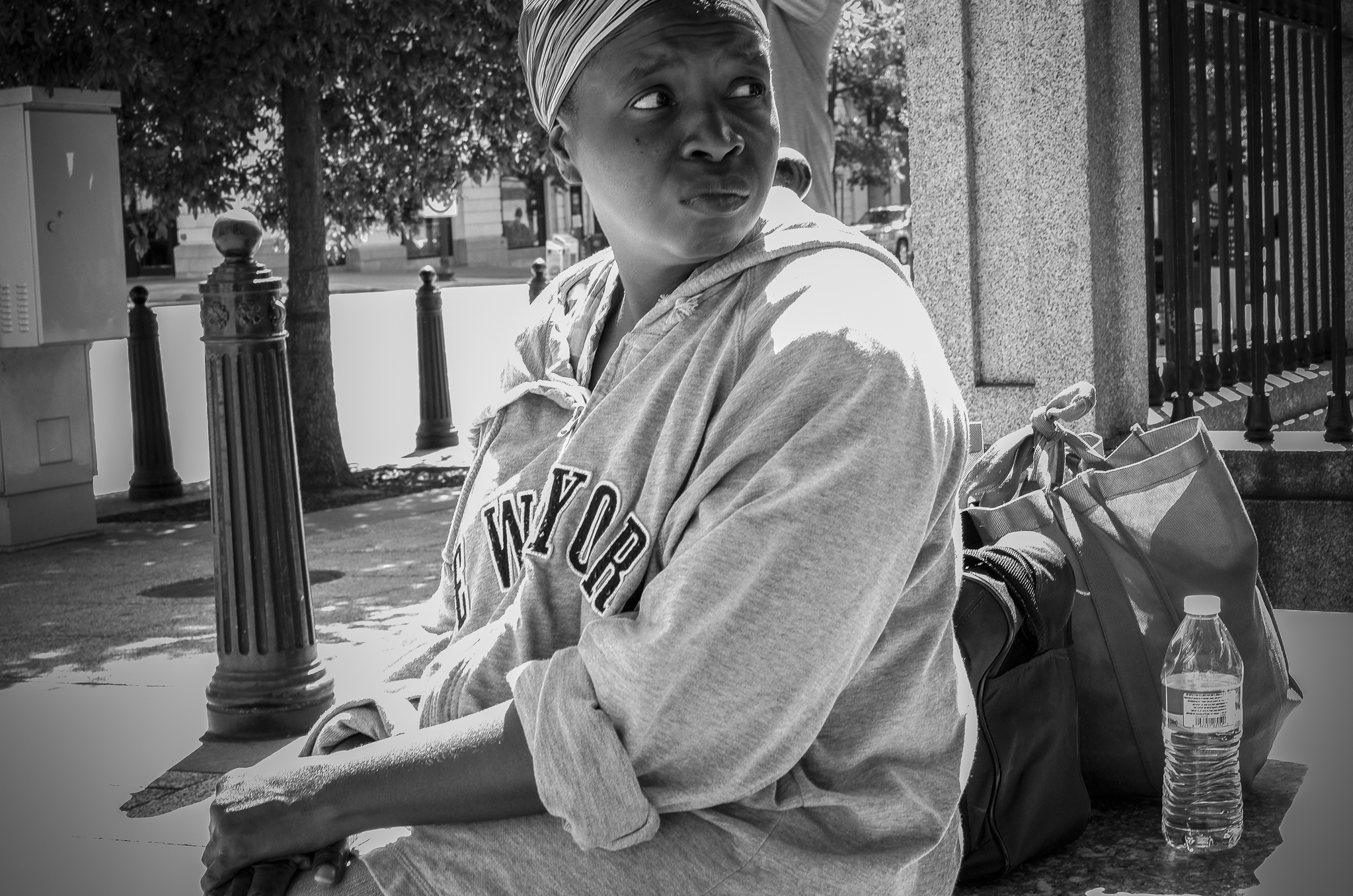 As an aside, one of the things I just discovered is that I like the manual assist off on the camera. If it is off it focuses more like a DSLR when trying to manually focus the lens. For me this works much better.

So, with all of this being said, how does the X Vario work as a street camera? I think it works really well. It is easy to use, produces great files, produces nice pics at high ISO’s and is so small and light that it doesn’t bother me if I am carrying it for hours. Battery life is good and the camera itself is unobtrusive.

I would have said it works “great” but the lag between files really is bothersome. Someone suggested I shoot using continuous mode but I don’t want all of the extra files that I will end up deleting in post production. Leica, please do something about this. I am sure it can be corrected with a firmware update.

In conclusion, here is how I decide how good a particular camera is. We have all been there I am sure. If it was stolen, would I replace it? The answer is a resounding “Yes!” I am fortunate enough to own the Leica X1, X2, M6, M8 and the X Vario. I bought it about two months ago and haven’t touched the other cameras since.

Where to See Vic’s Work