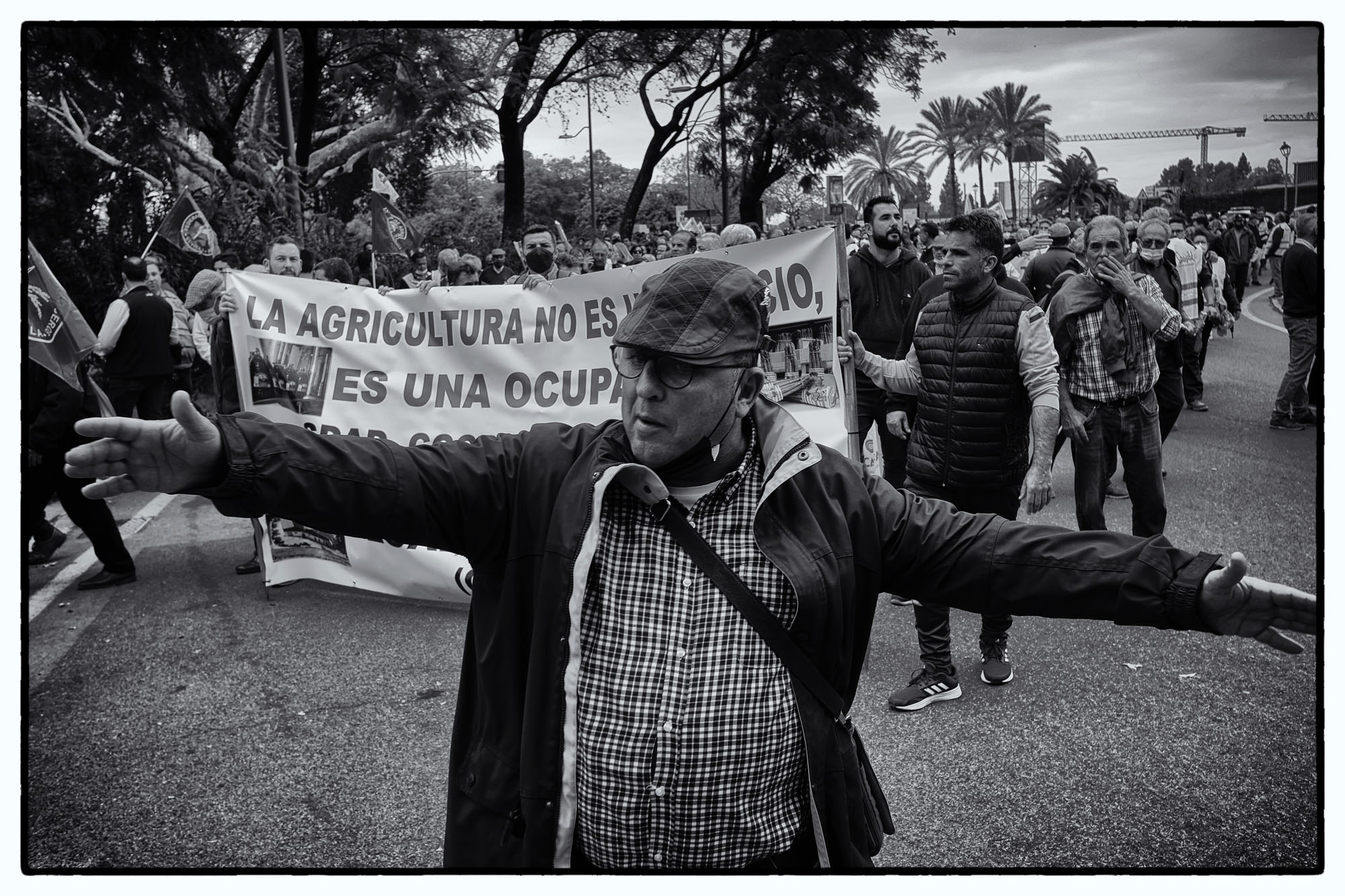 Street Andalucía captures the intriguing ground between ‘found’ portraiture* and street photography.  Somewhere in this middle ground are stories told in faces, gestures, movement and stillness. These images show the deep connection of the people to their environment in a part of Spain which is intoxicating, captivating, full of light and with an abundance of stories for the photographer.

Seville in particular and Andalucía in general present intricately woven patterns of stone, brick, tar and tile, as rich settings for these stories.  Light and dark emphasize and reduce space while perspective offered by narrow street backgrounds serves to place these individuals front and centre of their environment. If there is a darker thread running through this series, it is that of mortality, anonymity, and annihilation against these urban backgrounds. The photographs show this as an underlying theme and the descriptions below pull on these threads to expose this in the series.

In the top image, a street protester fills the frame and his broad, open gesture serves as a powerful contrast to the dense melee behind him. He holds the width of the frame in his arms and in doing so, there’s a rich composition that suggests protection, submission and appeal.

There is absurdity in a chance encounter between two women and a dog. The dog appears comically featureless so that both it and the woman in the foreground are incongruous in their anonymity.  Only the concerned expression of the second woman gives us a clue to any story in this image.

Mortality is the brewing narrative in the next image and there is comedy somewhere in the interaction between the ‘ghost’ and the shopper – he concerned perhaps but more likely responding to the shock of the everyday macabre. The image on the stallholder’s sweater, his mysterious merchandise, and his concealed position raises questions about the nature of his occupation, and gives comic juxtaposition to the two figures.

A man with a paper bag, a neatly trimmed beard, hat, and boots is set against a vanishing perspective. He appears dignified yet diminished by both the background and the claustrophobic feel the framed building lends the image. More interesting than the contents of his bag or purse, is his place in this environment. He seems both familiar and at home in his urban landscape, yet also at a loss, permanently displaced and a long way from the familiar.

Echoing the previous image, there is a vanishing perspective, a bag with less mysterious contents, a purse, and the same purposeful journey through the urban landscape. Once again, the narrative is served so well by the city’s layout. The buildings diminish and frame the individual. Another story, but maybe with a more predictable conclusion.

The components making up the next image are mysterious. A guitar, the remains of a glass of beer, and a tightly clutched sandwich form a tragi-comic still life. It is difficult to piece together this story and there seems little concern or interest from the second figure in the image. The absolute stillness of this shot and the detail behind the sleeper is what makes it so intriguing.

The violinist appears to echo the mannequins next to him. Similarly dressed, expression fixed, he appears to challenge the figure pushing the pram. Only he appears animated and alive, grimly determined at his craft yet connected to the anonymous woman by his gaze. His case sits open on the pavement as a challenge and this is a story which will be repeated with each passer by, foretold by the reflections in the window behind him.

The figures in this image make a direct challenge to the viewer. Their story of age-old partnership is told through expression and placement. Their gaze confronts the lens and through this we see a story of unity, wary and defensive of the threat that mortality may soon have on their partnership.

The montage of three images featuring the ‘cloaked man’ is the most intriguing of this series.  The cloak, the bulk, the classically defined features, and the carefully arranged hair, lend a thwarted superhero narrative to these three photos. Appearing from nowhere, sitting, then sprawling, the mystery behind this character struck us both as bizarre and compulsive. The barred, prison-like structure behind him adds to the drama. In the first image, the tree provides partial cover and hints at mysterious intentions. In the second, he is reflective and distant, cross-legged, meditative even. The third sees him inexplicably defeated and lost. The movement from standing, to sitting to sprawling is what gives this set of images such a wide and speculative narrative. For me it is the most powerful of the set and in many ways the most telling in the thread of mortality running through this Andalucía series.

* The notion of ‘found’ portraiture is a phrase I have coined to describe the place where there is a blur between street photography and formal portraiture.  These portraits are like found objects through which artists make three dimensional representations.  We stumble upon them suddenly and without warning. We find them waiting for us, still, and very much a part of the landscape.  Classical portraits in their composition and construct, they are discovered by the street photographer rather than set up.  Like street photography, they are spontaneous with many layers of meaning and narrative but unlike dynamic street photography, there is little or no movement.  Dynamics come from tension between the individual and the lens, and action is told through a glance, an expression, a placed hand, the link with others in the frame,  objects and street furniture. In this series, the image of the old couple is an example of this blur between portraiture and street photography.  It is clear that the couple have not been directed towards the lens but rather the lens has found them. Yet they are still, and confront the lens with awareness and attitude. The dynamism in the shot is being held in the tense space between them and the photographer.

Found portraiture can also be seen in the image of the sleeping man with a sandwich.  Still and unaware of the lens, the elements and objects around him sit as comedic symbols reminiscent of renaissance art, telling a deeper story about the individuals within the frame.  He is found classically placed close to his half consumed  objects as if they are displays echoing the renaissance placing of solid and symbolic representations of his life achievements. However, these objects tell of how he spent the last hour rather than a lifetime.  Discussion on the definition between street photography and found portraiture can be interesting and productive.  Some photographers may feel that the lack of dynamism in found portraiture renders it outside the true definition of street photography, while others would argue that these candid, chance encounters with humanity, embody the very notion of everything that defines street photography.

I am a British photographer working primarily in black and white. My work has been exhibited both internationally and in the UK. My images have been described as intriguing, humorous, quirky and timeless.I’d liketo think that anyone looking at these images comes away with more questions than answers. That’s the beguiling nature of the human stories told by the lens. If you leave feeling intrigued, then my work has had the effect I am after.