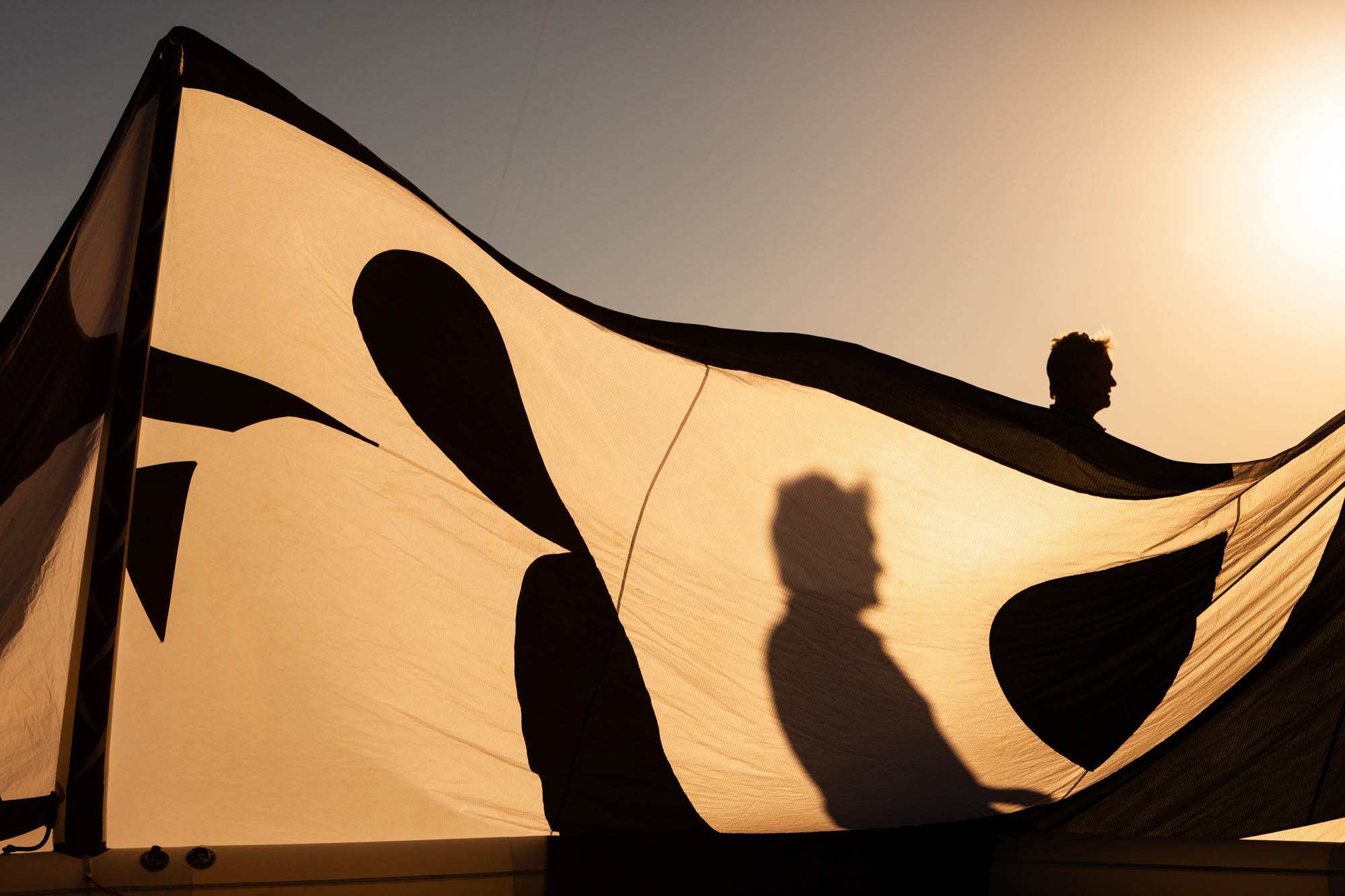 Those who think that the shadow does not survive the body, or is merely a projection of it, should visit Hiroshima and Nagasaki. Each of us is both light and shadow, but it is the latter, counterintuitive as it may seem, that represents the most genuine part of ourselves, because it is what lies deepest within us, the part of us we do not master. The problem then is precisely this: the shadow represents an insurmountable boundary and, like silence, it exists as long as no one speaks, as long as no one explores it, as long as light remains quiet and does not tear it apart.

On the other hand, there would be no shadow without light, and vice versa. The work of entering the shadow is difficult, silent and requires an immense amount of solitude and empathic resilience. With the shadow, in fact, one cannot come to terms. In the Eastern tradition, it is commonplace to play with shadows; all it takes is a well-directed light, a wall, and two skillful hands with which impossible silhouettes can be carved. Playing with shadows is in fact an art that requires mastery, skill, inventiveness and the necessary talent to amaze spectators. For us Westerners, it seems impossible at this point to escape the lure of Plato’s cave myth. Men, stuck in the bottom of a cavity, were incapable of knowing the true nature of reality, having to make do with the shadows cast on the wall. Only the philosopher, able to free himself from the bonds of convention, would venture to the surface to see the real form of nature and reality, and then turn back and try, laboriously, to free the rest of humanity from the shadows.

Many centuries later, the Enlightenment posed a similar problem: to shed light with reason, freeing society’s behavior from false myths. It will be, however, with Freud and his theory of the unconscious Id that, in the West, the problem of the shadow will move from the external and social level, to the inner and individual level, where the knowing Ego must venture into the darkness of the unknown in order to make it knowable, allowing the individual to progressively free himself of his traumas.

But what about shadow play when instead of exercising a skill within a predetermined stage, one tries to recreate the most intimate and profound meaning of humanity through the medium of street photography? What more intimate existential meaning is sought? If to photograph, literally means “to write through light,” the photographer is that particular writer who uses light, and consequently shadow, to recreate in a two-dimensional plane a manifold set of meanings.

Indeed, photography is not limited, when it rises to the levels of art, to reproducing the optical deception of three-dimensional reality; it is not merely representative or documentary. Rather it rises to the level of allegory, sometimes of foreshadowing, that is, it refers to an other, alien, in some cases superior or metaphysical meaning. This is the sense, in my opinion, of Nicola Fioravanti’s work. For him, the historical subjects who pass through the optics of his camera to be captured by the expertly managed sensor are not important in their being unique and unrepeatable persons. Rather, they are masks in a theater of the absurd, reminding us that we are all simultaneously spectators and characters in a play, life, of which no one at birth has ever been given the script.

With his work, Nicola Fioravanti captures this sway between those who seem to know what they do and those who search for a sense of themselves in what they do. Colors, then, are as important as light and shadow. From an anthropological point of view, then, his research work is even more interesting, because rather than capturing scenes of everyday life, which emphasize cultural differences between different and distant contexts, his photography skillfully succeeds in remarking that London, Paris, New York, Rabat always refer to the same play: the shadow is always shadow, the human being, in its deepest sense, is unique but simultaneously interchangeable. To Western egotistical voyeurism this may sound painful and reductive; our superficial individualism suffers. But dust we were, shadow we are, dust we shall return. Not surprisingly, in some shots, perhaps driven by his unconscious, Nicola Fioravanti includes his shadow in the composition.

However scientifically we can prove that shadows obey the simple natural laws of optics, there is something elusive and mysterious about their appearance. They are part of our world, but they appear and disappear from view. They are elusive, fast and changeable. So rapid that only the photographer has an instrument that can arrest all these changes. We always tend to conceive of our world as stable, even though we have an awareness of the variety of circumstances that can affect the appearance of things. With shadows, however, it is different because they are not fully part of the world we consider real. We cannot touch them, grasp them, smell them. So common language is often led to use the metaphor of shadows to describe something unreal, dreamlike.

The ancient Greeks believed that when we move away from the real world, we survive only as a “shadow among shadows.” But today, the more courageous, face this dichotomy and wonder if, by chance, our deepest reality was not that of being merely shadows, mere spectators of the world in which we live. Therefore, Nicola Fioravanti, with his seemingly inhuman work, takes it upon himself to run along this ridge and, with Spectators, explores this creative possibility. The street becomes a shared room, in which the wall is the setting in which each character reveals his or her deepest and most human nature.

The street photographer observes the light, chooses the best hours so that that same light allows him to dig into the shadows, obtaining gradations of gray. This is how light generates its meanings, revealing the essential where the shadow hides its mysteries. One, after all, belongs to the other, in an endless game of cross-references, balances and equilibria. Like a musician reading a score, the street photographer studies the scene and transforms notes into colors, harmonies and vibrations into chromatic compositions traversed by diagonals. Music exists because the notes tear through the silence and feed off it. Photography gains meaning because the white of light and the black of shadow open up to accommodate the infinite hues of colors and shapes.

When he shoots, the street photographer encloses himself in the mysticism of his silence to interpret the visual power of human theater: life flowing unbeknownst to him. Therein lies the beauty and wonder. The equipment is simple and elementary, in addition to the optics to the camera, the street photographer is nevertheless required to have a special talent, the ability to steal with the mere purpose of giving back. That is why, in all of us, they remind us of that mythical type of gentleman thieves, and that is why, when they are as capable as Nicola Fioravanti is, we tend to forgive them the brazenness with which they remind us that our lives, no matter how important they may appear to us, are just an act of which we are mostly unaware spectators.

Marcello Carlotti (PhD) is a cultural anthropologist born and raised in Sardinia, Italy. His scientific interests mainly concern the origins of language, cognitive science and philosophy of mind. After working at Tel Aviv University with Marcelo Dascal, he started conducting research in visual anthropology, filming documentaries on Madagascar and Sardinia, among others. A cycling lover, in his free time he rides many kilometres in the mountains of his homeland.