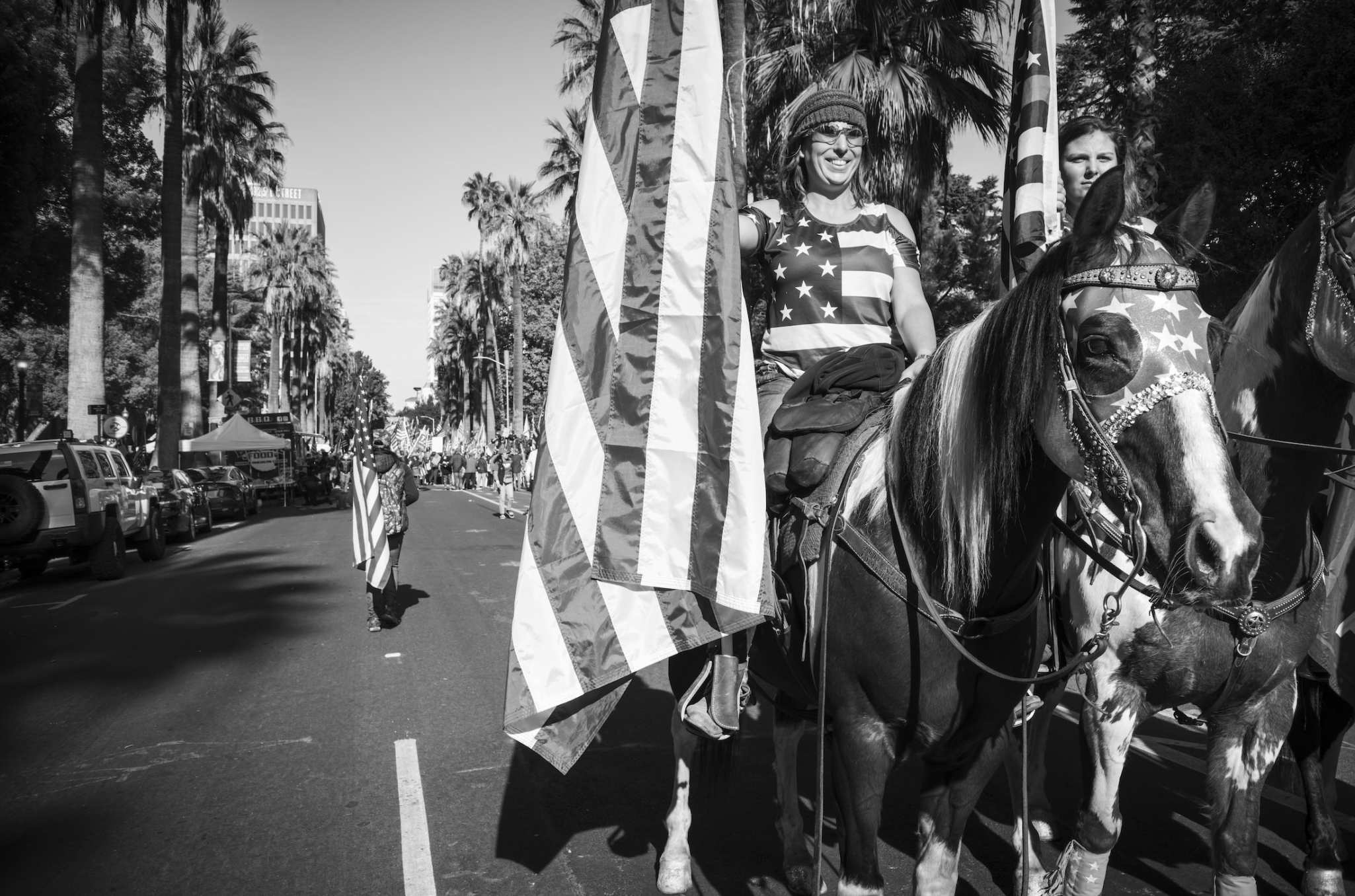 The conflicts of 2020 may have frayed your nerves, but they were good chances to practice controversy as a subject for street photography. If you were socially distancing last year don’t fret that you missed the opportunity: 2021 also seems off to a rocky start. The heightened emotions, colorful graphics, dramatic postures, crowds, and bystanders all contribute to an ideal environment for applying and practicing your street skills.

A few years ago I discovered that my apartment in San Francisco is almost across the street from Dorothea Lange’s old portrait studio. As the Depression dried up the portrait business, Lange got restless and decided to take her camera out into the surrounding neighborhoods to document, among other things, the frequent protests and street demonstrations of that era. Those photographs were her self-education in street photography and began her transition from a commercial photographer to one of America’s great artists. Her famous quote, “see if I can just grab a hunk of lightning,” refers to her goal for shooting San Francisco’s May Day protest in 1933. I imagine Dorothea Lange walking down my street every time I step out the door, camera in hand, en route to a local demonstration. I’m hoping a bit of the learning she found – if not a lightning bolt at least a few sparks – will come my way as I engage with similar photographic challenges.

One lesson to learn from Dorothea Lange is her approach to being inconspicuous in the street. Surrounded by angry, mostly male protesters, it could have been dangerous for a petite woman with a leg damaged by polio to draw too much attention to her actions. Lange explained her tactic of using a neutral facial expression as “an invisible coat that covers me.”  She recalled, “When I was a child and became acquainted with the New York Bowery, a lame little girl walking down that street unprotected was an ordeal. I learned to be unseen at that age and that has stayed with me all my working life.” In addition to assuming Lange’s game face, it’s also a good idea to dress simply, in generic, comfortable clothes that don’t suggest affiliation with any particular cause or profession. You can’t go wrong with jeans and sneakers. Stay calm and focused. Better to capture subjects venting emotions over their cause rather than at you!

Another piece of advice from a legendary street photographer is Robert Capa’s often-quoted admonition: “If your pictures aren’t good enough, you’re not close enough.” I translate this into “leave the long lens at home.” Don’t even tempt yourself with an option to stand on the sidelines and zoom into the action. Take only a wide lens, pluck up your courage, and wade into the fray. The crowd’s passion is energizing and you’ll likely find interesting angles for shots that simply can’t be captured from afar. I like to follow the example of my teacher, the great street photographer Harvey Stein, and carry 35mm and 21mm primes, but a wide zoom works equally well. Public demonstrations are intentionally theatrical. Carrying a camera helps to define the role you wish to play in the drama, that of a documentarian. Similarly, I like to follow the theatre analogy and identify protagonists for my shots. What role do I want him or her to play in the micro-drama that I create in the frame?

The corollary to get close is stay safe. Be diplomatic and know when to disengage. Few pictures are worth the risk of injury or damage to your gear. Always be aware of your surroundings. Trust your gut and retreat if you sense that things are getting too intense. Shortly after I took this shot of a confrontation between a small group of restaurant workers and a security detail in China, a cop gave me a hard shove. I’d been pretty aggressive about sticking my camera right into the action. He provided a clear signal that it was time to step away.

After retreating to the sidelines I looked for different types of shots that gave context and had more storytelling elements. But even if circumstances don’t demand it, be sure to check out the periphery of the scene, where the action blends into the surrounding neighborhood. Among the observers you’ll often find interesting kids, pets, passersby, and bystanders, either reacting to or ignoring the main activity. Sometimes the best street photography opportunities are on the edges rather than at the more crowded and chaotic center. Look not only for echoes of the main event, but also humorous or ironic counterpoints.

Another aspect to staying safe is having an answer when asked why you’re making photos. It’s not an uncommon question for street photographers, but in controversial situations it can be more highly charged, especially if the person asking believes or fears that you represent the other side. I usually say something to the effect of, it’s an important event and I want to make pictures to record it. At a Trump rally at the state capital in Sacramento this fall, a muscular woman with neck tattoos and a Proud Boys t-shirt asked why I was making pictures. She wasn’t satisfied with the stock reply. At that point I’d been shooting for a couple of hours and was getting tired. It felt like the right time to retreat. Stay safe.

Signs are important graphic elements at protests and demonstrations, but don’t use them as the sole source of your storytelling. Exclusively making photos of signs, even the most clever and interesting ones, can get monotonous and risks missing the real prize, shots of people expressing the strong emotions that brought them to the event. So make a point of including a number of sign-free pictures in your selection. Of course shoot the placards, but also challenge yourself to arrange the frame visually, with no left-brain verbal tasks to compete with pure right-brain immersion in the image. As Elliott Erwitt observed, “The whole point of taking pictures is so that you don’t have to explain things with words.”

Protests, demonstrations, and rallies are part of the friction society experiences from the continual process of social evolution. Change can be uncomfortable, so emotions are often high, creating ideal conditions for street photography. If you haven’t tried your hand yet at shooting controversy, this year seems likely to provide a wealth of opportunities. At the least you can sharpen your skills in a fast-paced environment, and you may well end up documenting important historical events. Grab your favorite wide-angle lens and give it a try!