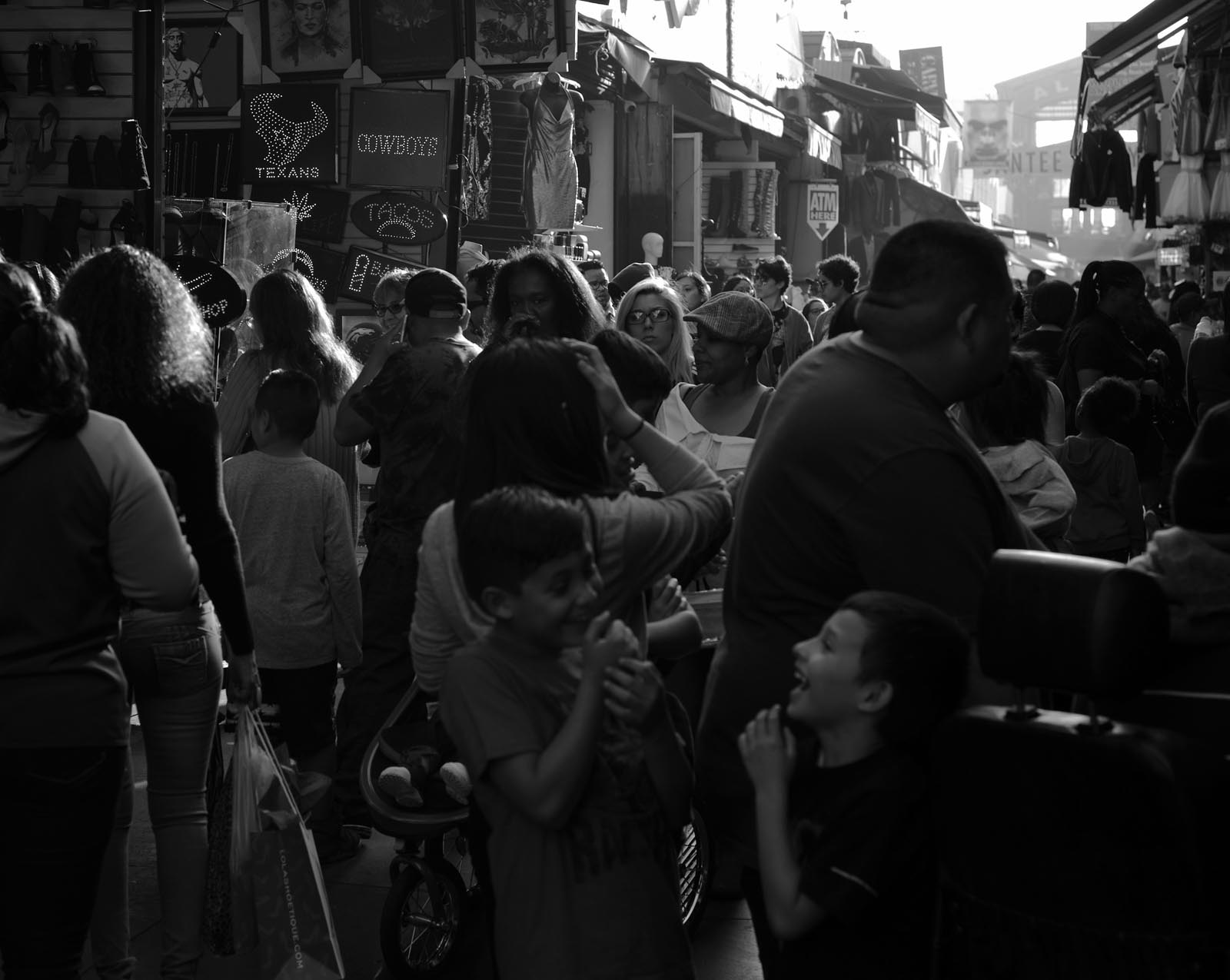 In downtown LA there’s a section called the Santee Alley. It’s technically part of LA’s fashion district. But there’s nothing ritzy or chic about the Santee Alley. It’s not a fashion center in that way. It’s a simple, down-to-earth, discount center—a long, winding alleyway with large, over-size umbrellas and countless stalls and food carts. And it has a distinct, working-class Hispanic feeling to it. All day, up and down the Alley, folks walk, shopping, people-watching. You hear Hispanic music. You see Hispanic food being cooked and eaten. It is, in fact, a lot like the working-class, Italian world I grew up in. A world, like mine was, with a distinct immigrant feel and identity. 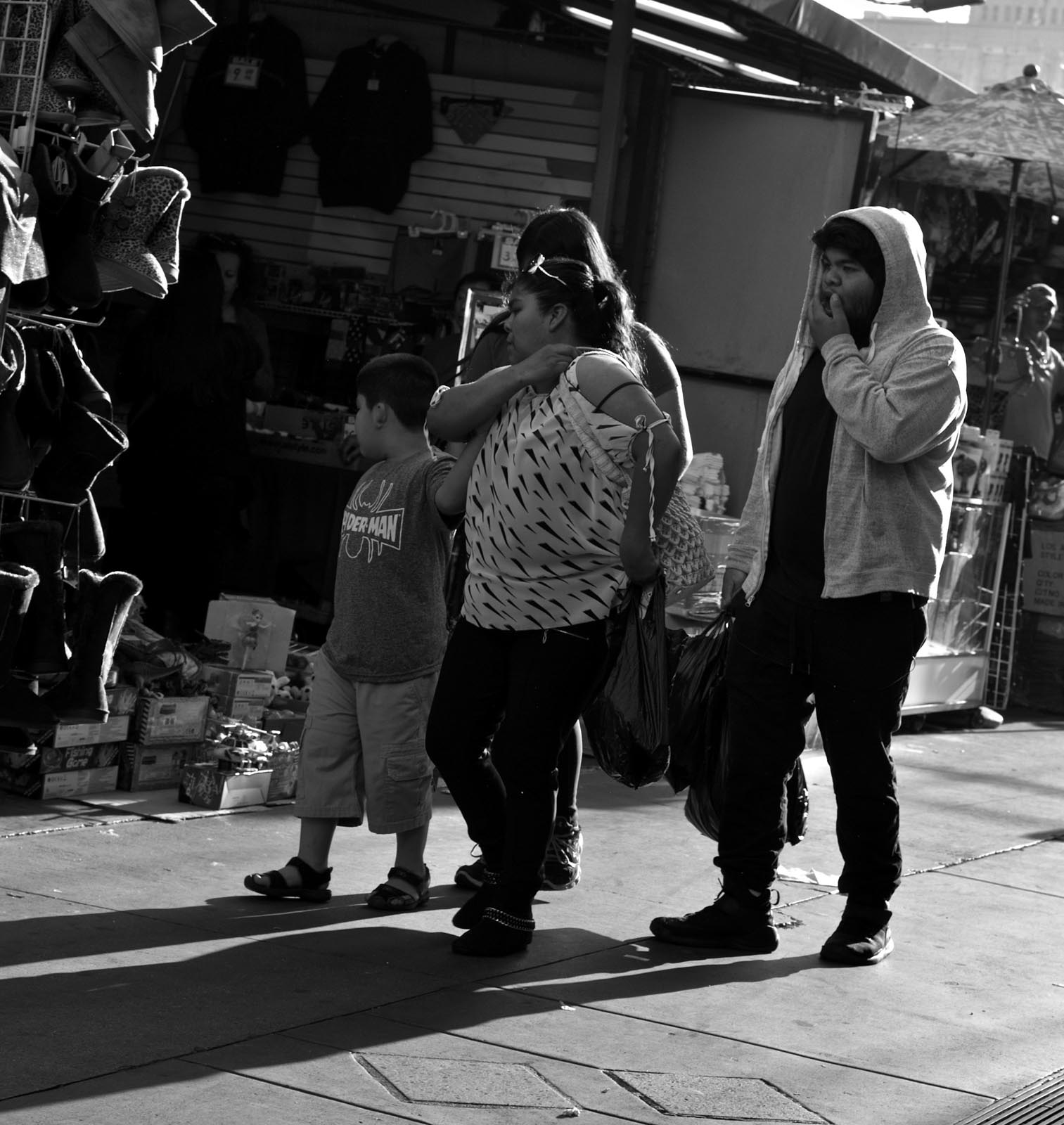 I shot the Alley over several weekends, very attracted to the street vitality of the place. The Alley is so long and narrow you never even see a car when you’re in it – a rarity in LA. And it’s got so many people, moving in and out of each other, looking, talking, eating. It’s very much like my old New York neighborhood, as I say. But I think what attracts me the most is the light. I shoot late in the afternoon. The Alley, being so narrow, creates dark, deep shadows. I’m definitely a shadow guy. When I see a crowd, I’m always half-mesmerized by the people. But I’m all the more mesmerized, late in the afternoon, when I see, as I do, those folks as shadow figures. I don’t know what exactly about this enthralls me. But suddenly all those people almost seem to have hidden natures to me. Perhaps they’re even a bit lost, looking for something or trying to figure out their own selves in a way. A crowd of shadow-figures, it deepens my interest. I look for patterns, for the way light glances off things and folks. A light which, even if slight, stands out for me in all the darkness. 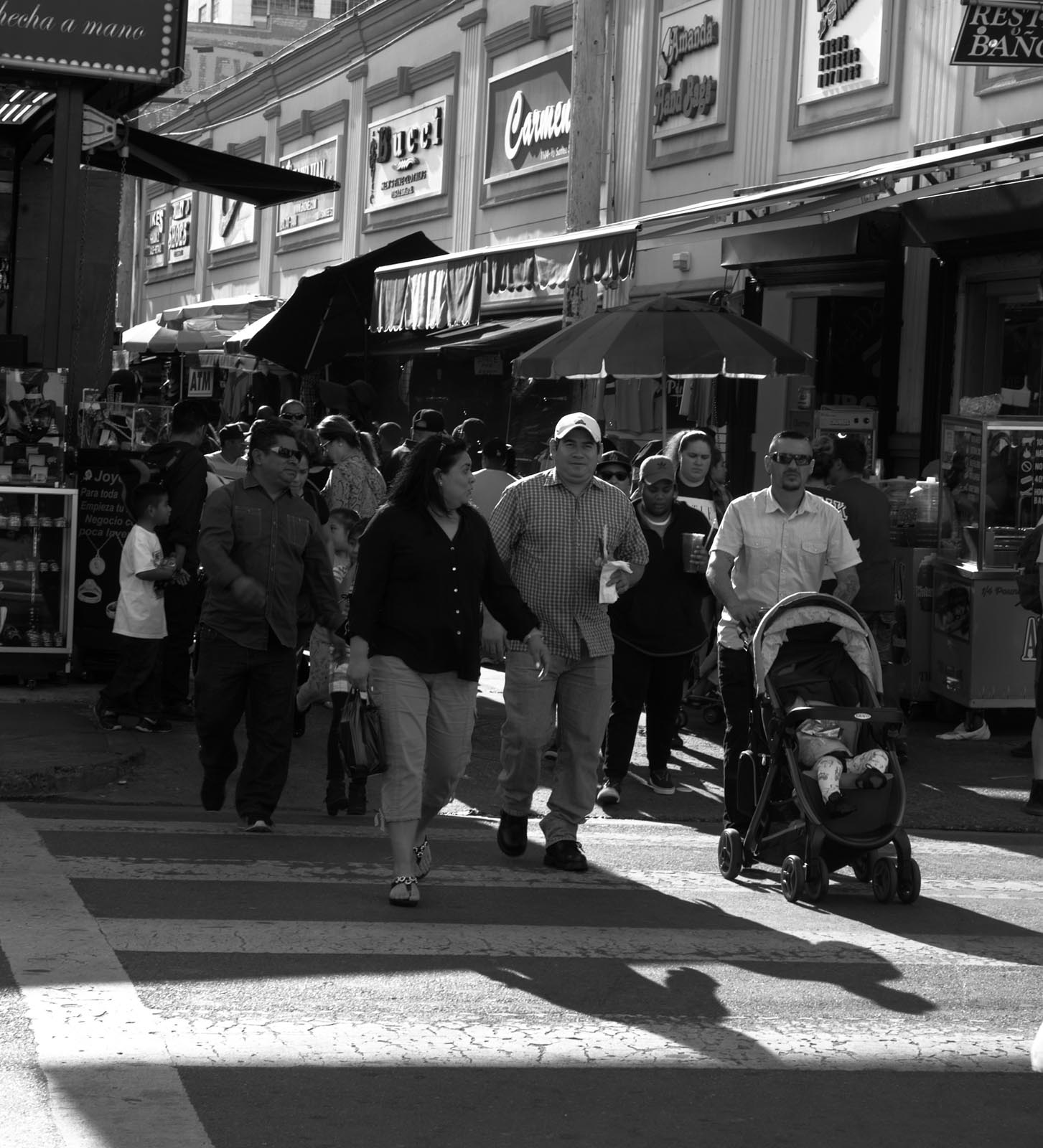 I shot the Alley with a Leica M9, a fairly new camera I’m still getting used to. I shot using zone focusing so I could get close up to folks and not be conspicuous. I’ve come to love the M9 because of the deep, rich darks—the blacks—it produces. It seems like the perfect camera for a guy like me with a shadow fixation. But I think it’s also the perfect camera for producing high-contrast shots. And the shots I took in the Alley fall into those two categories—shadowy dark or very high contrast. To me there’s a peculiar drama in a striking, high-contrast shot. Maybe it doesn’t have a realistic look. But I don’t mind at all. I’m seldom striving for realism. I’m more interested in patterns, in light and dark. How these qualities go together. I can find a pattern, enjoy the play of light and dark, in both shadowy shots and really dramatic high-contrast shots. It seems this is my peculiarity. 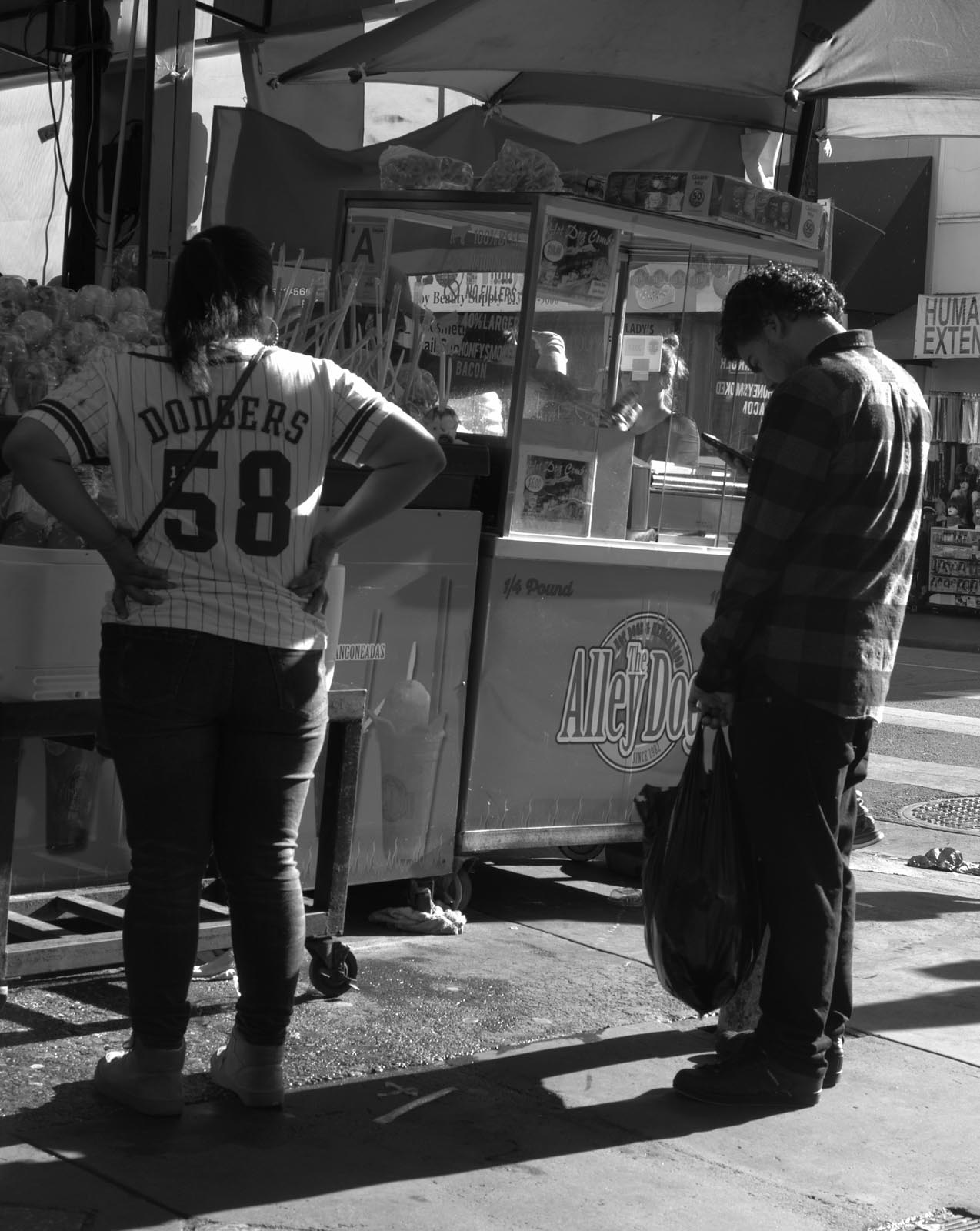 I think my favorite shot here is the high-contrast shot of a woman, turned away from the camera, standing in the middle of the Alley. 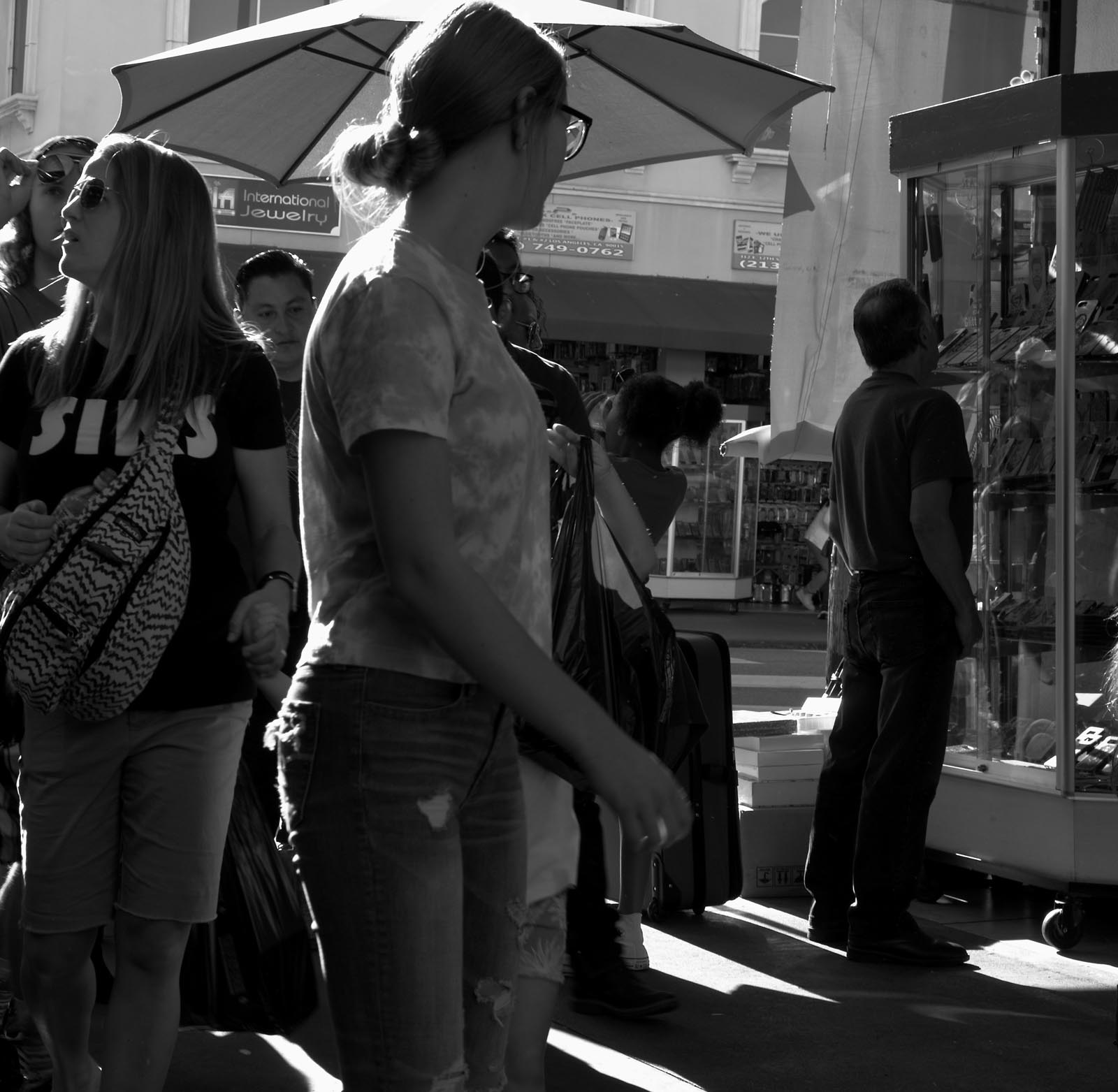 At the risk of sounding pretentious, I’ll say this shot has a geometry to it for me. The oversize umbrella just above the woman’s head sort of organizes things. Groups the three main figures together. This, for me, is a shot about curiosity. The dominant woman, so dramatic and backlit, is looking at, and curious about, a man to her left who’s looking at, and curious about, items in a shop window. And the third figure, a woman on the left of the photo is curious about, and looking at, something out of the frame. It’s just an intriguing moment. And the shot has for me an odd balance.

I am, however, also partial to the shadowy photos here. Where some of the people in the crowds are barely discernible. Maybe slightly highlighted by very indirect sun. They have that sense of mystery I like. That sense almost of dark patterns. To me in the darkness I can almost feel these people moving. 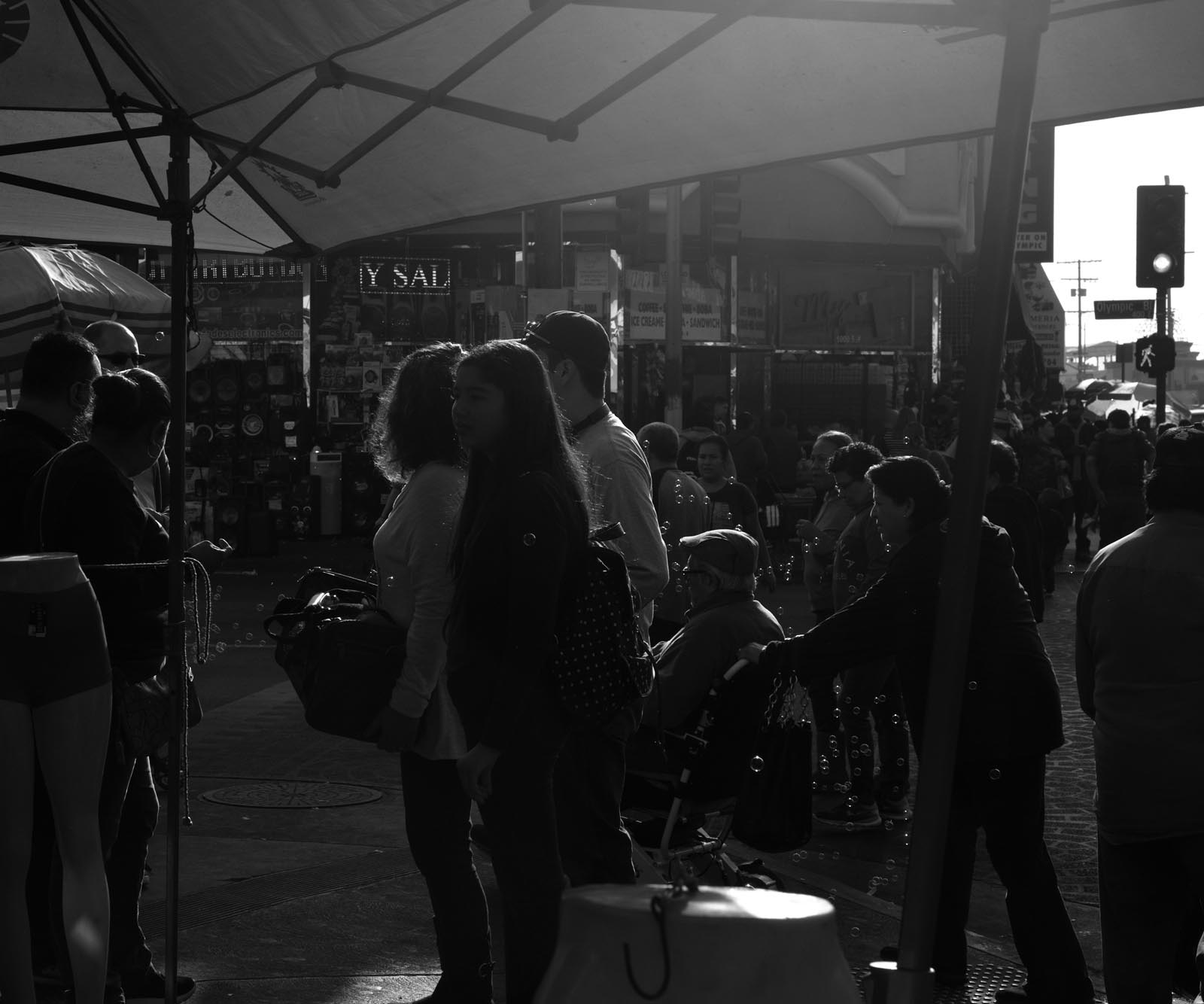 Santee Alley is a place I’ll visit often, I think. I love the street life. I love the distinct, immigrant Hispanic identity. Which again is like the immigrant Italian world I come from. It’s like a trip down memory lane for me. A reminder that new folks are always creating neighborhoods, according to their needs. That, in a way, the street is always renewing itself. Coming alive in unexpected ways. And when I get tired of driving around to supermarkets, or driving on highways, when I long to lose myself in a crowd and remember what real walking is like, I’ll definitely head down to the Santee Alley. Eager for the street life and the shadow life. For the odd patterns and the distinct play of light and dark. It’s like a breath of fresh air to me. 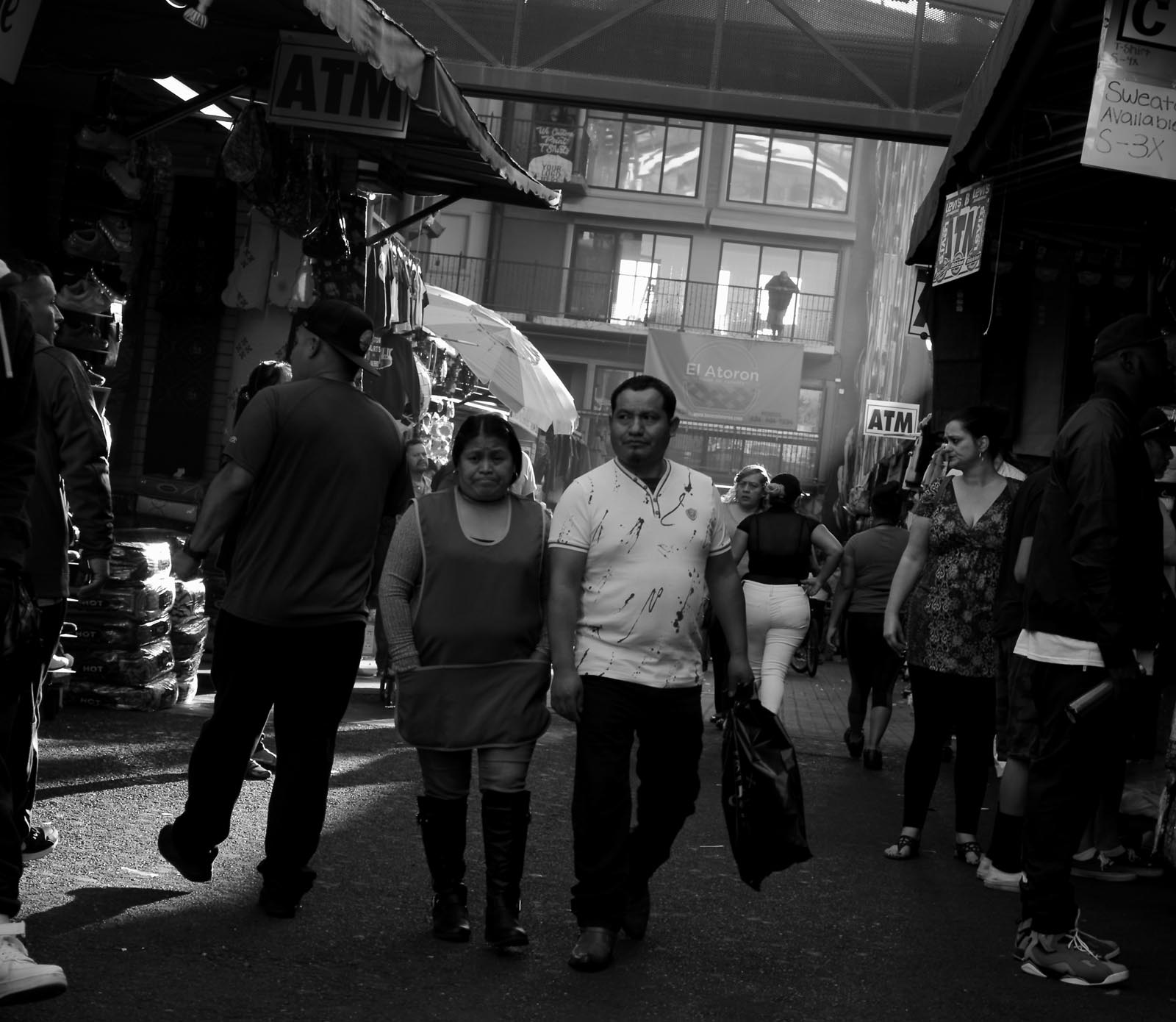