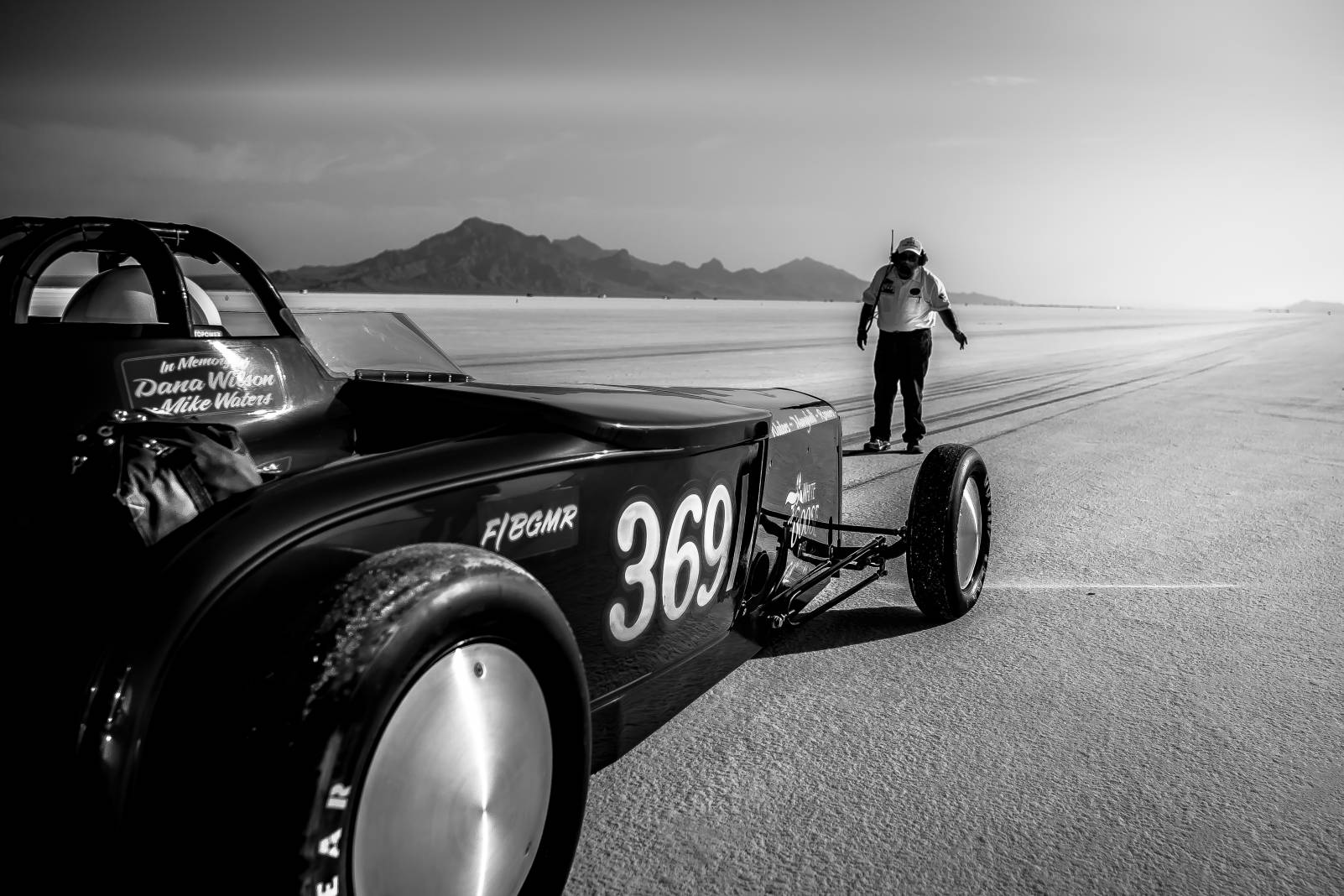 The Bonneville Salt Flats is one of the most unique natural locations in the United States, stretching over 30,000 acres. The Salt Flats were formed when an ancient huge lake dried up. It eventually shrank below its outlet and so its water became salty. As water continued to evaporate, salt deposits were left over 10,000 years ago.

Salt Flat Racing is a unique sport that consists of very determined people who drive hot rods, roadsters, belly tankers, lakesters, motorcycles, and stream-liners to “shoot the salt” in a simple quest to have their name added to the list of world record holders. 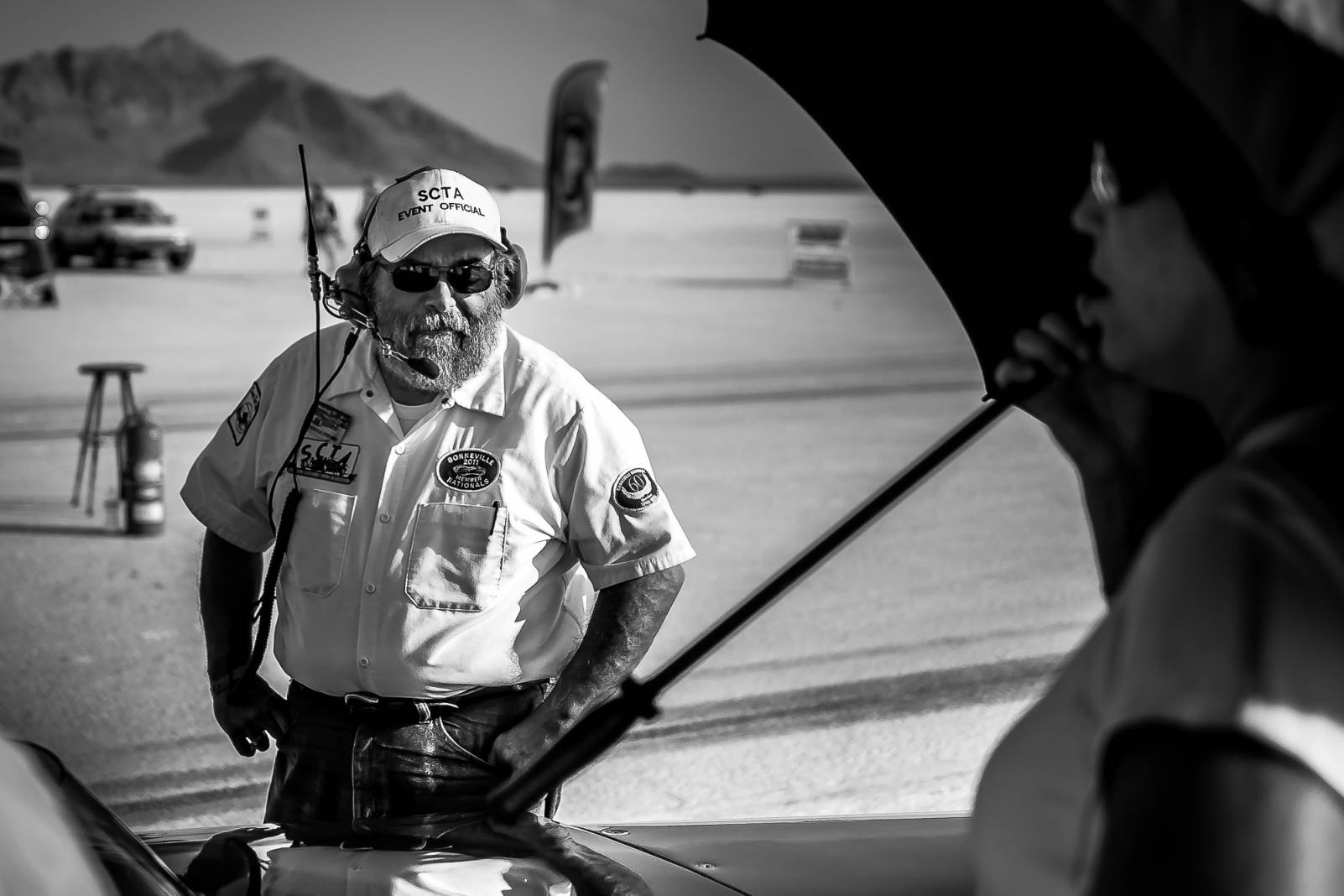 I discovered these salt flat racers in a 2005 movie made about a New Zealand speed bike racer Burt Munro and his highly modified Indian motorcycle. Munro set numerous land speed records at Bonneville in the 1950s and 1960s. From there, I researched what was going on with the Southern California Timing Association and watched numerous videos about home-built hot rods trying to set world records. It was quite intriguing that the event at Bonneville hadn’t turned into a big corporate event. It was still a lot of amateurs building cars in their garage and running them at high speeds. For some, the goal is not necessarily a record, but simply a personal best or the ability to claim “world’s fastest” three-cylinder, or flat-four, or small block V8, or whatever. It screamed at me to get involved as a fly on the wall with a camera. 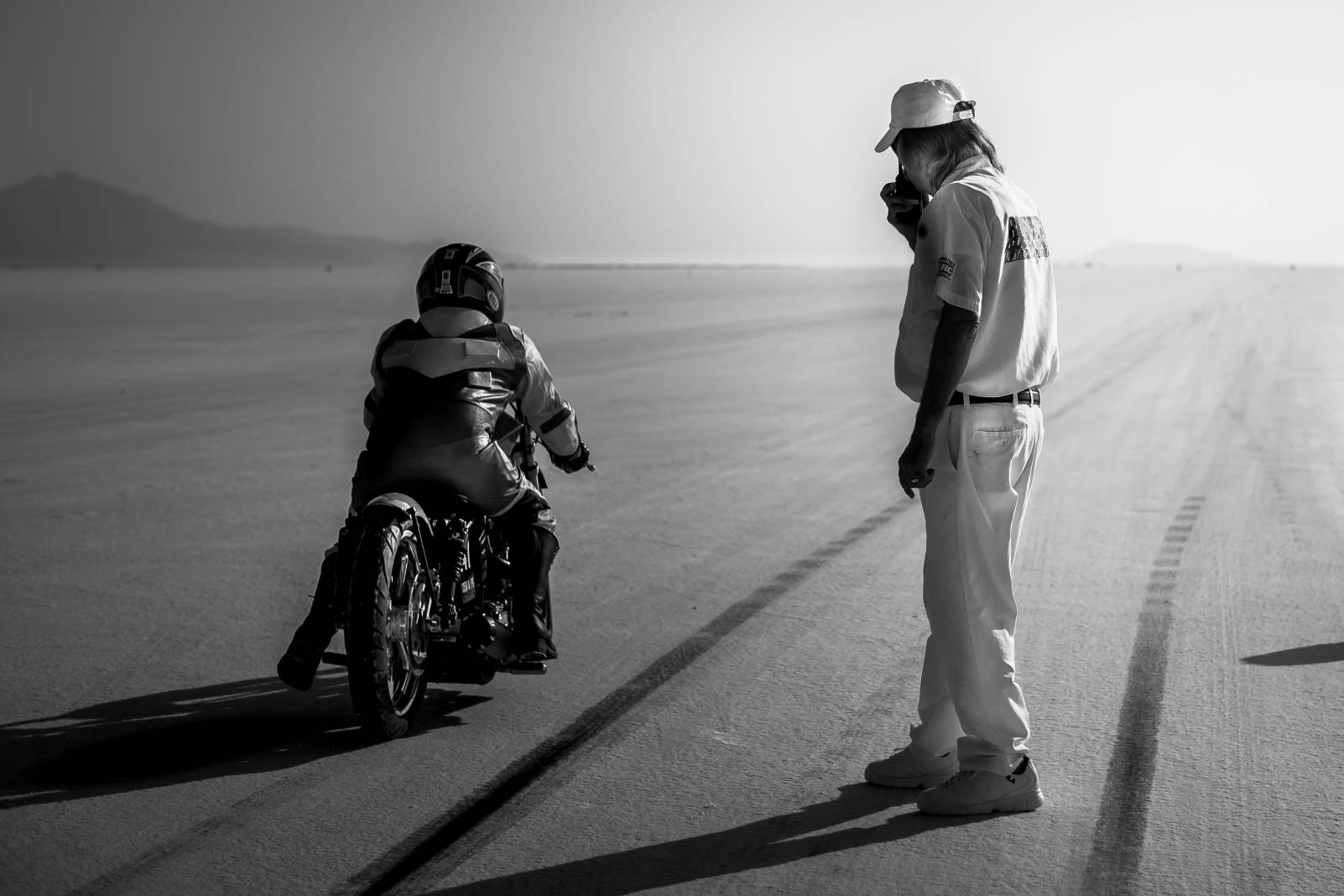 As a street photographer, my objective was to capture primarily the people in candid situations during one of these record attempting events. I had been there a few times before and knew in advance the challenges.

The location of timing and scoring is on the west end of the Salt-Flats and the nearest town is 10 miles away with only a small number of hotels. Reservations need to be made and pre-paid in full at least 9 months in advance. The other option is drive over 90 miles to find a hotel. 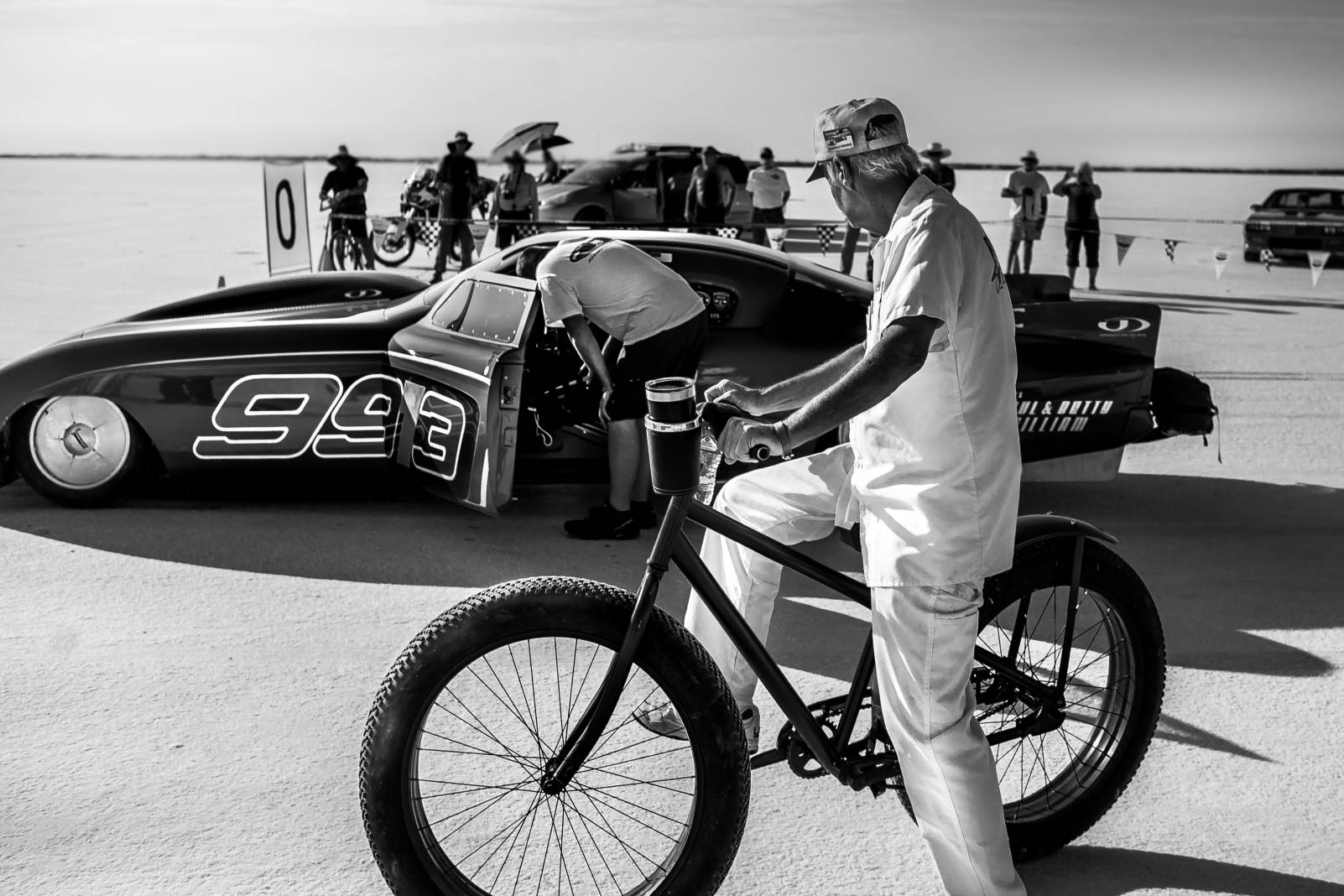 Rental cars are meticulously examined on return for salt in the wheel wells, under carriage, etc. Some rental car contracts state that if the car drives on salt you pay double. I learned all this on my first trip to Bonneville when I was handed a huge extra charge for clean-up.

So, my process is this: Bring shrink wrap and completely cover the floor, door sills, pedals, etc. Go to a truck stop hand spray-wash at the end of every day. Bring slip on shoes for driving and put your regular shoes or boots that touch the salt in a trash bag when you get in the car. You will find the salt sticks to everything. And when returning the car go through a car wash one more time. 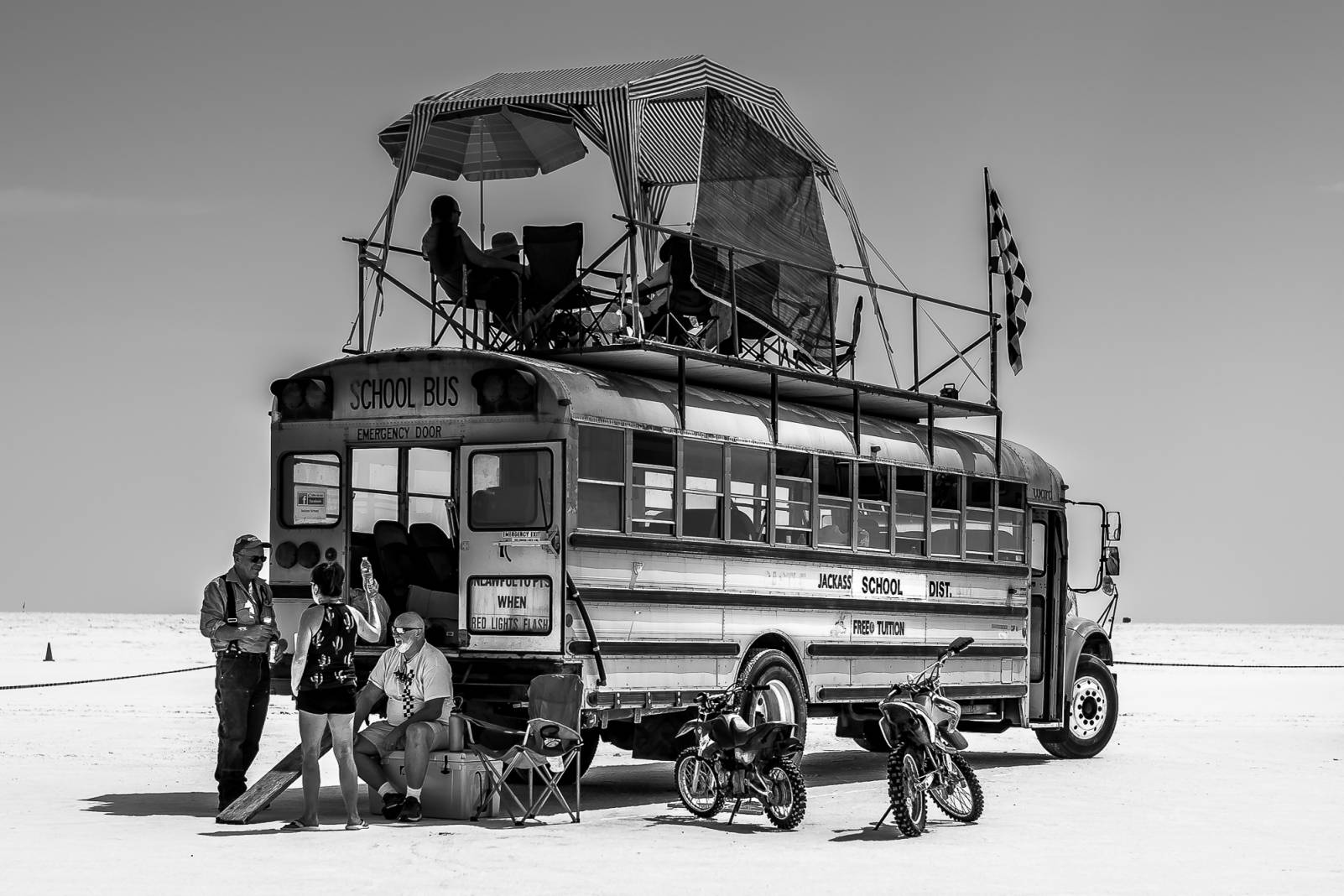 Use lots of sunscreen. The sun reflects off the salt. And it will be hot. Not un common to be 115 F. In the shade. Wear a big hat and wet rag around your neck. I like the wide brim straw life-guard hats that have a neck strap.

I brought two Leica rangefinder cameras last year. I shot with a 50mm and a 28mm. Both with 3-stop ND Filters. This next year, I will probably bring in addition a 35mm and maybe a 21mm. In the past, prior to settling in as a street photographer, I used long lenses. Getting close to people and the cars isn’t a problem so I like my current choices. 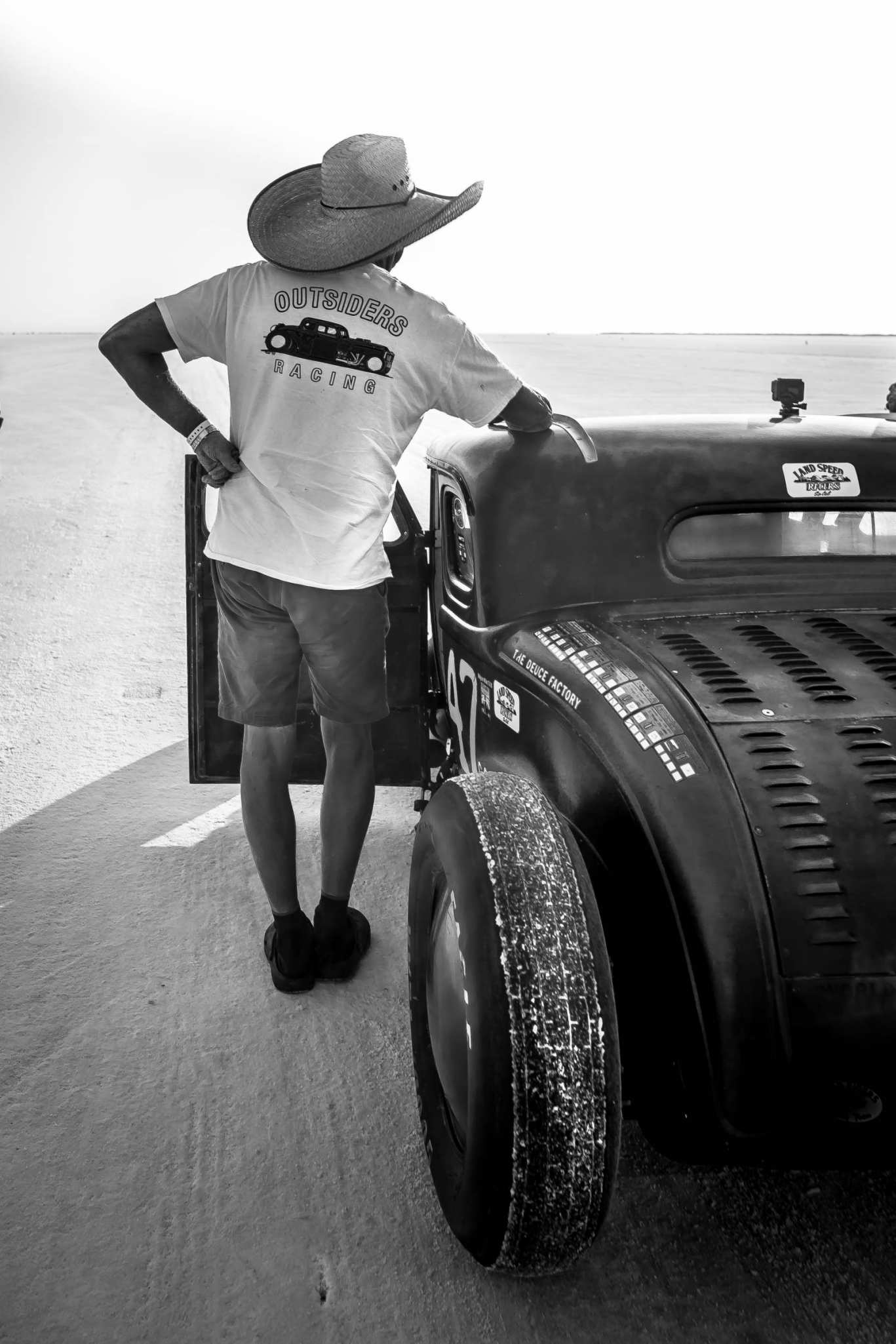 In my opinion, the best time to shoot is early morning. Its cooler, the light is fantastic peeking through the mountains, and the cars are in line to set record runs because the air is denser and the engines can produce more horse-power.

By noon most cars are doing test and tune runs and it’s hot. I use reusable thermal freezer bags as a form of insulation for the camera stuff. I start the car remotely once an hour to keep the air on. I buy a cheap cooler and two cases of water and then buy ice every day. I soak my neck rags in the ice as well. I wear light colored clothes and put ice in my pockets during the hottest times. 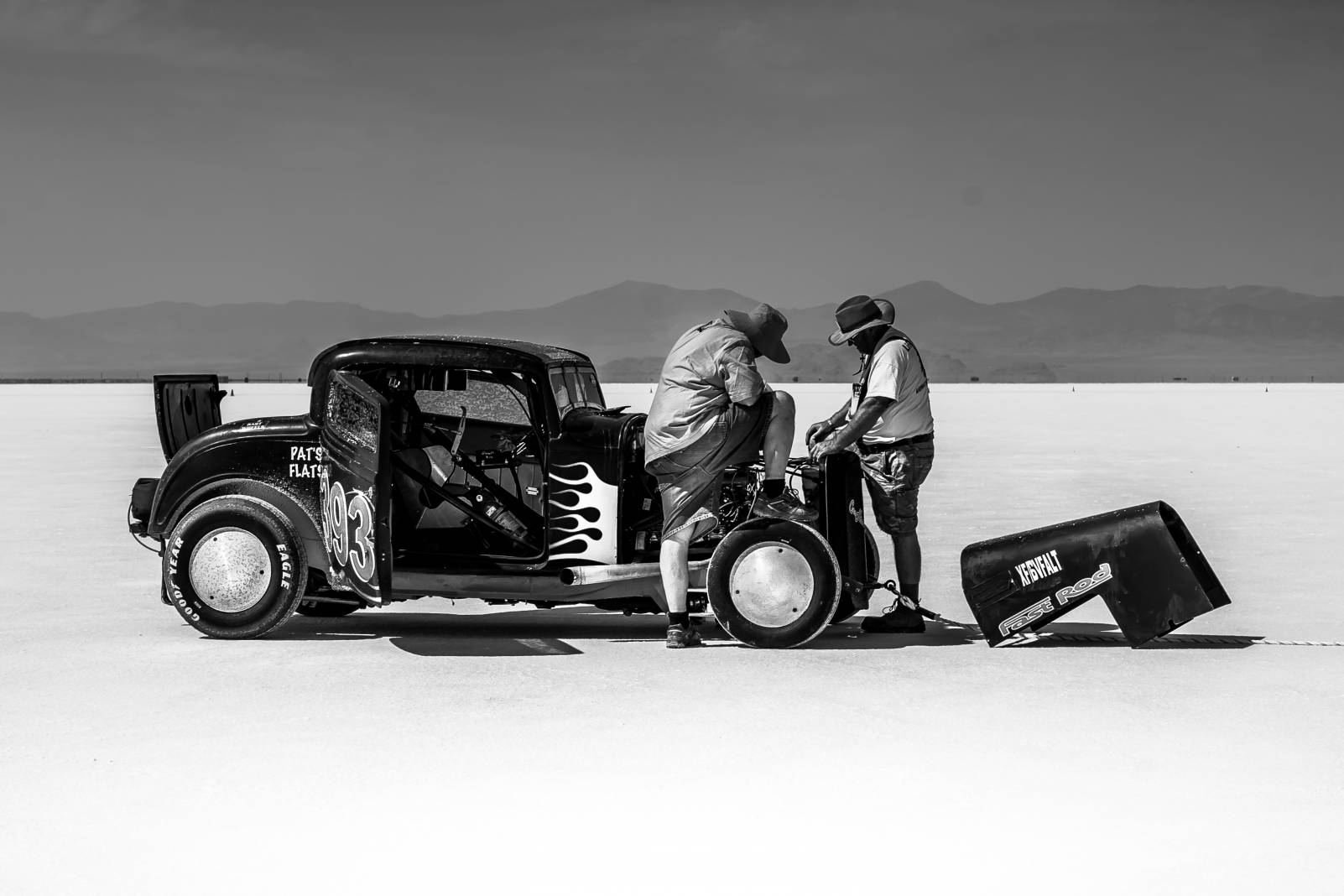 Yes, it’s a lot of hassle. But think about finding a place where no one is shooting people and candid situations. Add cool cars that no one ever sees. For example: walk around any day in NY, London, Paris, or San Francisco and you’ll see multiple street photographers shooting there every day. On the other hand, the Salt Flats are a virgin location for street photography. It’s very special. I spend three to four days shooting at Bonneville each year. I live in Minnesota, and when all is said and done, I spend the same amount or a little less than what I would going to a major city only to collect the same photos that hundreds of other street photographers have done. To me that makes going to the salt flats worth every effort. 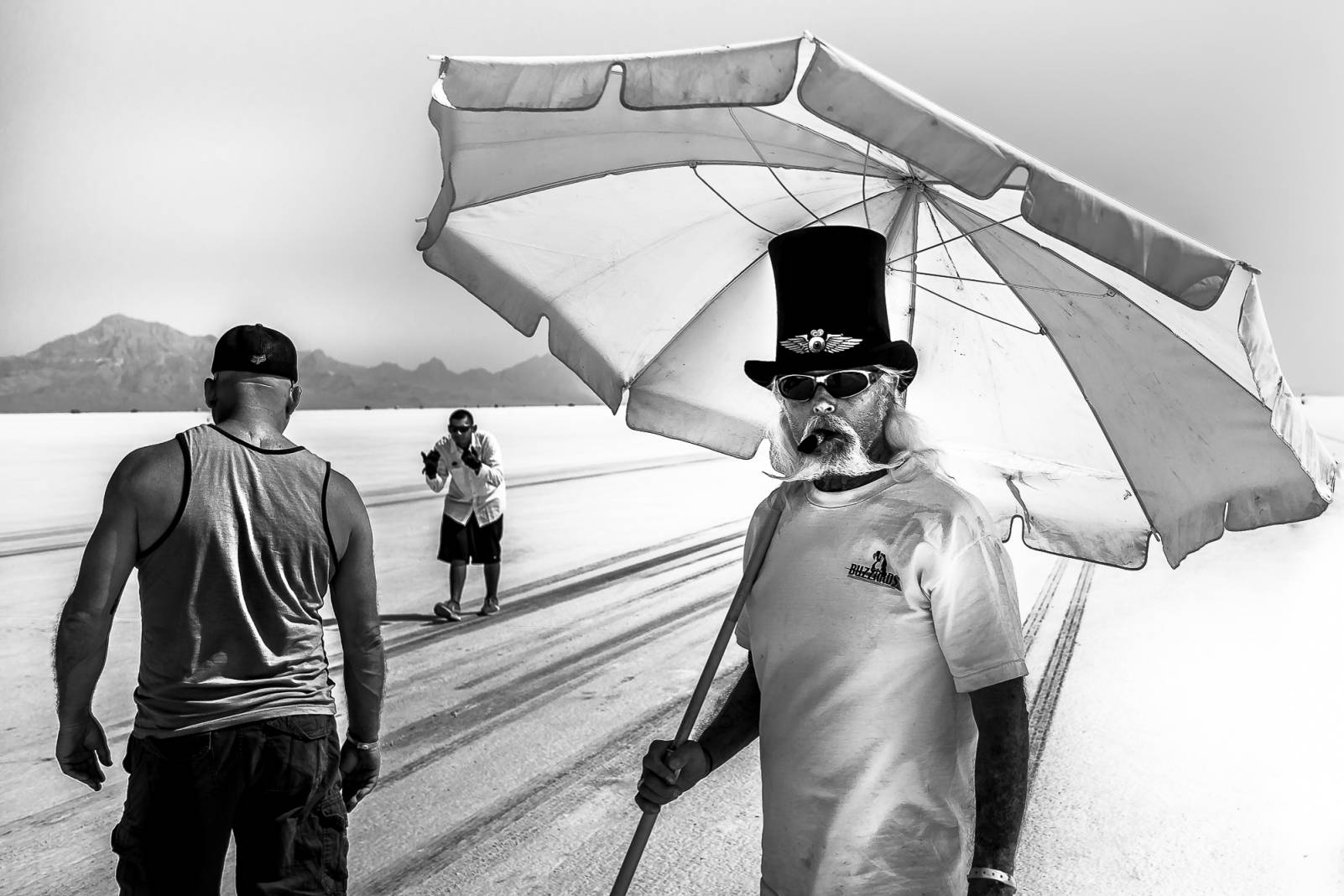 Take the above scene for example, this scene is special. There’s this guy with a patio umbrella and a big mustache. The guy to the left has great physical form, which is awesome, and then the little guy is bringing a record setting car to the line – a story in itself. The shot was quick. The sun was bright and washes out the right side, but the three bodies contribute to a great composition. It’s an example of the first photo is the best. I shot many in that location, but none had the impact and story strength that this one did. 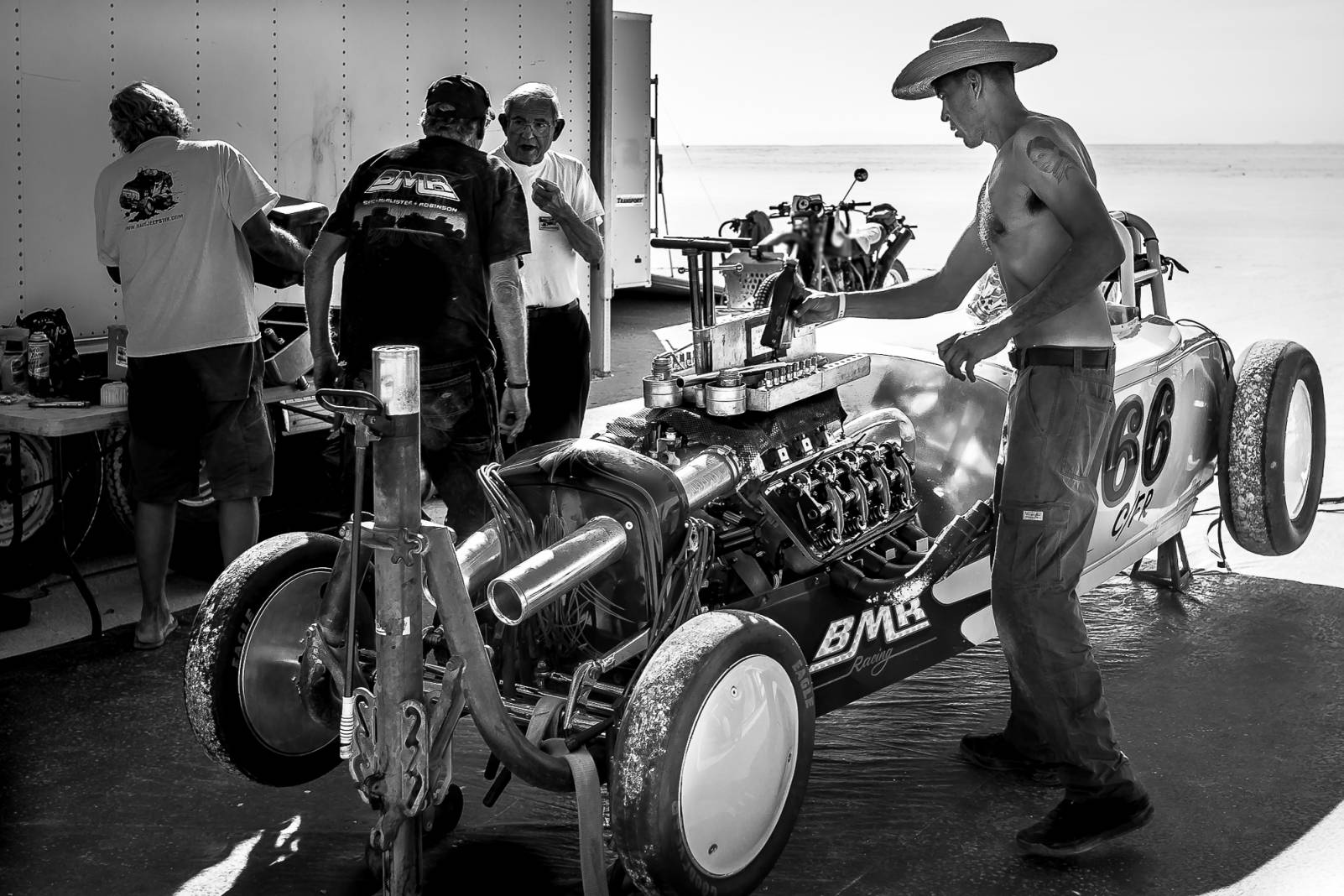 This image is my favorite. Think about trying to define this photo and its time frame. It’s impossible. It could be in the 50s or 60s. The B&W process makes it timeless and draws the viewer into the moment. I show this one at many photo discussions. It’s the reason I shoot B&W. 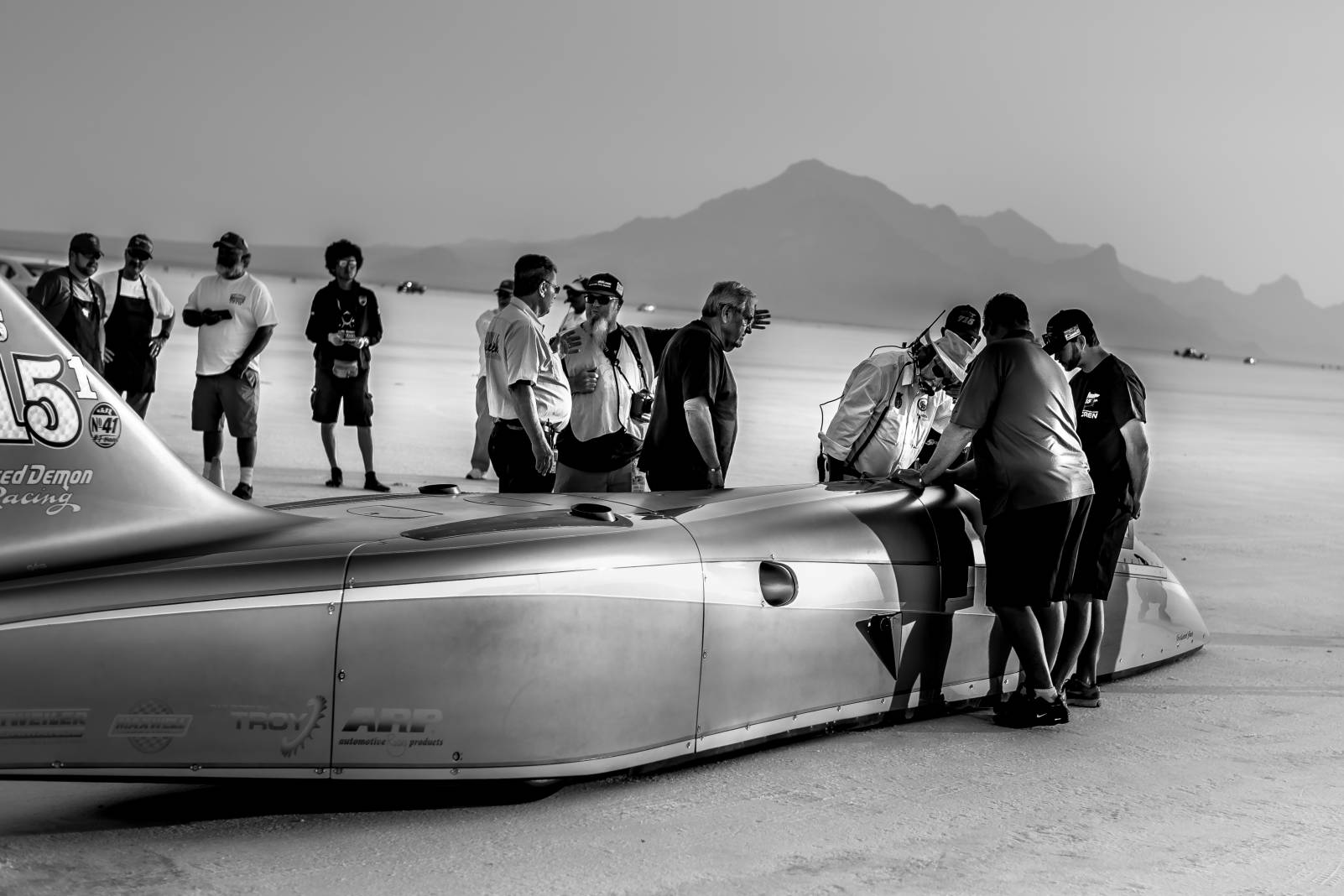 The photo of the sleek streamliner at dawn is another favorite. Very modern car with people non-descript in time yet the car remains futuristic. The light is fantastic. Gives great definition and highlights. Shots like these keep me coming back year after year.

Without a doubt, if you are looking for a unique street style experience with colorful characters and really cool cars – this is it.