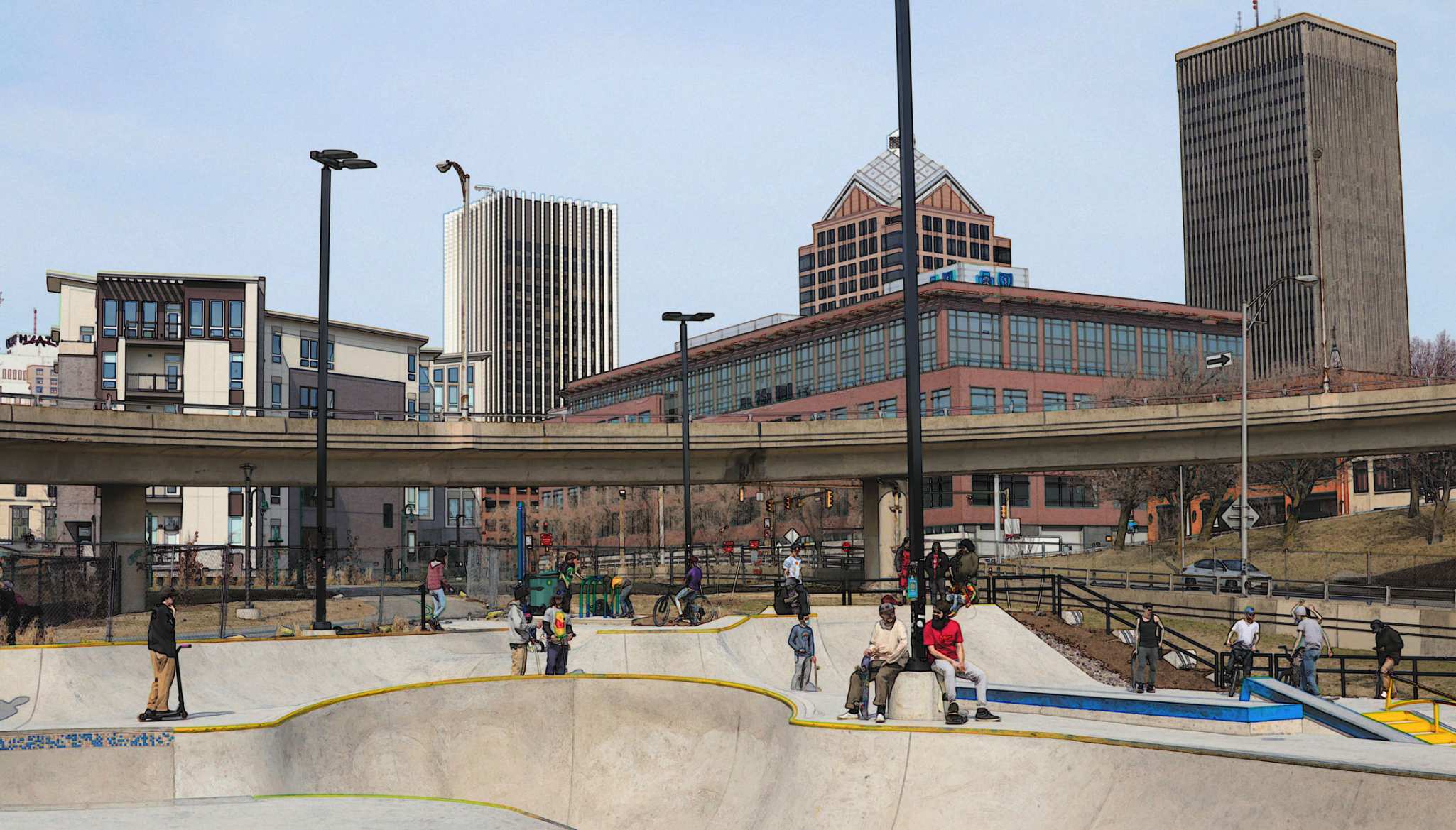 The past year has been difficult for all of us. With COVID came social isolation. We saw the closing of dining spots and theaters, and the cancellation of street festivals and other outdoor activities. The streets were quiet, and we began to spend a lot of time alone.

As a street photographer, I sorely missed the chance to be with people, but also to be the outside observer of others. I missed being able to preserve those unrehearsed moments that come to the lens. To view life as it unfolds in public space while the participants are unaware of the camera. I had no trouble finding these spontaneous moments pre-COVID, like this one of two kids with matching sunglasses.

While exploring the streets of Rochester with my camera in November of 2020, I was told by a jogger on the street that I should go to the Roc City Skatepark for ‘some good shots’. The skatepark is built along the Genesee River Trail in downtown Rochester. The park was conceived in 2008 as one of several community venues to enliven downtown. Phase I of the park opened in November 2020, with two more phases planned. The park is surrounded by an on-off ramp, the river, and two city streets. I decided to check it out.

The day of my first visit to the park in November, it was just opening. I was feeling a bit pessimistic – because of COVID but also because the site of the skatepark was once a neglected area in the city. As I approached the park on foot and heard the voices and the sounds, my mood began to improve. Soon, I saw people and colors, motion and action. It was a welcome change from the vacant city streets. As I lifted my camera to check the lighting, I snapped off a few shots to make adjustments, and found myself looking for my subject. I found one in a confident young man with dirty blonde hair, a Carhart hat, and bib overalls who could become horizontal on his skateboard.

I returned to observe the park several times between November 2020 and March 2021. On my first trip, I noticed the obvious – the action, the color, the characters, the trick well done. But as I revisited the park, I began to notice more about the group dynamics.  The skaters seemed to have a way of operating as a group. I did read about “Skatepark Etiquette” – a set of rules designed to prevent disorder or injury at the park (quote). Skateparks reportedly have an unspoken set of rules that promote supportive interaction, direct traffic, and allow novices and experts to participate simultaneously in a confined space.

I observed such etiquette during my visits. I saw that skaters are more aware of their surroundings than it appears. They seldom run into each other during their maneuvers. They do not interrupt a trick in action — everyone gets to complete their effort.  And everyone gets up and out of the way when they are done, leaving the area to make way for the next person. At times, they are seen standing in line waiting for their turn.

Skaters are very supportive and positive toward one another. I never saw a skater mock or make fun of any other skater. Instead, they encouraged and validated. A lot of learning goes on in such an atmosphere.

There was also some division of space. The more experienced skaters spent most of their time in the “bowl” (deep, hollowed out areas), doing advanced tricks that boggle the mind and the camera. These skaters had a persona of expertise and calm, even while performing amazing feats. While focusing on the experienced skaters, I was able to photograph the performances in the bowl from start to finish, as their bodies contorted from vertical to horizontal and back again. And the looks of the skaters were each unique from hair to clothing to the skateboard itself.

Other skaters were off to the side area practicing – looking determined and focused, concentrating on perfecting their skills.

Of course, sometimes practice involves a fall or two. But nobody laughs. The rule is to respect failure, to be positive and to know that falls are part of the process.

You also have those on the fringe of activity. The park is a place where young people go to pass the time. They were found on the outer edge of activity, doing their thing. It was like any other street scene where people go where the action is to hang out, interact, and observe. The fringe area is also a great place to capture spontaneous human expressions or characters.

Going to the Skatepark gave something back to me that was taken away by COVID. I got the chance to be on the street again, like any good street photographer wants to be. I got people, personas, action, and human interactions. I got to photograph a time in space that people only see once but want to go back to, either physically or in a photo.