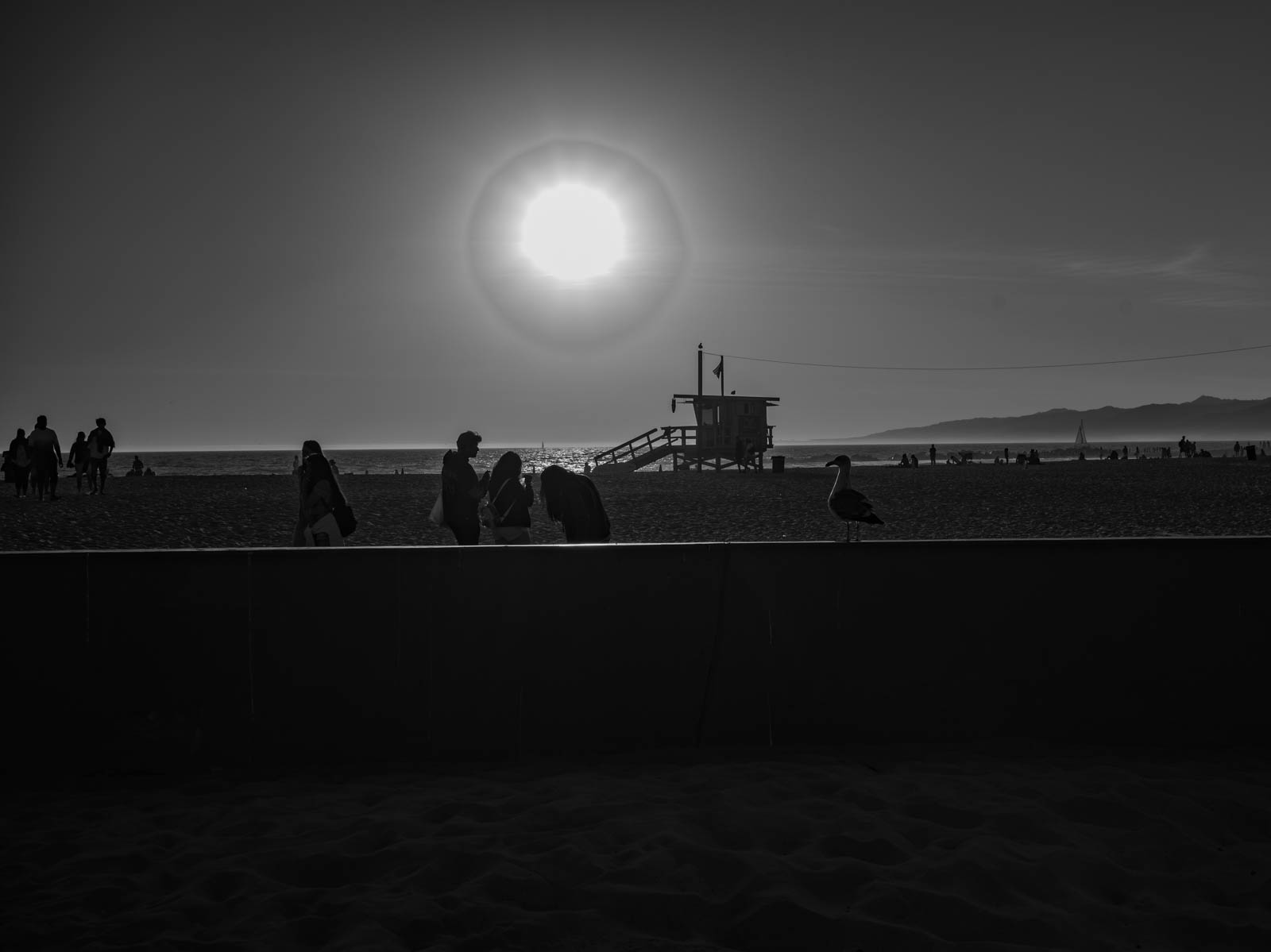 It’s weird to shoot in a kind of reverie. Almost in a dream state. But that’s what the late afternoon sun can do. Put you in that state. That’s what I look for as a photographer. I find it on the beaches, piers, promenades of Santa Monica and Venice, California. In the late mystifying light that brings its own kind of shadow. The shot up above being like that. A midnight sun over a mysterious nighttime world. I remember shooting transfixed. I guess my dark filter and my camera settings did this (my processing too.) Took what was a waning, afternoon light on Santa Monica beach, turning it into what you see. It’s the quiet and secrecy, the receding distance that got to me. The small dark figures wandering, as if mesmerized themselves. That’s how I saw it. A whole world—lifeguard’s hut, long beach wall, barely visible seagull and that pure, odd burning sun. I guess you’d call it a landscape. Or a beachscape. A way of seeing what’s hard to see.

I look all the time for this waning afternoon light. But where in the afternoon you look makes a difference. Sometimes I’d find it earlier in the day. On the promenade of Venice beach, I found it, earlier one day. Saw it turn three women into a unique pattern of brightness and dark: 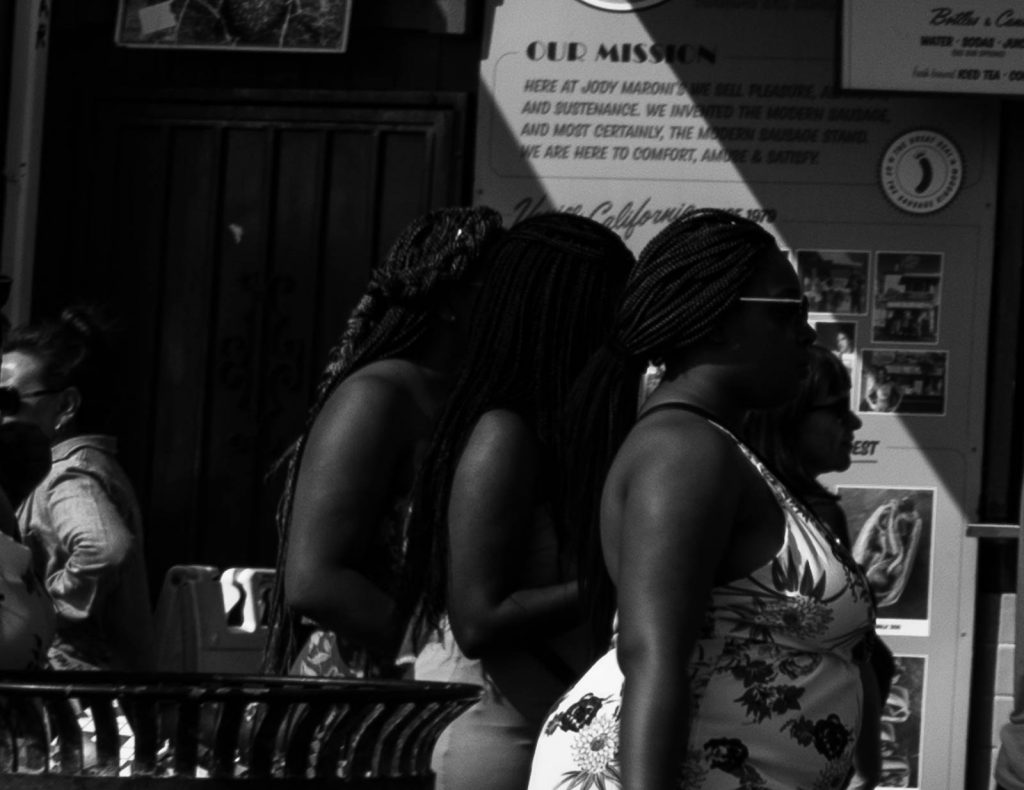 Striding forth these women were like a mystery to me. You felt their spirit in the way they strode. So close together, moving in unison. I watched them as they moved, wondering who they were. What united them. Part of the ceaseless activity of the promenade. And through that late afternoon light—not as late as in the first shot—I’d keep wandering, looking for other glimpses, hints. For that’s what the light could do. Give you those glimpses. I found one in a panel shot I took—long and narrow, with an odd broken light:

You see a man, his head cut off. A kid, brightly lit. You see shadowy women. It’s the ceaseless, fractured chaos of the promenade. Folks moving, turning, passing each other. Folks swept up in a ceaseless need to move. That’s how I saw it. And it’s emphasized by the broken light. Me, I’d keep strolling myself, looking for other glimpses. Up and down the long walkway. Past stalls and hotels. Past small stoops and restaurants. On the stoop of a building I saw a woman stretching: 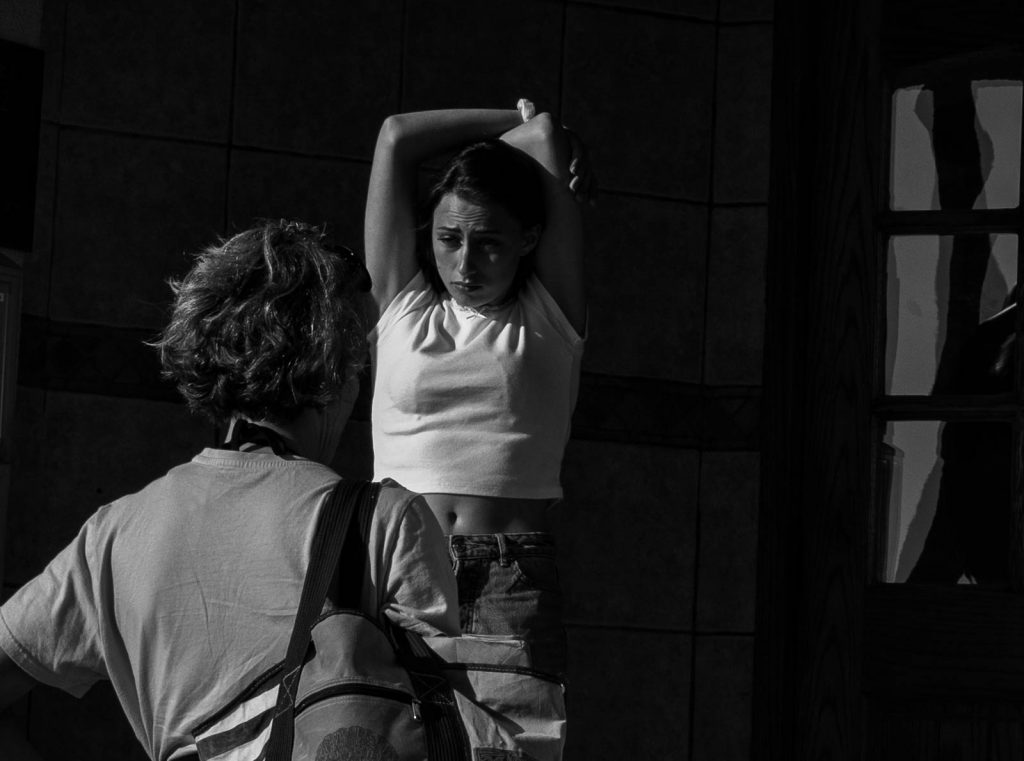 For sure the light seemed to heighten things here. The woman’s expression perplexing. Half a sleepy boredom. Half a quiet opposition. This is what happens to you on the promenade. You see and wonder. You ask and think. Whatever is between these women, it seems intense, if quiet.

Day after day I’d wander, the beach being close to my home. Day after day in that odd light, sometimes forgetting where I was. The sound of the ocean, the crowds and solitary figures—all putting you in a mood. As if you were meditating as you moved. As if the meditation helped you know what to shoot. On the Venice beach pier one day I came across a man who reminded me where I was. A middle-aged man, spirited (I spoke to him), carrying a surf board. There’s a dim but emphatic light, this time on an overcast day. The man’s surf board lit up like a charmed object. 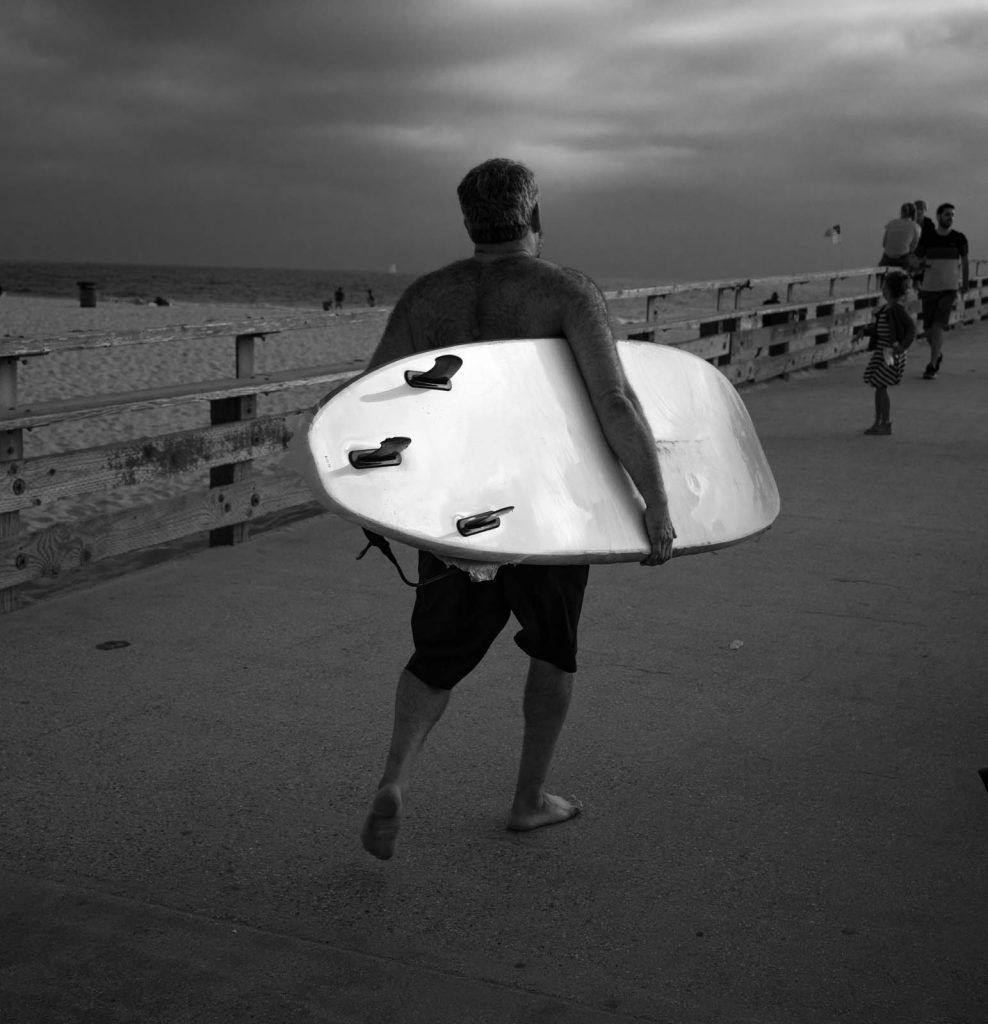 I’ll end this sampling of my shots by going back to the beginning. For I realize I have a kind of series of midnight sun shots. And these particularly seem to be taken in a reverie-induced state. These last two photos, however, are different from the opening shot. That opening photo being somewhat realistic while these are like fantasies, strange imaginings. Both shots were taken on a dark, massive ridge (this is a sand dune authorities put up to protect against the ocean). Both shots have that odd, burning light in a nighttime setting: 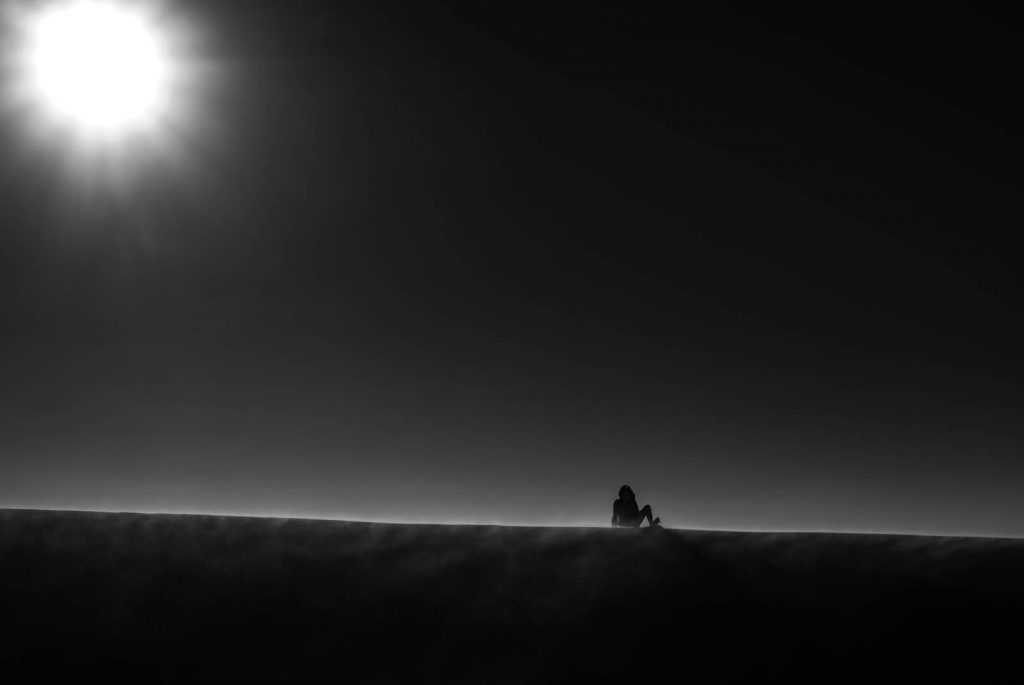 The cryptic figures in the first shot I thought of as dancers almost, loose and poised. Companions to each other. Oblivious to the burning light coming down on them. Whereas the solitary figure in the second shot, trying to scale the high sand dune, looks kind of lonely. A picture of solitary effort. In both these shots I couldn’t take my eye off these small, dark figures. Or stop being fascinated by the weird light. That’s how it was for me on late afternoons, wandering and wondering, trying to see what can’t always be easily seen.