Until now, it is impossible to travel in time but the past always has a retelling.

It takes eight and a half minutes for sunlight to reach earth. This implies that when we are looking directly at the sun, we are looking back in time – a simple but tricky concept to envisage. This takes epic proportions when we look up at other stars visible to the naked eye.

I am a resident of Noida, a part of the National Capital Region in India. Amidst the depreciating visibility of the night sky, some galactic neighbours still offer a peek; into our history as well. Assisted by stars and a camera, I have tried to juxtapose the cosmic world and history as seen on the streets of Delhi currently. 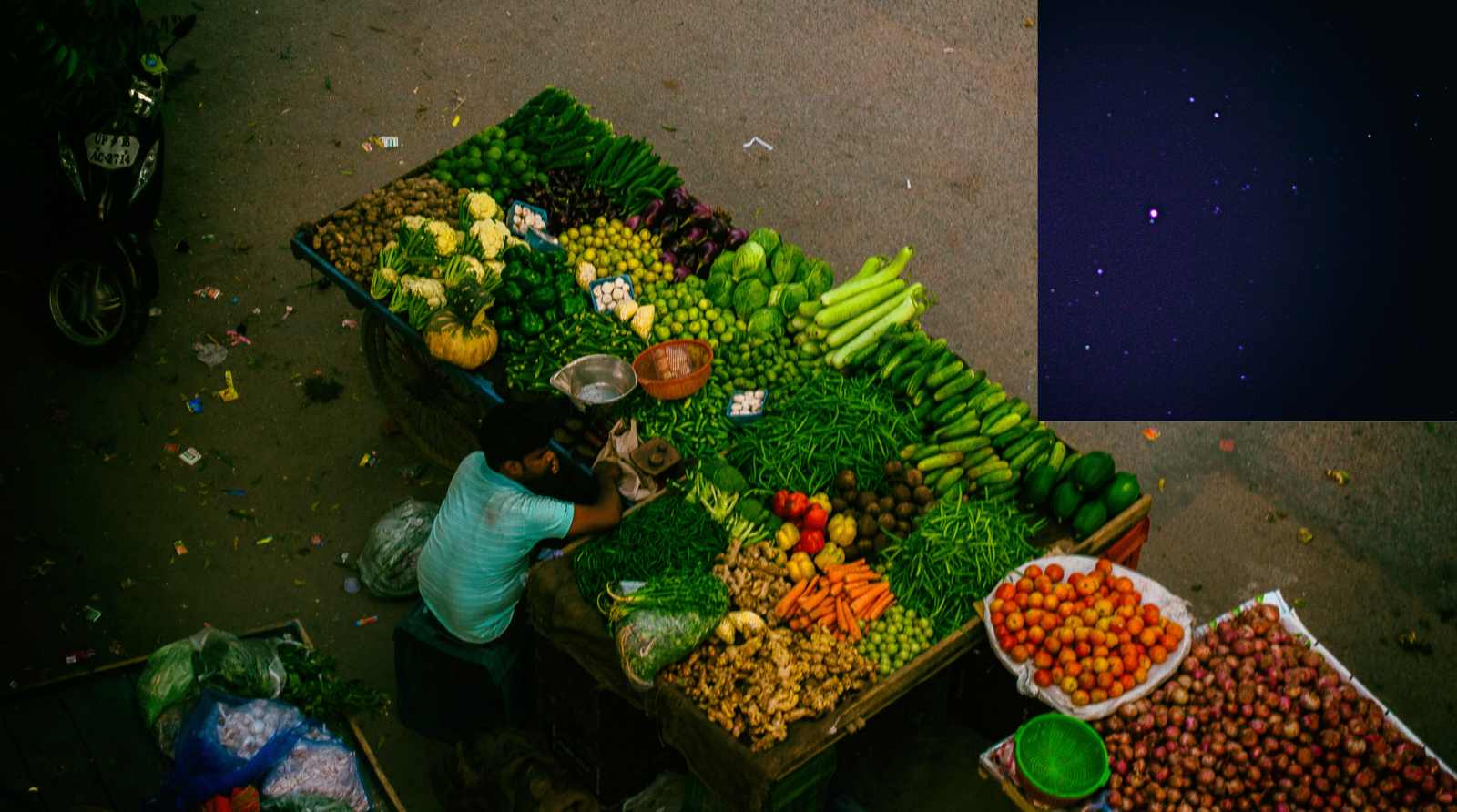 Call it a “W” or an “M”. Cassiopeia is a prominent constellation of the northern sky. Amongst its members, Caph is 55 light years away. Since the Bengal famine of 1943, measures were taken by India to avoid a repeat. The Green Revolution kickstarted in 1963. Today, a vegetable seller is still trying to make ends meet as our society continues to struggle with disproportions. 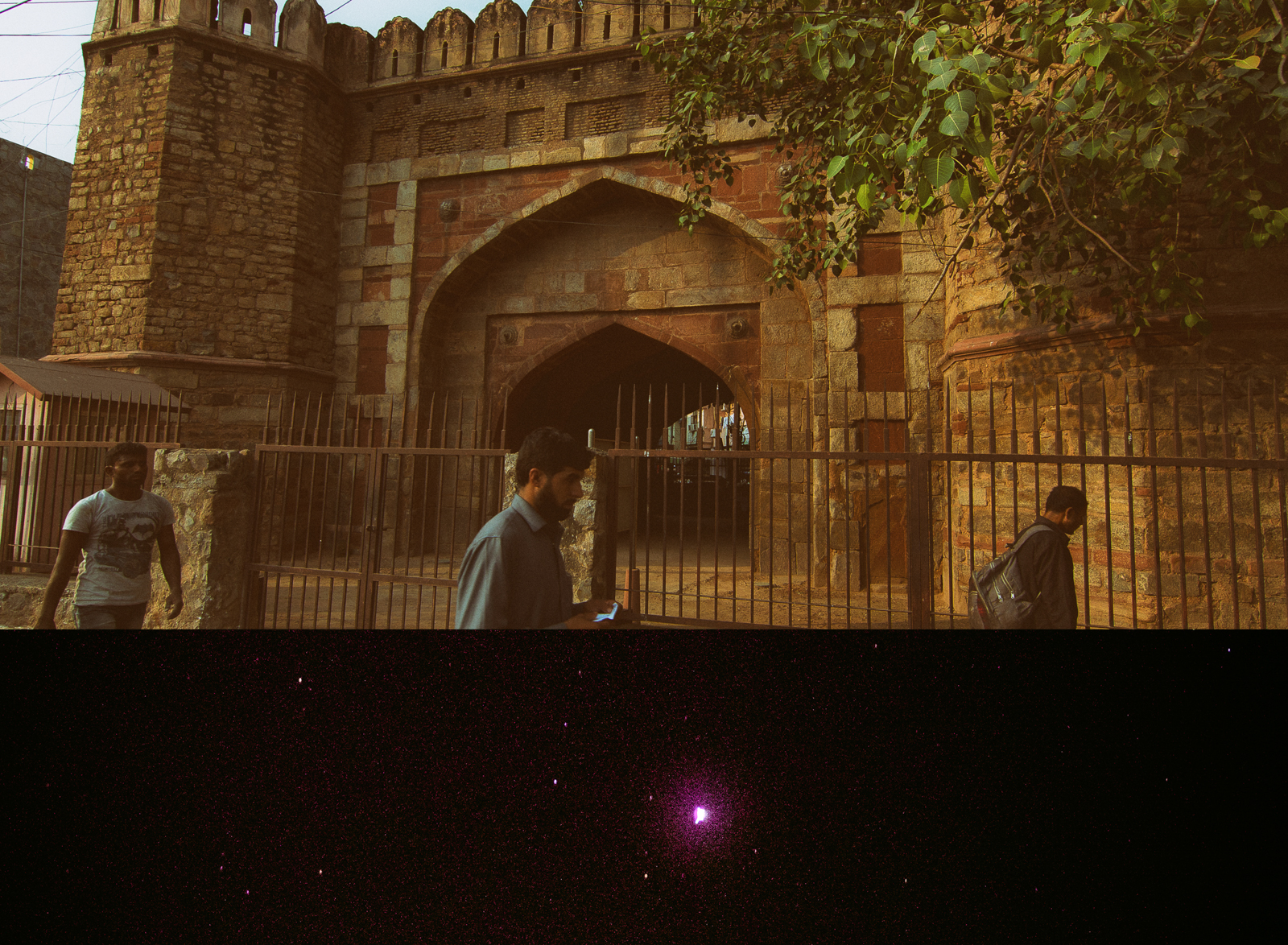 The year 1976 witnessed the peak of emergency and the demise of democracy in India. The Turkman gate massacre in Delhi was one among several onslaughts. The gate reminds us of a dark past, so does Capella; taking us back 42 years. 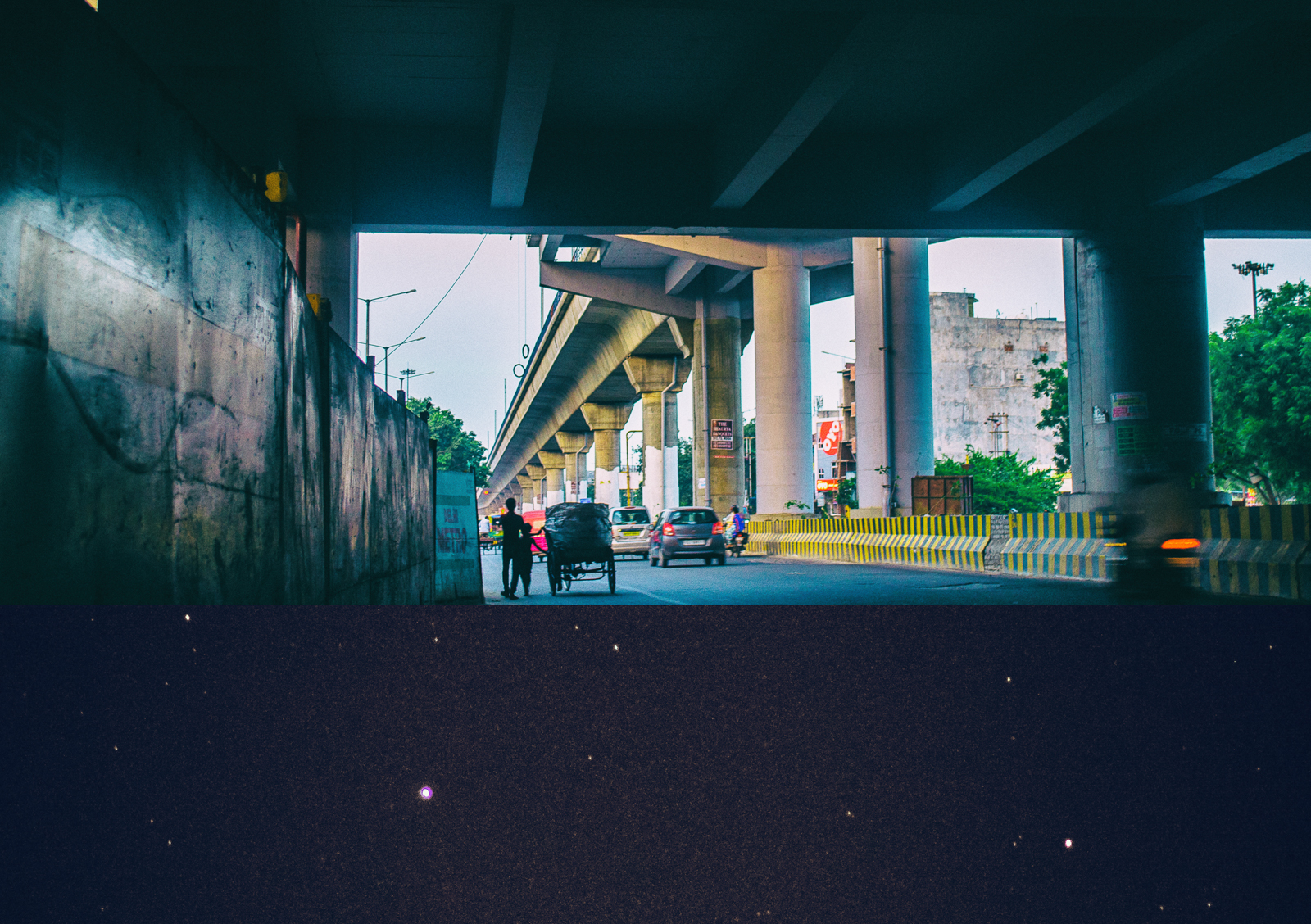 Navigation and transport owe a lot to astronomy. The second most expensive subway system of the world is currently operating in India’s National Capital Region. Construction continues incessantly. The triangle in the night sky. The Delhi Metro services were inaugurated in 2002. Look out for Altair (16 years) as part of the summer. 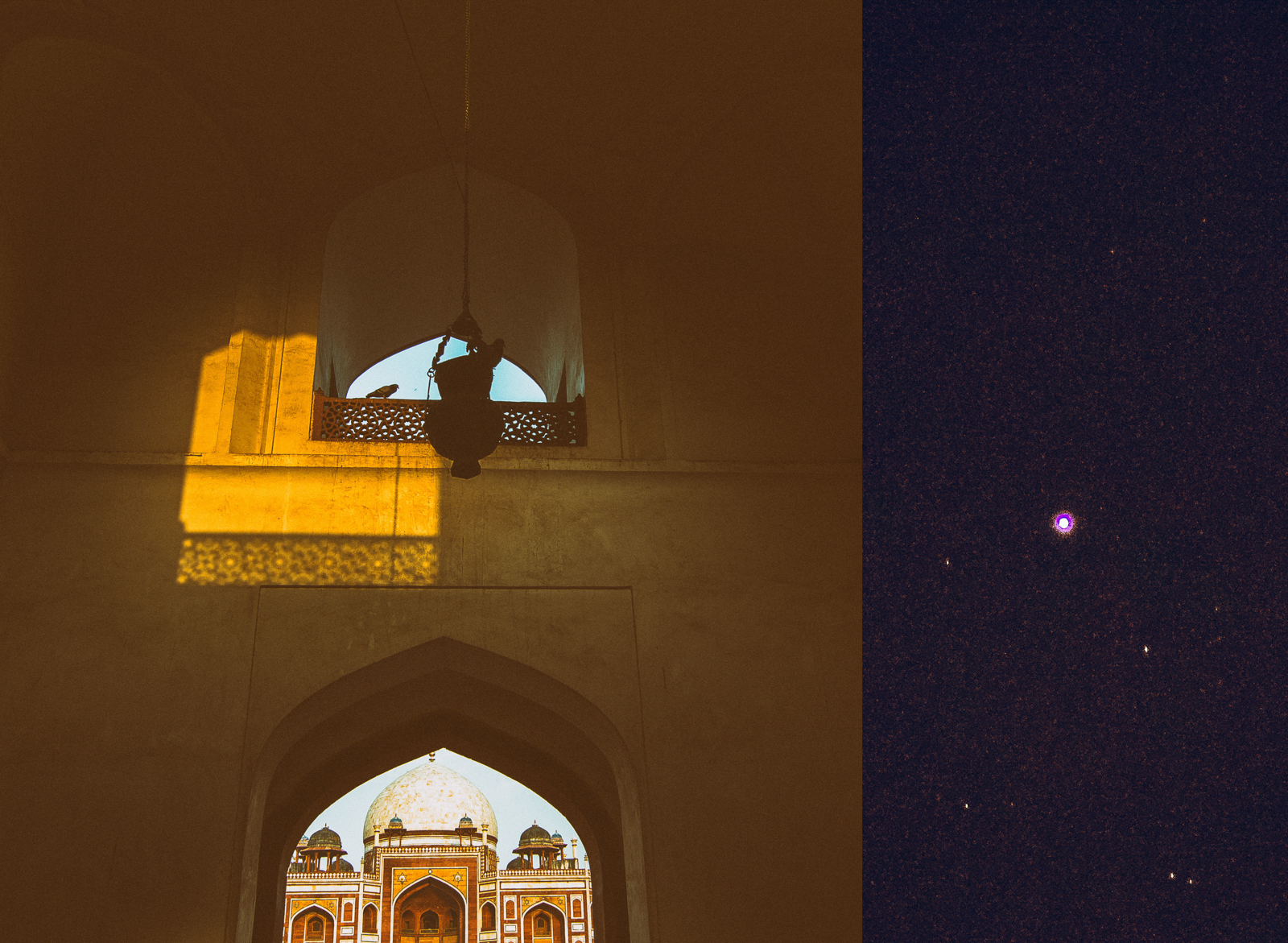 Communal riots are a not a thing of the past, but a constant reminder. In 1993, India saw several riots post the Babri Masjid demolition. Ironically, an Islamic ruler’s tomb – Humayun’s tomb in Delhi- was granted the status of a UNESCO World Heritage site the same year. Through Vega (25 years), which is another member of the summer triangle, the cosmos reminds us of this event. 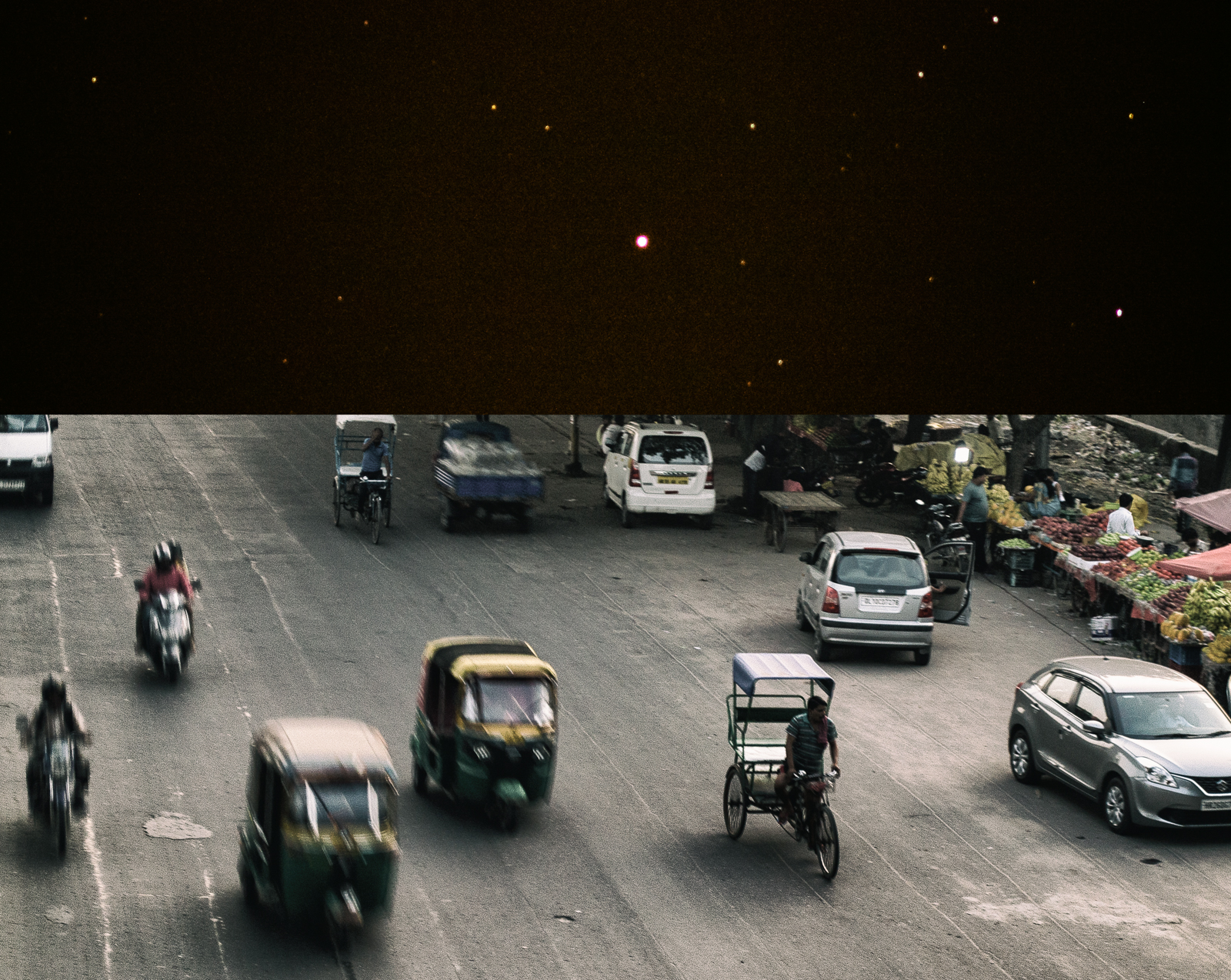 Aldebaran is part of the Taurus constellation, the Bull. It takes us back 65 years. Poverty and migration of labour were exemplified by one Balraj Sahni in ‘Do Bigha Zamin’, released in 1953. This iconic Bollywood film was a true testament of its time. The mechanics of the profession, (a farmer and a rickshaw puller played by Sahni) have changed; but not necessarily the situation.

So, next time do look up to the stars as a reminder…