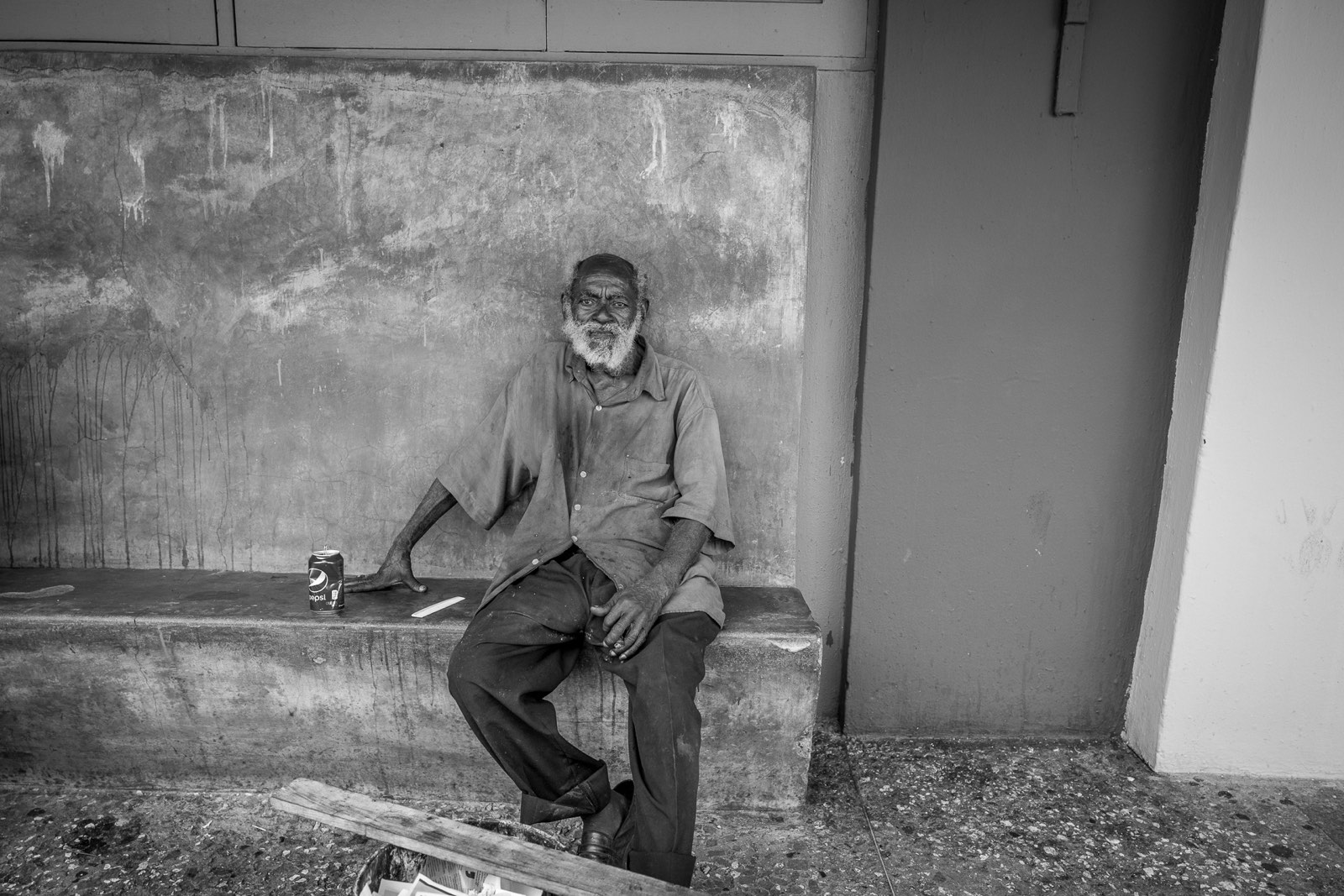 This past Spring I was a student in David Alan Harvey’s San Juan workshop. Earlier in the year, I had the privilege of studying with Bruce Gilden and Peter Turnley. All three photographers have changed the way I work. And though, to paraphrase Steve Biko, “photograph what you like” is a mantra for each of my mentors, their lessons are often contradictory. For example, Gilden’s images are almost exclusively vertical. He is very close to the individuals he photographs. While I’ve never pointed a flash near the faces of people I meet on the street, I almost always positioned myself very close to my subjects. Learning from Bruce put me even closer and I became more effective shooting vertically. 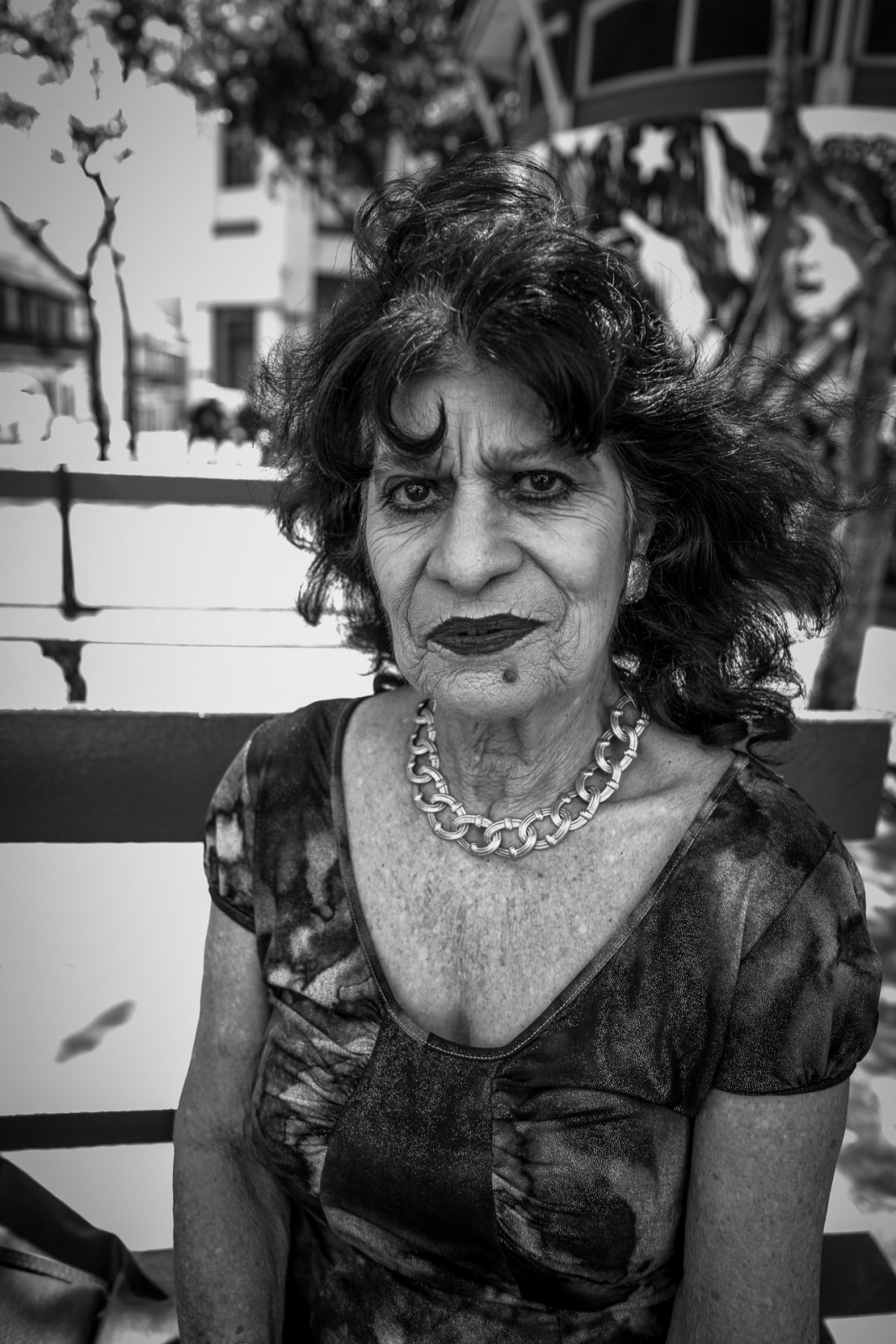 Turnley photographs horizontally and through his workshop in Cuba I saw the environmental possibilities – people in their own setting. Location became more important. I wanted viewers to know that I was photographing Cuban people. 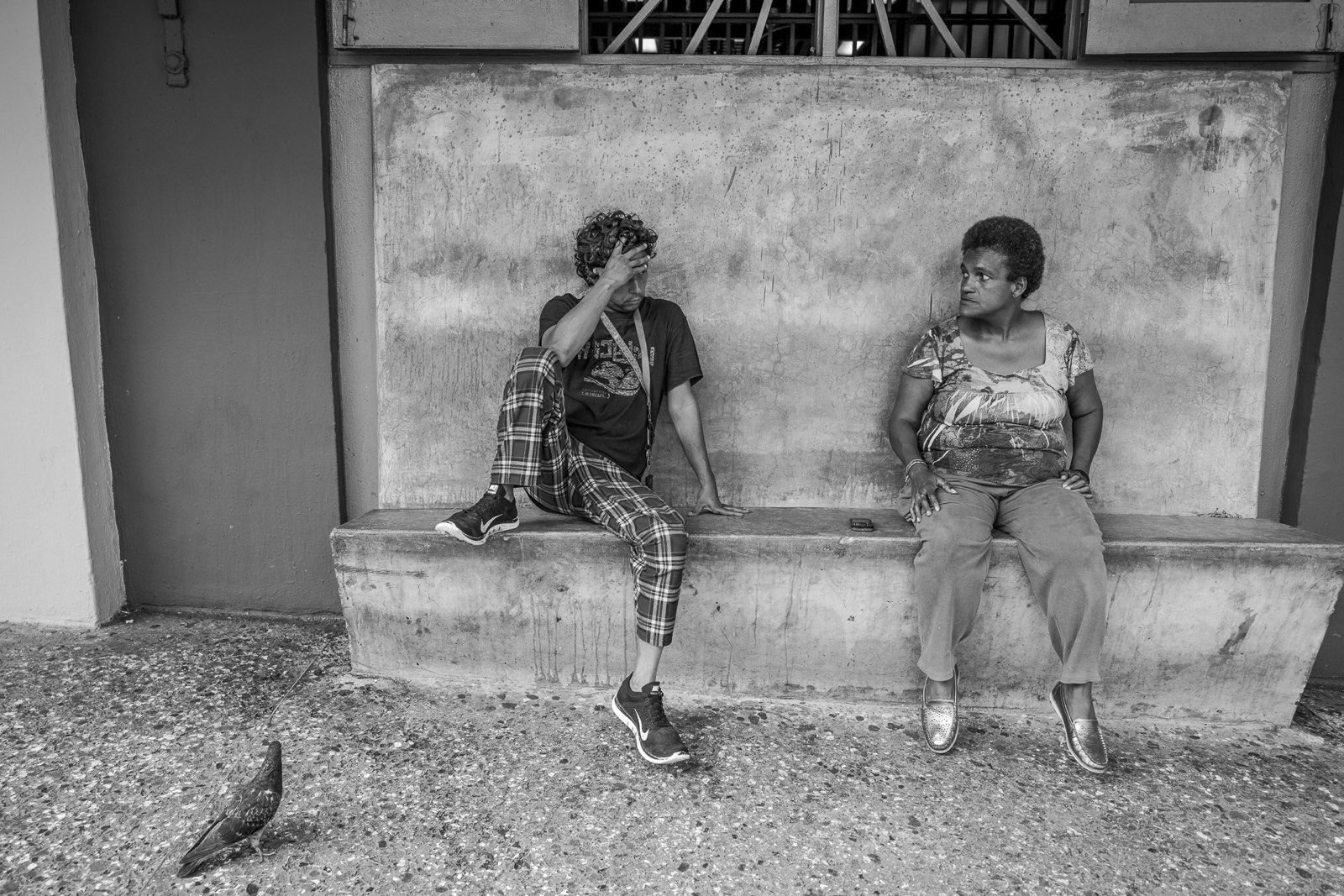 David Alan Harvey shoots both vertically and horizontally. More importantly, he encourages individuals to extend themselves – to search for new adventures photographically. While I’m not sure that I achieved that goal at the time, I was able through photographing and then having conversations with David to conceptualize my ongoing project – “Public Living Rooms.” People throughout the world congregate in various settings spending their days with friends and acquaintances. The “Public Living Room” project has the goal of documenting the phenomena in various settings. 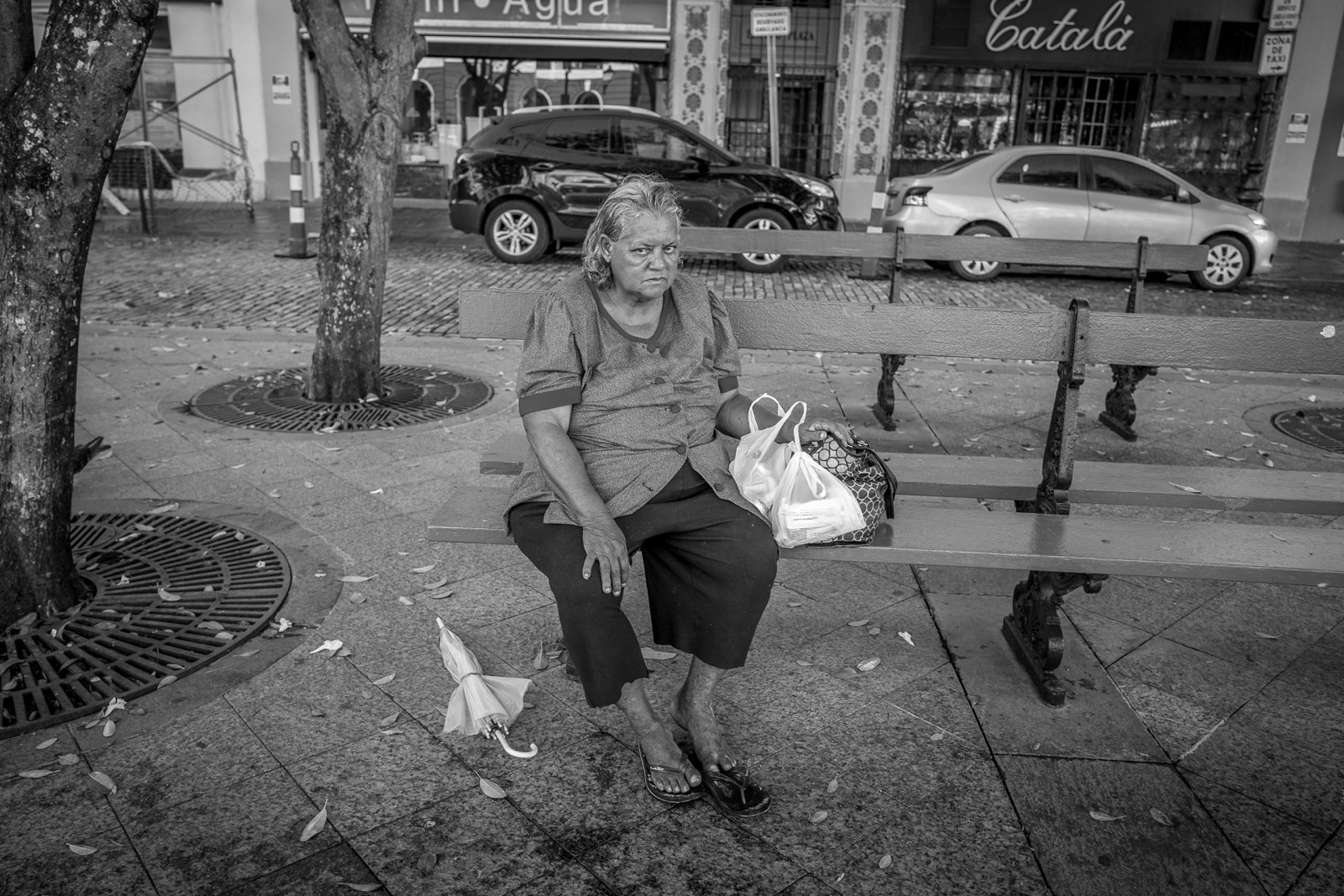 The project began last March in San Juan, Puerto Rico. I photographed at two places during the workshop – Plaza del Armas in Old San Juan and La Placita, in Santurce. Plaza del Armas sits amidst city government buildings in Old San Juan. At one corner is a small Marshalls Department Store. The plaza has two coffee kiosks, one more upscale than the other. People hurry through, but many others appear to spend numerous hours of their days at the Plaza del Armas – thus, “Public Living Rooms.” I observed people walk out of the neighborhood and into the plaza while others departed from the bus early in the morning. These individuals spent their day visiting with friends, drinking coffee or other beverages, and eating as they talked, read newspapers, laughed, and argued. It was their public space. Then sometime between 4 or 4:30 each day they left the park. It was time to return home. 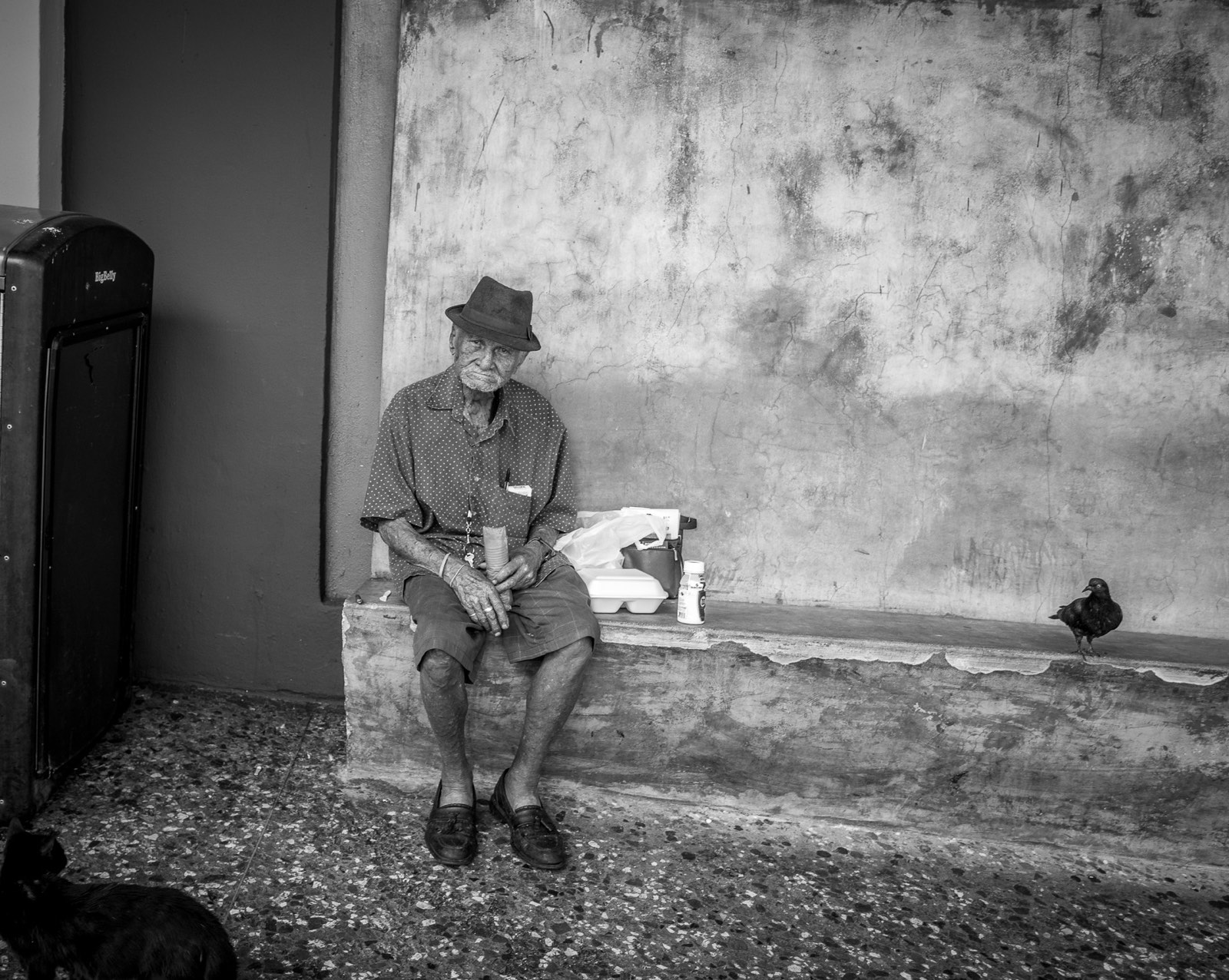 La Placita is a food market by day and discotheque at night. During the day people sit on cement benches with friends and (seemingly foes) imbibing in various beverages, talking about the lottery, debating, scolding, and, of course, laughing. They too appear to view this as their “Public Living Room.” 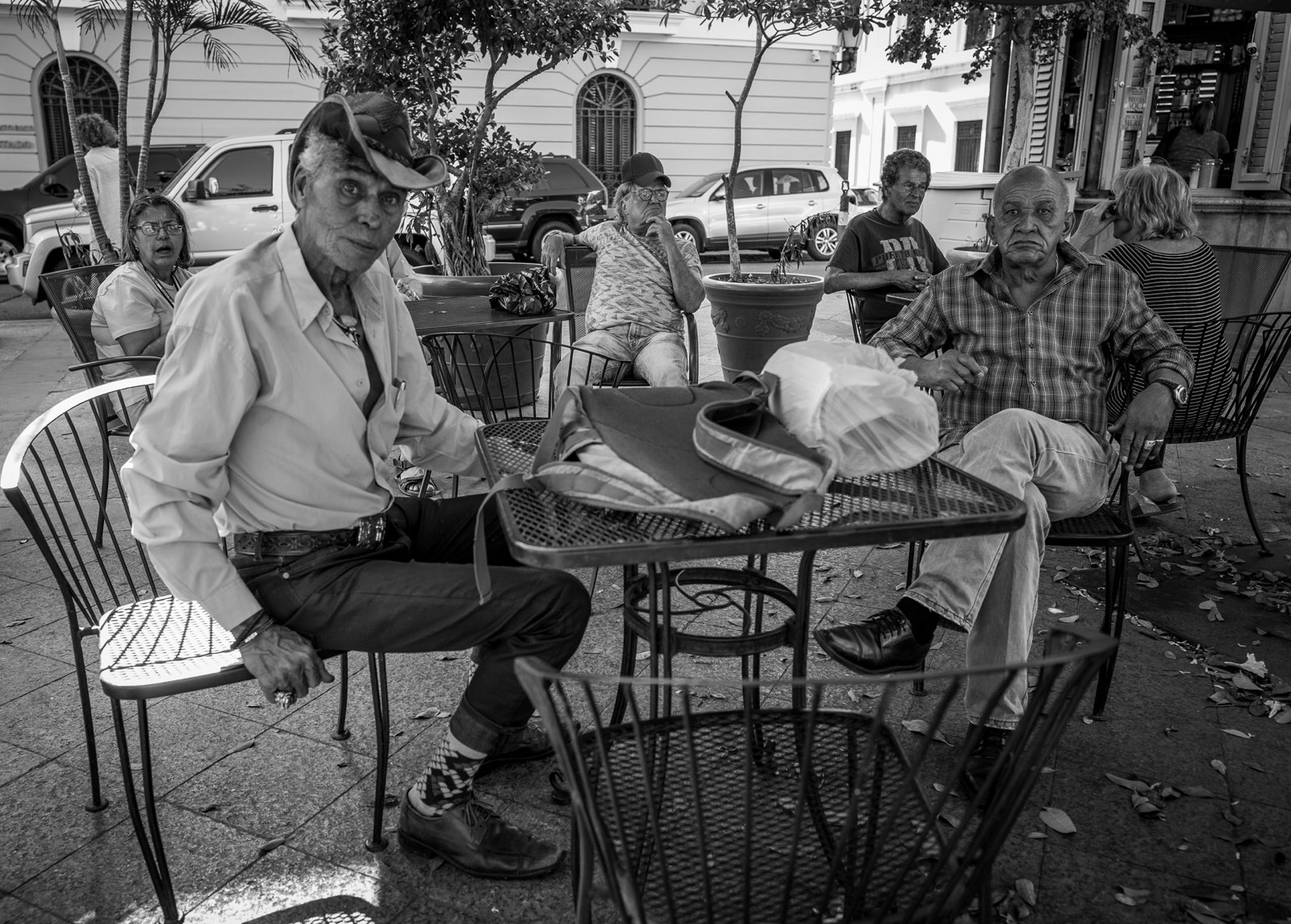 I spent five days making images in San Juan. Each day I began in Old San Juan, spent mid-day hours at La Placita, and then returned to Plaza de Armas in the afternoon. I was privileged to photograph people, often but not always elders, who personalize public space. My goal is that the images tell a story – individually and collectively. The first and last pictures, individual portraits, as well as several of the others speak to hard lives. All the photographs from La Placita have the same background. They were taken on the concrete benches and the individuals are framed against the concrete wall. At both places, there are images of multiple people and in many cases the photographs that I have selected are part of a series. There’s some mystery that can lead to other photo-essays. This was also true at the Plaza. For example, the second photograph is of a mother scolding her son and is one of 8 images of their interaction. The mother received tips from people whose cars she “watched” when they parked at the market. It appeared that her son had infringed on one of her clients? 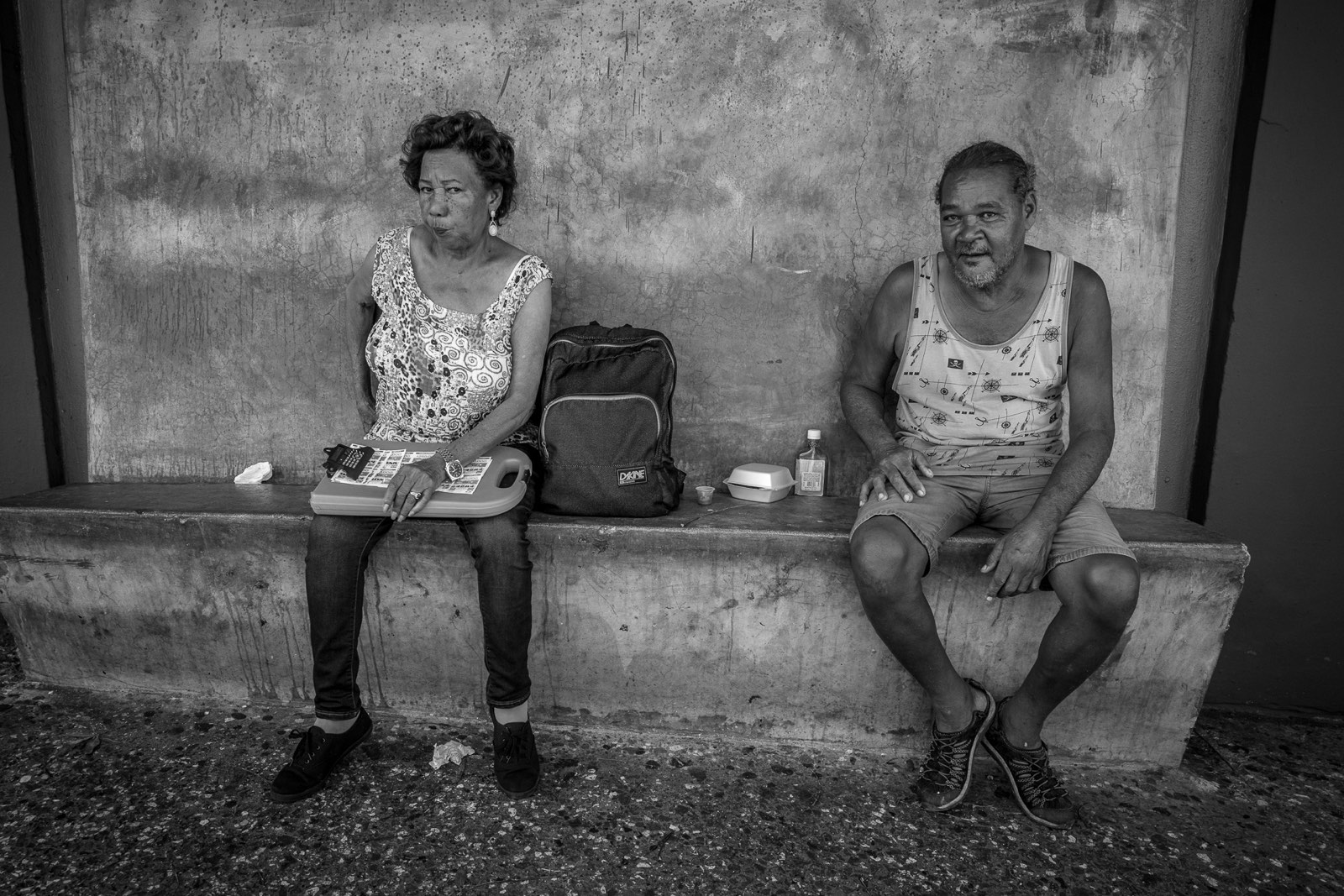 This is an ongoing project that will next focus on Havana. More specifically, I plan to spend a week in December and the entire month of February working in Cuba where public spaces are a way of life. Initially, I will work in Coppelia Park but the project will extend to various other locations in the city. Both Plaza del Armas and La Placita, as well as the places that I will make images in Cuba, represent cultural portraits of public spaces where individuals spend their days. The personalities of people within these public spaces is the focus of this essay as well as my future efforts. 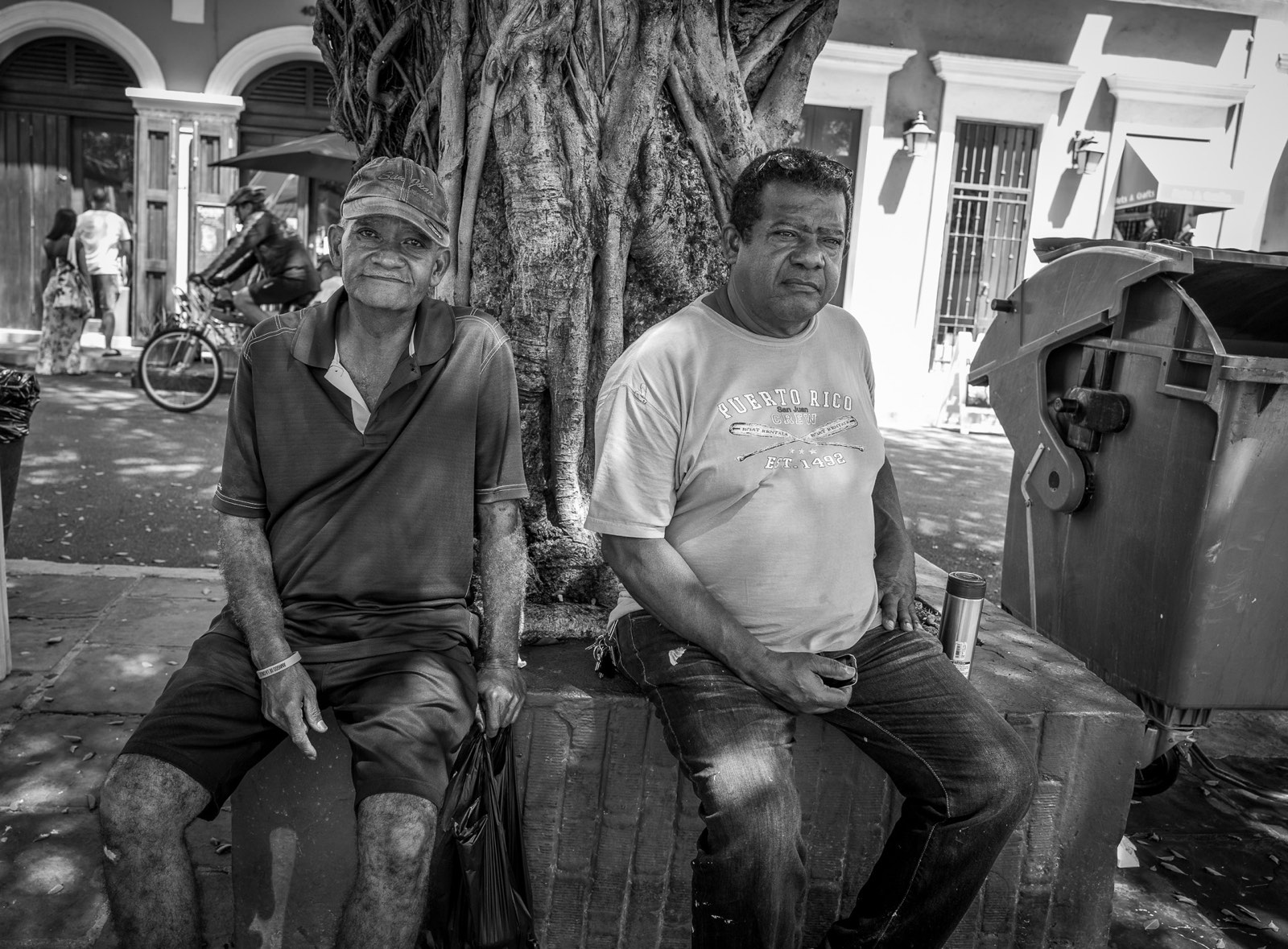 “Public Living Rooms – San Juan” was photographed with a Leica Q. I had tested the camera when a colleague brought it to Cuba in December 2016 and I was immediately sold on the camera. Since I photograph almost exclusively on the streets using a wide-angle lens, the Q appeared to be the perfect camera. It feels like an extension of my hand, has the perfect weight, and has minimal dials and settings – for me the most sensible technological formula. The only deficit is that because it has a fixed 28mm lens, it might not be the best camera for portraits. 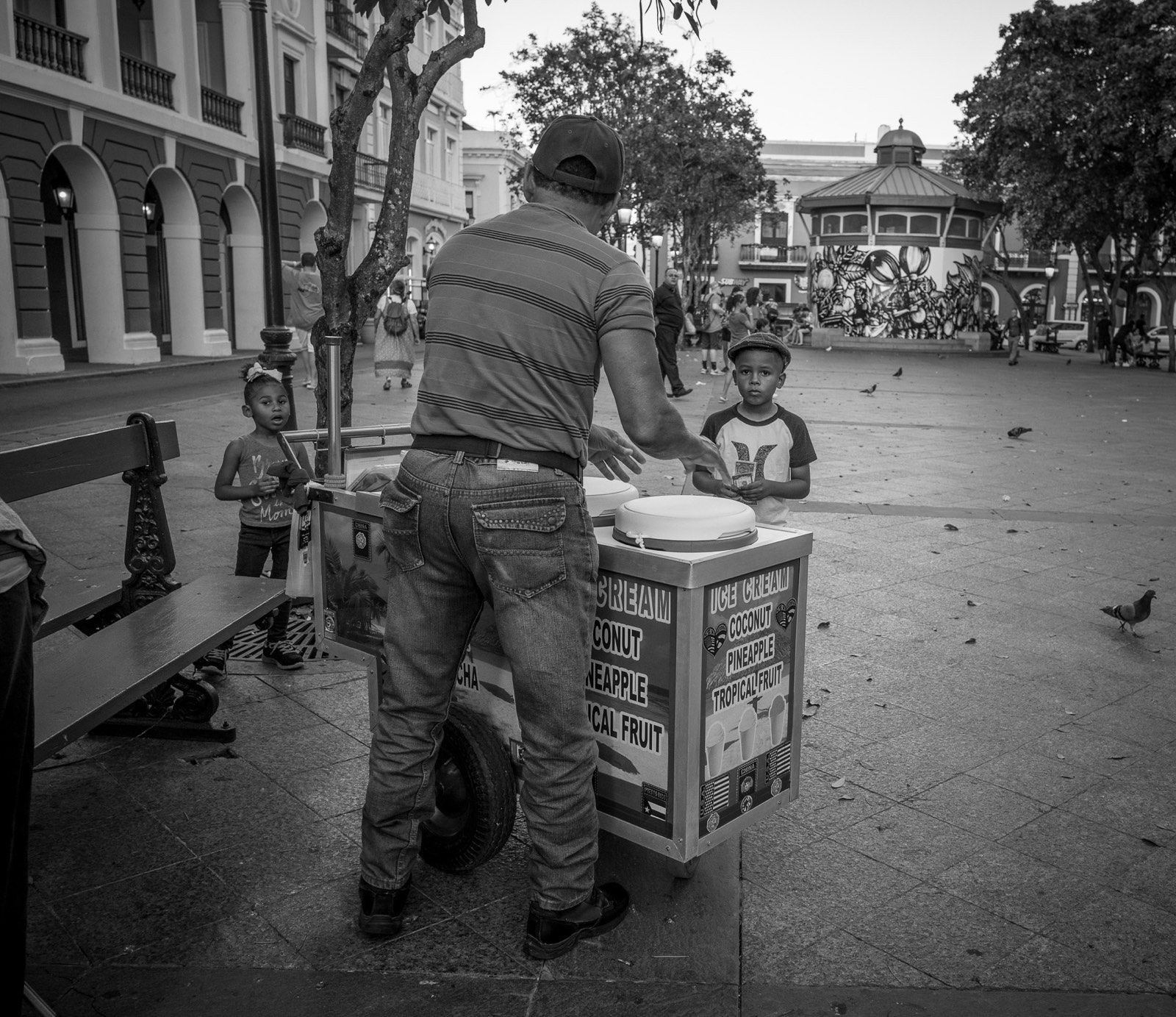 Because of David Alan Harvey’s teaching, and earlier that of Peter Turnley, I have become much more patient as a street photographer. The project nurtured staying in one place and working the settings. This was most true at La Placita. I situated myself around six feet from one of the benches, sat on the edge of a large flower pot, and spent two-plus hours each day photographing the people on the bench. Each person knew what I was doing, yet within a minute their attentions was on friends, not the photographer. In addition, since I’m 68 years old, less walking seems appropriate. 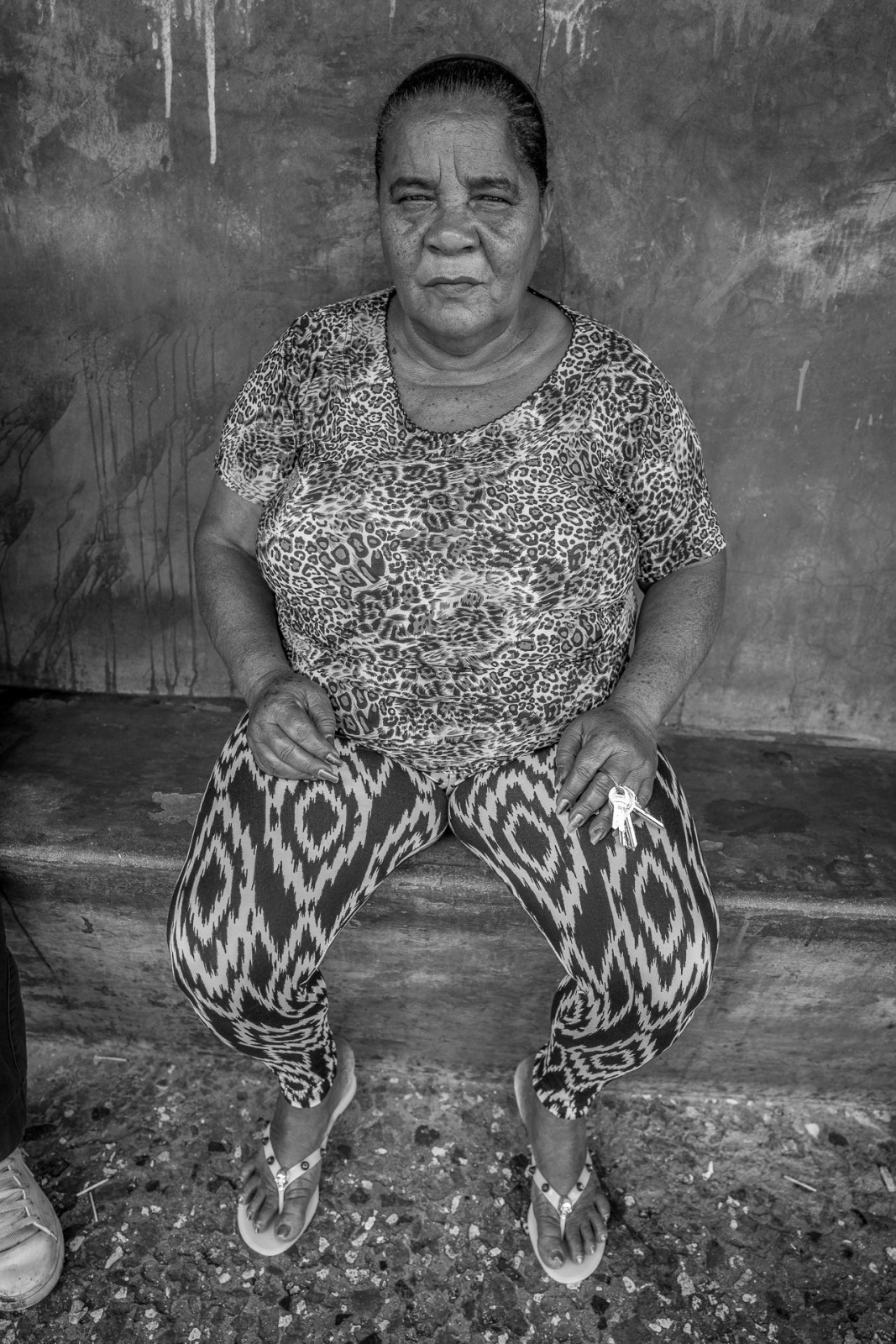