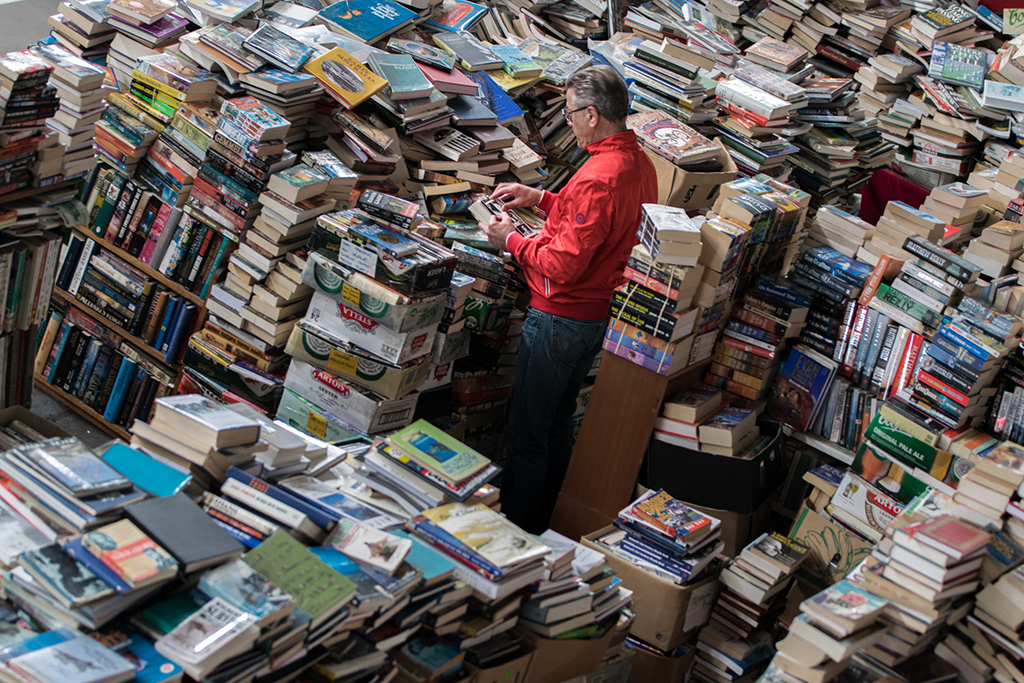 Usually, I hunt the streets for stories mostly on weekends. So my project focuses on capturing casual people in their casual time, in a casual provincial city.

What kind of stories can be found on these streets?

“Oh No!”, for example. Once, I went to a market place where I observed a street musician with a didgeridoo, and passersby in motion. While I waited for people to walk away, two kids ran to the musician’s tipping bag. The younger one tried to grab the coins from the musician “treasure chest”, his brother looked for dad’s help to stop the toddler, and the musician watched this scene in desperation, unable to interrupt his performance. I was so lucky to catch this moment! 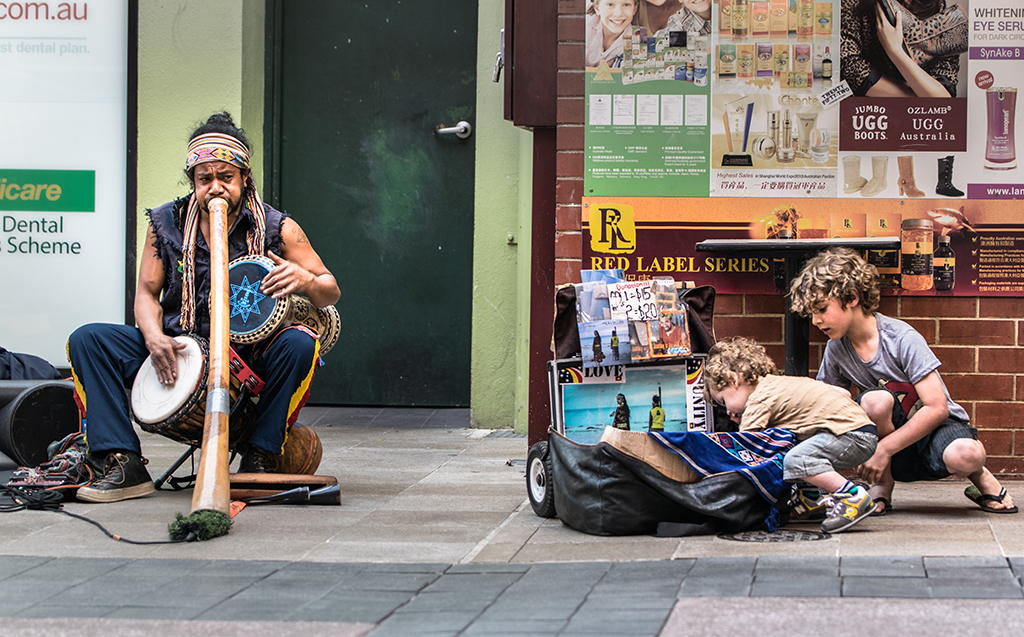 Another time, I was walking near some street food stalls and spotted a lady practicing Pilates on the grass nearby. Bystanders were holding ice creams, hot dogs, and tried not to notice this lady. But one of them was inspired to drop his unfinished food into the rubbish bin. I was not quick enough to catch this moment, but I photographed “Yoga Benefits” instead. 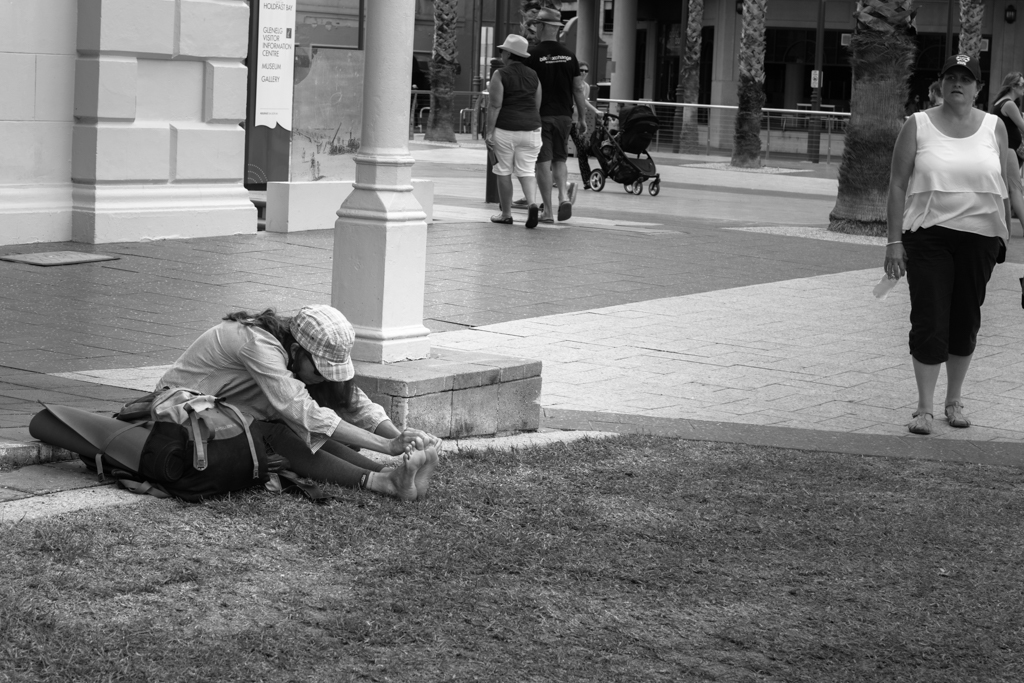 So many stories are waiting to be photographed on casual streets in a casual provincial city.

I don’t think that I’m a photographer with style. I like to take photos of nature, landscape, macro, portrait etc. I photograph everything that touches my heart. But street photography is very special for me. It easily fit my undefined “style”.
It all started accidentally, I bought a Nikon in 2014 and went to Nepal for a group photography master-class. The master concentrated on the landscape and nature genres. But he occasionally took us to the streets. At that time I considered myself as newbie landscape photographer, but all of sudden I understood that I enjoyed street photography and walking streets became very special for me. So, when I came home to Australia, I started exploring the streets.

But physiologically it wasn’t easy. In Nepal, people are almost living on the streets. And there are lots of tourists who are passing by and taking photos of exotic ancient culture. Nepalese people are not surprised when being photographed. So, it was quite easy; walking with the group of other photographers, taking photos of people, who were actually ready to be photographed. I felt brave and encouraged. But after the tour in Nepal finished, I came to Adelaide, my hometown, and I was scared. I started to read lots of advice from experienced masters, tried them, and adjusted their experience to myself.

I believe I have found the most comfortable way for me to shoot streets in western cities.

How do I do this?

– When I see a situation or an object (which I call stories), that touches my heart, I take a shot. I’m not hiding my camera and not turning around from the subject, but just continue to shoot (or, sometimes, pretend to shoot), even if a situation has changed and my object is gone. This somehow smoothes my awkwardness, calms people who are in my view, and I guess it makes me appear as a tourist, in their eyes.

I’ve met so many great people, who smiled back at me and even tried to help: either modelling for me, or hurrying away from my camera when they think that they are in my way. My photo “And Guess What?” developed from the public’s desire to model for me. I spotted a gentleman sitting on the bench, with his dog sneaking around. The gentleman noticed me taking a photo of him and started to talk to the dog. The dog jumped on the bench and barked in answer. It looked like a real conversation, the dog responding to his master. Thank you, stranger, you and your little friend made me happy that day! 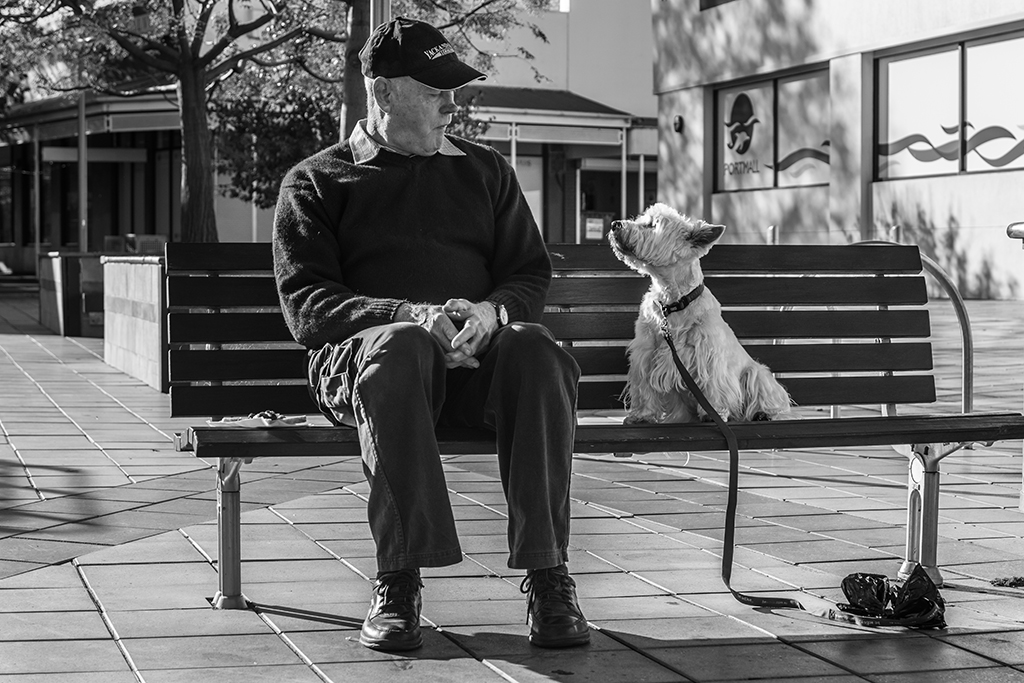 One day I photographed water slides. When I posted this picture on 500px, I received a comment that this shot can be made even more impressive and how to improve it. So I went to these water slides again, but this time the sky was blank and the shot was not much better. So I went there again, and again no luck. And again, and again.

Every time something was not quite right with the slides, but at the same time, while I was walking to and from these slides, I was lucky to shoot a street story. One time I spotted “Hypnosis”, next time – “17” and so on. There are so many stories waiting to be photographed! 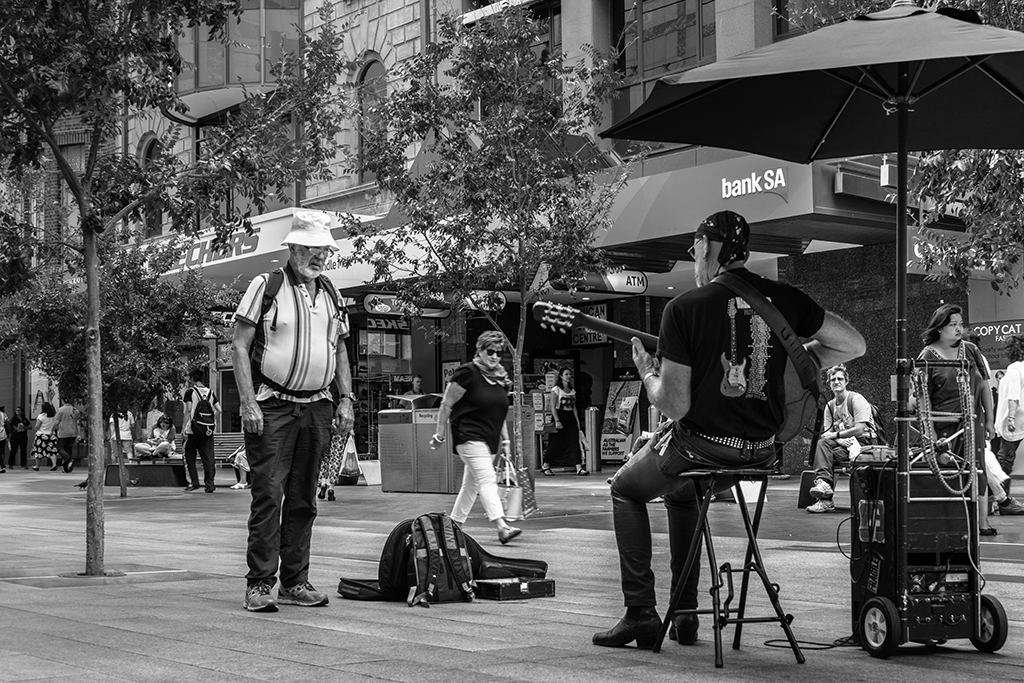 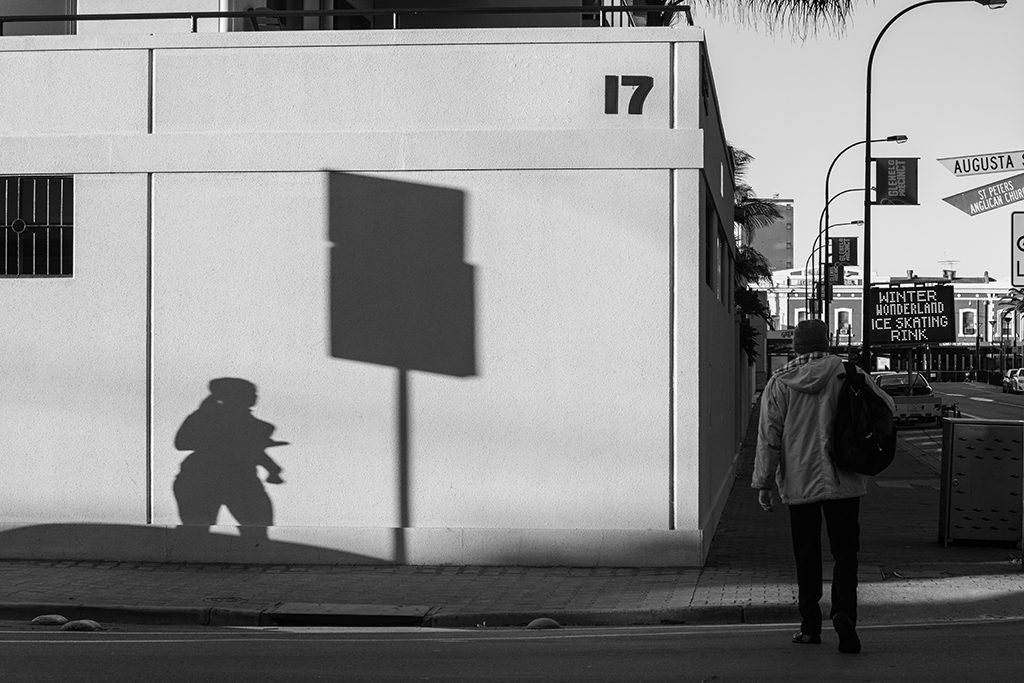 I hate waking up in the mornings, but I’m so lucky to have a very responsible cat. Yes! My cat can be very responsible. On weekends, when I don’t turn on an alarm clock, in hopes of sleeping longer, my cat wakes me up at the usual morning time, at 6am. Urrr.. So, I cannot sleep, and I explore the morning streets. And I never regret this choice, never. Thank you Mister Dandy Cat, – I like the beautiful light and long shadows, uncrowded streets, relaxed people, and friendly dogs. When the streets are not crowded, there are so many opportunities to play with the reflections in shop windows. It looks like a different world, a parallel world, a world in a different dimension, a world through the looking glass. I think I will make my next project about street reflections. And I think this project has started already. 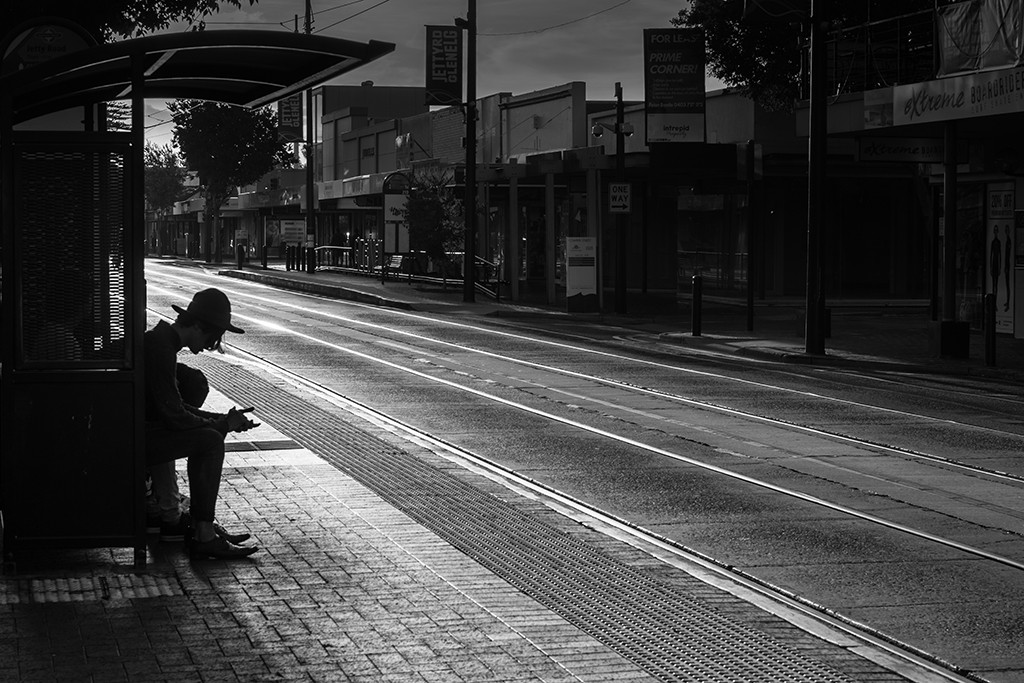 Well, I have to confess, that I started my photography journey with a compact digital camera, a simple point-and-shoot. This was during my participation in a visual poetry project. In this project, I chose and visualized a number of Michael Baru Haiku poems. Since this experience, I easily can see haiku in everyday life. When I see it, I shoot it. This haiku-style photography still attracts me and every time I see “haiku” on streets, I try to capture it. One early, rainy morning, I spotted a coffee cup, full of rain on the table of a street cafe. The goal was a coffee cup and walking people on the rainy street (I thought a bit of motion will make the image more interesting). I did not achieve this goal unfortunately, and will try again one day. But! All of sudden I heard a question:

– “Are you photographing weird things?” – an old gentleman in a cafe asked me.
– “Well, it depends on what you call weird.”
– “I’m weird. Hi, I’m weird Garry” – the old gentleman smiles to me.
And I took photos of Weird Garry. He was really helpful for me to understand that it’s not scary to be a street photographer.