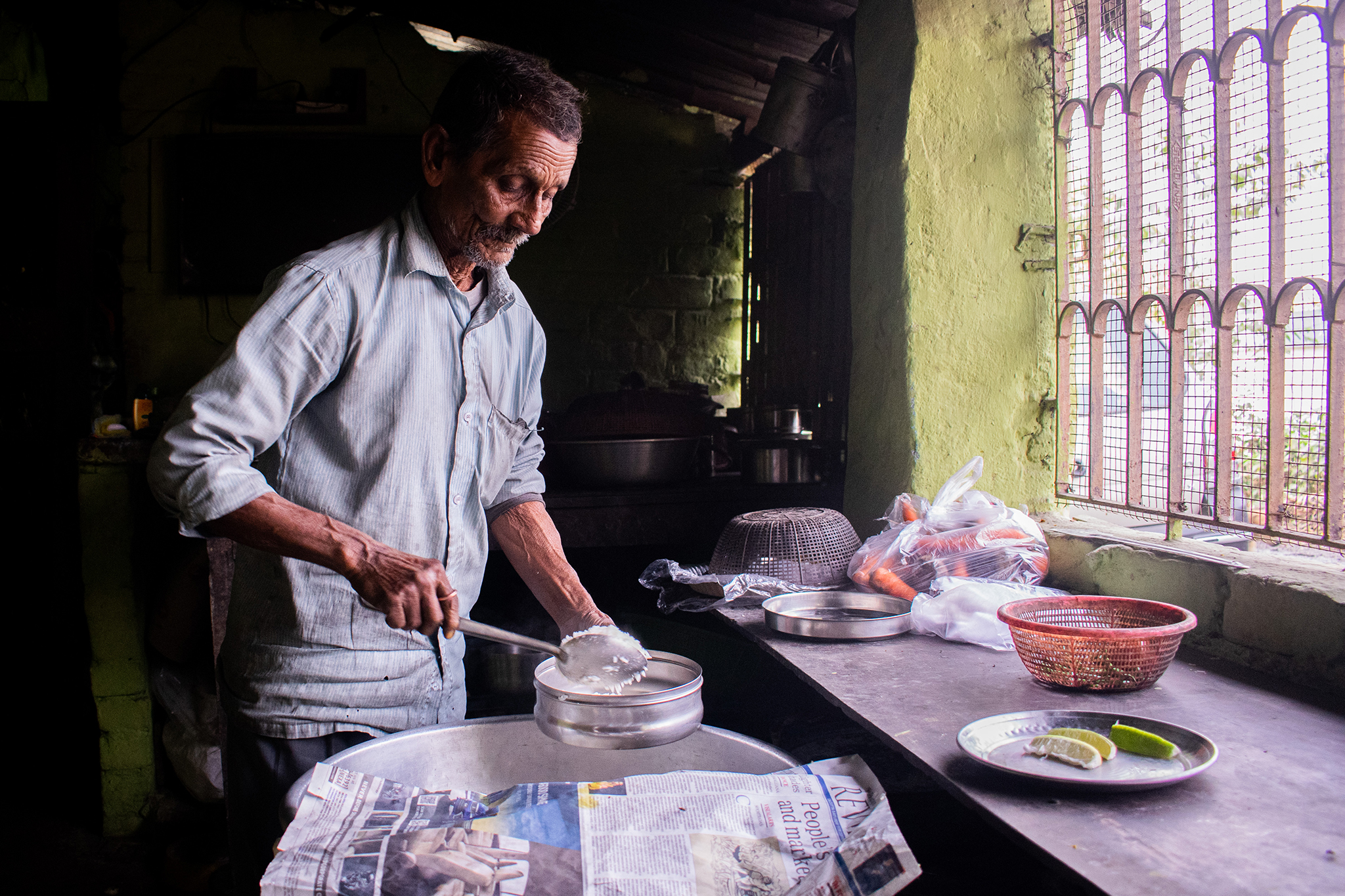 This is a piece of work dedicated to telling the stories of persons with whom we engage every day but still don’t care to know about.

Pashupatinath Prasad Chaurasia is a 65-year-old man who came to West Bengal for work 21 years ago from the Siwan district of Bihar. Due to a political situation, he lost his job and started a small sattu shop in the station area of Kalyani (a small town in West Bengal) in 2004. He lives in Bijaynagar, Kalyani with his wife, son, daughter-in-law and two grandsons. He had a permanent shop there but the municipality removed it promising him to give a shop in the main bazaar, which he never received. Thus, he bought a thela (the Bengali word for cart). It cost around 8,000 to 9,000 rupees (Rs) when he started his business and at that time he could sell sattu for just 2 Rs per glass. Now, he charges 10 Rs per glass, since the cost of chana has increased from 16 Rs to 62 Rs per kilogram. He serves two drinks: sattu mold and sattu ghol (sattu whey), which he prepares according to each customer’s preference. He uses chilies, lemon, chutney, and onions to make the ghol.

Conditions are much worse for him now, as his sales have decreased. Before lockdown, he used to sell 300-500 Rs of sattu per day, but now he only makes 100-200 Rs each day, meaning there is no chance of profit and he is getting spending more than he makes. On top of that, the municipality has provided a shop to everyone else in the area except Pashupatinath, even though he has a notarized paper from councilor. They know he can’t do anything about it because he is old, weak and a non-Bengali. When he questions the authority, either he is left unheard or asked for caste documents, which he cannot provide. His son is jobless due to the lockdown. He used to work as a driver before but since less drivers are needed now, there is little or no work. He has a bank account where he can’t save any money but can only keep the minimum amount to keep the account running.

The new government has also not done anything for him. At his age, he should be receiving a retirement allowance of 1000 Rs, which he has not received, and when then local authorities come, they throw away his things asking him not to put up his thela there. He is helpless and is accustomed to such a situation. He says, “We are bound to get nothing, whichever government comes in power, we have to stay like this” He still sits at the same place in the station area from 8am to 1pm every day. One can easily visit him and get a refreshing sattu drink from him or savor on sattu mold.

Ramesh Das is the owner of a 30 year old meal shop, which still provides a good quality meal at a cheaper cost than other similar hotels. Now 70 years old, Ramesh Das started this shop when the Indian Oil factory was first established in the outskirts of Kalyani. Initially, it was a small makeshift cycle repair/tea shop but now it’s a permanent hotel where the workers of the factory, drivers, and other local people can have breakfast, lunch and dinner.

The shop opens every day at 5 am and the preparation of the day starts around 9 am. Ramesh Das does the entirety of the cooking with the help of his wife. His house nearby, where five of his other family members stay while he and his wife work in the shop. During breakfast, he serves roti and sabzi (curry). During lunch hour, which starts at 1 pm, many workers, drivers, and other locals come to eat. The shop offers up regular meals, including rice, dal, sabzi along with fish and egg curry, costing between 40-50 Rs. At the time of writing, chicken meals were only available on-demand due to the pandemic lockdown. At dinner, one can have roti, rice, and curry depending on the customer. Tea is available all day long along with bread and cakes.

The shop also used to provide home delivery to a few local homes and the L&T factory, but after on of their sons had an accident and due to lockdown Ramesh Das has stopped that. The current situation has worsened things for them as the price of many items has increased a lot and if he is not able to open shop for one day it is a huge loss for him. The family was supposed to get a BPL (Below Poverty Line) card but the government made them an APL (Above Poverty Line) card, due to which they have to buy rice and wheat. He has no faith in the government and now they are accustomed to such a situation. In fact it’s only due to the location of the shop being on the outskirts of town he is not getting bashed by police. Otherwise, they may have had to close the shop permanently during this time.

Ramesh Das is happy to run this meal shop along with his wife and expects to do so for another 30 years. He is proud of the work he does and loves this place and doesn’t want to change the location as he is very popular in the locality and the people of the area respect him very much.

Ratan Sarkar is a man with many feathers in his cap. He came to India as a child in 1976 from Bangladesh and started living in his aunt’s place, Chakdaha (a small town in West Bengal). After a few years, he bought his land in Anandanagar, Kalyani and moved there with his parents, wife, and two children. It’s been 27 years since he arrived here and selling tea is not his first job. He started his journey as a bicycle repairer and then went to Mumbai to work in power loom. After a couple of years he shifted his focus to carpentry and polishing and from there to a centering job. He worked mostly as a laborer in a centering job but due to his age (he is now 52), he stopped doing that and started a tea stall. He is a restless person and couldn’t settle himself into one career before marriage so he changed his job many times. Once he mastered a job, he moved on to start another.

He bought his thela (the Bengali word for cart) by taking out a loan of 27,000 Rs just a few months before the lockdown was announced. Due to his misfortune, he again had to sit at home eating his savings and finding a new job. But now, as many restrictions are lifted he opens his shop daily around 7 am and works until the FCI (Food Corp. of India) factory closes at 8 pm. His main customers are the FCI workers, hospital people, and pedestrians. He serves two types of tea: milk tea (5 Rs) and black tea (4 Rs) along with varieties of biscuits, cakes, laddoos, and egg toast. His daily earning varies, but due to COVID his earnings have decreased significantly. Before, he could earn 1,600 Rs each day and now he earns less than half that amount. The main thing is that he was too was denied government support. His family was promised permanent housing for which a meeting was held, but later it was not provided and he wasn’t even given any monetary support so now he is left with debt.

He has accepted his fate and has now finally settled himself. He is satisfied with what he has and only thinks of ways how to expand this business and how to keep his family well. His children are reading in primary schools while his father also works to earn whatever he can and according to him, they are good. Ratan Sarkar wants to continue the rest of his life like this.

This series only depicts the life of three “Stallwarts”. I feel that every person has a unique story to tell. Maybe what I have covered is just a glimpse of their entire life. We see all three have struggled a lot to come to place where they stand now. We may not be able to imagine ourselves in their place, but they are contented with what they are doing and will continue on. This series is far from over.