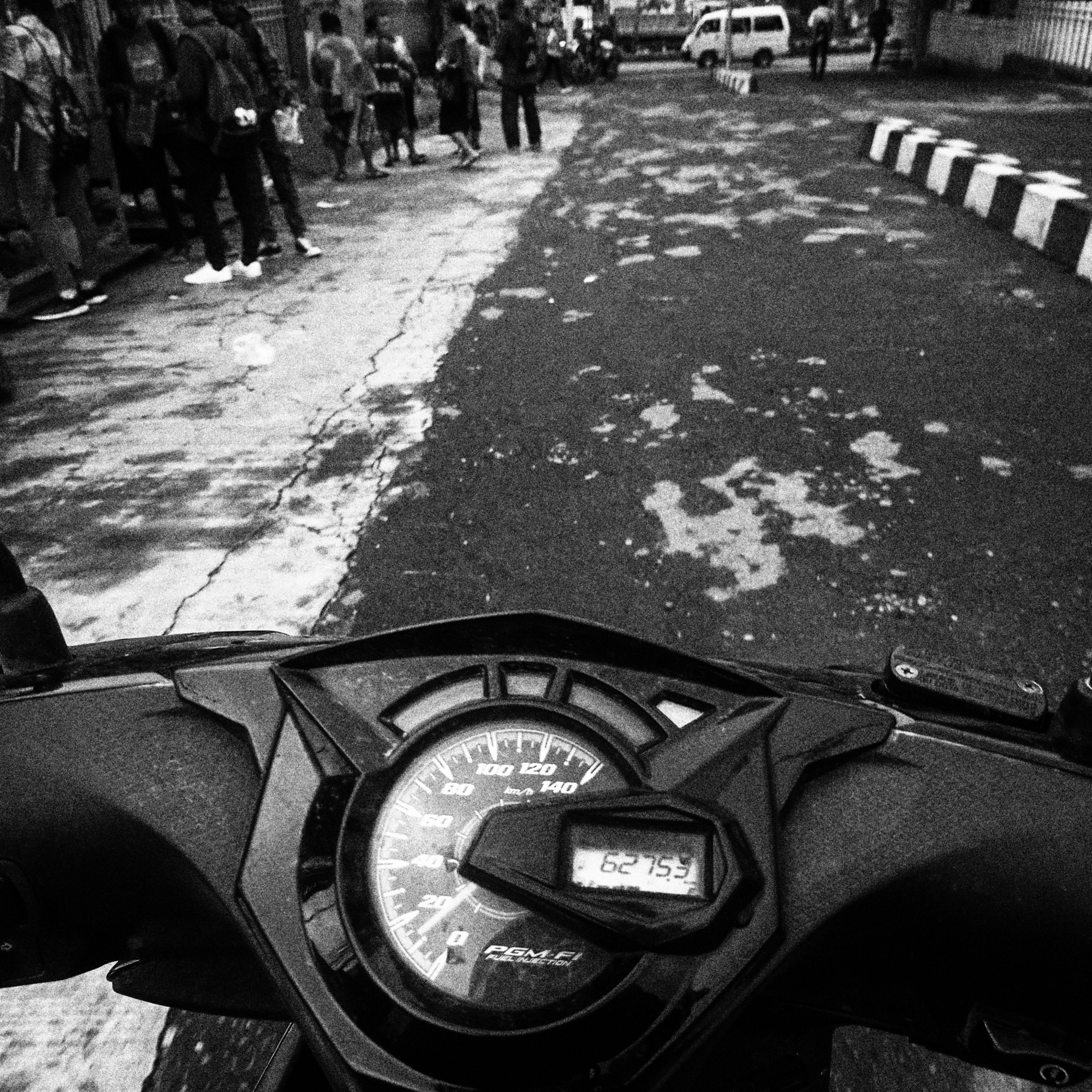 The trip to my workplace in Jayapura from my rented house in Keerom is a relatively far one. Let’s just say, when I check the odometer on my bike, on average it takes about 80-100 kilometers, depending on the route I take, which is about 3-4 hours time. But it isn’t only about distance. As I regularly take the trips, I slowly understand things that explain why this trip makes me feel exhausted and what makes this road feel different. I am talking about a gradual change of the road itself, the difference from a Jayapura’s capital to its peripheral areas like Keerom, which is under a different administration.

But enough words, let’s see the photographs I take on my commute from home to work. Really, this Per/5 project is just a way to kill my boredom during the trip. I take one or two photos every 5 Km during the trip, mainly of the road and its surroundings. Later, I select a few that I think are good enough and edit with strong B&W contrast. All photos were taken using my trusty phone camera, the gorgeous Xiaomi Note 9.

I left my workplace around 15:20 and went to my friend’s place to pick up some coffee I ordered the day before. While there, we had a short chat and then I started my trip around 16:10. Read and see the rest of the story below.

Things I Learned from this Trip

Take a closer look at the first 10 photos. Believe it or not, I did this section on my bike in these 10 photos in just about 40 minutes. I know this because when I ride I listen to music, and when I took photos 1-10, I listened to Dream Theater Octavirum Orchestra which is 28 minutes long, followed by the Metropolis from the same band which is about 10 minutes long. I arriveded at photo number 10 after listening to a third song, this time by Efek Rumah Kaca called “Banyak Asap Di Sana,” which makes for another four or five minutes. The tenth photo was at the gate of an area called Arso 7 – a gate to the transmigrants location in Keerom.

In the photos above you can see that the road in Arso is made from thin asphalt or dirt, and sometimes concrete (but just a couple of kilometers). Somehow this affects my mood when riding. If we take a trip from anywhere to our house, we feel a hurriedness grasp our mind and shoulders as the distance to home gets shorter. Frrom Jayapura to Arso 7, I feel nothing. I just enjoy the music, wind, and landscape. But soon as I get closer to Arso 7 or Arso 12, the hurriedness takes over. Often, I recklessly ride the bike through the potholes with no care at all. And I’m not the only one, many other riders and drivers feel the same way.

Last month, I went to Jayapura with my family by renting car (and it’s super expensive around 700,000 IDR per trip). The driver said to me in his mixed Java language :

“Kabeh wong liwat sini tu mesti buru – buru Mas. Kae delengen, trabas sana trabas sini. Orang wis kesel, pengen cepat balik omah leren, parah e kan dalan cedak omah sing akeh rusak, jadine bukan tambah cepat sampai malah tambah kesel,” which means, “Everyone who passes here is in a hurry Mas. See that, they cut each other off all over. People are tired, they want to go home quickly, but the worst thing is that the road near their house is a road that has a lot of damage. It’s not getting them home faster just even more tired.”

If I am not mistaken, from what I read in the Anna Tsing (2013) paper about frontier areas, time and space are kind of chaotic in some ways. I feel terribly dumb because I read that paper years ago in 2013 yet I’ve begun to really understand it just now. Well, the old saying “experience is the best teacher” is sometimes true (if not always?). That’s ok for me, at least I understand it through my firsthand experience. But it left me with a spooky thought that if the road, landscape, and others are already constructed, defined, altered, and reconfigured by humans, what is the reality itself?

B. Roads as Symbols

The first is development. Facilities, access, and many things are better in the city (obviously!) but it is a bit ironic if I step back a little and begin to see that many if not all of the resources they use to develop and build the city are extracted from the so-called backward, undeveloped areas just like Keerom. Keerom is defined by the government as a 3T area that needs to be “developed” so that its people can gain economic benefit and, in the end, a better quality of life. And yeah, that’s the argument and the holy purpose of the development program at least. But the reality is that asphalt in Keerom compared to Jayapura, is thinner. What does that even mean? Well, that asphalt didn’t walk by itself and lay itself in the dirt to form a road so you know where I’m going with this.

The second is the quality of life and its vulnerable state. Take a look at the photo of the bridge over Skanto river. This road connects Jayapura and many Kampung and regions around it. If something happens to that bridge, that’s it. Many people will be affected in many ways. In today’s world, we rely on things like this kind of structure and infrastructure, it’s part of our lives. How does it affect our quality of life? Things are relatively better on a smooth silky asphalt road rather than a dirt potholed road and all of that is related to access (see Ribot and Peluso, 2020).

I remember when my son and wife got sick with Malaria and their fever was up to 40 degrees celsius. At that exact time, I felt worried of course. Not only because there are limited health facilities in our Kampung, but also because I was in a different province. Even if I could go back and rescue them by taking them to access health facilities in Jayapura the trip would make it impossible, not to mention the cost of around 10 million IDR, which is much too high. Fortunately, there was a local Bidan (midwife) to take care of them.

But there are many unfortunate stories from villagers here: Si Budhe who was bitten by a snake, Si Kaka who had an accident in a field, Si Mama who got a serious case of Malaria. All of this is related to access and it surely has implications for their quality of life in so many ways.

And that is what I can write for now. I leave it here so that I can rethink this in the future. Who knows? It might be useful someday.