Before we start, I’d like to thank you Bob, and Street Photography Magazine, for the chance to talk about my work and myself. I am a very private person, so I’m not one to talk about myself . So, let’s begin with Hello, my name is Mitchell Hartman, I was born in Brooklyn, but currently live in Queens, New York. 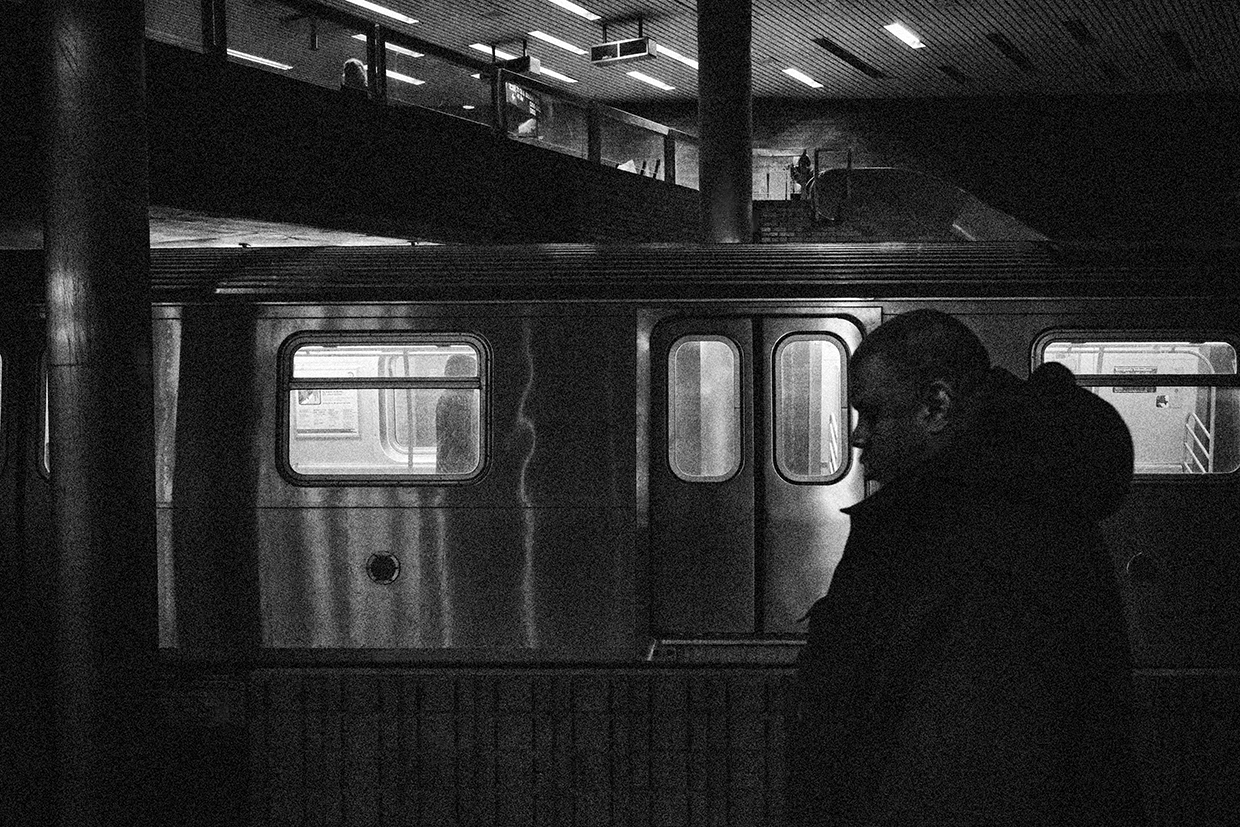 I didn’t get into photography until after college. I graduated from The School of Visual Arts with a BFA degree in cartooning /illustration; and my first job after graduation was for an advertising retouching studio in Manhattan ( I still work in advertisement as a retoucher), where the main retoucher, or the person training us “apprentices” had been a commercial/studio photographer for Fischer Radio and asked me if I would be interested in learning photography. I had taken a basic photography course at SVA,  but this gentleman got together every Saturday,  on what was then Camera Row in NYC, with four other “photographers” and he asked me if was interested in joining them and learning photography. It was a wonderful experience, and one that I am very grateful for, as these five photographers each week would give me a lens, or a formula, or certain developing paper and I would use what they gave me that week and bring it to them for critiquing. That training went on for 3 years, all through the kindness of their hearts they took me under their wings and trained me to be a photographer. 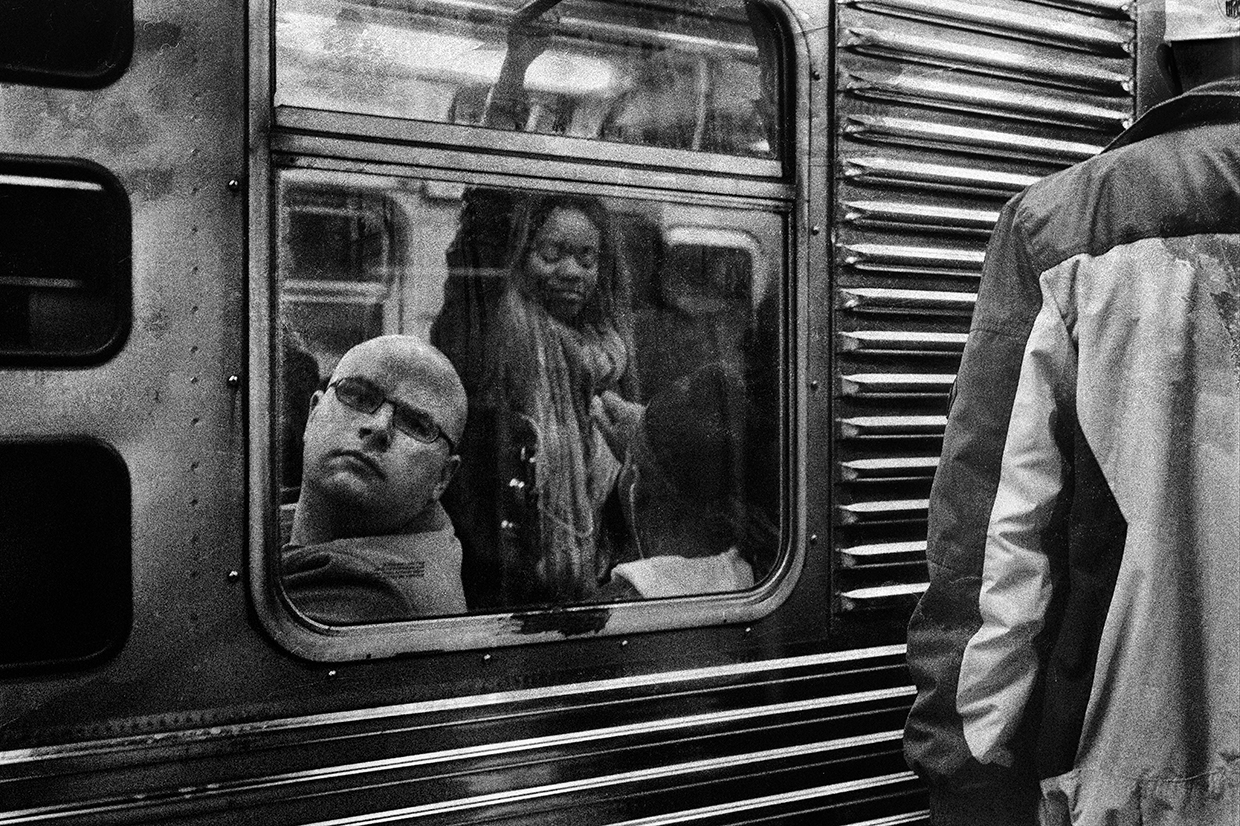 Of course, being a conventional retoucher (before Photoshop) , I got to not only play in the darkroom, but I also got to look at a lot of photography and learn what some photographers were doing and how they accomplished it.

My current series is “Passengers”  which is a modern exploration of daily life in NYC and presents to the viewer what is unique about the city. It is an ongoing series as New York City is always in flux. The NYC subway system is—both literally and metaphorically—the nervous system of New York. For most New Yorkers, the transit system defines the contours of their lives; it knits together their daily parts, and conditions their sensibilities, with smiles, anguish, music listening, and queries of direction. Nowhere else do people spend so much time underground. 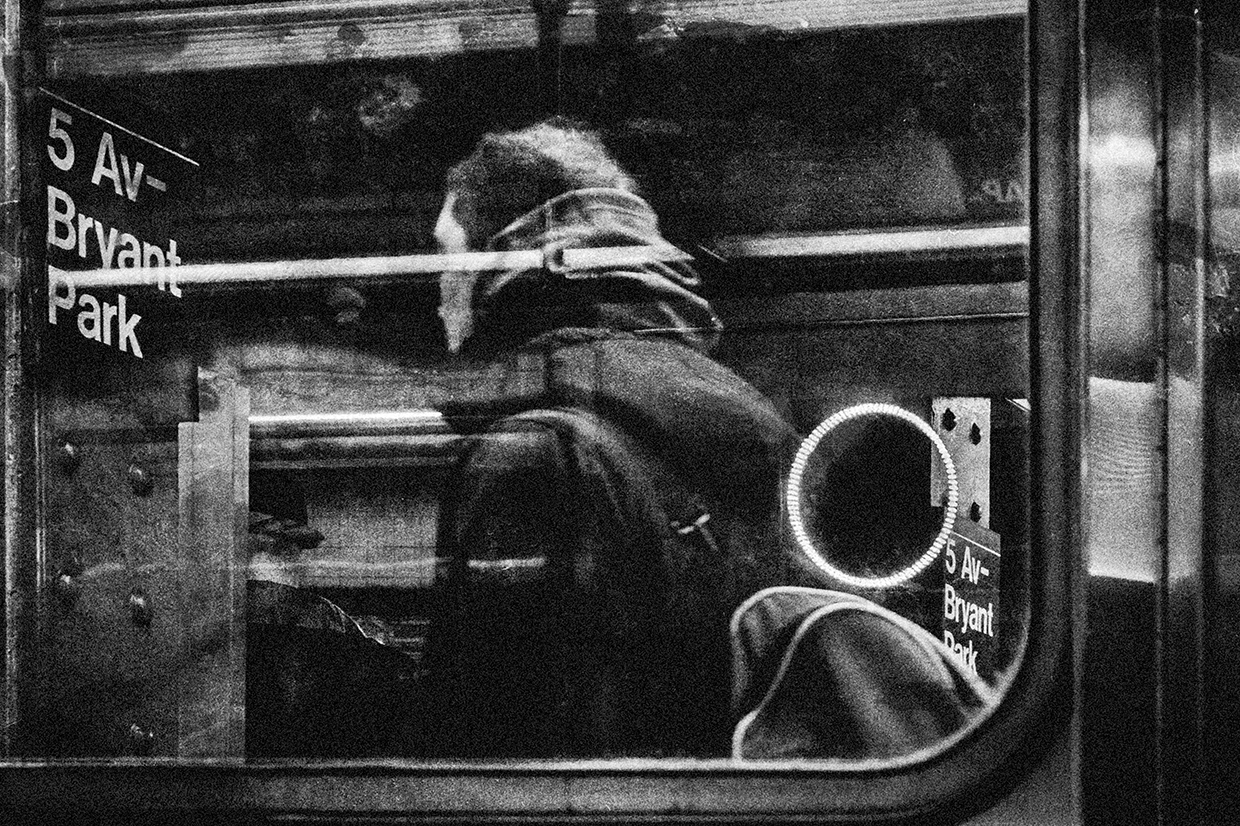 My shooting style is more like Bresson (Henri Cartier) than that of Moriyama (Daido), in that I am interested not only in my subject but how they relate to their environment and the graphics nature of the imagery. Maybe that is due to my background in painting and advertisement as everything has to relate to the page. That is not to say there are no “happy accidents” in my pictures,  one case in point is the image  “QueensBridge” the foreground person just happened to walk in front of my camera as I was shooting. That happy accident made the entire picture. 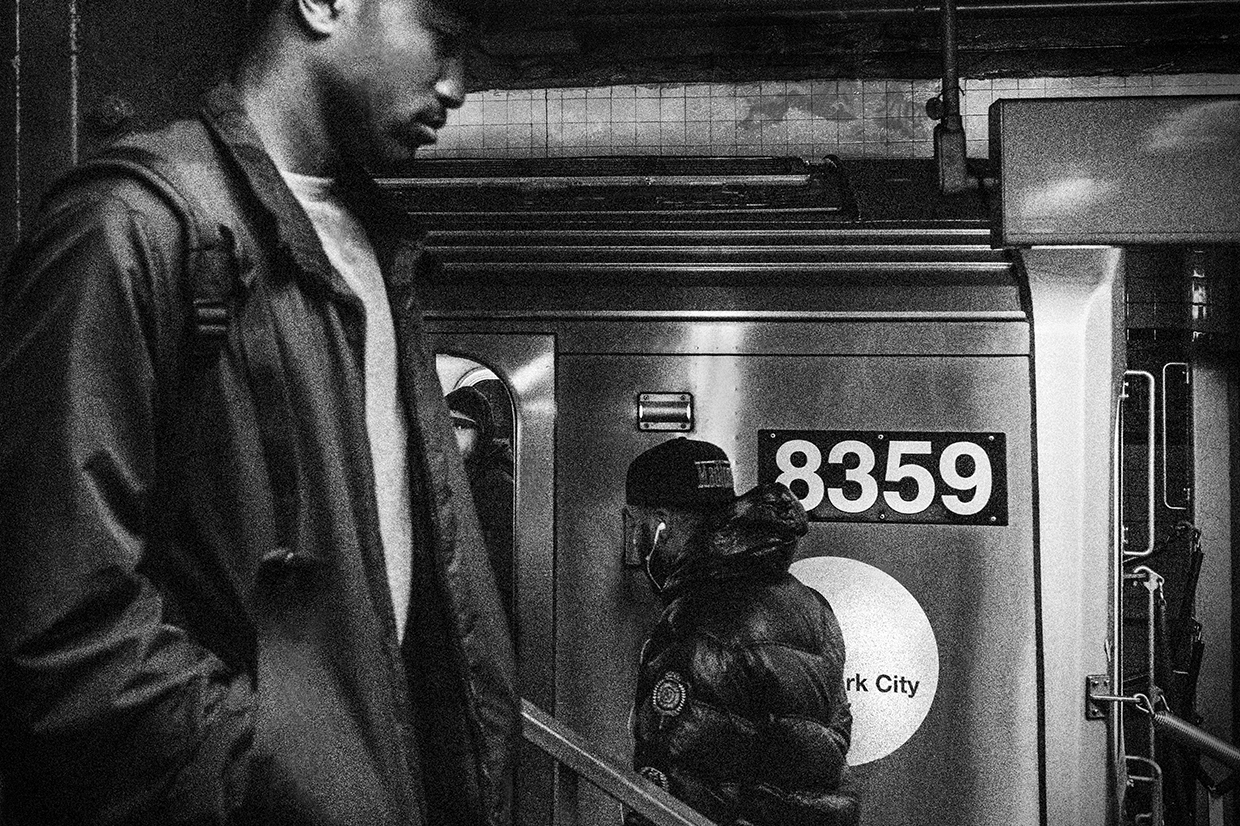 As far as what obstacles I have faced and what are the technical aspects of this series, firstly, there was the challenge of shooting in a darkened atmosphere. I had to think of ways to increase my f-stops, and maintain a moderate shutter speed to stop action underground. Initially, I began shooting people already on the subway, sitting there, as I wanted to relate to the viewer the current state of the ridership so my top ISO was 1250. But as the series progressed and evolved (most series take their own paths) I changed to a camera that could obtain higher ISO and still give me the quality I usual get in my outdoor imagery. Presently I am shooting at ISO 6,400 to 16,000 depending on the situation. 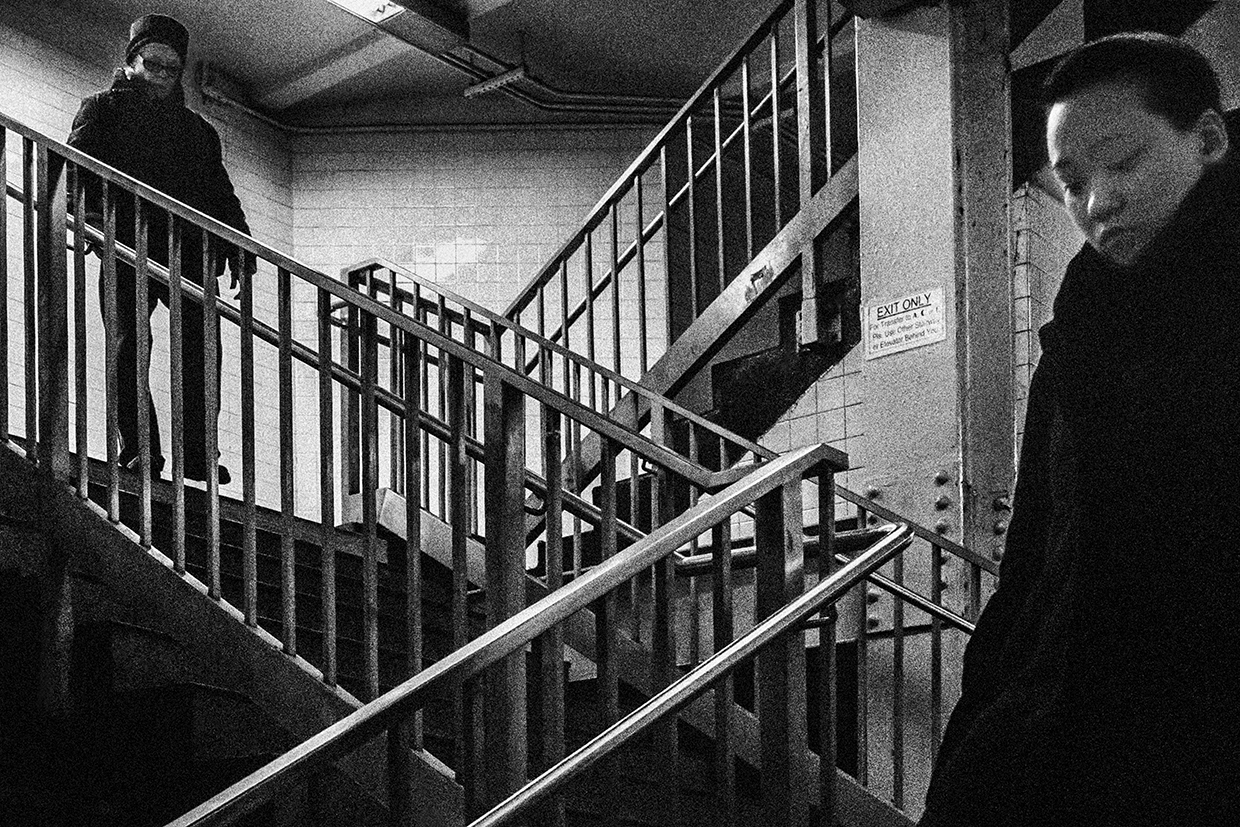 I also wanted to shoot with a smaller camera than what I normally use. This way the camera doesn’t present itself to the people I am shooting. I feel that when one gets in an intimate relationship (I am shooting in a closed environment) with one’s subject the camera shouldn’t be obtrusive, in your face, so I changed to a small point and shoot camera, and then to a small fix lens camera that would give me slightly more quality at a high ISO. I was very surprised to learn that people in NYC, especially since there are so many tourist here are very comfortable being photographed, as long as you aren’t obnoxious or in their face when you are taking their picture. Of course there is the odd case of someone that doesn’t want their picture taken. In that case, one has to respect their feelings and not do so.

Finally there was the challenge of grain. My normal shooting is done at ISO 100 to 400, and shooting at 6400 and higher presented more “noise”. I thought about this for a while and finally I embraced the grain as I feel it is an important part of the imagery, it is the grittiness and esthetics of NYC. It was then that I had a talk with a few software friends that told me of a grain generator program that would add grain separately in each of the tonal ranges so that the image wouldn’t get that “flat” grain look. In film, grain patterns change with tonality, you get less grain in the highlight areas than you do in the midtones and shadows; this program imitates film as closely as possible and it created a uniqueness to my imagery as I could now control how much, how strong and how rough the grain patterns could be. 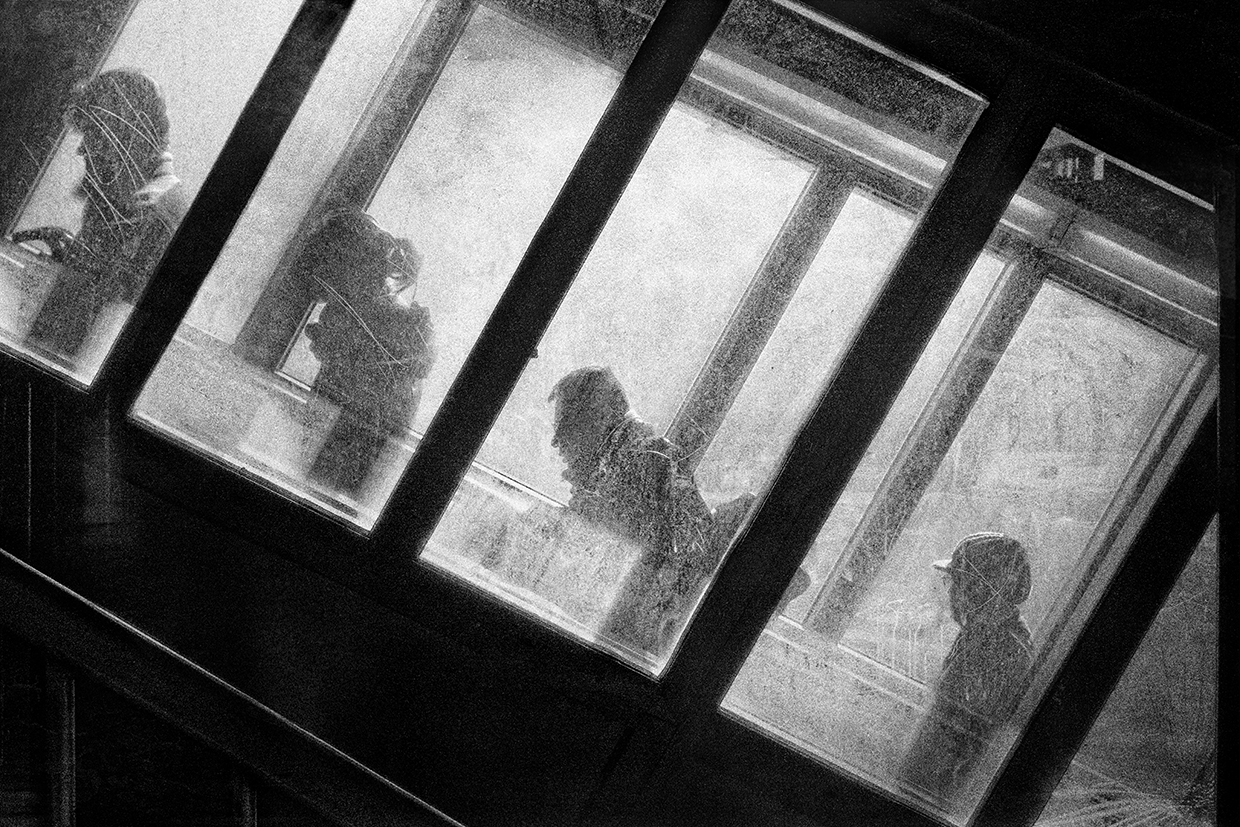 Then came the challenge of what paper to print the series on as, to me, the print is just as important as the picture. So I decided that this series should be printed on newsprint paper, which evokes everything that makes NYC the publication capital of the world. Of course, the paper which will yellow with time emphasizes the disposability of the times we live in, invoking feelings and emotions one might identify with on their own journey. 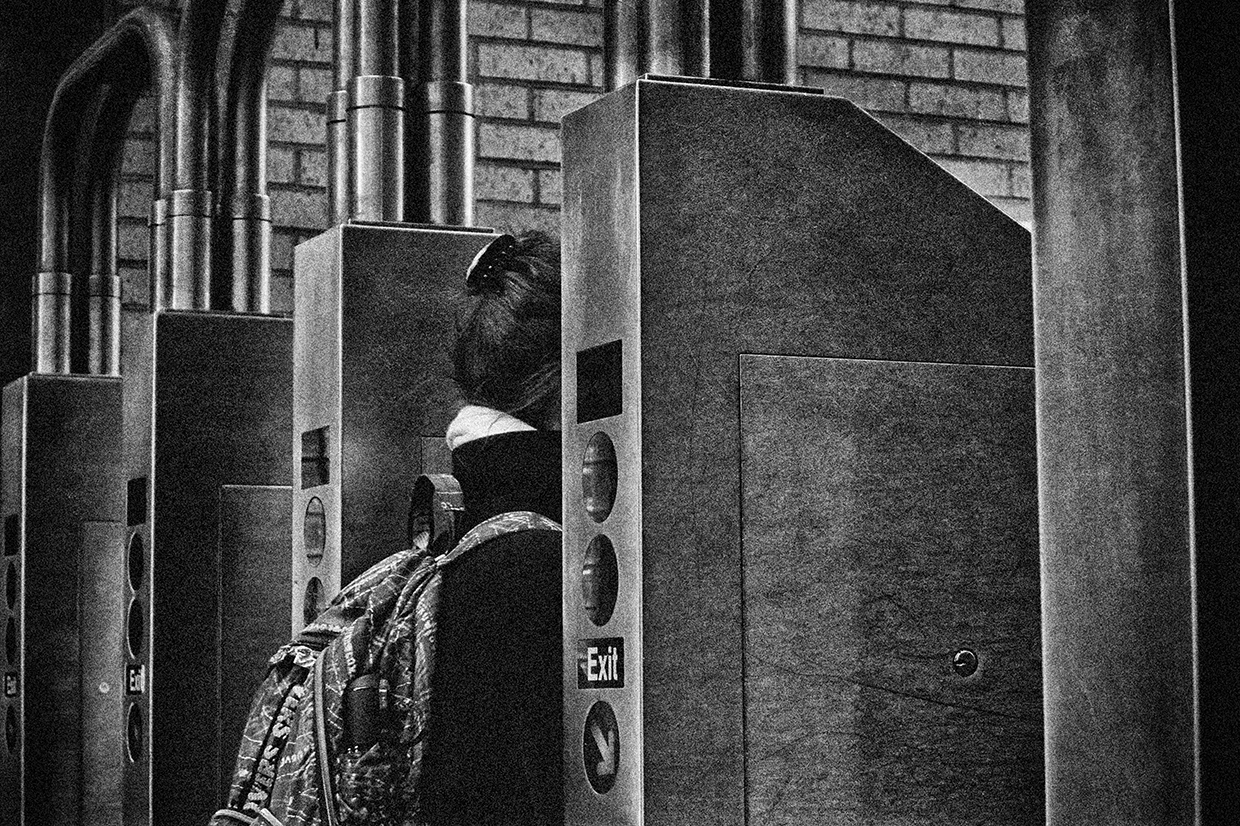 This is a series about the people of NYC, about their daily lives and how they travel within it’s framework. It is an ongoing series as I want to the viewership to see the uniqueness and the every changing feel of NYC.