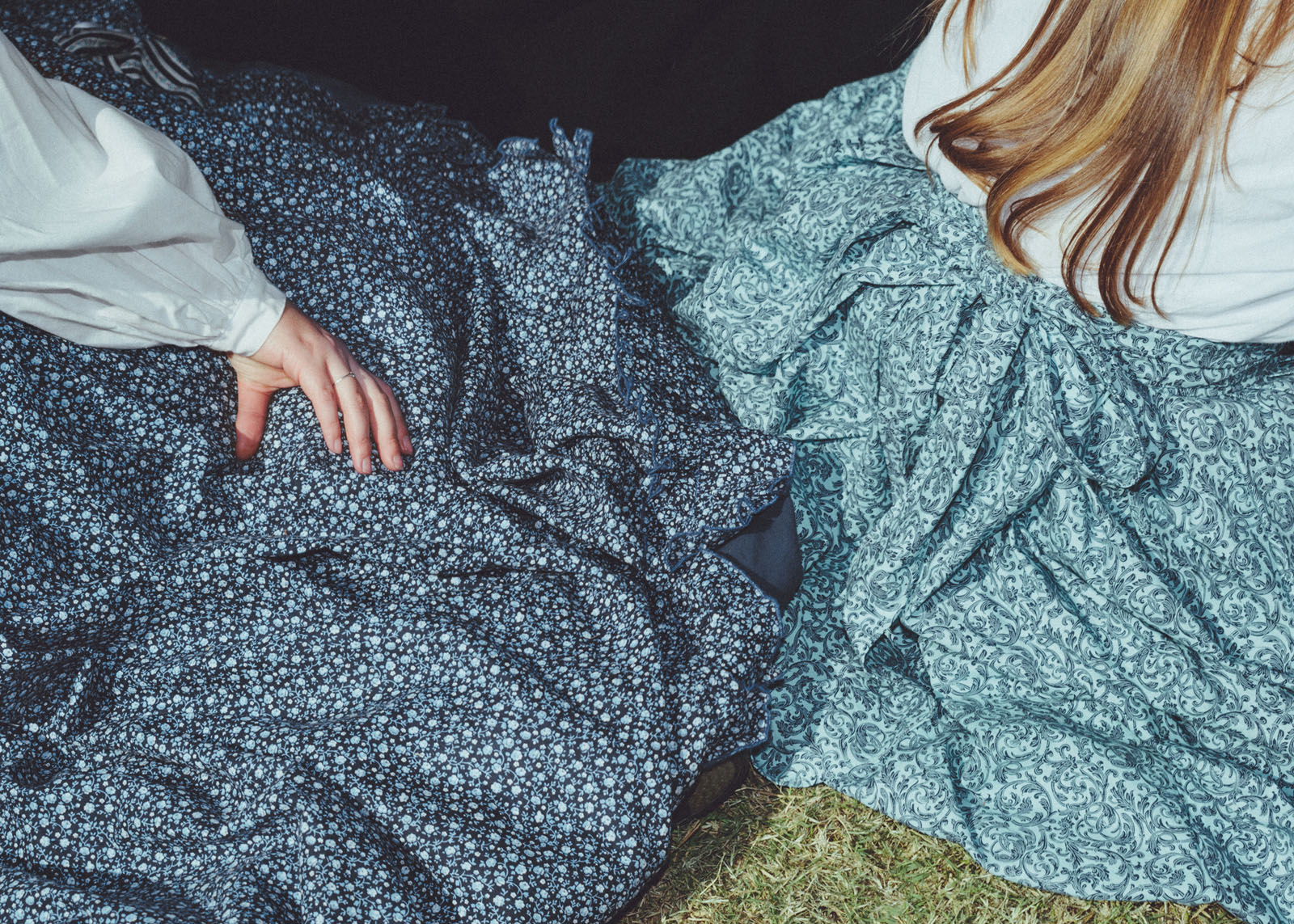 Human beings have waged war since the dawn of time. They have played war for almost as long.  Roman emperors staged massive battle reenactments in the Colosseum, with casts of slaves and prisoners of war fighting literally for their lives. Two thousand years later, Buffalo Bill Cody concluded performances of his Wild West Show with a reenactment of the Battle of Little Big Horn. No one died – the bullets were blanks, the scalping sleight of hand – but Cody’s company did include Lakota warriors who had fought in the battle, including, for a time, Sitting Bull himself. 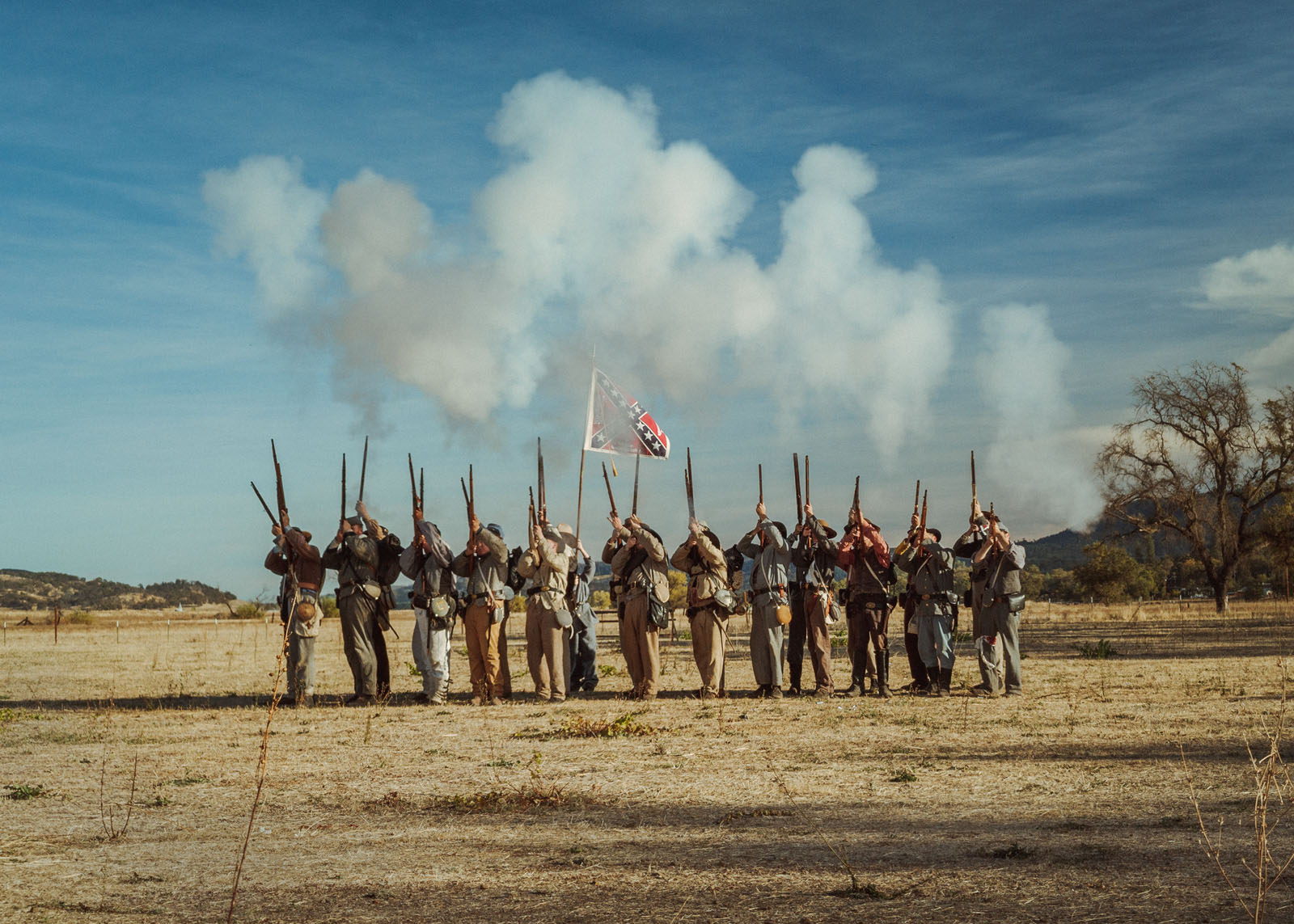 Today, we have other vehicles – movies, television, video games – to indulge our taste for vicarious combat. But in pockets around the world, reenactors continue to answer the call to arms.  In 2015, the fields of Waterloo rumbled again with cannon and musket fire, as 6,000 men in period costume commemorated the two hundredth anniversary of Napoleon’s final defeat. In Britain, the growth of a company of right-wing Waffen SS reenactors prompted passage of a law restricting World War II reenactors to the uniforms of Allied forces. 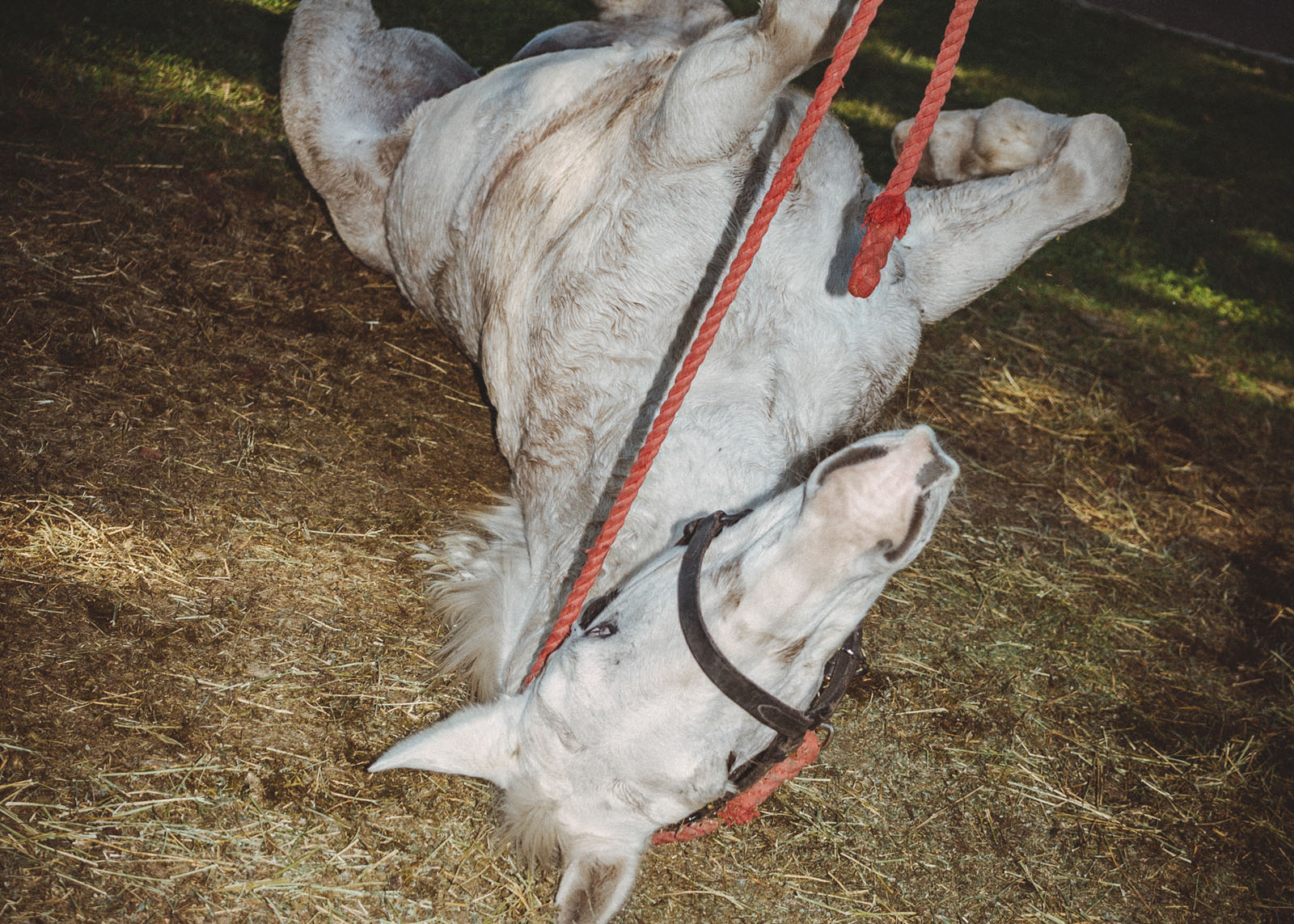 The United States has its share of Nazi reenactors, but the commemorative landscape here is dominated by a single conflict: the Civil War, or as most reenactors prefer, the War Between the States. Every weekend, from New England to New Mexico, thousands of Americans, the vast majority of them white and male, shoulder reproduction rifles, dressed in regimental uniforms correct to button and stitch. For some, derisively known as “Farbs,” the experience is a lark, but for others it is a life. The most dedicated reenactors, so-called “Progressives,” become their characters, researching the most mundane details of individual soldiers’ lives, adopting not just their uniforms but their demeanors, diction, even their diets. They eat beans from tin pots and sleep beneath thin blankets on beds of straw, conjuring a conflict that killed more Americans than all other U.S. wars combined. 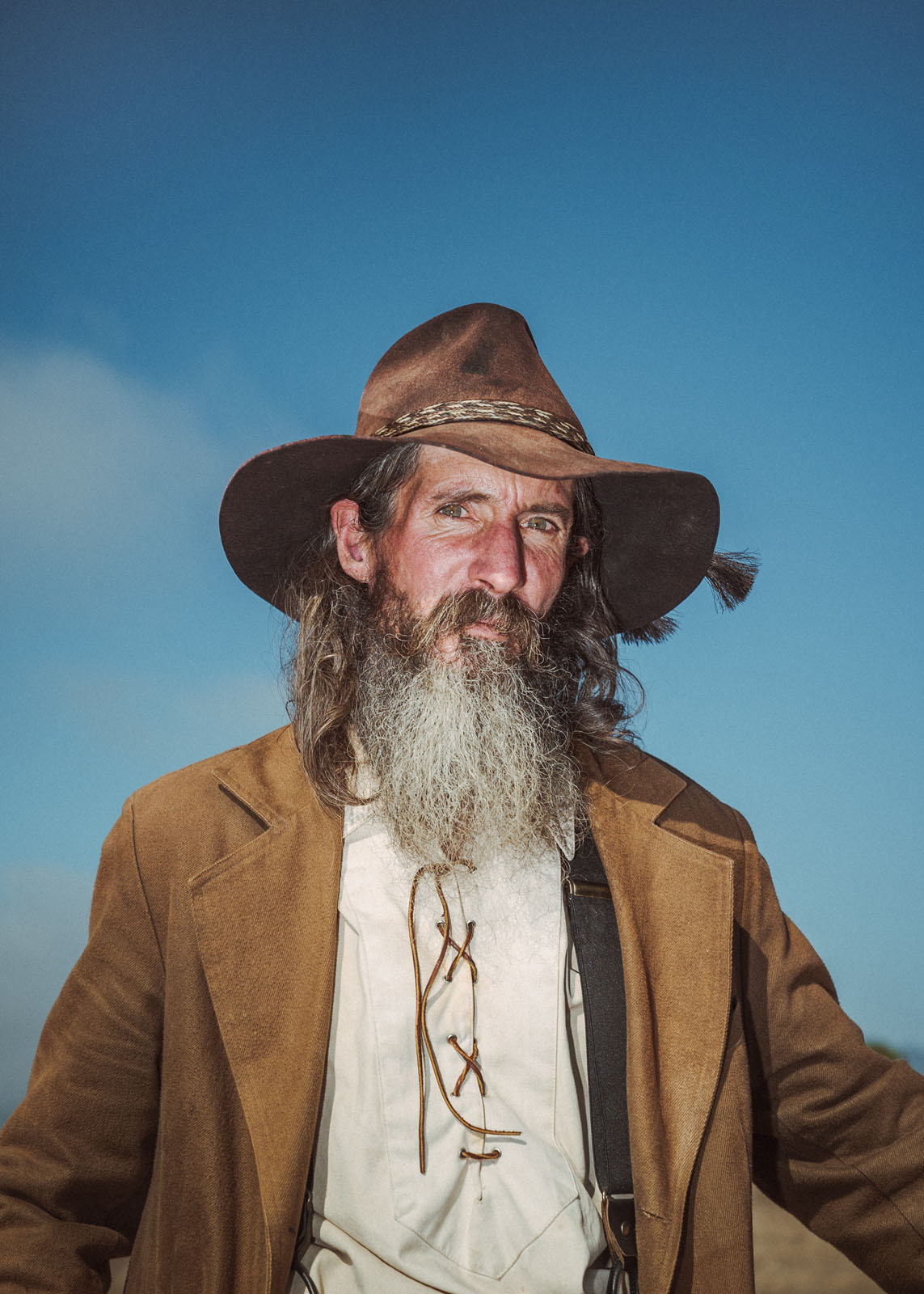 Americans love the Civil War. Generations of historians have tried to explain this curious fact, tracing the process that transformed a deadly, divisive war into the thing that most Americans imagine today: a great unifying trial, full of gallant generals and brave citizen soldiers. Part of the explanation is to be found in the sheer scale of the carnage, which spawned new forms of commemorative culture, from military cemeteries, with their endless, uniform ranks of the dead, to annual days of remembrance – Decoration Day in the South, Memorial Day in the North. The growth of neo-Confederate filial organizations was also crucial. Groups like the Sons of Confederate Veterans and the Daughters of the Confederacy worked tirelessly to burnish the Southern cause, most notably by denying the significance of slavery in the road to secession and war. Educators played their part, mounting a concerted campaign to expunge “long-legged Yankee lies” from the textbooks read by American children. In the new orthodoxy, the war’s significance was not to be found in politics at all – in the facts of sectional conflict and secession, slavery and emancipation – but rather in the courage and fidelity of ordinary soldiers, blue and gray, now united in the sepia tones of shared sacrifice. 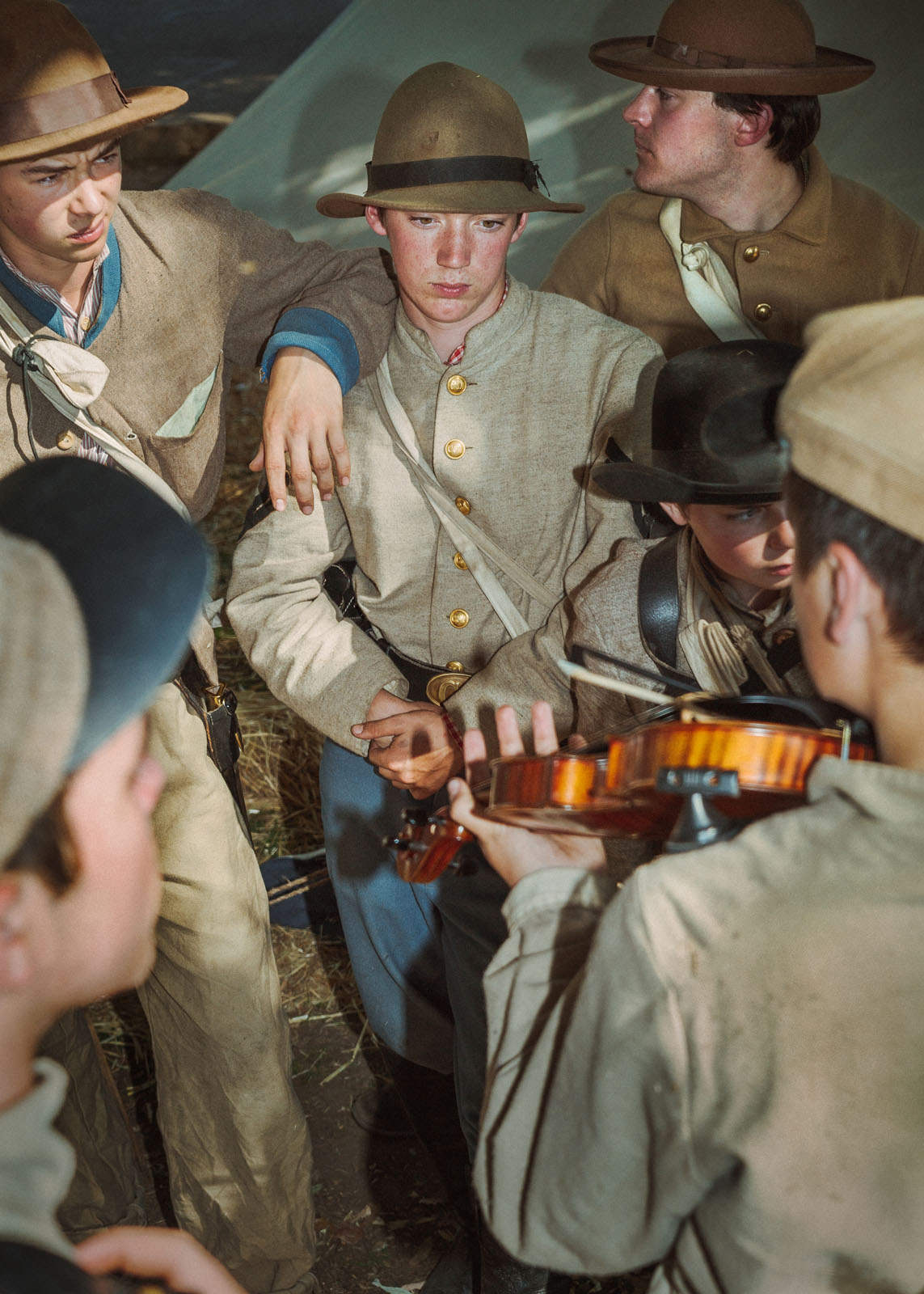 The new orthodoxy about the war received concrete expression, literally and figuratively, in the monuments and memorials that proliferated on college campuses and courthouse lawns across the South (and in many areas of the North as well) in the years between 1890 and 1915. The timing is significant. The vast majority of the more than two thousand Civil War monuments that stand today in the United States were erected not in the quarter century after Appomattox but in the quarter century that followed, years that also brought legal segregation, disenfranchisement of black voters, and the ritualized horror of lynch law. Scarcely a handful of these memorials even gesture at slavery or its vexed racial legacy, focusing instead on the common soldier, who typically appears atop a high pedestal, rifle at the ready. 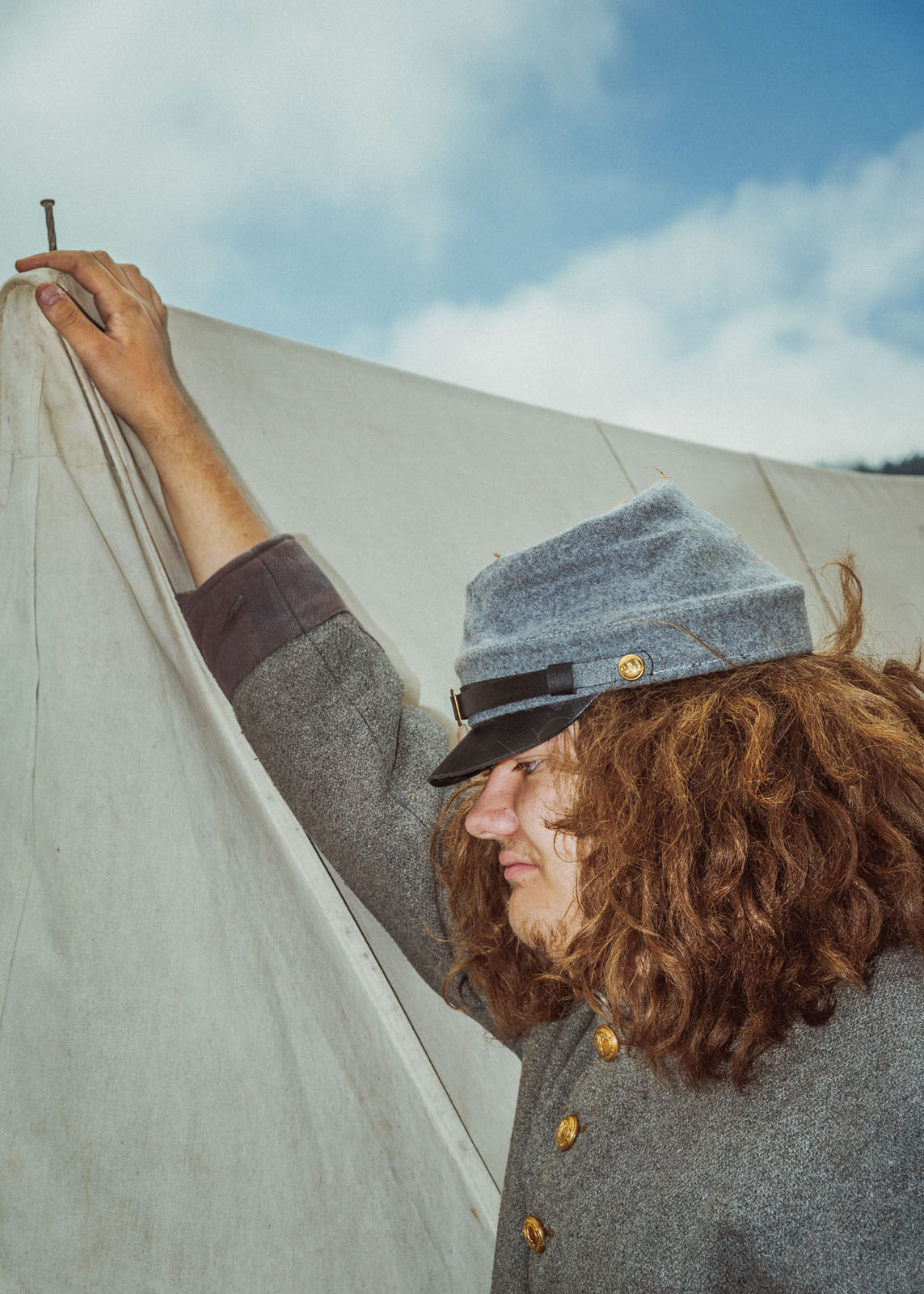 The rise of the reenactor movement was part and parcel of the process of white sectional reconciliation. A watershed moment occurred at Gettysburg in 1913, when more than 50,000 aged veterans, many clad in their old uniforms, met again at the Pennsylvania crossroads where they had clashed fifty years before. At the conclusion of the festivities, the men reenacted Pickett’s Charge, converging on the Bloody Angle, the low stone wall where the tide of the Confederacy had broken and rolled back, now extending hands rather than bayonets. The watching throng cheered this final act of sectional reconciliation. Few troubled to ask what that reconciliation signified for African Americans. 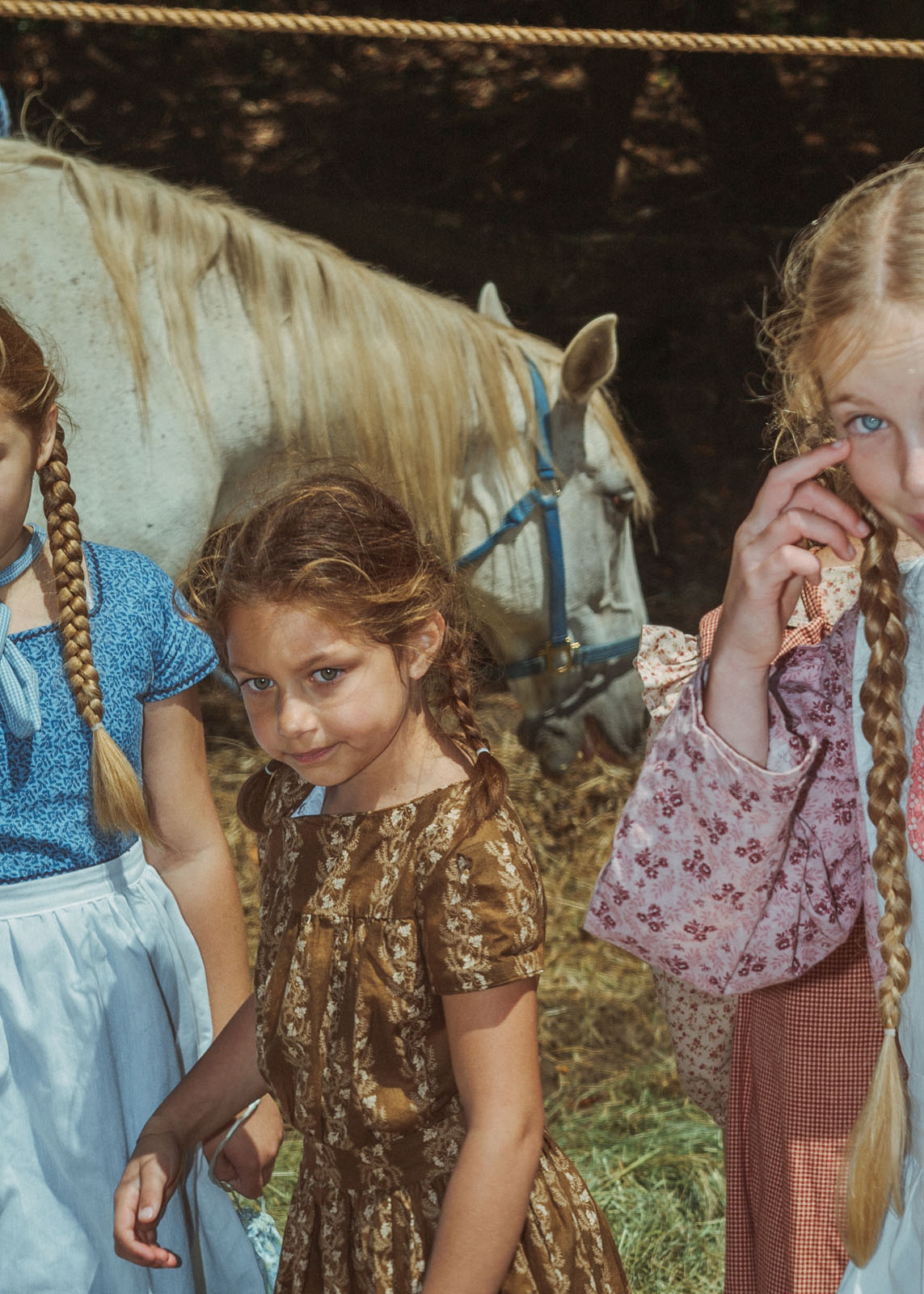 Most Civil War reenactors will not welcome these words. They will dispute the role of slavery in the coming of the war. They will point out – correctly – that most Confederate soldiers never owned slaves. They will insist – again correctly – that one can honor the service of soldiers without endorsing slavery or white supremacy. But this was the context in which the culture of Civil War reenactment was born and it does no disservice to today’s reenactors to acknowledge it. 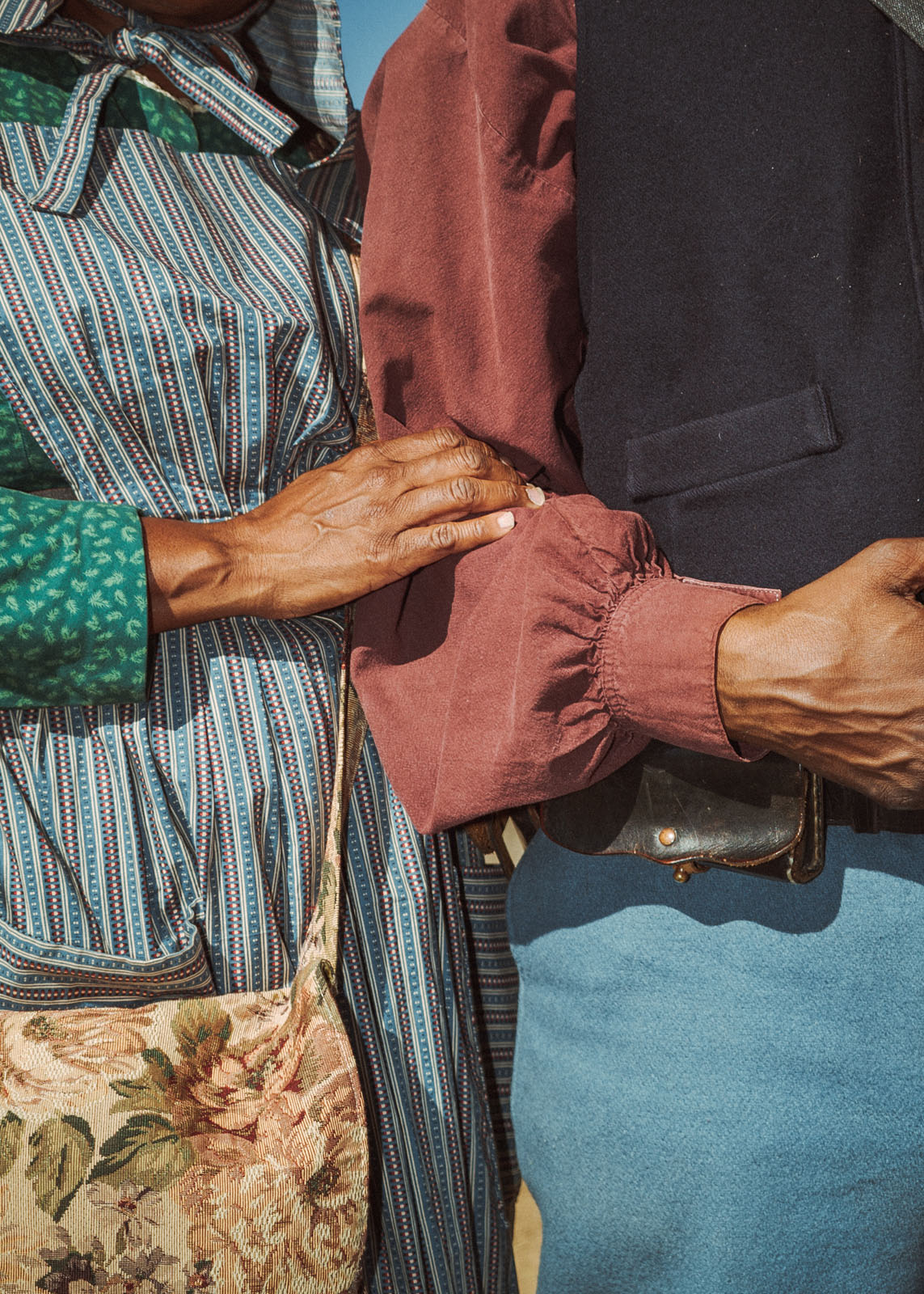 The Civil War reenactor movement stands today at a crossroads. The broad consensus about the war’s meaning forged in the late nineteenth- and early-twentieth centuries appears to be crumbling, as the nation engages in a belated reckoning with slavery and its legacy. Prominent institutions, including universities, churches, and corporations, have commissioned studies of their historic ties to slavery. Buildings named in honor of slaveholders have been rechristened. Several American cities, including New Orleans, Baltimore, and Charlottesville, Virginia, have taken down Confederate monuments. These actions have, in turn, provoked a visceral reaction in some precincts of the far right, many of whose members have conspicuously embraced the iconography of the Confederacy as their own. What all this portends for the future of Civil War reenactment remains to be seen, but it does suggest some stormy seas ahead. 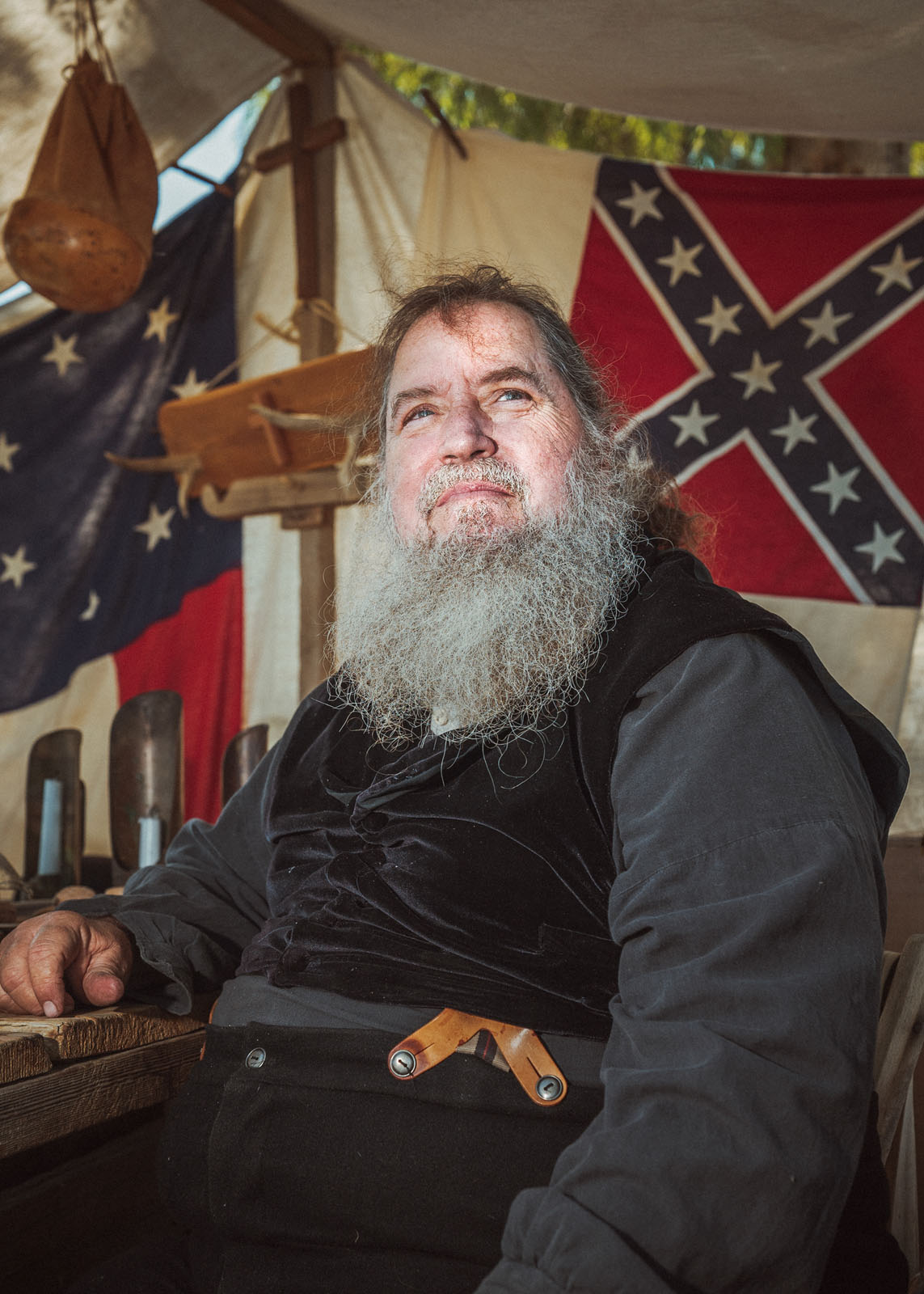 In the meantime, reenactors continue to answer the call, mustering not only on the hallowed grounds of Gettysburg, Antietam, and Shiloh but also further afield. The photographs in Brandon Tauszik’s body of work were made in northern and central California. A continent removed from the main theaters of war, California is home to half a dozen Civil War reenactment organizations, which between them stage some twenty events per year. Look carefully at the images. They will surprise you. Given our fraught political moment, one might expect a more skeptical perspective. Instead, Tauszik renders his subjects as they present themselves, never puncturing the carefully cultivated historical illusion surrounding them. They are generous, even gentle images, devoid of condescension, inviting not judgment or ridicule but curiosity about people whose commitments may differ from our own. In this polarized, perilous moment in the history of our democracy, this is an attitude worth cultivating. Societies that lose it sometimes fight civil wars in earnest. 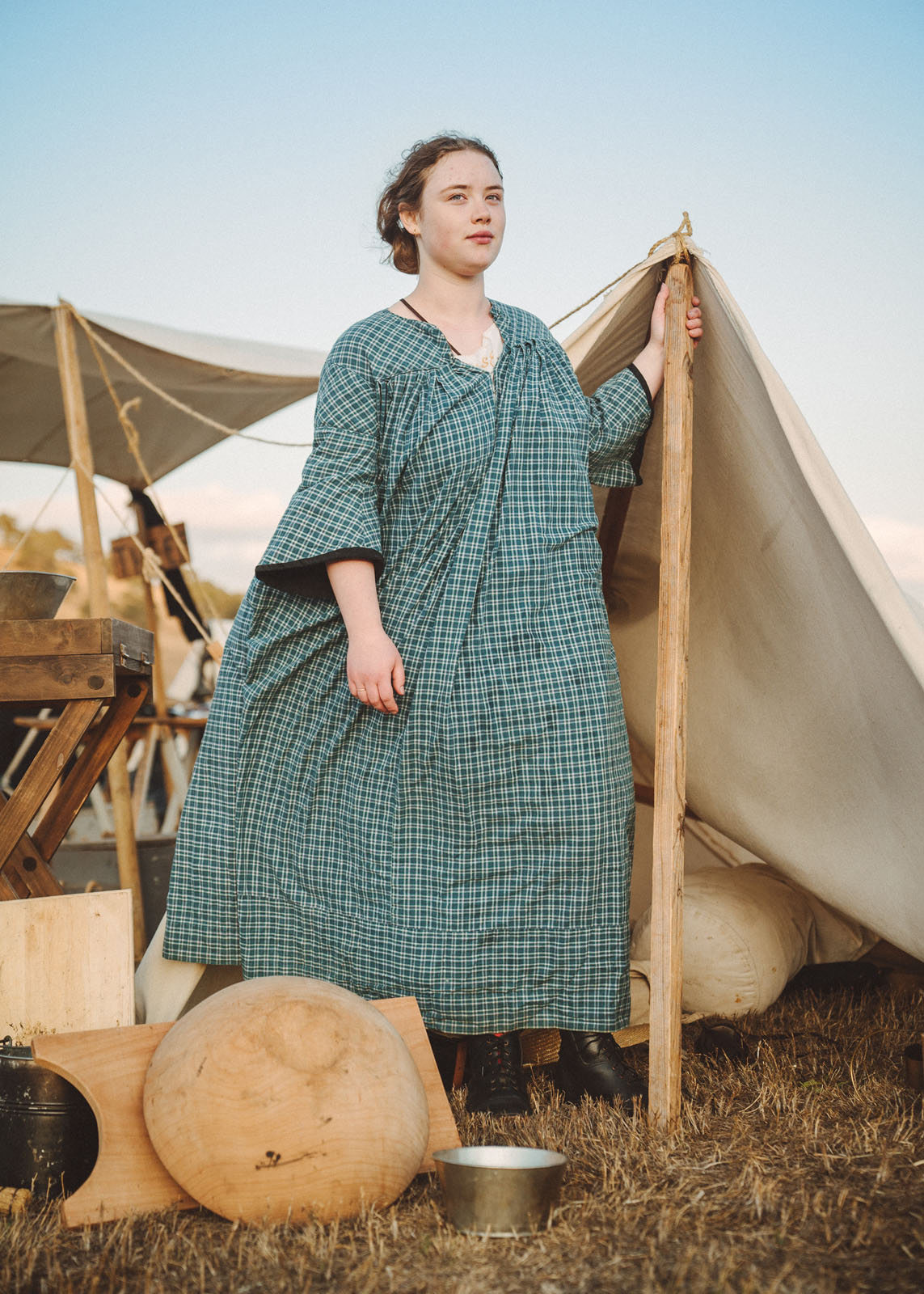