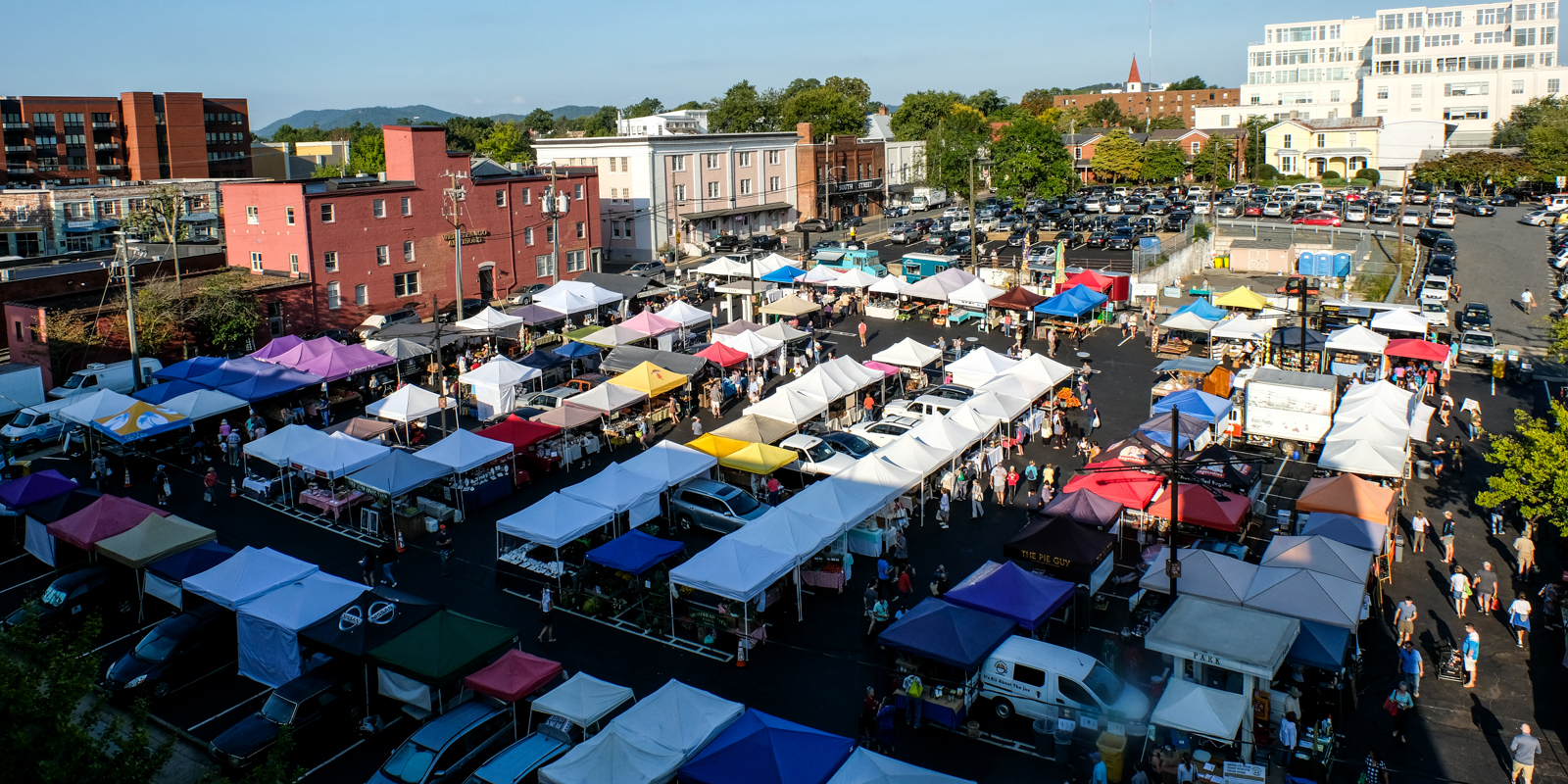 It has occupied about 80% of my time behind the camera since that time.

But earlier this year I hit a wall. I was in a rut. I didn’t feel the need to go out and find the next shot. It was almost a type of depression. The bottom line, I was burned out on street photography. And didn’t know what to do about it.

Under normal circumstances, I would have moved on to something else without a thought. But I couldn’t because l spend a big chunk of my time publishing a magazine on the genre. I had to be more enthusiastic, more active and engaged than the average photographer…right?

Because I publish a magazine about street photography, I felt pressure to be fully engaged in it at all times. However, I just wasn’t feeling it. I was perplexed and didn’t know what to do.

Then I did the worst, I began comparing myself to others. This was a bad move because I spend so much time looking at the work of some amazing photographers that are way out of my league.

Like many photographers of my generation, I have a “Brownie camera” story. At the age of 10, I received a darkroom kit for Christmas and immediately started making photographs with my parent’s Kodak Brownie camera and processing them in my darkroom which was previously our basement bathroom.

Even before that, I was drawn to the real-life images in Life and Look magazines. They laid the groundwork for taste in photography, which holds to this day.

I didn’t know it was a “thing” or even realize it had a name until after the new millennium. Street Photography, that was it. That’s what I wanted to do.

I took an online course from a company called Better Photo, met some amazing photographers in the process and never looked back.

Whenever I traveled, I didn’t bother with the popular tourist photo spots, all I wanted to do was capture life on the streets. It drove my wife nuts…and still does. It also influenced my vision when shooting events for my paid clients.

Through my web development business, I know intuitively that if I have a problem chances someone else has had it as well and that the answer is available somewhere on the web.

But for other, more personal issues, I never seem to think of that and just plow forward guessing at solutions, giving them a try, failing, trying again…you know, beating my head against the wall.

So, I stepped away and stopped thinking about it altogether.

I hadn’t realized as I was working my way through it that the answer was right at my fingertips. I could have avoided a lot of frustration. More on this later.

I remember a line from the brilliant television show Mad Men when the lead character Don Draper, offered advice to his protégé, Peggy, who was stuck on a problem. He said “Think about it really hard. Learn everything. Then, forget about all of it and an idea will just POP into your mind.” That’s sort of what happened to me.

One morning as I was in that half-asleep half-awake alpha state it came to me. “You’re a storyteller, so use your camera to tell the stories of people who interest you.” 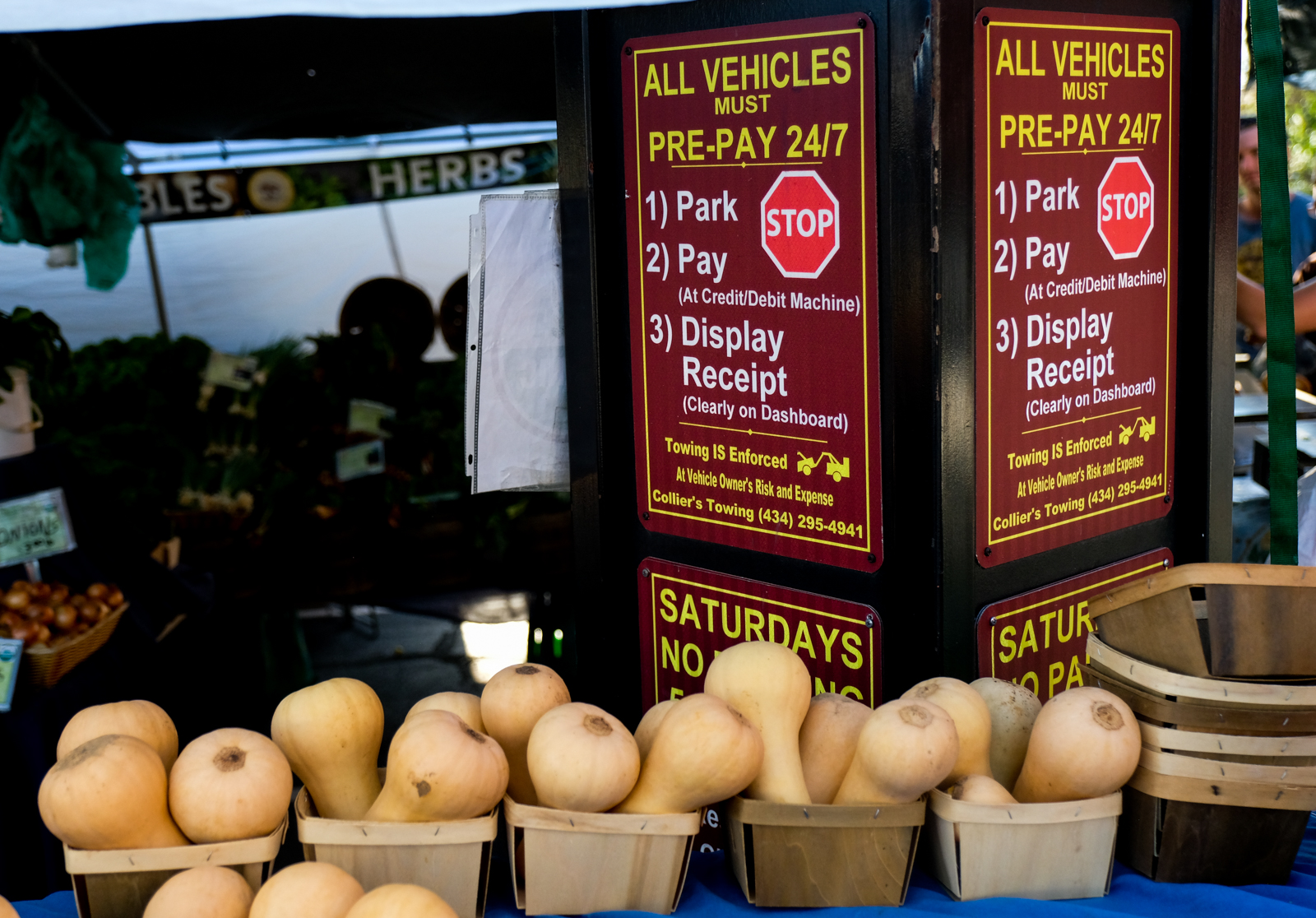 The Charlottesville City Market is held each Saturday in a 1 square block parking lot. I made this photo to show the transformation.

The following weekend on a hot September morning I grabbed my camera, jumped on my bike and rode into town (Charlottesville, Virginia) to shoot around the edges of our local farmer’s market called City Market. It happens to be one of the largest in the country, is well attended by locals and tourists and as a side benefit has some amazing food.

My objective was to find the story behind the community created by the market and the people who make a living there. 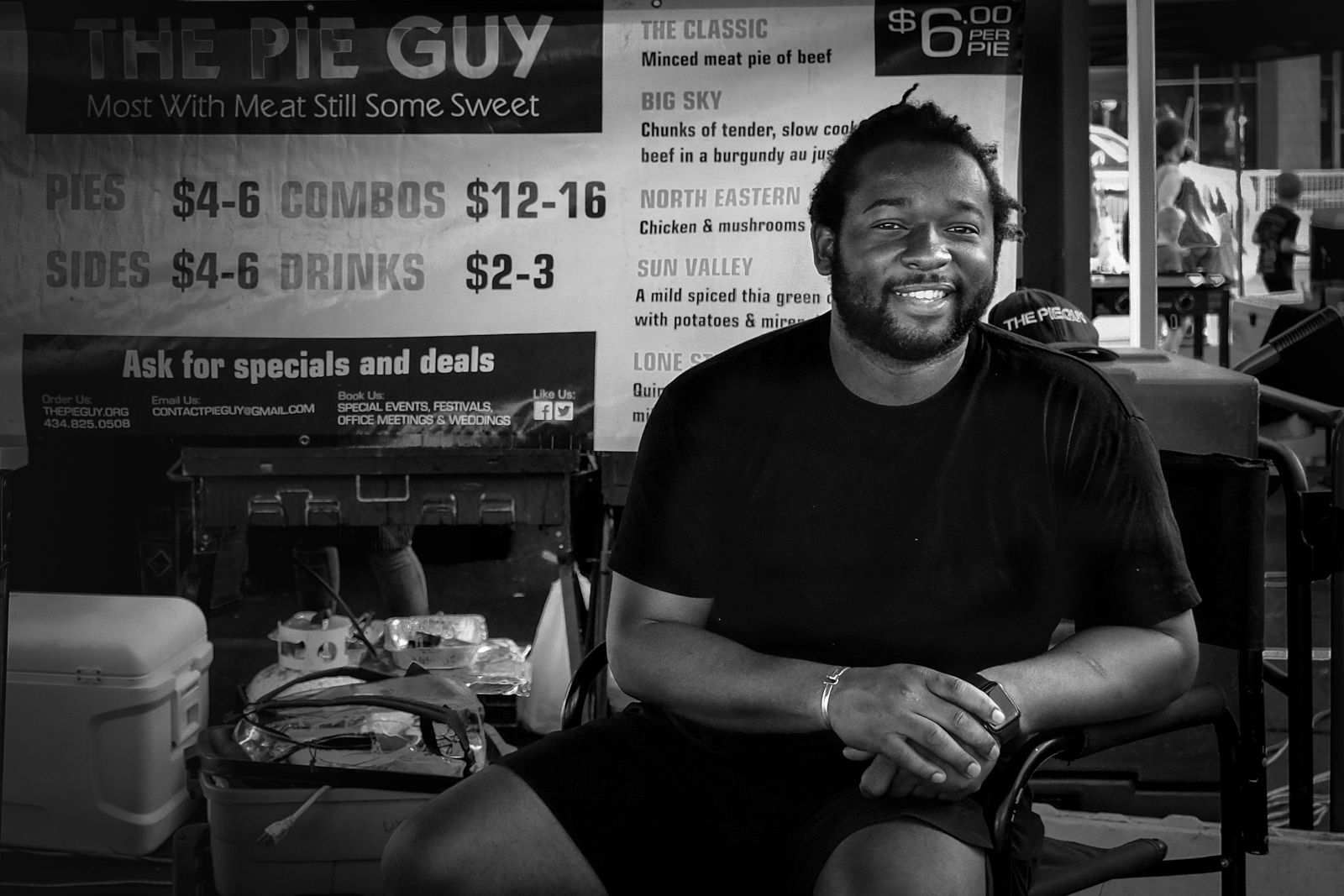 Photographically I mixed things up. On the street, I always shoot with a prime lens (35 or 28). This time I took a zoom (Fuji 16-55mm 2.8). In my mind, this was akin to blasphemy, but I wanted to do something different. I spent hours shooting the scene from different perspectives. I stopped to chat, asked for permission and made some new friends.

Shortly before leaving I met Yvonne and her husband Jesse who sell an amazing Italian sauce from their stall in the market. They allowed me to make several photos of them at work which sparked an idea for a new series of stories. It’s about people who “make something from nothing.”

I’ve always bee intrigued by people who create a business, or piece of art, or organization or whatever from the germ of an idea. After all, that’s how Street Photography Magazine began, with a simple idea (and then a ton of work). 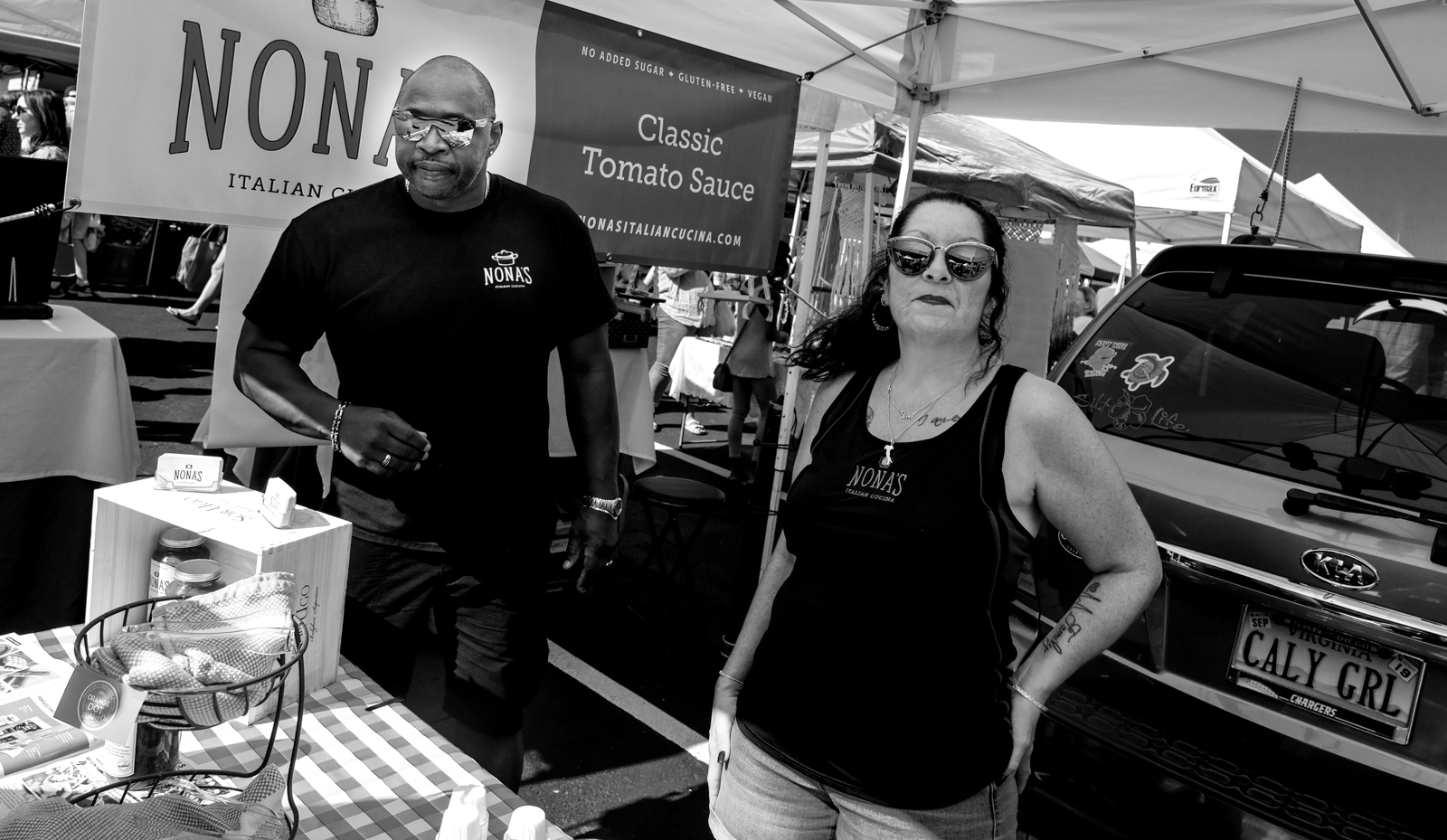 Yvonne and Jesse invited me to photograph them making their sauce at a cannery (which is an interesting story itself) about 75 miles away…something they do only a few times a year. She told me the story of how she learned the recipe while living in Naples, Italy when Jesse was stationed there in the Navy. The story of her journey from the germ of an idea to reality is a life lesson we can all learn from.

That experience set me on a path to not only tell her story but to seek others who have created something from nothing.

This experience showed me that I love finding stories from people’s experiences, finding lessons within them and using my camera and words to share them.

Stepping out of my comfort zone, trying something different and understanding the story behind my subjects set me on a new path.

Where will this lead me? Who knows. In the meantime, I’m on board and moving forward. 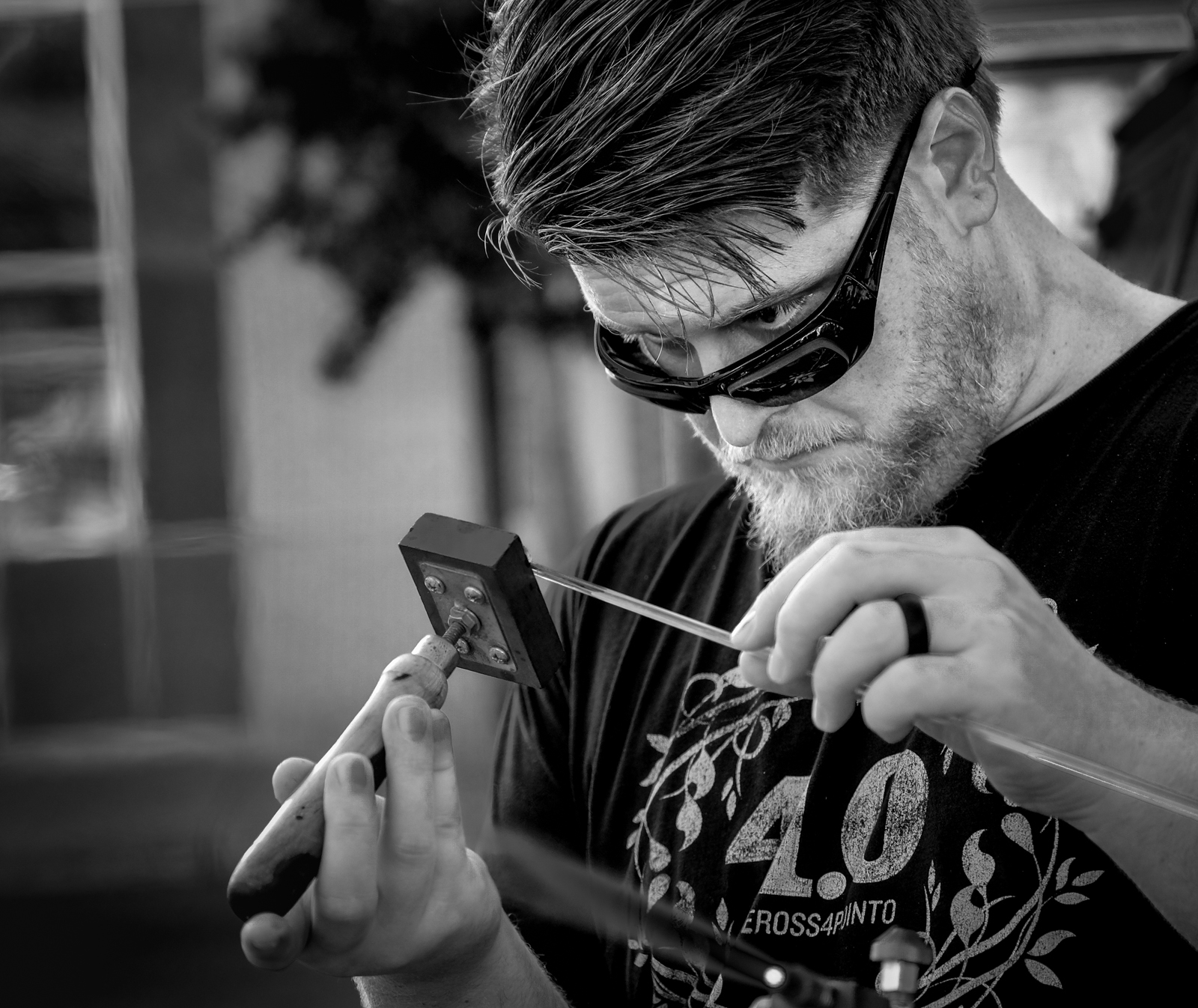 After running in circles for months looking for a solution to my burnout, this solution came to me by accident. And it didn’t have to.

In preparing this article I finally realized that I should ask other street photographers how they deal with it. So I wrote a quick post in the Street Photography Magazine Facebook Community asking our members if they’ve experienced burnout and how they deal with it. The response was immediate, almost overwhelming and very helpful. I should have done it months ago.

Unfortunately, I can’t include all the comments in this article but I have summarized the key points below.

Here’s a link to the post in our Facebook Group. If you’re not a member of the group just follow the link and click the Join Group button. It’s free and we typically process new requests several times a day.

Who says you have to shoot street photography all the time? I think part of my problem was that I needed a break. In many cases, it’s a good idea to walk away from it and catch your breath. That applies to many things in life.

Meryl Meisler, who has published several well-regarded monographs and has shown her work in museums and galleries around the world took a break for several years. Then she switched things up by hand painting on some of her prints.

Matt Jerrams says “relax, catch up on other things, and wait for it to blow over…”

Bottom line, step back, do something else then come back to it with fresh eyes.

Betty Manousos says she sometimes feels uninspired and feels that getting stuck in a photography rut is simply part of the process. When this happens she forces herself out of her comfort zone which inspires creativity.

Danish street photographer Daniel Hoffman says that when he “can’t see anything to capture, although there are people around” that he goes to a new neighborhood. Then he begins to see good photo possibilities again.

Keep reading to see some creative ways others change their street photography approach to overcome burnout.

Sometimes just the feel of a different camera or the field of view from a different focal length can get the juices flowing again. That doesn’t mean you need to spend thousands on a new camera, sometimes pulling an old favorite from the closet will do the trick.

For example, Rhonda Boocock says she will shoot with a toy camera like a Holga or Diana whenever she’s in a rut.

Lynne Kaplan normally shoots with a big DSLR. But when she finds herself in a rut she shoots with her phone. 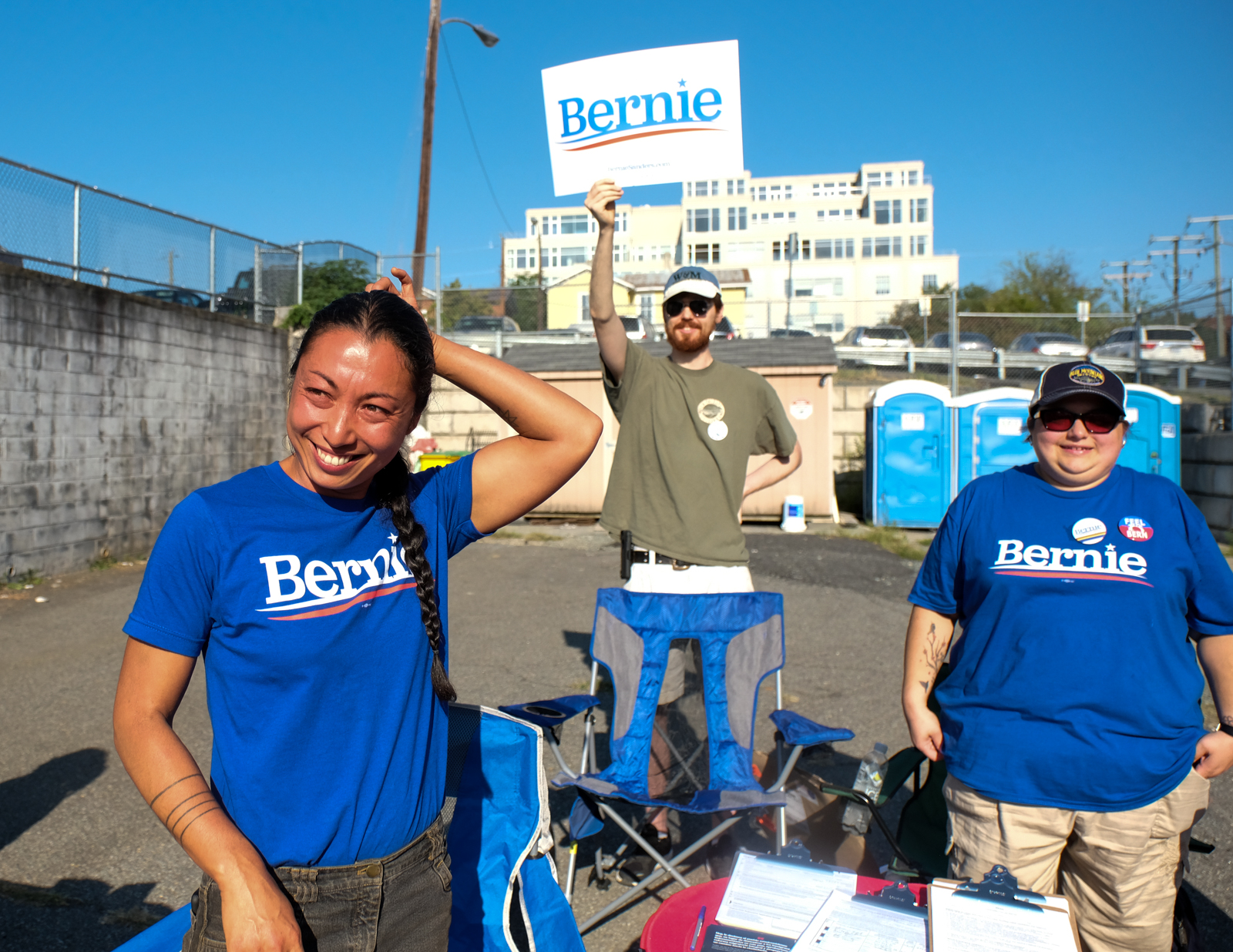 On the street I’m most comfortable shooting candids without engaging with my subjects. On this day I stepped out of my comfort zone by chatting with everyone I photographed.

Not only do we get into a rut with where and what we shoot, but we all also tend to use the same comfortable settings. For example, if you typically shoot in aperture or shutter priority, switch to manual. Focus too. The mental energy used to determine the correct exposure and calculate zone focus will make your shooting a challenge and stimulate your brain. Try it. 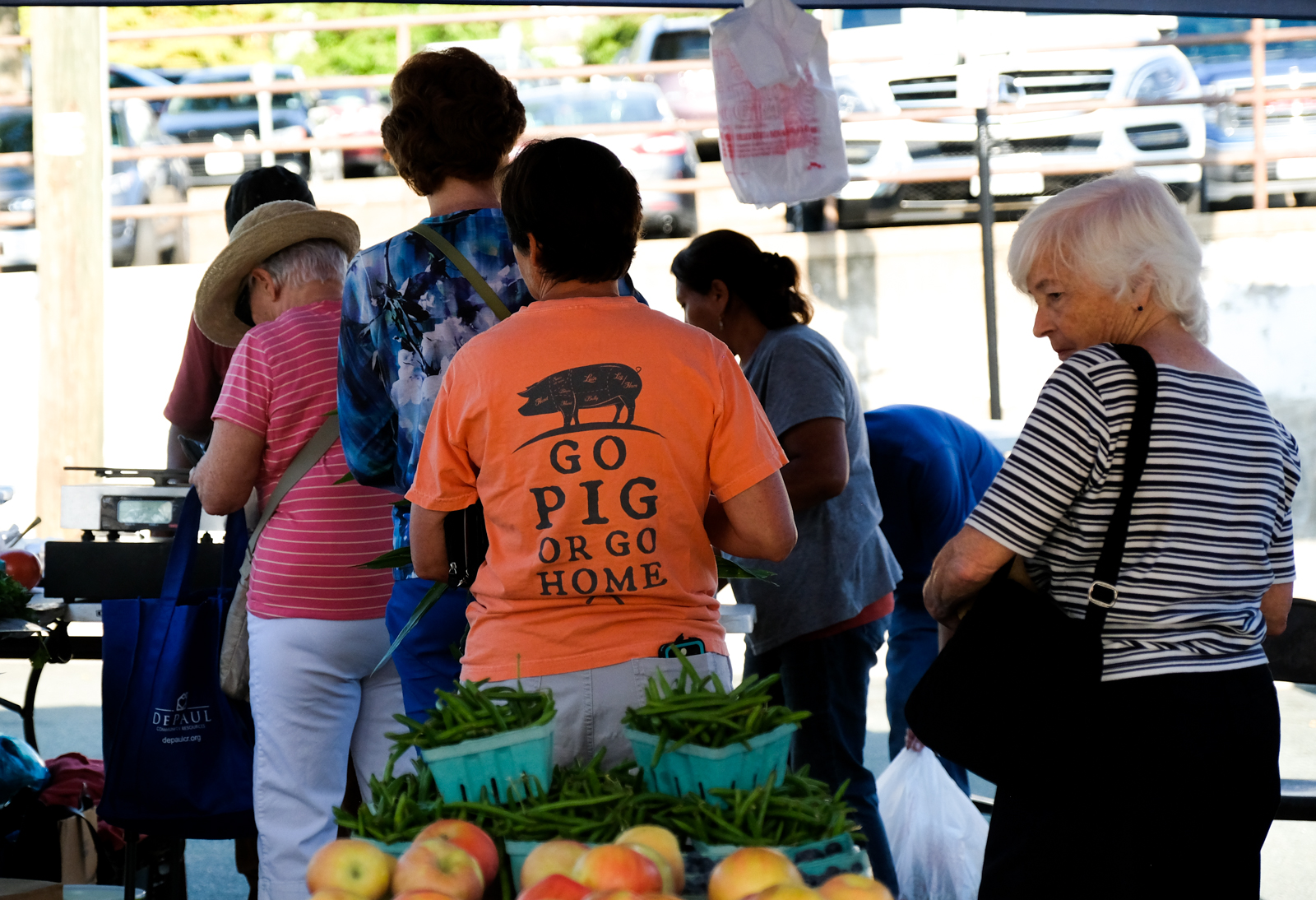 Typically I shoot in aperture priority. This day I shot manual.

There’s nothing like being around new photographers who are just discovering the art form for the first time. Their enthusiasm for learning something new is infectious.

Dublin photographer Des Byrne speaks at camera clubs throughout Ireland about street photography. It keeps him energized and engaged. He also organizes street photo walks in Dublin which have evolved into very popular local events.

Get Back to Your Roots

Kolman Rosenberg from Cleveland said “I wrote an artist’s statement some years ago. It describes my primary photographic style and some of the photographers who influenced me. When I get in a rut I pull it out and read it and it recharges my batteries. It gets me excited and back to my photographic roots.”

To get back to his roots Martin Davey ARPS likes to “shoot a little film.”

And Dan Marchant from Hong Kong says “Revisiting old images. It encourages by showing you how much you have improved and reminding you it isn’t a process that ends…so get moving forward.”

I think it’s human nature to assume you are the only one with a problem. But that’s not the case (I continue to learn that the hard way).  If you have a problem, chances are someone else has had it too…and maybe they have a solution.

Don’t be like me and try to noodle your problem on your own. Reach out and ask others how they deal with it. Burnout is common in all areas of life, not just photography. Which means you can get help from almost anyone.

We’re all different in how we become burned out and how we can best respond to it. Hopefully, you will find at least one of these suggestions helpful in getting you over the hump when it happens to you.