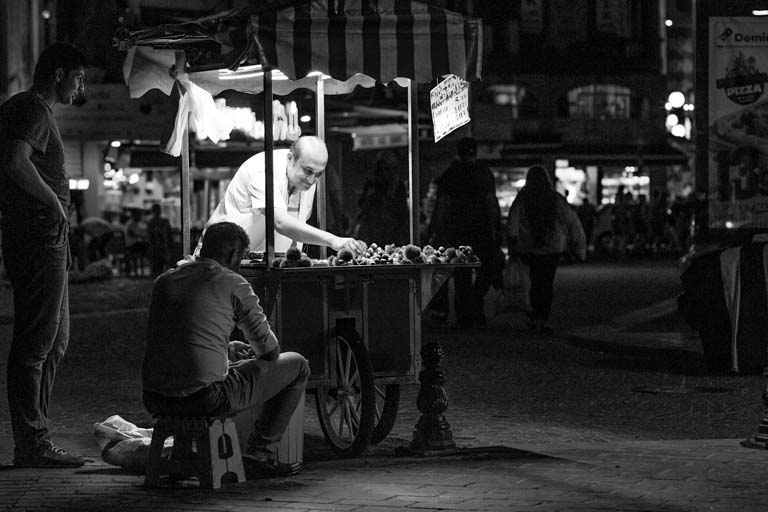 It touches me in so many ways when I see a good capture from the street. It touches me no matter whether it’s a candid or a street portrait, because it’s an image of a certain moment or a particular person, it’s authentic. It brings me to that place, sometimes it makes me laugh, many times it makes me think and wonder and when it’s a well done documentary it can make me cry. Street photography can bring me to the place where the picture was taken and it can transmit the feelings of the captured moment to me as well.

As a photographer, I enjoy the challenges of capturing street photos as well as the process of how I personally take them. When I say challenges I mean you see what you want to frame, sometimes you have minutes, sometimes not even a second to get the photograph done. In that time you have to combine your vision of the moment, with that I mean the details that you want to display to the beholder, as well as knowledge about photography and knowledge about your camera. You have think fast and with precision to achieve what you aim for.

My personal process for taking pictures is to first do research on the internet or guidebooks to find places of interest. I inform myself just roughly about them. I don’t want to have prejudice against these places. I want to have a rough idea of what to expect, nothing more. If I arrive to my destination, I can’t dig deep in a place on a bicycle or motorbike. I have to walk or hike to build rapport with the people, because for me it’s not the scenery that makes a place outstanding, it’s always the people that I meet on the way.

Don’t forget that framing moments is about capturing light. This is something you realize fast, especially at night. When you do night photography, you have to do the best with what you get and with the equipment you already got. It happens very often that you got one light source, which creates a hard shadow on your subject, which gives high contrast. Try to play with that. Try not to concentrate too much on textures and details. 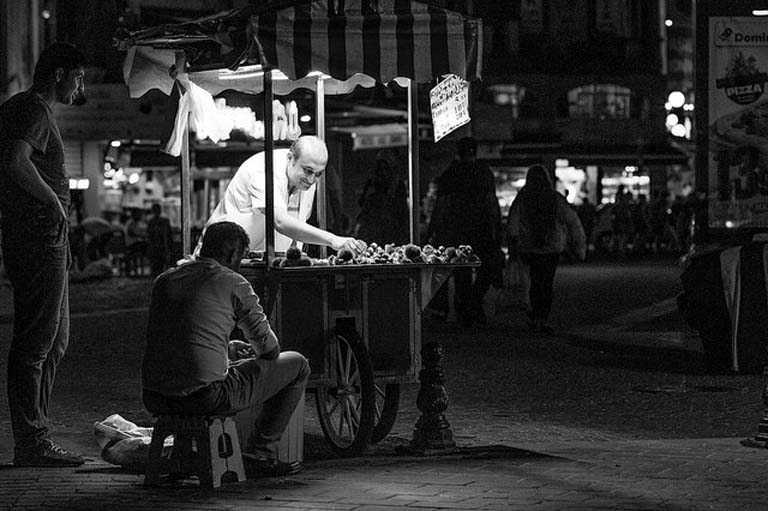 Play with the contrast.

If you are lucky, you get different light sources. Usually, the light temperature will vary. It happens that most of the time you do not find enough light. Therefore, you should concentrate more on the things which draws your attention to the subject, try to frame it evenly when things are not ‘technically’ perfect. Of course you could think of a camera with capability to raise the ISO to the high range without showing too much noise and dream about a fast lens, but you would better off concentrating on what you have.

Try to find your own personal limits of the way how to take a so called ‘good’ picture. Does the ISO have to stop every time at a certain level because you see noise when you zoom in 150% for a picture that will most likely never be printed any bigger than the A4 size, which will in fact, be more likely to end up highly compromised somewhere on the internet? Does everything has to be frozen in your picture? Or is it also okay if the people in the background are not so sharp because of motion blur? Maybe it will let the viewer immerse themselves deeper into the image if the main subject shows motion blur. In conclusion, there is no formula for a good night street photograph. You should find your own personal limits.

To catch as much light as possible, I exposed the image for a view seconds. The result is a sharp main subject and a blurry background.

Sometimes you see a gentle light on the cheeks of somebody, or a lovely light catch in their eyes. Maybe you get fascinated by the interaction between a person and their environment or, even better, a stunning smile on their face that blows you away. Simply ask the person for portrait! Sounds easy, doesn’t it? For me it’s still not easy, but when I see a chance to take a stunning portrait which doesn’t work as a candid shot, I force myself to ask for a picture. A few months ago I set up this rule and even now I’m sometimes scared of the answer ‘No’. But I was fed up with the situation where I think 10 or 20 minutes about a breathtaking moment, which I could have captured, but I didn’t, just because of a simple unsaid question. There is always an excuse, the moment does not seem to be right for your ‘model’, maybe they’re busy or the person already looks grumpy so I believe my chances are already zero. Without asking you never know!

Language barrier is never an issue when you approach somebody for a picture, you can point at your camera, everyone around the world is aware you are taking a picture. Otherwise I couldn’t have taken a single shot for example in remote areas in India and in most of the places in Turkey and South East Asia. The portrait is maybe all about the person for the viewer, but in the moment you take the photograph, it’s also but your interaction, your own personal relation with the person. Whether you speak their language or not, being polite by making a small bow and ask the person with a smile on your face helps big time. Maybe the person is shy or needs to gain more trust, then show a view images of your portfolio on your smartphone. Or show pictures that you already took that day on your camera, this especially helped me in some small villages in India because when the people there spot their friends and relatives on your camera they opened up most of the time.

From the technical side you should keep in mind what you want to frame. Which focal length would suit the person as well as the moment best? Which parts will be sharp with the chosen aperture? Will the auto focus work in the given light conditions or is it better to use the manual focus because you have back light, or is it a group of excited children which will most likely move so continuously AF might work better? Be aware of the settings you choose before you ask somebody, most often you don’t have more than a minute to produce a picture.

But even with the best preparation, something can go wrong. Most often you’ll realise that when you view your image on the screen of your camera and without even thinking about it, you’ll most likely lose your smile by looking at an unpleasant result. Keep your smile, because otherwise the person may lose the confidence in your work. If you both speak the same language, tell the person you choose another setting or be honest and tell your ‘model’ you messed up the picture, if you don’t speak a common language simply point on your camera and take another picture with improved settings.

The same applies if your picture doesn’t show the elements you want do draw attention to, don’t hesitate to change the focal length or your camera angle. If it’s about the person, for example the person is not smiling or laughing anymore, tell a joke or to share a smile with your ‘model’. Don’t forget they are not paid and experienced models. For them it’s a new and maybe uncomfortable situation, your mission is not only to take a picture but also to make them feel comfortable, so interact with them and don’t just hide behind your camera.

If you got the final shot don’t forget to say thank you and to show it to them if you take digital pictures. If you have more time in a small city or village, print the picture for the person, to see there face is the best reward for your work you can get in my eyes.

My last tip for a good portrait is not a general one, it is based on your way of photography. I like to take pictures of a person in there environment. But if it’s all about the face and you have the chance to move them to a position with better/softer light then, why not? Close to a wall or, even better, in the doorway of a building keeping a certain distance from the entrance with its hard light, you will create soft light on the face of the person, plus you get an awesome catch of the lights in their eyes.

They are warriors of the old days and famous for their tattoos. I took the picture approximately one meter away from the main entrance of his house. 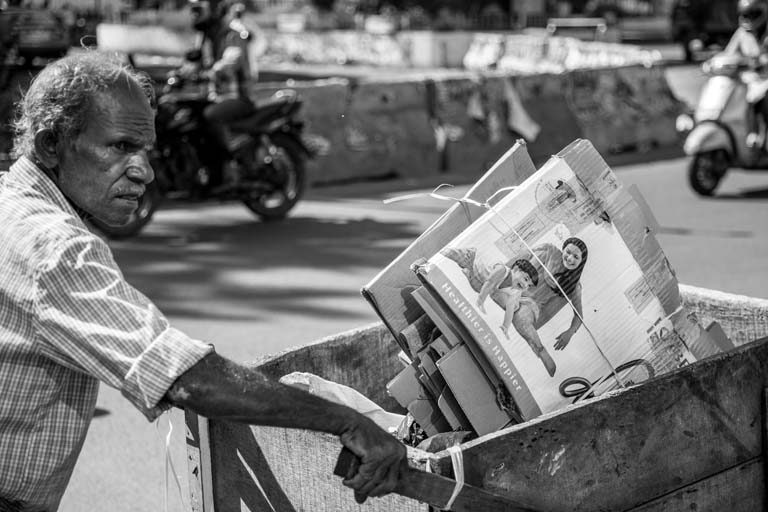 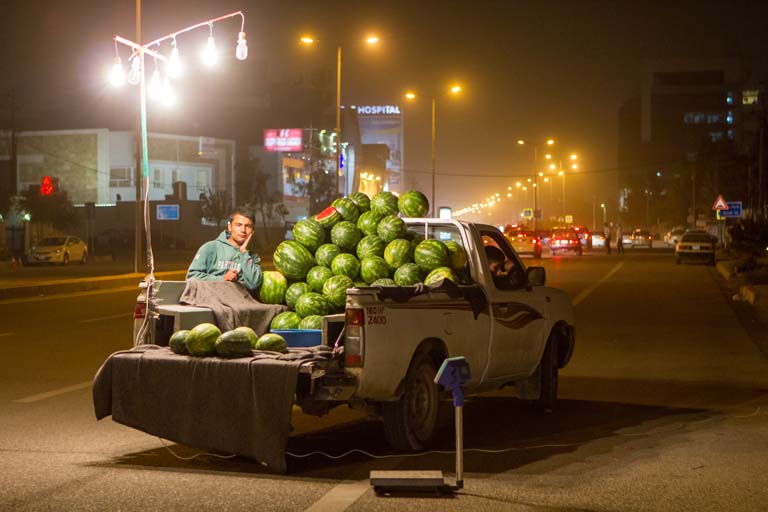 Show what you see and experience, a few months later the ‘Islamic State’ was close to Erbil and pictures that I saw that time on the media portrays a picture of a heavily underdeveloped country, which is not what I found over there. 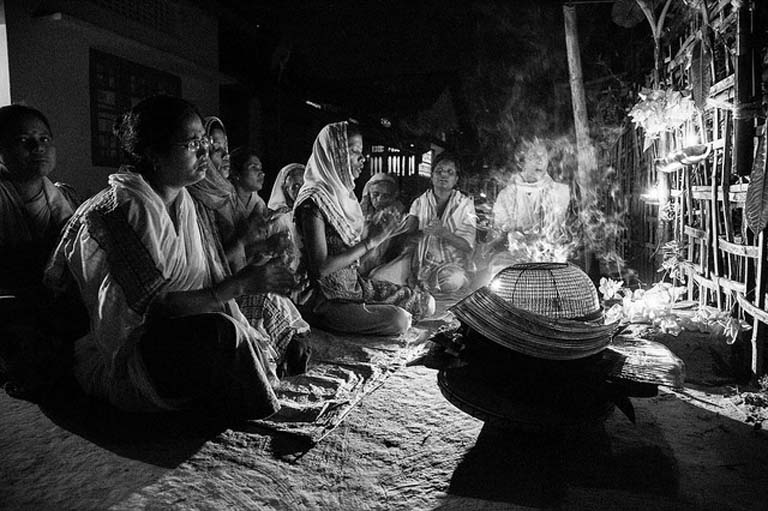 This was a small festival mostly celebrated by the women of Majuli Island in Assam, India to pray for a good harvest.