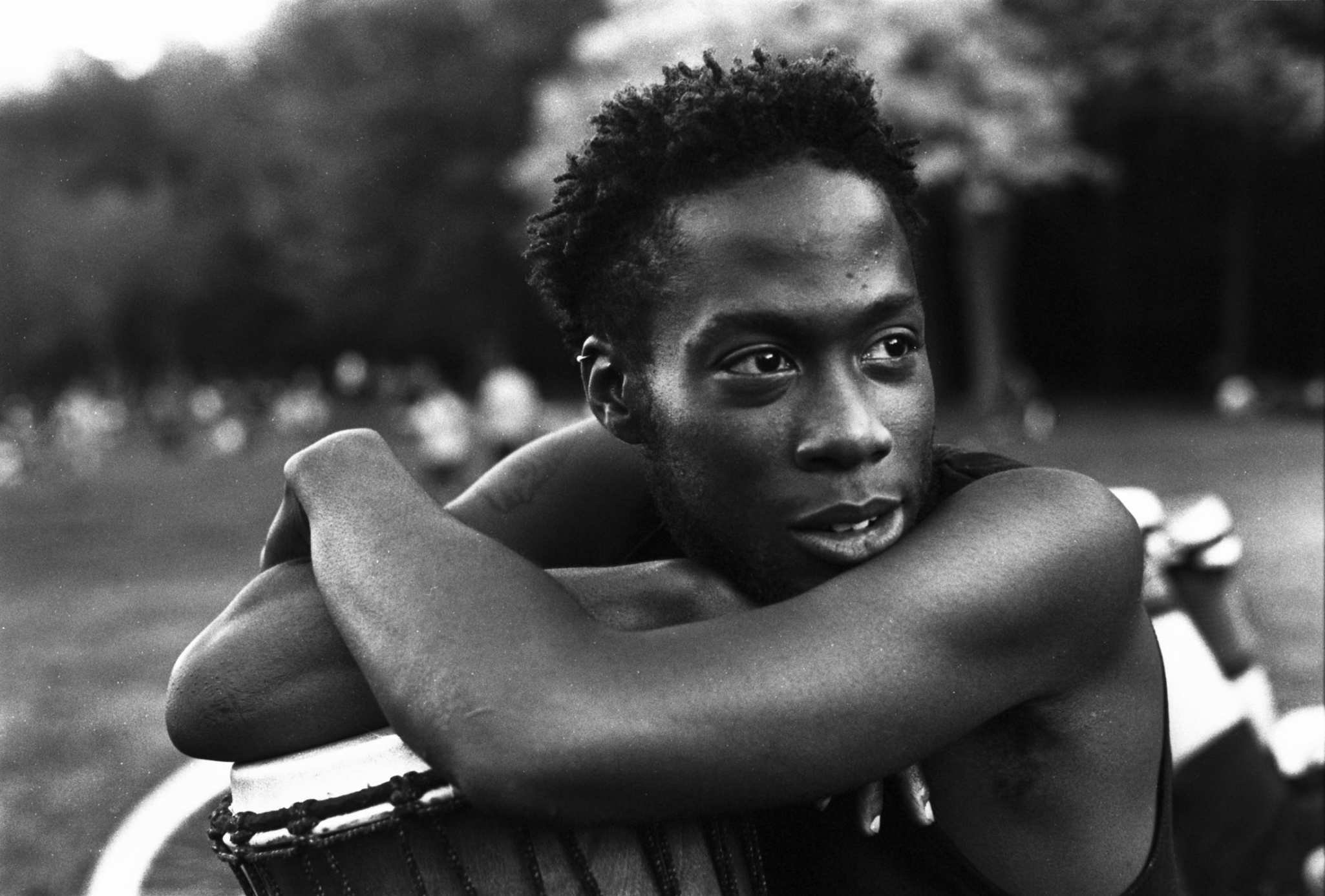 I live in a dull corporate town called Stamford Connecticut which is a 45 minute train ride outside of New York City. Being a musician and having interest in the arts if a very difficult task around here. You play for your friends and you are only accepted at 10 percent of the local bars. However you start to become a regular and gain respect one way or another with a certain crowd. People also thought I was weird because I photographed random strangers but now people love it.

I started taking pictures to replace the act of writing in a journal. It was giving me too much anxiety trying to keep up with it. I started with 35mm film and my teacher Joan Fitzsimons let me run the dark room as a lab monitor. Seeing a photo develop for the first time was magical.  My second photo teacher (Yale Graduate) Curran Hatleberg, gave us the assignment to start photographing people we did not know. I thought it was a stupid assignment until I took my first “stranger photo.”

The man with the beard! I hopped on a train with my friend Max to NYC and walked from Grand Central to the East Village. I was nervous but felt excited and as soon as we walked past a group of what looked like homeless people, I got asked for a dollar. I said, “Of course but as long as a can I can take your photo!” The man said, “Why not” and let me take it. The guy with the long beard and potato chips has a sparkle in his eyes that kept telling me he was the most genuine feller out there. I was addicted to the fear and unknown of what 35mm stranger photos could give me!

After developing this film and seeing this image I knew I needed to shoot more. So I started hanging out with a couple of greasers and walking the streets of my home town. They would encourage me to take photos of people and we had a blast walking through different neighborhoods. To this day I still do not understand why I photograph certain people other than the fact that they will make a good picture. I describe my shooting style like a Nirvana song. Perhaps there is no meaning, but to just enjoy it!

Four images I’m sharing are from Connecticut, two are from NYC, and two from Montreal. The second image from NYC is an image of a man and kid both resting their face on their hands the same way. I remember my teacher Curran showing us a William Eggleston photo in which two men are mimicking each other in the way they stand. One is a nicely dressed business man and the other one is assumed to be his chef/butler. Upon walking in NYC I saw this man resting his face on his hand looking very bored and the kid (assuming it was his son) was doing the exact same thing. I laughed and took the photo. The man laughed but the kid still looked pissed. I walked away knowing I just captured another one of my favorite images to this day.

One day walking around with the “greasers” we were downtown on Bedford Street in Stamford. My friend Josh said, “Look at the Indian guys over there stuffed onto a bench, take that photo!” He read my mind because before he spoke they reminded me of a Gary Winogrand photo where a bunch of people are on a bench in Central Park making all kinds of gestures. Now, I’m not comparing myself to Gary at all but I’m definitely using him as an influence. I thought it was hilarious that these guys would stuff 5 big dudes on a bench like that and reminded me of pure friendship. I asked for the photo and of course they said yes!

Now being in a smaller town/suburb sometimes I think the person I’m photographing is a total stranger but ends up not being a total stranger. The Irish looking guy with his dog was taken at the ST Patty’s Day parade that is held every year except during this awful pandemic. So I post my photos to Instagram and facebook a lot and my friends will see it and I find out this guy ends up actually being related to my friend Alli. It is very funny because this has happened multiple times before where people recognize the people I photograph.

The last image taken in Stamford is the image of the crazy head tattoo. Now my friend Maiko has a lot of friends that visit him all year round and I get to meet them. Most of them are from Maine and also play music! This was my first time meeting Ryan and to me he was a still a stranger so I got nervous when I asked to take his photograph. It was a 100 degree summer day at the beach and we stood out like sore thumbs. Now speaking of music the image of the kid with spikey hair was taken in New Haven. My band Hosemen was playing a garage show and I always bring my camera with me everywhere I go. I haven’t seen spikey hair like this since middle school and this kid’s girlfriend was gorgeous so I just simply asked to photograph them. They leaned in and posed and my teacher Curran said never to let someone pose if they do just ask them not to. So I did exactly that and usually it is awkward at first but sometimes that awkwardness give a genuine portrait. I learned to never let someone pose unless the pose is absolutely ridiculous and genuine in itself.

The last two images are from Montreal which is a beautiful clean city with beautiful people. My friend Justin and I stumbled upon a group of kids smoking weed outside of a bar one drunken night. We ended up bar hoping all over town with them and the next day they invited us over to hang out. We ended staying over until 6 am and I did not bring my camera because we arrived at night and I did not know we would have stayed till dawn. I was so mad at myself because the sun light looked so good on these kids and I missed so many opportunities. Missing opportunities crushes my soul because there is a desire in me to photograph what I think will make a good photo. For this reason I bought a cheap point and shoot camera to carry around for next time when the bars are open and I am traveling again! So the next day after getting 4 hours of sleep we headed to Mont Royal Park to say our goodbyes and hang out one last time. I brought my camera and photographed this beautiful kid resting his head on his drum (top image) and I photographed Charlotte (who we both adored and was considered the mom of the group) with her boyfriend.  This was a recent genuine moment of befriending people, sharing alcohol, playing music, spreading love, and gaining experiences that I will never forget.

“Street photography helped me open up and overcome fears.”

Street photography helped me open up and overcome fears. It helped me create memories and meet lovely people. I can’t wait to look back at my negatives when I’m 90 years old and shed a tear of joy from the great memories I captured. Photography is magical in that sense.