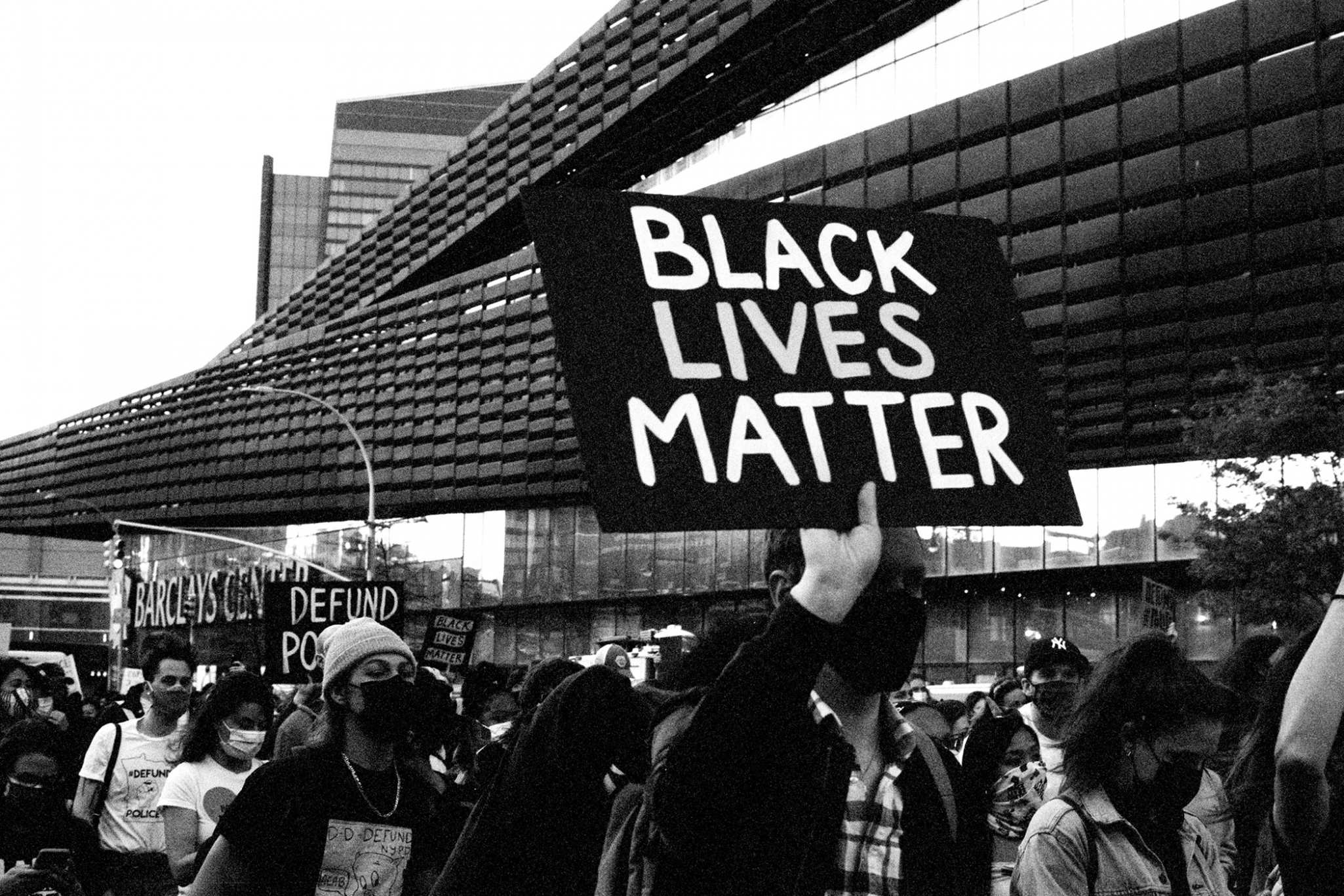 I have been a professional photographer for twenty-one years. For the last six of those I have been documenting the Black Lives Matter Movement in New York City for my series Mic Check. The title comes from the practice of protest leaders shouting “Mic Check” to those in the crowd to signal that they have something to say. Once the message has been given by the leader, the members of the crowd repeat it loudly like a game of telephone so that everyone can hear without the need for any kind of artificial amplification like a bullhorn. It is a very effective way to get a message out to a large group.

These events opened a tidal wave of outrage over the killings of African Americans at the hands of the police. Protesters continued to take to the streets, over and over, for a long litany of names of those killed during interactions with police: Akai Gurley, Tamir Rice, Freddie Gray, Sandra Bland,

Jamar Clark, Philando Castile, Terence Crutcher, Botham Jean, Stephon Clark, and Eric Logan, among many others. People took to the streets to protest against both the Grand Jury decisions themselves, as well as police brutality and racism in general. From these protests the Black Lives Matter movement was born.

The largest of these protests garnered huge amounts of media coverage. But there were also many smaller protests that received little to no media coverage. Following the hashtag #BlackLivesMatter on Twitter as a starting point, I began to track and document both the large and small protests in New York City.

Even when the crowds thinned out between the largest of the protests which sometimes involved thousands of people, there was a group of dedicated organizers who continued to take the streets with smaller groups of protesters to continue. Their goal was to not let the message of the movement be forgotten, and to make sure those who saw them know that they were still there and fighting for justice. Some of these protests were just a few dozen people, but they kept going. And where they went, I went, too.

As a blond haired, blue eyed, white male I also knew that what had happened to Michael Brown, Eric Garner and so many other African Americans would never happen to me because of how I look. I have never feared the police, or worried that an interaction with police would lead to my death. Those scenarios had never crossed my mind. But I knew that I had my cameras, and I could use them as a tool to try and create a story about the issues between the police and African Americans through the photographs I could make.

My work has always been long-term looks into stories that lay on the edge of journalism, documentary and art. While my photographs have been published, it is almost more likely to see them on the walls of college and university art galleries where they are used to engage students about both photography and current events. I have a Master of Fine Arts degree, but strictly adhere to journalistic standards and a photojournalist’s code of ethics.

I know that as a photographer, the chances of my photographs changing a viewer’s mind just by seeing my work is rather slim. Very few photographs in the history of the medium are powerful enough to do that. I am also acutely aware that my photographs are an expression of how I empathize with the world and how I relate to what I see. But I am not trying to create an epiphany in the minds of those who see my photographs or try and force them to think and feel the way I do about what I capture in my viewfinder. Rather I am trying to create a way for people to think and talk about the subjects that I cover. And to me that is what good journalism is: not telling people what to think, but rather giving them the facts and information they need to think on their own.

Now the protestors have returned again over the death of George Floyd at the hands of four police officers in Minneapolis. Minnesota. And with the return of the protests, I too have returned to the streets to document the movement. My camera bag has always been packed and ready to go: 2 or 3 camera bodies, a selection of lenses of various focal lengths, and as much film as I can carry. But in a world where Covid-19 is still running rampant, my kit now also includes masks to help prevent the spread of the disease, and I now practice social distancing with those who I am photographing.

What I have been acutely aware of as I am out photographing is that this time the protests feel different then they have in past. Not only are the crowds bigger than I ever remember seeing, but their longevity and sheer number of individual protests is greater than anything I’ve experienced before.

After previous waves of protests there were very few concrete results. Police officers are still arresting and killing African Americans at an alarming rate. Police departments have made some changes to their training regimes and added body cameras, but the effects of these changes on policing appear minimal at best. The incidents of police violence around the country do draw more scrutiny in the press and are quicker to show up on the news. But still very few police officers ever face real consequences for their actions, or any jail time, though that is slowly changing as well.

But now it seems like the protesters are making some real changes happen. The police officers who killed George Floyd were quickly fired without dragging the incident out. Various cities, including Minneapolis and New York, are looking to work to defund the police forces by taking money from their budgets while at the same time rethinking how and who should respond to incidents that don’t involve violent crime, such as mental health issues and re-thinking who should police school grounds. New York City has also taken steps to make the police force more transparent and allow for those outside of the department to review police misconduct files that were previously hidden from the public. These are small steps, but they are steps in the right direction to correct the history of both police violence as well as the systemic racism that has gone on too long.

So as the protestors march on, I will continue to show up to document what happens. The Black Lives Matter movement is a new chapter in the greater Civil Rights Movement in the United States. It may not be the final chapter in the struggle for equal rights, but it will be an important part in its history. The full story of the Black Lives Matter movement hasn’t yet been written. But I will keep photographing to try to get at least the first draft of this chapter of history from where I stand and what I see. For me this is about creating a record of what happens now so that in the future there will be something for those to come after to reference when the full story is written.