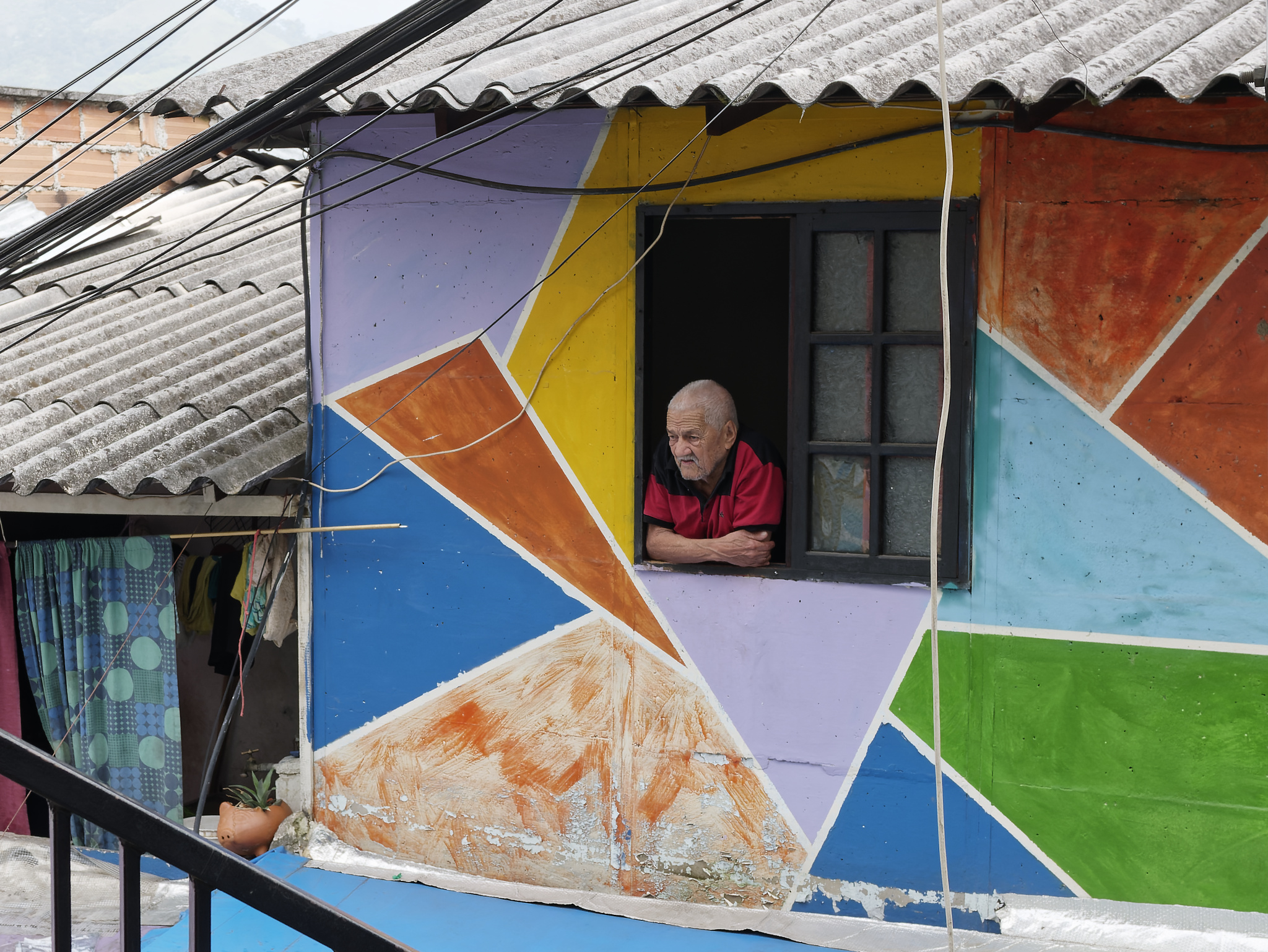 The Comuna 13 of Medellín is an extraordinary place with a remarkable history. Throughout the 80s and 90s, not only was Medellín considered the most dangerous city in the world, but Comuna 13 was its most dangerous neighbourhood. Now famous for its murals, Comuna 13 symbolizes the social and security transformation that Medellín has undergone since the Pablo Escobar era. It is undoubtedly one of the best places to visit in Medellín, and through this short photo essay, I want to give you a small taste of it and encourage you to come to Medellín and see it for yourself.

The Comuna 13 is located on the steep hillsides in the northeast area of Medellín. It was built in an informal and unstructured way, a sort of shanty town or favela made without consideration for building codes or any sort of urban planning. Its founders and builders were primarily former farmers displaced from their lands by guerilla groups like the FARC and ELN during the height of the civil war. Because of its steep hillsides and difficult access, Comuna 13 was highly isolated, a fact which helped shape its peculiar history; it quickly became a haven where criminal groups could operate in complete immunity.

Pablo Escobar saw an opportunity and, as he often did in the rest of the city’s poor neighbourhoods, he started to support the people of Comuna 13 generously. He was known for building houses, schools and football fields in other communities, but none of that was possible in the hard-to-access Comuna 13. Given that kids growing up there had no education and no economic opportunity, it became fertile ground for Pablo Escobar to recruit assassins, and he completely controlled the place. Nobody could enter or leave without him knowing. When Escobar died in 1993, his criminal structure became orphaned within the Comuna, and they had no way to support themselves financially. Since the governments had long before turned their back on this informal and highly criminal community, various other criminal and guerilla groups took the opportunity to move in, and they started fighting each other for control. Over the following years, Comuna 13 became so dangerous that it gained a reputation as a black hole that many entered but few left.

In October 2002, then-President Alvaro Uribe had enough, and he launched Operation Orion to remove the criminals and guerillas and clean up Comuna 13. After a long period of intelligence gathering and planning and with over 1500 military personal, along with armoured vehicles and attack helicopters, the government’s forces moved in. They killed or detained most of the criminals. Still, they did it indiscriminately and at a very high civilian cost. Some 80 civilians were injured, and while the government will not admit to it, some 200 were reportedly quietly disappeared. A painful fact that to this day remains entrenched in the community’s memory and is one of the main themes of its painted murals. Those murals often depict helicopters, guns, and elephants as a symbol of extended memory. The words “nunca olvidar” (never forget) are often seen on those murals as well, and a make-shift monument was erected where the bodies are believed to have been buried.

Operation Orion, despite its gruesome results, was a turning point for the battered community. The various levels of government finally started investing in Comuna 13 by implementing services and building infrastructure. The city of Medellín even won several international prizes for innovation in urban and social planning. The first crucial transformational project was the construction of a Cable Car (gondola) that links the high community down to the main metro line at the bottom of the Valle de Aburra in which Medellín sits. This transportation method opened access to education and employment opportunities for the Comuna’s inhabitants. This “MetroCable” was so successful that Medellín has since built 4 more lines and is planning a 6th one.

The first MetroCable was followed by constructing several outdoor electric escalators to help the population deal with the incredibly steep hills their community is built on and the general lack of proper streets. A large school was built at the foot of Comuna 13, and the government of Spain donated and constructed an extensive modern library right at the end of the MetroCable. The municipal government also implemented several community programs to foster education, arts, jobs and social inclusion. Many more small streets are currently being built on stilts on the hillsides to improve the movement of goods and people.

These changes have had a profound impact on Comuna 13 and its people. As educational and economic opportunities improved, poverty started going down, and crime rates plummeted. Like it is often the case with a community that has long been oppressed, the people of Comuna 13 expressed themselves and renewed their community through art. The many walls of Comuna 13 have been covered with impressive paintings that are often too elaborate and sophisticated to be called graffiti. Mural subjects include the Comuna’s traumatic past, racism, portraits of notable residents, and the joy of living here today. Many urban musicians and dancers came out of the Comuna or have been inspired by it, as have many authors. While the people of Comuna 13 were undoubtedly doing this for themselves, this has unexpectedly turned Comuna 13 into a tourist hot spot.

Thanks to this renewal, Comuna 13 is now safe to visit, and it has become Medellin’s number one tourist attraction. Dozens of formal and informal tours are on offer, and before the pandemic, an average of nearly 2,000 tourists would visit Comuna 13 every day. Many of the creative inhabitants of the Comuna saw an excellent opportunity to earn a living without leaving their community. As a result, dozens of small shops, souvenir stands, restaurants, street-food vendors, bars and tourist attractions have opened up. This is both good and bad, in my opinion. Of course, it’s excellent for the Comuna’s inhabitants. Still, it does take away some of the Comuna’s original charm, and it can be unpleasant at times to constantly be offered food or drinks or souvenirs. Although I have to admit, they are generally respectful and not as insistent as I have seen in other tourist areas. However, there are reports that the local gangs have quickly ceased on this opportunity and now demand “protection” payments from those new businesses and tour guides. Despite all the improvements, the people of Comuna 13 are still fighting crime, poverty, and racism.

I visited Comuna 13 as part of a photo outing with the local photography club, and we went earlier than the tourist tours. We arrived at 9 AM, before the heat settled in and before the tourist tours started coming around 11 AM. I felt safe the whole time and would not hesitate to go without a guide if it wasn’t for the fact that I would probably get lost as the place is an absolute maze. The Comuna is a complete feast for the eyes and ears with its innumerable painted murals and stairs and the numerous singers and dancers earning a living on its streets. It is an explosion of colours, sights, and sounds; out of the death came a blast of life and culture. In less than three hours, I was able to take over 150 pictures; all the photos attached to this article came out of that one outing. I believe it was the first time that I managed to get a whole photo project out of a single visit. I felt inspired as an abundance of interesting subjects were all there for the seeing.

I found Comuna 13, with its remarkable history, its friendly inhabitants, and its art, to be a fascinating place. I plan to visit it regularly as I will undoubtedly encounter many more photographic opportunities and cultural wonders.