Diary of a Pandemic 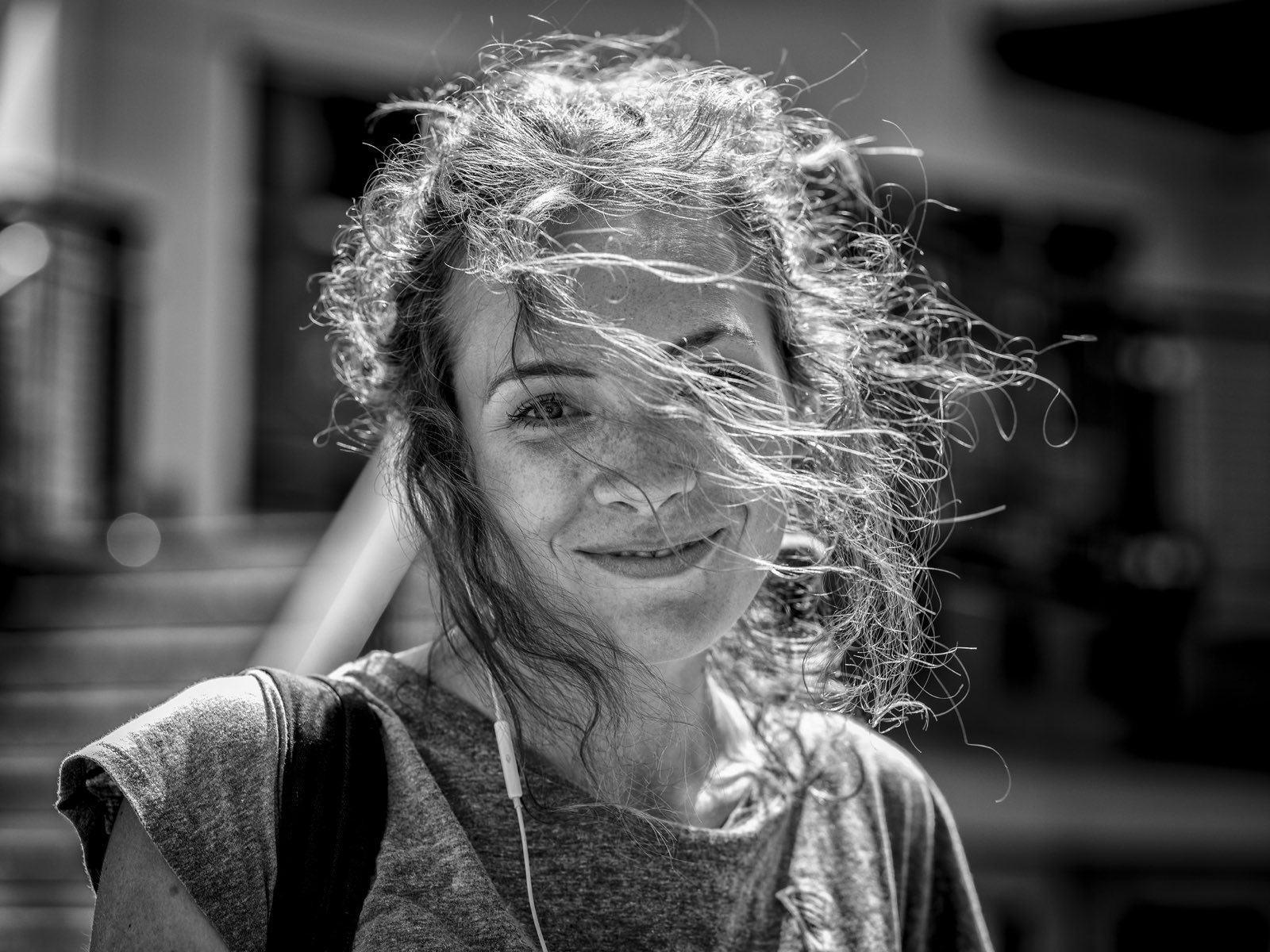 This is the second article in a series about street portraiture. The first, Street Portraiture for the Faint of Heart, was published in the December 2020 issue of Street Photography Magazine.

Once you’ve found the courage to approach a complete stranger about making their portrait on the street, here are some guidelines for making the most of it.

I won’t get into this in any great detail because after all, the gear decision depends upon your own personal vision, style and budget. But master street portrait photographer Harvey Stein preaches using a wide lens to show the subject in context. In fact, he carries two cameras on the street, one with a 24mm and the other with a 21mm. After taking a class from him last fall, I purchased a 21mm equivalent for my Fuji bodies (the Fuji 14mm 2.8) and it’s been a game changer. But, that’s just me…you, of course, may have a different vision.

Here are two great examples of photos where the photographer used a wide lens to capture context in their portrait:

The background can make your shot or kill it altogether. In our haste to make the photo and not encroach on the subject’s time we often develop tunnel vision and ignore the background…only to regret it later. So before you shoot, make a quick assessment of the area and decide where you want them to be.

Look at the shot through the viewfinder and look around the edges. Are there any obstructions you didn’t notice before (like a light pole protruding behind their head)? Is it busy and chaotic? Are they backlit? Are there any bright spots? Are there other people in the frame? Does the background compliment the subject or distract from them? And of course, open shade is best (but not always).

Then, do you want to photograph your subject within the environment – meaning you want the background to be sharp (or at least not blurred)? Or do you want to blur it out?

And by the way, you’ll want to make these decisions very quickly. That’s why it helps to consider them and the matter of open shade before approaching your subject.

One lesson I learned recently is that if you plan to pose your subject near graffiti, read it first. One bright sunny day, I made some portraits under a bridge because the shade was really nice.

In my haste I didn’t read the graffiti. When I processed my favorite photo from the day I noticed some very offensive graffiti in the frame. I didn’t want to lose the photo so I had to do some trickery in Photoshop to obscure it. Lesson learned.

The Elements of a Great Street Portrait

With any great portrait, whether made on the street in a few minutes or in the studio, what are the elements that make you say “Wow!” to yourself?

Of course lighting and background are always critical. Assuming you have that nailed at the start, pay attention to these three things as you frame your shot.

The eyes are always the most important element in the portrait. That’s because they are truly the “window to the soul.” We’re programmed to look into the eyes first. Unsharp eyes can kill an otherwise great portrait.

Always, always make sure they are sharp. If the subject is turned so that one eye is closer to you, make sure that one is sharp. So be careful about using a wide aperture (especially with a longer lens) as your chances of missing focus on the eyes increases.

In this portrait by Frank Blazquez, does the subject have a forced grin on his face or does he appear deep in thought?

In “Migrant Mother” by Dorothea Lange, what is the migrant woman doing with her hands? Is she holding them rigidly at her side or do they naturally compliment her expression?

Pay close attention to these things and you’re on your way.

I’m not a big fan of posing people. Instead, I prefer them to stand or sit the way they do naturally. That said, it is still important to give your subject gentle yet firm direction. In fact, most people want you to tell them what to do.

So, before you shoot, think about what you expect as an end result.

Most people don’t know what to do with their hands when being photographed. So they either hide them, cross their arms or do the old fig leaf pose. So observe what they do with them and make some suggestions about how they can use them to enhance the photo.

At minimum, make sure they are in the frame (not in pockets or under armpits) and not cut off at the wrist.

Here is a portrait by Hal Padgett, which is enhanced by how the subject is holding his hands:

Remember, you are responsible for everything in the frame.

Tell Them Where to Look

Pro tip: Street portrait photographer Sal Patalano asks his subject to look into the camera and to use only their eyes to tell him about their life.

As you can see, the results are stunning.

Don’t Pass Up an Opportunity

If you spot an interesting subject in a good location, don’t pass it up thinking you’ll do it later. Either they won’t be there, the light will change or you’ll forget.

For example, a couple weeks ago I was walking through our downtown mall to shoot to the Farmers Market on the other side of town. I was in a hurry.

Then an interesting looking guy in a white jumpsuit thing called out to me from across the street (I live in a very friendly place). My first inclination was to wave and keep moving, but I began to wonder what’s with the white suit.

I stopped to chat a bit and learned that he’s a barber and he wears the jumpsuit to keep the hair off his clothes. He looked really cool and the light was perfect so I asked if I could make his photo. He reluctantly agreed so I made a couple wide environmental frames then a couple close-ups to highlight his eyes.

He made me promise not to use them on social media but has since agreed to let me use them in this article. The following week I went back to have him cut my hair. He’s really good, so now he’s my barber.

Later I sent him copies of my favorite photos from the shoot. He loves them.

When I visited his shop recently, I saw that he framed one of my photos and placed it on a shelf in full view. I was thrilled that he thought enough of my work to display it to his customers. I made this photo with my iPhone for my own collection.

Had I kept walking that day I would have missed out on an excellent photo opportunity, a good barber and a new friend.