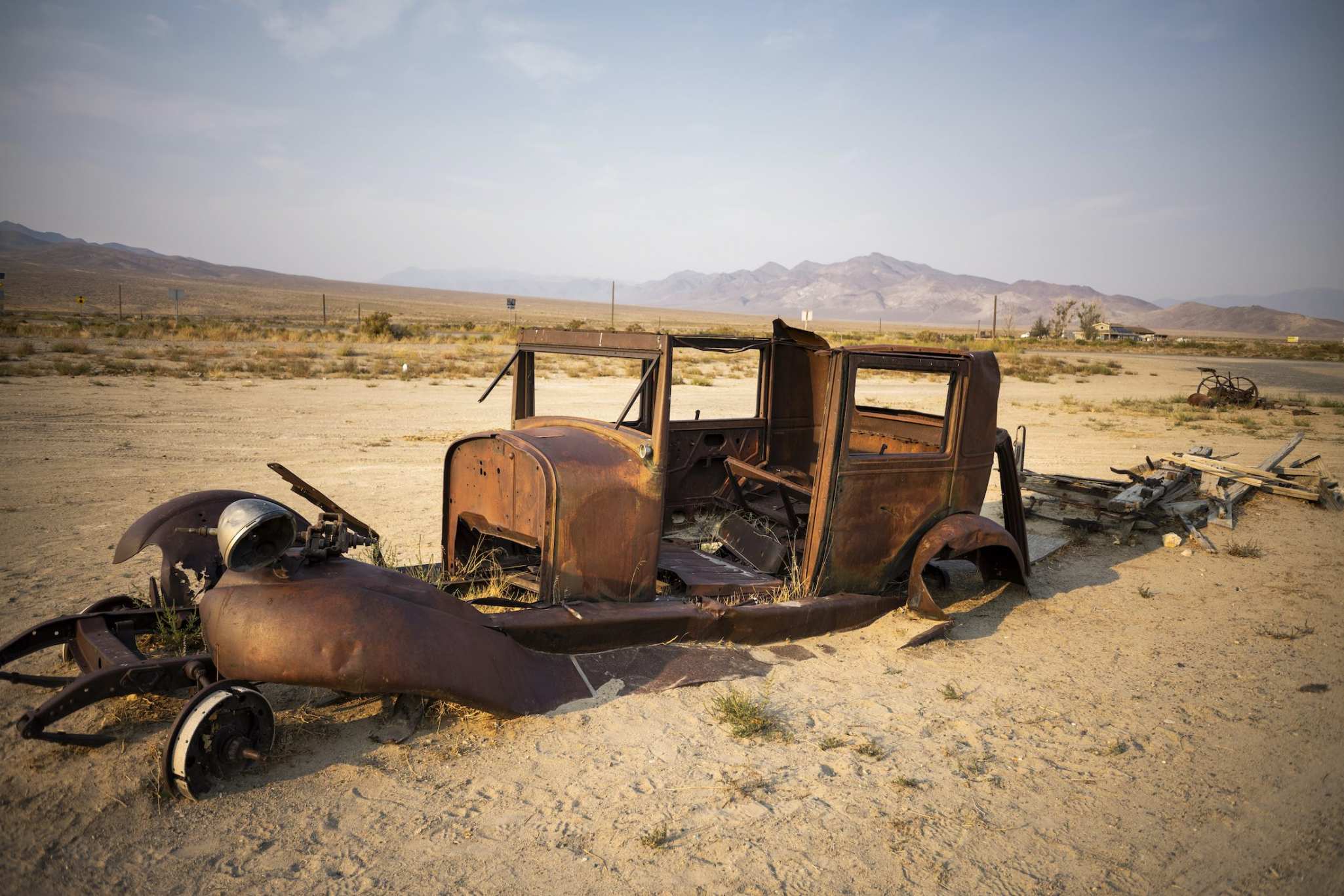 There aren’t many options these days for a street photographer with cabin fever, so I planned a socially distant road trip to the “Loneliest Road in America”: US 50 in Nevada.  Like its more famous cousin, Route 66, US 50 was a major cross-country thoroughfare in the days before interstate highways, following the route of the original Lincoln Highway and before that, the Pony Express. But by the 1980s, Life Magazine disparaged this 287-mile stretch across the Nevada high desert as the “Loneliest Road in America.” Life quoted the American Automobile Association: “It’s totally empty. There are no points of interest. We don’t recommend it. We warn all motorists not to drive there, unless they’re confident of their survival skills.” Nevada tourism officials pounced on the challenge, issuing maps and a “survival guide” to the historic byway. For me, the Loneliest Road sounded like an ideal intersection of photo ops and social distance. I set out from the eastern end, in Ely, population 4,000. Among Ely’s photographic attractions are some great vintage neon signs dating back to US 50’s heyday.

Based on the “loneliest” designation, I decided to traverse the entire Loneliest Road in a day, expecting mostly emptiness. That was a miscalculation. Next time I will slow down and spend more time in the friendly, intriguing communities along the way. After a hearty breakfast in Ely I set out. The next outpost of civilization, Eureka, is 78 miles to the west. For the better part of an hour the road is desolate, winding through sagebrush with 10,000-foot peaks on the horizon. The only signs of human presence were a couple of roadside memorials – for some, the loneliest road was their last stop – some tumbledown stone ruins, and an occasional herd of grazing cattle.

Eventually I arrived in Eureka, population 500, “The Friendliest Town on the Loneliest Road in America.” During a silver boom in the late 19th century Eureka swelled to 10,000 residents. Some impressive buildings from that era remain, including a restored opera house. For the photographer, Eureka provides an interesting mix of abandoned establishments and quirky but genuine Wild West enterprises, including ubiquitous-in-Nevada saloons and casinos. In this part of the country the local saloon isn’t a historical artifact but part of the fabric of everyday life. With a bit of searching, you may even be able to rustle up a few colorful locals to shoot.

Seventy miles west of Eureka and only half its size is Austin, Nevada. Austin has more abandoned buildings than Eureka, and they’re more decrepit. When I rolled into town around 3:00 PM looking for a late lunch there was only one shabby roadhouse open, the International Café & Bar. The menu was skimpy, but to my surprise the food was good. The building looks like a pile of weather-beaten boards that might have come from a lumberyard tag sale, but there’s an interesting story: the old planks once constituted the International Hotel in Virginia City, which opened before the Civil War. As that business grew, the original wooden section was dismantled and reassembled in Austin, where it has remained since 1863, truly a relic of the Wild West.

After Austin there’s not another town until you get to Fallon, 111 miles down the road. In the interim, only a couple of watering holes built on the sites of long-ago stagecoach and Pony Express stops interrupt the loneliness. Fifty miles out of Austin, Cold Springs Station was once a major stagecoach depot, with comfortable accommodations for both people and horses. The old station’s ruins can still be seen. Nearby is a modern oasis with a restaurant and bar, as well as spartan rooms and an RV park. Judging from the taxidermy decorating the place, hunting is good in these parts.

Continuing west another 14 miles, you arrive at Middlegate Station, the next Pony Express stop (riders changed horses every 10 miles or so). While Cold Springs is comparatively modern, Middlegate has a funky desert vibe, decorated with all manner of obsolescent Americana: rusted out automobiles and farm machinery, a phone booth, a coin-operated mechanical horse of the type that once was installed in front of every American supermarket. Guests in the sketchy motel out back scurry away when approached by a camera-toting tourist. Middlegate has real photographic potential, but alas, on this trip the light was quickly fading and I still had a two-hour drive to my hotel in Carson City, so I didn’t linger.

With the sun sinking quickly, I paused only briefly in Fallon, a small but modern town, home to a major Naval Air Station. Downtown Fallon has some interesting small businesses, along with the usual casinos and bars. After Fallon I drove the last 60 miles to Carson City, the state capital. US 50 continues, but it’s no longer lonely. At some point between Fallon and Carson City you leave the wild west behind and reenter 21st century America.

If you go, a couple of tips if you want to try this yourself.