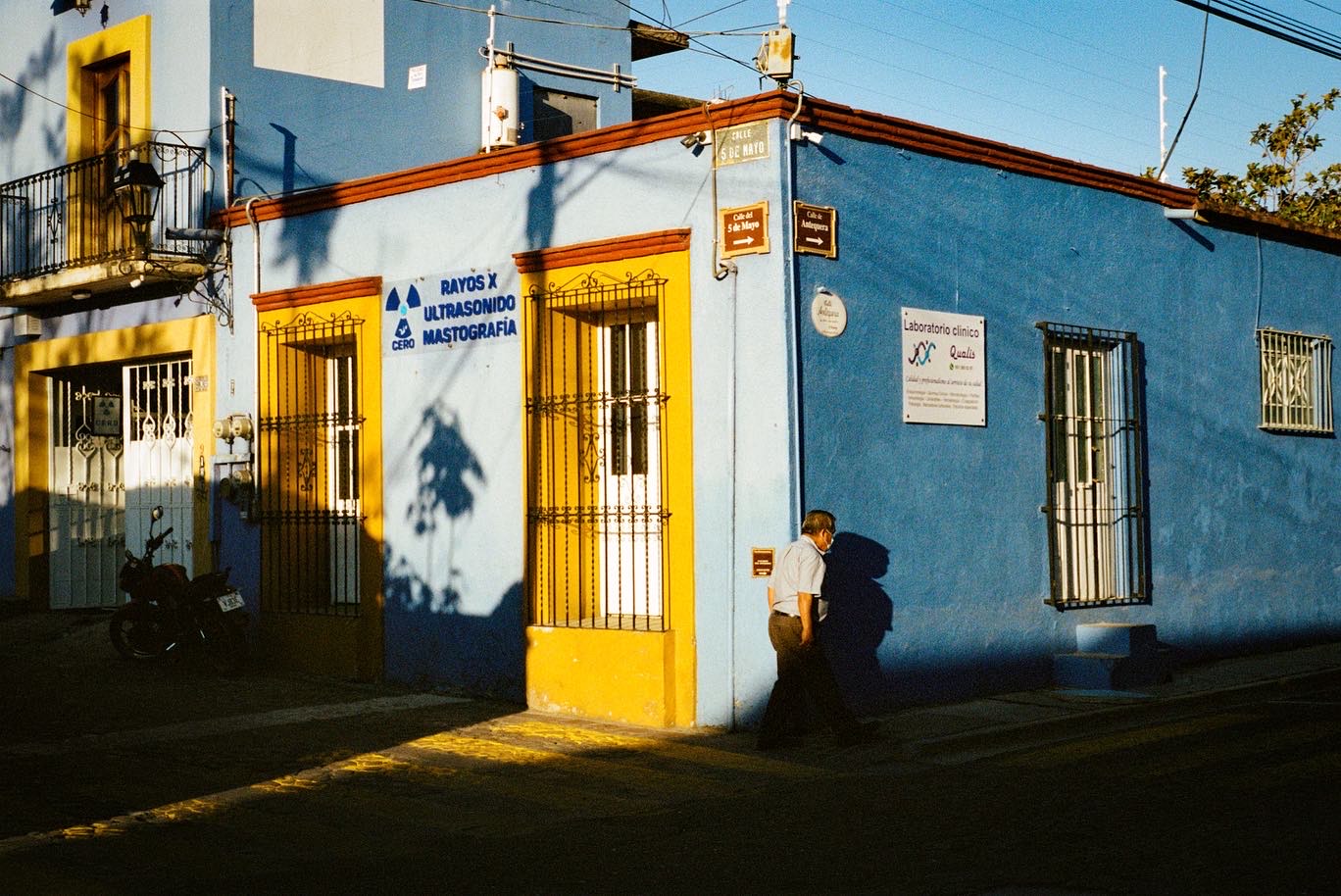 “Las Calles” translates to “the streets” in Spanish. This photography series seeks to capture the visceral rhythm, orchestra, color, and energy of daily street life in Oaxaca, Mexico. Group fitness classes, eating on plastic stools by your favorite taco truck, bargaining with the merchants for the freshest queso of the day, carrying sacks of agriculture, selling balloons, chatting, and simply living amongst each other – all done on the streets. The plazas, the parks, the streets – serves as a communal backdrop of a promising land where we can all co-exist and get along with one another. Collages of moments in time – the vivacious orange tint of the passionfruit loaded into the shopping bag by an elderly woman in the ‘mercado’, the pitchfork digging into the ‘maguey’ root ready to be pummeled into the roasting pile for mezcal production, and the laughter and screeches of the children playing football in the ‘zocalo’.

This was the first international trip I took since the pandemic started. I had heard about Oaxaca when I traveled to Mexico for the first time in 2017 on a solo trip after graduating college. I was making my way to Campeche through Mexico City airport on a layover. Setting my bags down to charge my phone, I ended up striking a conversation with a stranger next to me. We talked about the solo trip we were both embarking on, and what I vividly recall was his glow and aura of complete and utter happiness. “Where did you just travel from?” I asked. This man was on his way home from his trip to Oaxaca and could not hold back his effusive and ebullient admiration about the incredible time he had in this place. I’d never even heard of Oaxaca and couldn’t even spell it at the time. Something that he mentioned repeatedly was the color of the town. How vibrant and vivid it was. “Oh, and the food, it is world-class and inarguably the best cuisine in all of Mexico.” That encounter instilled a curiosity about Oaxaca and remained in the back-pocket of my conversations anytime the subject of Mexico came up.  “Yeah, I’ve heard of Oaxaca, this stranger I met in the Mexico City airport told me about it”.

Fast forward 5 years later, that memory remains in the back of my mind. If there was anything I wanted to see after having been stuck within borders during the pandemic, it was a rich color palette, authentic and natural cuisine, and a sense of community. I had everything booked for Puerto Rico – I sided with caution to remain within US borders, but this memory continued to reverberate. I ended up changing everything last minute to travel to Oaxaca instead. I wanted to push myself outside of comfort lines, decidedly unshackling the confines of being locked up long enough. The intrigue of foreign language, culture, customs, ways of living – I wanted to see it all and live in it again. As I began arranging travel plans, I realized there was something much deeper that I wanted to capture. I was so drawn to Latin countries, to the point I wanted to go out of my way to travel and bring my cameras with me, because I was looking for the familial, communal way of living that I had been devoid of during lockdown. I wanted energy, warmth -to be awoken from the black and grey grips of isolation. The way the stranger who had described Oaxaca to me 5 years ago could not have come at a better time, and I needed the rosy tone in his complexion now more than ever.

Usually, it all starts with an intense feeling that inspires me to document. The intensity of the feeling began to develop as I was arranging my itinerary. Personal preference, but I prefer not to embark on typical touristic activities. I’d rather meet the people who have bred, fostered, loved, and still love their land and their people. I cold emailed a man, Tomas Ramirez, who used to do educational mezcal tours for a living, to see if he was free for a Thursday afternoon for a drive out to the farms in exchange for a meal and some pesos. I cold called a non-profit organization that supported local Oaxacan women to ask if they needed a photographer for a day – I ended up tagging along with them to the villages to deliver baby chicks. I think there is something so powerful about capturing and showing your appreciation for a culture outside of your own. To me as an individual it is a willingness to learn, expansion of one’s way of thinking, and a display of multi-culturalism. To the subject, it is my gift to them – as a display of their beauty and reflection of my gratitude for allowing me into their space.

One photo I remember quite fondly was the one I took of an elderly man biting into his quesadilla on the corner of the street. Tomas had just dropped me off, after a few shots of mezcal, and I was strolling happily down a crowded street by Mercado Benito Juárez. I saw this man indulging in his morsel of fine delicacy, leaning against the faded yellow wall, looking out to stream of people flowing in the intersection. This scene told me that either he was living in a second of time amongst mundanity, just taking his lunch break on the same old corner – or he was lost in utter bliss at the simplistic but sweet piquancy of the beloved dish of his homeland. Whatever it was, I wanted to capture it and let anyone who viewed it interpret his story. He knew I took the shot, and for one second as I shyly smiled and put away my camera, he smiled with so much kindness back at me. For that one second and every moment afterward, I felt the people of Oaxaca’s warmth – assuring me that I’m welcome here and part of their community.