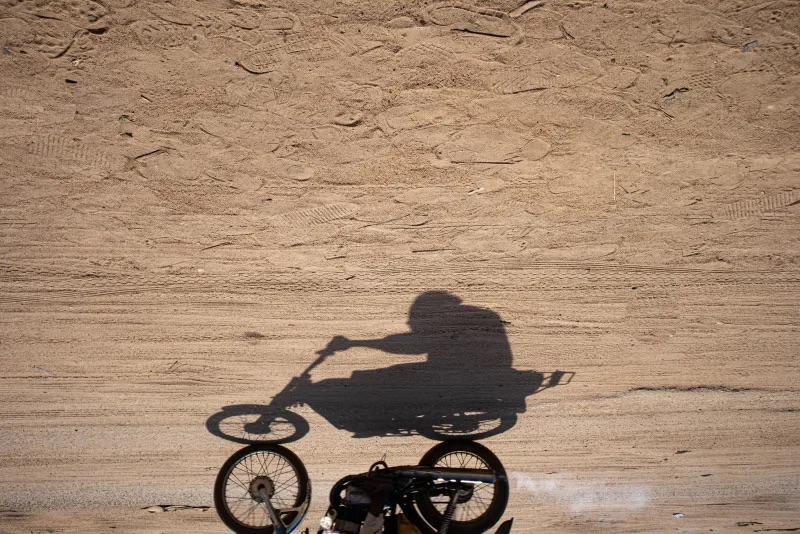 The dusty road stretched on for miles. Drops of sweat trailed down to my camera’s viewfinder and my knees were starting to ache a bit, but I wasn’t giving up now. Undeterred, I continued down the dusty trail to Kaiama.

Originally, I came to the Kwara state of Nigeria on a five-day assignment, when I stumbled upon Kaiama though, I knew I had to stay longer. I spent an extra two days documenting this unusual town, though I would have loved to stay much longer.

The reason I found this place so intriguing was that it quickly became evident Kaiama has a strongly entrenched motorcycle culture. Everyone rides, men, women, school children, and everyone is proud of their motorbike. I stayed by the roadside and would wait 15-20 minutes each day for someone on a motorbike to take me into town. Although many motorbikes zoomed by, only a handful were willing to serve as my taxi.

In Lagos, where I’m from, motorcycles are generally used only for commercial purposes, mostly by men, and are only owned by those of the middle class, so the many motorbikes in Kaiama was quite a change for me.

As I documented this two-wheeled culture, I found that Kaiama is known for her soya bean cultivation. It’s a cash crop with high yield and quick revenue generation. A good percentage of the profits goes to indirect taxation, but it’s still worthwhile for people to cultivate. Yet, like most local provinces in Nigeria, the infrastructure and road network of this community is in a bad state. People are forced to improvise to transport their goods and here, motorcycles are the vehicle of choice.

It’s also fascinating that so many women could be seen driving motorcycles too. In our country, Islam and the culture in general would usually dictate that motorcycles are a man’s form of transportation, but not in Kaiama.

Surrounded by a whole community of motorbike riders, I was struck by the way the sun gleamed on their bikes and the strong shadows they cast on the ground. But it wasn’t just the aesthetic that drew me in. It was clear there is a deeper story to be told here. While Kaiama is still stranded in the debacle of government neglect, I hope that bringing effective change is possible through documentation and factual publications. This is one such record, created by spending my days taking pictures, interviewing people, and doing other field work to gather the information necessary to impulse a change.