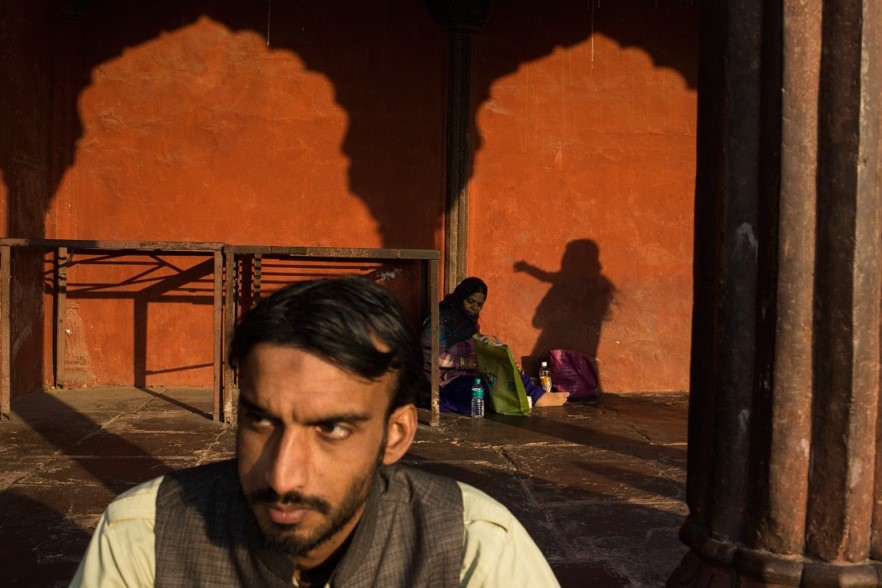 History of the Mosque

Jama Masjid, Delhi was built by the Mughal emperor Shah Jahan between 1644 and 1656. It cost one million Rupees and was inaugurated by an imam from Bukhara (the present-day Uzbekistan). It is the largest mosque in India and was constructed by more than 5000 workers. It was originally called Masjid-i-Jahan-Numa, meaning ‘mosque commanding view of the world’. The construction was completed under the supervision of Saadullah Khan, the wazir (or prime minister) during Shah Jahan’s rule.

More info about Jama Masjid is available from Wikipedia.

Why did I Start this Project?

I was born into the Hindu religion. Generally in India, Hindus do not go to a mosque, except maybe travel guide operators, history students, although now I can say some photographers also go inside; visiting a mosque for Hindus is generally taboo! Let me put it this way: none of my non-photography friends or relatives have ever been inside a mosque! But now, I do have some pending requests from friends to take them along next time I visit Jama Masjid.

Inspired by Steve McCurry’s mosque photos, I conducted my own survey of Jama Masjid. I knew it would be a very unpredictable journey for me. I am no longer a child; I am 33 years old and I have never been inside that mosque, despite it being a landmark for tourists and me living approximately 10 kilometres away.

At first, I did not raise my camera. I just observed. I smiled at people and was quite reluctant to take some photographs or get close to people. I remember that some women wearing Burkha did raise their hands saying “no photographs”, and I was asked to go outside when people were offering prayers inside the hall.

Despite these initial hiccups I continued my journey pretending to be another tourist and took some simple tourist shots. However, I knew that wasn’t what I wanted from here. I needed to see this place as an insider in order to be able to tell the real story of what goes inside Jama Masjid.

Over time I became very comfortable and determined to continue with my project and show my story of what happens inside this celebrated and important aspect of Delhi life.

Jama Masjid is a major tourist spot and has been over photographed in terms of architecture, travel shots and souvenir shots, so I immediately thought of moving away from clichés. 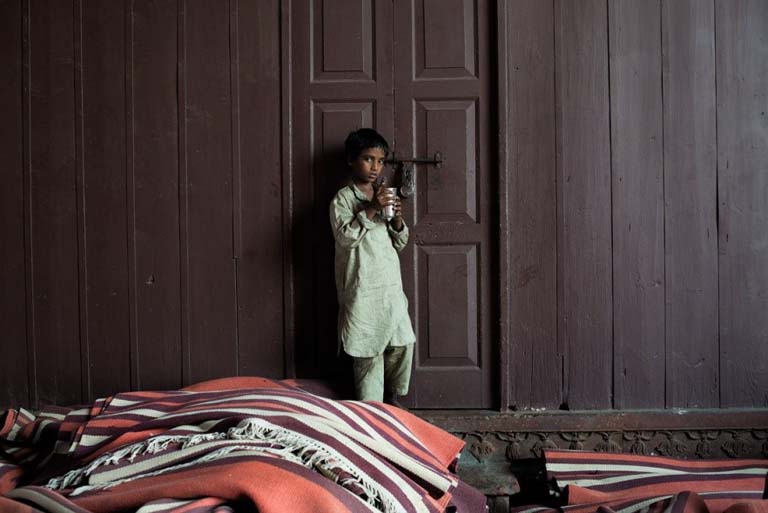 I learnt that, in addition to being a place of worship, the mosque is also a major picnic spot as well; it is a social gathering spot for Muslim families that inhabit the Old Delhi area, especially in the vicinity of the mosque.

Like other places to offer prayers in India, wearing shoes inside the premises is not allowed, but if you leave your shoes outside they will be gone in seconds. So, I tied up my shoe laces together and hung them on side of my sling camera bag and walked barefoot for entire two year’s visit to shoot this project. 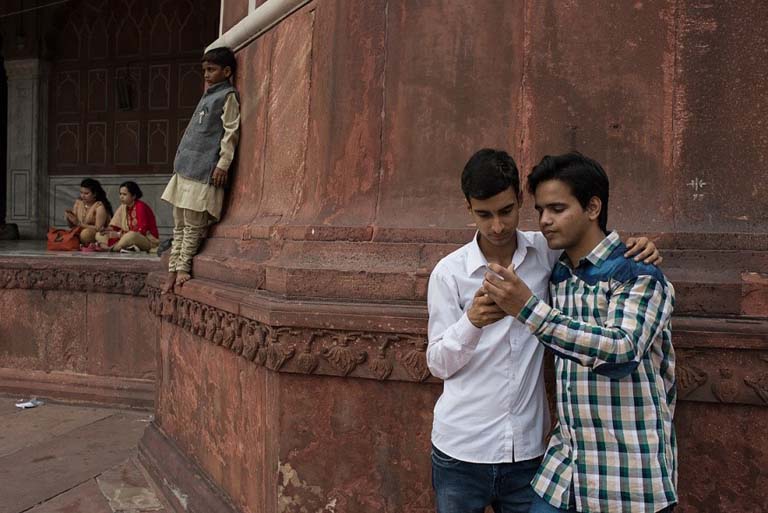 Hundreds and thousands of meat shops can be found in the vicinity of Jama Masjid. Cats sneak in for some extras. Women generally cover their faces with a veil or they wear a burkha . 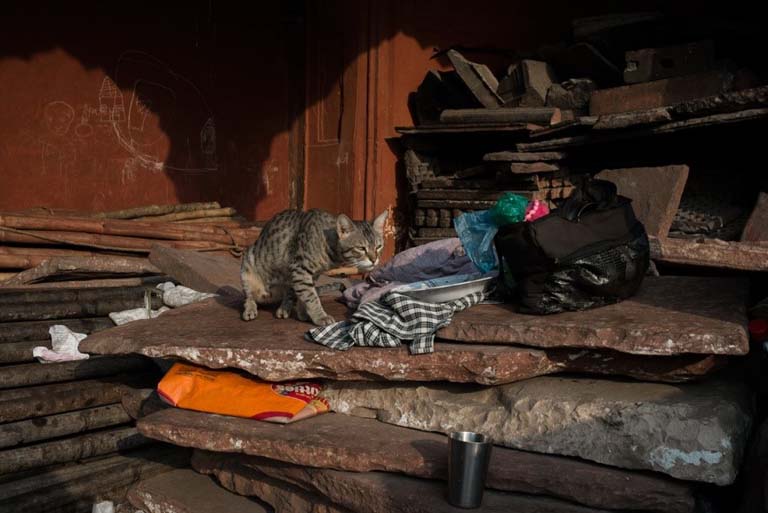 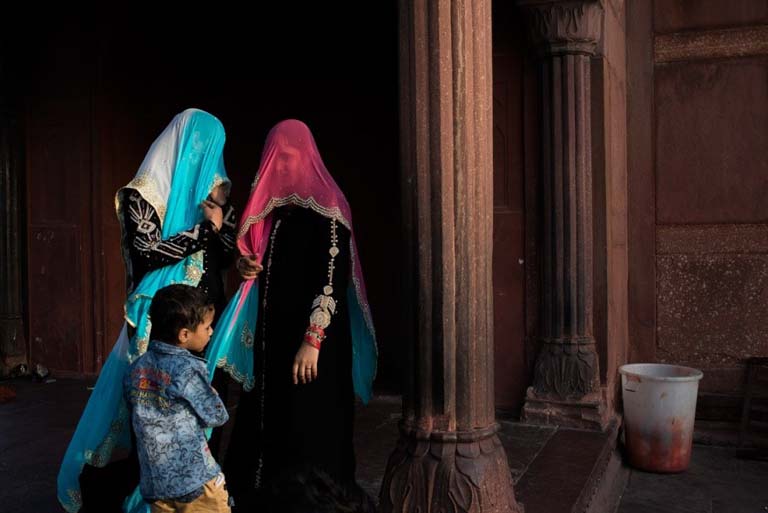 Running water taps are in a line so that worshippers can conduct their ablutions before offering prayers; there is a separate queue for men and women. People without homes do come in to ask for food in alms or spend their day in here. 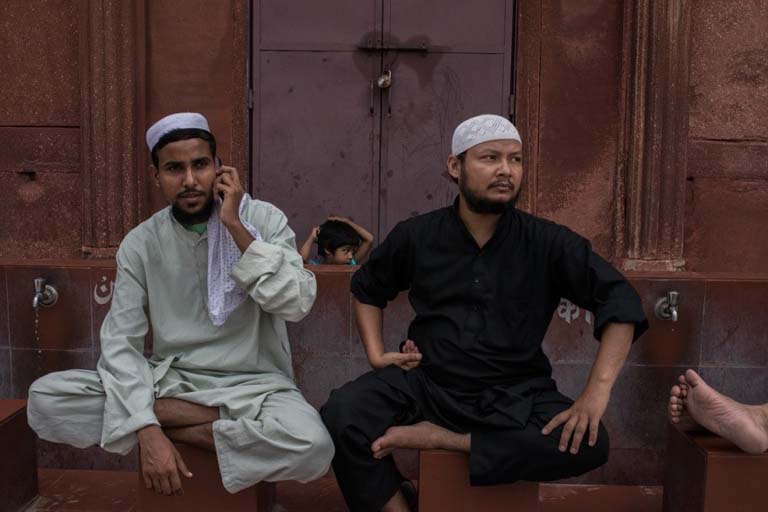 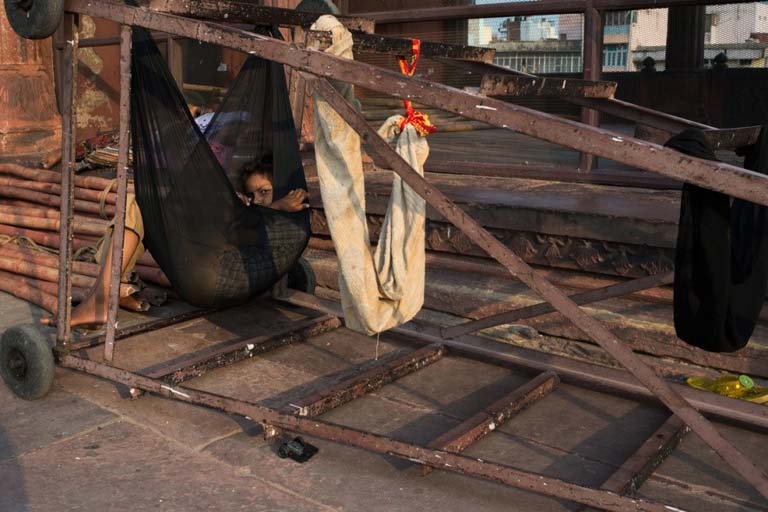 Children seen playing in the shade and seem to enjoy it more as a playground, rather than a prayer offering spot. After all, children tend to be freer at heart. 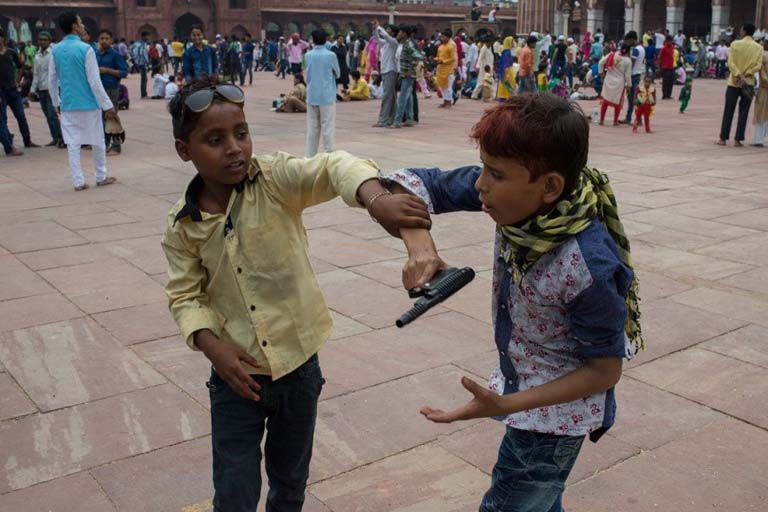 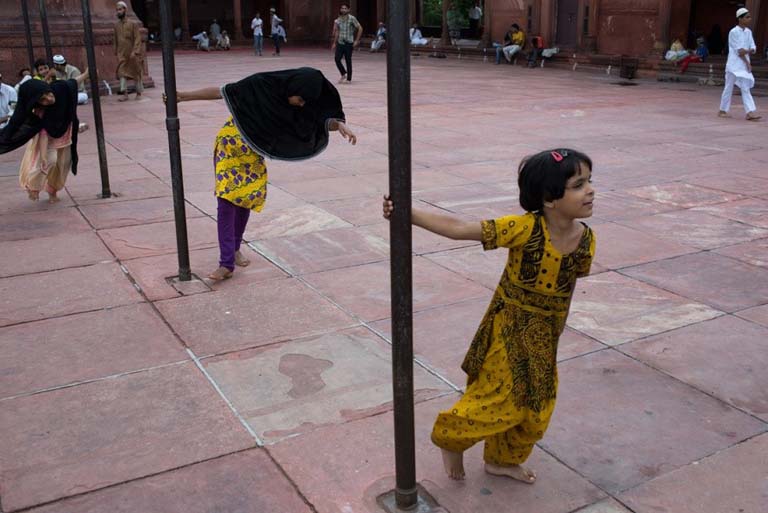 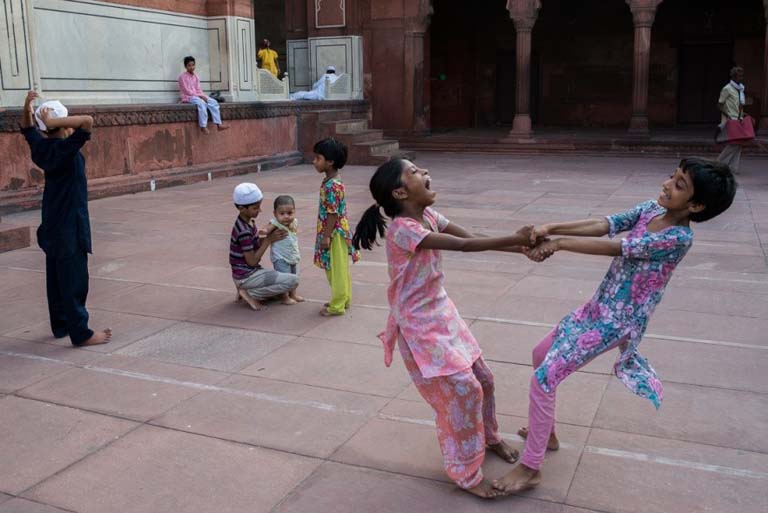 The mosque is made of red sandstone, and so the effect of the evening light is like magic. 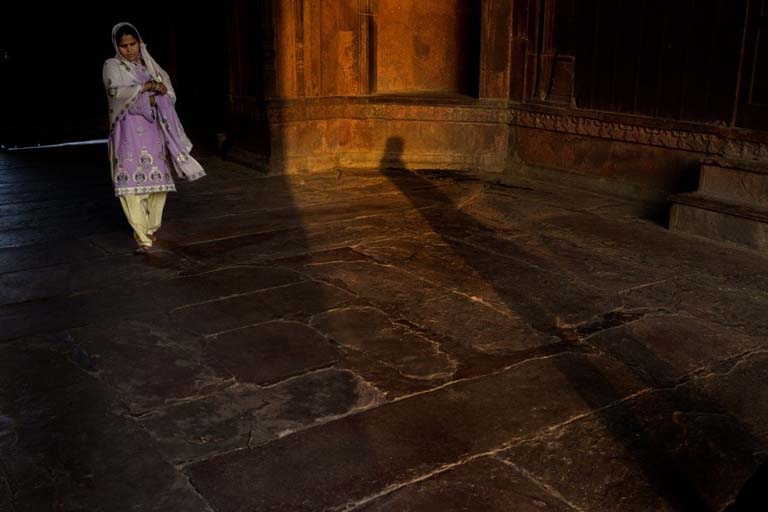 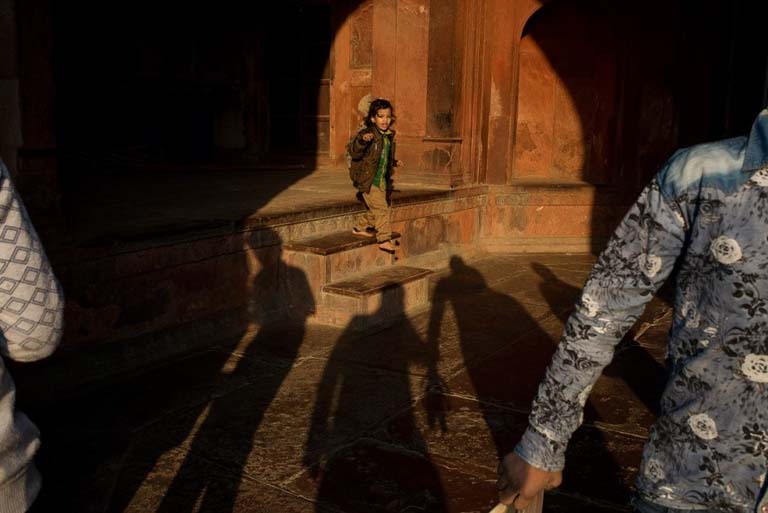 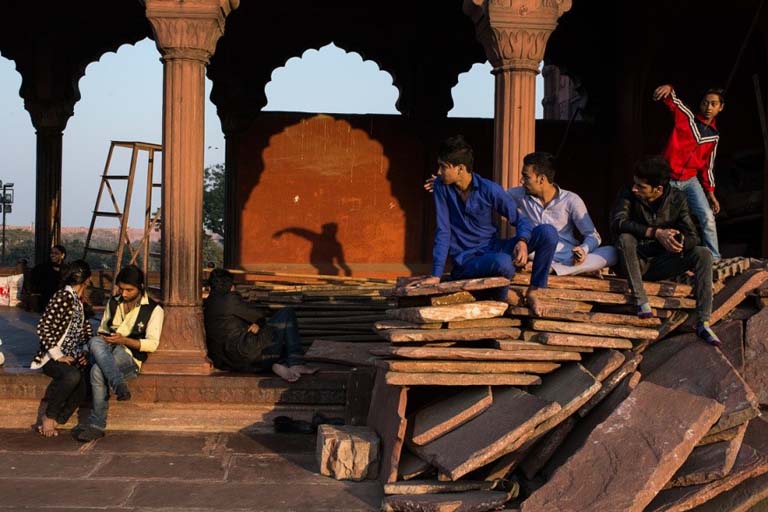 After this experience, I am left with mixed feelings: Jama Masjid is of course a place of worship for the Muslim religion, but it also offers easy access and welcomes tourists, although they are asked to leave during prayer time. It’s a place that combines an intriguing mix of relaxation and energy, discovery and privacy, light and shade.

The real beauty for me is that photography takes me to places I would have never gone to before, and because of that Jama Masjid revealed some of its secrets to me.